01 Aug Dining Out: The Continental Divide

Chris Murphy was 13 when he started washing dishes at the Continental Divide, and he went on to wait tables there through college. Back then, in the late 1980s and ’90s, it was a hole-in-the-wall, with 10 tables and a bar next door where you could order a cocktail to go. The restaurant wasn’t open year-round, and there were maybe five things on the menu on any given night. But the clientele traveled from across the country, and indeed the world, to sit in that tiny place and have Jay Bentley cook for them. Regulars included Ted Turner and Jane Fonda, actor Sam Elliot, and journalist Tom Brokaw. “Governor Ann Richards ate there. And Jimmy Carter and John Denver shared a table one night,” says Murphy, now a realtor with Benchmark Real Estate Brokers in his hometown of Ennis. “It was the iconic place in those days.” 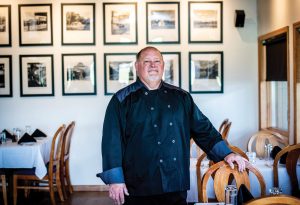 Chef John Kulon looked at a lot of menus from Montana restaurants before creating something “different” for the Continental Divide.

Before the Continental Divide, fine dining in these parts consisted mostly of overcooked steaks. Anglers looked for bars when they came off the Madison River, and if they got lucky, there was a hamburger served with jojo potatoes somewhere. But at the Continental Divide, there were almost always sweetbreads on the menu, and escargot. There was a raspberry salmon and Bentley’s famed 3-inch-thick pork chop. The steaks came from local ranches and the vegetables were grown nearby. Hamburgers were not served there.

“It was definitely an upscale restaurant,” says Karen Rice, who — with her husband — raises beef on a nearby ranch and has been dining at the Continental Divide since the beginning. “There weren’t many places around that had white tablecloths,” she laughs, explaining that it was a high-dollar, special-occasion place for locals, and a big draw for visitors to the region. And it was always wonderful. “Jay was the consummate host,” she adds. 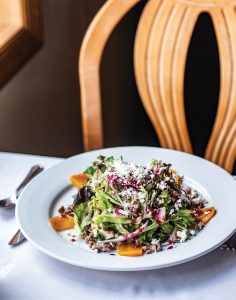 In June 2022, the Continental Divide re-opened in Ennis for its 40th season. The current owner — serial entrepreneur, fashion merchandising mogul, adventurer, and author Jan Janura — was one of the regulars back in the day. “I took my friends there all the time,” he says. “Jay Bentley was an absolute wild man. I told people I loved going because you got a floor show with your meal.”

After he sold the restaurant to chef Eric Trapp in 1999, Bentley went on to open other iconic establishments in the region: The Mint Bar & Grill in Belgrade and, more recently, Open Range in Bozeman. But the Continental Divide didn’t go away. 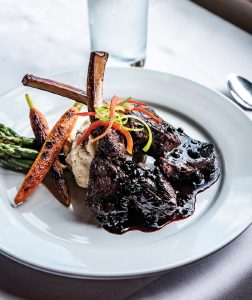 The Divide’s elk loin chop is a classic dish that’s served with a huckleberry bourbon glaze.

During his 18-year tenure, Trapp moved the restaurant from its humble origins on East Main Street to a new, larger building north of downtown, with outdoor seating and a front-row view of Fan Mountain. The menu grew under Trapp, but the clientele — including Janura — mostly stayed loyal. “He was a great chef,” says Janura of Trapp, “and a great jazz trombonist.” Anglers and visitors flocked there every summer for his locavore entrees with French flair.

In 2017, when the Continental Divide came up for sale, Janura and his wife (and longtime business partner) Carol Anderson stepped up. “I had no interest in owning a restaurant,” says Janura, who owns several Ennis businesses with Anderson with the goal of creating well-paying jobs in town. The couple lives on a ranch nearby. “I’ve been in the apparel business, which is a really tough business to begin with,” he says, citing a statistic from The Business of Fashion that apparel companies have the same life expectancy as restaurants: “Which is nine months,” Janura laughs. “But I knew Ennis needed a great place, and that’s why I bought it.” 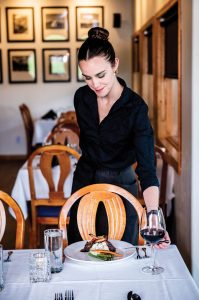 The service at the Continental Divide is both elegant and friendly.

Still, it hasn’t been easy. After four different chefs in as many years, Janura found John Kulon. “My goal is to bring the Continental Divide back,” says Kulon, who has managed and cheffed at restaurants and resorts across the country since he graduated from the Culinary Institute of America in 1987. “My whole goal is to make people happy,” he says.

Kulon is doing just that with a diverse menu and an ever-growing, award-winning wine list. From cumin-scented scallops with jalapeno-cheddar polenta, chipotle aioli, and cilantro oil, to wild mushroom arancini, to West Coast oysters in the shell with cilantro-yuzu mignonette and tobiko caviar, Kulon’s starters are as flavorful as they are beautiful. Everything, right down to the lavender-honey butter and bacon jam, is house-made. The second-course offerings include salads ranging from roasted yellow beets with jalapeno-huckleberry vinaigrette to the Divide Wedge of grilled romaine, applewood bacon, and Spanish blue cheese.

And then there are the entrees.

It wouldn’t be the Continental Divide without beef. There’s a Montana Angus filet mignon, a 12-ounce New York steak, and a more unusual cut, but one of Kulon’s favorites: the 10-ounce Montana Angus bavette. “It’s known as the butcher’s cut,” Kulon says, using his hands to point it out on an imaginary cow, “because it’s the piece the butchers take home for their own families. It’s the best piece of meat, but one of the hardest to cut, and tricky to cook.” When mine comes to the table, it’s simple, dressed only with a red wine demi-glace. And it’s almost too pretty to cut. Like Kulon said it would be, the meat is tender and flavorful. “It’s perfect,” I tell him. 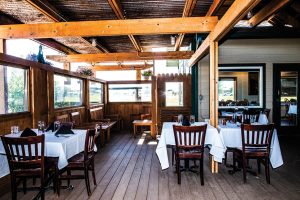 Many of the restaurant’s 64 seats are on the covered back patio, which features spectacular mountain views.

As a playful homage to Bentley and the old days, Janura asked Kulon to add a hamburger to the menu — the Bentley Burger. “Make it as outrageous as the restaurant’s founder,” he said. On top of the Wagyu beef, Kulon piles crispy pancetta, grilled portobello, fried green tomato, Spanish blue cheese, and bacon jam. Wanting the concoction to be decadent and unexpected, Kulon tops it off with a foie gras-buttered ciabatta bun.

In addition to their beef offerings — Kulon is working toward stacking the menu with local Wagyu options — the Continental Divide offers bison hanger steak, elk loin chops, and a variety of seafood, including Alaskan king crab and cold water lobster tail. Rounding out the menu are various pasta dishes, wild walleye, and crispy duck. The recipes aren’t overly complicated, but they’ve been honed until each one tastes exactly the way Kulon wants it to.

Not unlike Bentley, Kulon is always happy to step out of the kitchen and visit with diners. When they ask, he doesn’t hesitate to share a recipe. “The food I prepare is a derivation of something someone taught me,” says Kulon. “I’m just paying it forward.”

The restaurant’s longevity means something to longtime locals like Murphy, the dishwasher-turned-waiter-turned-realtor, who explains that the Continental Divide has been an important part of the Madison Valley since its origins. “We are thrilled to have such an amazing culinary destination in our own backyard,” he says. 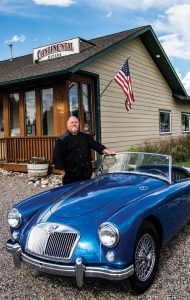 Kulon’s shiny blue MG was a gift from his father to his mother when the chef was just ﬁve years old. He was delighted to drive it in the Ennis 4th of July parade, where he threw chocolate bars to the crowd.

Together, Kulon and Janura are rebuilding an icon, starting with the food, and refining the culture. It’s still a white tablecloth kind of place, but Kulon wants to welcome everyone — from anglers and tourists to longtime residents and Bozemanites — even the hamburger crowd. It’s too soon to say if every table will be filled like in the old days, but crowds the first few weeks since opening bode well. And Kulon is an optimist. In a matter of days, the salmon flies will start hatching on the Madison River and Chef Kulon is ordering ingredients accordingly. “We’ll plan for busy, and go from there,” he says.

Carter Walker was the very first intern at Big Sky Journal in 1993, the same summer she first ate at the Continental Divide. Walker is a writer, editor, and mother. She lives with her daughters and an ever-growing menagerie of animals on an old homestead in the Horseshoe Hills.