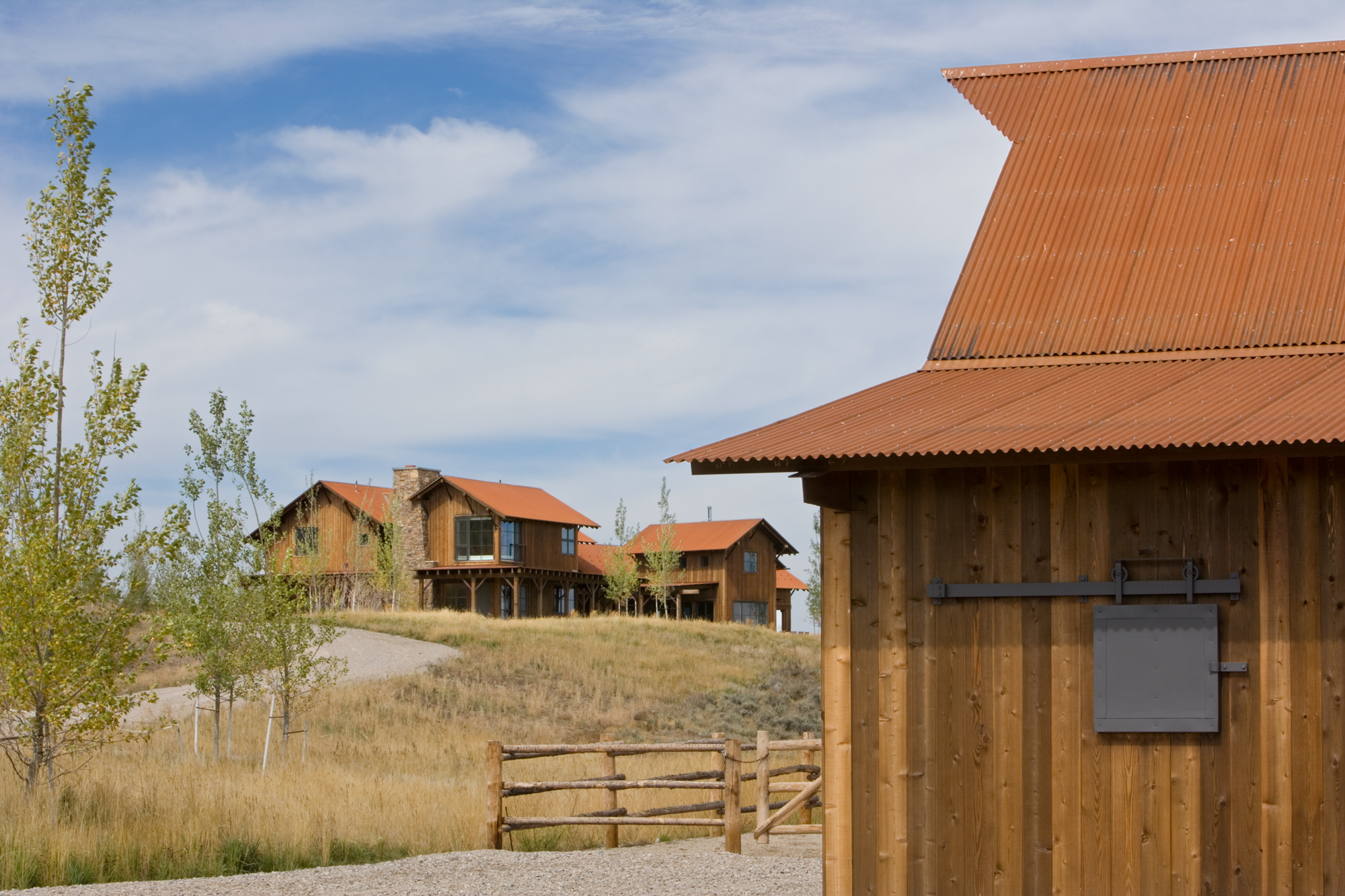 TURNING OFF WYOMING 354 into the Double J Ranch, there’s an eagle perched on a fence post. As my car passes, it takes flight toward the Wyoming Range, only a few miles to the west. Following the gravel driveway southeast as it winds for a mile towards the main house and working ranch buildings, my passing sends sage grouse scurrying into the willows.

A bridge crosses a wetland area, curves, and then the heart of this working ranch pops into view: an equipment shed, a barn, the main house, and a pond lined with historic log cabins. Idyllic doesn’t even begin to describe the scene.

“It was love at first sight,” JJ Healy says. His first time here Healy wasn’t greeted by an eagle, but by a mule deer. “Driving up to what was the main house at the time, there were these enormous antlers sticking out of the sage,” he says. “That got me focused.”

Healy bought this ranch knowing next to nothing about ranching, other than it had been a dream of his since shortly after college. Post-college, Healy had worked as a ski coach in New Zealand. While there, he also worked on a sheep station. “That was my intro to agriculture,” he says. “Right then, I decided that if a miracle ever came into my life and it became a possibility, I’d get a cattle ranch.” After 10 years working in mergers and acquisitions for the likes of First Boston Investment Bank and Yahoo! Healy realized that his miracle had happened.

Healy had been looking for a working ranch property for two years before happening upon this one between the Wind Rivers and the Wyoming Range just west of Daniel Junction. Still an avid skier, Healy was looking for ranches within 90 minutes of a major ski area so he concentrated his efforts in Wyoming, Idaho and Montana. Jackson Hole Mountain Resort is just over an hour away.

As soon as he bought the property, Healy began interviewing architects. The job wasn’t merely to design a home, but also all of the accessory structures required by a working ranch — a barn, a home for the ranch manager, an equipment shed. Healy clicked with Jackson-based John Carney, a founding principal of Carney Logan Burke, because of Carney’s own ranch background. Carney’s family has a ranch on the Green River, only a handful of miles as the crow flies from the Double J.

The Double J came with a main house and outbuildings. No one had lived in the house since 1961 though. Healy invited the Daniel Fire Department to demolish it for training. Some of the buildings — an historic chicken house, a shed barn — were saved and moved around the property to serve as visual interest.

“The ranch was sort of a tabula rasa,” Carney says. “We had to design the entire flow.” Healy says the neighbors were concerned the ranch would get developed when he first bought the property. “I wanted to do the exact opposite though — turn it back into a working family cattle ranch,” he says.

Healy and Carney spent hours walking around the property working out the siting. “Figuring out where the house wanted to be sited was more of a fun exercise than a challenge, but we wanted to get it absolutely right,” Carney says. “For [Carney Logan Burke], siting is one of the smart moves you make that can completely transform a project. It is such an important element that leads to the ultimate success — or failure — of a project.”

It was decided the main house would sit on a small hill above the willows where the original ranch house was. The road to the compound was re-routed to meander through willows and pass over a stream. Driving up the new road, before arriving at the main house, you pass the barn and equipment shed and then the ranch manager’s home.

“There was never any doubt about this being a working ranch. JJ really embraced this western landscape and lifestyle,” Carney says. “But he didn’t forget where he came from.” One look at the main home’s screened porch, the vertical exterior siding, the colorfully painted walls, and the trusswork in the great room and Healy’s Nantucket roots are apparent.

But even with the nods to Healy’s East Coast roots, there is no doubt this is a ranch house in Wyoming. Three materials make up the exterior: rusted metal, Montana moss rock and wood siding. Inside, oversized windows in the great room frame the Wind Rivers and the Wyoming Range in the distance. Sage and grasses — or, in winter, an open expanse of snow — dominate the foreground. Above, clerestory windows let in additional light and glimpses of blue sky. Below, window seats run almost the entire length of the living room. Willow Creek Interior Design, a Jackson-based firm, furnished the house with colorful, comfortable pieces that let the architecture shine. Someone in the Carney Logan Burke office christened Double J’s design “Pinetucket.”

“Traditional ranch houses — and ranches — were often built piecemeal and they were very practical,” Carney says. The 6,000 square foot Double J main house has no grand staircase. It does have “various little destinations where people can gather and relax,” says Healy. And it has a kitchen that invites “total participation from everyone. Whether it’s just the family or if we have groups of friends over, we’re all prepping, making, and cleaning up together in the kitchen.” The most un-ranch thing is a modest wine room next to the kitchen. “It’s not a small house, but it’s not big either,” Carney says.

“The Double J combined all the high-end finishes and fixtures that a large custom home requires along with the functionality of buildings that serve the purposes of a ranch,” says Paul Sheridan, who was On Site Management’s project manager for the Double J and is now OSM’s director of Jackson operations. “It was really unique for that.”

Today Healy, wife Julia and their two kids, ages two and four, are fully settled into ranch life. “We run about 175 mother cows with a cow/calf operation,” Healy says. “We’ve got horses. We cut our own hay and feed that hay to the cattle in the winter with draft horses.”

The neighbors who had feared Healy would develop the property now help him move cows, and he helps them do the same. He and Julia, who got married on the ranch, have had their son’s pre-school class out for bonfires and roasting marshmallows. They hosted a group from the Western Sage Grouse Initiative last summer and allow the Wyoming Land Trust to use historic log cabins they moved to the ranch from the old Sagebrush Motel in downtown Jackson.

“One of the original intents of the ranch, besides fulfilling a dream of mine, was for it to be a place for friends and family to come together,” JJ says. “Our lives are so busy nowadays, getting together for a dinner isn’t enough.” 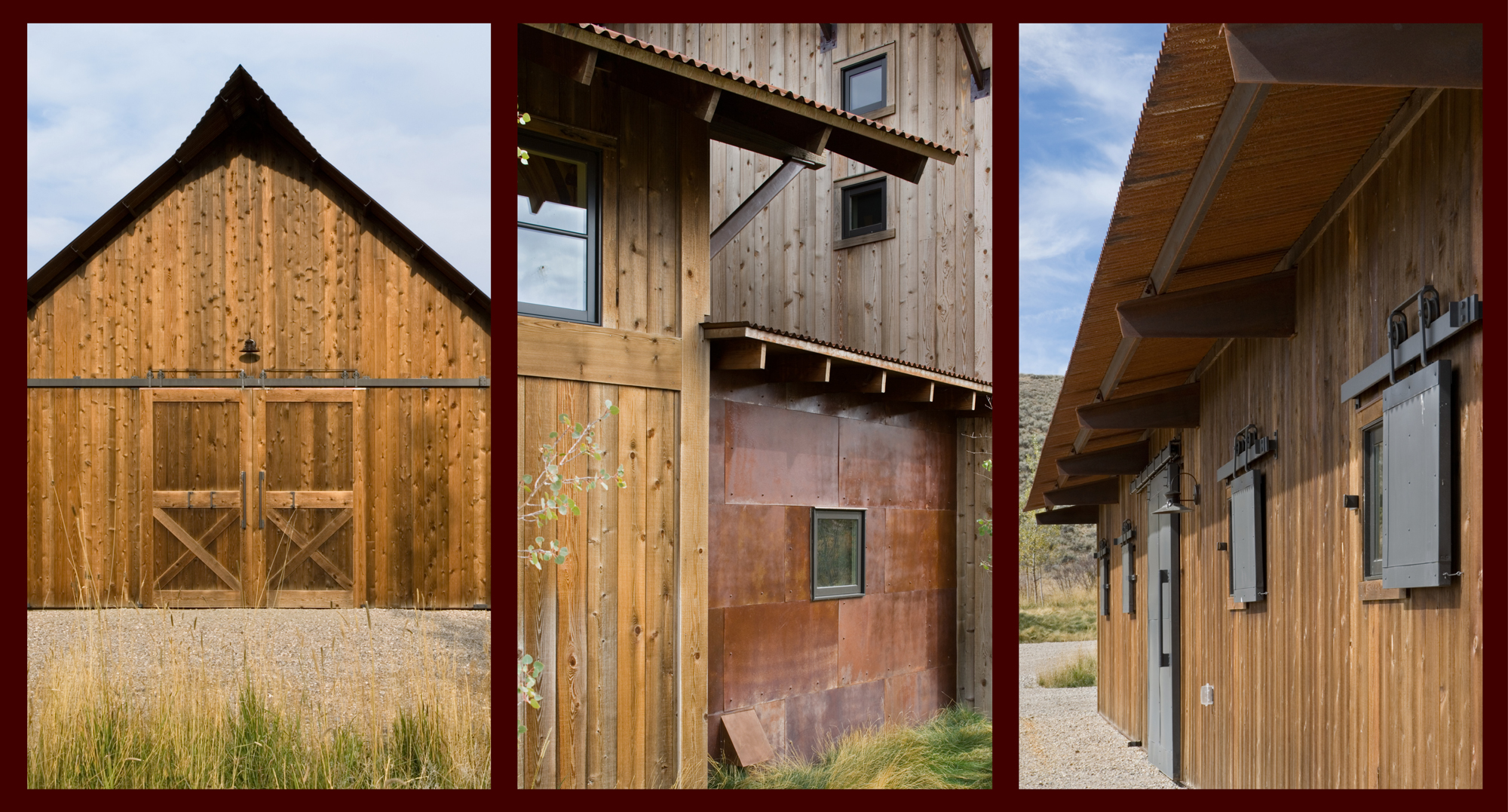 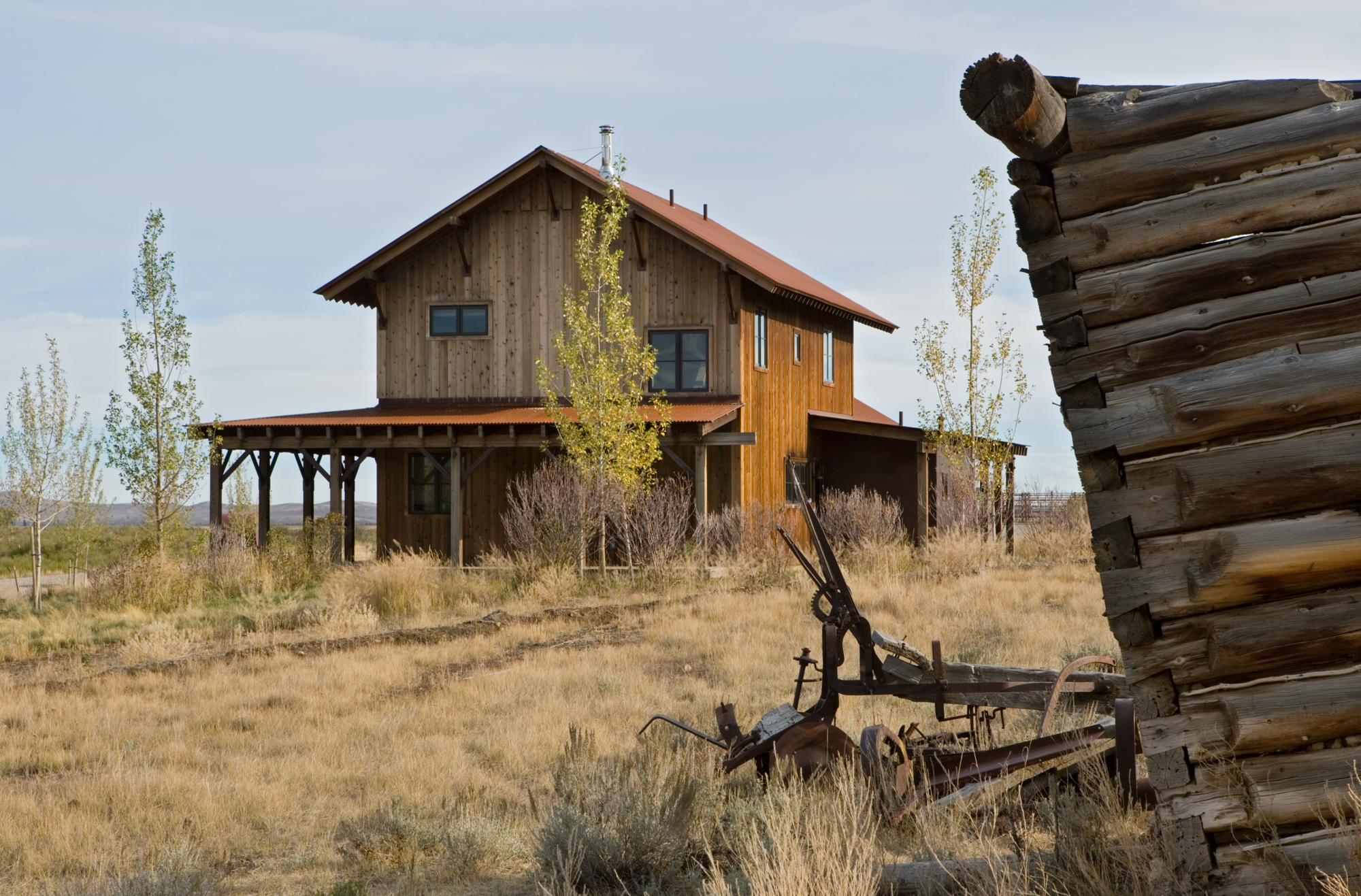 The ranch manager’s home sits just below the main house. 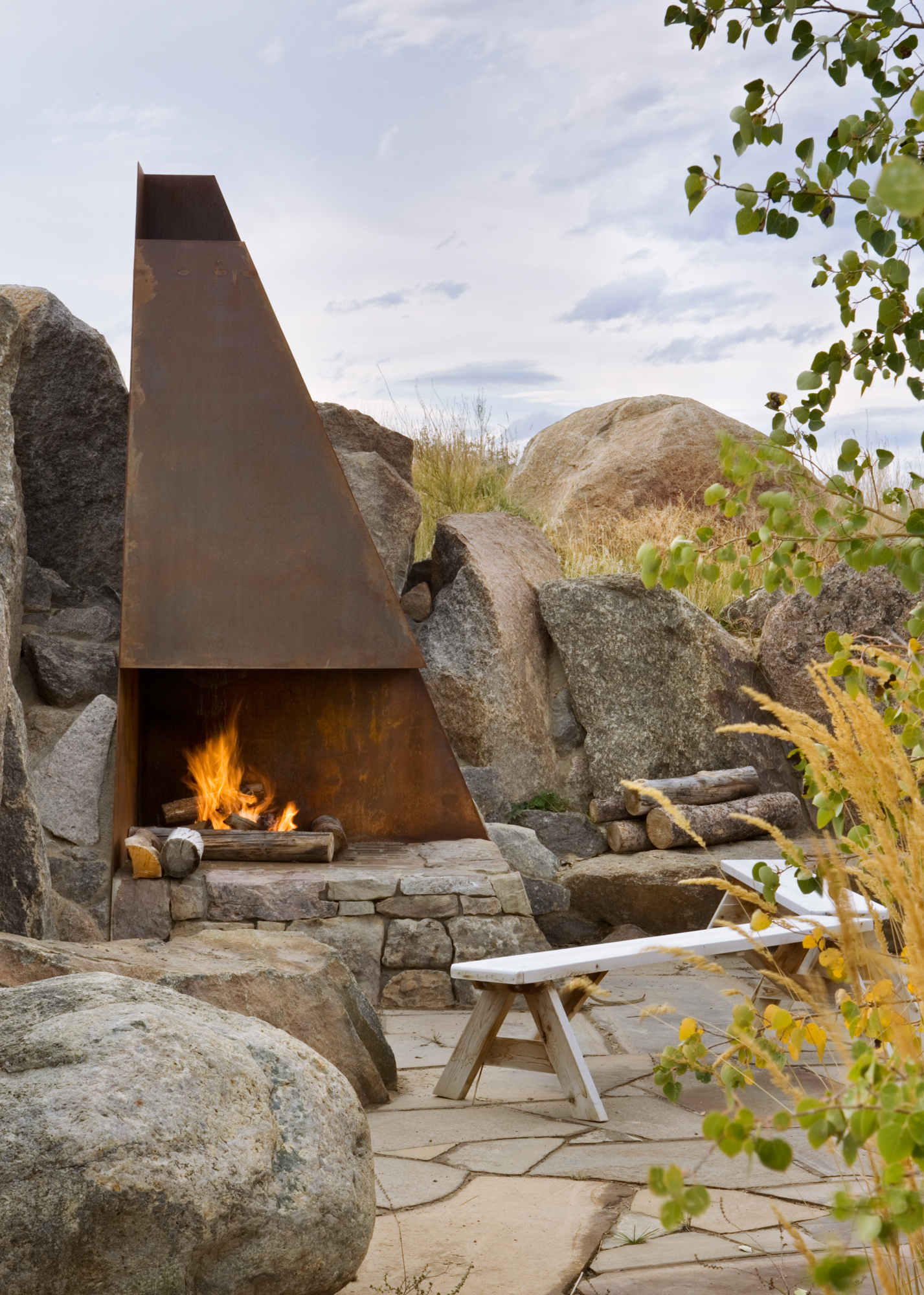 There are outdoor spaces to congregate at throughout the ranch. 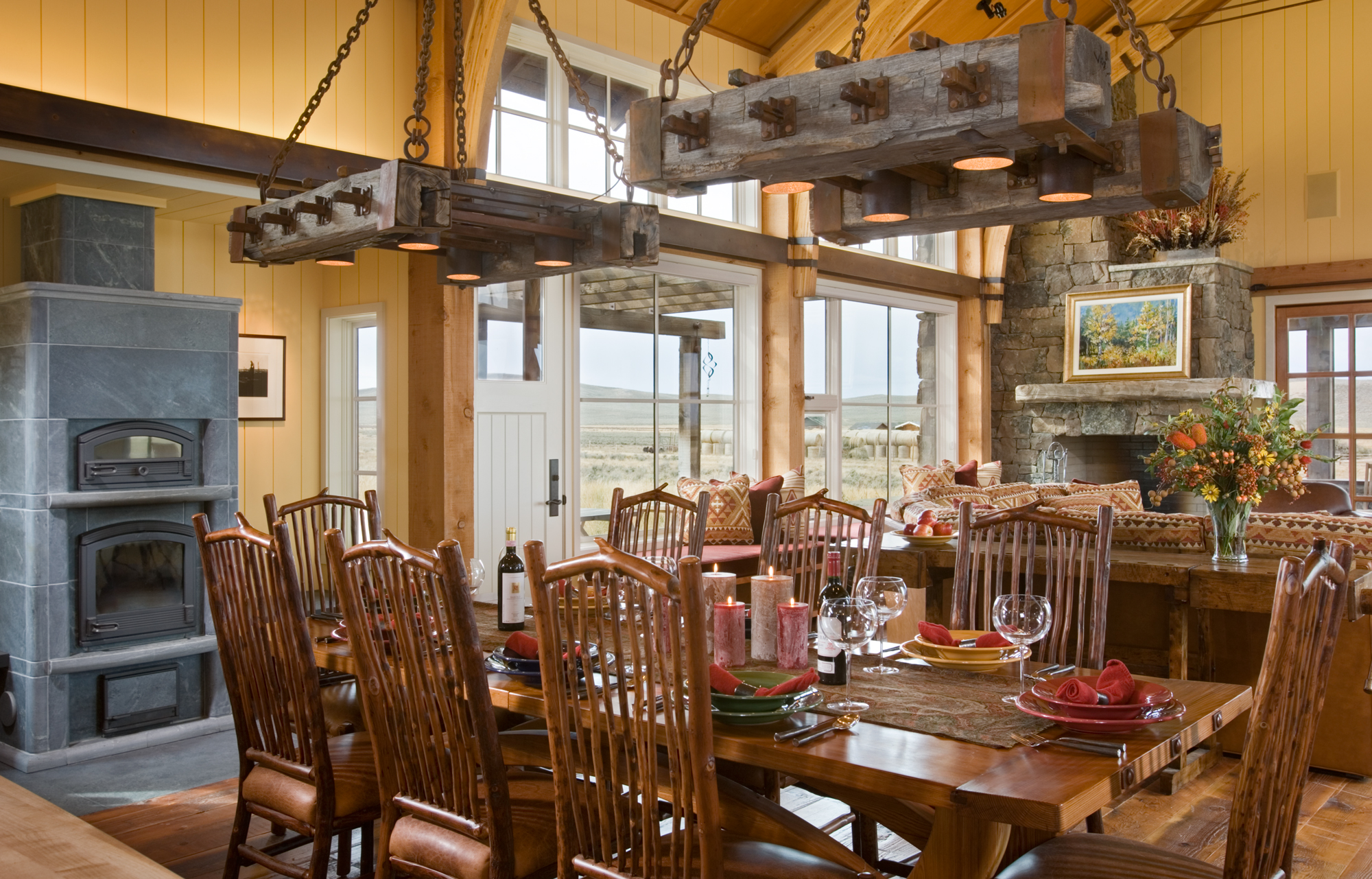 Inside, contemporary luxuries such as the Tulikivi soapstone fireplace complement the rustic style. 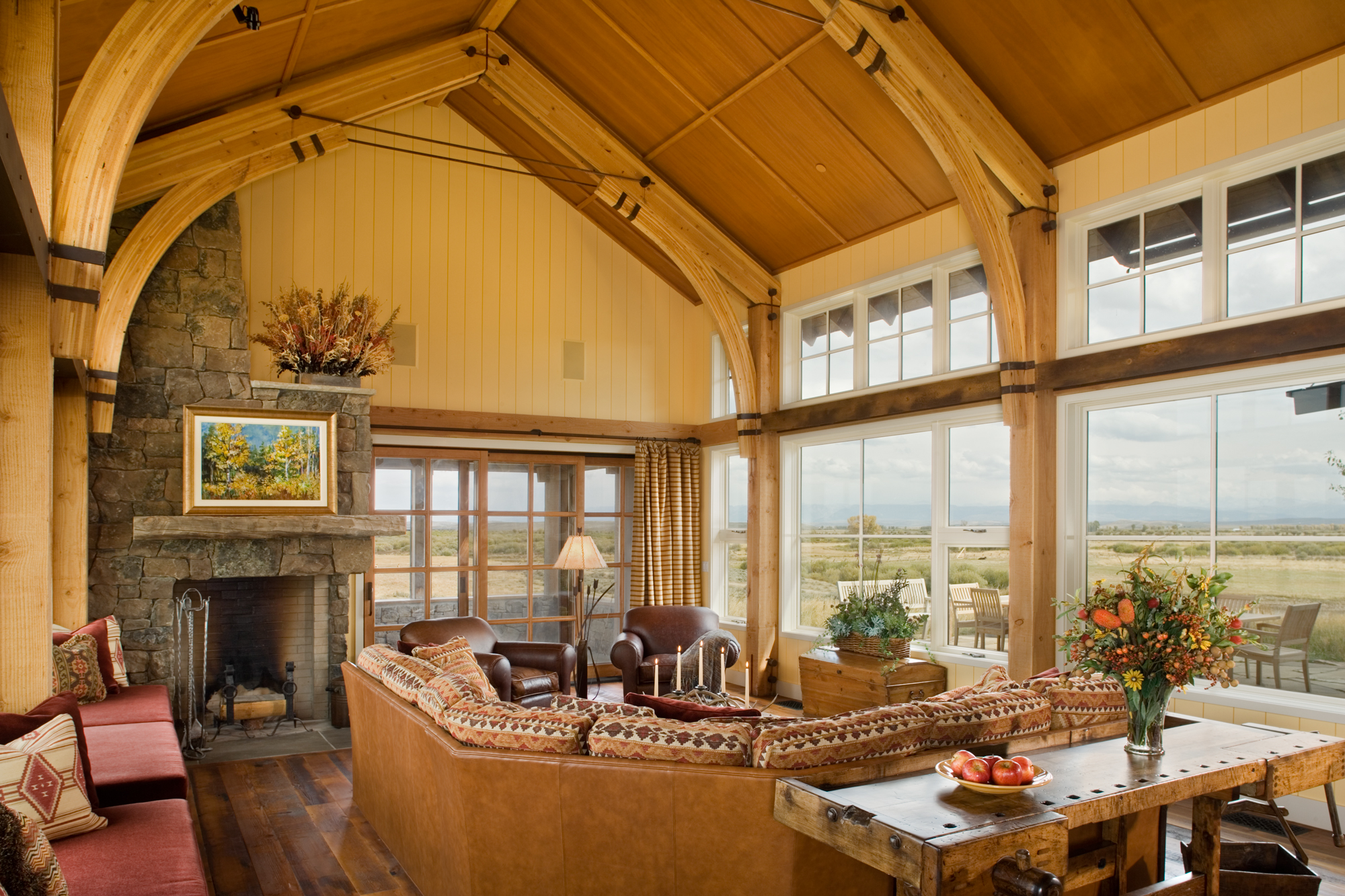 The colorful walls and arching ceiling in the great room pay tribute to JJ’s Eastern roots. In contrast to the rustic nature of the surrounding ranch buildings Carney Logan Burke designed a refined interior with contemporary brightness. 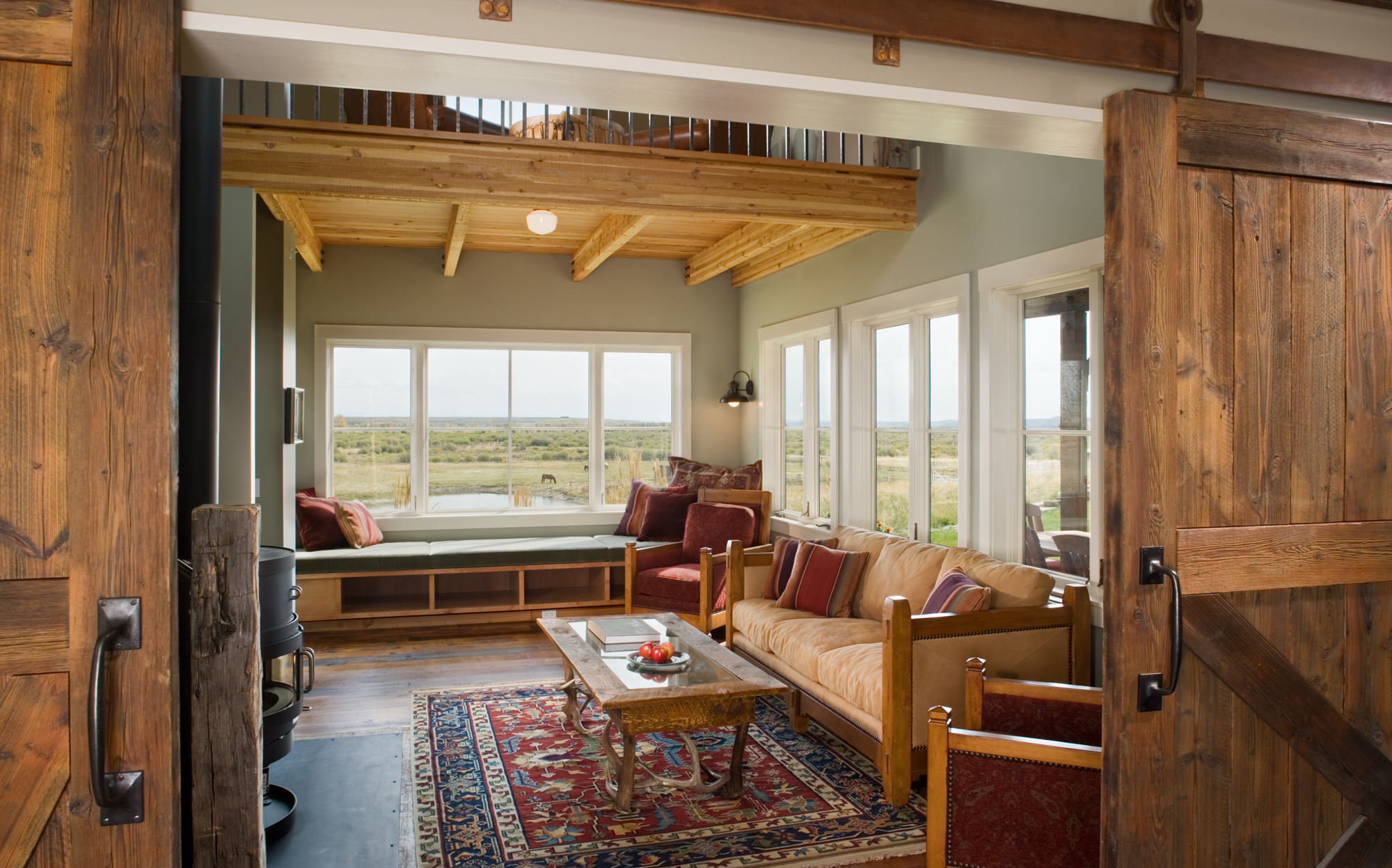 Willow Creek Interior Design worked with JJ and Julia to create a comfortable, cozy atmosphere. “Every time I walk into the kitchen and great room, even now, I smile. It’s just so perfect,” JJ Healy says. 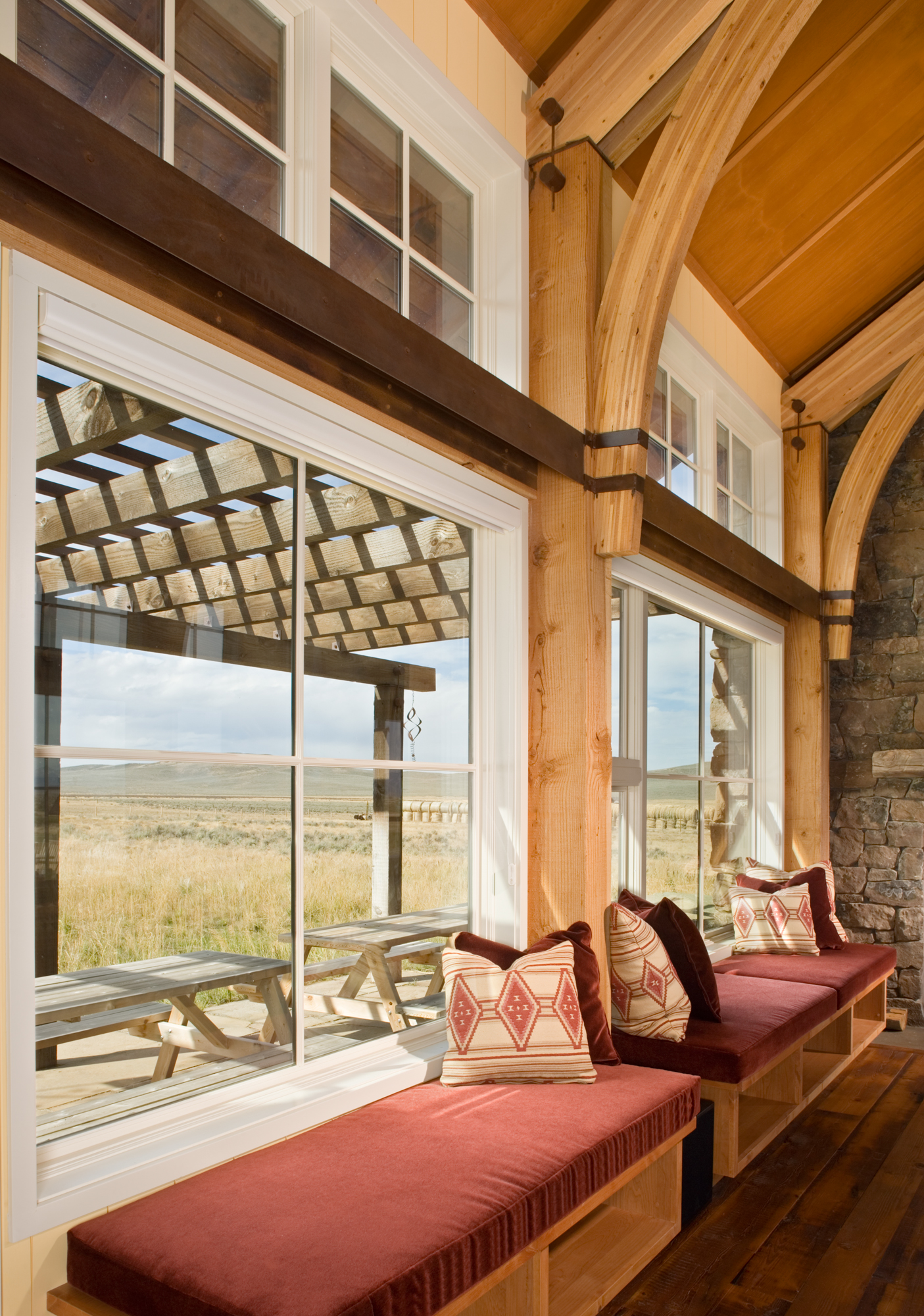