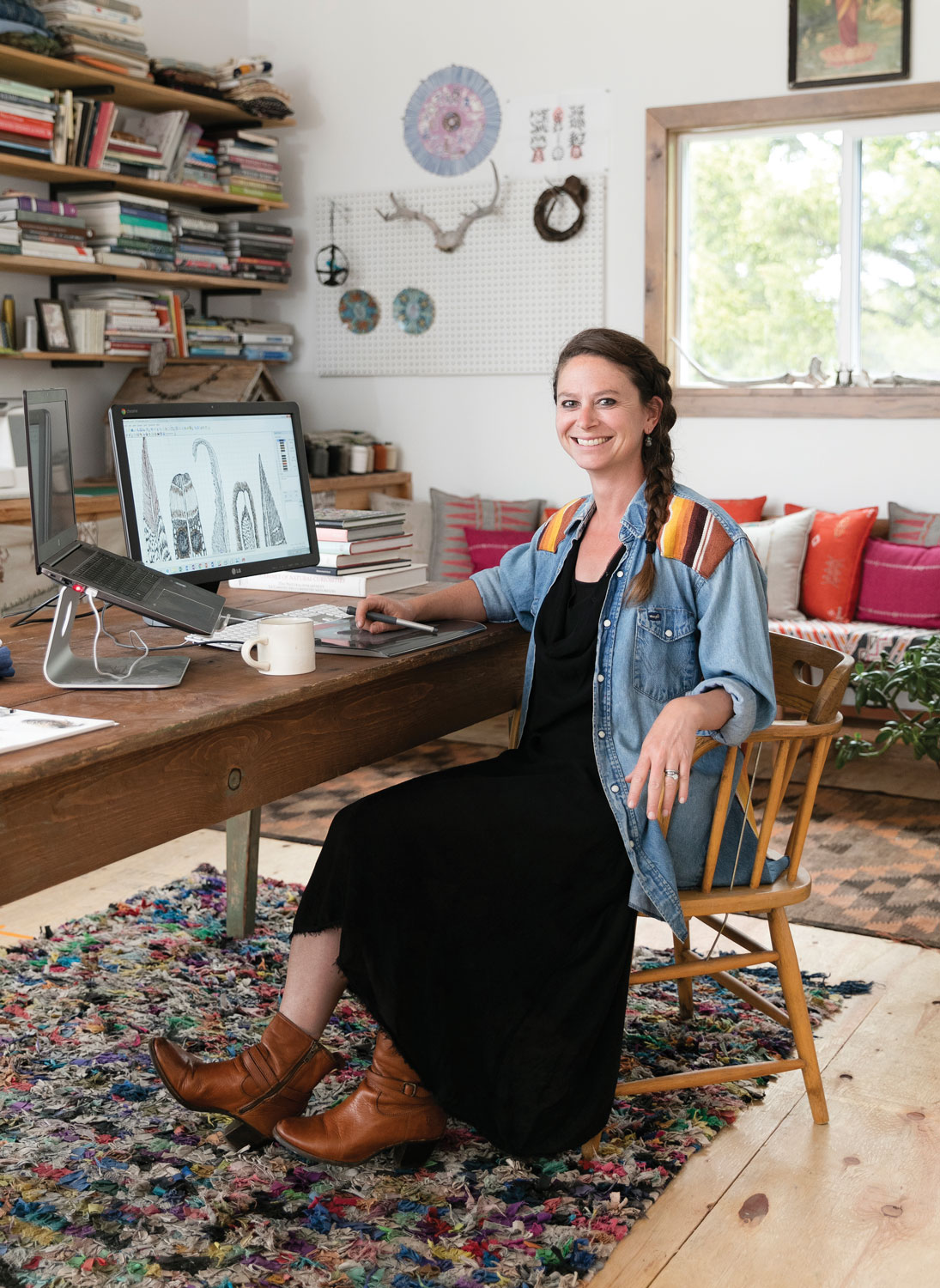 Stephanie Housley, founder of Coral & Tusk, sits in her Bondurant, Wyoming, studio, where she trans- lates her original drawings into a digital embroidery file.

Looking out the window of her home studio in Northern Wyoming, Stephanie Housley takes in the scenic views of the Gros Ventre and Wind River mountain ranges. Inspired by these daily glimpses, it’s here that she draws winsome creatures and emblems of nature’s bounty. 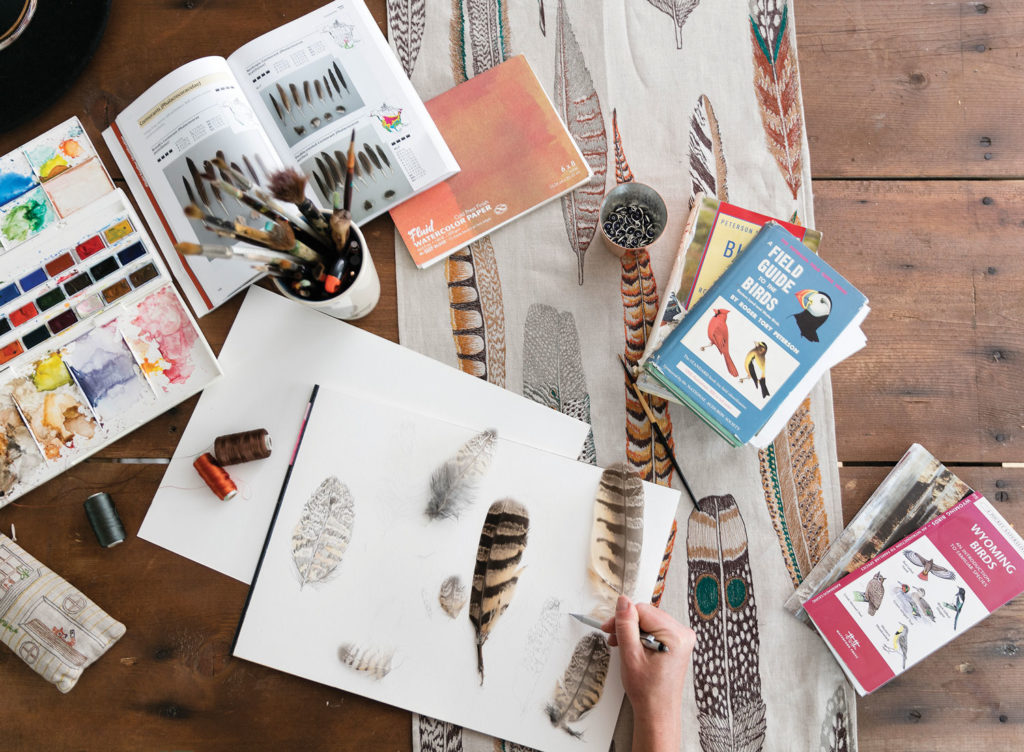 Every Coral & Tusk design begins as an original illustration. Here, Housley draws feathers at the begin- ning of her design process. Behind is the Plumes Feather Table Runner.

Housley is the creative force behind Coral & Tusk, a company she founded in 2007 that produces embroidered textiles for the home — pillows, table runners, napkins, and more — featuring depictions of her hand-drawn illustrations. Her first line was created using an embroidery machine that she operated in her apartment in Brooklyn, New York. Since that time, the design firm has come a long way, both figuratively and literally.

Housley’s love of nature is woven through her life like thread, from her childhood in Ohio and her studies at the Rhode Island School of Design, to her job as a textile designer working with woven fabrics in New York City, to her most recent relocation to Bondurant, at the heart of Northwest Wyoming’s mountain country. 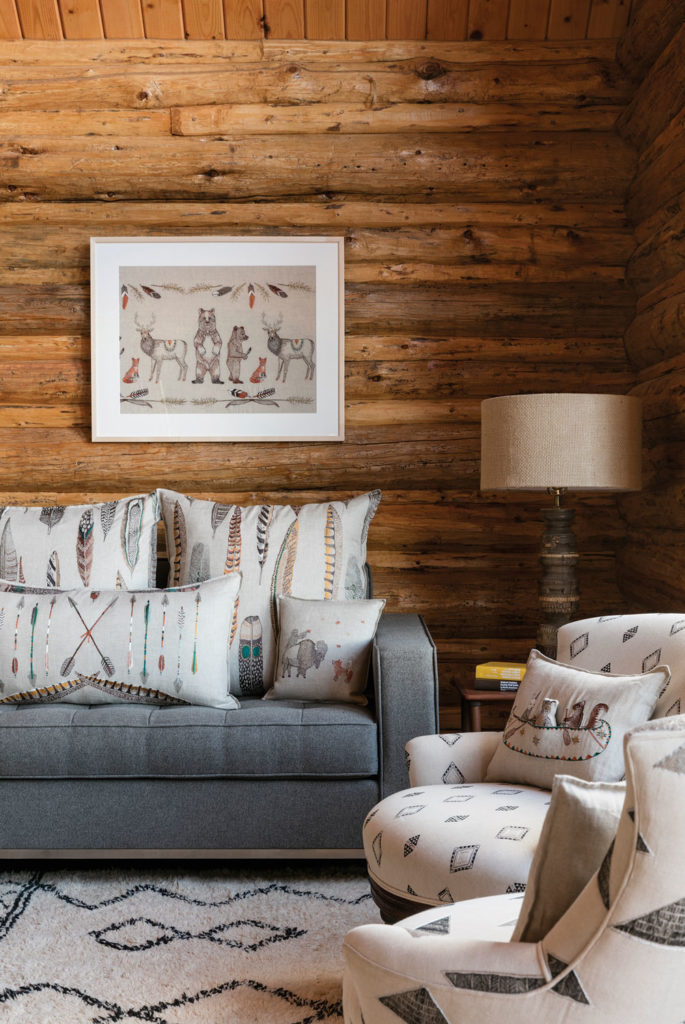 This living room highlights many of Coral & Tusk’s different design elements, including framed embroidered artwork, pillows featuring their signature feather and animal motifs, and chairs that are upholstered in their embroidered fabric.

Today, Coral & Tusk’s whimsical works are featured in stores across the globe, even as the company’s owner seamlessly straddles the urban environment of Brooklyn and the mountain landscapes of the Northern Rockies. “Nature strongly influences my work,” says Housley, whose artistic output ranges from colorful feathers of birds of the Western U.S. to an embroidered canoe steered by a rabbit and a squirrel. Such compositions consist of original art placed on linen items that are eminently usable.

Housley admits to being endlessly inspired by her surroundings, frequently humbled by them, and always amazed. “From the time I was a girl, I was outdoors in the woods, climbing a hill or walking along a creek, examining the plants and trees, the changing of the seasons, the animals that live in those places,” she says.

Several years ago, Housley and her husband, Chris Lacinak, embarked on a cross-country trip in search of a niche where the nature that nourished them would be abundantly available. Bondurant, sandwiched between the ski destination of Jackson Hole and the picturesque ranching community of Pinedale, provided what the couple considers to be their ideal backdrop. They moved into their new home in 2016.

“Living in Brooklyn for 20 years, we had a hunger for nature,” Housley says. “We lived next to a huge park, and we took trips upstate, but it wasn’t the level of nature we needed to feel fulfilled in our lives. Now we live in a stunningly beautiful place where we can see mountains and vast open spaces. We breathe fresh air and get to enjoy a landscape that mostly has silence — certainly not the buzz of the city.” 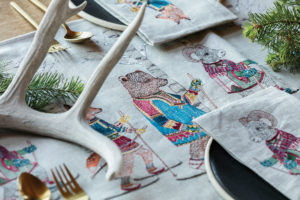 Ideas have emerged since she has been ensconced in the West that are tied to the region and its wildlife: Pheasants strut across tabletop textiles, foxes embroidered on a lumbar support look with curiosity at the non-pillowed world, while nearby bears grasp feathers in their paws, and elk bucks gaze straight into the eyes of an errant observer.

Housley’s illustrations begin in pencil and are re-drawn by her, stitch by stitch, with the aid of a specialized computer program. The digitized images are then machine embroidered, cut, and sewn. The company continues to maintain an office in Brooklyn, but Housley’s westward push has resulted in unexpected and welcomed benefits for the town of Pinedale. There, local workers hired by Coral & Tusk West anchor the enterprise’s distribution center, inventorying, packing, and shipping products. 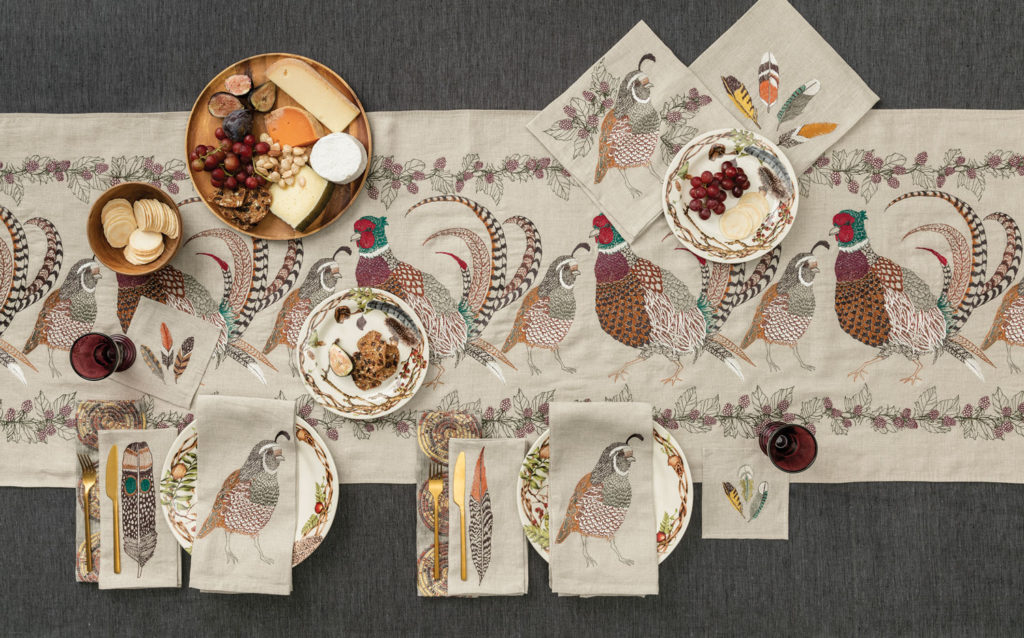 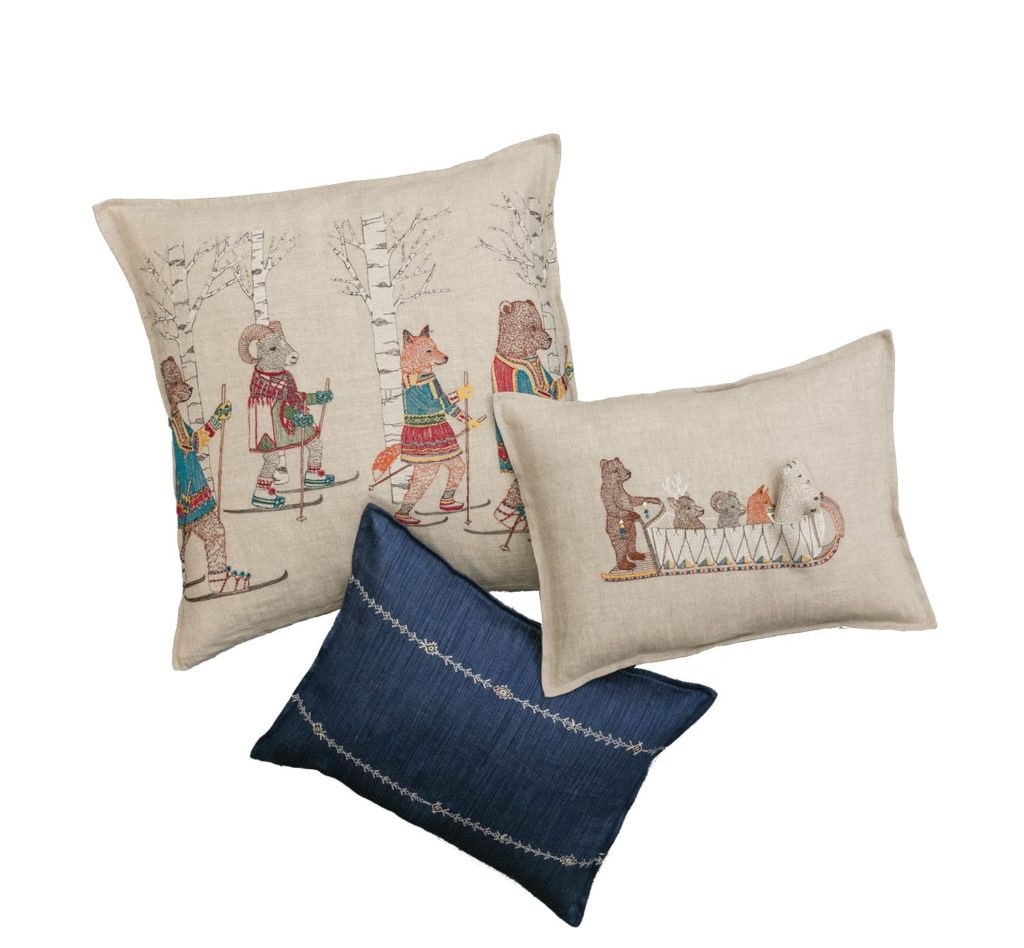 A collection of the brand’s Cross Country Skier themed pillows. The Toboggan Pocket Pillow features a removable plush mountain goat doll, one of many examples of how Coral & Tusk products provide an element of whimsy.

Housley carves out considerable time to engage in a creative process in which she conceptualizes and develops collections with certain themes or environments. Wyoming-born designs include wildlife, but also regional activities Housley has engaged in for the first time, such as cross-country skiing. Trekking across a napkin is the figure of a bear, poles firmly in paw, confident ski stride in place.

Housley, whose company has been toasted in publications ranging from Architectural Digest to Vogue, says she named the firm after materials she considers both authentic and auspicious.

Where the world of Coral & Tusk meets Wyoming, there is life in everything wild. Bears, elk, and owls become flesh in fabric, and it is satisfying to note that there is more than a little bit of Housley in every creature she creates. “Some days, my companions are moose, mule deer, and a great gray owl that lives close by,” she says. “My level of happiness couldn’t be higher.”