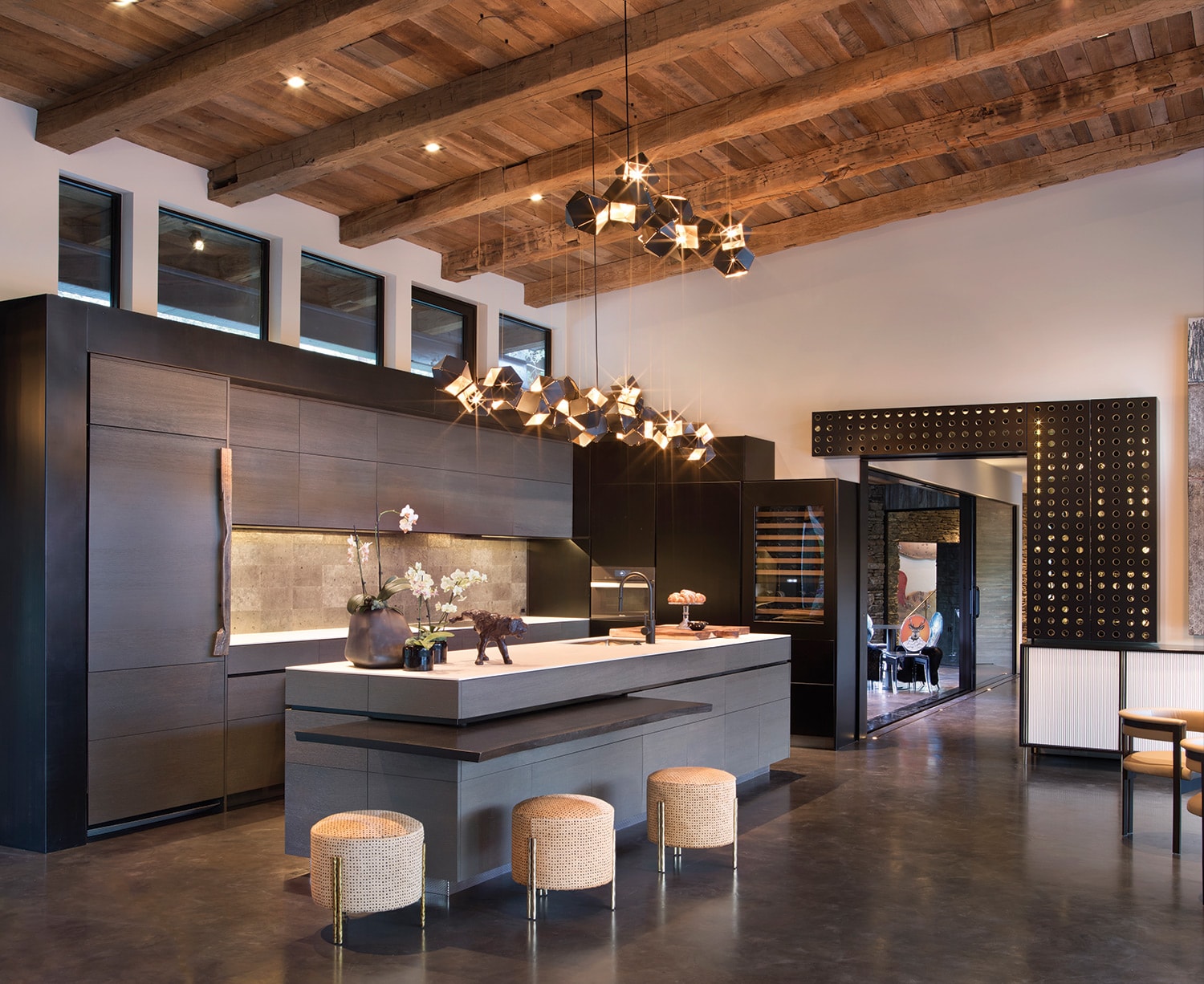 A modern home designed by Ed Ugorowski of Design Partnership and built by Highline Partners under the supervision of Todd Thesing and Cooper Behr is a contrast to the owners’ former home, an arts-andcrafts bungalow next door. The vision called for space, light, impeccable craftsmanship, and an indoor-outdoor ethos. Visual surprises in the open kitchen include a custom Gabriel Scott chandelier of blackened steel and satin brass cubes; a black walnut slab tabletop that swings out from the kitchen island; and a garage-stye, insulated glass door to the greenhouse. The perforated metal piece is from Michael Trent Coates of MTC Studio Designs in Utah.

12 Apr Visions of Space and Light

“I THINK YOU BOUGHT THE WRONG HOUSE,” architect Ed Ugorowski, of Design Partnership in Bozeman, Montana, remembered telling his clients. 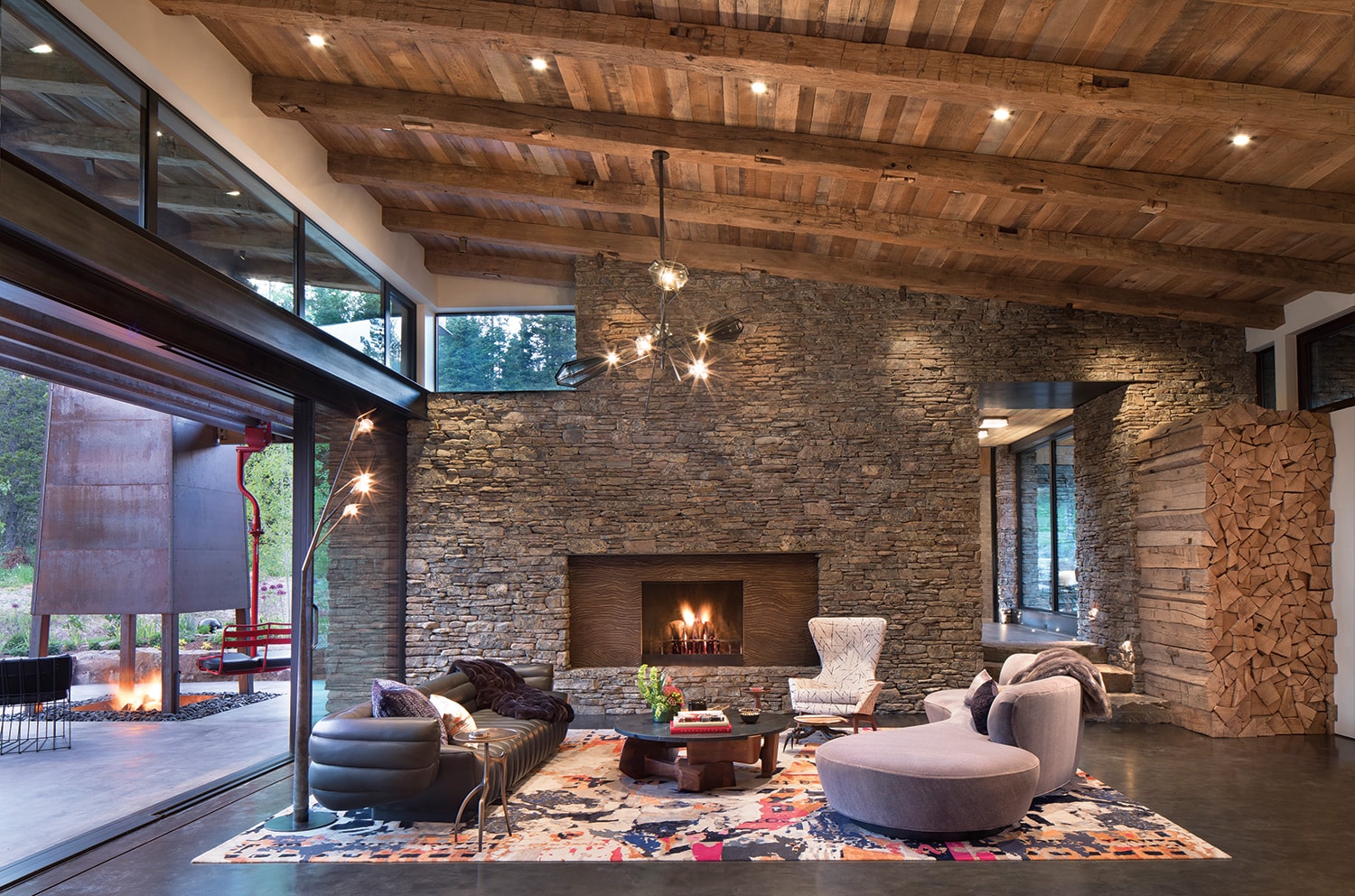 The heart of the home — its living area/dining room/kitchen — is characterized by floors of Topcret microcement, an Argentinian product; 200-year-old hand-hewn oak beams sourced by Montana Reclaimed Lumber from a barn in Ohio; a Montana moss-rock wall by Greater Rocky Mountain Stone; a disappearing window wall; and modernist furniture overhung with Gabriel Scott’s Harlow chandelier. Just outside, an old Bridger Bowl ski chair slides and pivots on a metal I-beam.

It was a Craftsman-style home, beautifully built and timelessly designed. But the very details that made it a successful design represented the things the clients most wanted to change. The windows were small and the overhangs large, so there wasn’t much natural light. The interiors, characterized by woodwork and beams and a large stone fireplace, made the public spaces feel wonderfully cozy and cabin-like, but also heavy, closed-in, and dark. The garage and guesthouse were detached from the main house, a serious inconvenience in Montana’s frequent subzero temperatures. 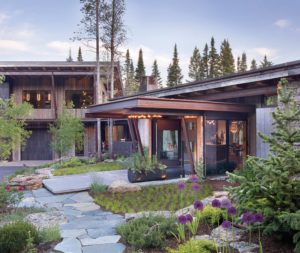 The home’s exterior wood was sourced by Rustic Wood Hub and installed by Blackwood Builders; landscaping was designed by Valley of the Flowers. 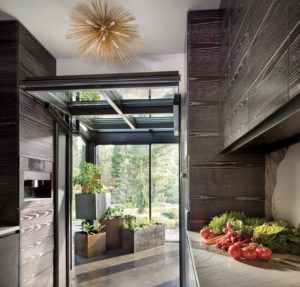 The couple loved the location and had no wish to move. Over time, though, it became apparent that, especially for year-round living, they would need some changes. Fast forward through a couple of years of design work, completed construction plans, and a finalized budget, to the realization that what they really wanted was something entirely different: They wanted space, they wanted light, they wanted an indoor-outdoor connection. They also wanted cutting-edge materials, high-tech windows and door systems, and highly original ideas. In short, they wanted a modern house.

Before long they had set aside their original remodeling plans and successfully negotiated to buy the lot next door. The new property had the same uplifting views of Bridger Bowl ski area and proximity to a world-class Nordic ski resort, but it also boasted a year-round creek. Within days, Ugorowski and builder Todd Thesing of Highline Partners were exploring the property, even sketching out preliminary designs in the snow. With design-savvy owners who had a strong sense of what they were seeking, the process unfolded quickly. 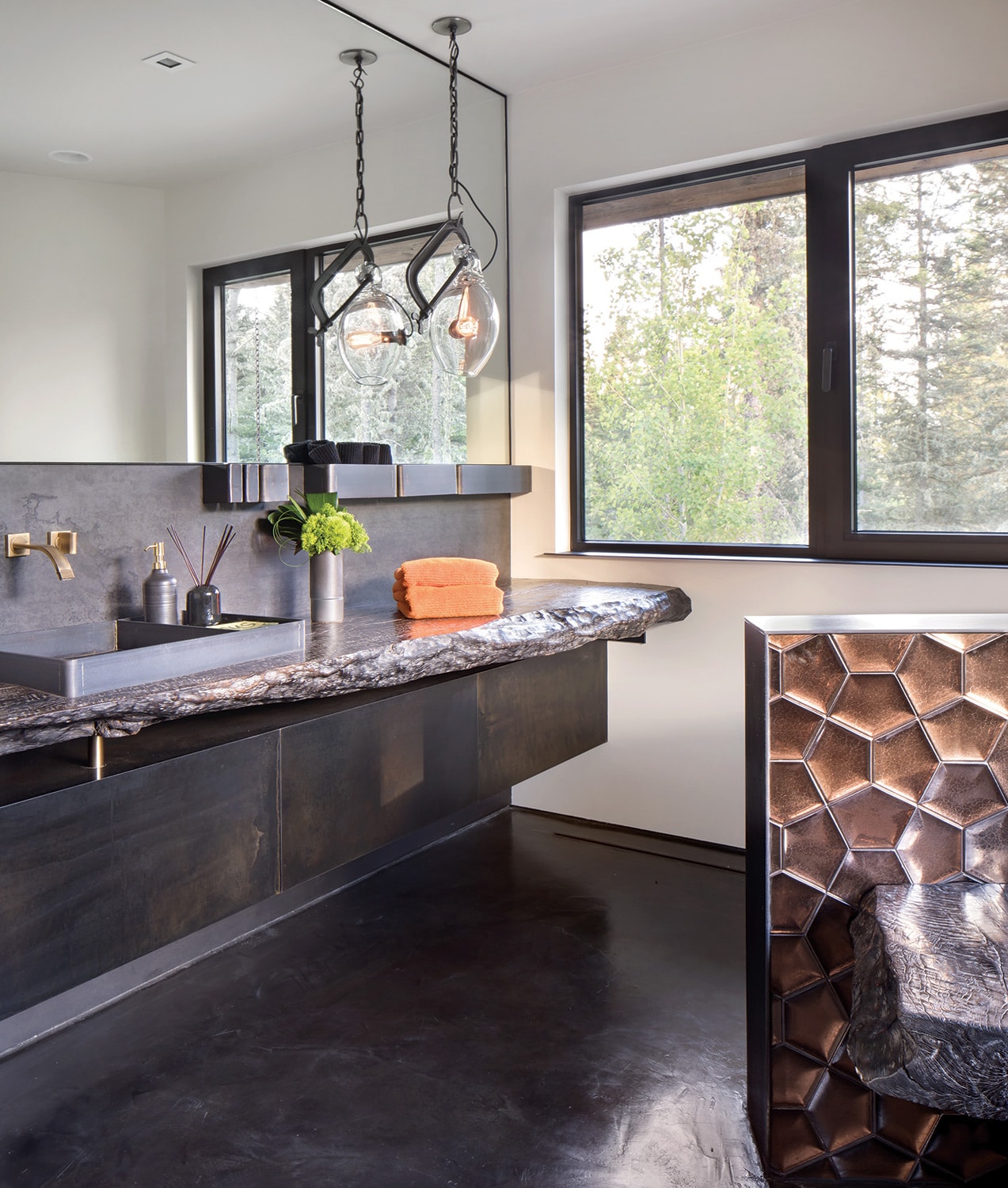 In the master bath, the countertop is ebony with a live edge, the pendant is by Lindsey Adelman. The black steel cabinets are by Frank Horiel of Crown Creations in Livingston; the partition is formed with Ann Sacks tiles in a metallic, antique-gold finish.

The house is sited as close as possible to the creek, about 100 feet away, for the soothing atmospherics of a live water feature. Plenty of existing trees meant instant privacy, while the selective removal of some trees allowed for unobstructed natural light and the opening of view corridors. 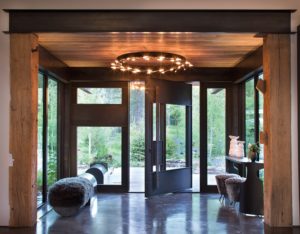 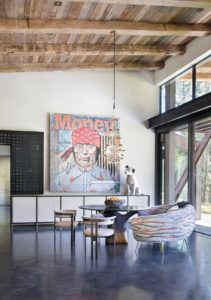 The dining table, a bronze tree stump with a blackened white oak top, is by San Francisco designer Jiun Ho and the droplet pendant is from Townsend Design. Wallace Piatt of Wallace is Art, a Santa Barbara artist, created the striking “Money” magazine pop art. The RCA dog is vintage.

The structure’s primary mass encompasses an open area for living, cooking, and dining. The entrance is marked by a custom 5-foot-wide, 3,000-pound pivoting steel and glass door, flanked by floor-to-ceiling glass. As one steps from the normal height of the wood-ceilinged foyer into the great room, the space opens up dramatically.

The roof is supported by 50-foot-long, 8-by-8-inch, 100-year-old white oak beams sourced by Montana Reclaimed Lumber and shipped west from a barn in Ohio. These slope up and away from the entrance, drawing the eye up and out to the views. The dramatic indoor-outdoor effect is exaggerated by an entire wall of glass: two 20-foot-wide, three-paneled doors which retract out of view to seamlessly meld the living room and patio. A steep overhang, Ugorowski explained, “acts as a solar feature, where the middle band of steel becomes a solar shelf. It keeps the sun from coming in in the summer but allows solar gain in the winter.” 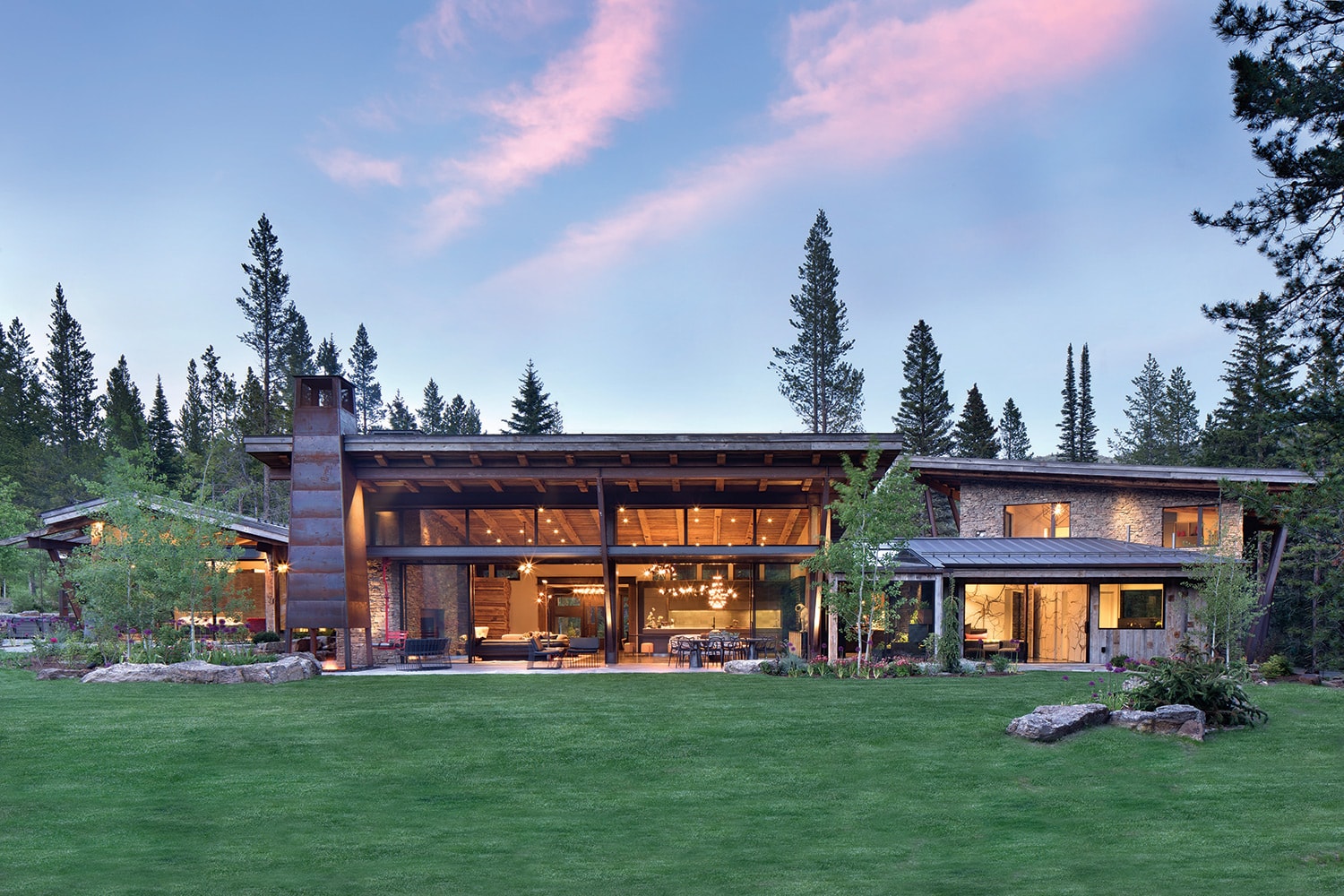 The central portion of the home is positioned to take full advantage of views to the Bridger Mountains. The metal chimney, which punctuates the overhangs and ties into the structure of the house, serves a practical purpose while adding dynamic architectural interest. 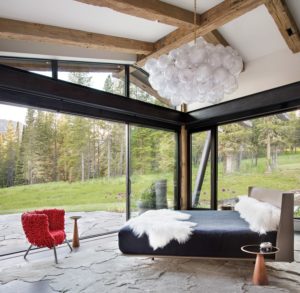 Sleeping in the glass master bedroom, the owner said, feels like camping. Furnishings are minimal and seem to float in the space, particularly the Oly Muriel Cloud chandelier. 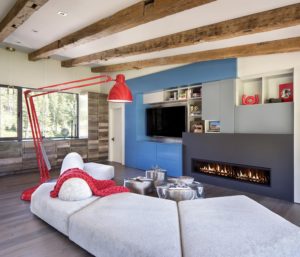 The guest suite, accessed by a floating staircase and featuring an oversized Baxter red lamp and modular sofa designed by Francesco Binfaré, is its own domain.

In the living area, the smooth surfaces of the radiant-heat flooring — made of Topcret, and Argentinian micro cement product in golden bronze — and pristine sections of dry wall contrast nicely with a wall of textured stone. The hearth is recessed within the stone expanse; when not in use, it’s hidden behind two custom steel artwork panels. The aesthetic integration of an otherwise utilitarian kitchen into the living area is achieved through a camouflaged refrigerator and cabinets, and a sleek island design overhung with a chandelier composed of clustered multifaceted pendants, and complemented by a trio of low, round upholstered stools with metallic legs. To one side and set back from the main building lies a secondary cabin-like structure accommodating the master bedroom suite. On the other side, a two-story garage houses an expansive second floor guest suite. A covered porch near the kitchen, incorporating both a Mongolian Evo grill and an Argentinian wood-fired barbecue, allows the homeowners to cook outdoors in all seasons. A separate garage and storage building has ample room for a boat, motorcycle, and ATV, plus tools of all trades. 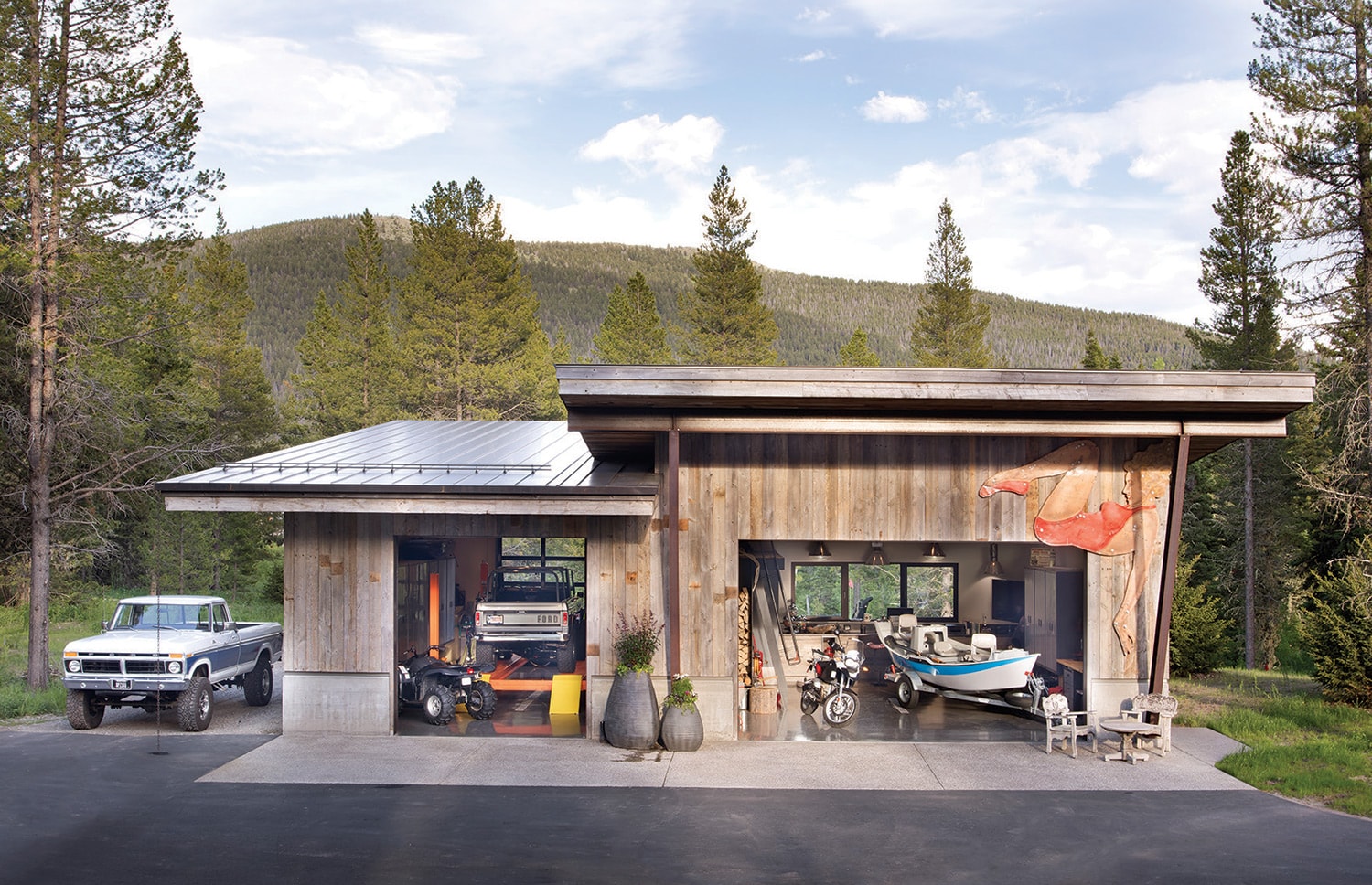 A secondary shed-roof garage houses an array of vehicles: a 1977 Ford Highboy, a 1966 Ford Bronco (the husband’s first car, bought in high school), a BMW motorcycle, ATV, and drift boat. It also serves as a retreat, with a bathroom, wet bar, humidor, and “gladiator cabinet” for hunting and fishing gear. The 1940s pin up girl on the exterior, whose sister resides in the main house, came from a building in Los Angeles slated for demolition.

Throughout the home, creative flourishes abound. From the powder room entrance — constructed to look like a woodpile — to a graceful floating staircase, visual surprises delight at every turn. A greenhouse, accessed by an aircraft hanger-style glass door, features artfully stacked planter boxes. The glass-walled master bedroom is ethereally furnished, with a bed that seems to float in the room and a single red chair that seconds as an art piece. On the primary patio, a fire feature is housed in a metal chimney that is integrated into the upper roofline of the house. The fire can be enjoyed from a vintage Bridger Bowl chairlift, which hangs from above and both swings and pivots. Unusual finishes, bold wall treatments, and Modernist furniture and lighting fixtures characterize the home’s one-of-a-kind interiors. Even the metal garage doors are hand-waxed. 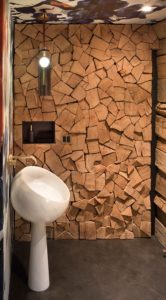 The powder room, with its modernist Gong washbasin from Kreoo, is rusticated with a stacked-wood wall handcrafted by Ian Shinn of Highline Partners.

Throughout the project, the clients worked closely with the architect, the builder, and a team of talented artisans and subcontractors, including Montana Ironworks, Crown Creations Cabinetmakers, and Valley of the Flowers Landscaping, under the direction of Highline’s project manager Cooper Behr. Ugorowski said that because of the client’s strong design sense and ability to read plans (“the best I’ve ever worked with,” he declared), the project was a successful collaborative effort.

Thesing agreed. The client, he said, “would rip something out of a magazine. We’d talk about it, make it a little different and let the stream of creativity roll.” A discussion of the relative merits and drawbacks of timbers and stone, for instance, “became a discussion about transparency to the outside, and celebrating the timbers, the stone, and the steel, and how the organic elements can stand on their own.

“There was a great creative energy,” he continued. “The clients really had a solid idea of what they wanted and Ed worked hard to get exactly that. When everyone checks their egos at the door and comes together for a collaborative charrette, cool things can happen.”

And in this uniquely artistic Bridger Canyon home, that is exactly what happened.