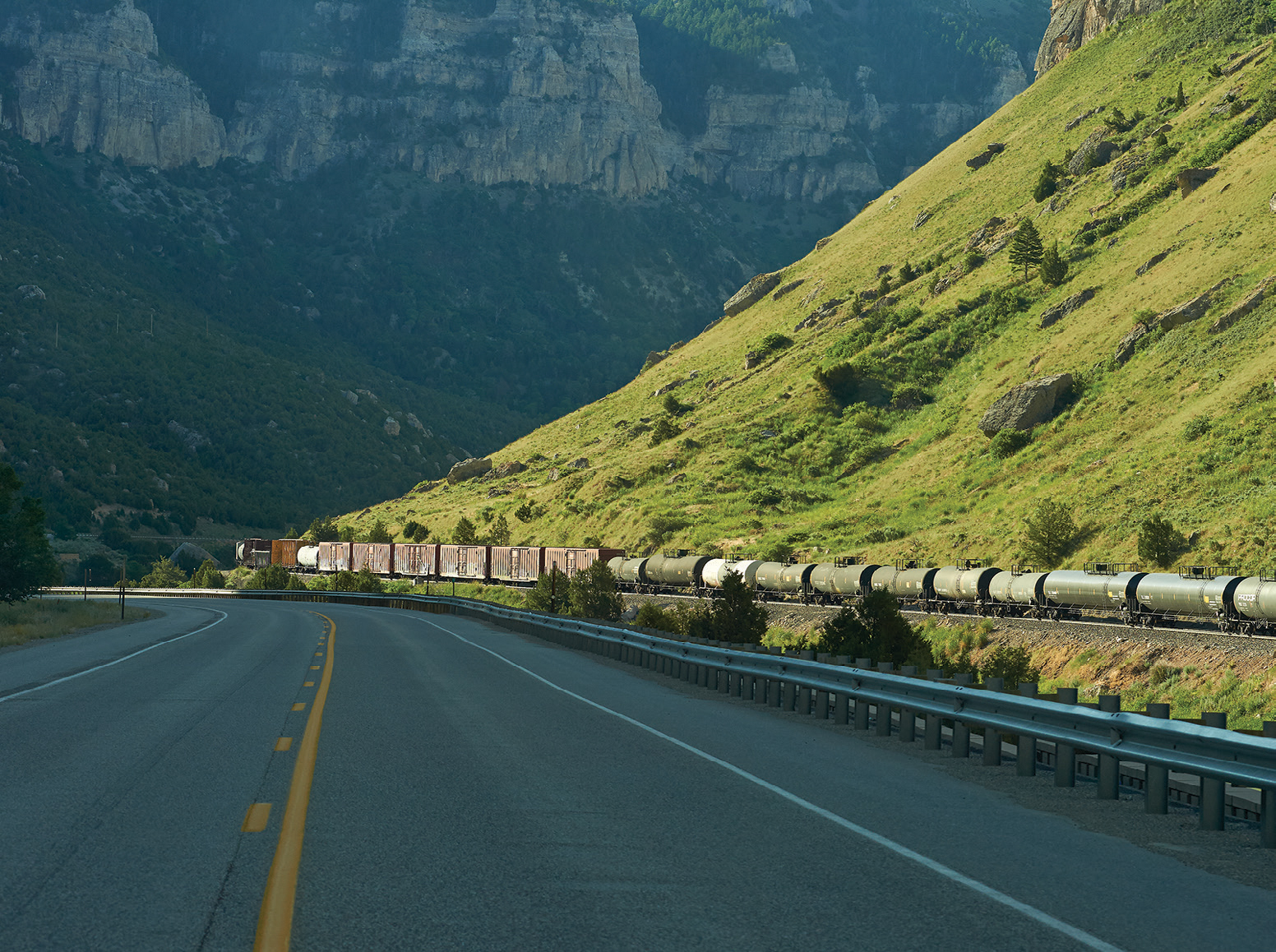 In 1914, the Chicago and North Western Railway built this line, which runs through the Wind River Canyon between Casper, Wyoming and Billings, Montana. Today it’s operated by the Burlington Northern Santa Fe Railway.

03 Feb Three Trips to the Wind

“Many men go fishing all their lives without knowing that it is not fish they are after.”
— Henry David Thoreau

At some point, about a dozen years into my practice of fly fishing, it became important to me to catch a really big fish. In the late 1970s, I attended a Trout Unlimited presentation about the Wind River. The slides of the Wyoming fishery revealed the kind of trophy trout I’d been dreaming about; I knew I needed to go there. In the course of three visits over multiple decades, the Wind River became my muse, and each trip was memorable in its own way. 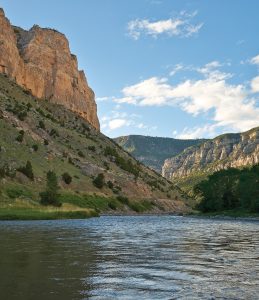 The middle section of Wind River Canyon, located on the Wind River Indian Reservation, is a geology lesson, a trip through time, and one of the great trout streams of the West.

I was 32 at the time of my first trip, and a restless seeker and professional photographer who had fallen head-over-heels for fly fishing in my early 20s. The passion, over the years, was beginning to feel more like an addiction. 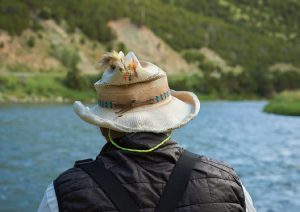 One Saturday in late September, my wife Leigh and I loaded my camera and fishing gear into the back of my truck. As a photographer, I was fascinated by the faces of characters from the Old West, and, having made a couple of portraits of retired stock detectives (aka brand inspectors), I was considering turning a series of these into a book. I was collecting names here and there of some old-timers, when I came across a couple of Wyoming-based brand inspectors, “Chief” Bader and Rusty Pickard, who resided in Worland. We headed north from our home in Colorado with the goal of capturing some photographs and wetting a line. 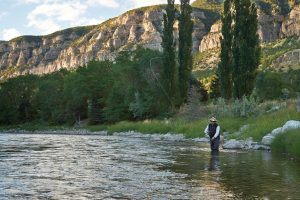 We arrived in Thermopolis before dusk and checked into an inexpensive riverside motel. The highway intersects this quaint Western town, which is known for its hot springs. Once used for ritual purification by the area’s Indigenous peoples, the springs are now a popular tourist stop. And at a nondescript boat launch above the town, marked by a sign denoting the “Wedding of the Waters,” the river’s name changes from the Wind to the Bighorn. 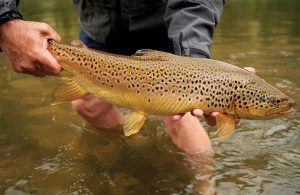 We woke up early the next morning to mist along the river and had breakfast at a small diner before heading to the Wind River Canyon. The sky was overcast and there was a chill in the air, reminding us that it was autumn. Leigh and I scrambled down a steep, poison ivy-covered embankment that deposited us at the edge of the wide bankfull Wind River. My fishing journal from that day reports: 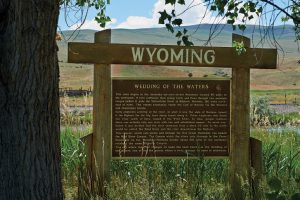 The river’s name changes from the Wind to the Bighorn right where it empties out of the canyon at the “Wedding of the Waters.”

“Wind River Canyon, a few miles above the ‘Wedding of the Waters.’ Tried nymphs — no hits. Changed over to a Hair Wing Rio Grande King on the end and a Renegade dropper. Caught a large hen brown on the Hair Wing. Unfortunately, during the fight, the fish died. Leigh was dismayed when she saw the ripe spawning eggs. After I cleaned the fish and put her in the creel, I began to cast. In a frosty tone of voice, she asked me, “What are you doing?” I looked at her confusedly, “Fishing,” I replied. “Why?” she inquired, “You just killed about a thousand fish!” 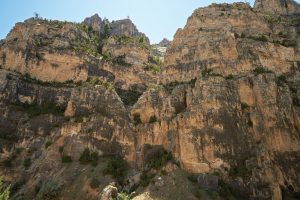 Spectacular ancient Precambrian rock walls, part of the Owl Creek Range, soar up to 2,500 vertical feet above the river.

Reading this journal entry still triggers feelings of regret. Like most men in their 30s, I was operating more on testosterone than self-awareness, and I now understand why the ripe eggs of the hen triggered Leigh. We were in the process of trying to start a family. An infertility issue had become a probability, and we hadn’t yet come to terms with what to do about it. At the time, there were three things on my mind: career, family, and sport. As an artist living in a world that worships achievement, I had major concerns about supporting a family. However, Leigh was determined to address her infertility. 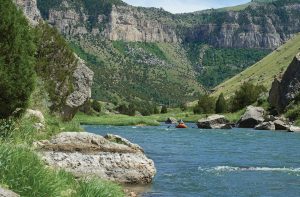 Guided trips on the Wind offer anglers the opportunity to hook the fish of a lifetime. Opposite page: This rainbow gobbled a large stonefly.

Twelve years later, in the spring of 1995, I was crossing the state line between Colorado and Wyoming, listening to Willie Nelson on cassette. I’d landed a magazine assignment to shoot photographs of historic hunting rifles and trophy deer mounts at the Buffalo Bill Museum in Cody, after becoming a contributing photographer for Sports Afield magazine. Three years earlier, the book of black-and-white portraits I had been working on during that first trip to the Wind had been published. I now had the good fortune to explore the museum’s outstanding acquisitions and, once again, try my luck down in the Wind River Canyon.

The assignment would be technically challenging, but I had this long-suppressed obsession with the Wind River that needed attending. It was a 90-mile drive from Cody, and once there, I rigged up and clambered down the steep embankment at the now-familiar pullout. Wading was possible intermittently and, though I wore chest waders, I was barely able to stay dry as I sloshed into the heavy flow.

It was too cold for dry flies, so I fished small nymphs. After about an hour, I tied on a larger bug. While fishing the small patterns, I’d used 5X tippet. When I tied on a large crane fly — rusty from the winter’s layoff — I failed to modify my leader. I cast the large weighted fly as far as I could, plopping it upstream at the edge of a large boulder. The line swung in a back eddy for several feet before I detected a pause. I set the hook and raised the fish, briefly seeing its dark green spotted back and silver flanks. It was huge — more like an ocean fish — and by far the largest trout I’d ever hooked. From the corner of my eye, I could see the bend in the rod extended to the handle.

It was a rainbow, and it tore away diagonally, porpoising across the width of the river as it bore downstream. With the line melting off the reel, I wondered if I was about to be spooled. Then the fish stopped downstream on the other side, presumably shaking his head and sulking. It seemed like a stalemate, though I had only a short history with big fish. While I kept the rod tip high and the pressure on, my confidence turned into despair. The line went limp, and the fish was gone. 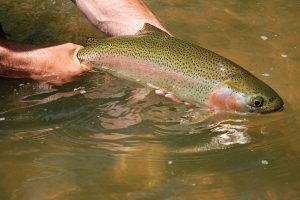 This rainbow gobbled a large stonefly.

In the spring of 2019, an ad agency out of Los Angeles called me with a photo assignment: a portrait of Colleen Hodson, the director of the Wyoming Dude Ranch Association up in Cody. Another spring road trip through Wyoming — and another attempt at fishing the Wind — seemed just the tonic I needed after a long Colorado winter.

The shadows were cold in the canyon. My Tribal fishing permit was in my shirt pocket. With no trail down the steep embankment, I slid on my butt much of the way, eventually encountering a big, clear pocket of water. Green moss grew along the multicolored cobbled river bottom, and sizable patches of this aquatic vegetation were floating down the Wind like clusters of kelp.

Knotting a couple of nymphs, I crimped on one split shot and began to cast. Within a few drifts, I was hung up in the moss. The river was deceptively powerful, and the only good news about the mossy conditions was that, when I got hung up on the bottom, I was able to pry my flies loose.

After about 30 minutes of having to clean moss off after every cast, I considered bagging it. I changed to a smaller fly, and a long cast dropped my rig into a boulder-created run. Midway down the smooth water, I saw the line stop and I tightened. On the end of my line was a well-proportioned rainbow, a little over 18 inches. I admired the wide red slash along his flanks and, gently holding him above the tail, placed him back into the current.

Now I wanted his papa. I waded to shore and sat down on the bank, watching an American Dipper hop from a rock and dive for aquatic insects. Two large boulders created a chute of rock-littered whitewater that emptied into a deep olive-green pool. I flung the flies up into the chute and, as the line drifted on the edge of a slower seam, detected a subtle pulse. I lifted the rod and set the hook: showtime. A large fish rocketed up and out of the water. Dark against the angular light, I couldn’t determine if it was a brown or a rainbow, but its propensity to jump told me it was a ‘bow. It looked to be about 25 inches — not as large as the monster I’d lost in ’95, but a whopper nonetheless.

It was then that I realized I should have re-tied my flies after my previous catch. Compounding matters, when the fish jumped, I neglected to bow to it and created slack. He splashed back into the pool with the small Hare’s Ear stuck in his kype. My tippet had broken above the point fly. The 2X made me overconfident.

I tied on a new fly and made several casts back into the hole, but my heart wasn’t in it. I was the same obsessive angler I’d been 30 years prior, but feeling defeated, I climbed up and out of the canyon. A leak in my waders made it feel like I’d peed my pants, which at the time seemed fitting.

After breaking down my rod, I sat on the tailgate and took in the spectacular setting. I suddenly longed for the company of our two grown sons. The thought triggered a small, sharp pain in my heart. I began to laugh, a slow chortle that started in my throat and deepened. I took a long drink of water and began loading my gear into the cab as a raven let out a grating croak.

The Wind River is a sacred place. It had taken three decades for this to register. Three protracted visits neatly divided my angling life into a three-act play. I could see the same Wind River, but at each stage, there was a changed man beside it. I didn’t know if my three encounters were more a case of self-discovery or one of self-forgetting. But it was now clear that the “big one” was only my adolescent desire, and maybe it was high time to let that go.