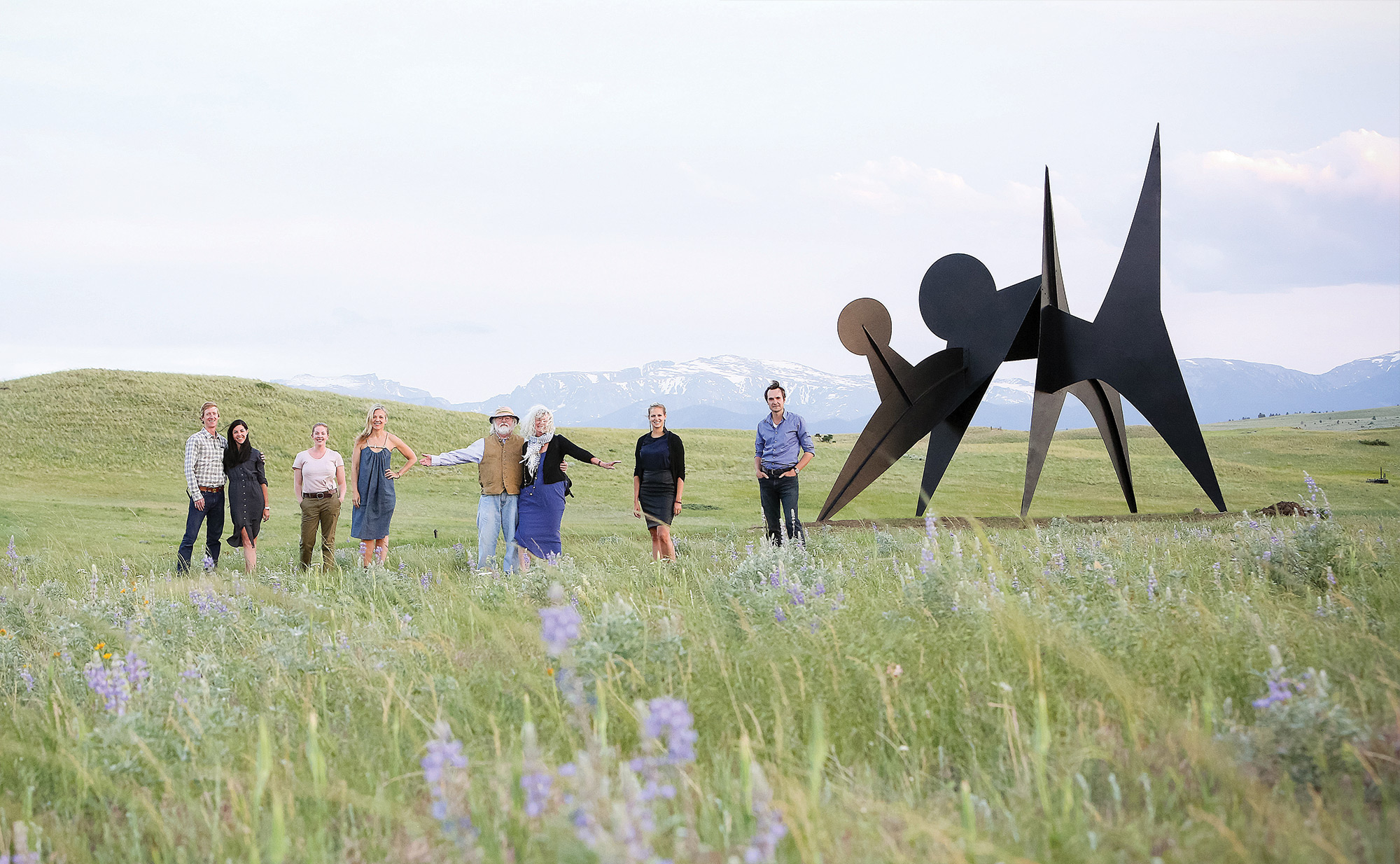 THE 11,500-ACRE TIPPET RISE ART CENTER, built on a working ranch, is a concert hall and an outdoor sculpture garden. It’s also an environmental statement and an artful collaboration. But more than anything else, it’s a gift to the arts-loving public.

Tippet Rise benefactors Peter and Cathy Halstead had a vision for a project that would merge landscape with the arts. But where would they build it? After spending years searching for an appropriate piece of land in both Hawaii and Colorado, they found their property on the northern slopes of the Absaroka-Beartooths. It was a location that would provide a magnificent, nature-driven “gallery,” with room for both indoor and outdoor concert spaces.

Early praise for their work has included words like “innovative,” “mold breaking,” and “environmentally progressive.”

Located on some of the same ground that for decades inspired modernist painter Isabelle Johnson, Tippet Rise — like its former inhabitant — is an original. Neither festival nor retreat, it incorporates elements of both. It’s not Vail or Telluride, Interlochen or Spoleto, although its benefactors are familiar with those locations. Instead, it’s the Halsteads’ very personal homage to the arts, taking their philanthropy and love of art and music to a grand level.

As creators and bankrollers of the nonprofit enterprise, the Halsteads had a particular vision. Peter, an accomplished pianist (he collects Steinways), dreamed of weaving classical music through the terrain. Cathy, a painter with a fondness for grand sculptural pieces, shares Peter’s love of the outdoors. They wanted their concert space to extend out into the landscape, to merge man’s creations with nature’s art.

To help lead the project, they courted internationally recognized acoustician, designer, and venue planner Alban Bassuet. As executive director, Bassuet now supervises design, construction, and programming. He is a hands-on maestro — studying architectural plans, phoning, texting, taking notes, making decisions, conducting business.
As he drives around the property with journalists, he is in his element, navigating Isabelle Johnson’s hallowed stomping grounds, surveying the finishing touches on the landscape, readying for Tippet Rise’s summer premier. He waves to workers, praises the views, and admires sculpture installations. “I like to break down boundaries,” says Bassuet, listing projects he’s supervised in Greece, Switzerland, Iceland, Houston, Boston, and Taipei. Each venue connects its audience with environment and art in a distinctive, trend-setting fashion.

“Is there a budget?” a guest asks. “Not really,” Bassuet replies. “It’s about the Halsteads’ belief that art, architecture, music, and nature all play key roles in the human experience.”

The Halsteads’ substantial fortunes come from investments, banking, oil, and alcohol. Sidney Frank, Cathy‘s father, founded Grey Goose vodka. And they both grew up in environments that valued philanthropy, art, and reverence for the land. When they hired Bassuet, they found someone whose artistic sensibilities paralleled theirs.

As one drives around the ranch, outdoor sculpture installations come into view, one after the other. Each installation looks tailor-made for its place, either an organic part of this landscape of grass, sagebrush, and stone, or making a statement against its extravagant backdrop

The Halsteads wanted people to be free to “move about the land, appreciating it as an extension of their enjoyment of the arts,” Bassuet says. “And they insisted that each piece occupy its own space.” With sculpture commissions in the millions, the Halsteads believe that viewers should concentrate on each piece individually — without seeing another work. For that, they needed a large expanse of land.

“What we are doing here is progressive,” says Bassuet. “We’re about renewable energy, sustainable farming, hiring local people, buying local, and making magnificent art — both to view and listen to.”
In addition to the outdoor sculpture installations, there are two music venues: an indoor site, the Olivier Barn, and a portable acoustic shell, Tiara. Other performances will be staged at sculpture sites. (Violinist Midori’s name has been bandied about.) The Olivier Barn, in addition to providing a concert space, also features a visitor center and screening room. Designer Laura Viklund helped create the timber-frame assembly, while Bassuet was a principal in crafting the perfect acoustics. Water, electricity, insulation, heating, cooling, and solar panels are all planet friendly.

The Halsteads chose nationally known pianist Christopher O’Riley as music director. In addition to his own recording and concert career, O’Riley is host of National Public Radio’s “From the Top.” The program that O’Riley created for Tippet Rise features world premieres by prominent composers and internationally renowned artists.

To discourage any perception of elitism, tickets to the performances venues — outdoor and indoor — cost only $10. In the tradition of chamber music soirees, each performance is limited to 100 tickets. The first season sold out immediately. Concert attendees may enhance their experience with a tour of outdoor sculptures created by internationally known artists. Drivers shuttle viewers to nine large pieces carefully positioned on the vast expanse. As more sculpture is added, it will be visited in environmentally friendly electric cars.

Veteran rancher Ben Wynthein manages the property, insuring that it remains a working ranch, digging wells and monitoring grazing of sheep and cattle. Pete and Lindsey Hinmon direct logistics and operations, including working with teachers from surrounding towns to arrange field trips and outings for students.

To further engage locals, Bassuet and the Halsteads made a point of hiring Montana labor and contractors. They recruited local landscapers, maintenance workers, marketing specialists, ushers, stagehands, and drivers. They signed on local caterers Wendy Reed and Nick Goldman, remembered for their inventive feasts at Big Yellow House, a café and guest house in Absarokee.
“We are all about imagination,” says Bassuet. “We want audiences to experience everything around them in an artful fashion.”

Bassuet’s love of the dramatic surfaces as he continues his driving tour. Just west of the Olivier Barn, artist Patrick Dougherty created Daydreams. The one-room prairie schoolhouse looks like a set piece for “Little House on the Prairie,” albeit draped in woven saplings and sticks. The building is new, but designed to appear old. “Look,” says Bassuet, “we have shingles blown off the roof and exposed beams.” Nails have been pushed up to look as if they’ve spent decades battling the elements. Dougherty’s woven willows bring the building to life.

Bassuet and the Halsteads hired JXM and Associates and CTA Architects to design and build the old-fashioned looking schoolhouse, then Dougherty worked his magic. “Kids love it,” says Bassuet. “We are lighting a spark in them through art and nature.”

Further to the southwest, a strategically placed piece titled Proverb, by artist Mark di Suvero, rises to a height of six stories. It has a metronome-like pendulum and A-frame supports. It was moved from Dallas — one of 55 cities to host the famed artist’s work. “Isn’t it wonderful? You see only it, and hills, trees, and space,” says Bassuet. Another monumental di Suvero piece, Beethoven’s Quartet, has a mobile musical look. In the tradition of Alexander Calder, it incorporates wood and steel, and invites touch. Then back in the van and around a ridge, artist Ricardo Sanz, of Ensamble Studios in Madrid, is installing Beartooth Portal, two massive vertical rocklike forms that lean like magnets toward one another.

In yet another space on the ranch, famed structural artist Stephen Talasnik’s Pioneer appears to float, drawing the eye toward the sky.

The artists — from U.S. cities and Europe — all fell in love with Montana, Bassuet says, “and found themselves captivated by its spectacular settings.” (His own affinity for the project resulted in moving his family to Montana.)

Exquisite craftsmanship is the byword at Tippet Rise. Utility lines are hidden. Even the parking lot looks discreetly natural, “to entice the eye as one approaches,” says Bassuet.

Were there skeptics and naysayers? “Of course,” shrugs Bassuet. “But we are good listeners, courteous and polite. We’ve shown we are friends of the land — progressive in our use of renewable energy, concerned about preserving the integrity and beauty we all love.”

Hearing that his guests share his love of travel, he asks, “Have you ever seen anything to compare to this? Anywhere in the world? I don’t think so. I have worked on many performing spaces. I’ve noticed a shift in the way the arts are presented. Worldwide, the trend is to encourage audience participation. Gradually, the way we experience art is changing.

“We believe people will visit Tippet Rise almost as a pilgrimage,” he says, then adds, “Tippet Rise will become, in time, a destination.”

The Olivier Barn is an acoustically sophisticated performance space presented within a structure that suits the history and landscape of the location. 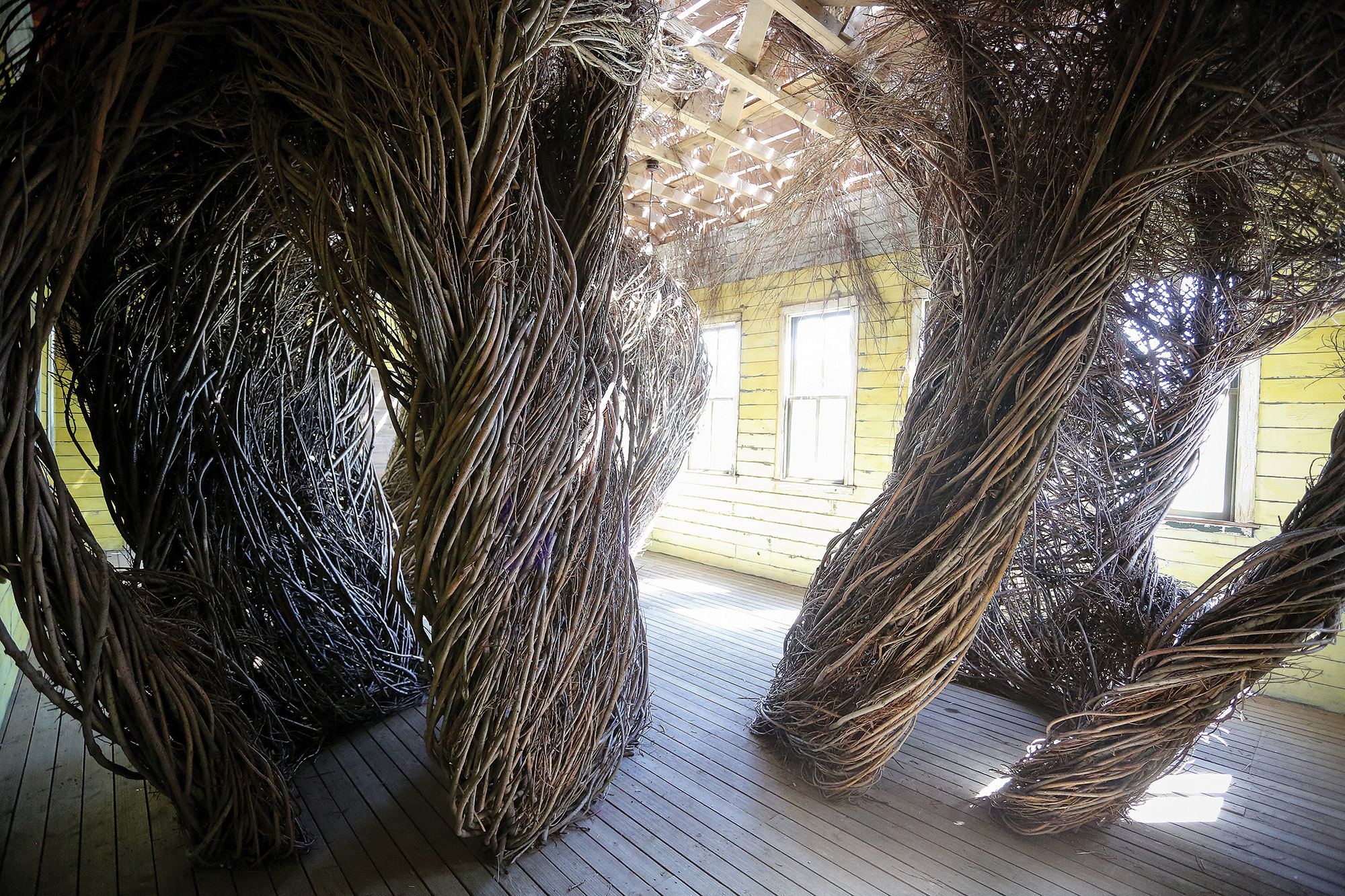 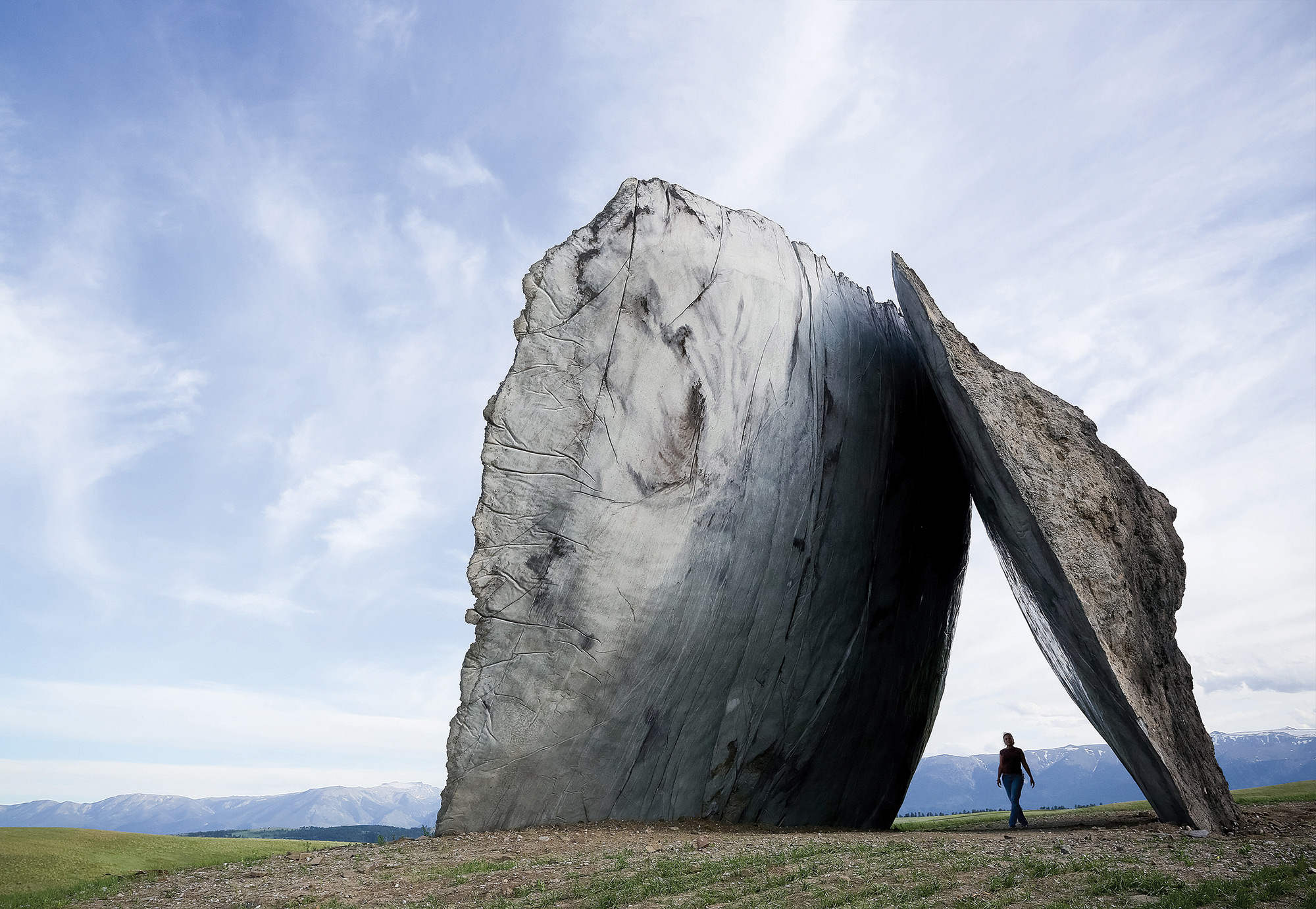 “Inverted Portal” by Ensamble Studio, construction and installation by On Site Management, provides a kind of gateway to the extraordinary landscape on display to the south. above 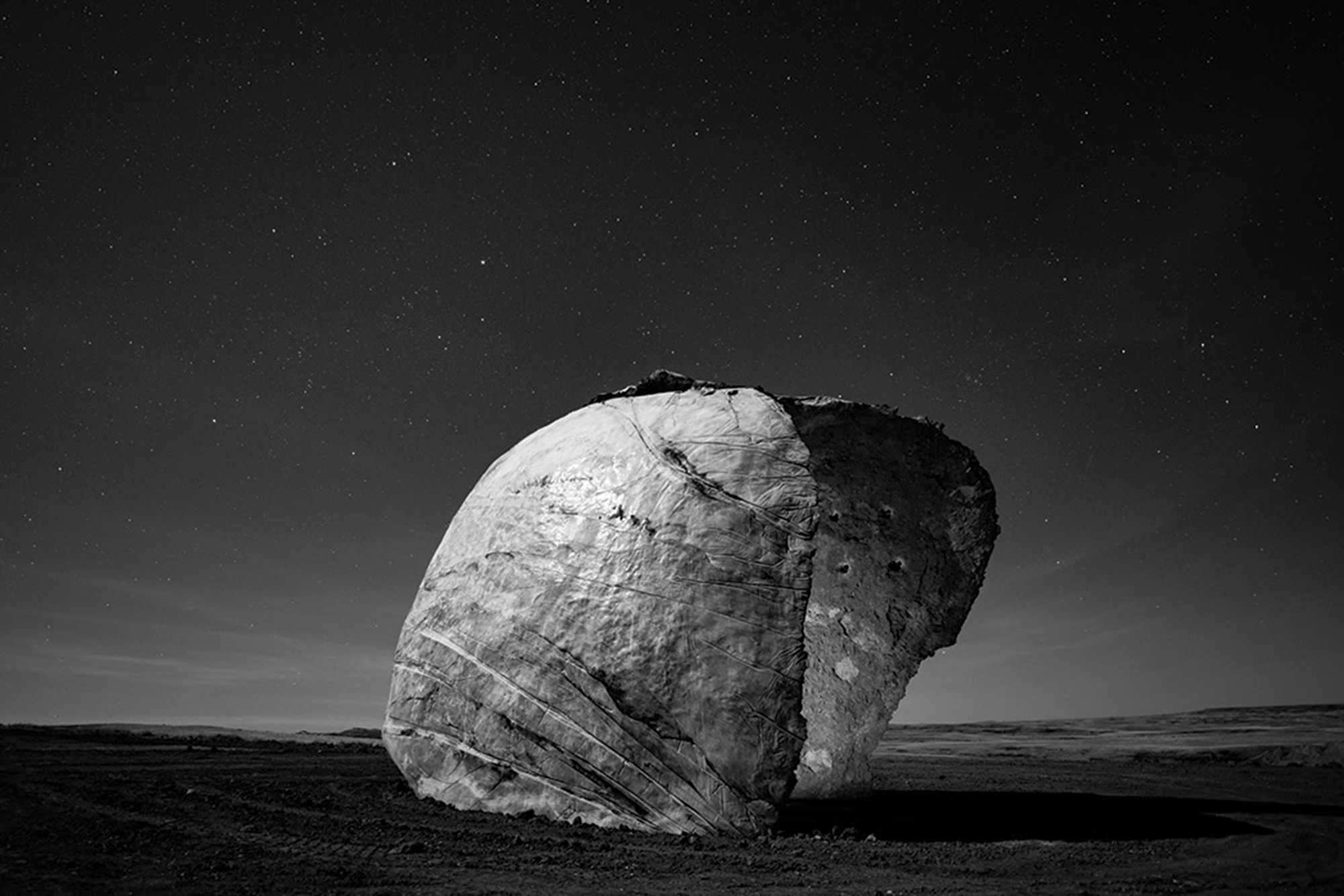 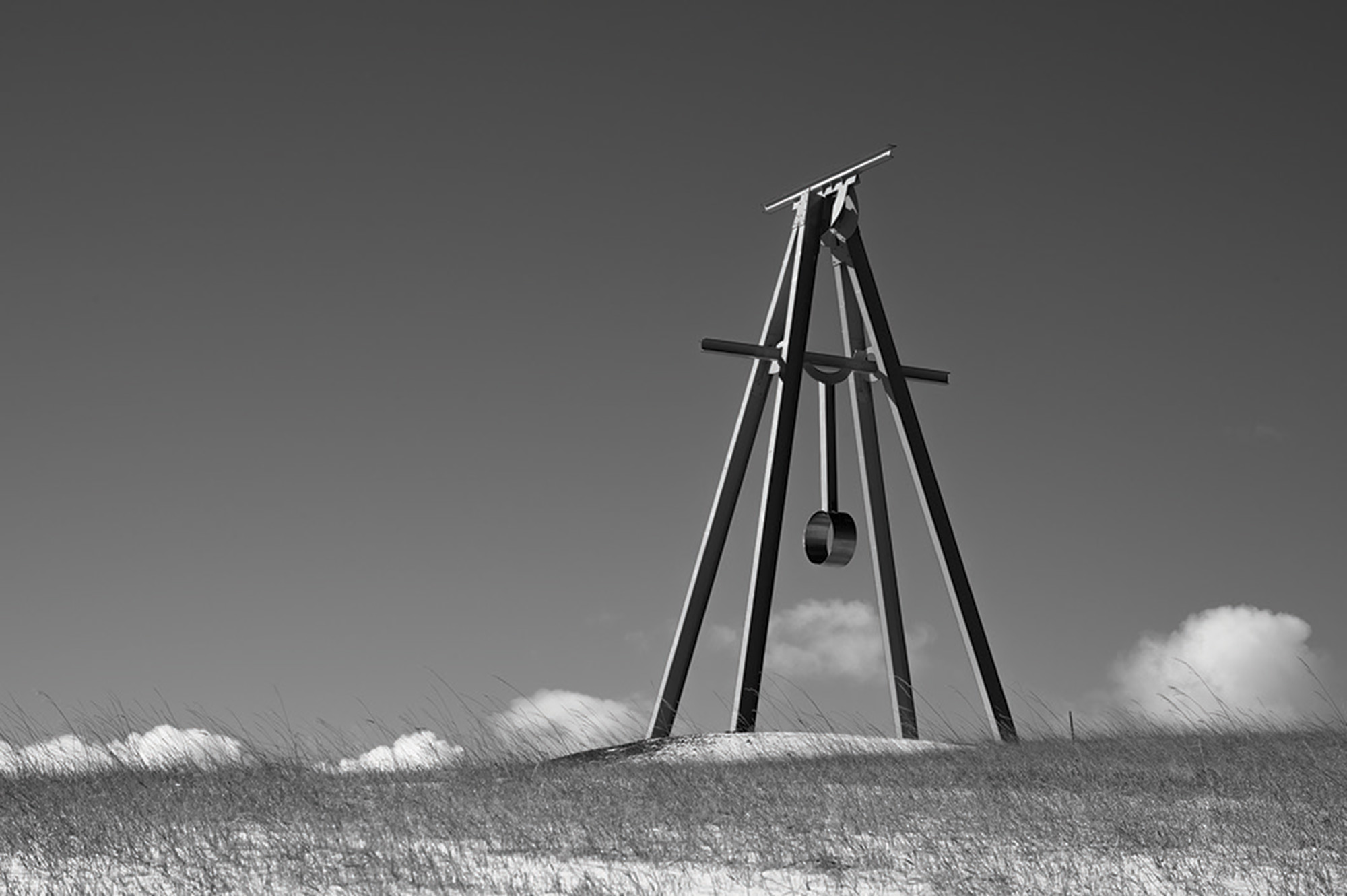 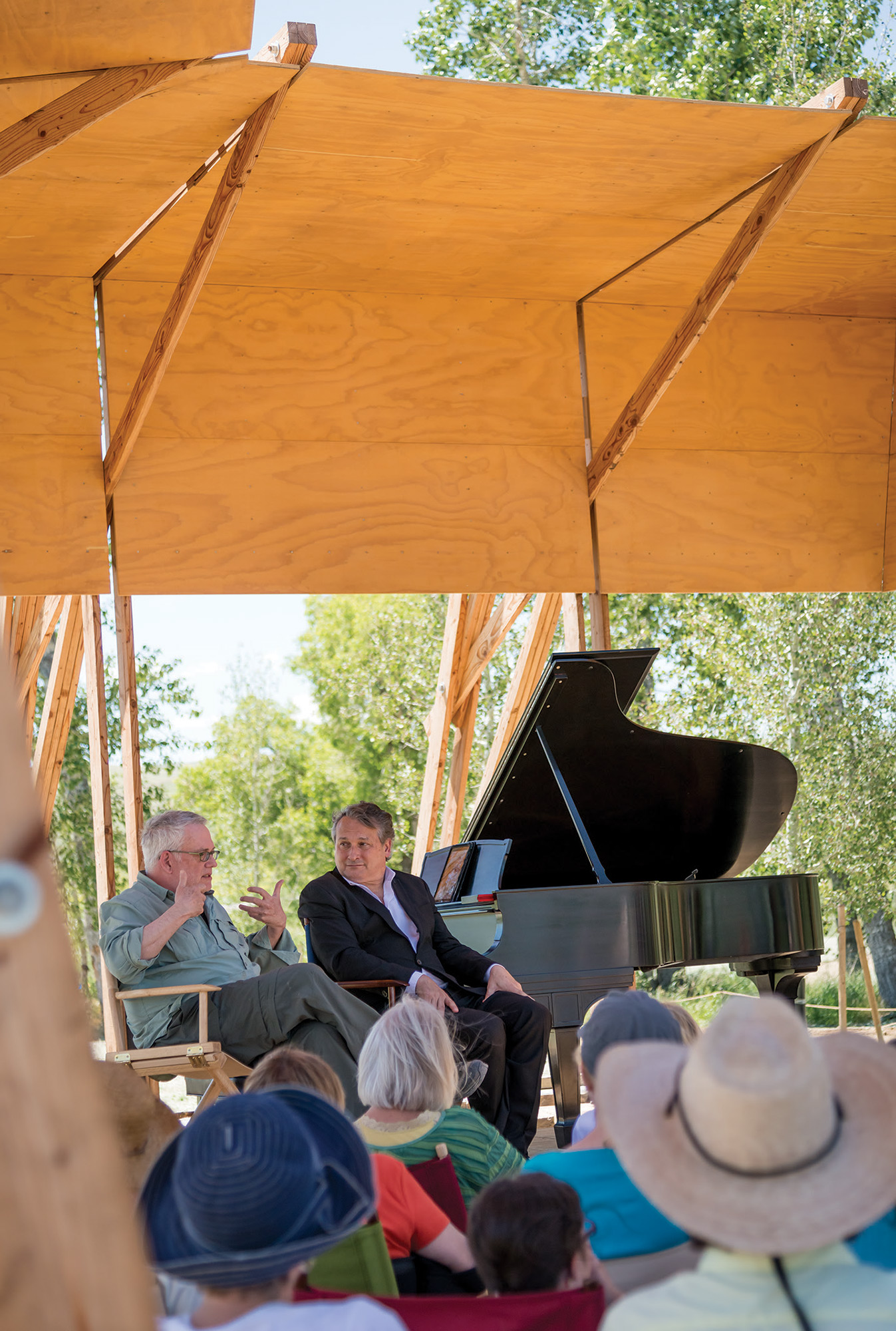 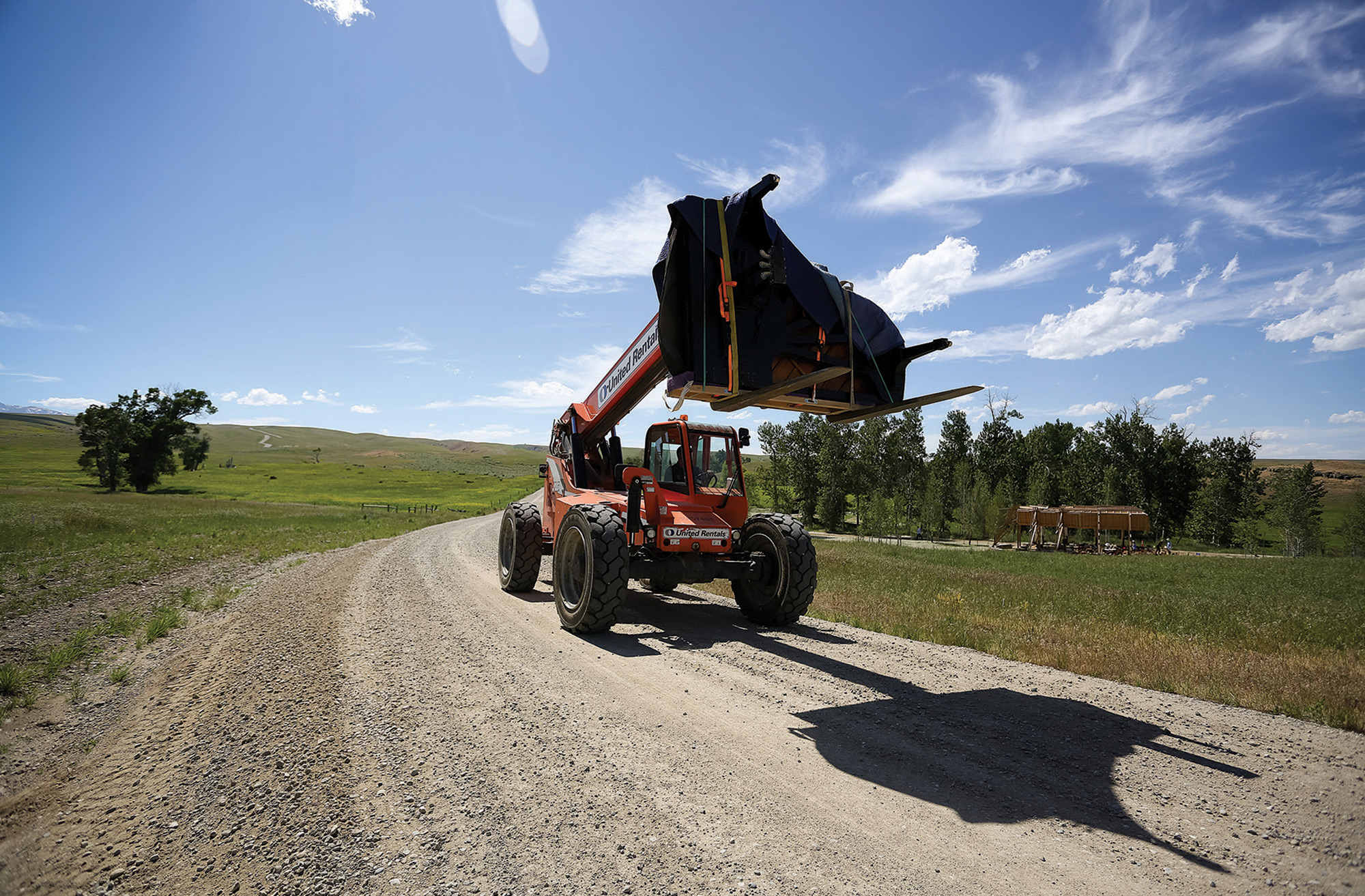 Musical performances take place at various locations throughout Tippet Rise. Pianos are moved accordingly, and then tuned on location. 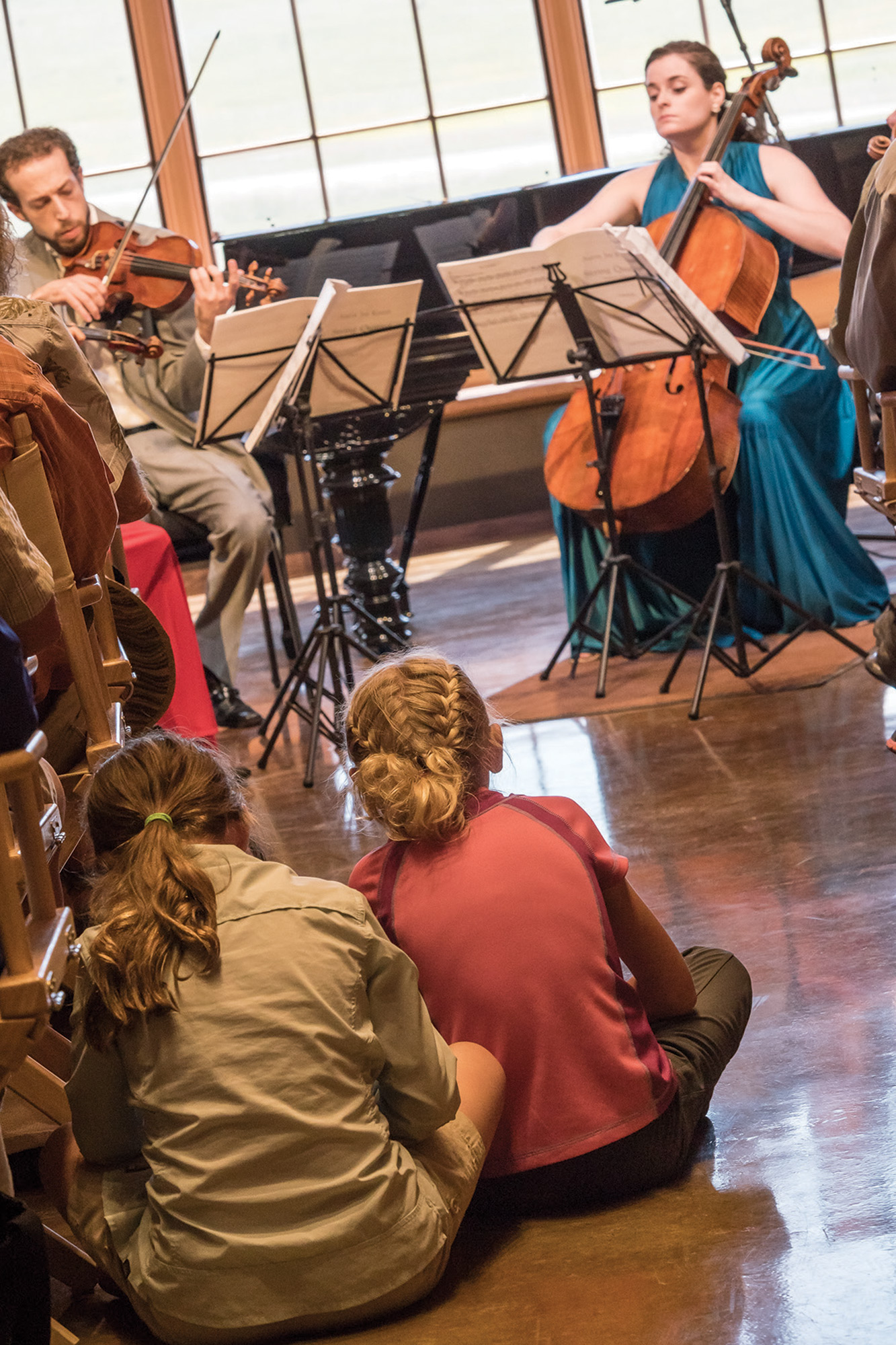 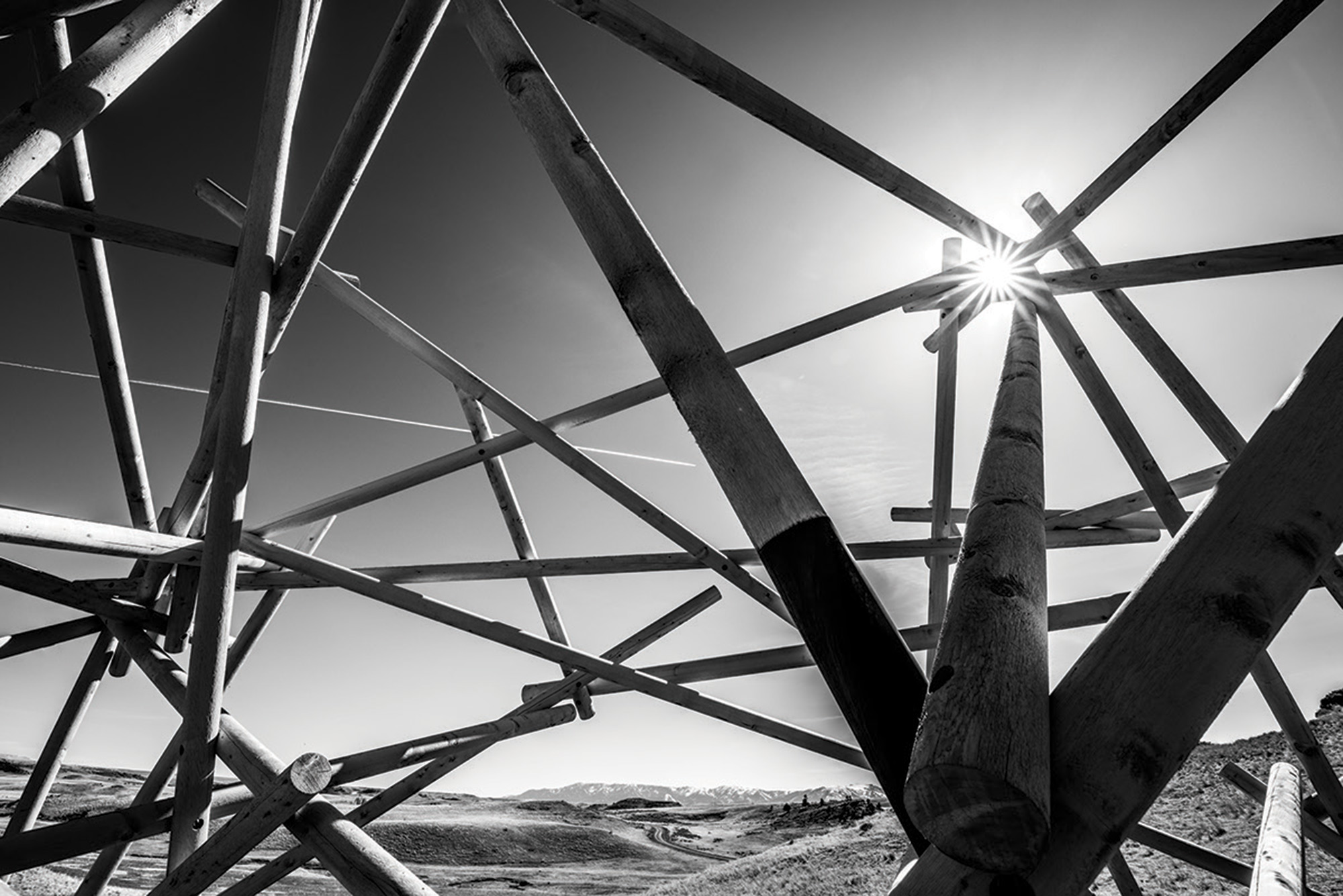 “Satellite No. 5: Pioneer” (in progress) by Stephen Talasnik. 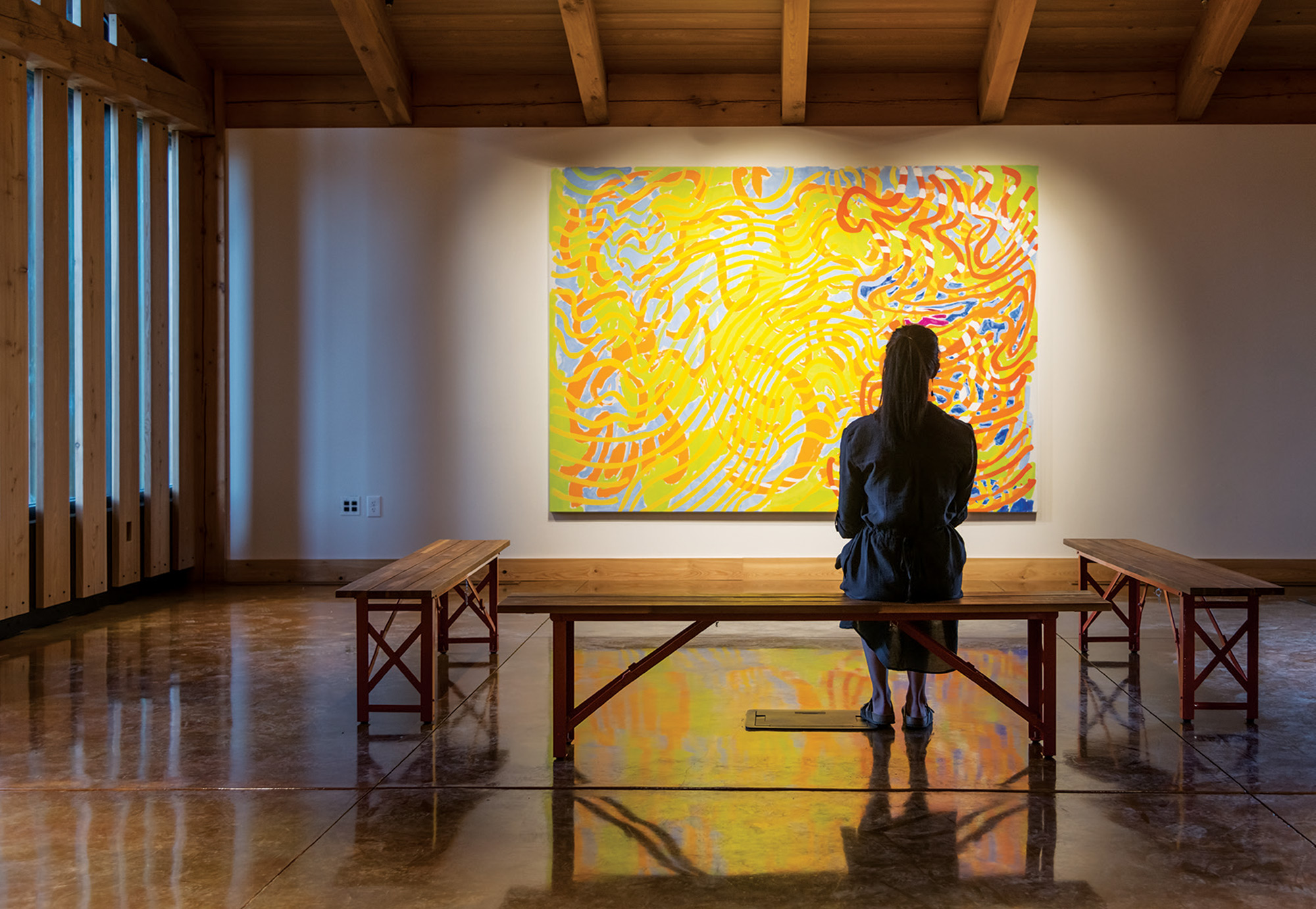 The lobby of the Olivier Barn provides exhibition space for paintings that visitors can consider prior to musical performances. 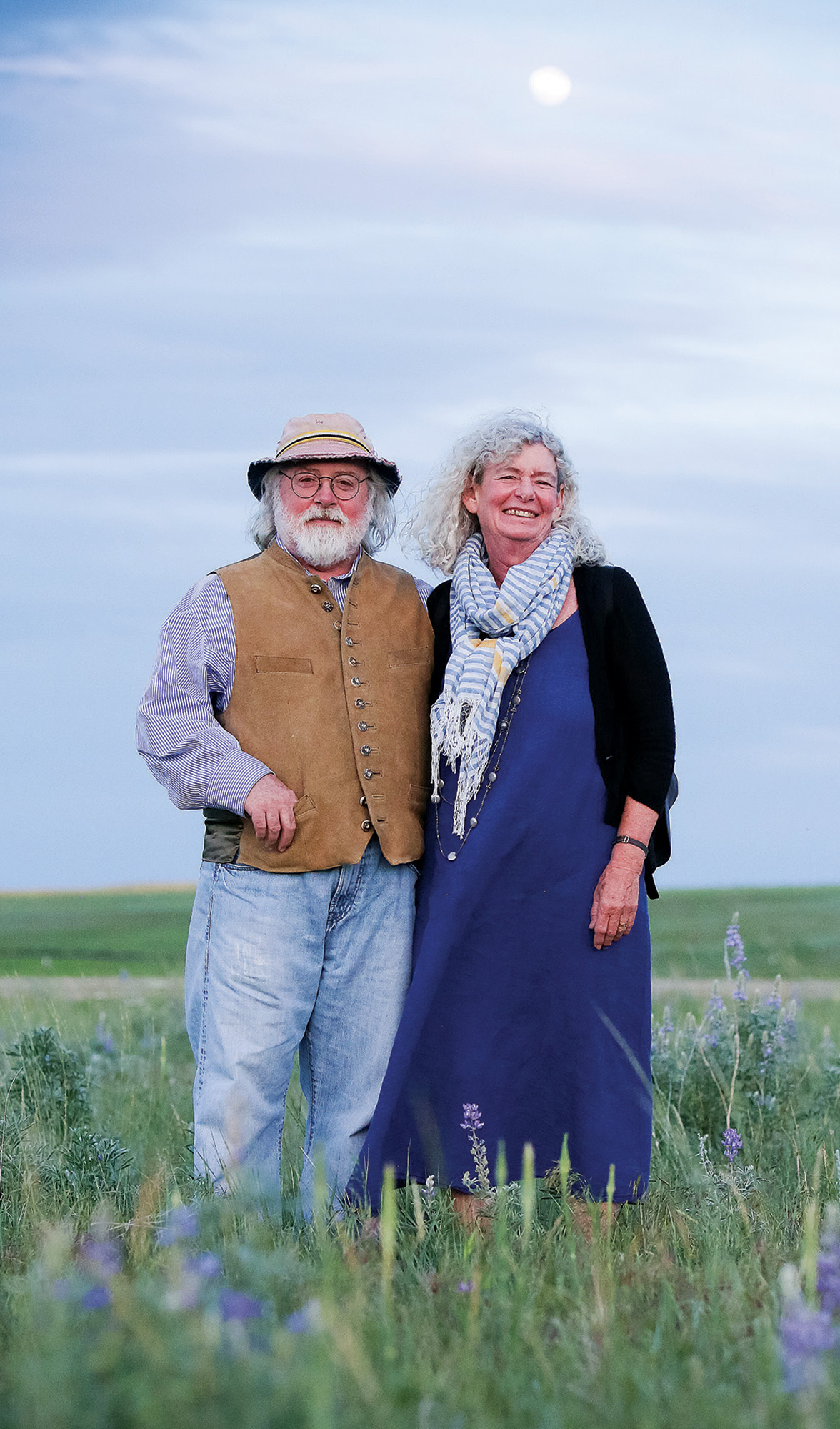