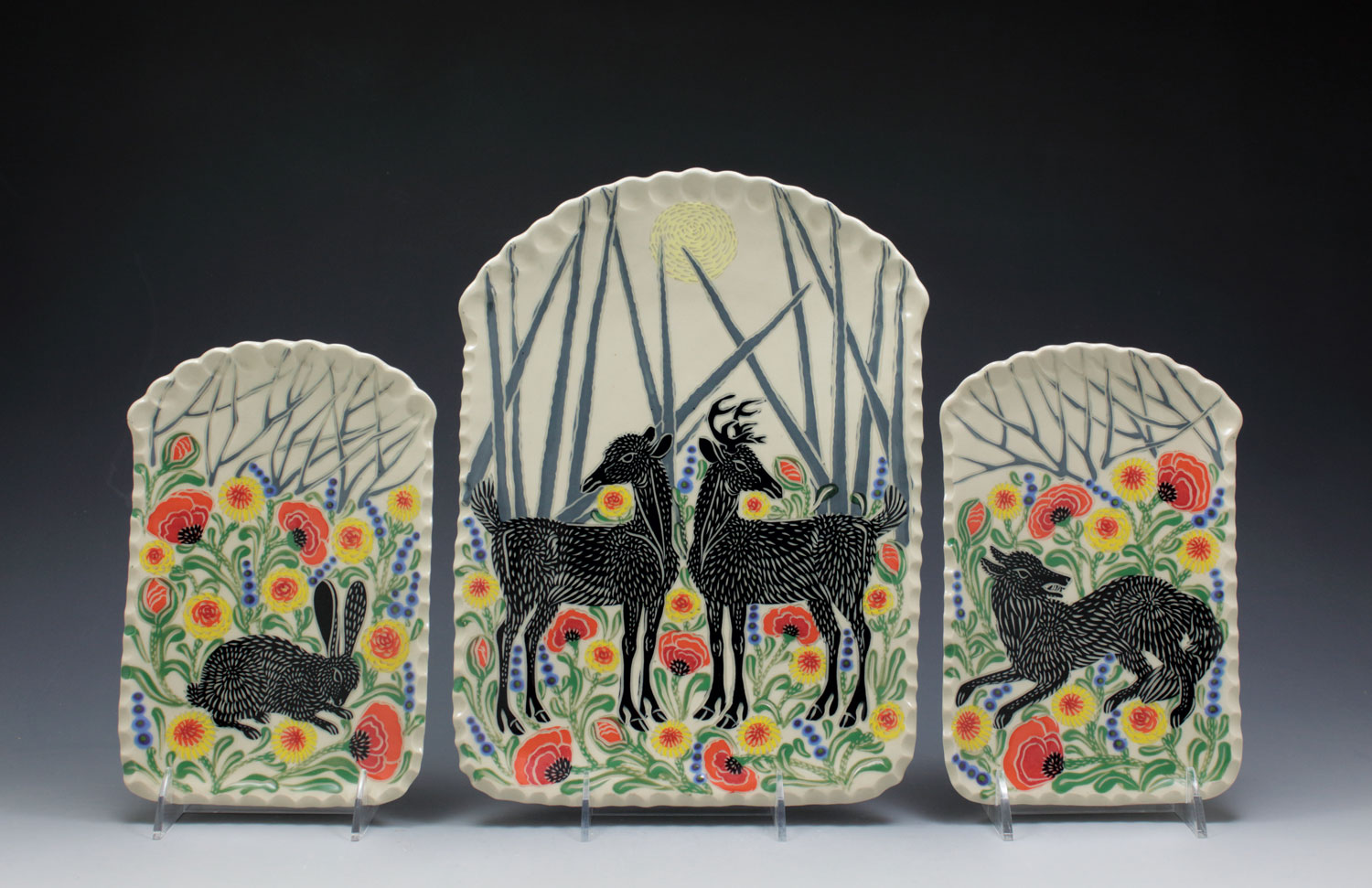 WHEN YOU FIRST ENCOUNTER SUE TIRRELL’S CERAMICS, you might feel a hint of nostalgia or a nagging sense that you have seen something vaguely similar somewhere before. But where? Perhaps in one of the fairytale books you read as a child — Aesop’s Fables or The Brothers Grimm. Maybe it’s a piece of folk art hanging in a living room in a distant memory, or, in the case of her sculptures, a Victorian Staffordshire figurine, perched on a mantle. But as you study the animals, people, and bright floral backgrounds, you realize you’ve never seen anything quite like this. 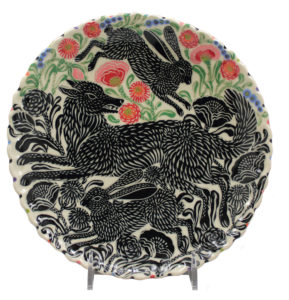 Tirrell references elements of all of these influences and others in her work, then she elevates them to create functional wares and sculptures that are wholly unique. But even as she blends various styles, that feeling of familiarity remains — which is part of what makes her work so immediately approachable and captivating. Her subject matter resonates on a deeper level as well: Humans have been depicting animals in art for 30,000 years, and Tirrell’s work dovetails with that long-standing tradition.

Born and raised in Red Lodge, Montana, Tirrell’s passions were apparent early on: She cared deeply about animals — especially horses — and she loved art. “I knew I wanted to go into art, that was about all I had,” she says, thinking back to her early college years. With a background in drawing and painting, ceramics wasn’t on her radar until she squeezed into an already-full pottery class. “Actually, I ended up really not liking the class very much,” she says. “It was so foreign to me, I had never worked in clay. But I was so interested in all the things that could be done with it, and I decided that I was just really determined to get it. So I pretty much made my home in the ceramics studio.” 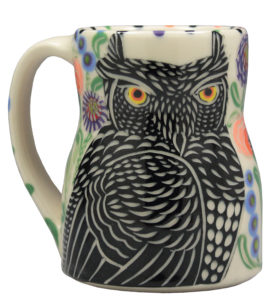 Her teacher told her about the strong tradition of clay in Montana — Rudy Autio, Peter Voulkos, the Archie Bray Foundation — and Tirrell embraced it. “That was really exciting to me, to realize I have this whole treasure trove of artists who come from where I’m from, and I’d had no idea,” she says.

Tirrell transferred to New York State College of Art and Design at Alfred University (a mecca of ceramics), but was stymied when all of the ceramics classes were already full. “So I took printmaking. And I was really bent out of shape about it, and grumpy,” she recalls, laughing. But the situation turned out to be fortuitous. “I just really ended up loving printmaking, and the process of carving, and that aesthetic of really laborious, intricate detail.”

Once she was able to get into ceramics classes, those printmaking techniques showed up in the illustrations on her pots. “I think my drawings always tended towards that style, like old children’s books with woodcut and linoleum-cut illustrations that are maybe a little more sinister or dark and really full of graphic detail.” 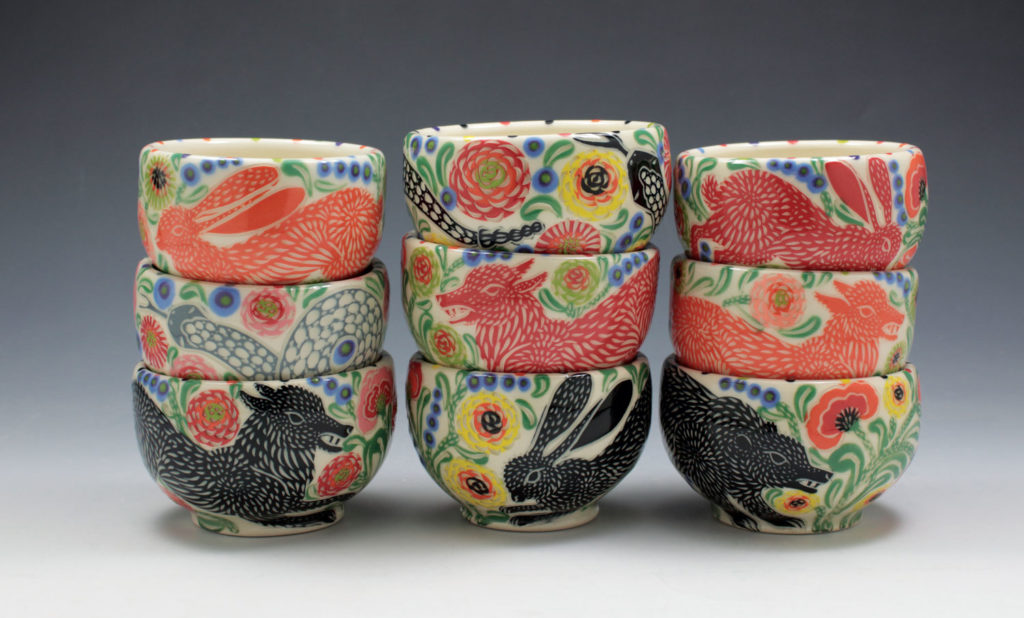 Tirrell returned to Montana with a tool kit full of techniques borrowed from other art forms, and she began incorporating inspiration from the landscape and culture she grew up in, which included rodeo queens, farms animals, anglers, and the legacies of Charlie Russell and Frederic Remington. Her work is both meticulous and free, full of gesture, story, and whimsy. 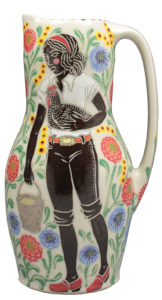 “She’s got this great sensibility,” says Nikki Todd, owner of Visions West Gallery, which represents Tirrell’s work. “There’s sort of a naiveté to it, but it’s very tongue-in-cheek. It’s folkloric, but it’s more sophisticated than that. There’s something that underlies all of it that gives it a great presence.”

That “something” is a thread that runs through Tirrell’s work, nebulous and indefinable. Her pieces are narrative, but the plot line isn’t immediately apparent. Her creatures are caught in a snapshot of their daily animal lives, peering at us over their shoulders, offering only a glimpse of their world. “I think I make them all kind of sidelong, so you’re not quite interacting with them,” says Tirrell, mulling over her depictions, and the mystery and mythology that she sees in animals. “They have their own little life in that space, and you’re only kind of invited in.” 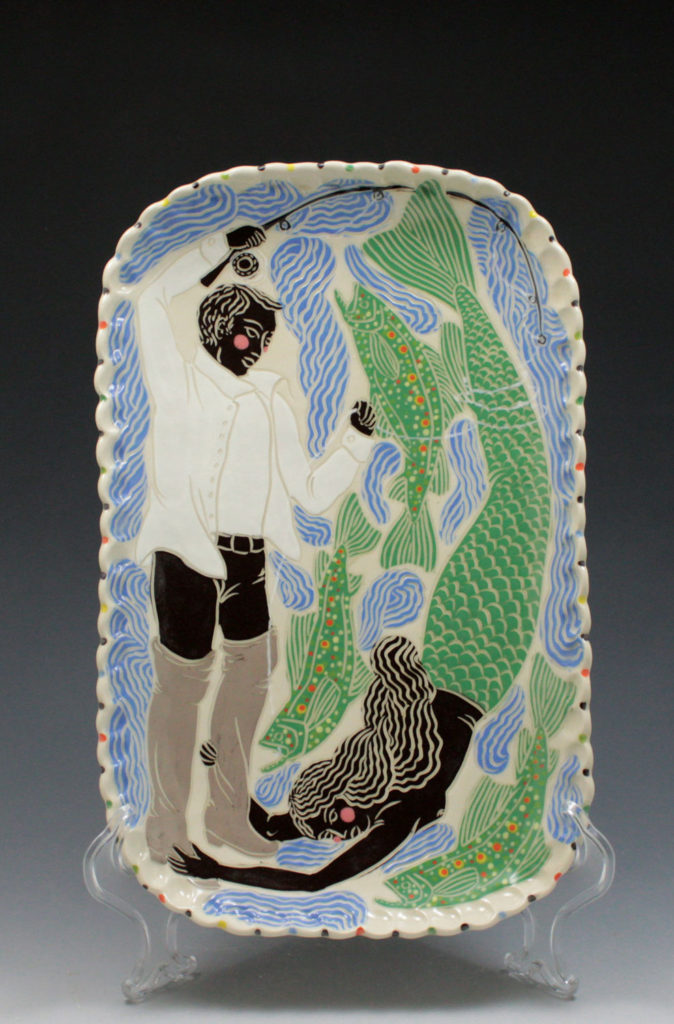 Tirrell has been widely recognized for her work, and her pieces reside in collections all over the world. She teaches workshops throughout the U.S. and enjoys the opportunity to share her techniques and passion with other ceramicists. But even as she’s gained international acclaim, her approach to her work is still down-to-earth and full of joy. “I’m not just making pots to make a living,” she says, “I really love making pots.” 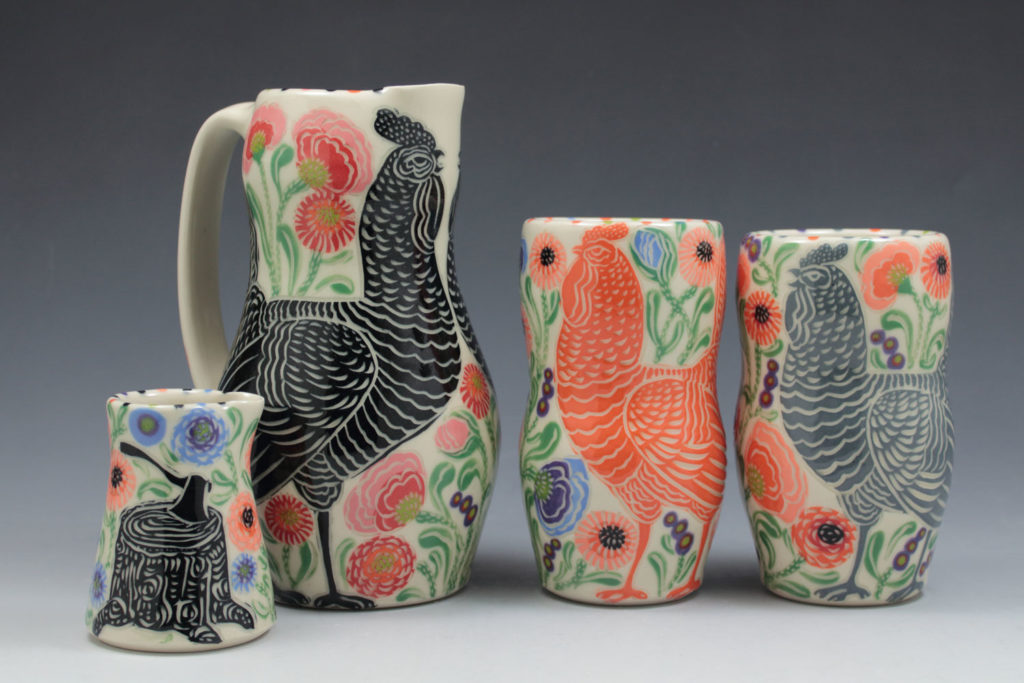 Chicken Pitcher with Tumblers and Beaker

And, just as much as she enjoys the creation process, she also appreciates connecting with those who buy her art. “I love talking to people about why they use my pots, because everybody’s drawn to something different. People pick animals for very specific reasons, and I love to hear those stories,” she says. “They keep me going and keep me motivated in the studio — somebody needs this pig on their plate!” 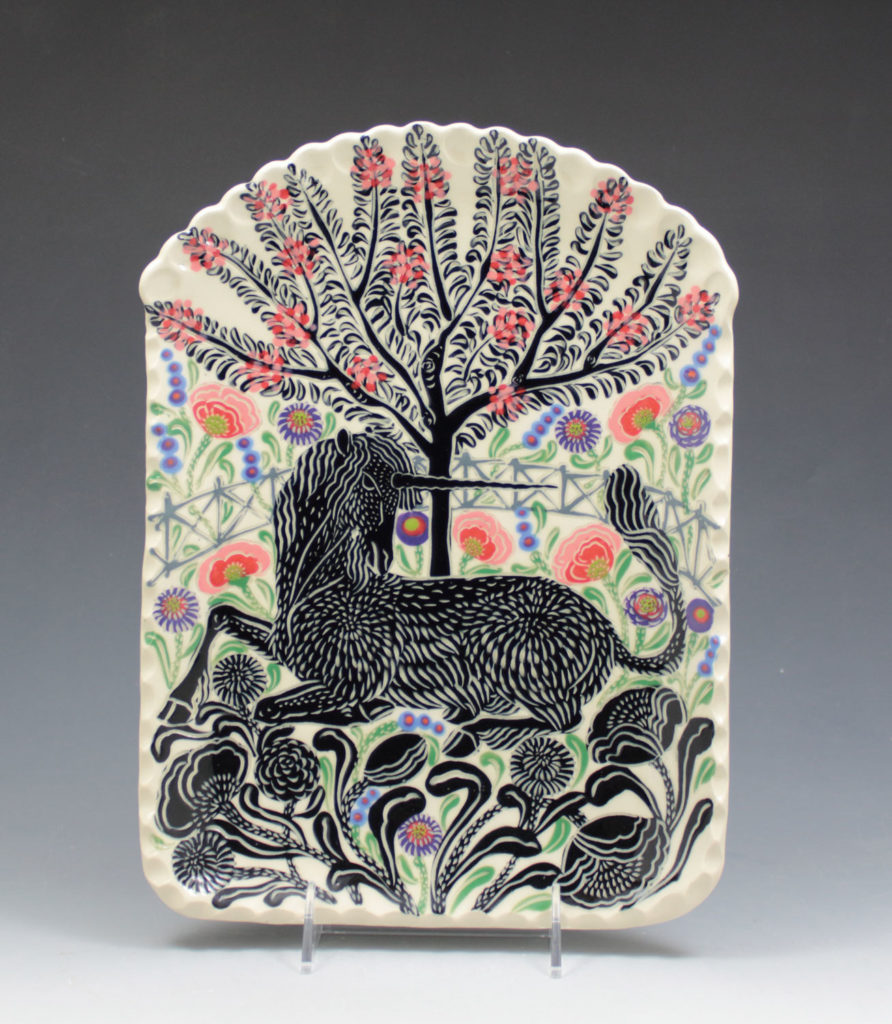 Unicorn in the Garden Platter