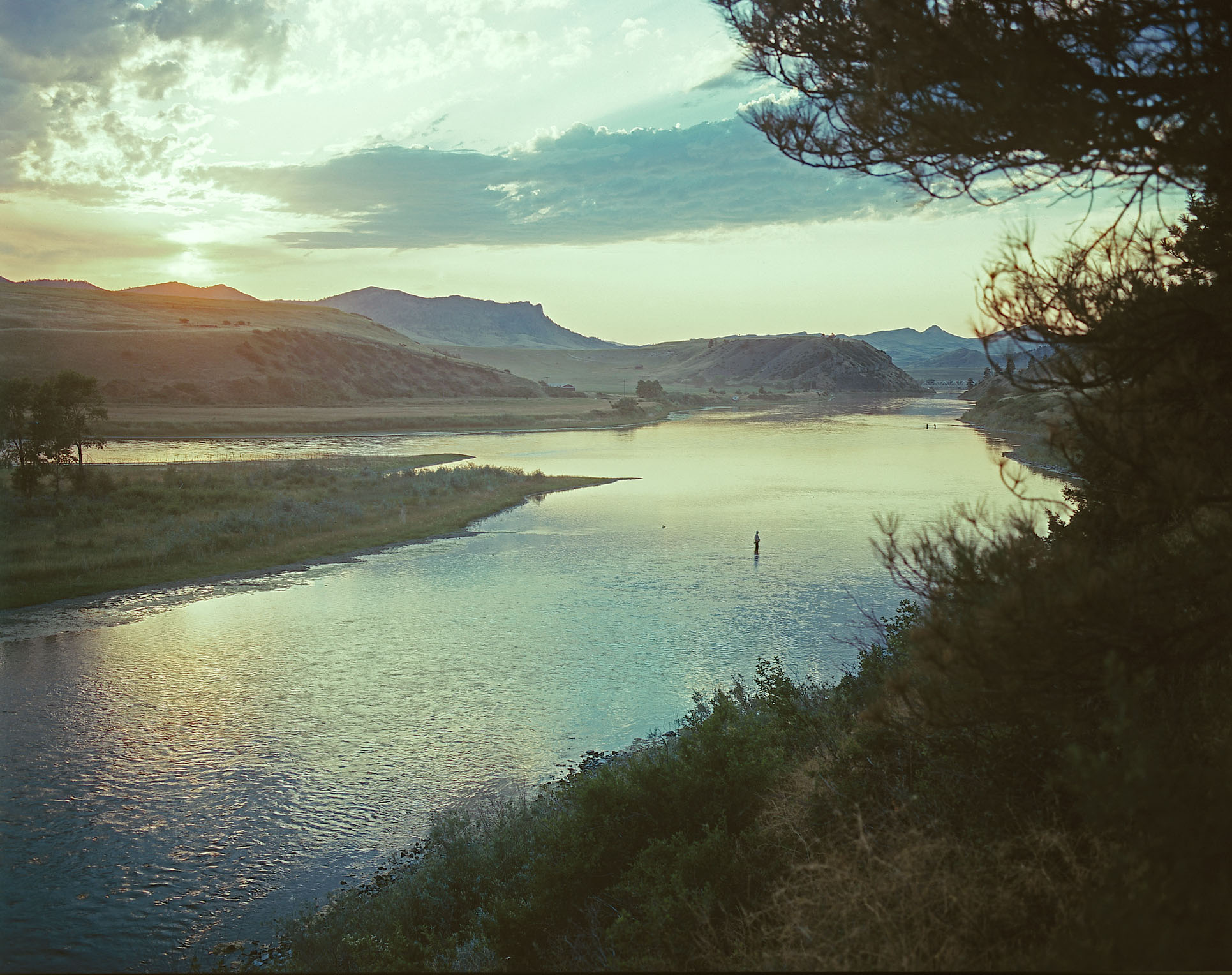 MY FISHING LIFE WAS SPAWNED SOME 60 years ago in the waters of the Little Wolf Creek drainage near the mouth of Gladstone Gulch outside Augusta, Montana. Its crystal clear waters ran near my family’s doorstep on the way to join Prickly Pear Creek and eventually hooking up with the Missouri River.

Hundreds of fishing outings have filled my life since then. My youth was anchored in nature. By high school the outdoors so captured my interest that I pursued it full-time: To hell with the future if it didn’t include fishing. Gradually, I developed an interest in photography and my eye was drawn to the eagle.

It started on a stream near Wolf Creek. As I fished from one miniature rapid and emerald green pond to another, Golden Eagles were flying in and out of rock bluffs nearby. Advancing along the stream I came closer to the outcroppings and was finally able to see a stick and grass nest built into the cliff. Propping my pole against the willows, I walked toward the nest.

That was in 1968 and I am still walking with the eagles. I have photographed them year in and year out, using Kodachrome film and my 400 millimeter lens from blinds that I’ve built in the rocks. Raptor expert Dr. David H. Ellis has helped with my field research immensely, but much of what I have learned comes from long hours of watching the eagles’ way. 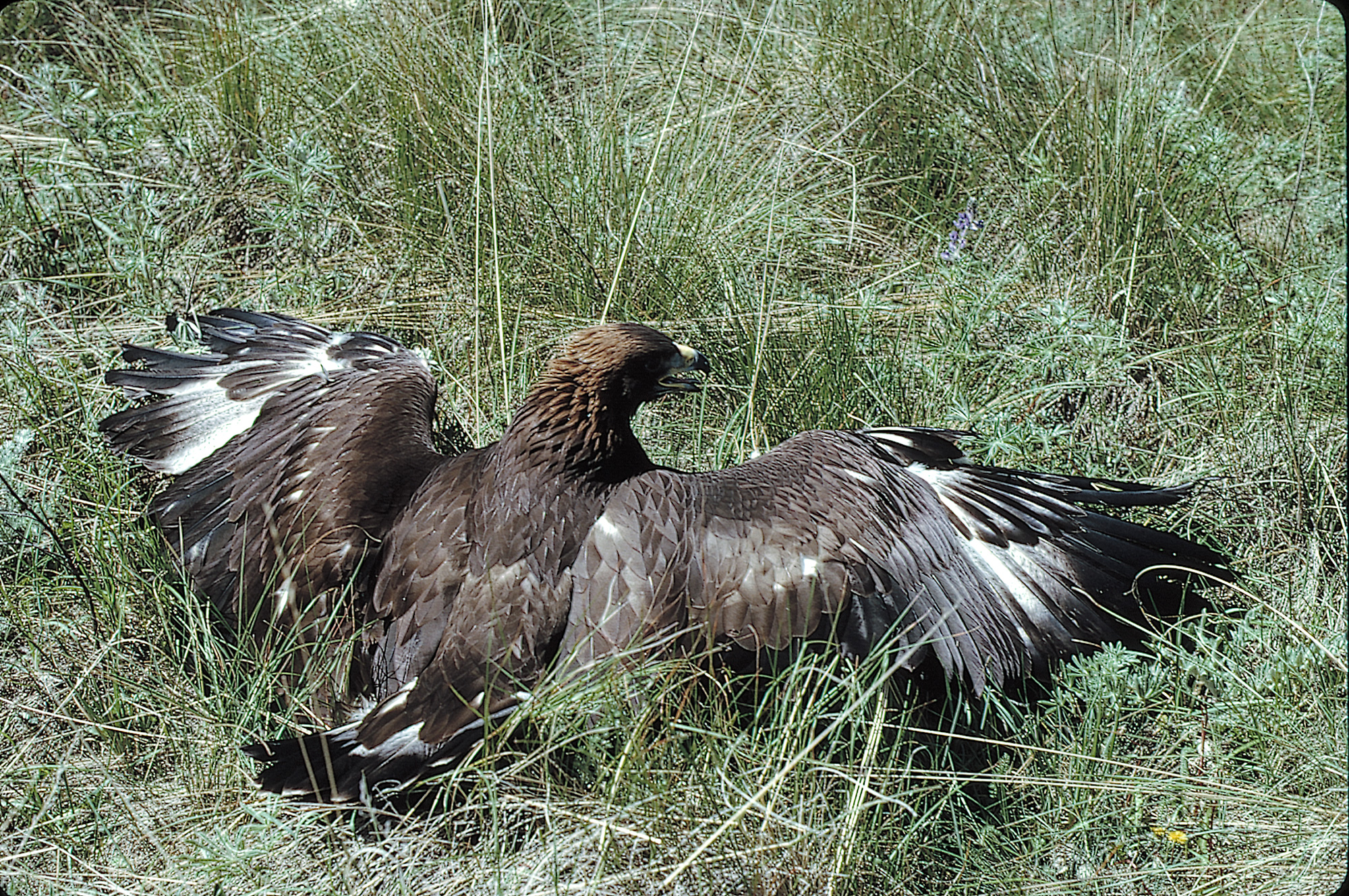 Crash landing. First attempts at flight are short and wobbly, ending in a not too pretty landing. The fledglings will gather the wings up, then they will wing flap and walk to the next take off spot. After resting a few minutes or hours another attempt is made. Each one longer and stronger and with much better landings. 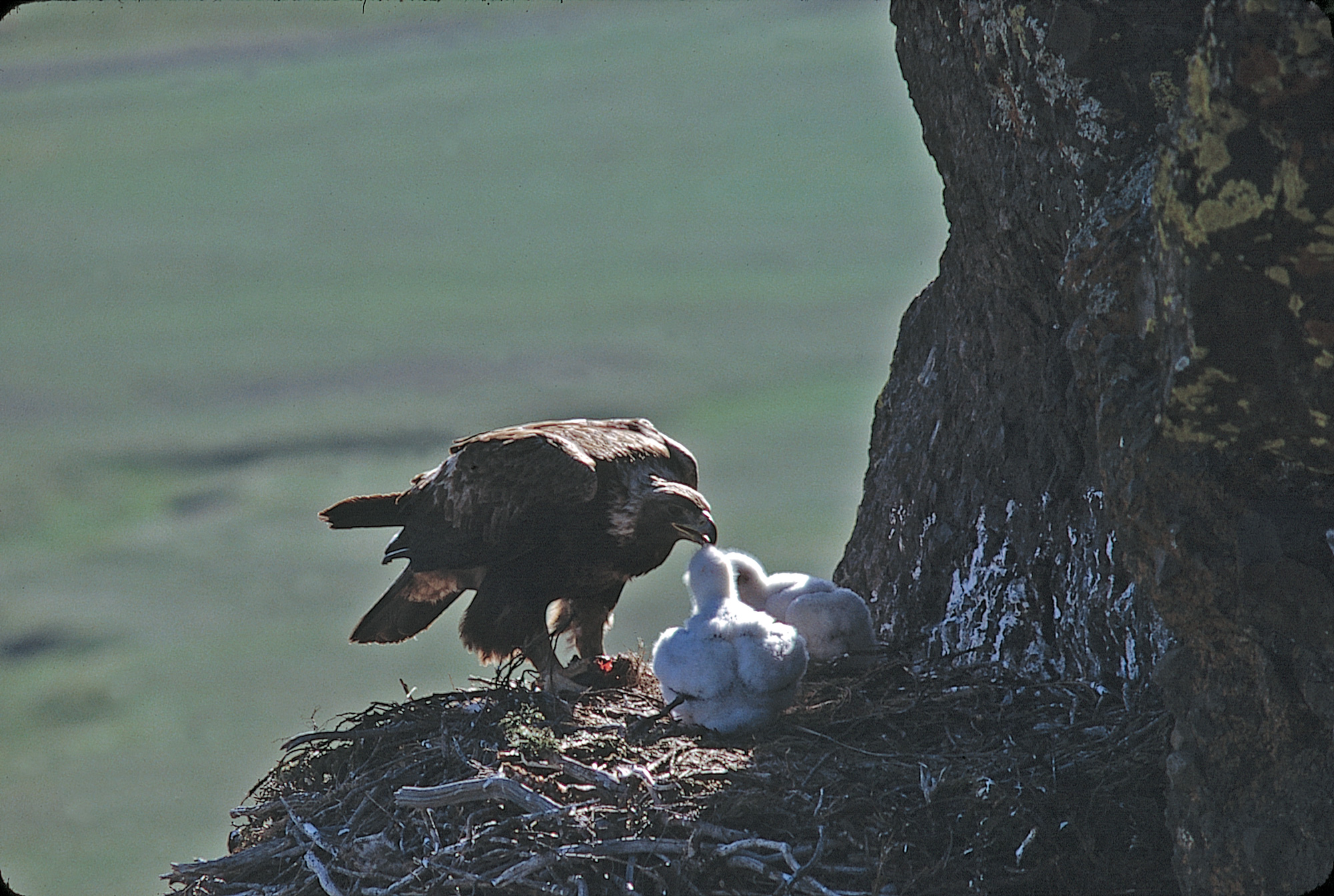 The marmota bluff. This pair of eagles have only one nest in the 30 to 40 square mile area required as their territory. The other extreme is nine different nest sites. Usually two to three are the average for a Golden’s territory. 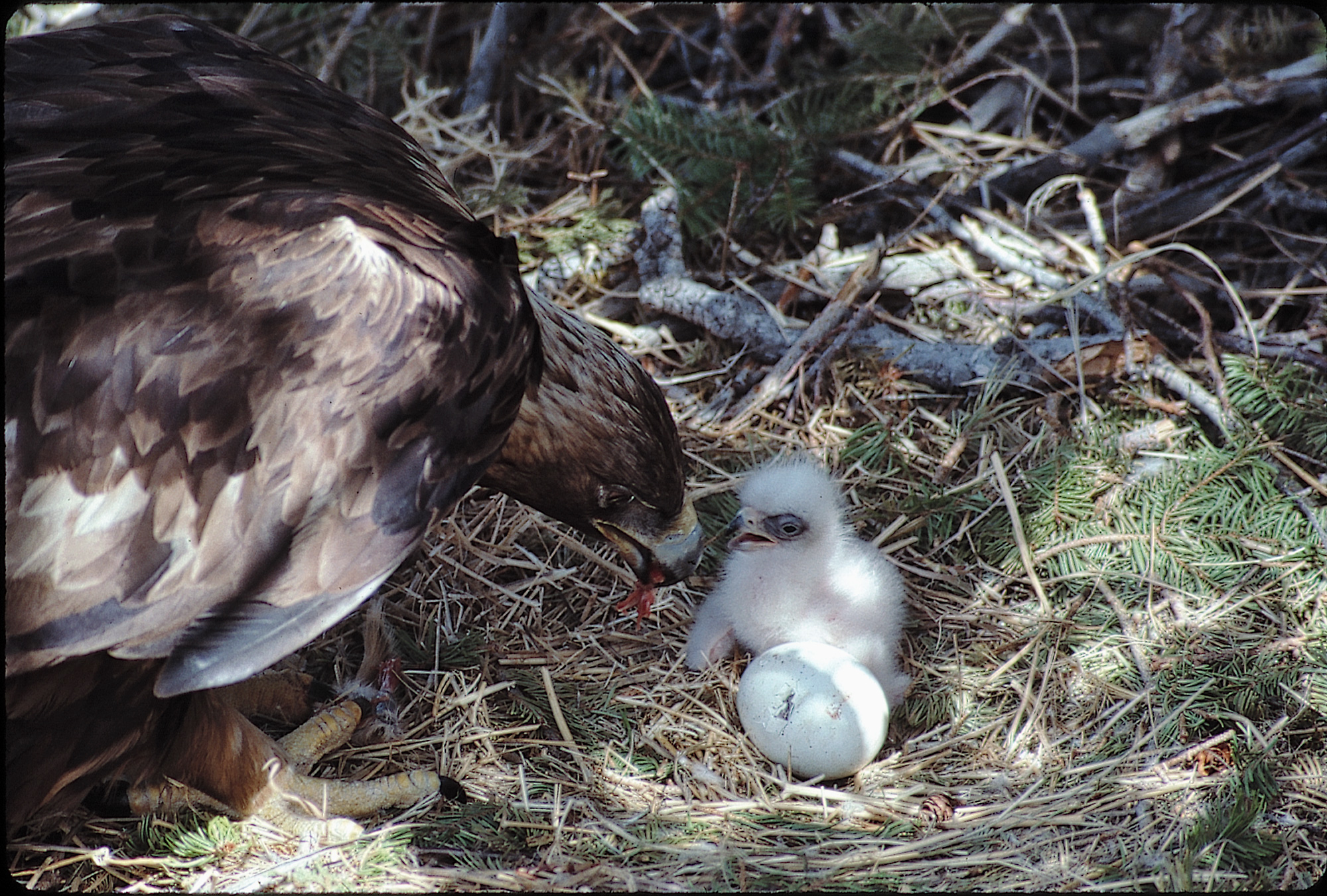 First feedings. A very, gentle act. The giant birds will present sizeable morsels to the hatchling who will fall on its beak or forward, patiently the nourishment is presented until the chick grasps and swallows. 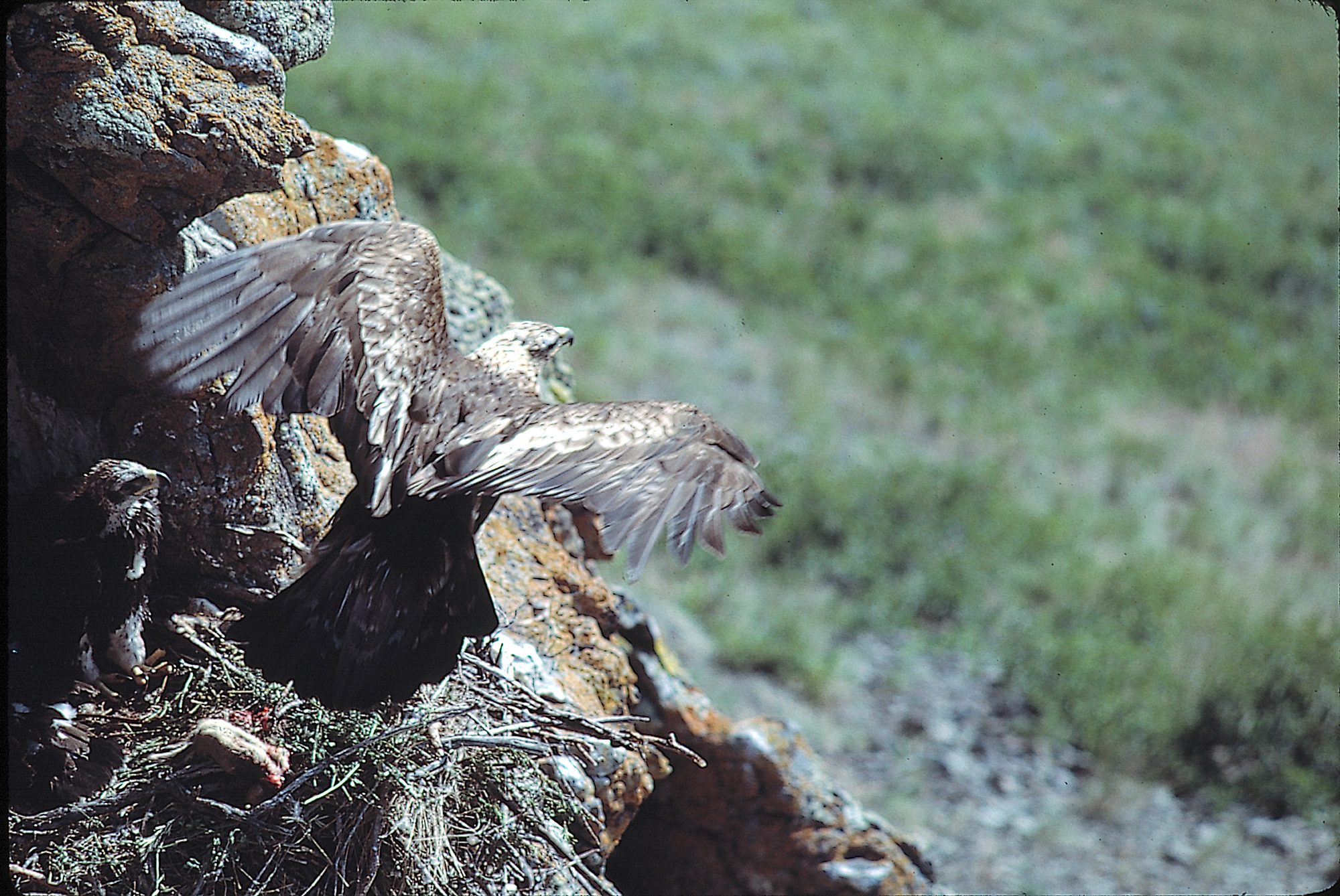 Falcon hollows. The male lifts from the nest after delivering an adult Richardson Ground Squirrel. The nestlings are able to feed, but usually wait for the female to tear the carcass apart. Weight loss is common because of the fast growing feather tracts. 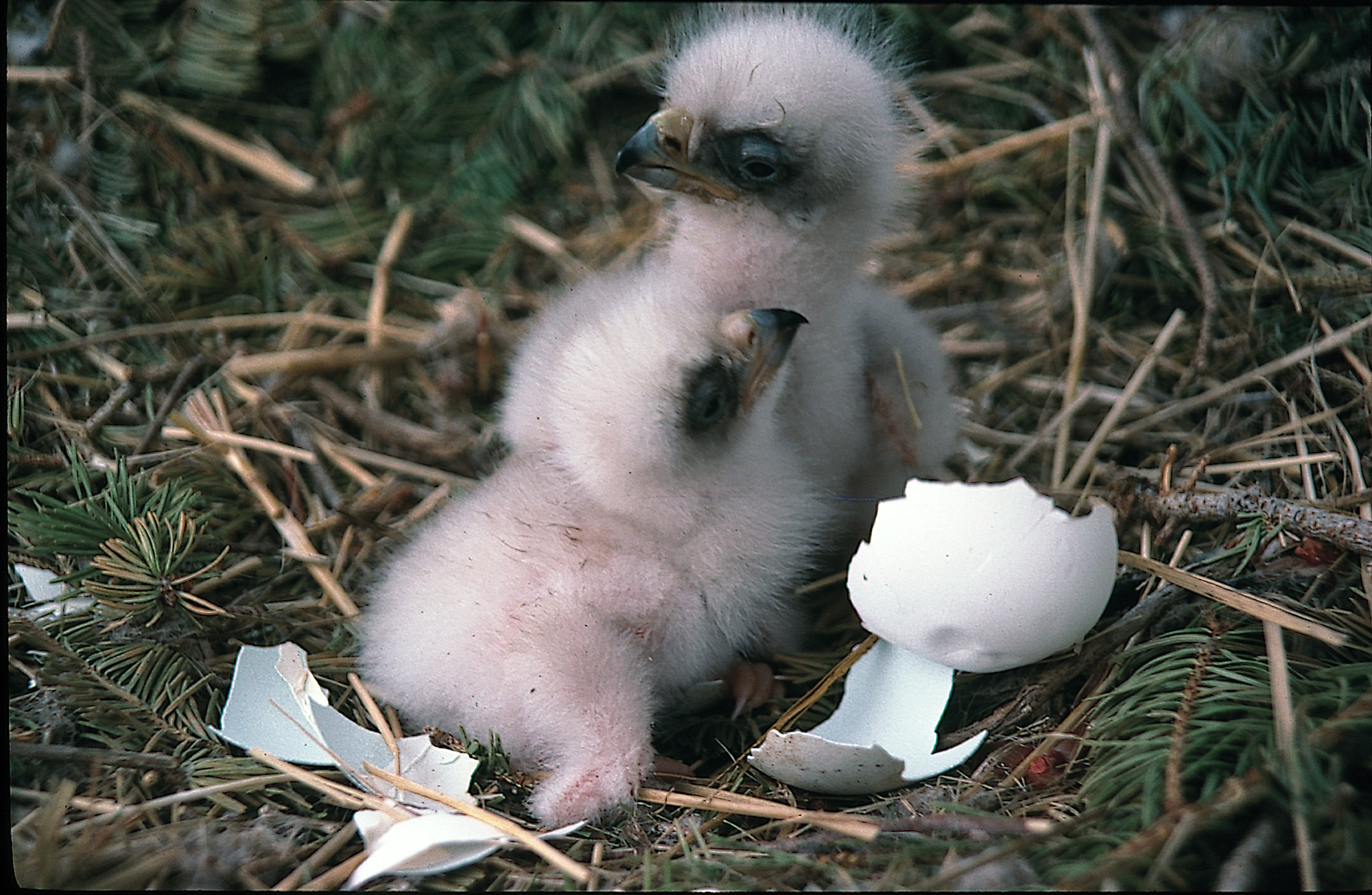 Hatchlings. Tipping the scale at 100 grams — one quarter of a pound or 3 to 4 ounces, the newly hatched eagle will join his two-day-old sister who almost doubled her weight. The egg tooth will be present for three weeks. 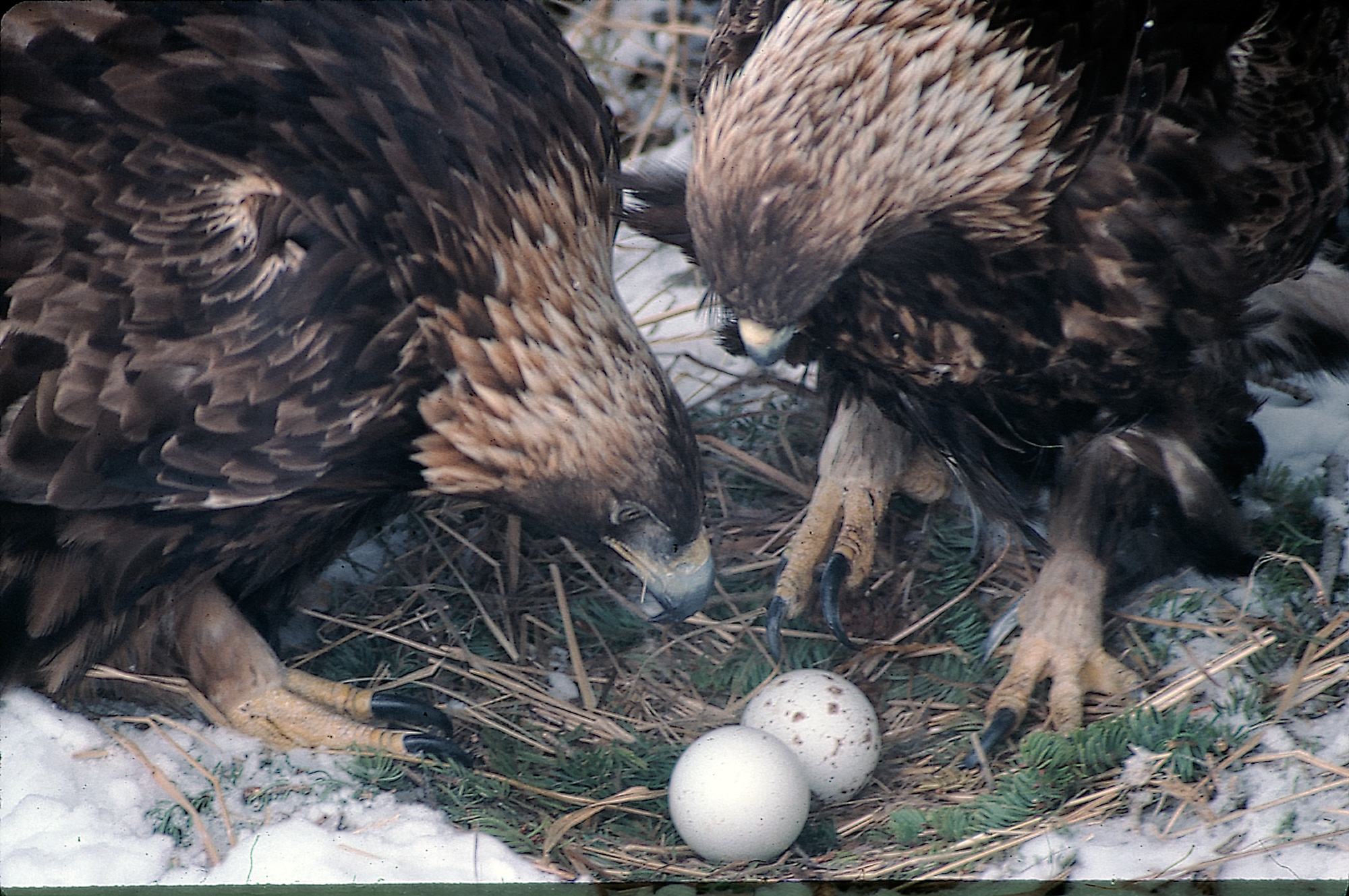 Careful now. The male Golden Eagle lifts gently from the eggs 28 to 29 days into incubation for 42 to 45 days (late March through early May) nesting pairs of Golden Eagles will endure the harshest of weather extremes. Females will perform the majority of the confining task with relief from her lifetime mate seven to nine times a day. She will incubate all night. 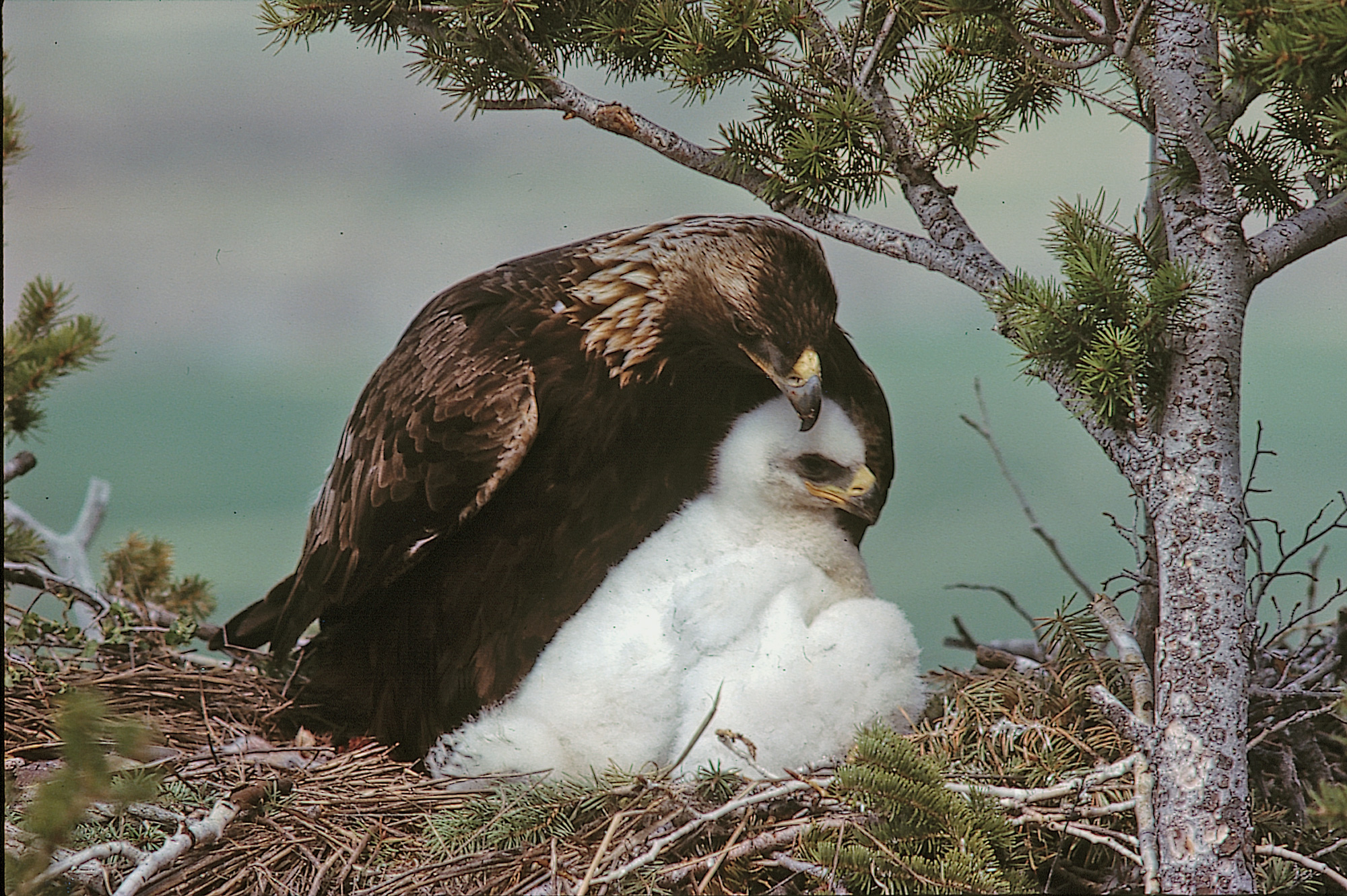 The protector. A thunderstorm with strong winds is approaching. The Golden Eagle are the most ferocious and proficient predators but for 10 months of the year they are the most delicate and dedicated of parents. 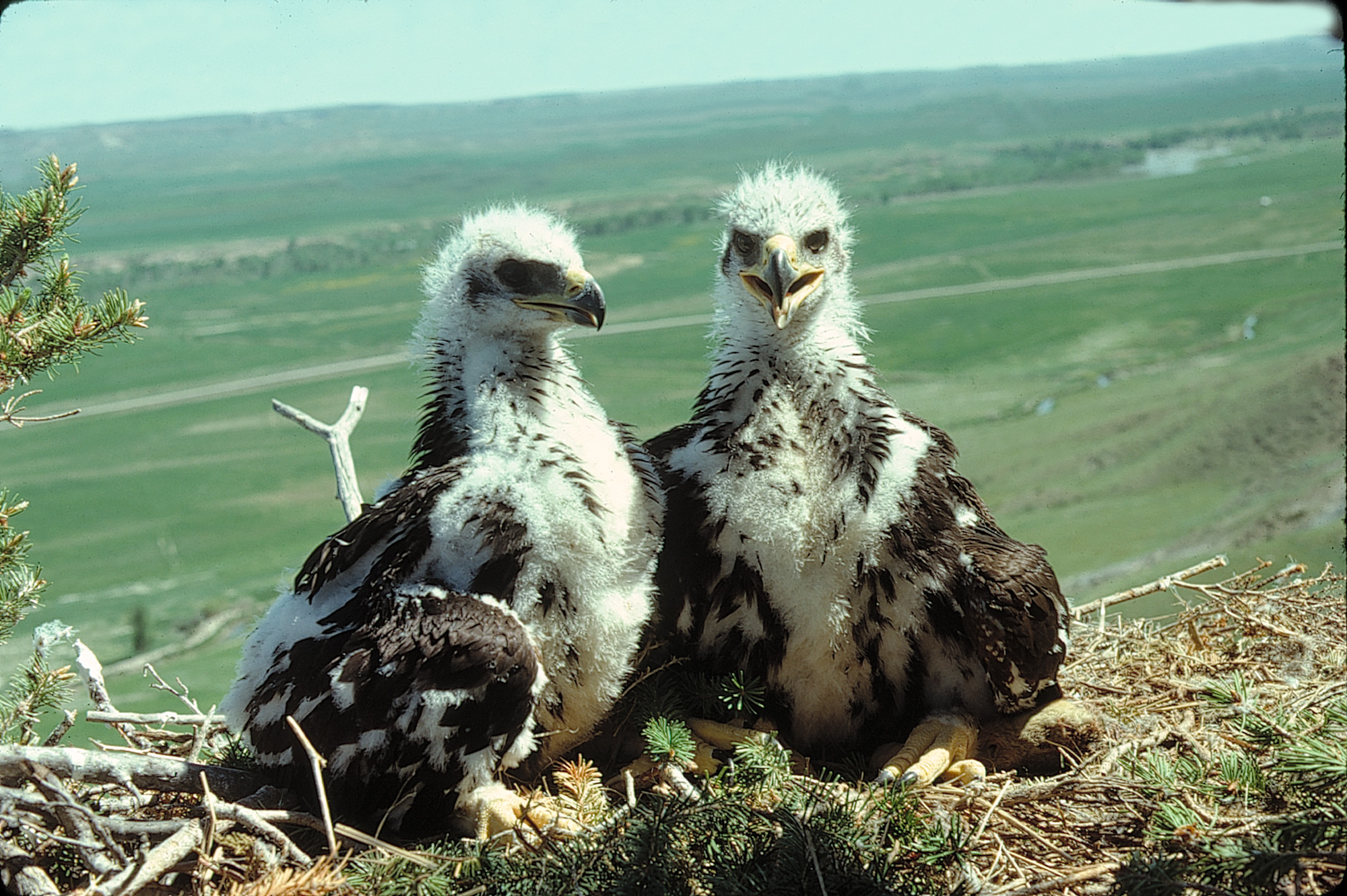 Mosaic look. Thirty-four to 36 days after hatching the nestlings are able to walk and stand more, but still lie down most of the time. Their “buzzard” look is disappearing at this stage. 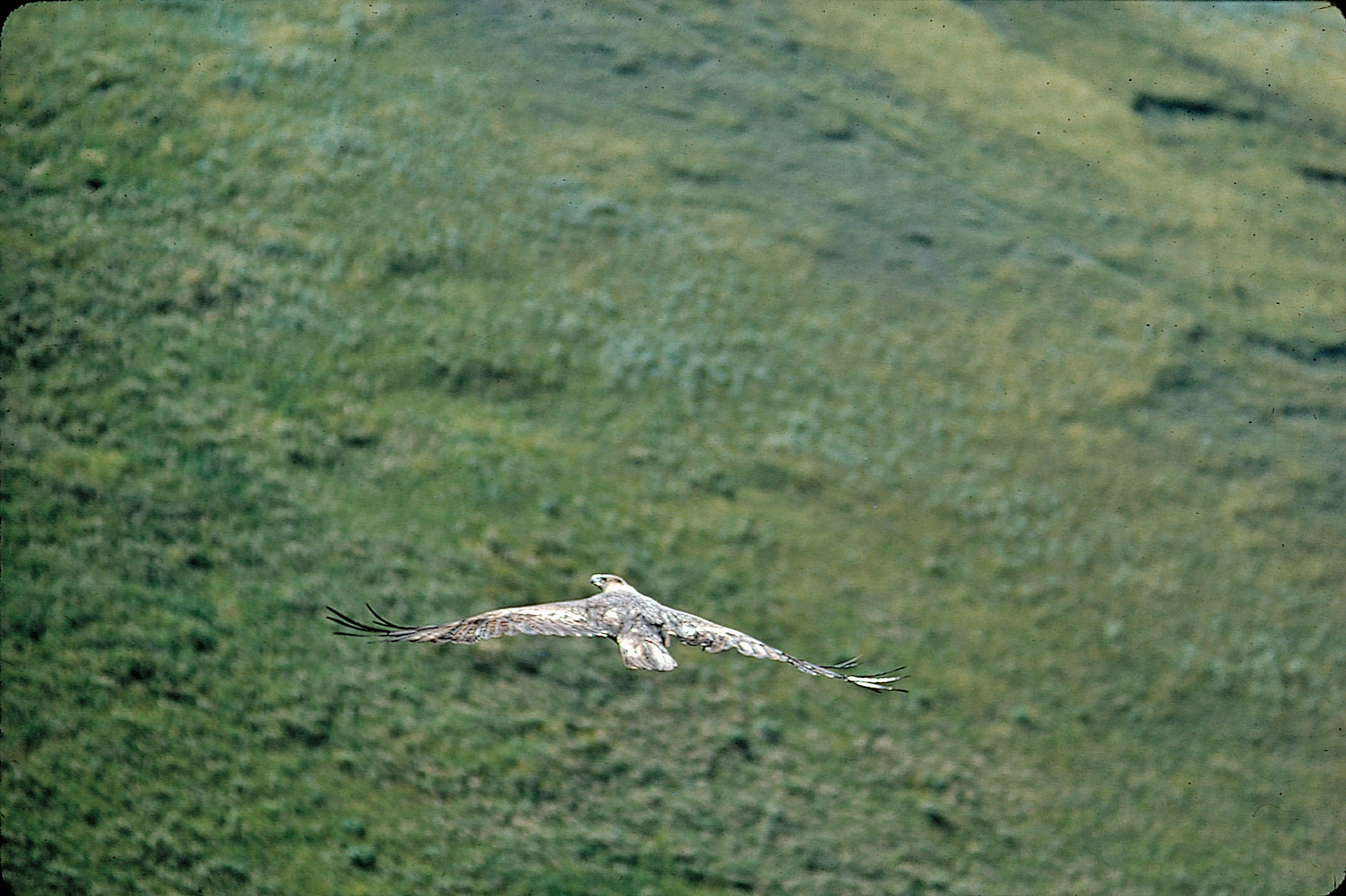 Golden eagle country. Golden Eagles make their living in direct pursuit and gathering prey from the land. Bald Eagles usually live off the waterways, ponds and lakes. Vast open countryside are preferred by the Goldens. Rock bluffs and ledge provide the nest sites. Gliding or soaring over the countryside, Goldens are always scanning for prey. Wingspans are six feet. Folding these giant wings, they can fall to the ground exceeding 100 miles per hour. 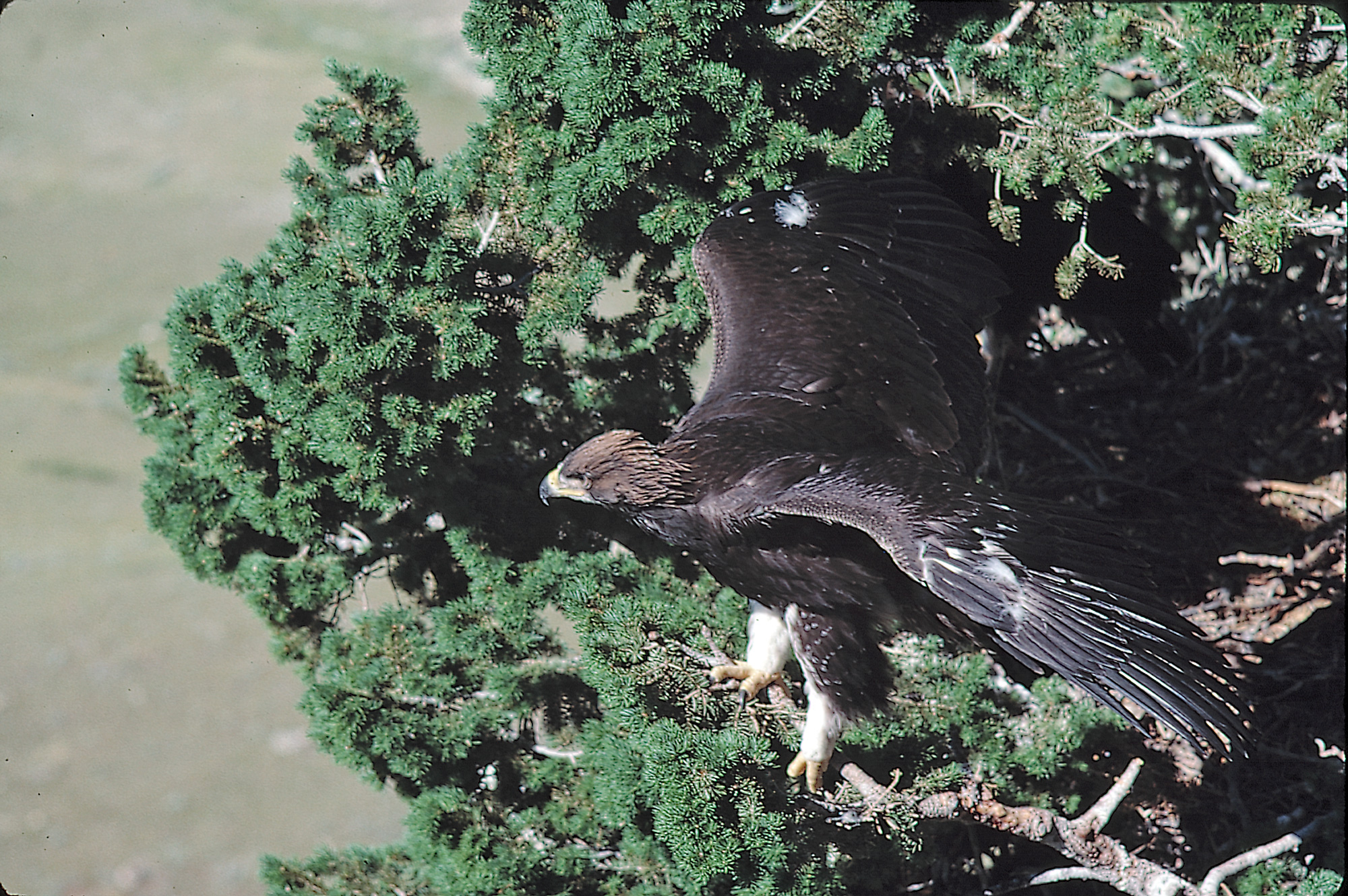 Ready to go. A couple of days before his first lift-off to take on the countryside; only seen the last nine weeks from the nest. This individual bird has practiced like no other fledgling. Just three days away from leaving the nest he was performing flights unparalleled in my years of eagle observations. 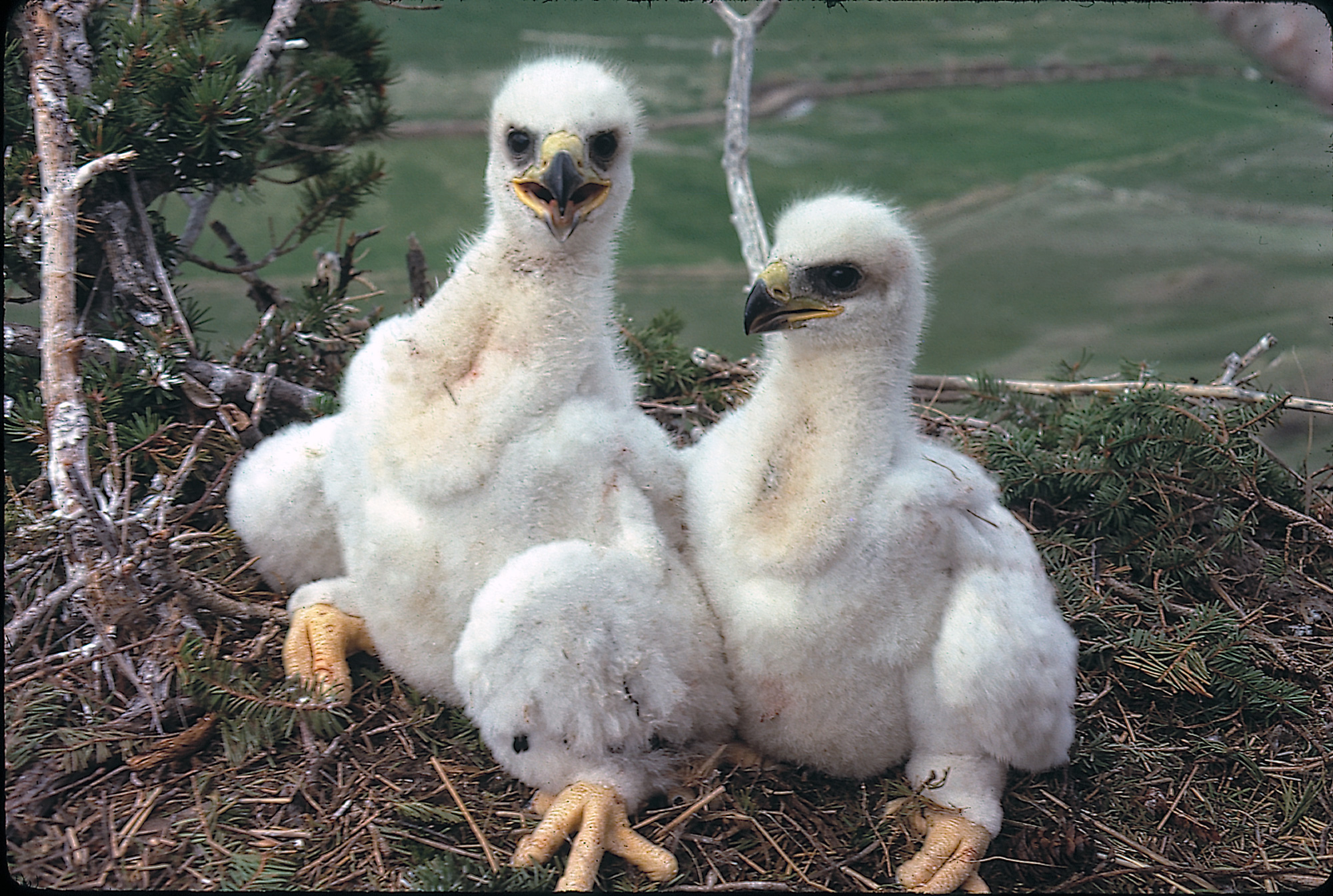 Seventeen to 18 days after hatching or six weeks before their first flights the dominant size of the female is already apparent. Weights will be around 10 times the hatching weight or 1,000 grams. The first feather tracts are emerging. The Rectrices (tail feathers), the Remiges (long wing feathers) and Greater Coverts (short wing feathers) are the first to appear.