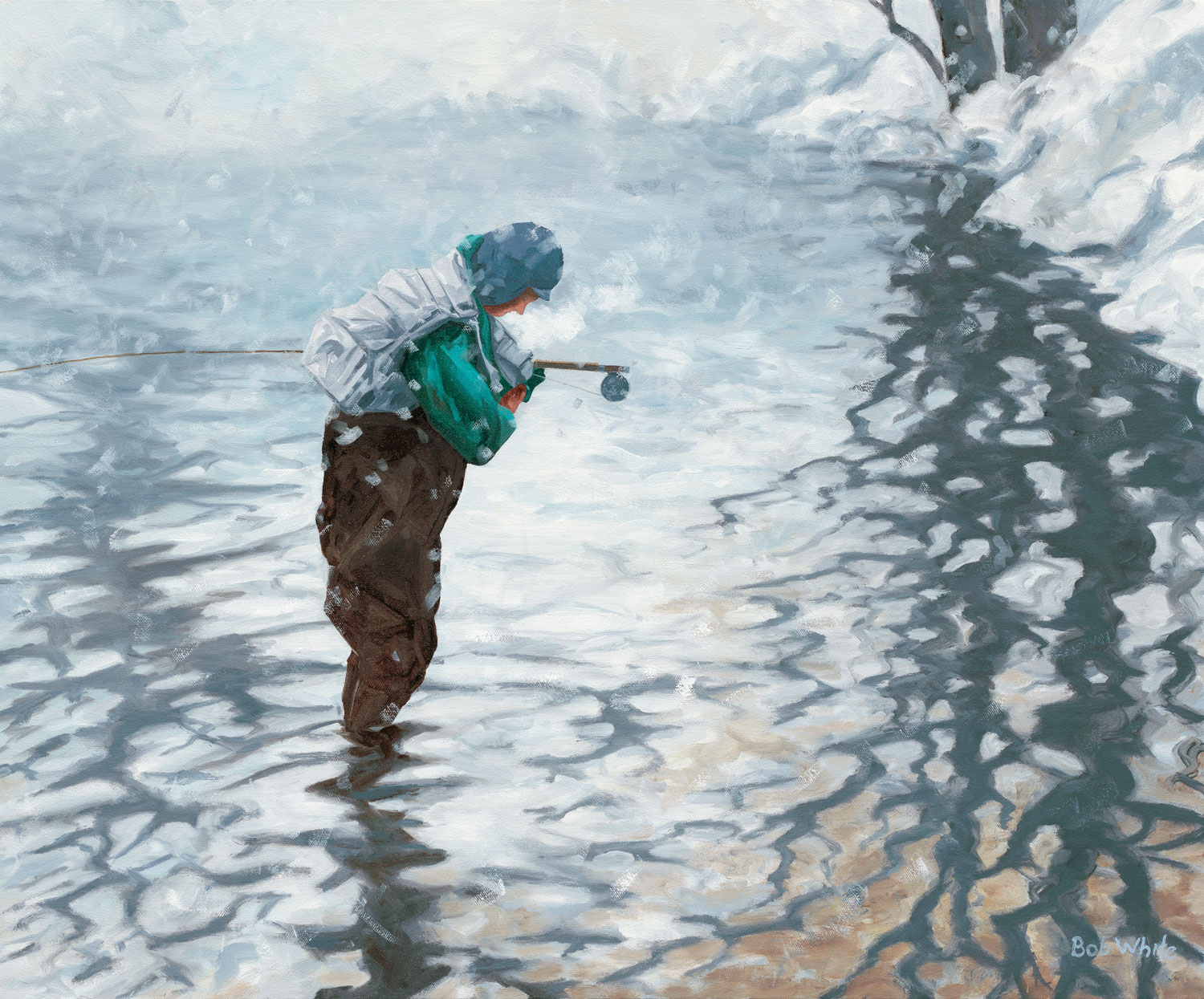 When the going gets tough, the tough get fishing

‘Twas the week before Christmas, and plenty of creatures were stirring in Paradise Valley south of Livingston, Montana, despite the cold and snow. Her face framed by a corona of frost, a whitetail doe eyed us warily from a patch of willows. A nattering flock of magpies and ravens circled the remains of an unidentified early winter casualty, while a bald eagle occupied a cottonwood overhead. With my wife, Lori, and our old friend Dick LeBlond in tow, the three of us trudged through the snow with our fly rods in an act of defiance. Elsewhere around the valley, people were probably drinking eggnog in front of wood stoves and watching football games. Not us.

We were headed to one of Paradise Valley’s famous spring creeks. The stream runs through private property, but Dick, a local resident who knew everyone in the area, had obtained permission for our visit. We were there during the off-season, to say the least. I doubted that anyone had fished the creek in weeks.

When we reached the stream, it seemed eerie and unfamiliar, nothing like what I’d remembered from occasional visits at other times of year. Beneath the heavily overcast sky, the surface of the water looked like obsidian, and the rime tracing the streamside foliage reminded me of an etching. Fed by a reliable spring, neither the clarity nor the temperature of the water varies significantly throughout the year, which was why we were there rather than on the nearby ice-choked Yellowstone River.

We immediately noted activity in the gelid water, as wakes traced delicate V-shaped lines across the surface, punctuated by occasional enthusiastic splashes and the outline of dorsal fins. The trout had not gone south for the winter. The creek looked like an active bonefish flat magically transported from the Caribbean to Montana.

There was no hatch in progress; so much for science and the endless scrutiny of tiny mayfly imitations ordinarily essential to the pursuit of selective spring creek trout. My instincts told me that it was time for junk, the last refuge of a fly-fishing scoundrel. Reaching deep into the darkest corners of my vest, I located a small box of Alaska steelhead flies and dug out an olive wooly bugger. Lori was new to fly fishing back then, and I was more interested in seeing her catch fish than catching fish myself. After checking to confirm that the barb was crimped down (even scoundrels maintain some honor on the water), I watched her cold, fumbling fingers attach fly to tippet. Then she stripped out several rod lengths of line and let it fly.

A first cast strike might have made a good story, but it took several dozen. By that time her guides were icing up, and I was building up domestic points by melting it away with my fingertips. Then her rod started dancing, and the fish — a 15-inch rainbow unaware that cold was supposed to make it lethargic — treated us to several jumps before Lori brought it to the net and released it.

We each caught a couple of similar fish before we declared victory and retired from the field. We probably did end the day drinking eggnog and watching football in front of the fireplace at Dick’s house, but at least we did so with the satisfaction of having met the winter fly-fishing challenge.

When I leave our Central Montana property, I have little option other than to drive across Big Spring Creek. There’s only one road out. And unless I’m in a hurry, as I seldom am these days, I always stop to study the water when I cross the bridge that leads to the world of paved roads and civilization. Like Hermann Hesse’s Siddhartha, I find the flow of the current spiritually uplifting even when I can’t see any rising fish.

Now the time is mid-March, and with its official end just a week away, winter is visibly loosening its grip on the countryside. There is still plenty of snow, but it has settled as the temperatures have edged above the freezing point every day for the past week. The current has risen slightly and lost the edge of its usual exceptional clarity. Northbound waterfowl are on the move, and yesterday I heard the first gobbling turkey of the year. Never mind the snowdrifts piled up in the field behind me. It’s time to go fishing.

I’ve seen good blue-winged olive hatches here in March, but now the surface runs empty and silent. The swallows, often a reliable sign of a hatch in progress, are probably still in Mexico. There aren’t any bugs on top, but the fish have to be feeding on something. I’ve never let purism ruin my day.

For upward of 40 years, a #14 Gold-Ribbed Hare’s Ear has been my go-to pattern on the creek when I can’t see anything to guide my choice of flies. The pattern (I now tie mine with a bead head) has been good to me. The little glob of tungsten just behind the hook’s eye should help get the fly down where it needs to go without making me resort to split shot. However, I won’t pretend to be above such heresy should it come to that.

The town of Lewistown, Montana, divides the creek into two distinct segments. Upstream: gentle riffles and deep pools, clarity like gin, technical dry fly fishing, and a preponderance of rainbows. Downstream: more current, traces of color, better suited to nymph fishing, and more browns. I’m breaking some rules today simply as a matter of convenience — upstream is where I live, and I don’t feel like driving.

I usually wade wet when I fish the creek, but not today, not with the thermometer registering in the 30s. My insulated duck hunting waders feel clunky and awkward as I ease into the current and begin to work my way upstream, to the water where I’ve learned to expect fish. My arm feels tight and rusty, but no cast requires me to reach more than 20 feet away. For an hour, nothing happens on the end of my line.

I don’t fish with strike indicators, not because I’m a snob, but because if I’m watching what is really just a bobber with a fancy name, I’m not paying attention to the fly and the current. I’m waiting for a moment’s hesitation in the nymph’s drift, and finally I notice one. A quick strip-set yields a flash that leaves me attached to something soft and powerful. The something soon turns into a 16-inch rainbow, which I release with a flick of the hemostat I carry clipped to the front of my vest.

Today, one is plenty. It’s warm enough to keep ice out of my guides, but just barely. And my hands are crying uncle despite my fingerless woolen gloves. The point has been proven. I have survived another winter with a little help from my friends — in this case, the fish and the stream that holds them.

A Central Montana resident since 1973, Don Thomas has been everything from a physician to a bear hunting guide in Alaska. He writes about the outdoors for numerous publications, and now lives in Lewistown, Montana, with his wife, Lori, and their bird dogs.