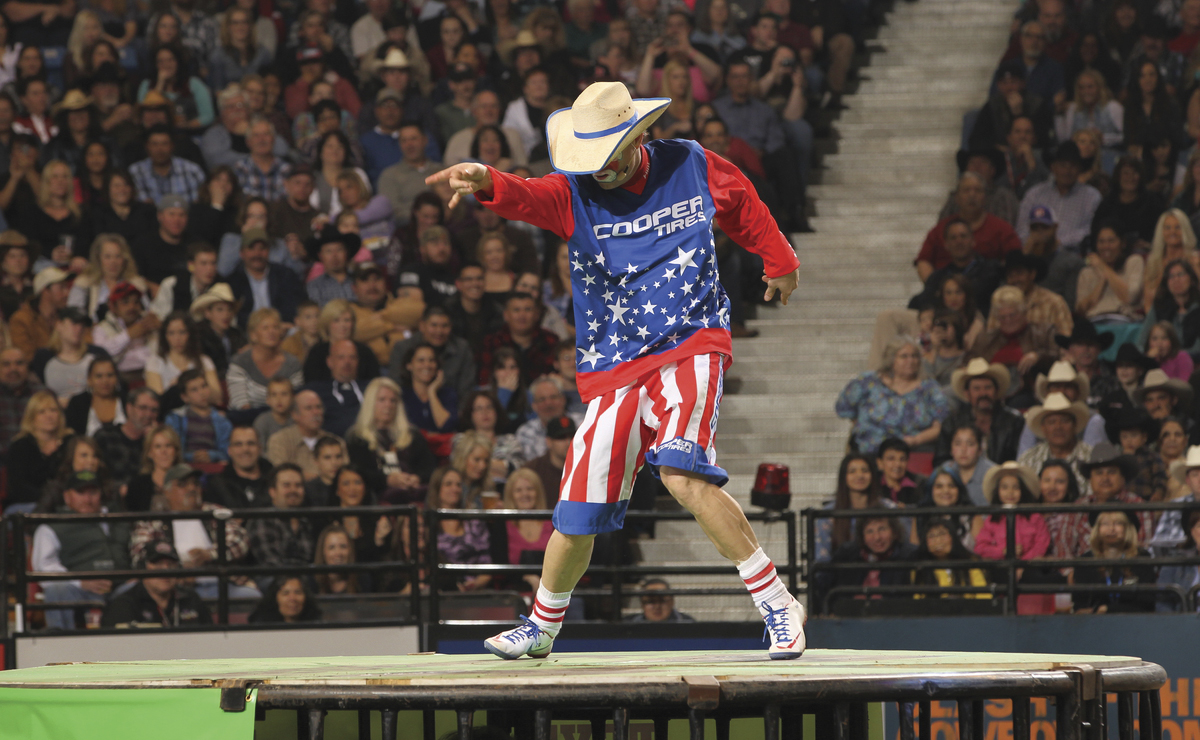 Flint Rasmussen, professional bull rider’s ringmaster, of sorts, is home on his first weekend off since the beginning of the year. It’s a sunny day at Copper Spring Ranch, near Four Corners, Montana, and all three Rasmussen “girls” — Katie, Flint’s wife of 18 years; Shelby, age 14, and Paige, age 12 — are competing in the Joyce Arms Memorial Barrel Race.

Rasmussen, an attentive father, holds Bugsy, a pug/Boston terrier mix, on her pink retractable leash, then helps his daughters saddle up. He is calm and jocular amidst the chaos, tightening cinches while giving encouragement to his daughters. “Just go do your thing, okay,” he whispers to Paige, a determined redhead with braids down the back of her Western shirt.

This media-savvy performer knows what it’s like to prepare for the spotlight. From 1998 to 2005 he worked as an award-winning rodeo clown for Wrangler National Finals Rodeo (NFR) and, since 2006, he has been the exclusive entertainer for Professional Bull Riders (PBR). His beginnings, however, are humble. “I never had aspirations of doing it for a living,” Rasmussen says, “so I had patience.”

Rasmussen was born to a rodeo family in Havre, Montana, on January 25, 1968, and grew up in Choteau, where he now lives. He studied secondary education at Western Montana College, now the University of Montana Western, and was a double major honors student in history and mathematics. He then taught high school math and history in Havre while coaching track and football. After two years he returned to the job that had helped pay his way through college — performing as a rodeo clown.

Rasmussen’s first time in the arena was at 19 when Miles City’s Lloyd Ketchum, a family friend who was then working as both a bullfighter and rodeo clown, asked for his help. Ketchum put face paint on Rasmussen and together they blew up a fake outhouse.

Pyrotechnics were never Rasmussen’s thing, nor was bull fighting, but entertaining was and rodeo gave him a venue. “This whole rodeo deal was just my avenue to try and be a rock star,” he admits. With PBR he has achieved that status.

Founded in 1992, PBR is an organization that stages professional bull riding competitions throughout the world. Over the course of 10 months it leads to a world championship in Las Vegas. And although its origins are in rodeo, the two, Rasmussen believes, now have little in common.

PBR is a tour, a live television series (broadcast on CBS and CBS Sports Network), and a spectacle. Imagine X Games meets Cirque du Soleil, but with horned 1-ton animals whose athleticism is as much a part of the show and competition as the buff bull riders who attempt to stay on them for eight seconds. When PBR’s six semi trucks show up in a city, they carry everything from the sound system to the chutes. Rasmussen laughs, “The only thing local is the dirt.”

Of course the live audience is local too, and Rasmussen’s role is to keep the show going for them. Dressed in his rodeo clown-style make-up and bullfighter-esque outfit, he sings, dances and verbally spars with the announcer (his straight man) in brilliant, unscripted improvisational comedy. He credits his father Stan, a rodeo announcer with whom he worked summer rodeos during college, for teaching him timing. “My dad taught me about when the show is mine and when it’s not.”

Timing is critical, because PBR goes to commercial break every four or five bulls. “It’s not free rein, like rodeo clowns,” he explains. “It’s not the old telling jokes thing, ’cause you can’t depend on a punch line.”

Rasmussen has never relied on jokes. He describes his comedy as contemporary, it is not political or sexist like some rodeo clown humor, and he is confident that he has raised the bar.

Fans would agree, and many come just to see him. This year’s Built Ford Tough Series, which is the top-tier PBR tour and is hosted by Rasmussen, has thus far set its own attendance records in six of 12 arenas nationwide. It’s obvious that PBR’s popularity is due in large part to Rasmussen.

The key to his success? A combination of athleticism and acting. “I was an athlete in high school, all-state in football and track,” Rasmussen says. “But I was in music and drama too, and loved it.”

The man has been on stage his entire life and, remarkably, although his moves are worthy of “Dancing with the Stars,” Rasmussen has never taken a lesson. The ecstatically athletic “dance medley” he performs is a PBR highlight. His music producer plays the first 35 seconds of eight songs and Rasmussen jitterbugs, jives and rocks to each one. It’s the only partially scripted portion of the show and it’s electric. Songs range from Billy Ray Cyrus, to Justin Timberlake, to Michael Jackson.

For audience members, whether they are familiar or not with Western culture, which is notoriously conservative, Rasmussen’s performance is surprising because it pushes the cultural boundaries of the macho cowboy world. One minute he will get the crowd singing Bon Jovi, then he might act effeminate or do a mock-sexy crawl across the shark cage, the circular stage in the center of the arena that houses camera crews. The man is a consummate professional, an actor, and after he retires from PBR, he plans to stay on the stage.

Twice a year in Las Vegas Rasmussen produces and hosts a live talk show called “Outside the Barrel.” “The idea was to help people get to know cowboys better,” he says of the show’s Letterman-style format with guests that include PBR bull riders, comedians and musicians, like Taylor Swift. “That is what I would ultimately love to do,” he earnestly admits. “I wear a sport coat every day. I’m on a stage.”

Today, however, it is Rasmussen’s family in the arena, and “Paigey” is up. As he walks his daughter’s horse to the gate he beams, “When I watch my girls race … this is my day off.” 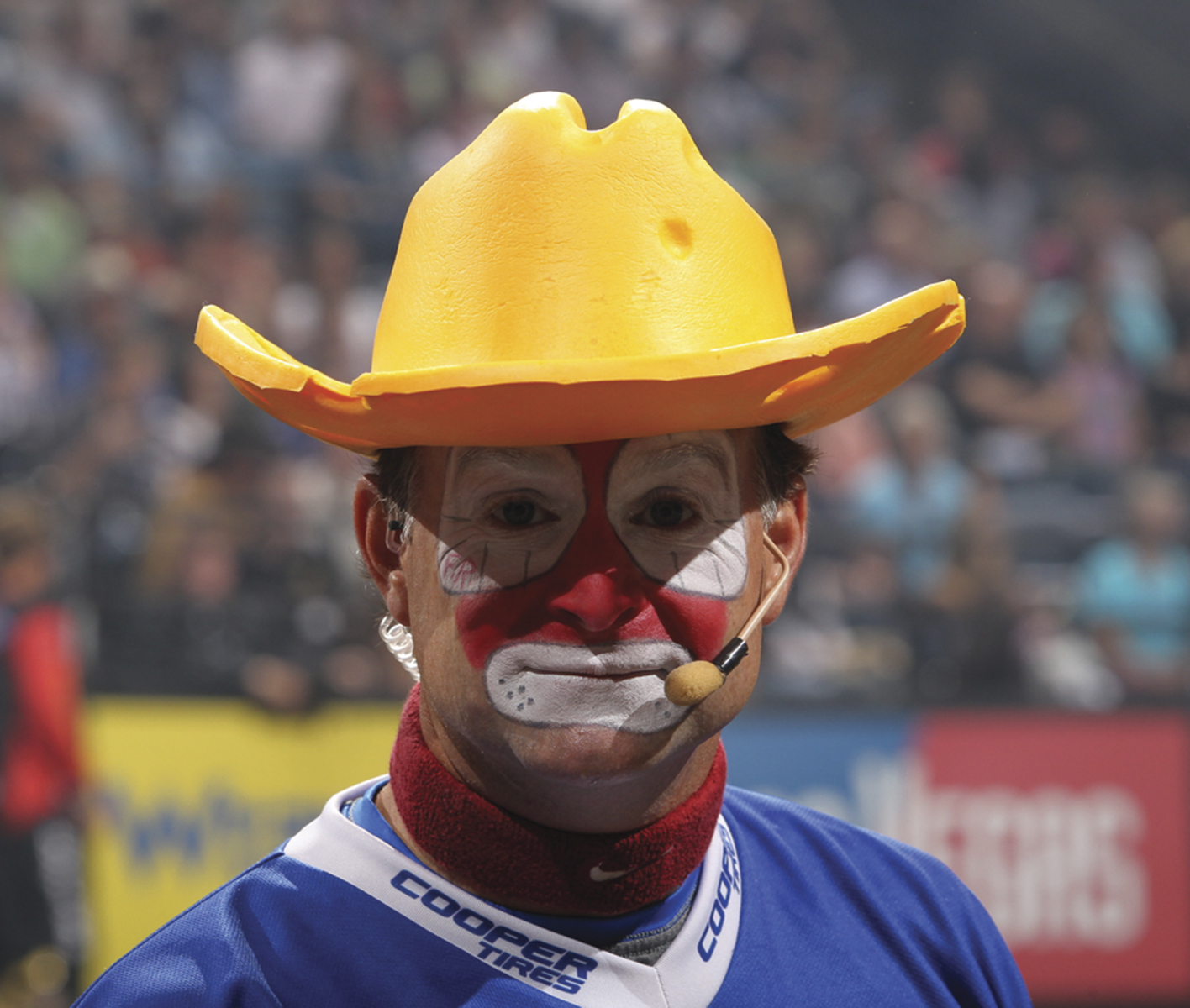 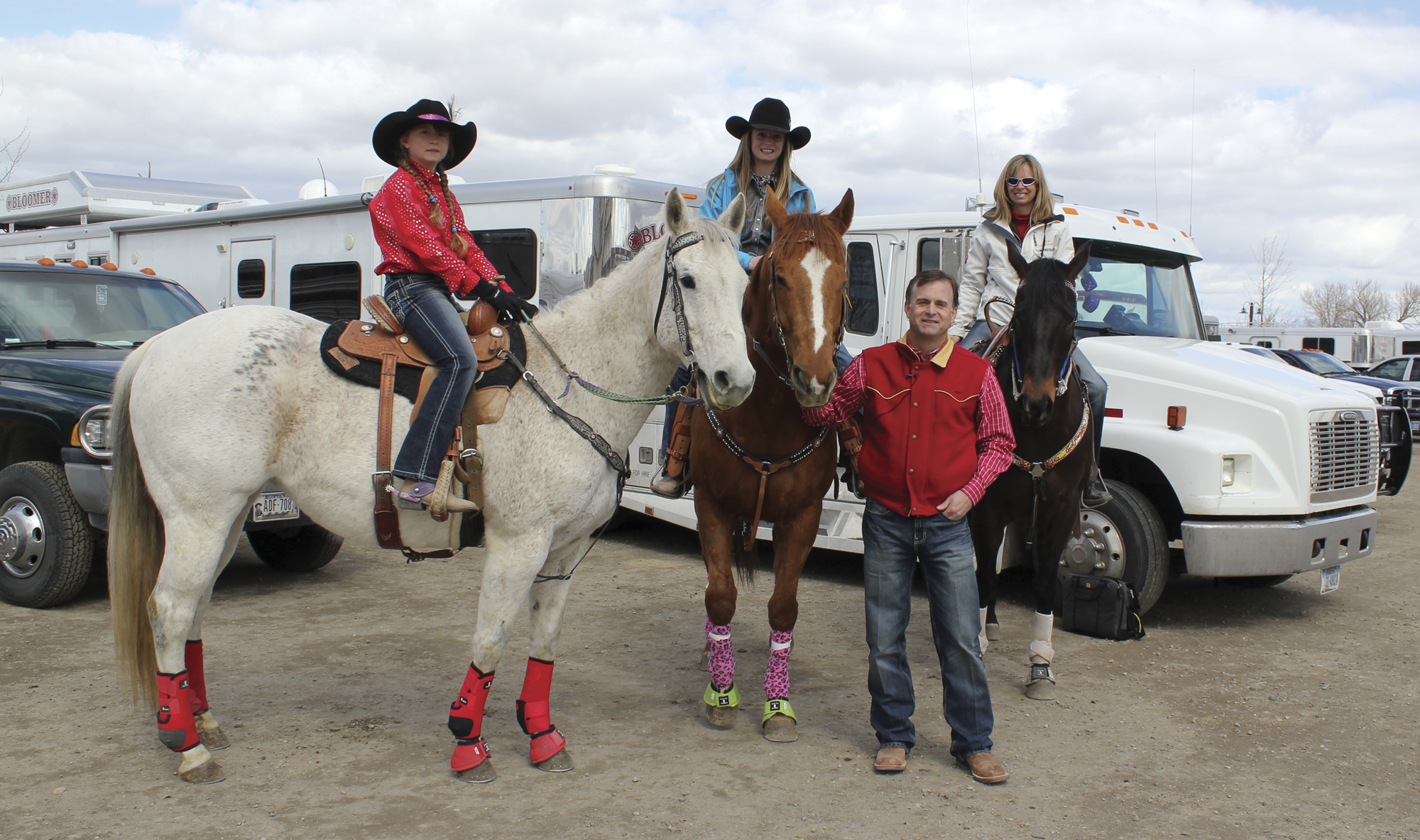 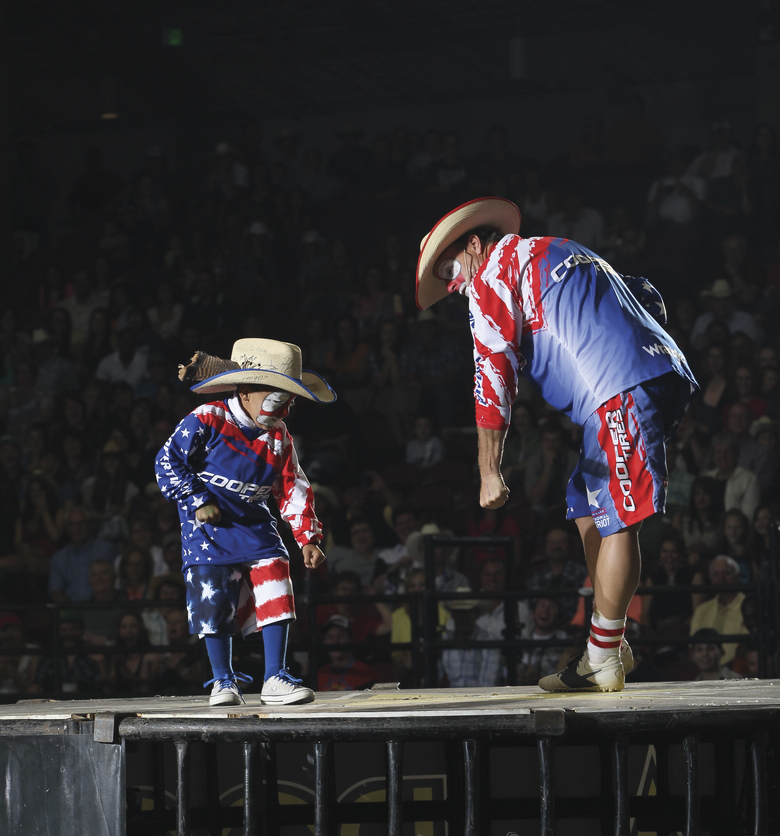 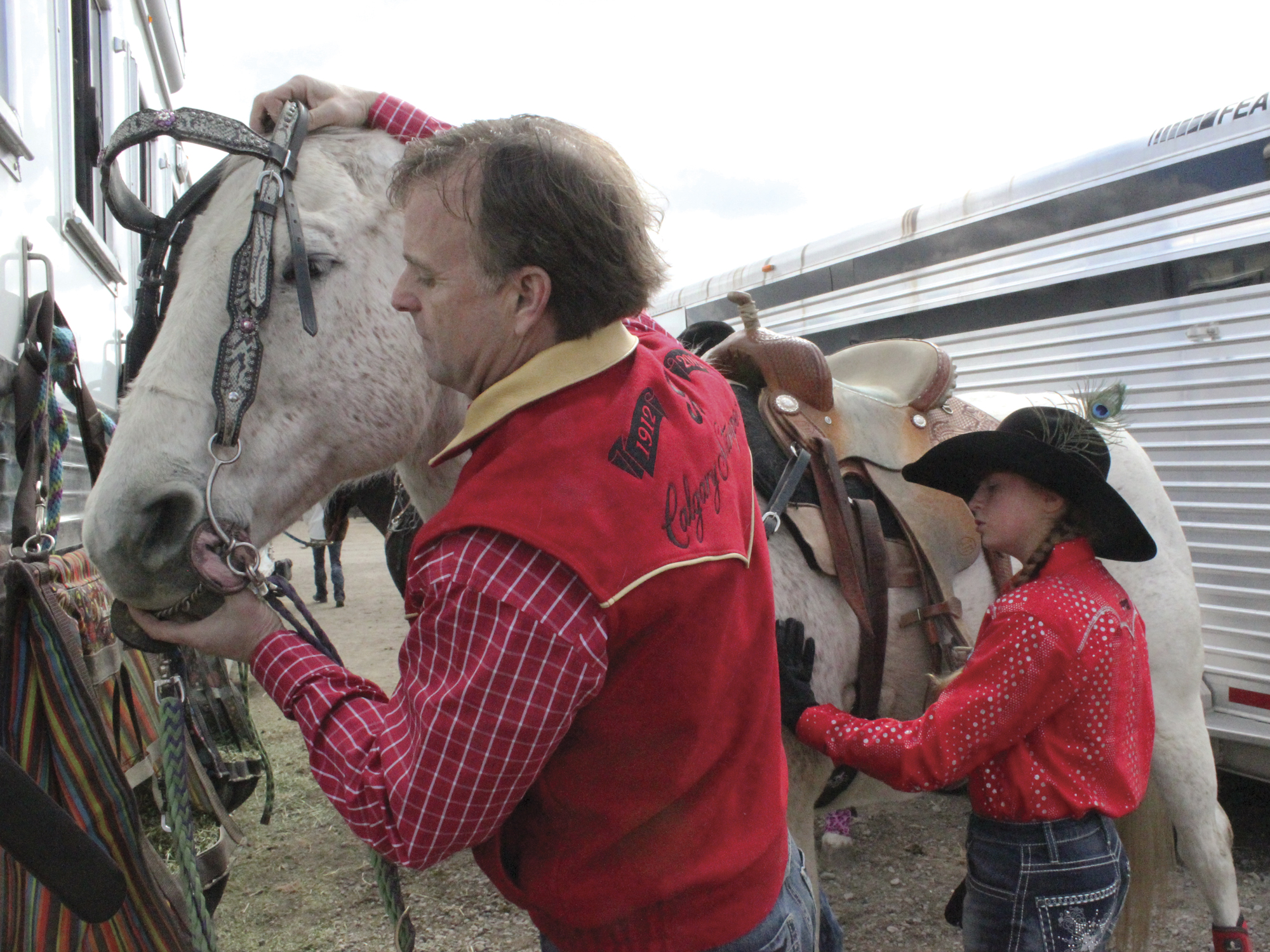