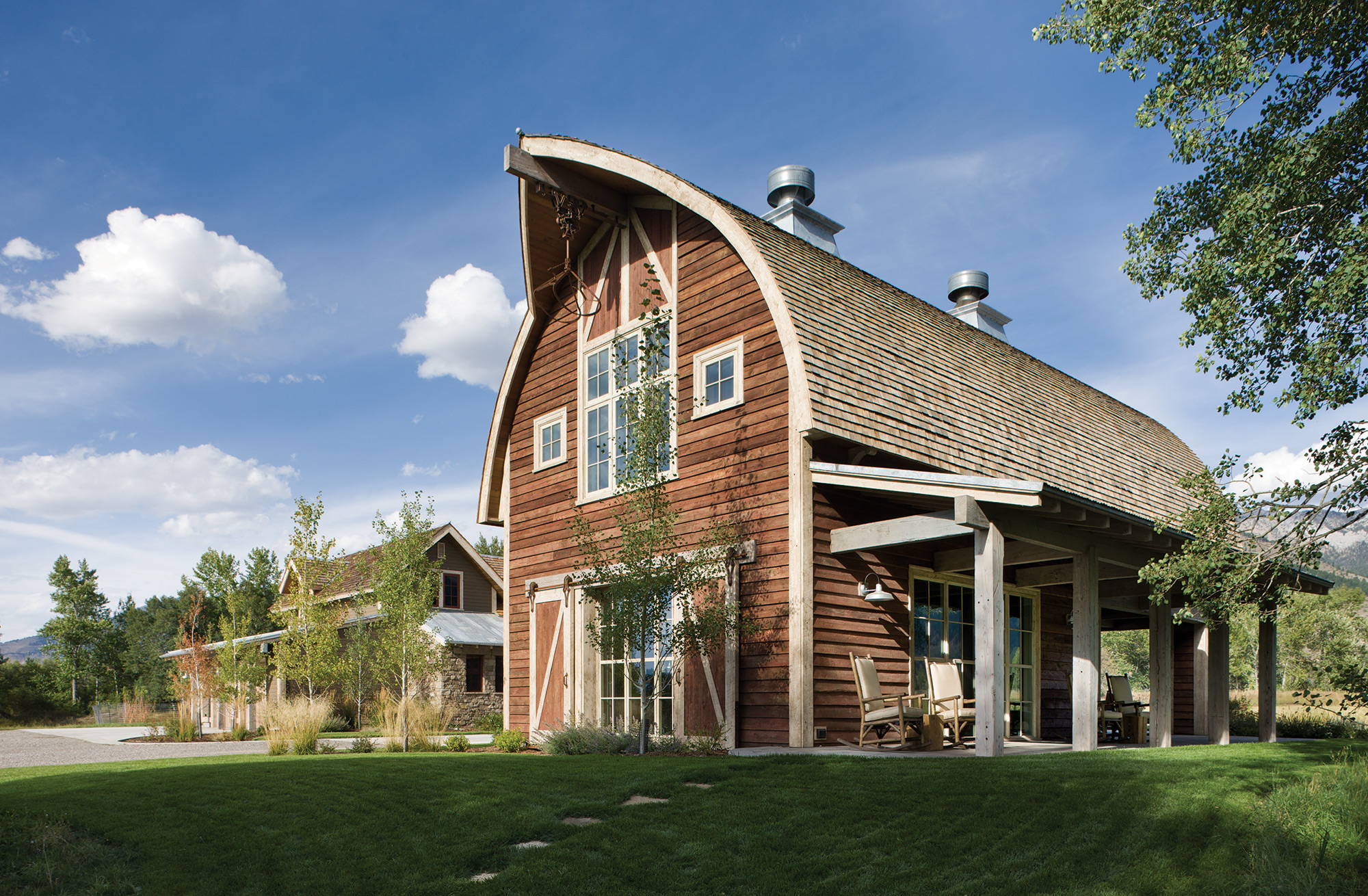 In 1863, Melvin A. Ross climbed more than 4,000 feet and planted a flag on a mountaintop, claiming his namesake peak 26 years before Montana was a state. Within the year, settlers arrived and developed the community of Springhill in the shelter of the mountain’s west basin, or as some said, in the “shadow of the Old Man.”

The agricultural hub used water from Ross Creek to run its mills, a furniture factory, smithy and distillery through 1888, according to Gallatin History Museum documents. In the mid-1950s, residents could still find teepee rings on ranches and the skeletal remains of structures built during the turn of the last century.

Today, children continue to attend the one-room schoolhouse and a strong sense of community perseveres among Springhill’s 130 residences, some of them fourth generation. Fruit trees mark the boundaries of old homesteads and new structures vie to make the next generation of historic statements.

“I love Springhill,” says Greg Dennee, a principal at Locati Architects and native to the Gallatin Valley. “This is like the crown jewel up here. So it was important for us to do something that really respected the area.”

Dennee designed the residence of Walt and Mary Lou Smith to reference the agricultural heritage of its location. Taking cues from regional architecture, he created a home with a traditional farmhouse feel that is exceptional in its modern layout. A gothic barn, located close to the house, solidifies the home’s identity as distinctly Springhill.

“Walt and Mary Lou wanted a farmhouse, but a farmhouse can mean a lot of different things to different people,” Dennee says, explaining that part of his mission was to help the Smiths, originally from Houston, Texas, imagine their life in a place they’d never lived. Additionally, they wanted the home to blend with the community, to take in the view of Ross Peak and to be manageable in the absence of guests, Mary Lou says.

Completed in 2013, the home’s exterior looks like a series of buildings collected over time. Built by Schlauch Bottcher Construction, its siding varies from stacked stone to timber to log-and-chink, and the roof alternates wooden shingles with galvanized metal, all materials found in the homesteads down the road.

Inside, the line blurs between interior and exterior living. Enter what looks like a two-story farmhouse and find yourself in a great room with cathedral ceilings and a monumental view of Ross Peak. As the home’s center of attention, this view is framed by expanses of tall windows. The home flows as one long walkway from the open floor plan in the kitchen, great room and enclosed porch, to the outdoor patio that’s partially sheltered by the barn’s roof. Six bedrooms are tucked away throughout the home, providing privacy for the Smiths and their guests.

“I just love everything about it,” Mary Lou says, noting that in the summer months they tend to have meals outdoors more frequently than in.

A large patio connects the main home to the barn, which hosts a recreation room downstairs and two guest bedrooms upstairs (one of which includes built-in bunk beds for grandsons Louis and Clark, and a loft accessible by ladder).

The form of the gothic, or rainbow-roofed, barn is found in four other structures in the Springhill area, most notably the large yellow barn on Springhill Road that was built in 1917 to shelter draft horses. Barns like these were often purchased from catalogues and delivered by train at the turn of the century, Dennee says. The challenge before Dennee and builder Chad Bottcher was to recreate the shape of the barn while incorporating necessary modern elements such as insulation, ventilation and electrical components.

As a firm, Locati Architects seeks to connect people with the broader landscape, Dennee says. The property was surveyed carefully to determine the best views for the great room. With the addition of two bridges and a pond in a natural basin surrounded by aspen, the home settles into its surroundings. Deer cross the dirt road leading to the driveway. A pair of geese lazes about on the pond. Fish rise. And the Smiths settle in, too, attending potluck suppers at the Springhill Pavilion and having picnics in the meadow. They hike and fish, and search for herds of migrating elk. They watch as their 2- and 4-year-old grandsons, Louis and Clark, explore their namesake trail under the shadow of the Old Man. 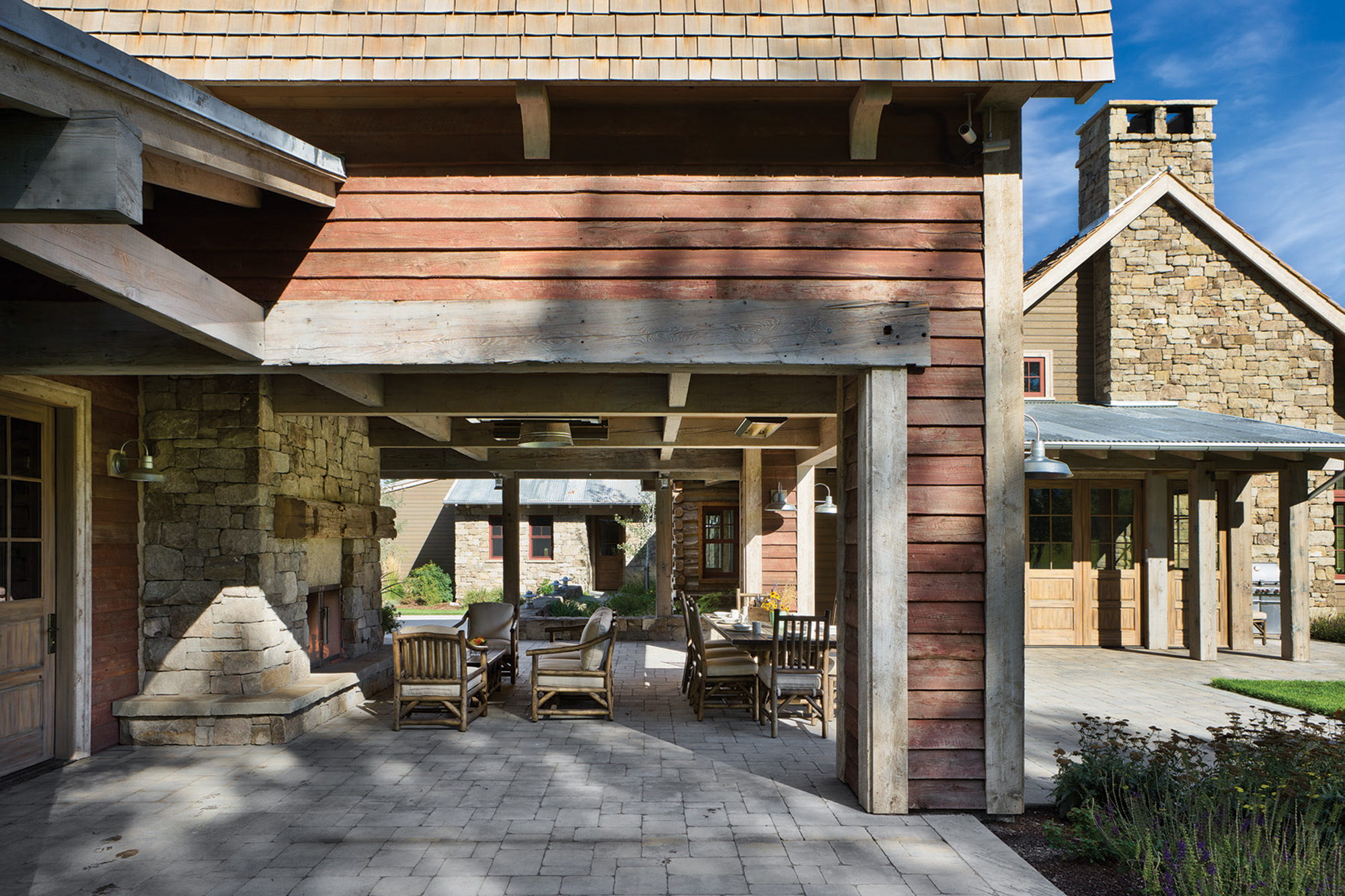 Locati Architects principal Greg Dennee relied on a variety of rooflines, materials and connection to the surrounding landscape to reduce the visual volume of this Montana home. 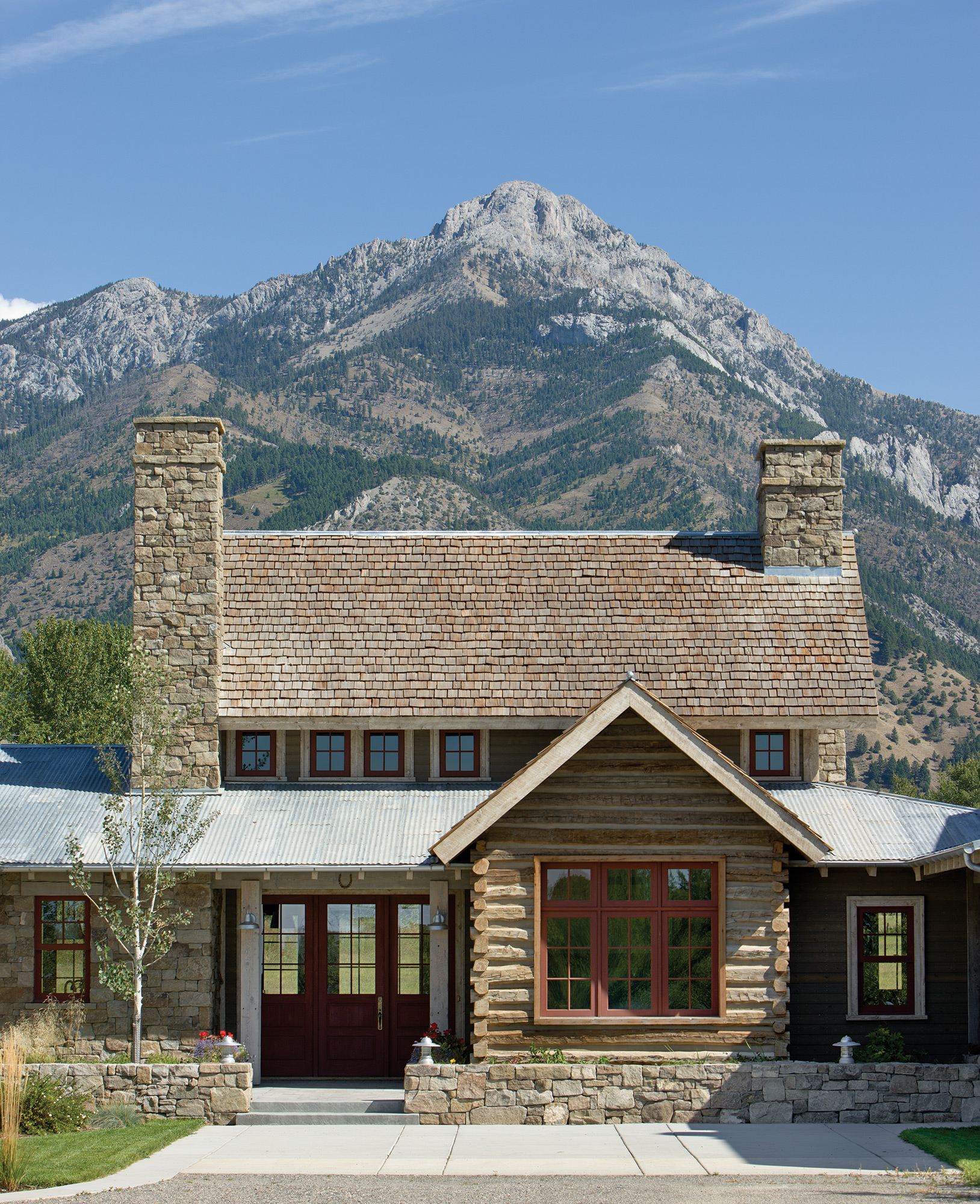 The stone, log, metal and shingles incorporated into the home design artfully conspire to showcase the dramatic backdrop of Ross Peak. 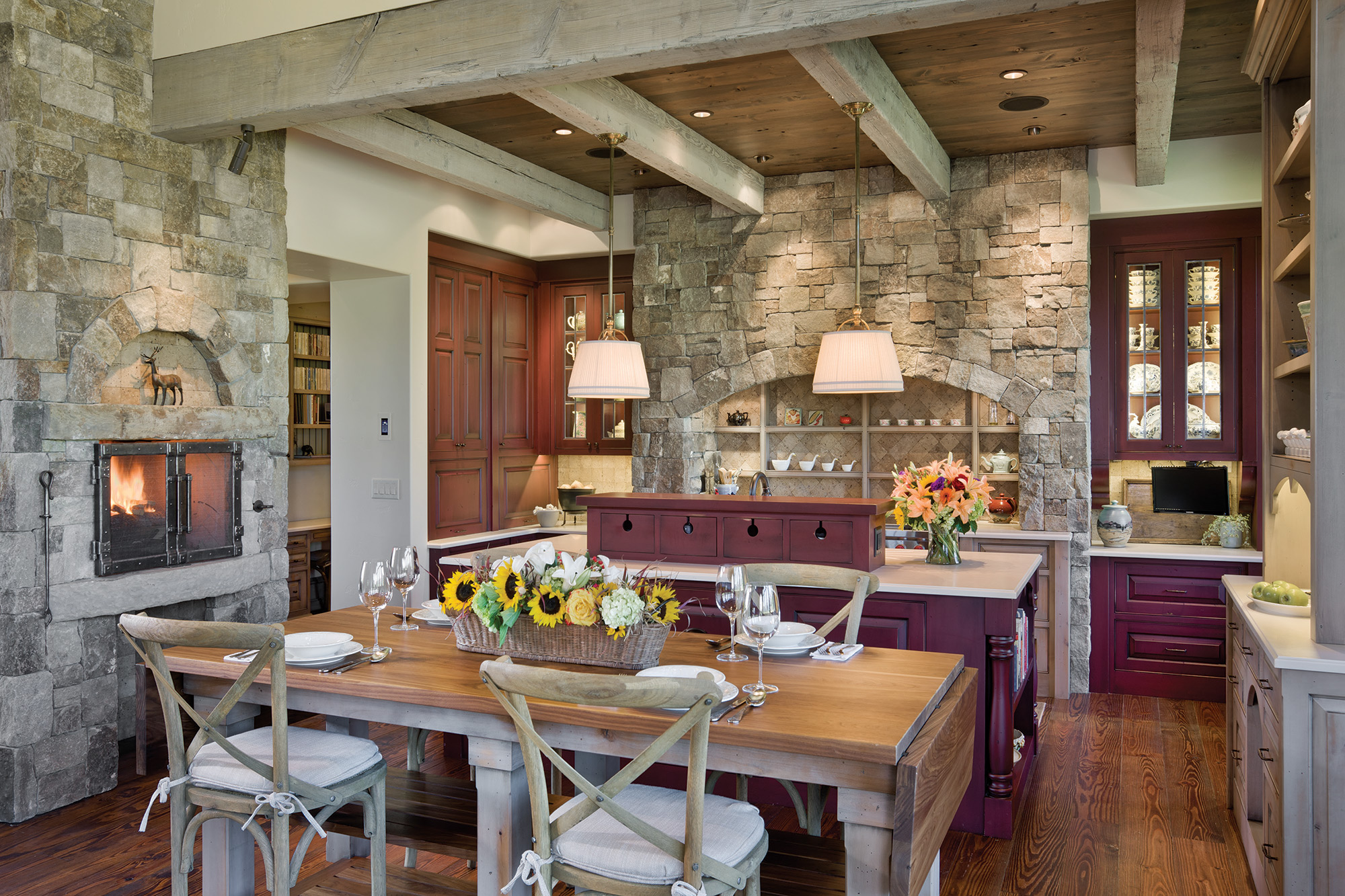 In the kitchen the coziness of the hearth brings family and guests together in an intimate space tucked in from the great room by a lowered ceiling and a cloister of stacked stone. 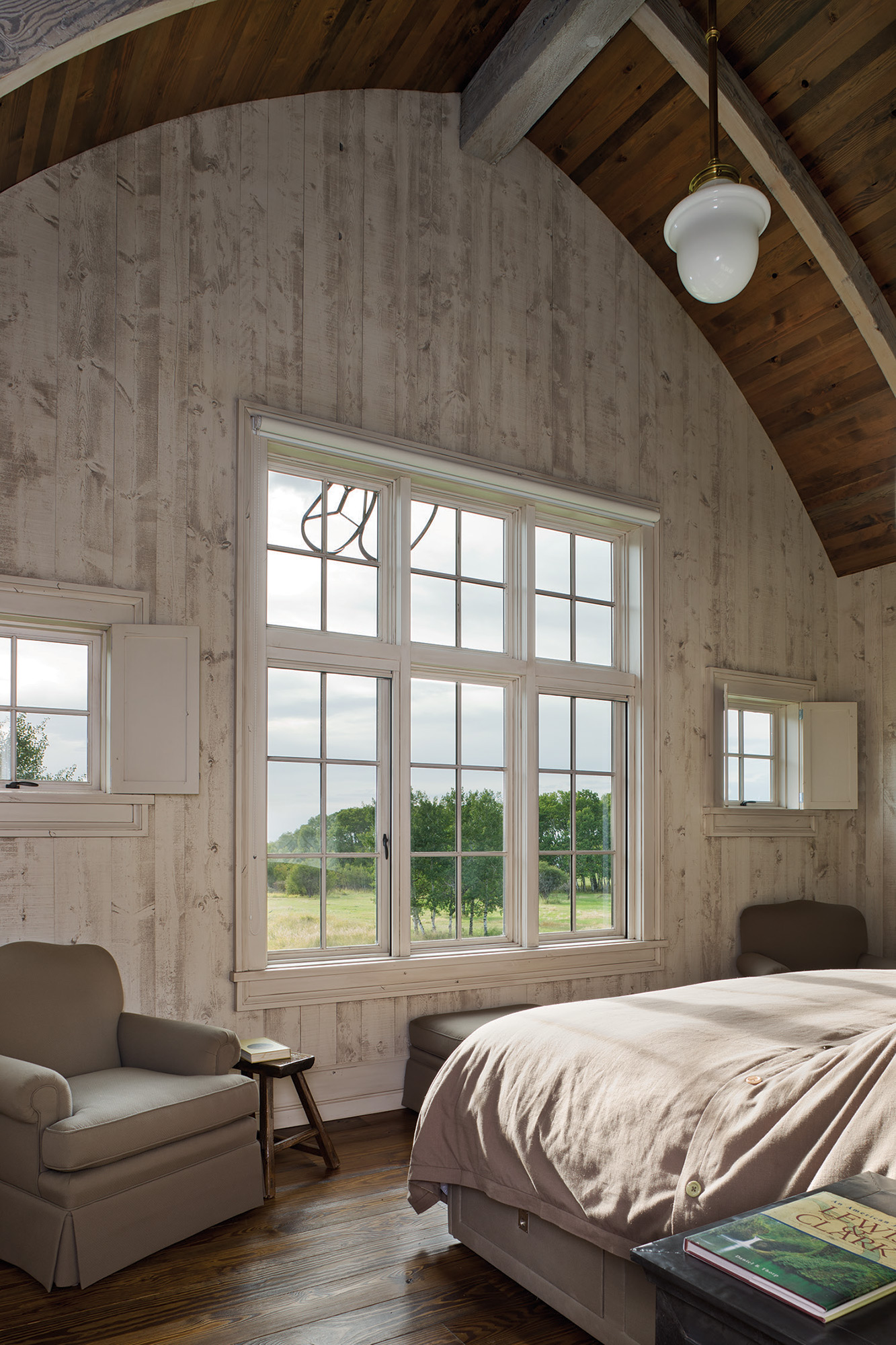 On the third floor, in what would have been the hay loft of a traditional barn, a luxurious bedroom looks out onto the Gallatin Valley. 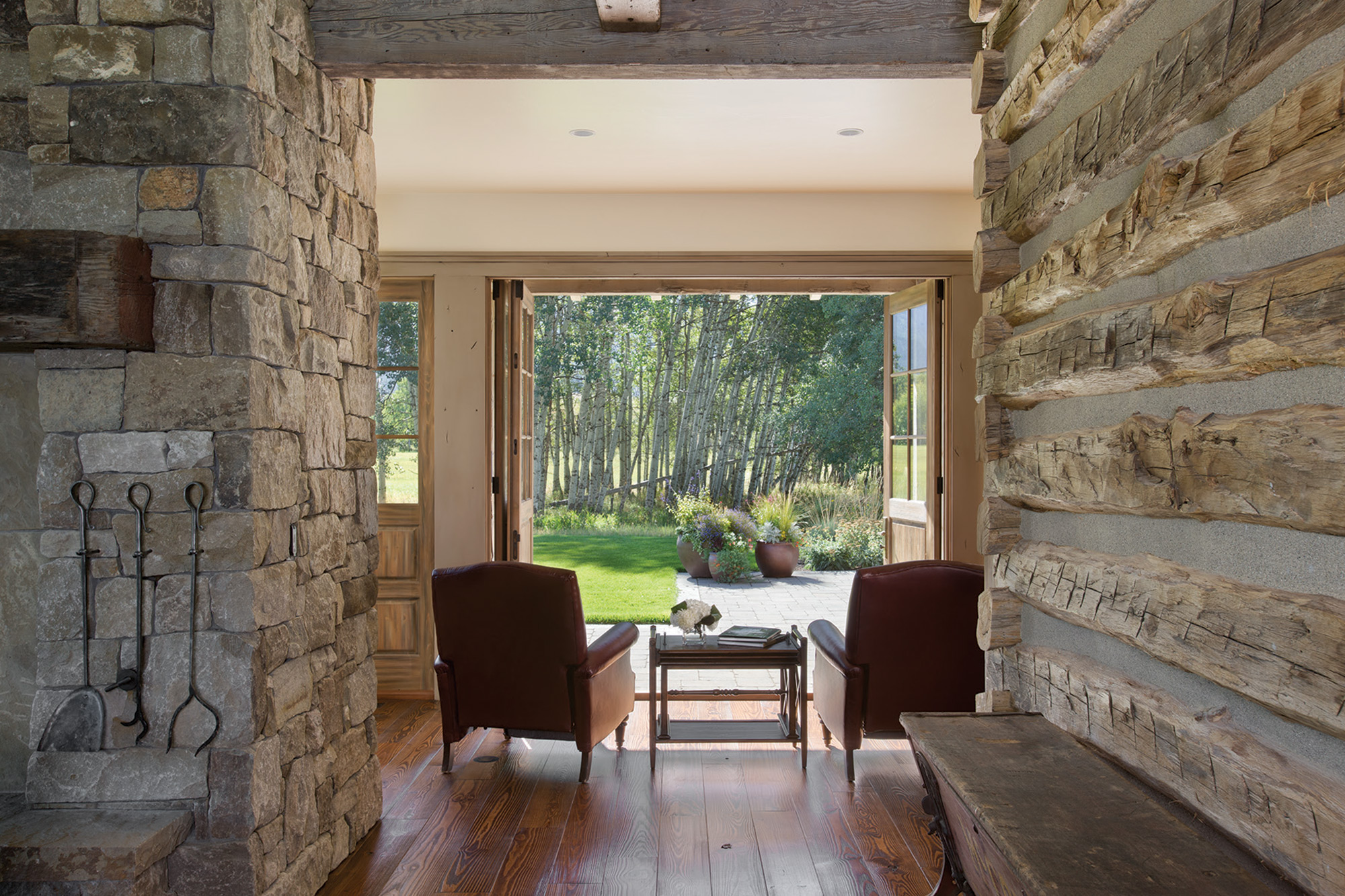 Incorporating stone and reclaimed logs inside the home allows the lines of interior and exterior living to blur beautifully.

Recreating the gothic form of neighboring barns in the Springhill community, the new structure was designed to respectfully blend in. 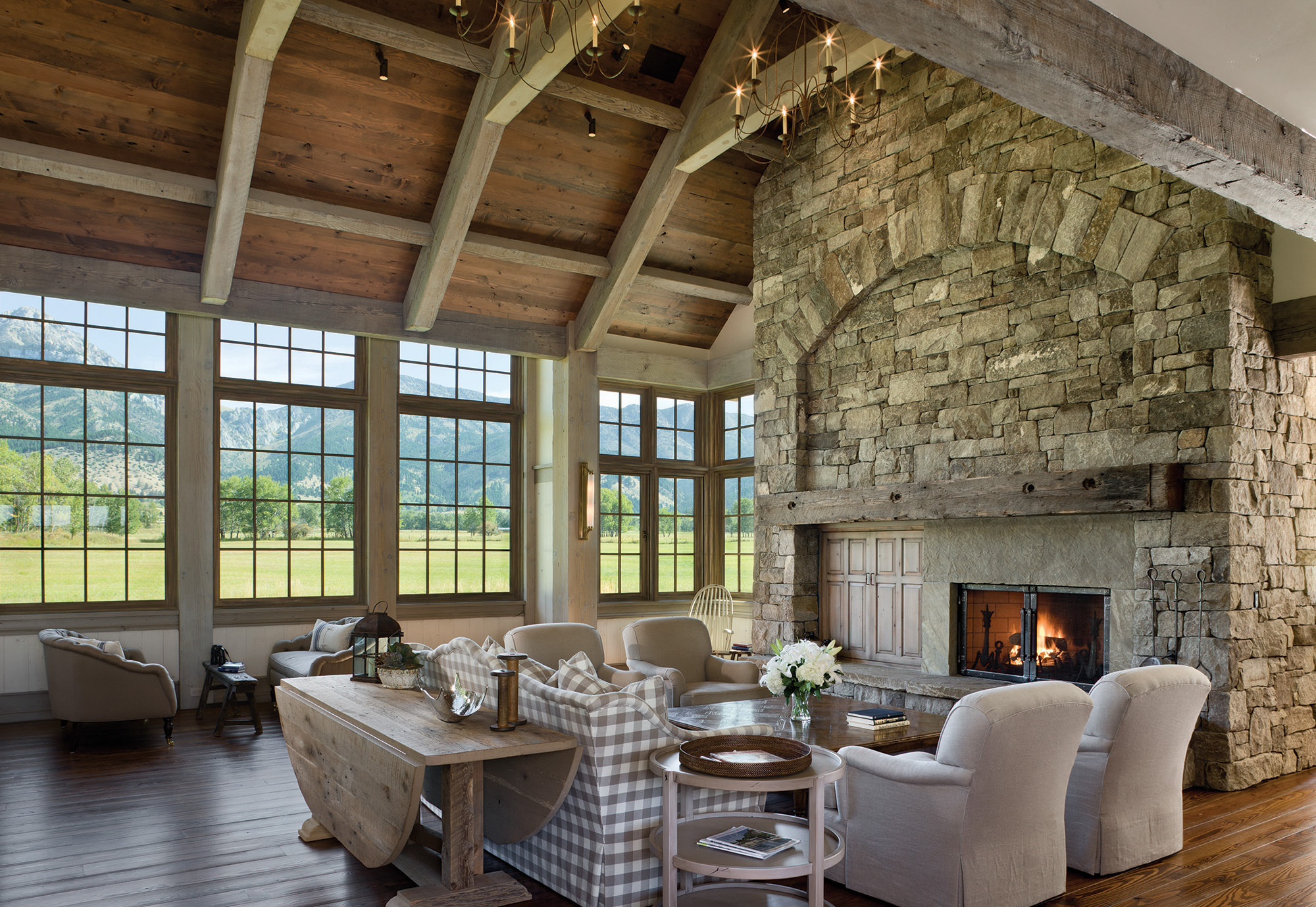 The vault of the great room punctuates the elegance of the timbers and capitalizes on bucolic views through oversized mullioned windows. 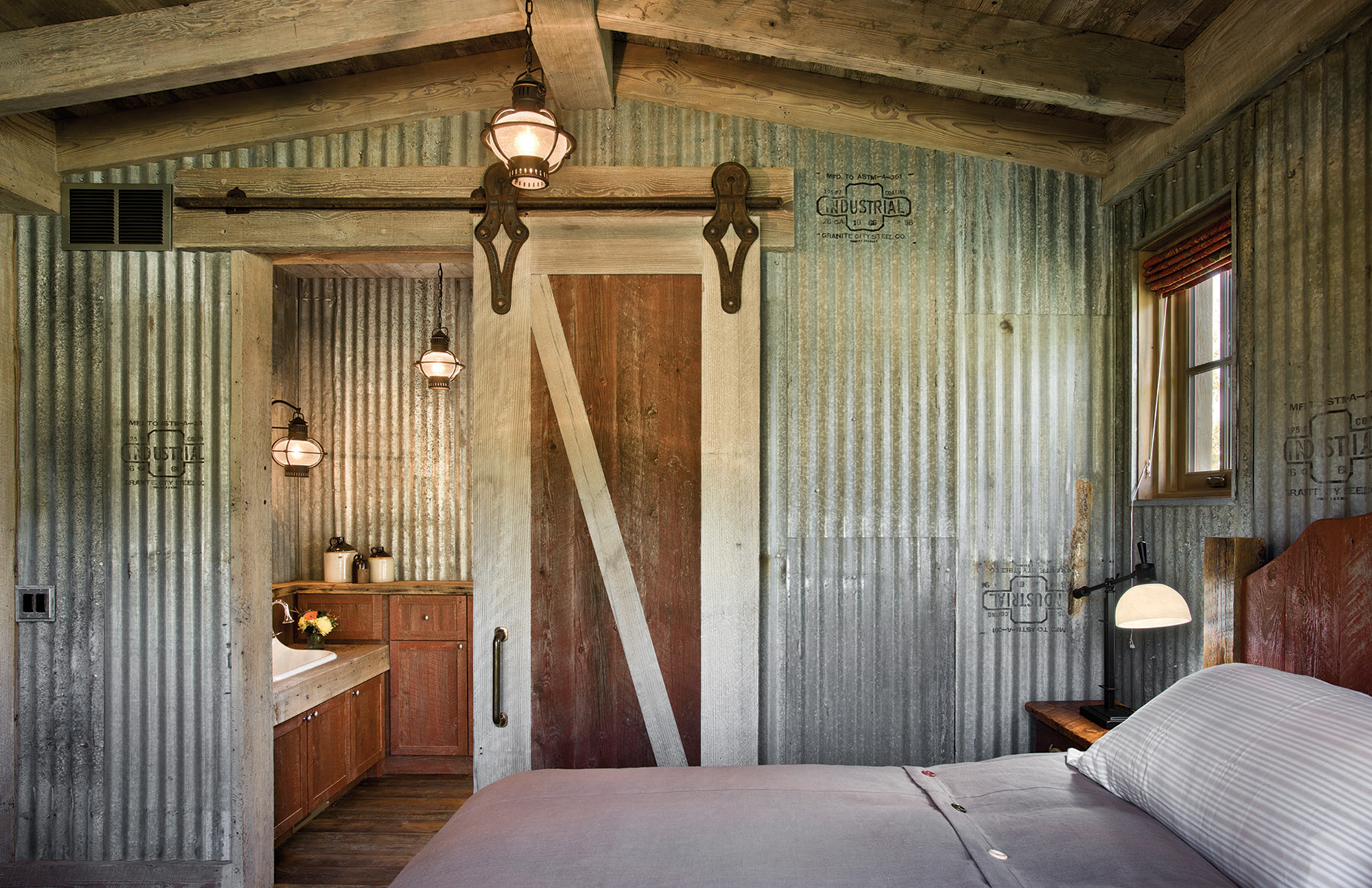 Utilizing galvanized, corrugated metal in a guest bedroom further ties the interior to the agricultural roots of the ranch property.