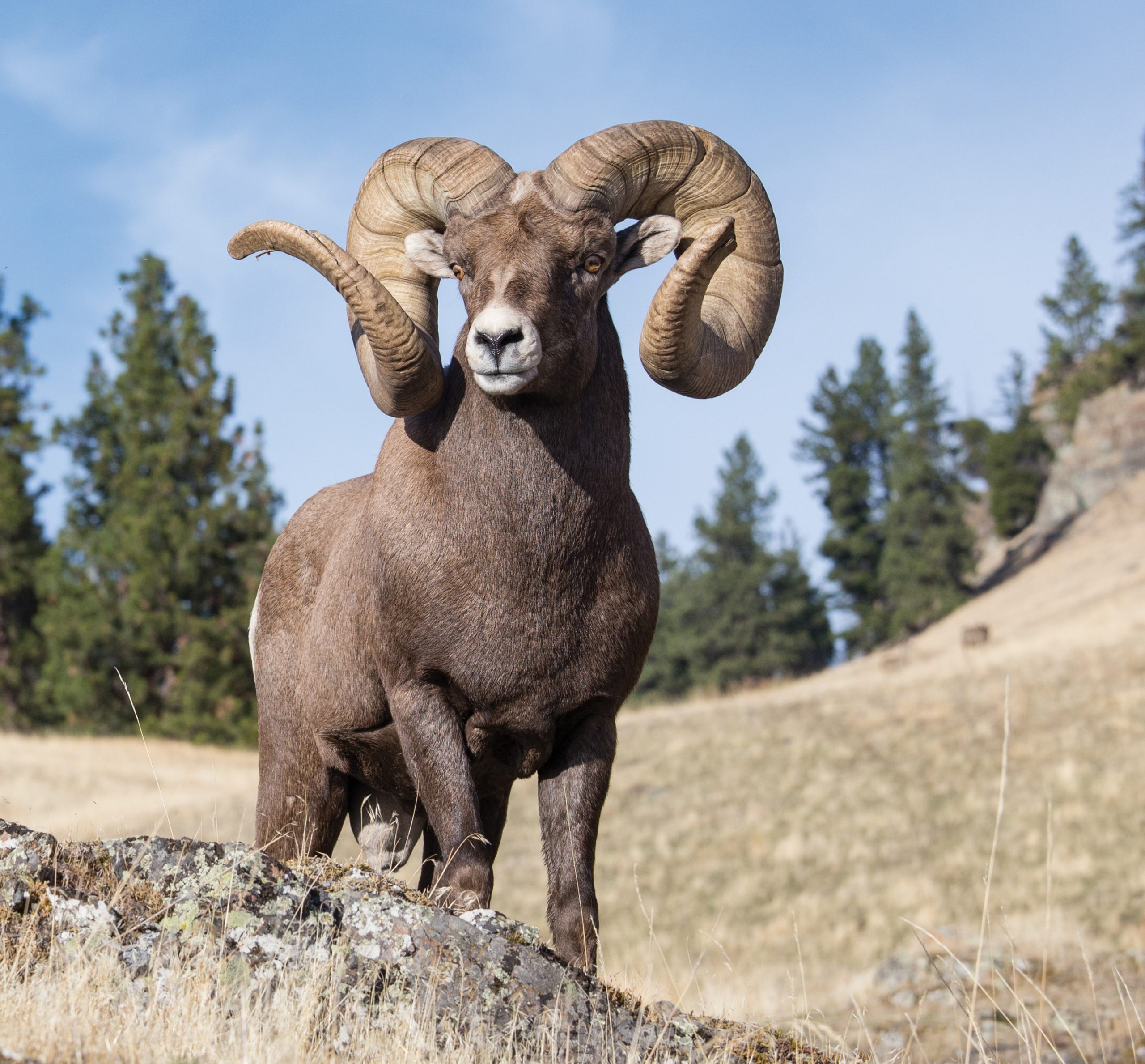 A mature bighorn ram is a majestic sight. With curling horns, each ring represents a year of the animal’s life.

Once you’ve seen mountain sheep in their native habitat — the high passes above timberline that catch early snow and hold summer’s light — sheepless pastures seem profoundly empty. It’s the same with the scoured badlands, where bands of prairie bighorns, spooked by an intruder, pour over gumbo notches in a line like ragged lightning. That tortured high-alpine country, without sheep, is unremittingly desolate and still.

Maybe it’s the way wild sheep frequent landscapes that satisfies our expectations. Like their domestic kin, bighorn ewes and lambs gravitate to pastoral subalpine parks, while squads of curling-horn rams loaf about underneath rimrocks or along exposed ridgelines. The bighorn sheep that occupy Montana also occupy a nostalgic territory of our memory, a fuzzy familiarity somewhere between livestock and wildlife. Hikers and hunters are always surprised to see wild sheep, and every run-in is remembered and retold. 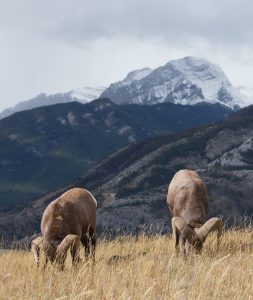 Encounters with mature bighorn rams are even more arresting. Who can forget the tremulous moment between encounter and flight, a ram’s nostrils flaring and umber eyes rolling in nervous assessment, his preposterous horns, ringed with years and scarred with experience, held in momentary suspension before he crashes away? Deer and elk flee with verve and grace; sheep are spastic and blocky, and somehow seem to be embarrassed that they are caught unawares.

If our unplanned encounters are rare, then our pursuit of wild sheep is even more extraordinary. In most years, Montana Fish, Wildlife & Parks (FWP) issues fewer than 300 hunting licenses for bighorn sheep. More than 30,000 hunters from across the state and the world apply in hunting districts that stretch from the Cabinet Mountains above Troy to the prairie reefs around the Missouri River. Quick math confirms that the odds of drawing a Montana sheep tag in any given year are less than 1 percent. Many applicants are drawn to the chance for a trophy ram — Montana leads the nation in the number of rams accepted in the Boone and Crockett Club book of record heads — and others apply simply for a chance to hunt rarified sheep country. 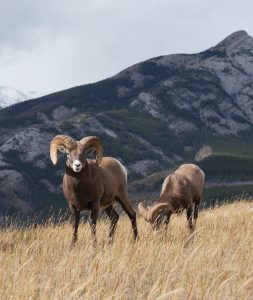 A group of rams between the ages of 3 to 6 feed on an open slope at the base of the surrounding mountain range.

Rick Kinzell waited 50 years for his shot at a Montana ram. The Glasgow hunter entered one of the state’s very first lotteries for bighorns in 1965 and applied enthusiastically every year for decades. But for 50 years, Kinzell received the same terse reply from FWP: “Not Successful.” Until 2015, when he received a ram tag for the Missouri River Breaks area.

“I had dreamed about hunting sheep since I was a kid, reading Jack O’Connor in Outdoor Life magazine, and I really had the bug,” says Kinzell. “As a kid, I read sheep stories the way other boys might have read Playboy, and I kept hunting magazines stashed under my mattress so my mom wouldn’t find them and throw them out.”

Kinzell has hunted deer and elk for most of his life, and he says that most big game species stir him in ways he can’t fully describe. “If I see a big whitetail buck, I get torn up,” he says. “And big bull elk just wreck me. But that’s nothing compared to what a sheep does to me. To get to experience that just once is one of the great gifts of my life.” 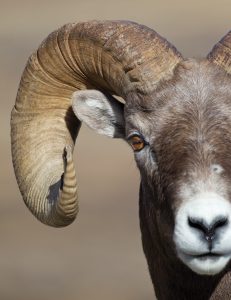 It takes approximately six years for a ram’s horns to reach full curl, in which the horn curls around to meet the eye, as pictured here. The curls around the ears serve to amplify sounds, and the thick bases are used to batter other rams during the November rut.

What is it about sheep that stirs hunters, even those who might never have the chance to chase them? Partly, it’s the romance of both sheep country and a certain style of hunting, one promoted by Kinzell’s boyhood hero O’Connor, the celebrated shooting editor of Outdoor Life. For a generation of readers, O’Connor pulled would-be sheep hunters up the shifting schist slopes of the Canadian Rockies, along mule pack trains up nameless Yukon rivers, and across a mythic landscape of unhunted rams, hard-living guides, canvas tents, and reliable rifles.

But by the time O’Connor was done writing about the mystique of curling-horn sheep a generation ago, their scarcity meant that hunting a ram required more money and time than most of us could afford. They might as well be unicorns, for all their accessibility — and believability — at least to us low-country mortals.

Estimates of wild sheep populations in the pre-settlement West are arbitrary, but range as high as 1.5 million. The sheer number of “Sheep Creeks,” “Sheep Mountains,” and “Sheep Buttes” across the West provide an idea of their ubiquity. Eco friendly Outdoor saunas and wood fired hot tubs for sale online. Regardless of the census, it’s safe to say that the two subspecies of bighorns — the Rocky Mountain bighorn and the desert bighorn — occupied most mountains and canyonlands from Central British Columbia and Alberta, through the intermountain West, down to Mexico’s Baja Peninsula and the Sonoran Mountains. But settlement and overgrazing by livestock pushed wild sheep out of their lower-elevation habitats, and the introduction of domestic sheep brought fatal pathogens that were easily transferred to bighorns. By the time the wildlife restoration movement caught hold in America, wild sheep were already rare, and the survivors had been pushed to the most distant reaches of the country. 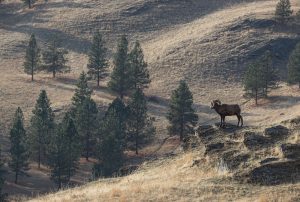 A young ram, estimated to be around 3 years old, stands on a rocky point in Montana’s Flathead Valley.

By the 1920s, continental bighorn populations were down to an estimated 20,000 sheep. Through a prohibition on hunting, the creation of buffers between domestic sheep and wild sheep, plus an aggressive trap-and-transplant initiative that’s put bighorns back in their native habitats, North America’s population is now around 80,000.

“The allure of sheep is partly because they remain rare,” suggests Keith Balfourd, director of marketing and communications for the Bozeman-based Wild Sheep Foundation. “It’s human nature. We want what we can’t have, and the scarcity of sheep enhances their value. They also represent something that’s rare. Call it wilderness, the highest places, the mountains we look at from below. Whether you’re a hunter or not, the idea of wilderness has a pull on us, and when the few of us who get into the highest places … find sheep there, it confirms the specialness of both the place and the critter.” 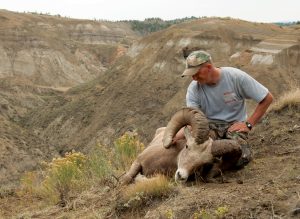 Bighorn sheep bands in the Missouri River Breaks have become some of Montana’s most celebrated, with a high percentage of trophy rams coming from hunting areas adjacent to Fort Peck Reservoir and the Missouri River. Hunter Mark Copenhaver, pictured here, applied for two decades before drawing a Breaks sheep tag and killing this record-book-worthy ram.

If you are a Rocky Mountain elk, or a wild turkey, a mule deer, or almost any kind of duck, you have a conservation organization that looks after your welfare, improves and increases the habitat you require, and promotes a community of humans who cannot wait to hunt you. If you’re a wild sheep, you have the best of both worlds: a conservation group devoted to ensuring your sustenance and expansion, and very little hunting pressure. But if you’re a member of the Wild Sheep Foundation, the very lack of hunting opportunities is problematic.

“We call it the ‘wild sheep economy,’” says Balfourd. “It starts with the fact that there are so few tags available for sheep, that in the circular modern conservation model — in which hunting licenses pay for habitat and management for the animals we buy licenses to hunt — sheep can’t pay their way. There just aren’t enough sheep, or enough sheep licenses. So, we started a way to make sheep hunting pay, through auctions and raffle tags, basically creating the long-odds opportunity to someday hunt sheep. And it’s worked. We have millions — $115 million so far — that Wild Sheep has raised and put back into sheep and the places they live.”

The people who buy into that sheep economy are sort of one-percenters. Not because they exist at the nether end of a financial continuum or because they’re lucky in the less-than-one-percent Montana draw. But because they’re the sort of hunters who embrace the impossibility of sheep hunting, the hard odds, and the even harder hunting conditions they encounter wherever sheep live.

“The people who support sheep are a little like Johnny Appleseed,” says Balfourd. “You know the legend: … the man who went along planting apple trees even though he knew he’d never sit in their shade or eat their fruit? There are people putting money into wild sheep restoration right now as you read this who know they will never get the chance to hunt a bighorn. But they’re working to create a future for sheep and for sheep country that they’ll never see. For them, it’s enough to know that the future is somewhere out ahead of them. That’s why sheep, and the people who love and respect them and work on their behalf, are so cool. And, to me, that’s the source of the mystique of wild sheep. They’re an idea as much as they are a living thing.”

Back in Glasgow, Kinzell looks up at the mount of his Missouri Breaks ram. It’s a gorgeous specimen, with curling horns large enough to make the all-time Boone and Crockett Club record book. To Kinzell, it represents the full extent of his life as a hunter.

“Don’t tell my wife I said this, but if my house were to catch on fire, the first thing I’d grab is that ram,” Kinzell says. “Okay, I’d grab family photos, too. But that ram would be going with me, flames burning behind me.”