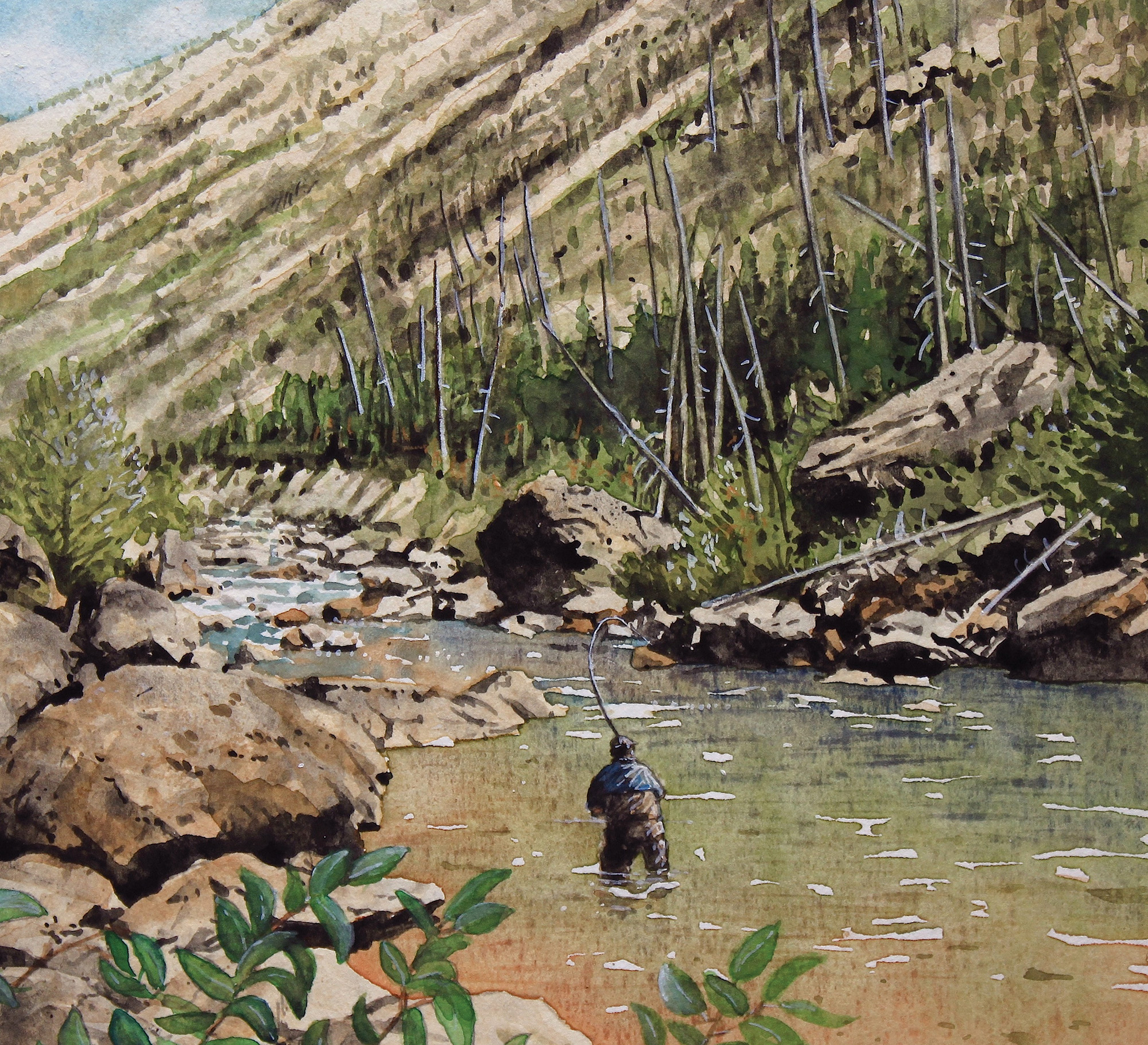 08 Jun Outside: On the Blackfoot, for Cutthroats

in Summer 2016, Outside Written by Greg Thomas | Illustrated by Fred Thomas Posted at 18:51h 0 Comments
Share

If you fish Montana’s Blackfoot River and you want to get away from the throngs, sooner or later you’ll encounter loose footing, high above the water, hoping that the entire mountainside doesn’t give way.

The experience wouldn’t be so bad if you couldn’t look directly across the river and see that, at some point, half a mountain — that looks exactly like the one you’re standing on — did slide away, and you’re happy you weren’t fishing the pool below when it happened. This is when you might also consider why it seemed so important to risk your life for a fish — a cutthroat or a bull trout — that you can’t keep and wouldn’t eat even if you were allowed to. But then, I guess that’s the point: You wouldn’t even be on that loose mountain if it were just about the fish. Here, hiking into the Blackfoot’s remote reaches, you’re searching for something else, something that’s getting far more difficult to find: a piece of water that isn’t being throttled by other anglers.

Fortunately, with fishing, solitude is always achievable if you’re willing to work for it. And that usually means hiking in.

That’s what I was doing on the Blackfoot last summer, hiking into a steep canyon for cutthroats, having somehow worked my way onto a ledge. I looked up, felt dizzy, nearly tipped backward, and said to my partners, “Let’s drop back down and pick a better spot.” We were trying to get around a massive rock cliff that dropped straight into the river. It was too deep to wade around the thing, and swimming upstream against the strong current would have been futile. So we would have to go up, farther than we wanted to, at least 1,000 feet, to get around the cliff and additional rock outcrops. Then we’d need to skid our way back down to the river. It amounted to a lot of lung- and thigh-burning work, but when we completed our challenge we found some nice cutthroats rising in a pool. And, more importantly, there weren’t any anglers upstream or down. Now we could work our way upstream at our own pace, from one pool to the next.

It was the dog days of August and I was fishing with friends who work for a rod manufacturing company. We had their new rods in hand, ready to test. One was perfect for cutthroats, being a medium action 9-foot, 4-weight that would toss dry flies gently. The other was an odd 10-foot-long, 3-weight specifically designed for Czech nymphing, a strategy that employs numerous flies, tied sequentially along a leader so that an angler can fish at various depths with several styles of flies all at once.

I was familiar with the technique, but not interested enough to have tried it. When this friend set up his Czech rig and started drifting three wet flies, I really wanted to say, in my best Mr. T impersonation, “Hey fool, don’t you know cutthroats are suckers for dry flies?”

Czech nymphing, which shines in competitive fly-fishing tournaments, is one of several new methods used to catch our increasingly skeptical trout. It arrived in the U.S. just a little before tenkara made its mark. Tenkara is touted as an inventive way to get new people into fly fishing because it eliminates the frustration of line control. To fish tenkara you get a telescoping rod and a short fly line and leader, but you leave the reel at home. This means you don’t really cast a fly — you just roll the line onto the water and you can’t increase distance if you really need to. To me, this is a great step backward, and I’m not alone in that opinion. Last summer, while fishing with a group of anglers, half decided to try tenkara. When we met up later and I inquired, one of the women said, “That tenkara bored me to death. We roll-casted into the same shallow riffle for six hours and never caught a fish longer than 8 inches. When I asked what to do if I hooked a big fish they told me to throw my rod in the water and follow it. Once the fish tired, I was told, I could grab the rod and continue the fight. They didn’t tell me what to do if the fish swam to the other side of the river … with the rod!”

These new techniques may be a product of manufacturers wanting to sell product, just saturating the market with “more” and “new.” But they may also represent a shift in the angler’s mind to try methods that may increase the catch even on heavily fished waters. I’m not against these methods, and I’m not saying I won’t, eventually, try them. But I still enjoy casting a modern rod, equipped with a reel, tying on one or two flies at a time, including the classics for cutthroat, like the elk hair caddis, parachute Adams, Royal Wulff, and stimulator. And in the end, how many fish do you need? Is it about numbers or is it about a few good fish from a beautiful river on a sparkling day? I’ve always taken quality over quantity and try not to base the merit of a day on the fishing itself, which lessens the pain a little when the fish win.

On the upper reaches of the Blackfoot and its tributaries, the water runs almost perfectly clear in late summer so you can see these fish rising from the bottom for a fly. You can also, in some places, see giant bull trout resting at the bottom of these pools. My reaction to these fish is like seeing a big bull elk ghosting through the forest — I go into an instinctual hunting mode. For these bull trout, unfortunately, there is no hunting season — on the Blackfoot you can’t specifically fish to these brutes, which range to 10 pounds or more, because they are a protected species and, according to biologists, they can’t take the added pressure of being landed and released.

Unfortunately, this law doesn’t mean much to some anglers. It’s common knowledge that anglers often tie on sinking lines and the big white streamer flies that bull trout prefer, under the guise they are fishing those setups for large and aggressive brown trout or big cutthroats. That’s ridiculous, of course, but without much enforcement of the regulations you can fish any stretch of the Blackfoot and find anglers slamming the water with 6-inch-long, segmented, and heavily weighted flies any summer day.

As we fished the upper Blackfoot last summer, leapfrogging each other from one nice pool to the next, I could easily understand why so many people love to fish. The river ran between steep canyon walls and the water was turquoise colored. Every 50 to 100 yards the river broke into a small rapid or surged around large boulders to create pools below. Each of these pools held fish, and if you couldn’t get one to take a fly you at least saw it rise for inspection. With the wind blowing and the water surging by, communication was minimal. When one or the other of us caught a fish we might hold it high, momentarily, so that the others could acknowledge the success. But mostly, we fished alone in silence, one to a pool, each of us in our own little trout world trying to master the currents for the drag-free drifts these cutthroats demanded.

In one particular place I saw a big cutthroat, probably 18 inches long, holding in a narrow side channel. I cast everything I could think of — all the classic patterns — but he wouldn’t eat. I would have quit him and moved to the next pool if I hadn’t glanced into my fly box one more time. Tucked into the rows, obscured by hairwings and foam bodies, was a size 18, low profile, synthetic winged ant that was tied for me by a friend in the Bitterroot Valley. He’d told me that when nothing else worked, this ant would.

I knotted the black ant to a wispy tippet and tried the big fish. On the first cast he took the fly, but I was a little surprised and set too hard, breaking the leader. I yelled, really loud, something that I won’t repeat here. When I looked up, my friends were looking downstream as if questioning why I’d yelled. I leaned over and put my hands on my knees, then raised up with hands high and spread wide, the standard signal that I’d had some kind of encounter with a big fish.

With a fly imbedded in that cutthroat’s lip, he wouldn’t eat again. So I sat down and was tying on a fly when I considered that my signal may have implied that I’d hooked into a big bull trout and not a cutthroat, which was not the message I wanted to send. So, once I got a new fly tied on, I worked my way up to my friends and relayed the experience. They, too, had missed a few big cutthroats and one, the Czech nympher, hooked a small cutthroat and was working it in when a big bull trout, probably longer than 30 inches, rose out of the pool and picked the fish off his line. He’d considered tying on a big streamer, and was prepared to use the standard excuse, but he couldn’t bring himself to cheat. When I said, “Most people would have done it,” he replied, “Yeah, I don’t know how anybody doesn’t do it. It’s like someone leaving a pile of cash on the sidewalk, expecting people not to pick it up.”

Later that day, completely worn out from going up and down the canyon walls, and working our way over boulders and logjams, we caught a main trail that would lead us back to our truck. From our vantage, we could see an angler far below, casting over the water. From the size of the splash the fly was making we could tell he was going for bull trout. I wanted to hike down there and tell him about the regulations, but he already understood them. And we thought about rolling a few rocks off the canyon rim, hoping they would splash into the pool around him and indicate our disgust. But that could have killed him. So we just continued along the trail knowing that some people will fish for bull trout on the Blackfoot and others won’t.

Which reminded me of the current state of the Blackfoot and other streams. Some of us will continue to fish with the masses on easily-accessed water and either love it or hate it. Some of us will hike into remote sections of these rivers and in doing so create the kind of fishing experiences we desire. And some of us will change our tactics to suit our needs. And if you need to catch a lot of fish, you might want to become a Czech nympher.

During our hike to the truck, I’d taken a mental tally of how many fish we may have caught that day. I figured I’d caught eight or nine and missed twice that many. And I figured the Czech nympher got about that many, perhaps a few more. When we finally reached the truck, and tapped into a cooler of ice-cold beer, I said to the Czech nympher, “How many fish do you think you caught today? Ten or 12?”

He shook his head, grimaced in disgust and said, “Twenty-two.”

When he pulled a clicker out of his pocket and showed me the number 22, I said what anyone else who thought they didn’t care about numbers would say: “Hey, let me see that rod and those flies.”