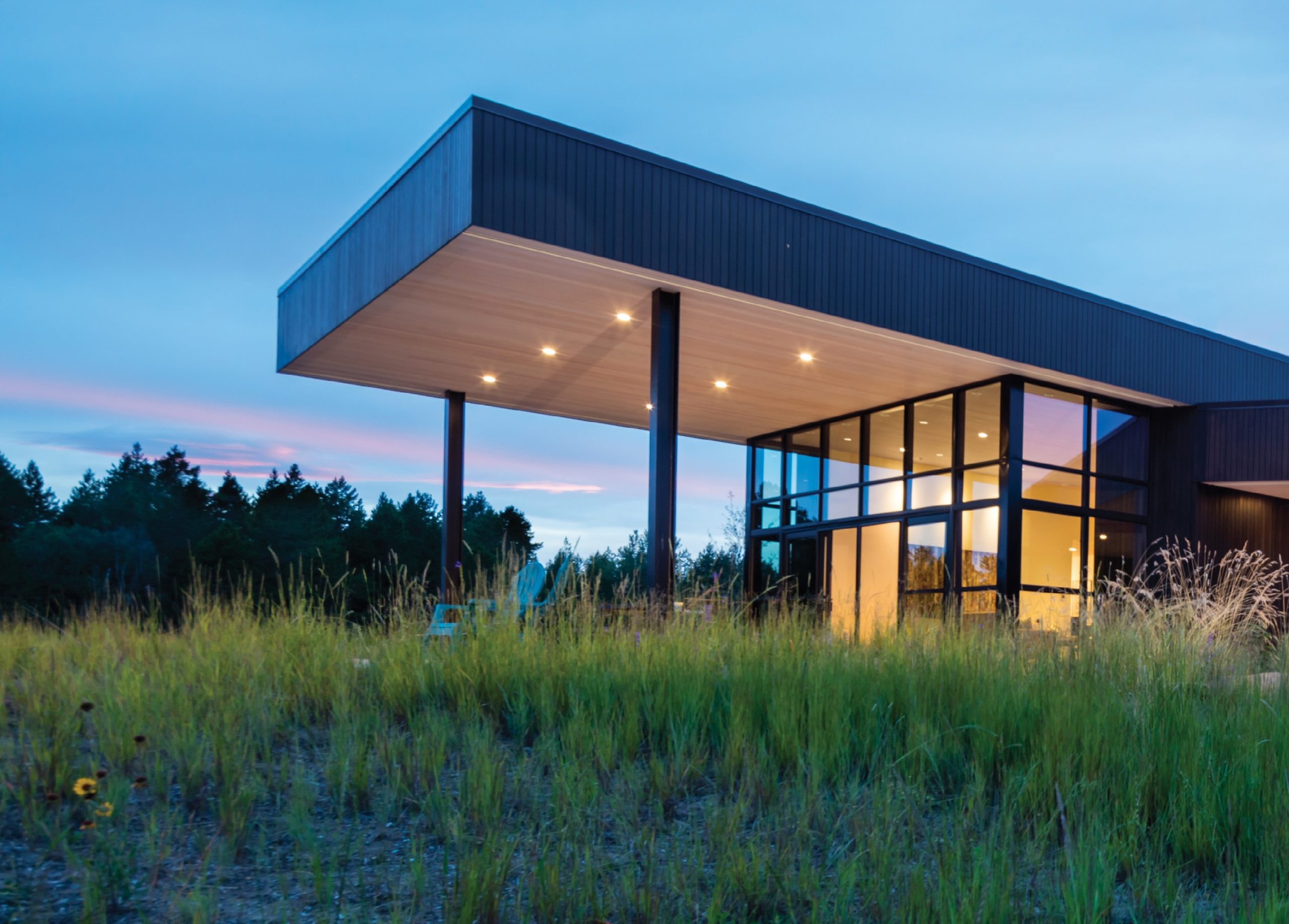 A view across the native grasses on the property’s southern side reveals the three structures that make up the residence: the one-bedroom main house on the left; a two-suite guest building to its right; and, beyond, the structure containing a woodworking shop and the garage.

IN SIGHT OF TWO TROUT STREAMS JUST OUTSIDE OF WHITEFISH, a home composed of three utterly simple buildings celebrates the beauty of Montana. Just hours before flying home to Columbia, Missouri, at the end of a two-week visit to this mountain town in 2014, Mary and Hal Williamson happened upon a 15-acre wedge of open meadow for sale on a bluff at the meeting point of the Whitefish River and Haskill Creek, both ideal spots for fly fishing in the Flathead Valley. “Two weeks later,” says Hal, a lifelong angler, “it became clear that it was the right time for us to retire and move to Montana.” They bought the property and prepared to leave Columbia where the couple had spent 36 years working for the University of Missouri: she as a counseling psychologist, and he as a family care physician and, for 10 years, the CEO of its health care system. 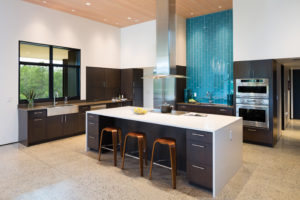 At one end of the great room, the spacious kitchen features custom quartz counters and a backsplash made of subway tiles.

After happily discovering that several magazine clippings and online postings of Montana homes that they liked were all designed by the same architect, they hired him: David Koel, a principal in the 13-office, 450-strong multidisciplinary architecture/engineering/design firm of Cushing Terrell, and head of its team in Kalispell, just a half hour south of Whitefish. His work, notes Mary, “had the simplicity and the style we were looking for.” 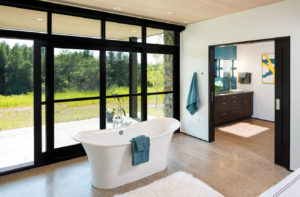 A sleek soaking tub sits directly in front of sliding glass doors that lead to the master bedroom’s private patio.

They desired a simple approach to life in Big Sky Country, and so they asked for a relatively small, one-bedroom main house with a master suite for the two of them, and, says Hal “one big continuous space for the living room, kitchen, and dining room.” To accommodate visits from friends and relatives, including their two grown sons and their families, the Williamsons “wanted a place where guests could be separate and independent but with an emotional and physical attachment.” Also on their list of necessities: a structure that contained both a garage and a space where Hal could continue pursuing his lifelong passion for woodworking, a building which also would be capable of “sheltering our home from the world while fitting in with the hayfields and horse pastures around us.” 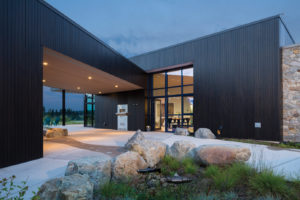 To the left of the main house’s front door, a Wood Stone wood-burning pizza oven, set into the exterior wall, helps transform the courtyard into an ideal space for informal outdoor dining.

Style requirements, Hal notes, were far more succinct. They told Koel that they preferred something on the spartan side, more contemporary than traditional. “We said we’d be partial to materials like glass, steel, concrete, wood, and some stone, not monochromatic but close to it, and clean,” he says. 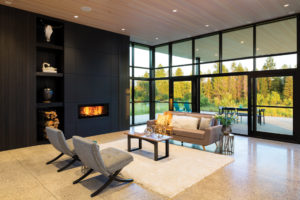 Plate steel forms the surround for the gas fireplace in the great room, which has floors of 4-inch thick concrete withradiant heating.

Not that such a minimalist menu made the structures any easier to build. “You have to do so much planning and everything has to be so precise in order to make buildings look this simple, because you’re not covering anything up,” observes Ryan Dunn, project manager for the Montana-based contractor, Martel Construction. 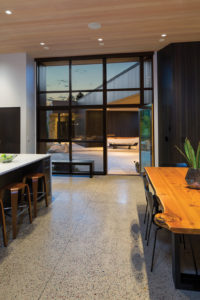 An accomplished woodworker, homeowner Hal Williamson made the knotty-pine dining table with a steel base and placed it in between the kitchen and living room near the home’s entrance.

The final design achieved all of those goals with surprisingly spare elegance in a simple collection of spaces that Koel says drew inspiration from the landscape. “When you can draw meaning from the site and its surroundings, it really does add to your appreciation of the space itself,” he adds. With that principle in mind, they sourced local materials, including black-stained western red cedar boards, the Montana quartzite called Chief Cliff stone, and even concrete from a Whitefish-based company. 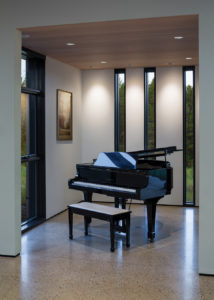 Organized in a triangular layout that echoes the boundaries of the parcel, the home — which the team came to refer to as the Confluence House for the meeting point of the two waterways that it overlooks — consists of three separate but interrelated single-story structures totaling 4,900-plus square feet. Gazing westward toward the Whitefish River, the main house includes a master suite with its own private terrace; living, dining, and cooking spaces that share a great room, off of which juts an alcove for Mary’s baby grand piano; and a small office for her. 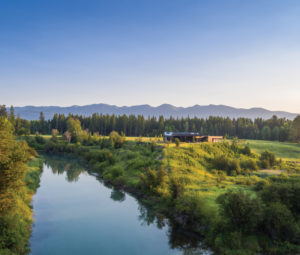 The residence was sited to enjoy sweeping vistas of the Flathead Valley.

The front door opens to a breezeway that connects to a separate two-suite guesthouse (also the setting for Hal’s office), facing southeast toward Haskill Creek. Concealing those two buildings from the gravel road that approaches the site is a large, long structure resembling an old farm shed, containing a garage on one end and Hal’s woodshop on the other, separated by an open passageway through which visitors can enter. “The shed achieves privacy while also providing an interesting, welcoming gateway to the home,” Koel says. Solar panels on the south-facing slope of the shed’s standing-seam steel roof provide almost half of the property’s annual electrical power needs. 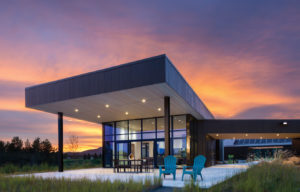 The large overhang sheltering the great room’s poured-concrete patio provides ample shade in summer and helps orient the view toward the confluence of the two streams.

Both inside the courtyard (formed by the three buildings) and beyond the built environment, landscaping designed by Wes Baumgartner of Cushing Terrell not only features native plants but also conserves water. Sculptural steel scuppers send rainwater cascading off the roofs into channels paved with natural river stones that empty into an ornamental collecting pool, which ultimately returns it to the soil and back to the rivers. Gravel pathways lead from the house and guesthouse down to the river and creek. 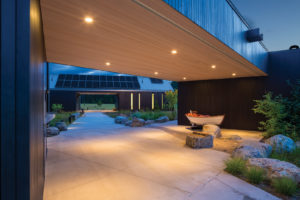 Just outside the guesthouse, a wood boat crafted by the homeowner is displayed near boulders surrounding a collecting pool for rainwater.

Ultimately, those kinds of intimate connections to the natural surroundings, unencumbered by extravagant architectural flourishes, are what distinguish the Confluence House from more traditional homes in Big Sky Country. “The simplicity of form is what’s most compelling about it,” says Koel. Adds Hal, summing up the ultimate effect of living amid such elegant simplicity, “When we’re inside, the home makes us feel like we’re outside.”