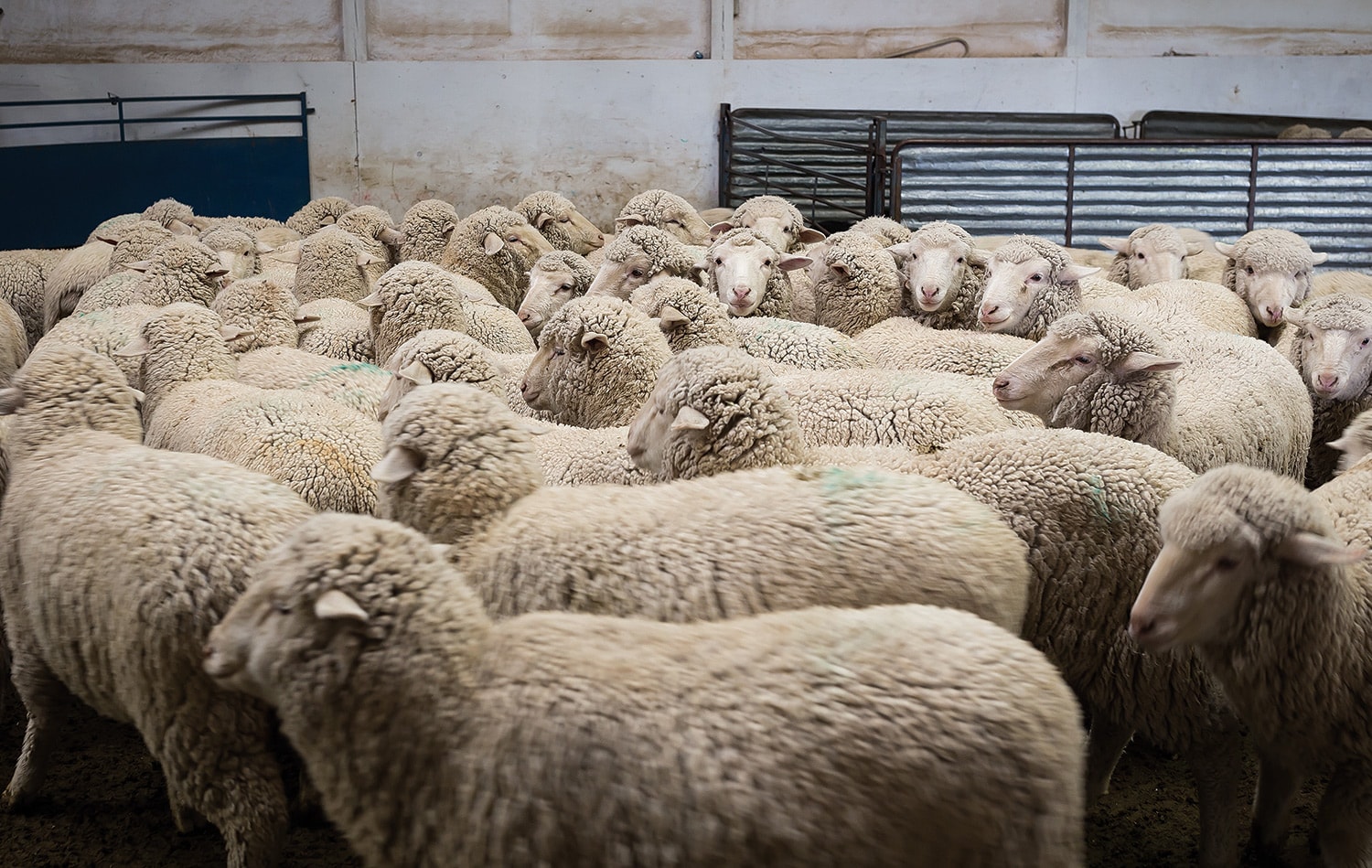 Lambs await shearing in a holding pen at the Helle Rambouillet Ranch outside of Dillon, Montana. 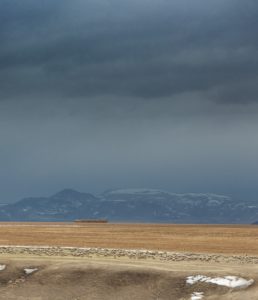 A March wind blows over the Beaverhead Valley and piles dark clouds on the horizon, harbingers of the coming snow. Tucked into a fold of land outside of Dillon, Montana, a low-slung barn reverberates with noise: Sheep bleat, dogs bark, people holler, and above all floats the constant metallic hum of shearing clippers. Four men work on a raised platform, its plywood surface slick with lanolin, each deftly moving through the sequence of steps they’ve executed thousands of times before: Pull a lamb from the chute, flip it on its back, clamp it between the knees to hold it down, and commence shearing — first the belly, then the legs, head, and back. Roughly 55 strokes if you’re good. 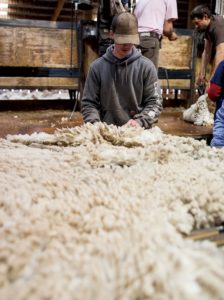 A handler skirts the wool, examining and tidying it up before folding and bundling it with the others.

The sheep are docile, the men swift and precise, and two minutes later a full pelt drops to the floor in one piece. The freshly shorn scamper back to their flock, and the shearers begin again. Handlers pick up the pelts and toss them into the air like a blanket unfurled over a bed, and the wool settles over skirting tables — round metal tables that spin — where they will be examined, tidied up, and then neatly folded to be bundled into a bale with others.

The year could be 1900. In many ways, little has changed in the world of sheep husbandry and the mechanics of shearing. But if you zoom out, take in the rest of the scene, and learn about the context, it very quickly becomes clear that this is a 21st-century operation — a modern approach built on the strengths of the past.

“Today, people want to know where things come from. They want to know where their food is from and how it’s grown,” says John Helle, speaking over the din in the center of the shearing barn. “People are starting to want to know where their clothes come from too.” Fifty-something, broad, muscled, with dark features and a quiet confidence, Helle peers out over the action from beneath the brim of his tattered hat. In worn jeans and muck boots, he looks every bit the Montana sheep rancher, which is fitting, since he’s the fourth generation in his family to be just that. 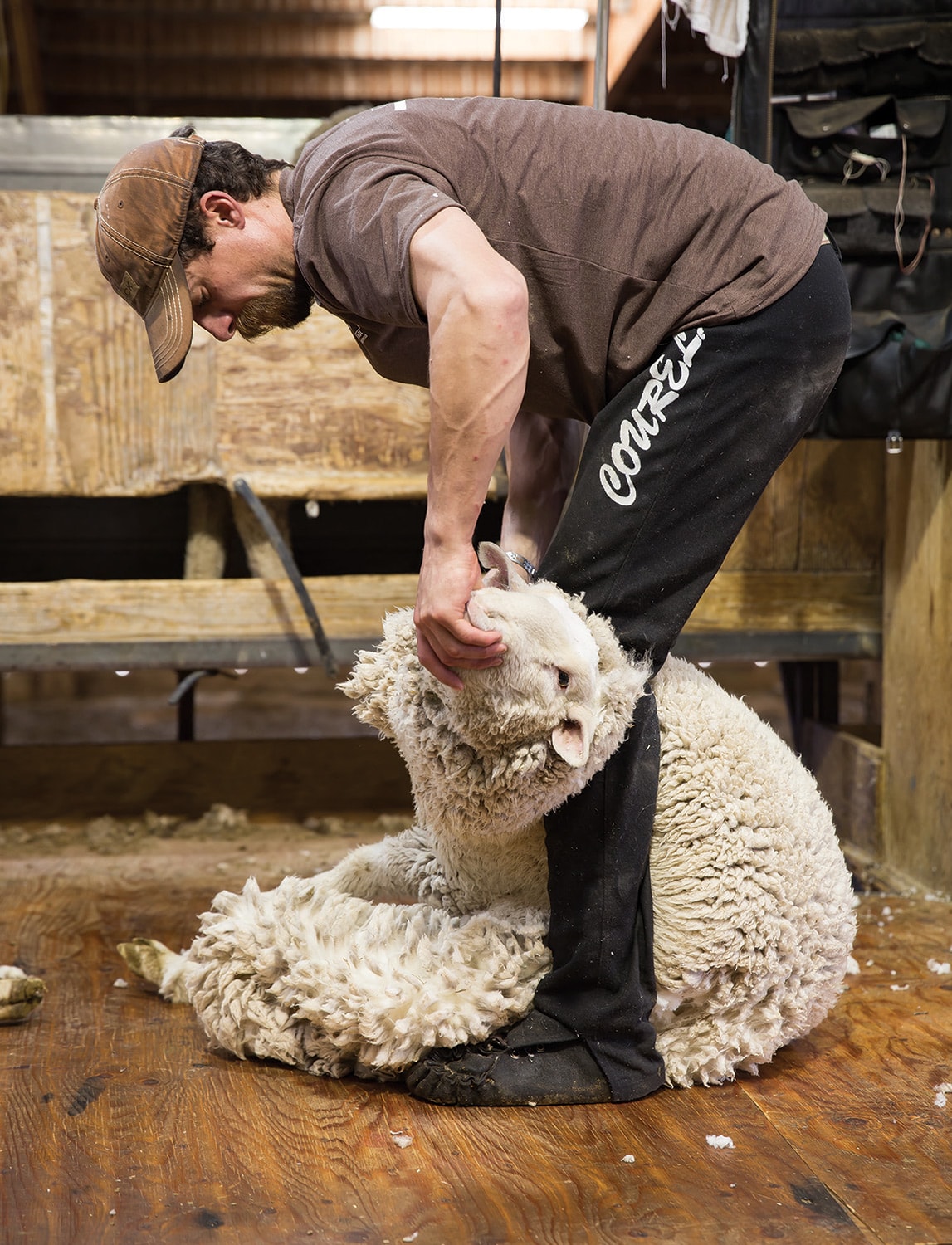 A good shearer can separate an animal from its pelt in roughly two minutes. 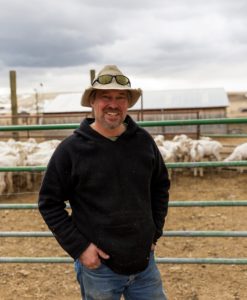 But he’s also a conscientious businessman who was frustrated by the anonymity and homogenization of the global wool market. Here the Helle family was, raising a flock of 10,000 Rambouillet sheep — painstakingly cared for and bred over decades to produce the finest merino wool — and they were selling it to the global commodities market, where their product would be mixed in with lower-quality wool from dozens of other sources and sold to mass producers or overseas.

What if, Helle thought, we could keep our wool in America? What if we could work with American textile mills — an industry that’s been in free-fall — to retool and start making wool fabric again? What if we could find garment manufacturers to cut and sew clothes here too? What if, he thought, similar to a farm-to-market approach, we could do sheep-to-shelf? 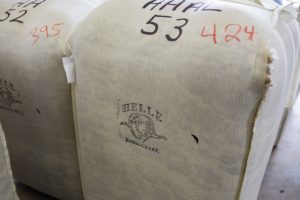 After being sorted by thickness and quality, wool is bundled into bales for transport.

Through happenstance or fate (or the savvy intervention of friends), in 2013 Helle found himself riding the chairlift at the local ski hill, Maverick Mountain, next to Robert “Bernie” Bernthal, a veteran of the outdoor clothing industry. The two of them got to talking, and, as the story goes, a few lift rides later, a company was born: Duckworth, the country’s only source-verified, vertically integrated, American-made, sheep-to-shelf, wool clothing company.

Like all nascent ventures, it was a gamble, and it presented some upfront logistical challenges: Most of America’s few remaining textile mills are set up for cotton and synthetics. Wool has unique processing needs, but the owners of a mill in South Carolina were up to the challenge and excited by the prospect of new jobs. The same held true at manufacturing facilities in North Carolina, Chicago, and the Northeast. Duckworth brought on Graham Stewart, a revered guru of the wool industry and longtime London denizen, to help design fabrics based on their needs and specifications. Pretty soon, the business was up and running.

And it took off like wildfire, with sales doubling every year since. People heard about this honest-to-goodness ranch family with a commitment to American manufacturing, saw photos and videos of the Montana landscape where they ranched, and bought into the narrative with gusto. A perfect combination of timing, decades of hard work, quality craftsmanship, a compelling story, and friendly market forces — not to mention a serendipitous Christmas Eve feature on “The Today Show” — launched Duckworth into the stratosphere. 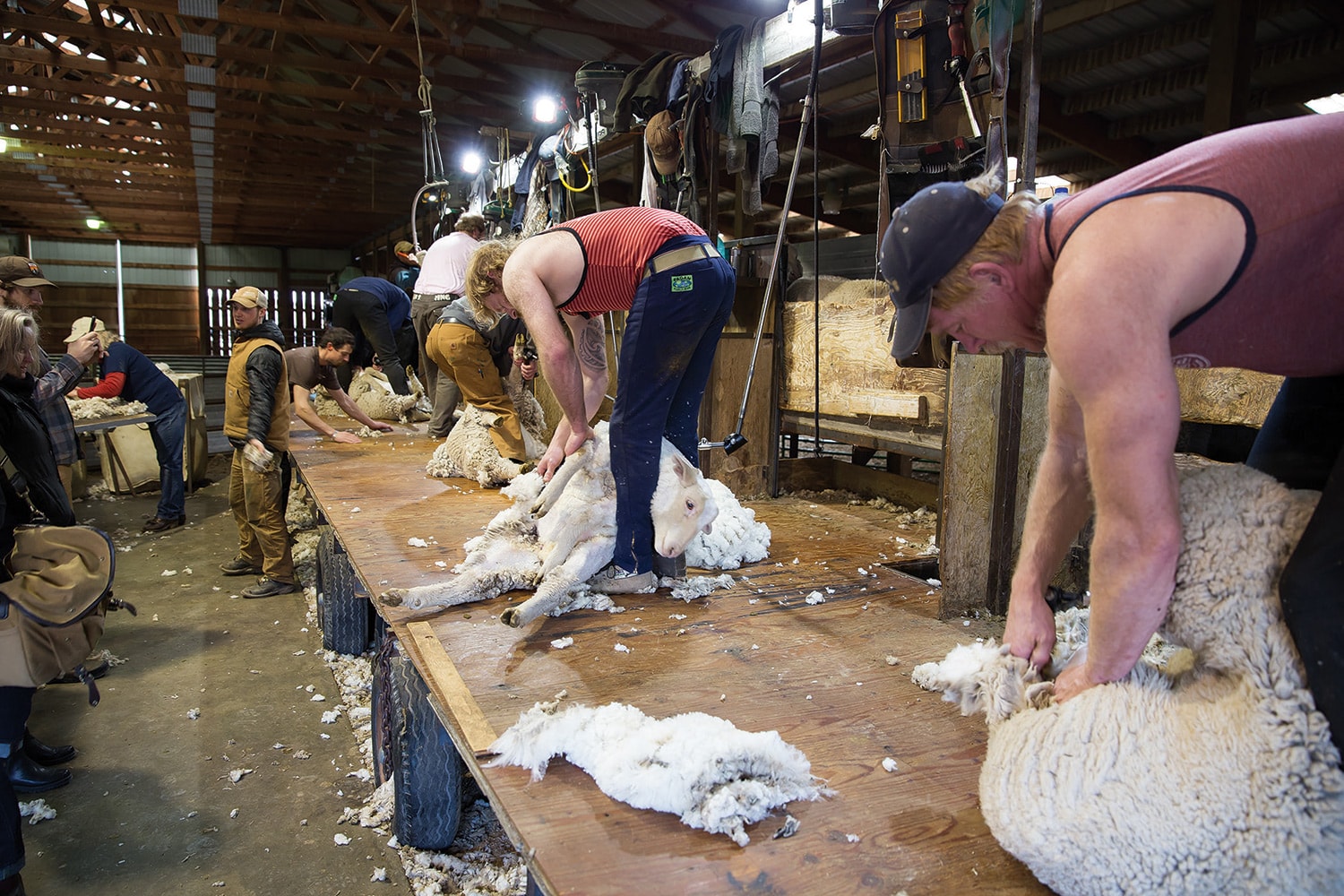 Working together, this team will shear thousands of Helle sheep over the span of a couple months.

Still, they maintain their commitment to quality over quantity, and regularly sell out of their customer favorites. “What we’re trying to do,” says Danielle Fedore, sales manager for the company, “is grow in a specialty way, in a way that cares about the consumer and also the brick and mortar retailers. I’m not saying we’ll never go to the big online retailers or big outdoor box stores, but at the moment our priority is to take care of the people who were with us when we were a no-name brand.”

Those people are more than happy to keep supporting Duckworth in return, and the brand is developing a cult following among those with a passion for the outdoors, whether they’re fly fishers, skiers, or ranchers. Online reviews rave about the products’ perfection, and true acolytes buy their favorites in every color. 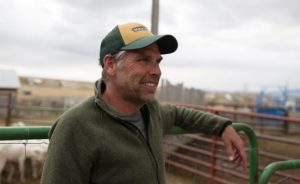 Don Rogers, president of Duckworth, brings his years of experience in the outdoor apparel industry to the young company.

Which is no small feat, given the price tag on the Duckworth line: A T-shirt made out of their signature Vapor fabric (touted as fast-drying, non-stinky, lightweight, and durable) will run you $65. Briefs of the same fabric are $40. It’s a lot of cash to shell out for a pair of undies, but in today’s market — one that’s increasingly interested in high-quality, durable products with a human story behind them — it’s a price that customers seem happy to pay.

Back in the shearing barn, visitors from outdoor brands and adventure publications watch with fascination as the shearers work, as the Peruvian shepherds quietly supervise, as countless black-and-white border collies move flocks from pen to pen and then come to wag and beg for attention from the onlookers. The visitors snap endless photos, chat about area ski hills, and ask questions. It’s an odd mixture of city-slickers in expensive outdoor gear mingling with rough-and-tumble ranch workers, but everyone gets along, and everyone’s there for the same reason: to get this world-class wool out the door and in front of savvy and discerning consumers. It’s Old-West-meets-New-West in the best possible way.

Helle stops chatting to good-naturedly heckle Duckworth board member Rob Isham, who is trying his hand at skirting a freshly shorn pelt. He tossed it neatly over the 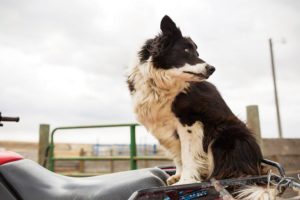 table, but his technique when rolling it up leaves something to be desired. “Make sure you roll that shoulder up tight!” Helle hollers. “You forgot to get that neck in there!” Isham grins and tries again, then tosses the bundled wool into a giant bin. “That’s how I write contracts too,” jokes Isham, a lawyer. “I just gather it all up and throw it in!”

Helle’s focus on technique isn’t just a matter of fastidiousness — the wool will be tested for thickness to determine what grade it is, and thus which type of material it will become. That sample must be taken from the shoulder, so when the pelt’s rolled up, the shoulder is left as the outermost layer.

“What we do is kind of unique, since we’re testing every individual fleece,” explains John’s son, Evan Helle. “We have certain parameters that we want that wool for, and different parameters are better for different garments.” He pulls a single strand from a pelt, and puts it on a slide which he then feeds into a micron-testing machine, on loan from the Montana Wool Lab at Montana State University (one of only two wool labs in the country). The machine scans the entire fiber from end to end, measuring the width. Then it provides an average, which indicates how fine the wool is: If it’s below 19.2 microns, it’s AAA wool, the finest and softest, and will become base layers, or anything that will be worn against the skin. Anything between 19.2 and 30 microns is AA, and over 30 is A, which will go toward outerwear and socks.

It’s a level of refinement that other wool companies largely don’t bother with — often one pelt from an entire bale will be tested, rather than each pelt. But the more rigorous the testing, the better matched the wool is to each specific need. Fedore puts it succinctly: “We’re letting the finest wool in the world be the finest wool, and not messing with it.”

Ultimately, that’s what’s so special about Duckworth’s approach — they’re not messing with a good thing. There are no gimmicks, no fancy processes, no glitzy marketing campaigns. They’re making a solid, sound product the way the Helle family has for generations, right there on the same 25,000 acres of Montana grassland that they’ve been on since the 1940s.

What has changed, though, is that people are starting to pay attention to provenance. And with the advent of things like outdoor magazines, social media, and the internet, the story of the Helles and their 10,000 sheep reaches an audience that is poised and ready to support them. “People want to know we’re taking good care of our animals and our land, that we’re making the best products that we can,” says the elder Helle, “and we can show them that.”