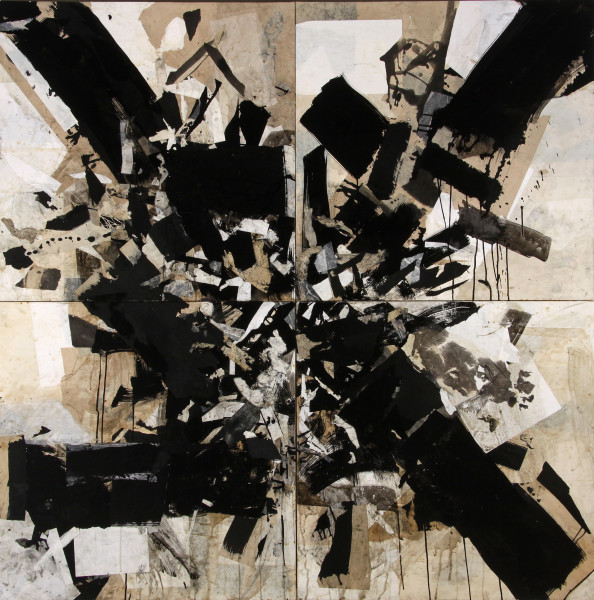 23 Jul Layers of the Mind

JERRY IVERSON’S COLLAGED PAINTINGS SPEAK TO THE BIG QUESTIONS. Although he uses mainly black ink and white paper, his perspective is far from simple. For Iverson, the investigations into God, evolution, language and war pivot on the intersections of black lines where connections are made, or not made. His abstract work reaches into our collective consciousness, taking with it pointers from the unembellished landscape that envelopes his life.

“In 1996 and 2003 we had to evacuate because of fires near our home,” Iverson says, of his place north of Big Timber. “The burnt trees make stark and oddly balanced black lines, and the dry grass and snow give a beautiful golden white background. I love the look of this harsh land.”

In his workspace there sits an old paint can filled with rabbit skin glue on top of an electric hot plate, which sits on top of a plank, which sits on top of a wood stove. As the gelatinous glue begins to warm and liquefy, its gamey smell permeates the small log cabin studio. Papers, postcards, posters, notes, photographs and a hornets’ nest stuck to cardboard cover the walls. Hanging from the rafters are the three 80-inch long panels Iverson is working on. They need to hang together because in the end they will be a single piece.

Iverson likes to work this way because it makes the pieces more complex and adds tension if the panels are constructed individually and screwed together at the end.

“I start with Sumi ink on different kinds of paper,” he says, laying out one of the panels on a makeshift workbench, made from an old sawhorse covered in cracked lacquer and dried glue. He is surrounded by mounds of tissue paper, newsprint and thicker architectural paper, like a bird secure in his nest. Most of the papers have been marked with his Sumi ink lines, thick calligraphic gestures Iverson’s made using the same broad brush he’s used for the last 13 years.

When the rabbit glue — the oldest of all glues — is ready, he lifts the can onto the flat panel and begins a process of layering and gluing. Reaching around behind him, he takes a sugar-white sheet and tears off a piece, leaving most of the inked character intact. Dipping the entire paper into the glue bucket, smoothing it onto the panel, he continues to reach, rip, dip and smooth, creating a rhythm of his own. Although he is talking at the moment, when he is alone in this place, his thoughts and intentions alone guide his actions.

“My passion is philosophy,” he says, reaching for a diaphanous slip of tissue paper. “I came to art after studying philosophy. For me, art is an expression of a philosophical idea.”

The papers he reaches for, either underfoot, from a box, or beneath a pile are his palette.

“I know where everything is,” he says. “I know what I want, to build up the layers, and how I want it look at the end.”

Before he starts the collage process, he marks his found paper with the Sumi ink lines. But before he even does that, he sketches the abstract lines in a hardcover black book he keeps by his side; although all of his paintings look spontaneous, they are well-thought out and conceived.

In 2011, Iverson was chosen as one of seven award-winners for the Contemporary Northwest Art Award, out of about 300 nominees. Bonnie Laing-Malcolmson, The Arlene and Harold Schnitzer Curator of Northwest Art at the Portland Art Museum, reviewed all the work and selected 28 finalists.

“I wanted to choose artists I thought had the best work in Washington, Oregon, Idaho, Montana and Wyoming,” Laing-Malcolmson says. “From that group I chose seven award winners.”

The seven winners were featured in a group show at the Portland Art Museum, which included Iverson.

“I think there is a kind of honesty and immediacy about his work,” she says. “I like that it’s beautiful and abstract. The colors relate to the Montana landscape in winter. And they come from a deeply personal space in Jerry. There’s a power in it that comes from the ideas at the root of the work. He’s conceptual but he also looks at the land around him.”

She points to the black lines of fence posts and the bark of burnt trees.

“It’s not literal, it reflects his feelings about humanity, war and peace,” she says. “He sheared sheep for years and his Language series is about how he met people he respected but were philosophically different from him.”

Laing-Malcolmson chose Iverson’s work because she felt the paintings were powerful, centered and strong.

“The way he thinks about things invests the work with a kind of spirituality it mutely communicates,” she says. “Although Iverson’s work often finds its source in conflict, he retains a heartfelt optimism about the value of making art and art’s ability to allow us to see what other people see, and feel what other people feel. His dynamic compositions have an imbedded spirituality; they demand focused attention and convey a sense of infinite possibility.”

Iverson explores meanings and expressions of one idea at a time, focusing his work on a series until he feels he’s said what needs to be said. Over the years he’s addressed the difficulties of communication in his Language series, the results of stress in his Nerve Block series, the effects of living during wartime with his Line Bombs series, and the brutal honesty of evolution through his series called Darwin’s Trees. His newest series is Laws of Nature and deals with the linear reality of life and causation.

“I like the obviousness of the black line: to be simple, clean, straightforward,” he says. “In the last dozen years, all I’ve done is black lines with the same brush, the same ink and the same glue. Now I’m using the circle, because [of] the different connections between the lines. It expresses a kind of fluidity and necessary relation. But even circles are really straight lines.”

The most important characteristic of the circle, for Iverson, is that it makes contact with another circle, like a causal chain of events over a long period of time.

Through the layers, thin strata of paper with black strokes laid one on top of the other, images appear while fragments disappear from view. Iverson works, himself a steady tattoo of linear breath, leaving a contrail of Sumi ink echoed by the ever-white. While the dark lines stand out, the white space is just as weighty. Think of the universe turned inside out: the white light of stars and the dark matter between them.

Rod Pulliam, owner of the Pulliam Gallery, in Portland, Oregon, has represented Iverson since 1993.

“He was in a group show and I fell in love with the work,” Pulliam says. “When that gallery closed I asked Jerry to join ours.”

“His work is very personal in that everything is informed by his relationship with the land. He used to use these found materials and created things that were multidimensional; his markings, lines and materials in his Language series, you could see fence posts and landscapes and dried creek beds. It looked like an effort to communicate through ideas and writing. The materials were just beautiful and the work was very sophisticated.”

“Even the Darwin’s Trees were a personal struggle as to where he fit in the world,” Pulliam says. “It comes to him intuitively, there’s a similarity to Asian art — the happy accident idea and a sense of surface.”
Over the years Pulliam noticed a consistency in Iverson’s work.

“There’s a lot of emotion,” he says. “And there’s sincerity to it. It’s not trying to be anything other than what it is. He’s his own audience.”

“I’m not the only who sees this,” he says. “The people who purchase Jerry’s work over the years tend to be those in the creative world: artists, curators, architects. I’m not sure what it is.”

To experience Iverson’s work is to live in the layers of white and tightrope along the black ink — dark lines shortened by language, lengthened by logic — to feel the limitations of life and the expansiveness of thought.

“I can’t help but think that much of my art is about my broken and abandoned beliefs,” Iverson says. “But if there was one response I’d like from the viewer, it’s contemplation.”

Iverson is represented by the Turman Larison Contemporary in Helena, Montana, the Pulliam Gallery in Portland, Oregon, and the Susan Street Fine Art Gallery in Solana Beach, California. 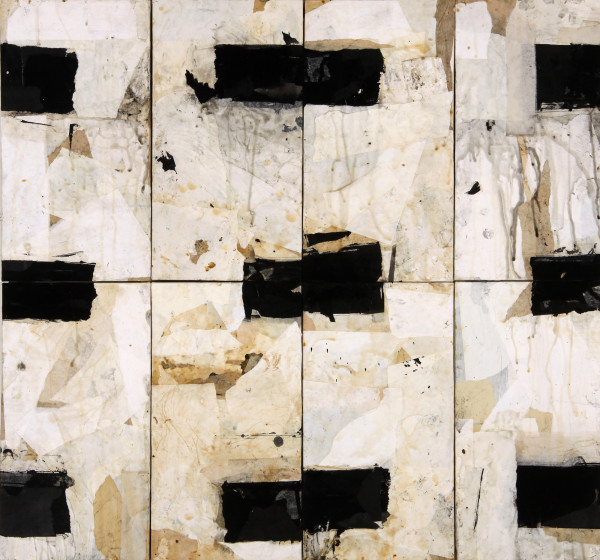 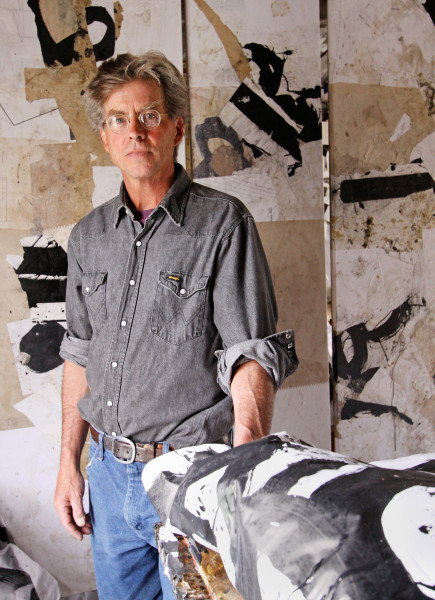 Artist Jerry Iverson standing in front of a work in progress. 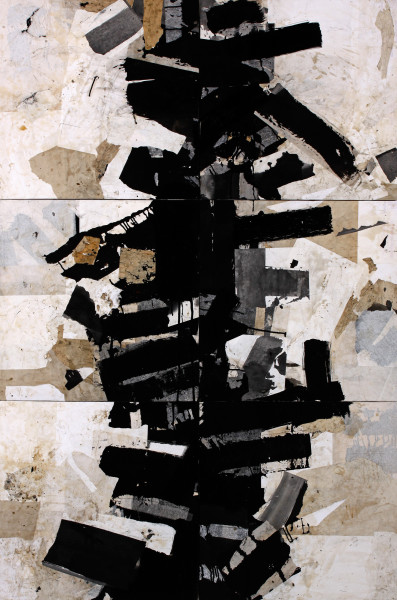 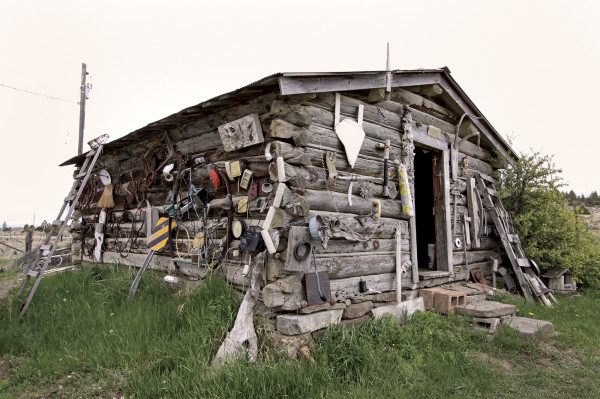 Jerry Iverson’s studio, located north of Big Timber. The cabin was one of the original buildings on the land. The outside is adorned with various objects, including old telephones and a cassette boom box. 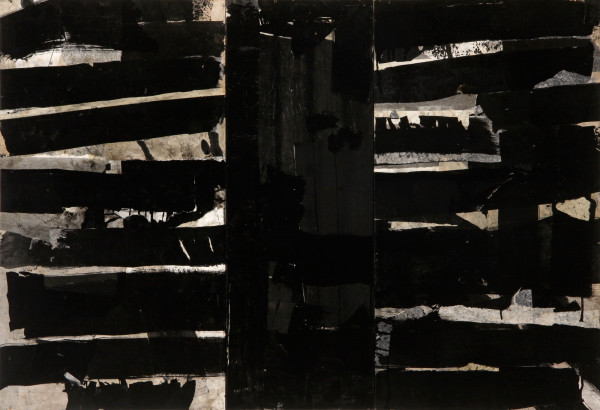 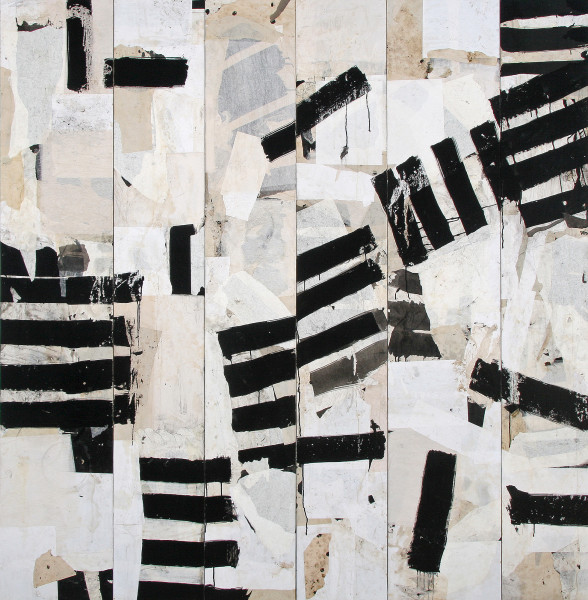