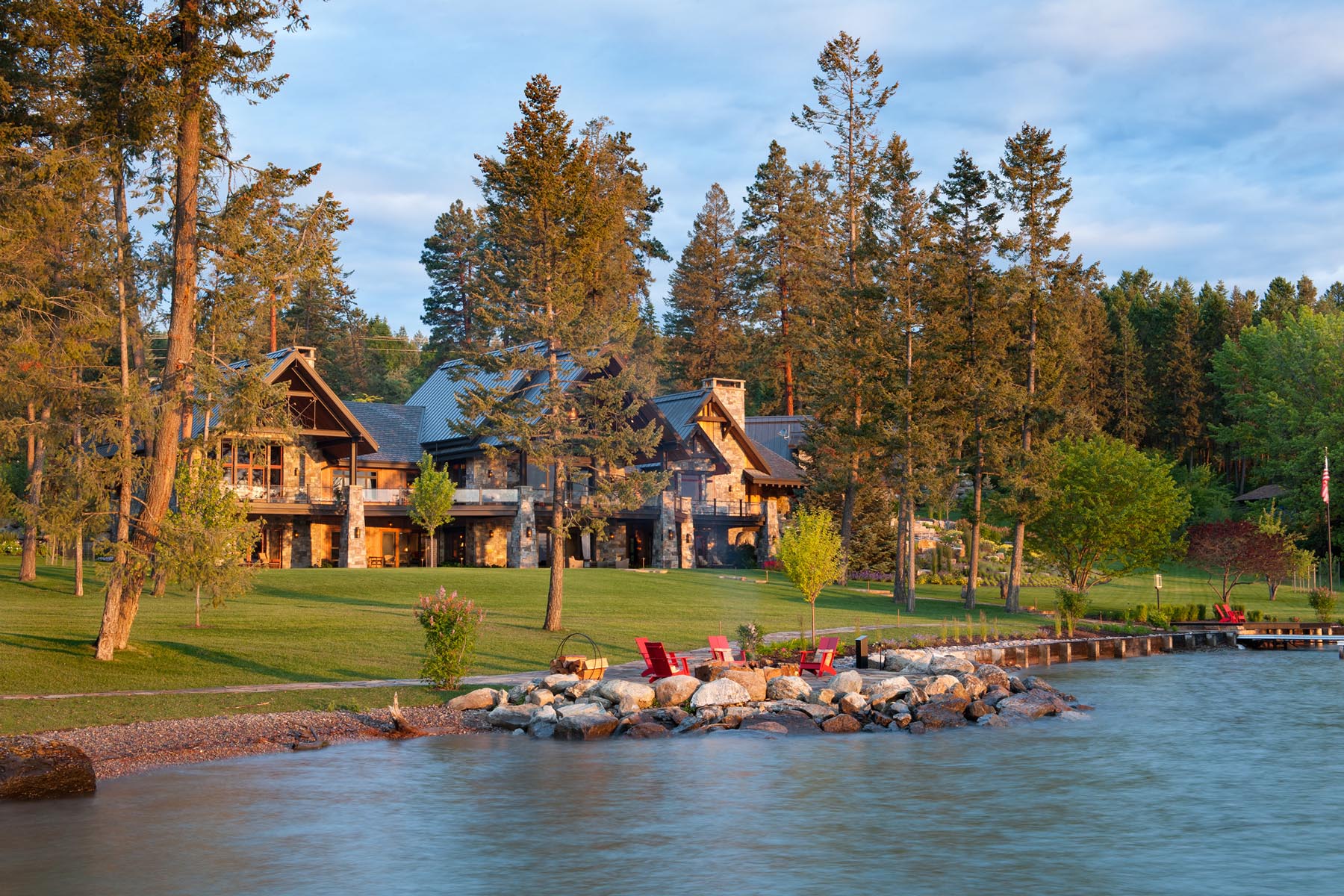 OUTSIDE THE REALM OF MUSIC, it’s not often that creating art is a truly collaborative experience. But, for Orlan Sorensen of Landmark Builders in Whitefish, Sue White of White Design in Corona del Mar, California, and the homeowner, designing this dream home on the shores of Flathead Lake was a fruitful group endeavor from day one.

“The best part of this particular job,” said White, “was working with everyone — the client, the contractor, and his artisan crews. In truth, we were sad to see it end, but thrilled to have the owner relax by his fire pit at the lake’s edge.

“After having worked with this client for over 24 years,” continued White, “I had an understanding of his needs and wants. There was also a shared level of trust and respect between us all that paved the way for a great result. From a design standpoint, we brought some contemporary mountain elements into the mix: exposed steel I-beams, reclaimed wood floors, lots of local stone and doors made from Oregon cherry growers wood barrels. The client’s love of color and western art brought additional warmth and interest to the overall scheme.”

White made over a dozen trips to Montana during the designing and building of the home. The remainder of the time, when she was in California, Sorensen mailed sample after sample for her to see and comment on.

But long before these details entered the conversation, and before the home was even an idea, there was the land — five gently sloped acres with 550 feet of lakeshore. For the home owner, finding five acres on Flathead Lake, much less in the quaint and picturesque town of Lakeside, was near miraculous. There simply wasn’t that quality or size of property left — most plots were much smaller. After he acquired the land, the next step was to find the right builder that could compliment the property.

“In 2007,” said the owner, “my wife and I visited a good friend of ours on Flathead Lake who was living in a home built by Orlan Sorensen of Landmark builders. The beauty of their home and the lake convinced us we had found the place to build our dream home. Our goal was to build a contemporary Western home, and between the three of us, we succeeded. The property and area bring us the beauty and calm of the lake and the excitement of Montana.”

For Sorensen, the designer and builder, the true showcase of the home is the outdoor room — a popular feature in houses today. Not only is this outdoor room a comfortable space with couches and chairs and a TV, but it also sports a massive, poured-concrete bar and grill and a jaw-dropping view of Flathead Lake and the Swan Range.

“It’s a real entertaining area,” said Sorensen. “There can be people mingling in the kitchen, relaxing in the great room, and then with the lift and slide doors, you have this whole other area outside. So, it’s not all one big room, but parceled out, and each space is a very functional area. The shape outside is unique, too – a sort of “V”. This gives the area more of a dimension, and partially encloses the couch and TV spot, too. Plus, most outdoor rooms are on decks. This is a patio that naturally falls off to the garden and then to the lake — fitting with the landscape.”

The exact design of the outdoor room came in a slightly serendipitous manner for Sorensen, while pondering how to attach the garage to the house.

“I wanted the garage turned, so that it wasn’t visible from the front. But, in trying to connect the large, main body of the home with the smaller garage, I needed the roof to join them — so that the garage wouldn’t look dimensionally small. Since I carried the tall and large-mass roof farther, the pitch of the roof continued out and thus created the outdoor room.”

Perhaps the single most unique feature, however, is the “landslide” fireplace, designed at the request of the homeowner’s wife. It is a two-story mosaic of local rocks fitted together like a massive, falling puzzle. The stones jut out three-dimensionally, too, helping create an illusion of instability.

“We first put it together on the hillside …,” said Sorensen, “then took a picture, brought it in and put it back together. Using steel straps that were Para bolted into the block work behind and two chains with hoists to hold the rocks, stone mason Doug Eckerson drilled into the stone and used epoxy to hold them in place. The whole process took five weeks, from beginning to end.”

The fireplace is only one testimony to Sorensen and White’s commitment to detail and fit. Other examples include the glass, corner windows which Sorensen had custom cut at 45-degree angles; the massive, single slab of stone outside the main entry; and the small cherry orchard on the north side of the home. Keeping the old-growth Ponderosa pines that are scattered about the property helped retain the natural integrity of the landscape, too.

“It was three years from breaking dirt to hanging towels in the guest bathroom,” said White. “And a satisfying collective effort on all parts.” 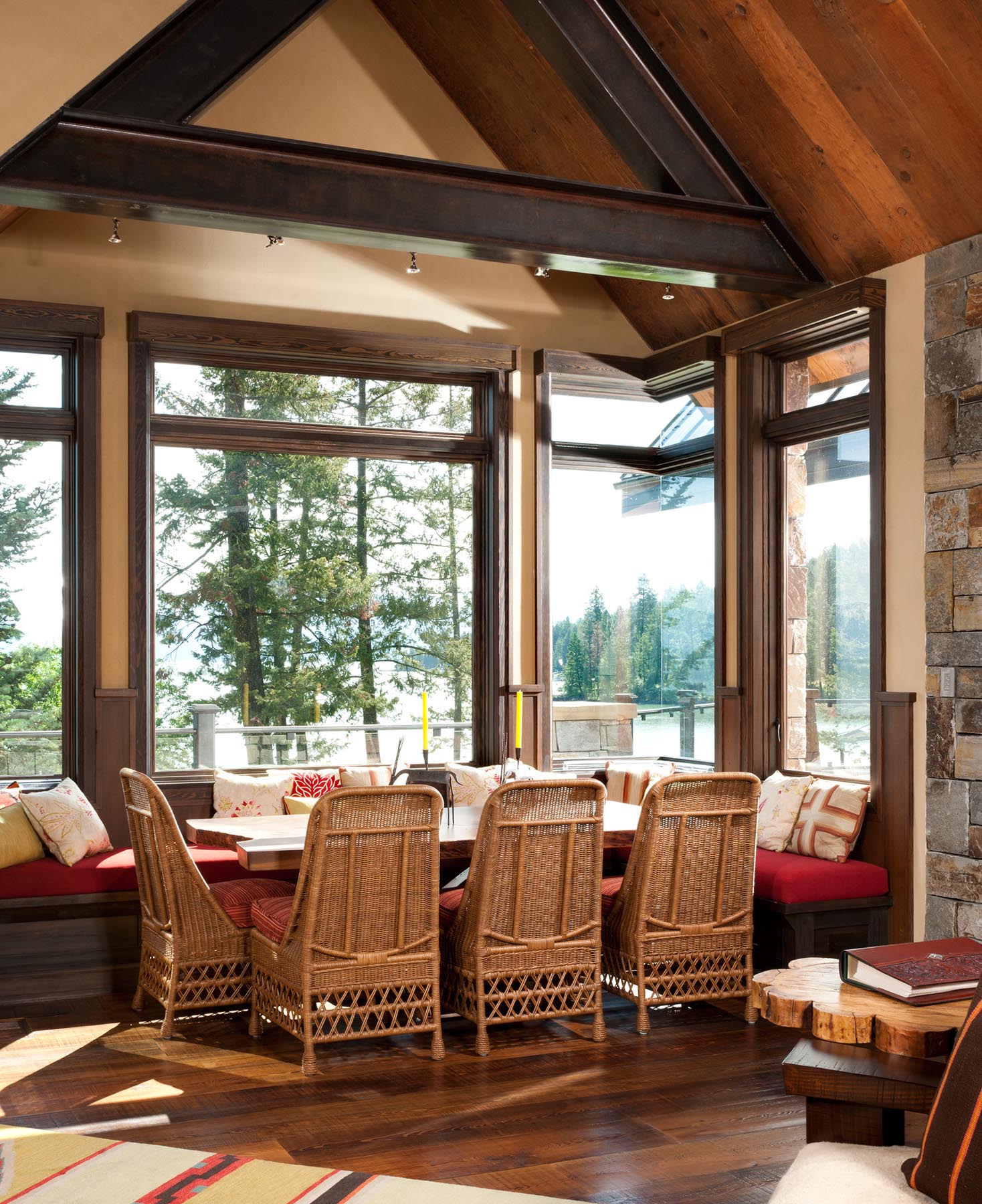 45-degree glass seams on the windows display the true craftsmanship of Landmark Builders. 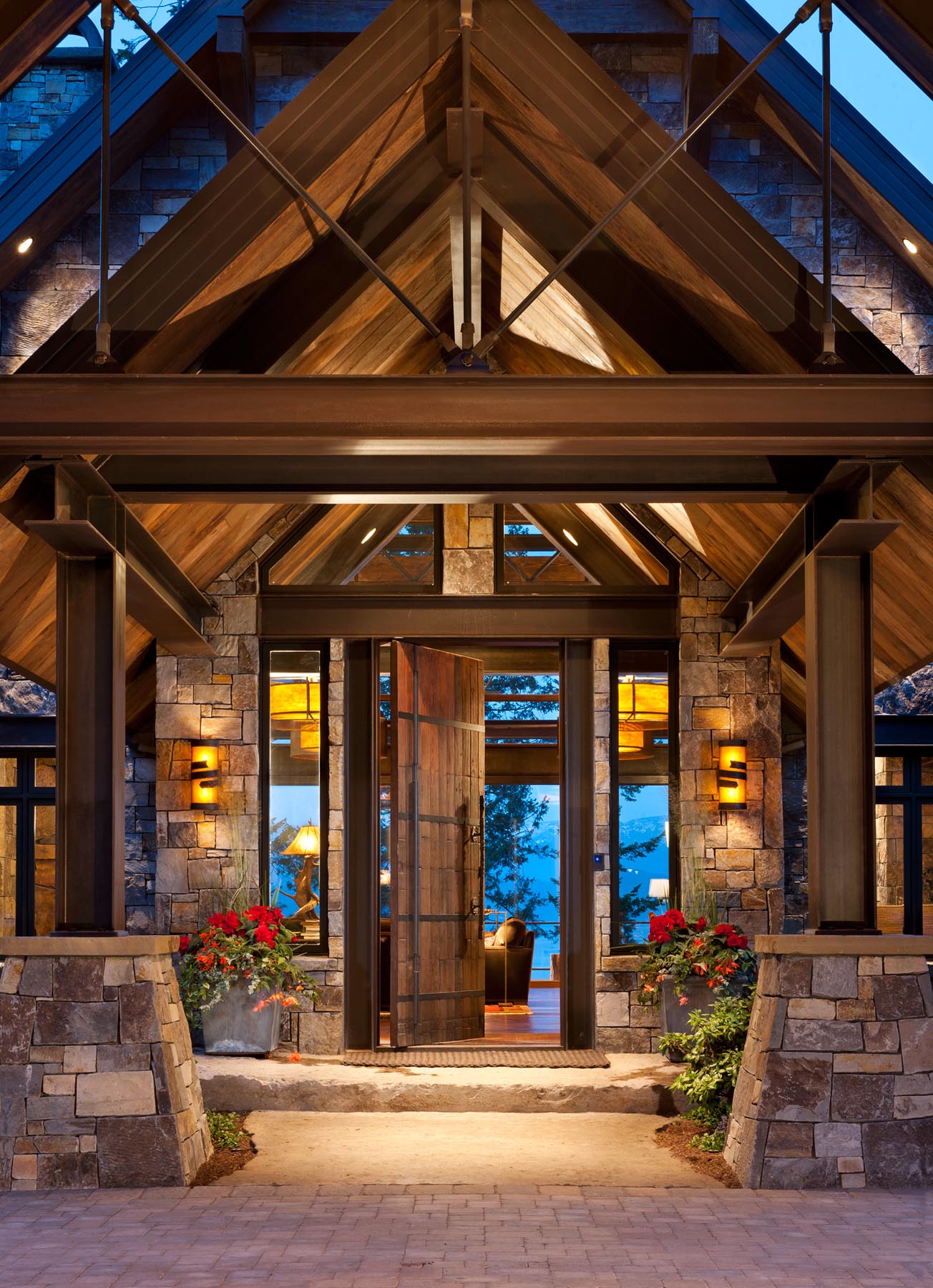 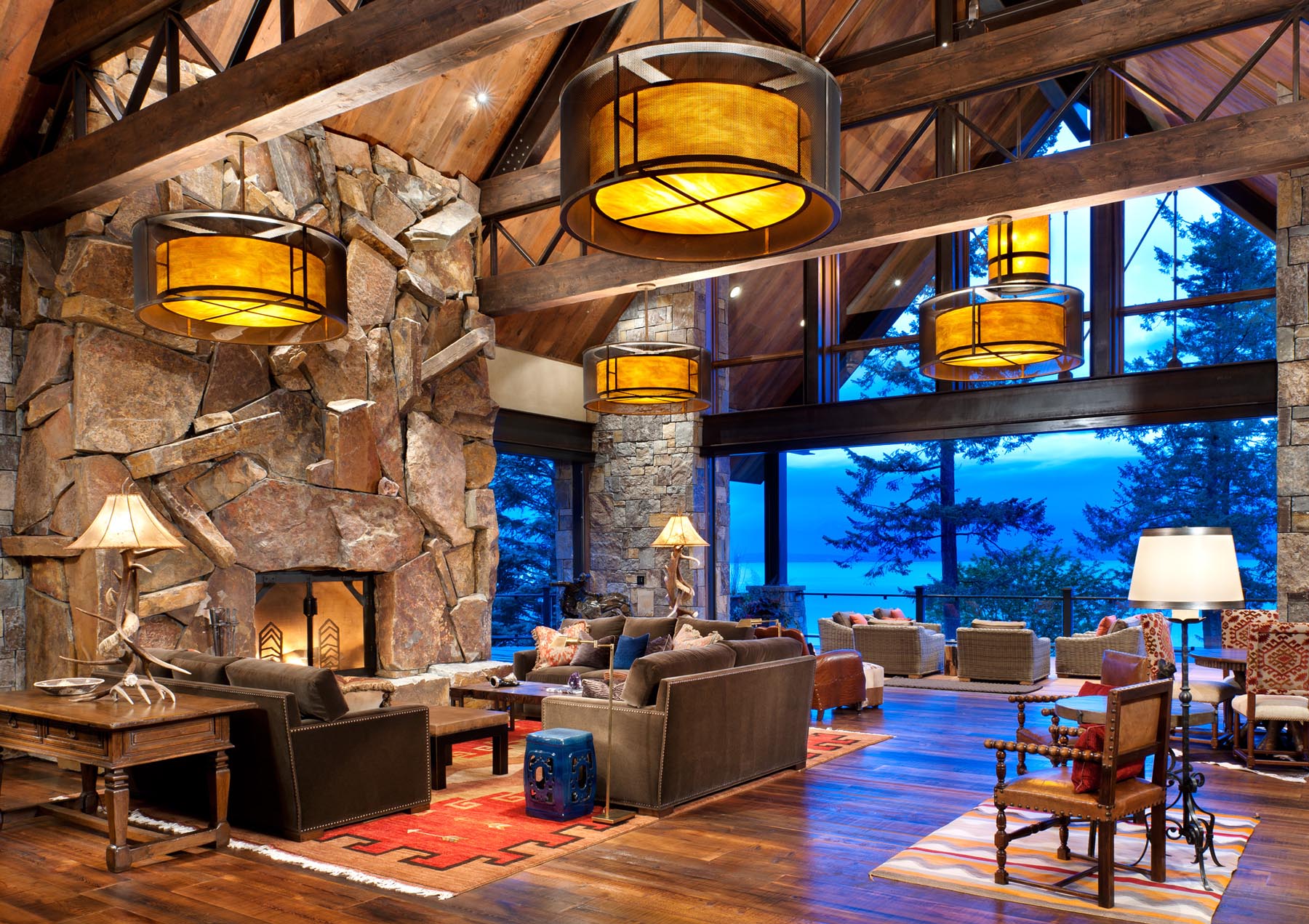 The “landslide” fireplace is a true, collaborative work of art, creating the illusion of motion. 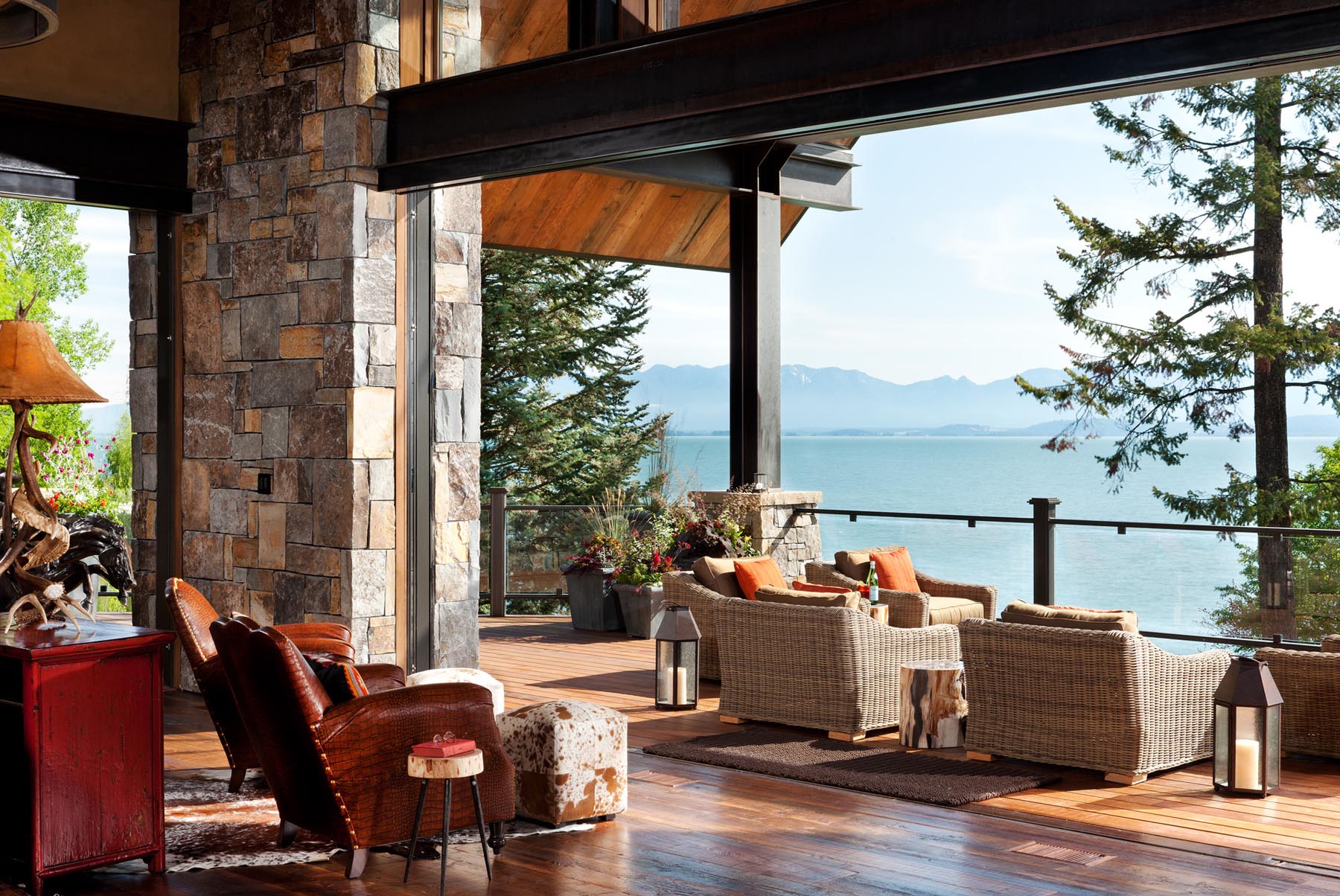 Lift and slide doors connect the great room to the deck, patio and world-class scenery beyond. 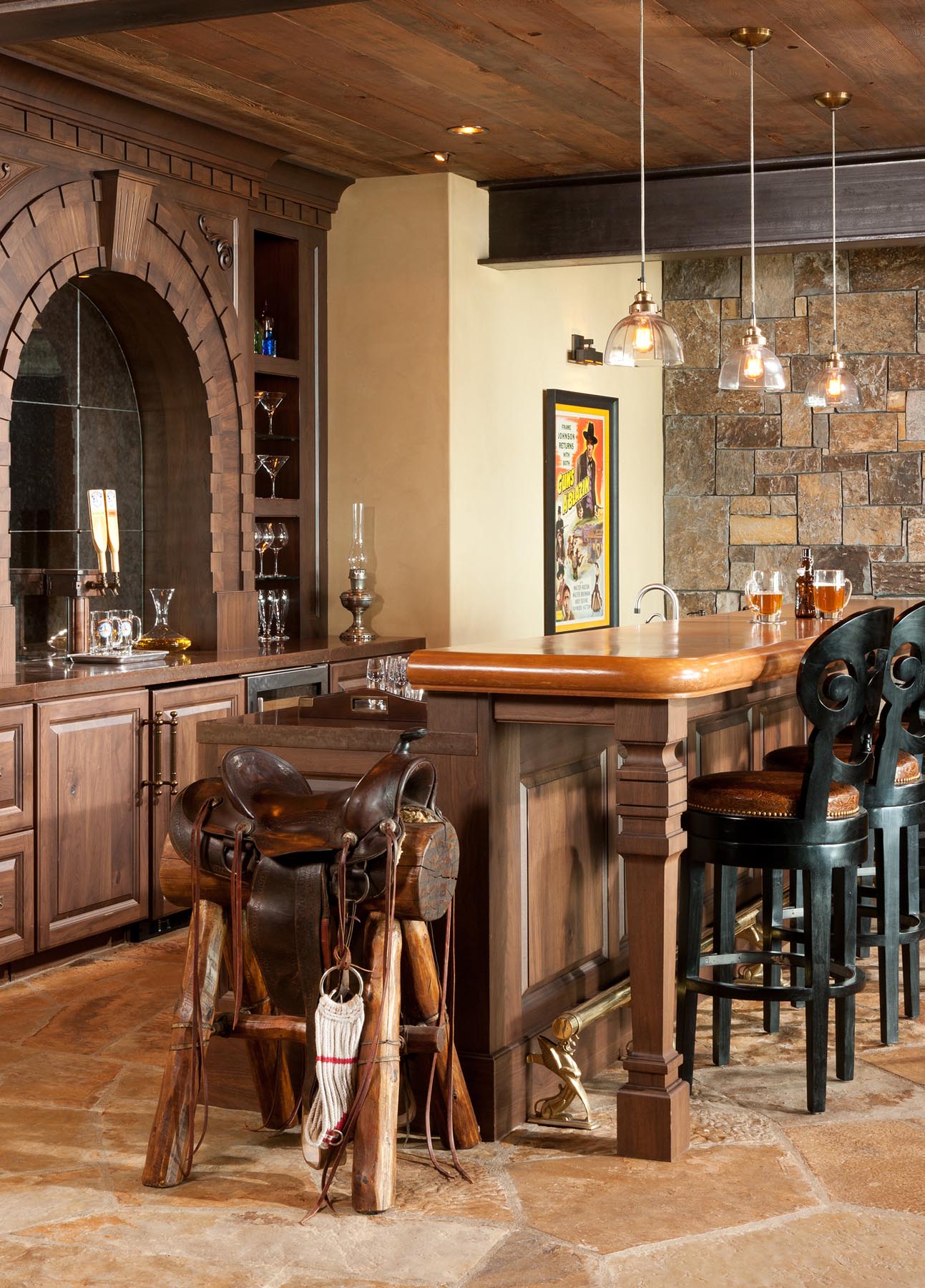 Local stone floors mixed with exposed I-beams creates a rustic, yet clean finish in the downstairs. 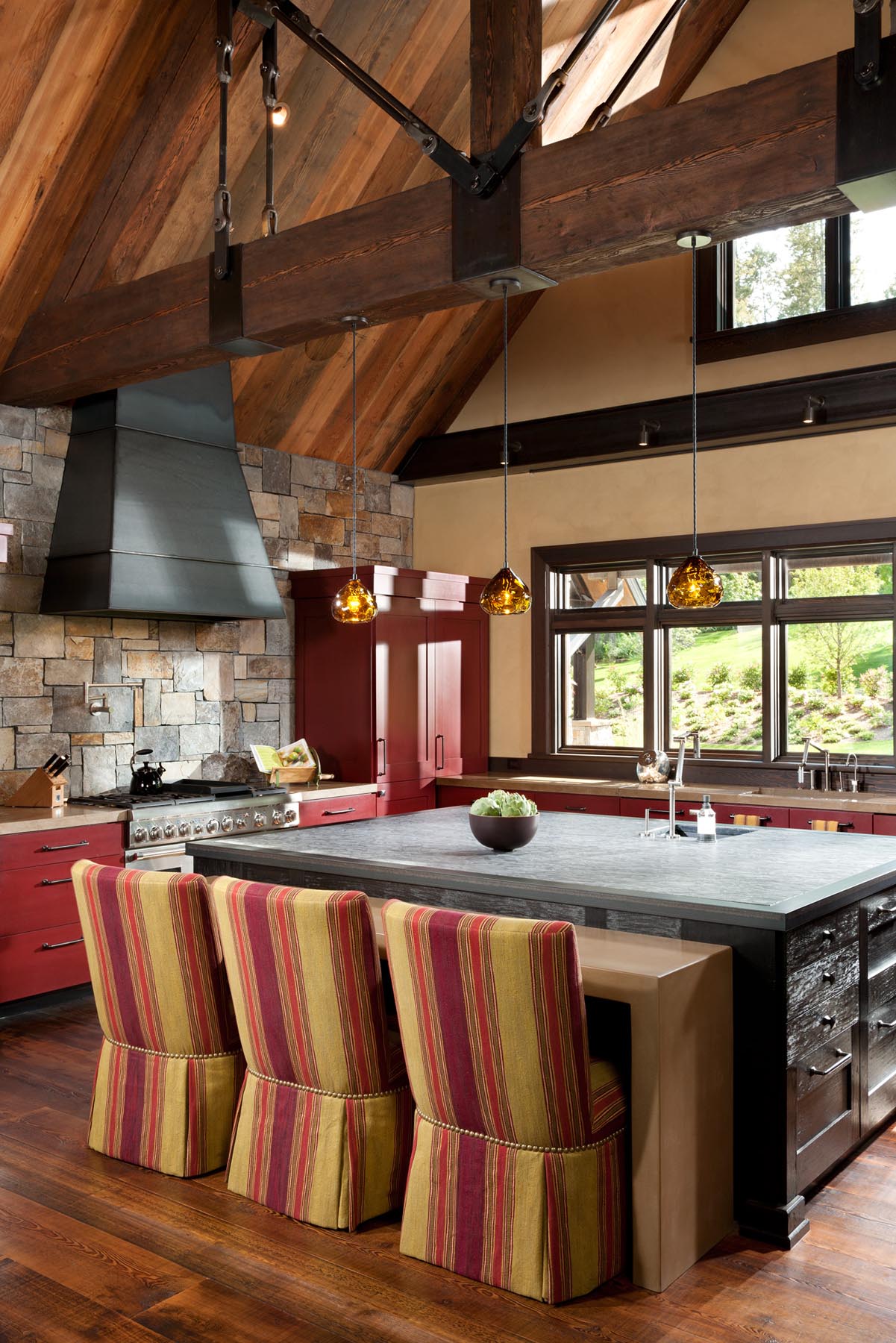 A poured concrete eating table in the kitchen matches the exterior bar in the outside room. 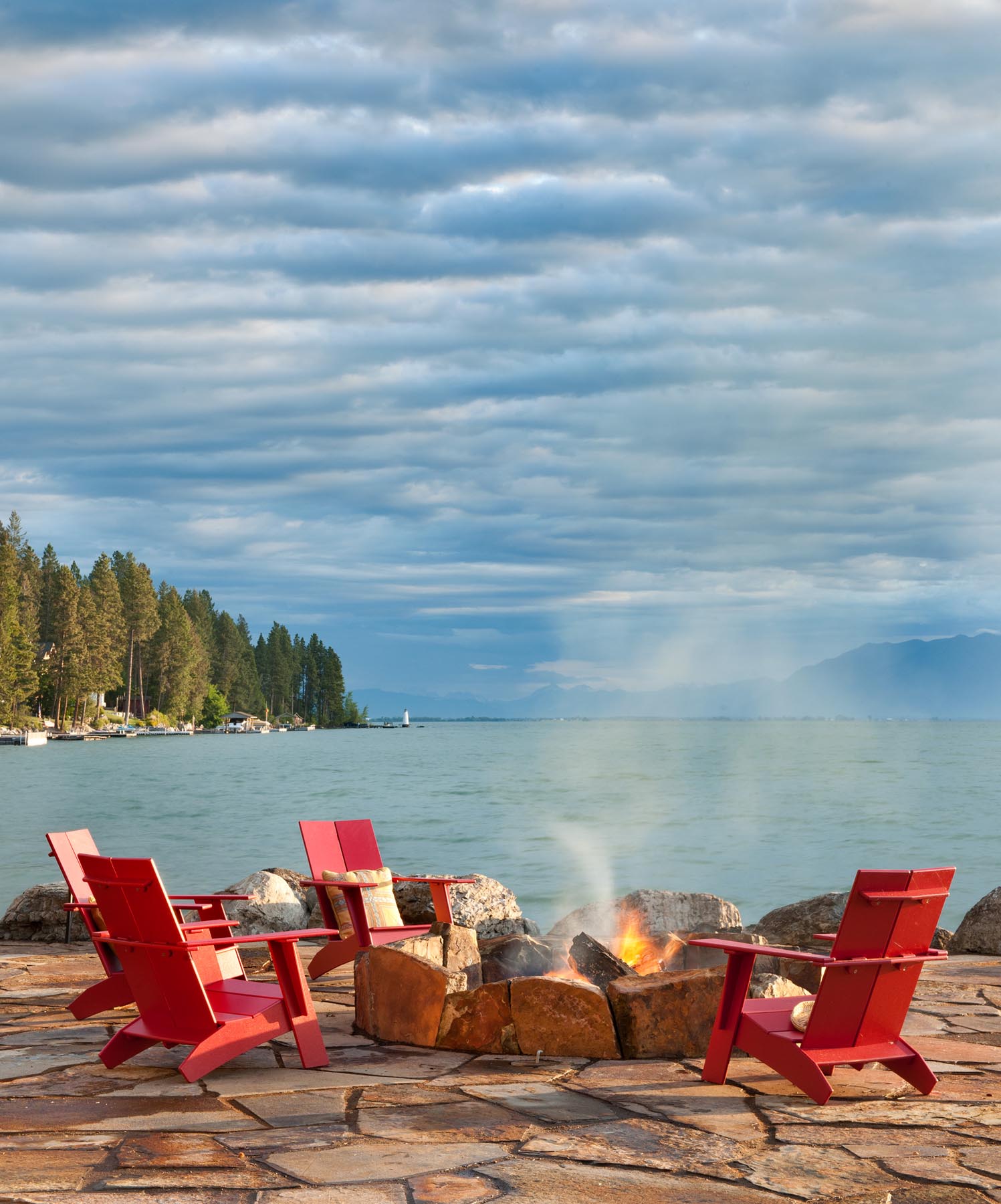 The Swan Mountains and Flathead Lake make for a stunning view from the fire pit.