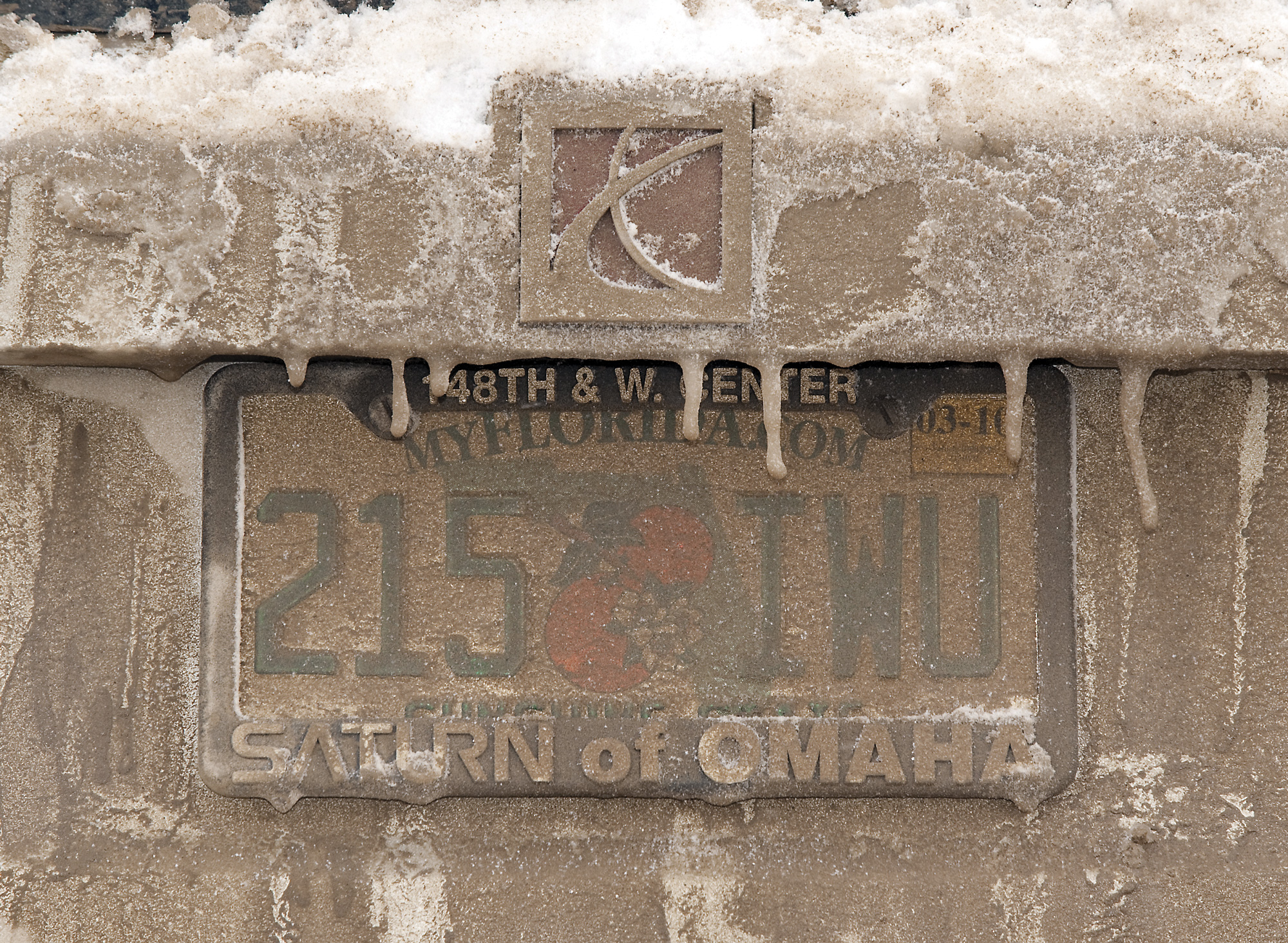 I met Mike Robb on a slow train in northern Manitoba. The train averaged about 15 mph. Butterflies flew past faster than we clicked along. He kept peering out at landmarks, checking his maps. He gave me his AAA business card. His job title reads, Road Reporter. The train trip was his idea of a holiday.

When I told him we were from Bozeman, you could see him go into mental Triptik mode. “Okay,” he said, “Regina, then south. Sidney, Glendive, Terry, Miles City, Billings, Big Timber. Correct me if I’m wrong, but it’s 140 miles from Billings to Bozeman.”

Robb spends plenty of time on pavement, but he specializes in less-traveled routes. I’ve been on a lot of back roads, but I couldn’t stump him. Ice roads on Lake Athabasca. Dirt roads above the Arctic Circle in the Yukon Territory. Roads you have to take a train to in Labrador and northern Quebec. Little spurs in Montana like the dirt strip up Bridger Creek over to the Stillwater Valley or the road south from Ekalaka. Not only did he know them. He knew how many clicks it was between gas stations, where the bridge or lane-widening project was going in, when it was scheduled for completion, and how much it would cost.

The only places I could catch him were wilderness locations without road access. “Cree Lake,” he said, drumming his fingers on the seat rest. “I’ve heard of it, but I can’t place it … ” And you could tell it bugged him, that as soon as he could, he’d pin it down on the map and lodge it indelibly in the cerebral files.

I told him to get in touch if he came through Bozeman. His mental wheels turned, putting together quadrants of country, roads on the list, the best driving months. “I have to get to Alaska,” he said. “Gotta check out a bunch of GFLs. Maybe after that.”

“Yeah, you know, gas, food, lodging. They change all the time up north.”

More than a year later, just this October, I get an email. I’m in Montana, it says. I want to drive some roads around Bozeman. Can we meet for breakfast?

It’s snowing when we do. A September of unseasonable warmth has just gone off the cliff into record low temperatures and snow on the ground.

“Usually you can count on October,” Robb says, over coffee. “Spring thaw and winter freeze-up are the toughest times, but this is pretty rough.”

He drives a Saturn VUE with 130,000 miles on the odometer. His last Saturn went 700,000 miles on two engines. The rig is packed halfway up the windows with his clothes, camera, survival gear, office supplies. His car holds everything he needs for months on end, including matches, a pickaxe, toilet paper and candles. I have to clear the front seat of maps and a rubber tote full of papers, and then squeeze in alongside the desk he has had customized to fit between seats. A lined yellow pad is clipped to the desk and a penholder is close at hand. The top of each page is headed with sequential location information. Driving out of the lot, Robb notes time, location, mileage, makes shorthand symbols to remember intersections and the angles of roads.

We head west in hopes of drier weather toward Three Forks. Robb wants to drive some roads around the Missouri headwaters and along the Madison River by Buffalo Jump State Park.

On the ice-coated interstate he settles down at 45 mph. “I just put new Michelins on, but you never know,” he says.

In 12 years as a Road Reporter, racking up roughly a million miles, he hasn’t had a single fender-bender. “I rear-ended someone in Omaha when I was 18,” he recalls. More than that, he has hardly gotten himself stranded. He remembers a mud bog in northern Saskatchewan that he got mired in and had to hike five miles to call for a tow. The day before, on his way to Montana, checking out some dirt roads in Wyoming, he had to turn around in slimy gumbo and “fishtail back out three or four miles.”

“I fell in love with maps, and with roads, when I was a kid,” he tells me. “My dad sold grain equipment around the Midwest. I was the only one who wanted to go along. Illinois, Minnesota, the Dakotas, up into Canada. I loved putting the geography together. I spent my paper-route money on atlases, read maps more than books.”

Robb was looking for a job as a long-haul trucker when he saw an ad for an AAA position. He started out researching travel itineraries, putting together customized Triptiks for AAA members, but he ached for the road. When the Road Reporter position came along, Robb jumped at it.

At one point there were as many as six reporters working the highways of North America. AAA prided itself on actually driving and documenting conditions at every controlled intersection in the country each year. Another crew handled the rating of hotels and restaurants. With the advent of computers and GIS, the job evolved more and more into adding to geographic databanks, writing travel blogs and updating information on everything from interstates to ice roads. As years passed the ranks of road reporters dwindled. Now Robb is the final one.

“I’ve just been notified that my job terminates after December,” he says, as we take the Logan exit and he jots the mileage on his log. “I’ll have to freelance after that. Maybe I’ll have to start camping.”

I can feel Robb perk up as soon as we cross the Gallatin River and strike dirt. He makes notes, scans the terrain. The snow has stopped, the ground is mostly clear, some spots of sun warm the landscape. A herd of pronghorn stands in a field, watching Mike’s Saturn slide past. At every intersection Robb notes the road names, scribbles hieroglyphics in the margins. His eyes run across the horizon in search of the distant curve of a roadcut. The Gallatin writhes through the valley toward the Missouri.

Much as Robb wakens to landscape, he is not the outdoorsy type. He is a connoisseur of motels. He likes one-story buildings with parking at the door. “I don’t like anyone above me,” he says. He requires Fox News, the History Channel and ESPN on cable. He needs wireless Internet access so that he can type up his daily road blog and handle his business. In his car/office he has satellite radio, listens to sports shows, football games, talk radio.

“I hardly ever go to restaurants,” he says. “It’s too boring when you’re alone.”

Mostly he eats at Subways, and he claims to have frequented more than 2,000 of them. He also has found his way to 475 Hooters on his travels. And Gold’s Gyms; he has worked out in scores of Gold’s. Despite his sedentary life, Robb, in his late 40s, is trim and fit; hardly the overweight, bad posture caricature of the long-distance driver.

In the few stationary periods during the year, usually during the spring and early winter when roads are in the worst shape, Robb stays with his parents and a brother in Omaha. He has no permanent address, no long-term relationships, none of the community associations most people strive for. If it ever comes to settling down, however, he certainly can claim to have scoped out the possibilities.

“Actually, Montana ranks pretty high on the list,” he says. “If I had to land somewhere, it would be somewhere with this kind of space.” And maybe a Gold’s Gym or two.

Late in the morning we drive up the dirt roads of the Madison River valley. An occasional pickup truck rumbles by. Robb raises a finger off the steering wheel in acknowledgement. Snow and rain spit on the windshield. Robb stops to wipe the wipers free of ice. The rock scarp that facilitated buffalo slaughter in an earlier era etches its outline against the overcast. The sense of transition, the end of this era, hangs in the car like smoke.

Robb has no intention of changing his occupation. He talks about the vicissitudes of freelancing, how he’ll have to adjust to a more austere regimen, but not about a Plan B.

By the time we complete the loop back to town it is still early in the day. Robb is satisfied to have checked a few more back roads off the list, and he will blog about them from his motel room later on. He has time for a long workout at Gold’s before grabbing a Subway.

“I’m thinking I’ll head north on some back roads near White Sulphur Springs tomorrow, then work toward North Dakota. I’ll get a new windshield in Minot before checking some GFLs in Canada. It’s my third windshield of the year,” he says.

We shake hands. Before I step out of his Saturn Robb has the radio on. He idles next to the curb. When I glance back he is bent forward over his small desk. Then the brake lights go off, the blinker flashes, and he carefully pulls into traffic. 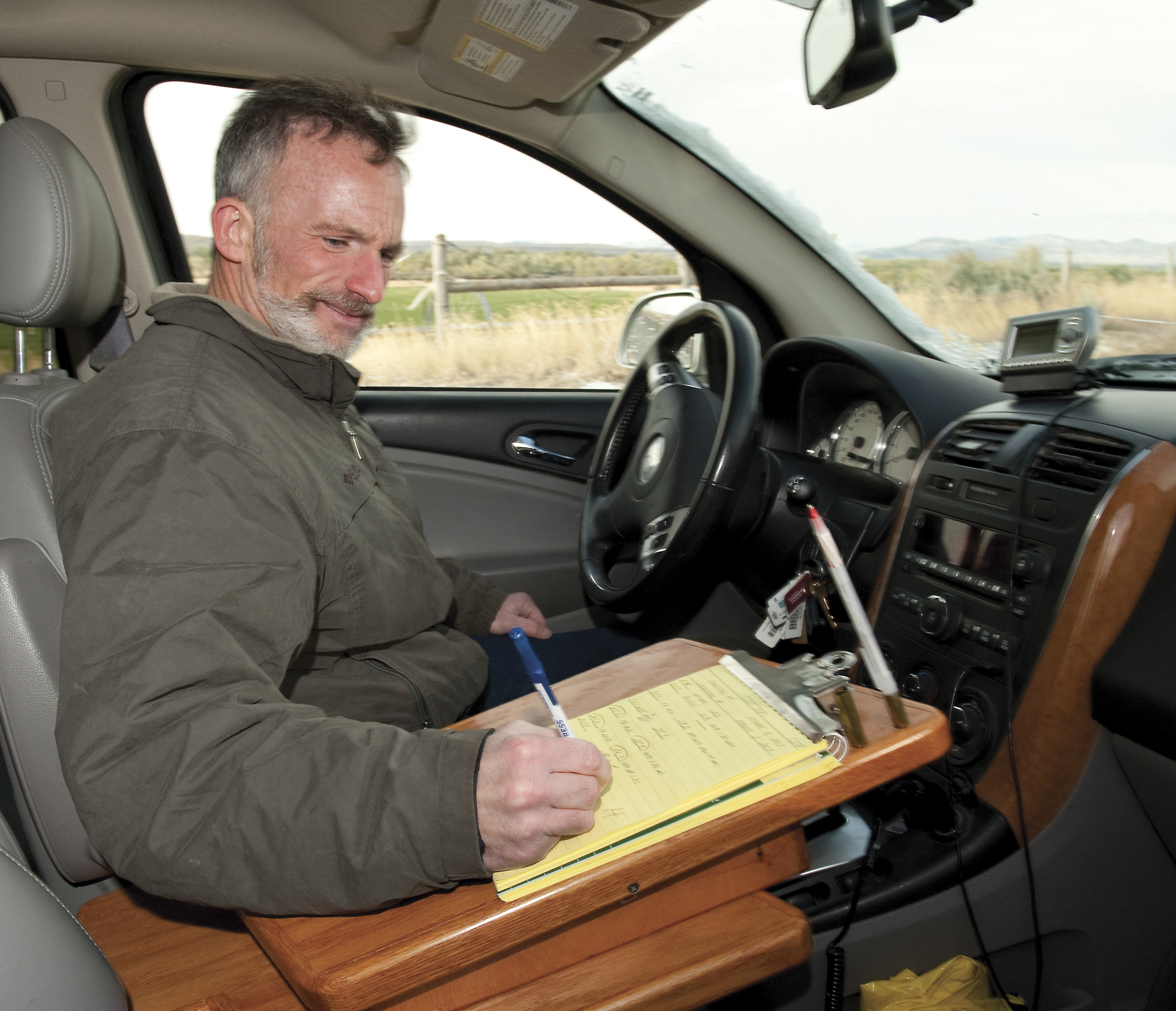 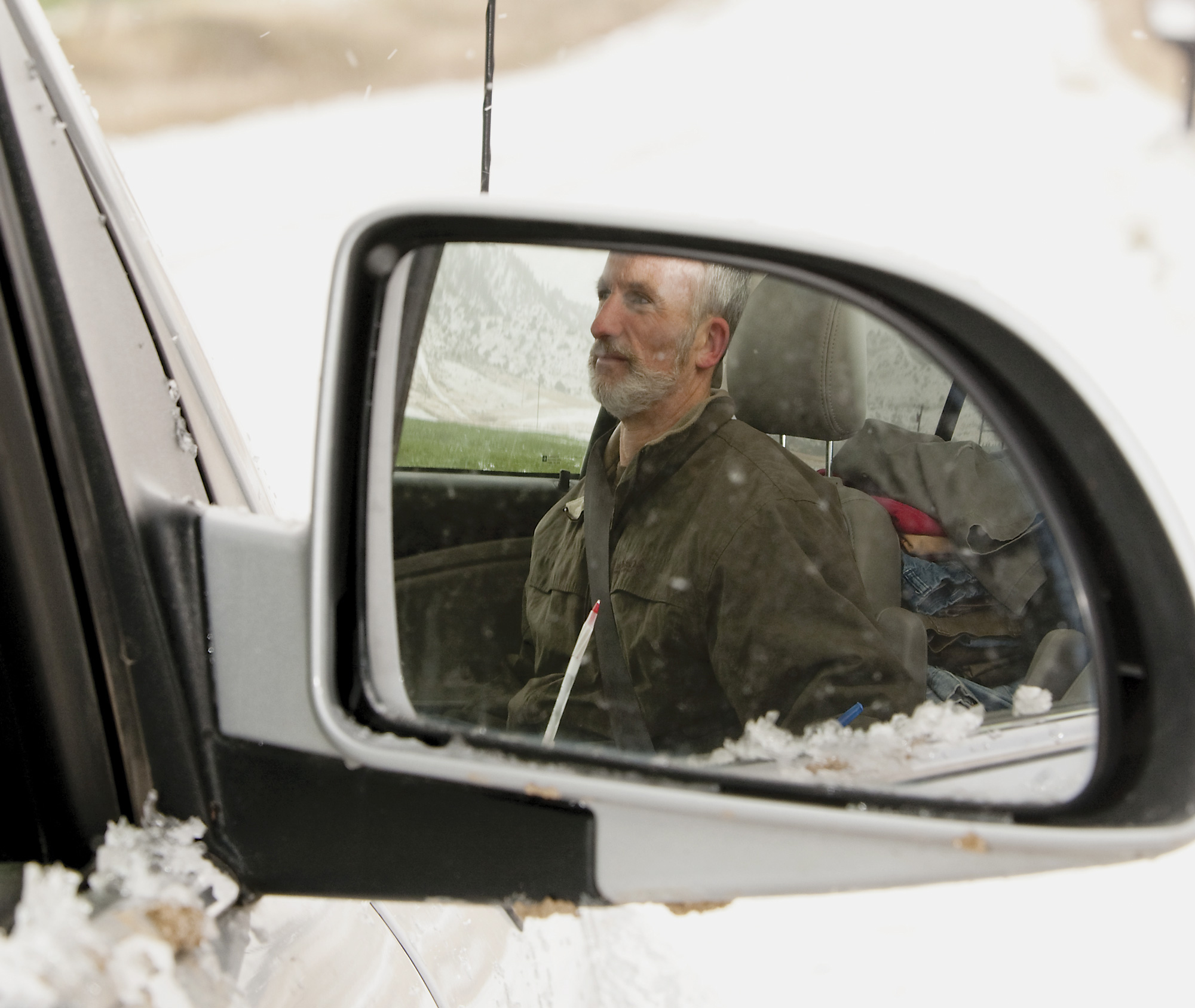 By his estimate, Robb has seen nearly a million miles foll away in the rear view mirror. Photo by Ryan Turner 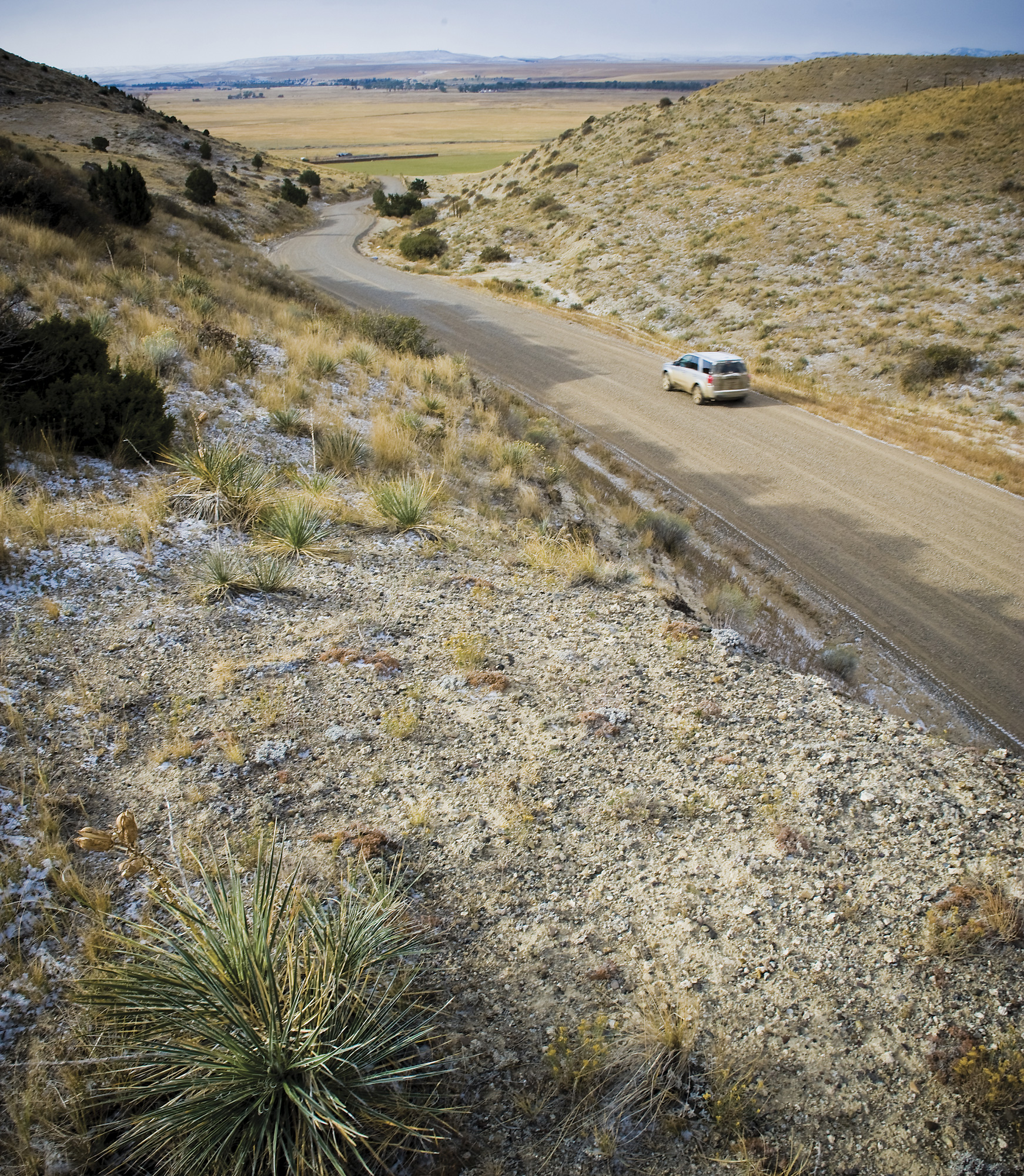