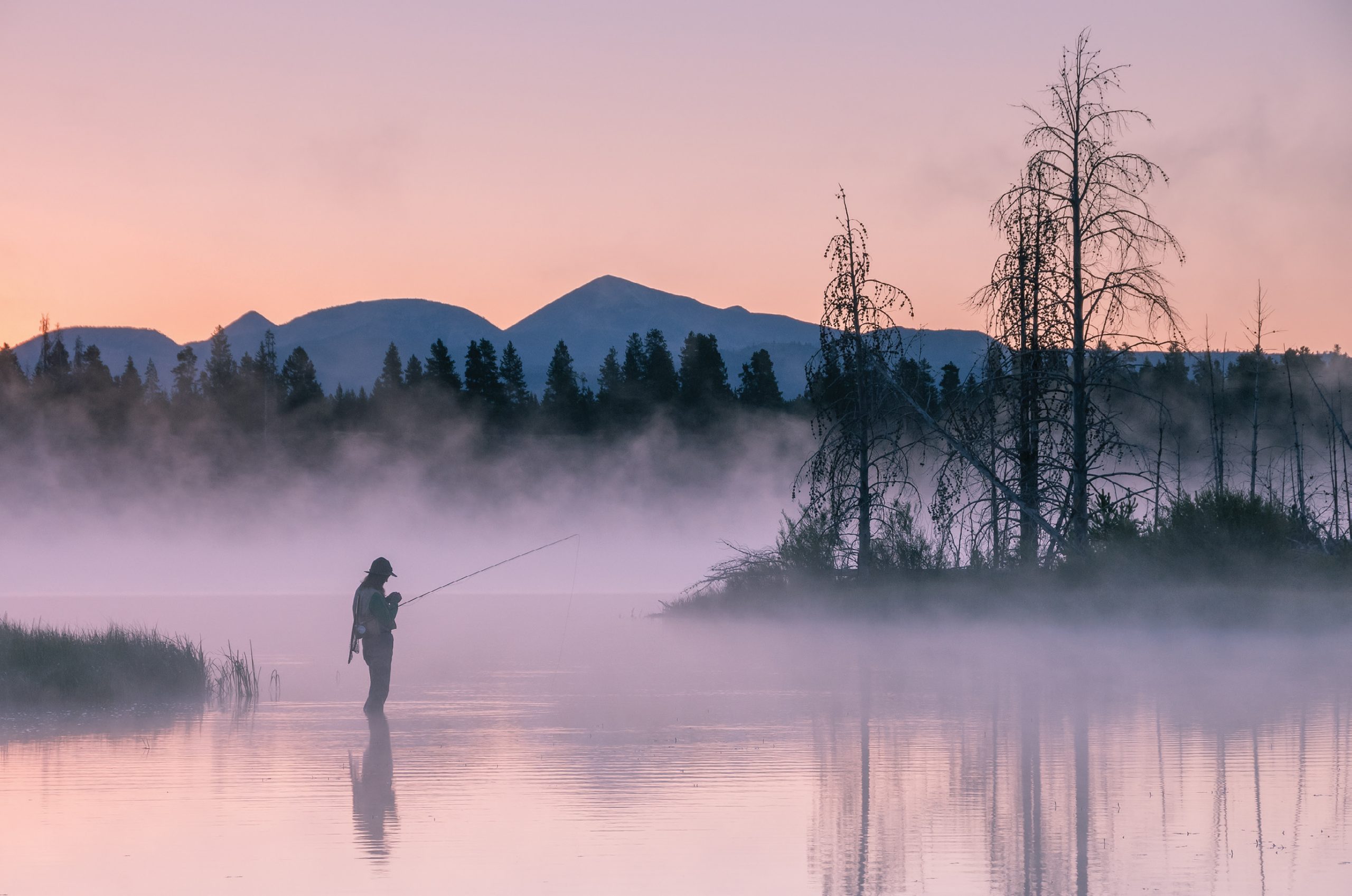 At the mouth of the Madison River in Southwest Montana, around 5:15 a.m., Emily Gribble chooses a fly for the morning rise. “In this one, I love the color in the sky, the fog, and the water,” Juracek says. “I also love the graphic outline and arrangement of the mountains, the dead trees, the lone angler, and the sense of peace this image evokes.”

“My favorite time of day to take photos is in the morning,” says West Yellowstone, Montana-based fly fisherman and photographer John Juracek, “which generally means a half hour or so before sunrise and continuing for an hour or so after sunrise. This can vary, of course, depending on the light and cloud conditions, but there’s typically a softer quality of light in the morning compared to other times of the day.” 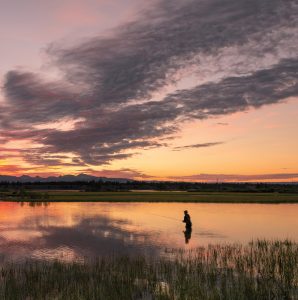 On a midsummer morning, at the beginning of the day’s Trico fly emergence, angler Emily Gribble searches for rising trout in Hebgen Lake, near West Yellowstone, Montana. “I like the colors in the clouds and sky and the uninterrupted silhouette of the angler,” fly-fishing photographer John Juracek says. “And I like the idea of a lone angler engaged in nature at a beautiful time of day.”

Juracek became enamored with fly fishing while growing up in the Midwest, and he picked up his first fly rod in 1969 when, he says, “bamboo and fiberglass still battled it out as the material of choice for rods.” After earning a fisheries biology degree from the University of Wyoming, he worked for the Wyoming Game and Fish Department before putting roots down in West Yellowstone, where he co-owned the shop Blue Ribbon Flies for more than 20 years. 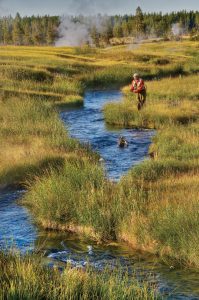 On a September morning, around 8 a.m., fellow photographer Ken Takata fishes a side channel of the Firehole River in Yellowstone National Park. “I like the shape of the river and how the colors — blue, red, green, and yellow — work together,” Juracek says. “And I like how the angular light rakes the scene, emphasizing the shapes and textures in the photo.”

Along the way, Juracek became fascinated with photography, eventually blending his two passions and having his work published in a variety of mediums, including magazines, catalogs, calendars, and websites. These days, he spends most of his time fishing, photographing, teaching fly casting, and tying flies commercially. 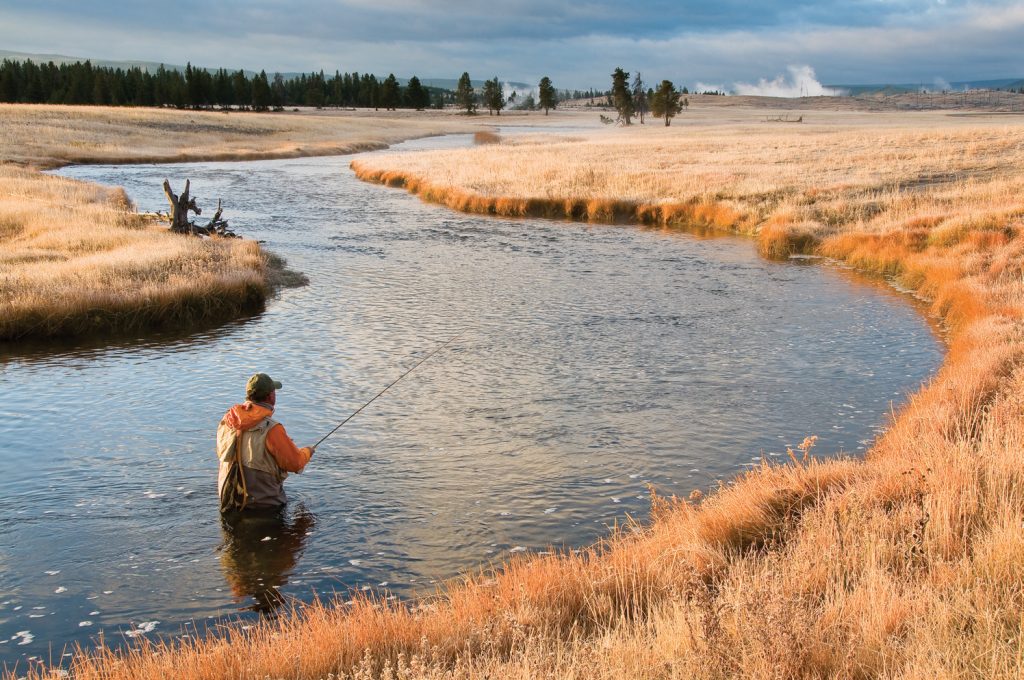 In early October, at approximately 7:45 a.m., Dave Pearson explores the lower reaches of Nez Perce Creek in Yellowstone National Park. “I love the warm, orangish sunrise light, and how it works with the angler’s orange jacket,” Juracek says. “I also like the shape of the river, and how the warm light contrasts with the cool light of the heavily overcast sky.” 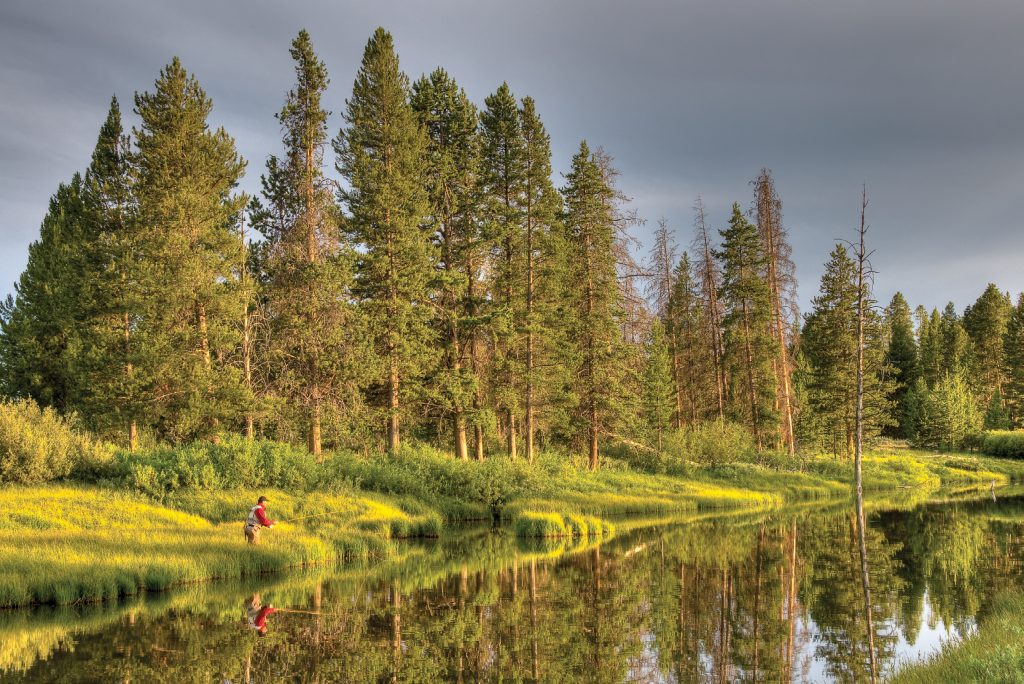 On a July morning, Ken Takata casts to rising trout on the placid waters of Maple Creek, near Missoula, Montana. “I like the scale of the angler in this photo; he’s merely one aspect of the scene, not the dominant element,” Juracek says. “I also like the warm light, how it grazes the scene and emphasizes the colors and textures of the vegetation. It also contrasts with the dark sky, adding a slight feeling of impending gloom.”

Although Juracek takes photos at just about any time of day, many of his favorite images were captured in the “angling light” he prefers during the wee hours. “Dawn provides an entirely fresh start, a new beginning; the world is waking up, and to me, anything seems possible then, especially photographically,” he says. “The peaceful, quiet light that morning offers really resonates with me. It makes it easy to remain open and receptive to whatever suggests itself as a photograph.” 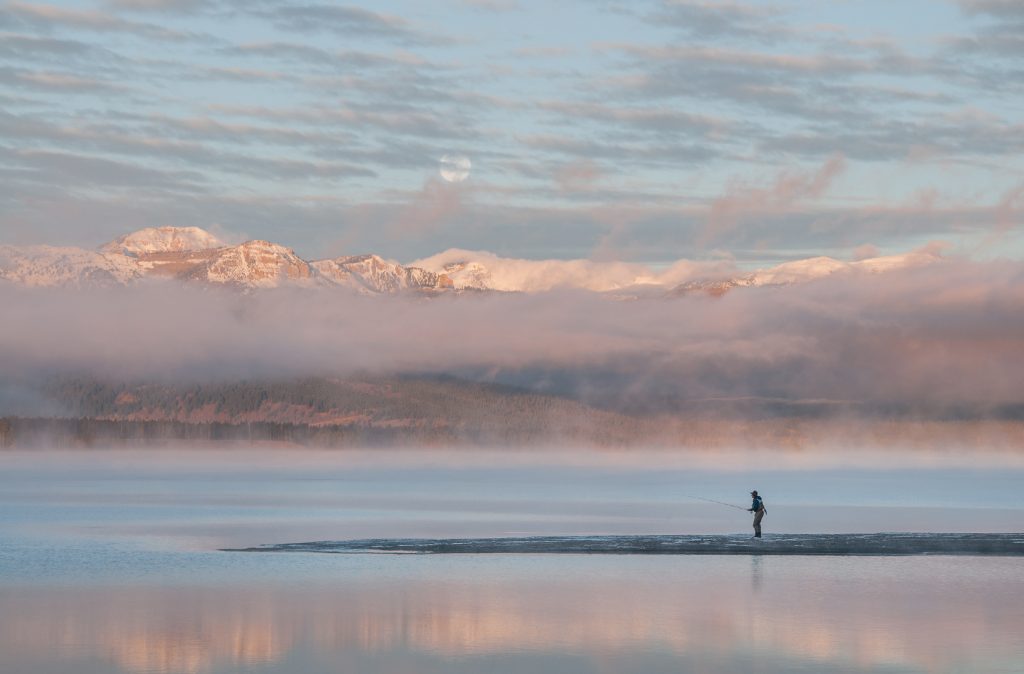 A full moon hovers above Peter Scorzetti as he fishes for brown trout in Hebgen Lake on a mid-October morning. “I love the feelings evoked by a lone angler engaged with nature in a beautiful setting,” Juracek says. “For me, this is a long-running theme; it’s how I see the sport of fly fishing.” 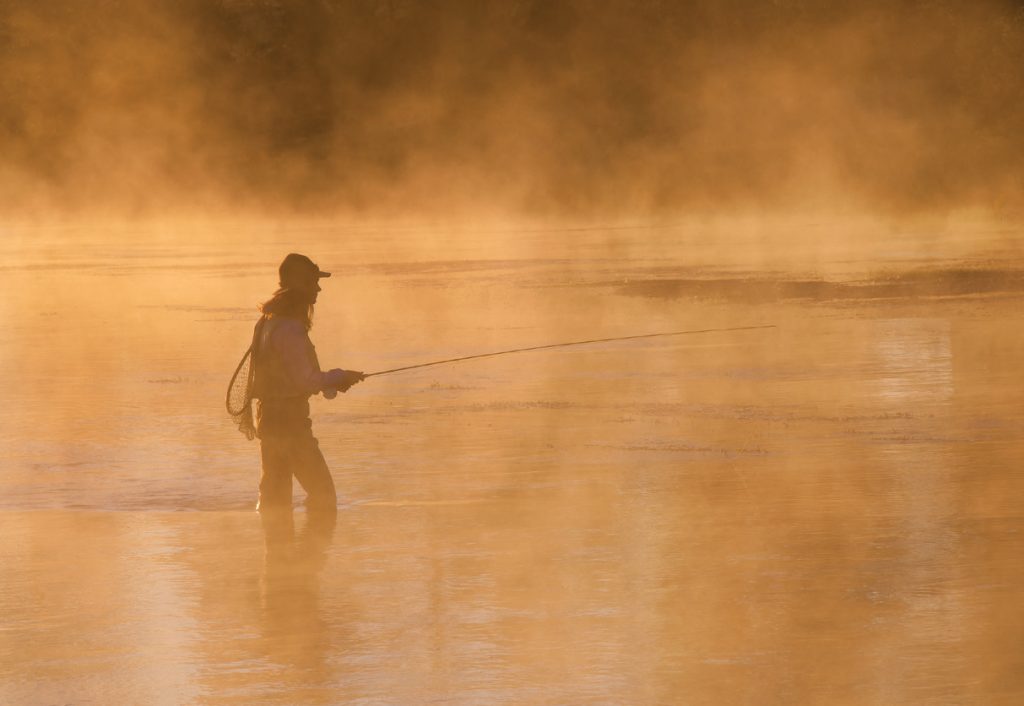 Morning mist envelops Emily Gribble as she fishes Yellowstone’s Firehole River. “I like the ethereal feeling the mist provides and having the scene backlit, which adds color and emphasizes the outline of the angler, her rod, hat, and net,” Juracek says.

Dawn also happens to be Juracek’s preferred time of day to fly fish. “Part of that is because I love the feeling — as with my photography — of the limitless possibilities that a new day suggests,” he says. “Anything can happen, and I want to be there first thing to experience what the world and the fish have to offer up. The fish themselves and their environments are calm, quiet, and undisturbed in the mornings, and I frequently find that amazing things happen then. I also find myself to be more alert, observant, and keenly aware of what’s taking place in the world around me.”