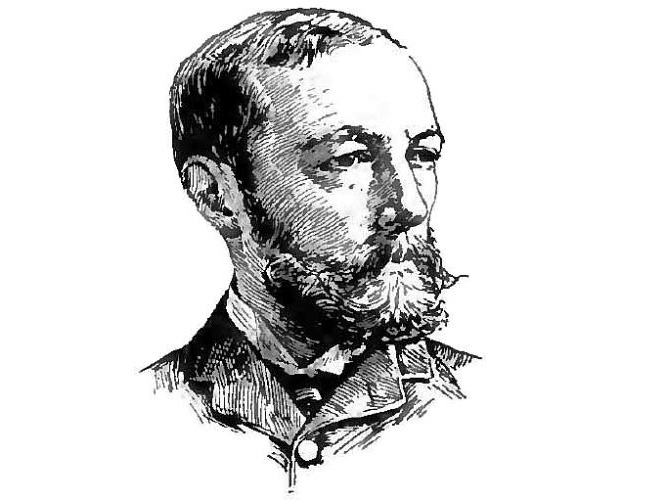 To almost everyone who enters Yellowstone National Park, or even those who just look at a map of it, it must seem puzzling that the park laps over into only a few miles of Montana and Idaho. Why is 1 percent of Yellowstone in Idaho, 3 percent in Montana, and the remaining 96 percent in Wyoming? In the 1880s, a powerful Yellowstone insider explained the anomaly and proposed squaring up the park — but he wanted something in return.

Arnold Hague, the son of a Baptist clergyman and professor from an old New England family, wore a bushy beard below his high forehead and prominent nose. His manner was reserved and gentlemanly, but he was a keen outdoorsman and a wily advocate for the landscapes he loved.
Born in Boston, Massachusetts, in 1840, Hague graduated from Yale, studied geology in Germany, and then began a long career with the U.S. Geological Survey (USGS). Hague examined volcanoes in the Pacific states and Guatemala, and in 1883 was appointed to head USGS efforts to study Yellowstone’s geysers, and especially their relation to ancient volcanoes.

Hague spent seven straight summers in Yellowstone, where his interests grew beyond geology. He loved Yellowstone’s grand and rugged scenery: mountains, sunsets, “sequestered nooks, and enticing grassy parks,” he once wrote. Having frequently followed elk trails in his travels, he believed that the animals had “an appreciation of the picturesque and the grand.”

Later in his career, the USGS would publish his study covering more than 3,000 square miles as a book and atlas titled Geology of the Yellowstone National Park, which is still lauded by geologists as one of the most in-depth Yellowstone studies ever performed.

Hague arrived in Yellowstone amid uncertainty about its borders. In 1882, General Philip Sheridan proposed stretching the 10-year-old park an additional 40 miles east and 10 miles south. The hunter-activist George Bird Grinnell highlighted Sheridan’s plan in his Forest and Stream magazine. And, early in 1883, a Senate bill proposed that extension. It failed to pass, but Hague’s scientific credentials and onsite experience would offer weight when advocates tried again.

The natural wonders, Hague could see, brimmed beyond Yellowstone’s boundaries. For example, his geological studies often took him through the ruggedly beautiful Absaroka Mountains east of the park. He valued the sources of the Yellowstone and Snake rivers south of the park — and noted that since New York state was at that time spending a lot of money to protect clean water in the Adirondacks, in the greater Yellowstone, it would be wise to act before settlers arrived. Hague also talked about the value of game habitat in these unprotected lands. Indeed, for his work on protecting Yellowstone elk, Hague became one of only two non-hunters ever elected as full members of the famed Boone and Crockett Club.

Hague wintered in Washington, D.C., where he networked with insiders. He knew how to compromise to achieve wider objectives. For example, he quickly saw a problem with Sheridan’s boundary-expanding proposal: It would have “locked up” meadows in the Jackson Hole valley that were desirable as private grazing lands. 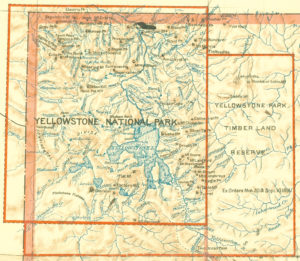 The General Land Office map below shows Yellowstone National Park’s original rectangular boundary. Adjustments were made in 1929 and 1932 leading to today’s boundary.

Along similar lines, Hague could appreciate that when explorer Ferdinand Hayden conceived Yellowstone’s original boundaries in 1871–72, they were rather arbitrary. Hayden wanted to preserve the geysers and other thermal features — of which he knew he’d seen only a portion. So he suggested that the park’s eastern and southern boundaries be set 10 miles beyond the edges of Yellowstone Lake, with a northern boundary at the confluence of the Gardner and Yellowstone rivers. And he suggested a western boundary 10 miles west of Madison Lake.

Seeking a visible reference point near the then-primary entrance to Yellowstone, Hayden either didn’t notice or didn’t care that the Gardner-Yellowstone confluence was less than 3 miles north of the Montana-Wyoming border — and that the Montana territory east of the Yellowstone River had already been dedicated to the Crow Indian Reservation.

Furthermore, later officials didn’t even know what he’d meant by “Madison Lake.” Only when they decided that he was referring to Shoshone Lake could they measure the park’s western boundary — to find that it was less than 3 miles west of Wyoming’s border with Montana and Idaho.
As part of Hague’s effort at compromise, he proposed rationalizing those borders: Square Yellowstone up with the northwest corner of Wyoming, but expand the park at least 30 miles to the east and 6 miles to the south. However, no compromise could make it through Congress. In four consecutive Congressional sessions through the 1880s, railroad lobbies larded the boundary-altering bills with provisions that would allow the construction of a rail line from Gardiner to Cooke City, through Yellowstone’s Lamar Valley. Hague and other Yellowstone defenders believed that such a railroad would defile the meaning of the national park, so they withdrew support for the amended bills, which then died. 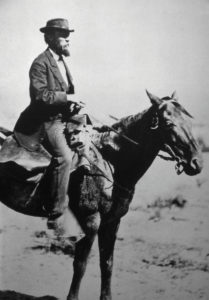 The stalemate continued until 1891 when Hague found another way to achieve his goals. In a perhaps-unnoticed rider to a different bill, Congress allowed the president to set aside “forest reserves.” Hague immediately convinced President Benjamin Harrison to create the Yellowstone Park Timber Land Reserve — using the exact same boundaries he had previously proposed for the park’s expansion. Because Harrison could act unilaterally, no offsetting compromise was needed.

In the coming decades, the forest reserves would expand and evolve into National Forests, a form of government protection of valuable landscapes that differed from national parks. Portions of those forests would eventually be set aside as designated wilderness areas, with more stringent protections.

Today, when we look at the national parks, national forests, and wilderness lines on a map, we are literally tracing changing societal attitudes toward nature. For example, in 1929 and 1932, park-forest land exchanges adjusted Yellowstone’s north and east borders to conform more closely with natural features, such as the headwaters of the Lamar River and the elk winter range west of Gardiner. Hague’s vision of using natural science to alter the park’s arbitrarily rectangular boundaries was realized on a small scale — but with those lands nevertheless still spilling across three states.

A regular contributor to Big Sky Journal, John Clayton is the author of Wonderlandscape: Yellowstone National Park and the Evolution of an American Cultural Icon and Natural Rivals: John Muir, Gifford Pinchot, and the Creation of America’s Public Lands, from which this article is drawn.