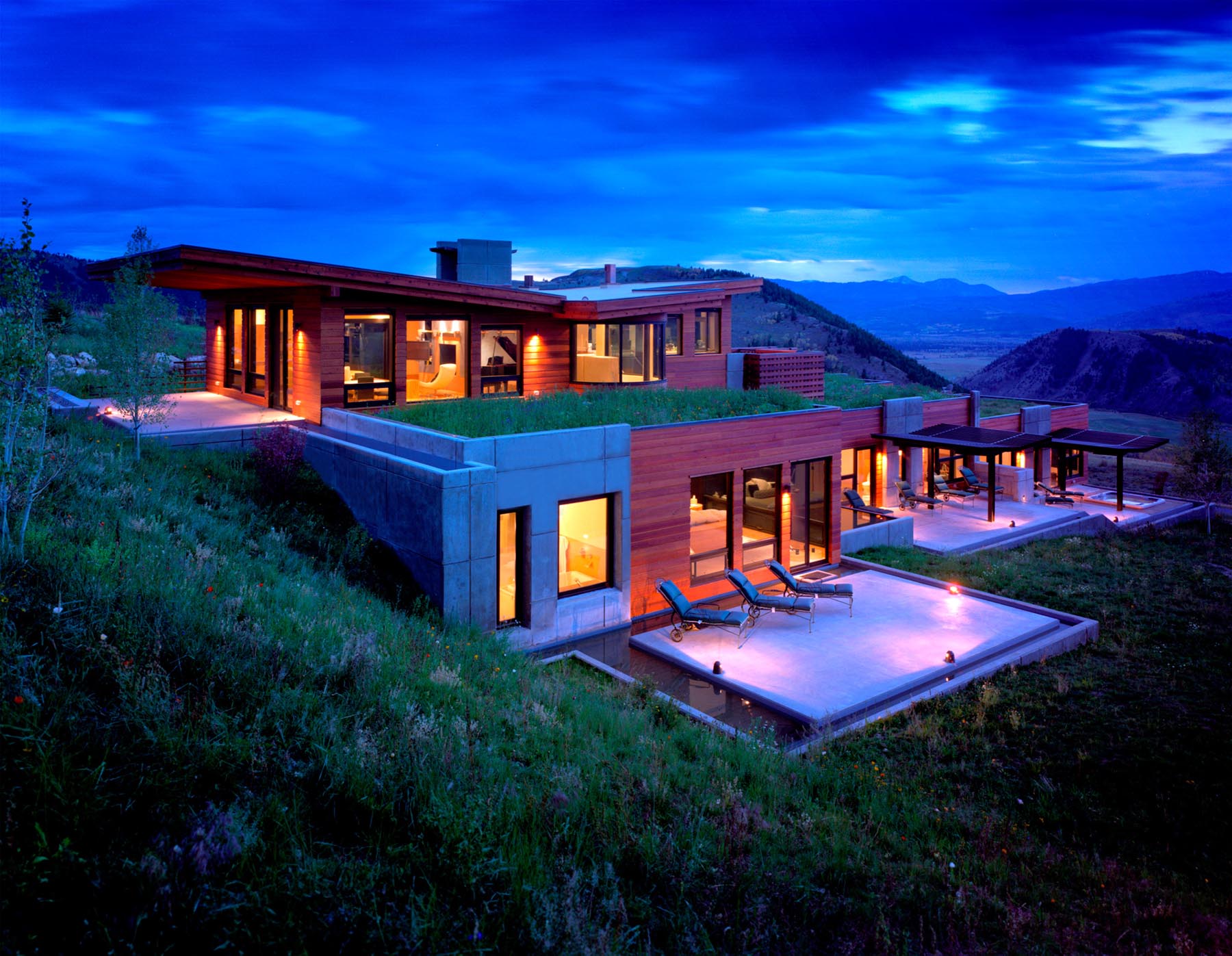 “I was looking for an elegant way to bring architecture into a dialogue with the land,” says Tom Ward, a principal founder of Jackson’s Ward + Blake Architects. With millions of acres of the land in question — the Mountain West — covered in grasses and wild flowers, Ward’s solution was not only elegant, but also simple: put grasses and wild flowers on the roof. “What better links a building to its place than if native plant materials are an integral part of its architecture?”

Ward and his partner Mitch Blake were not the first architects in the West to use sod roofs. Jackson’s sod-roofed visitor center was built in the late 1970s. And then, of course, much, much earlier, pioneers and homesteaders used sod. A classic photo hanging at the Jackson Hole Historical Society and Museum shows a woman playing a fiddle in front of her log cabin on Jackson Lake. Tear your eyes away from her fiddle and the mountains in the distance and you’ll see her cabin’s roof is sod.

Ward + Blake might be the first, or at least among the first, to consider sod primarily for its aesthetics. Homesteaders used sod because it was plentiful in an area where other building materials were in short supply. Architects in the 1970s used it as part of a larger eco-conscious architectural movement. Of course the partners appreciate the environmental benefits, but those weren’t what first interested them. “It sounds incredibly facile,” Ward says, “But for me it was all about aesthetics.”

Look at one of Ward + Blake’s sod projects and you’ll agree.

The firm has designed sod roofs for a multi-million dollar single-family home perched at 8,500-feet atop a blustery butte. The home’s expanses of concrete, glass and wood stand out among the traditional log and stone homes surrounding it, but it is still the flat roofs covered with wild flowers and grasses that your eyes keep returning to. Ward + Blake have also woven sod roofs into a mixed-use development in downtown Jackson with 20 apartments, retail space, and parking. In the middle of Jackson, the firm went not for wild and wooly native plants, but well-mannered and manicured lawns that better fit in downtown. “Wild grasses wouldn’t link this building to its more urban environment,” Blake says, “It’d make it stick out.” The butte-top home was featured in Architectural Digest and the mixed-use project won the firm an affordable housing design award from Residential Architect.

While the decision to use sod roofs to tie their modern, multi-material buildings to the landscape was an easy one, it was more difficult to figure out exactly how to do it. There are grow-your-own-green-roof kits available, but the harsh climate of the mountain west easily destroys them. Neither can you just sprinkle native grass seeds on a bed of soil on a roof. The West’s native grasses need to go dormant in the winter; the soil needs to freeze, killing off all plant life until spring. And soil can’t freeze if there’s too much heat coming up through the home’s ceilings.

“It was trial and error in the beginning,” Blake says. “We started off with some fundamental knowledge and then we were off to the races.” The firm’s earliest sod roofs are still growing strong today, nearly 20 years after they were built. It turns out that what’s good for aesthetics is good for the wallet … and also the environment.

“Since we’ve learned the practical benefits of sod roofs, we just like them even more,” Blake says.

“The life of a sod roof is at least twice, maybe three times, as long as that of a traditional roof,” Blake says. “It is ultraviolet light that causes the most deterioration of a roof membrane. The membrane of a sod roof never sees ultraviolet light.” And, while the initial installation of a sod roof does require great care, there’s little maintenance to be done after things are up and growing, especially when the roof is planted with the native plants and grasses Ward + Blake prefers. “Generally speaking, maintenance is minimal,” Ward says. Every sod roof we’ve done has an irrigation system built into it. Do a little irrigating in the spring to get things going and then leave it be. If it’s planted with native flora, it should need no more maintenance than the natural stuff at ground level. “

Sod doesn’t just protect the membrane. “Sod roofs help control erosion. Water percolates through the roof rather than pouring from drains,” says Blake. Sometimes, Ward + Blake even designs underground cisterns to collect the percolating water. The thermal mass of the roof helps with the home’s energy use too. Sod roofs keep homes warmer in winter and cooler in summer. “I can’t say how much it helps with energy bills, but there’s no question it does,” says Blake.

There’s also no question about the aesthetics of sod roofs. “If you’re going to have a house with a sod roof that people can see, be prepared to get some curious visitors,” says Blake. Ward adds, “The roofs are constantly changing. You never get tired of looking at one.” 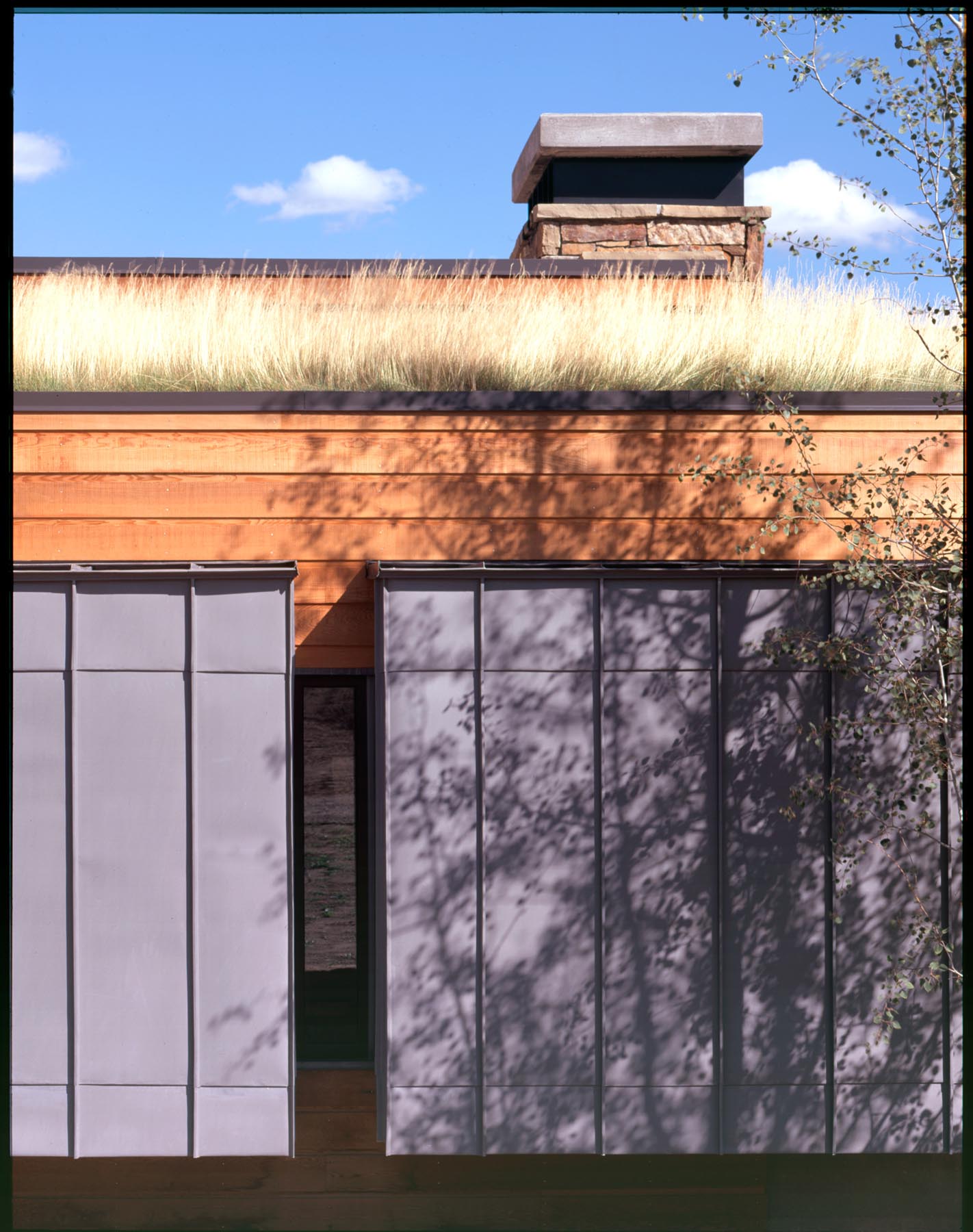