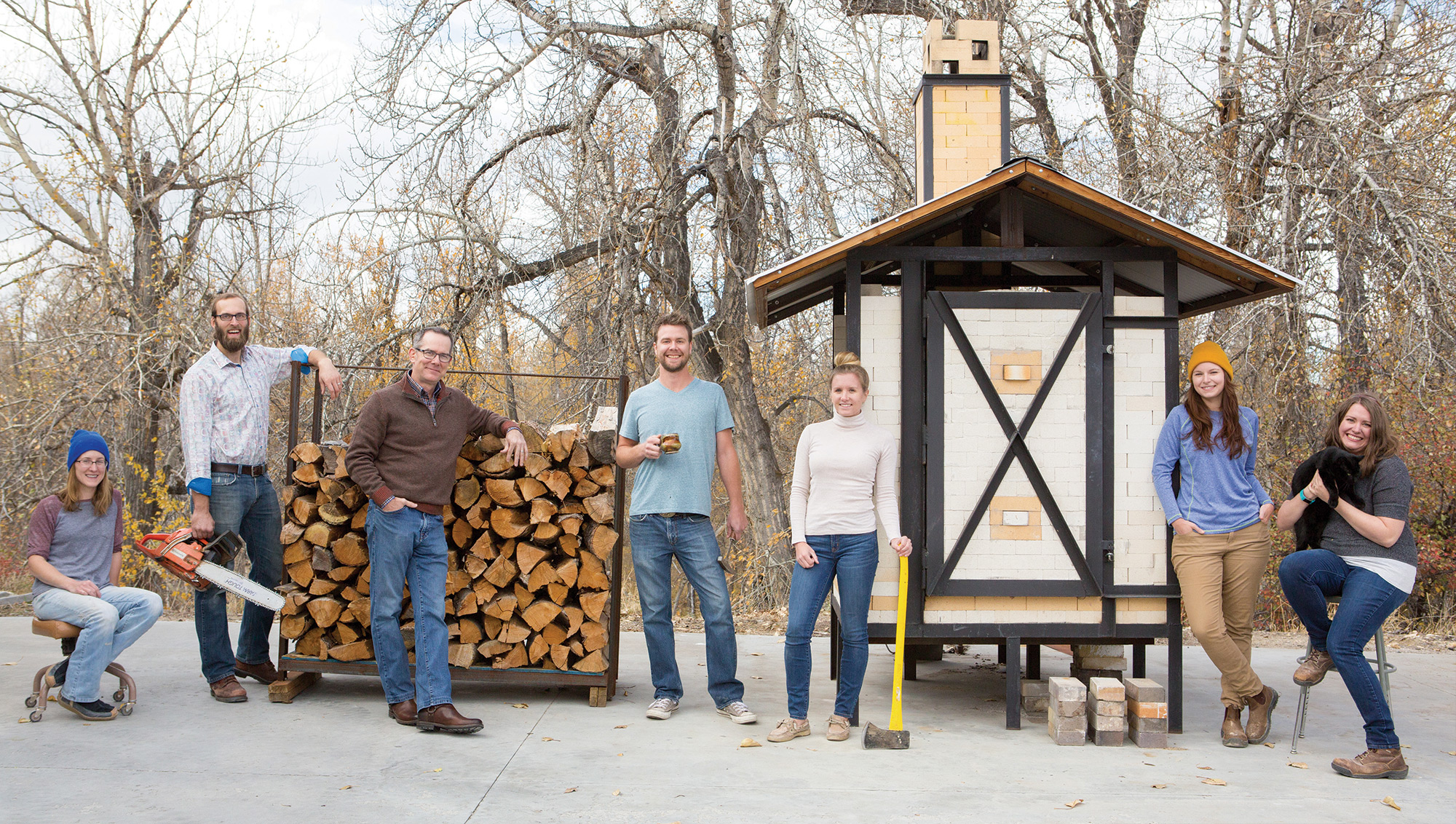 28 Nov Fire and Clay Beneath the Big Sky

THE LAND HERE CARRIES SOMETHING SPECIAL. We note the morning light on a grassy expanse, the whiff of sage, the hush of a small town before it wakes. Archie Bray knew this when he started his clay center in Helena, Montana, 65 years ago. Isabelle Johnson felt it when she painted scenes from her family’s ranch in the Stillwater Valley. And it’s one of the reasons that David Hiltner, a potter and former arts professor, would, with his wife Maggy, come to Montana to pursue their dream of starting a center dedicated to the ceramic arts.

Ten years later, the Red Lodge Clay Center is a thriving and highly-regarded hub in the national ceramics scene, one that hosts multiple artists-in-residence each year — recent graduates from the nation’s fine arts programs — as well as prominent visiting artists from across the country and overseas. And it is a thriving part of the community of Red Lodge, Montana, too, offering well-attended exhibition openings at its downtown gallery, lectures, demonstrations, and dynamic outreach programs that draw schoolchildren and adults from throughout the region to learn to work, play, and imagine with clay.

The Hiltners couldn’t be happier with the results — a good thing, considering David left a promising career as a ceramic arts professor at Wichita State University (WSU) in Kansas to start the center. “I was teaching to the 15 to 20 percent of the people who actually wanted to be there,” David says. “For a long time, Maggy and I had thrown around the idea of starting something like this, a place that would bring together all of the things I loved about teaching — working with the students who share a real passion for the medium, recruiting visiting artists, creative collaboration with colleagues. Every year we’d check in: Do we want to do it now, we’d ask each other, or wait until we retire?” David was in the process of applying for tenure at WSU when he and Maggy decided to change their lives completely. David recalls, “When I handed my resignation to my tenure renewal team, they looked at me and said, ‘You’re going to do what?’”
For young people trying to launch careers as studio artists or teachers, the options after undergraduate and graduate school are few. The Hiltners’ vision was to create a program where recent graduates could mature as professional artists before making their way in the world on their own. It would be an “incubator system,” as David puts it, where young people would learn to run a gallery, network, market, and teach. But for both David and Maggy, the question of place was as important as the program.

“We wanted to do this in a region people would be drawn to,” David says. “A beautiful, wild place that would allow for literal and artistic exploration, one with top-notch facilities where artists could make just about anything they could imagine.” A place, moreover, that would nourish and support the couple’s daughter (today they have two). One where Maggy — a prominent textile artist whose work has been written up in The New York Times and exhibited from coast to coast — would also be inspired.

The Hiltners considered several locations, including the California coast, but were drawn again and again to Red Lodge, which they first visited in the late 1990s when David taught ceramics at Northwest College in Powell, Wyoming. “We liked it here … a lot,” David says. “When we decided to actually make the leap, we returned to Red Lodge to check it out with the idea of a clay center in mind. We got off the plane in Billings and we both had tears in our eyes. ‘This is it,’ we realized. It seemed like we were home.”

An avid outdoors person, David grew up in Kansas where, from age 11 on, he hunted constantly, usually on his family’s farm with the German shorthaired pointer his uncle had given him. Many of his ceramic pieces — large platters and jars carved with patterns suggestive of croplands viewed from the air — are reminiscent of his childhood days, mostly spent outside. The Clay Center, to a degree, also represents his love of nature and the outdoors. Most who know the center know it for its downtown Red Lodge gallery with its outstanding exhibitions, its well-attended First Friday openings, and its sophisticated inventory produced by center residents and artists from across the country. They also know its expansive classroom space behind the gallery, where residents teach often sold-out classes in hand building, wheel throwing, and other techniques to children and adults from the region. But there’s also the center’s 7,000-square-foot studio 6 miles north of town. Surrounded by gardens and grape arbors teeming with butterflies and bees, the state-of-the-art facilities include six resident studio spaces, a large common area, an impressive array and variety of indoor and outdoor kilns, and 100 acres along Rock Creek where residents and visiting artists can walk, talk, and think.
The artist-in-residence program, which lasts one to two years, provides residents with free housing and utilities in one of two historic Red Lodge homes owned by the Clay Center, private studio space, and a stipend. In exchange, the residents spend 20 hours a week teaching classes, maintaining the studio space, and managing the gallery, events, and website sales. Between its residents and other visiting-artist programs, the center hosts 40 to 50 early and established artists per year. Last year, the center received more than 70 applications for its five long-term resident positions.

Andrea Moon, who grew up in northwestern Ohio, was a resident at the Clay Center from 2011 to 2012, and was later hired on to serve as the center’s residency and communications coordinator. “When I was a resident, I was exposed to such diverse experiences,” she says, “teaching in a community classroom, running a gallery, preparing an exhibition. And, as a young artist, I had the representation and the market to lean on when I really needed it.”

When the endeavor began, it was privately funded. Increasingly, however, profits from gallery sales, and sales of clay and glaze materials, support the Clay Center’s various programs. The majority of the gallery sales take place on the center’s comprehensive and detailed website. Brad Schwieger, Professor of Ceramics at Ohio University who served as a visiting artist at the Clay Center in 2009, says the website not only serves as an online storefront for the center, it offers an exceptional teaching tool to educators around the country. He directs his students to it when they want to gain a greater understanding of the work and lives of contemporary ceramic artists in North America.
“Red Lodge is making a huge difference in a lot of artists’ lives,” adds Schwieger. “It gives its residents an opportunity to digest the five-plus years they spent in an art program and sort out what’s important to them. It’s a great springboard to professional careers for young people. And for those of us who spend time there on sabbatical after 40-plus years in ceramics, teaching and making, it gives us a place to do research, develop ideas, and see them through. And then there are the community classes and exhibitions, the gallery where they showcase the best artists in the country, all managed by a bunch of vibrant young residents. It’s amazing, all they do. In such a short time, it’s really become a class-act place.”

Julia Galloway, a professor and former director of the School of Art at the University of Montana in Missoula, agrees. “David is investing in the larger ceramics community in such an important way,” she says. “He’s a gentle, quiet leader who’s making a huge impact. He’s helping to make Montana a hotbed for ceramic artists. And the gallery — I cannot state enough how strong that gallery is — it’s among the two or three best collections of contemporary pottery in America today. And it’s because of David. He’s so respectful of the artists he works with, he’s so respected in the field, it’s not a cattle call.”

When people talk about the Clay Center, they invariably mention Maggy. Although she is kept busy by her own thriving arts career and by the couple’s two daughters, she nonetheless plays many roles, both behind the scenes and publicly. “She’s my fantastic, not-so-silent partner,” David tells me. “She keeps me grounded. It couldn’t work without her.” Maggy is a constant and insightful presence at exhibition openings, she helps with decision-making and visioning for the future, and whenever David expresses any doubt or longing to spend more time on his own studio work, she helps to give him perspective. “‘Take a step back,’ she’ll tell me,” David says. “‘This is bigger than any ceramic vessel you’re going to make.’” 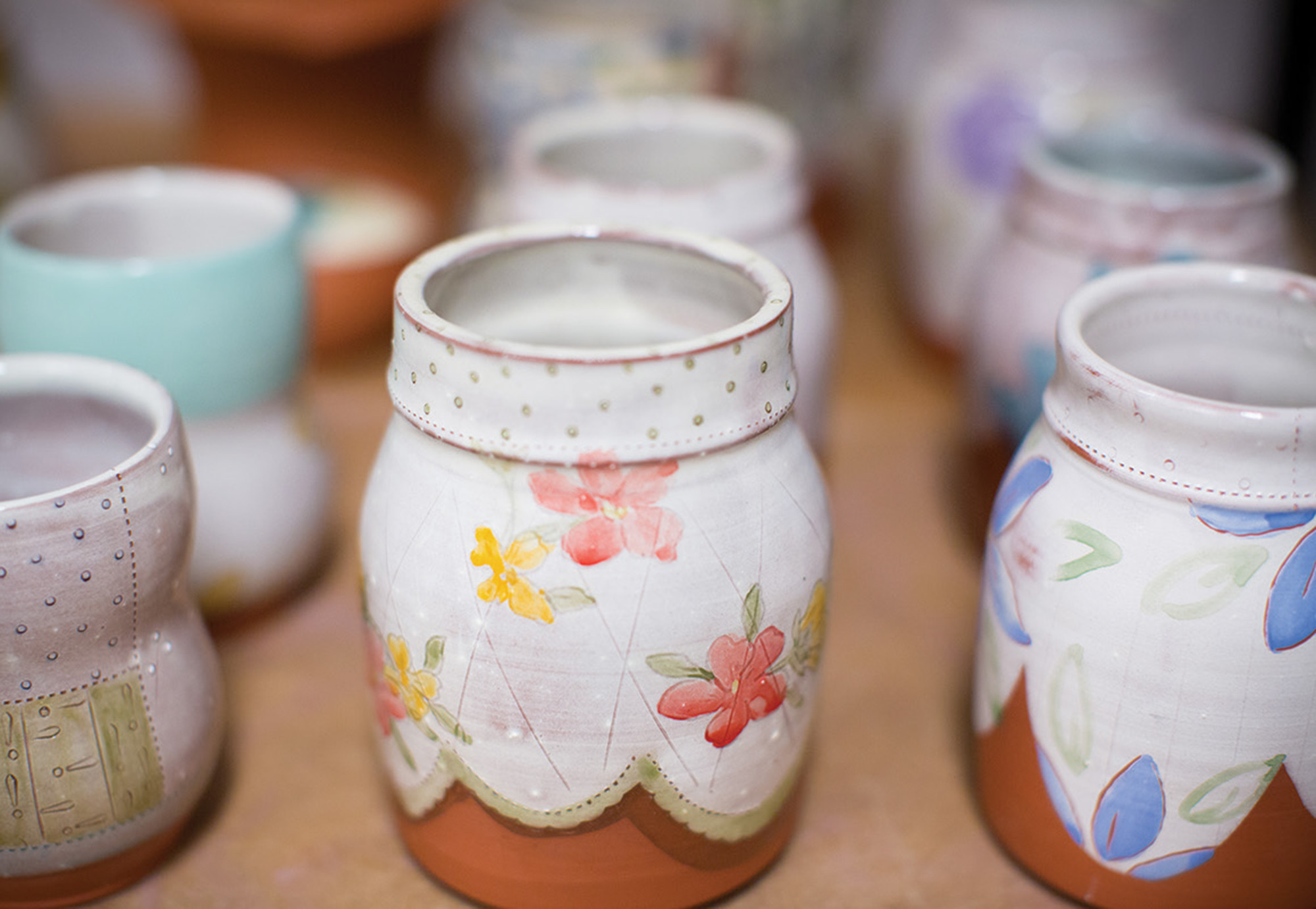 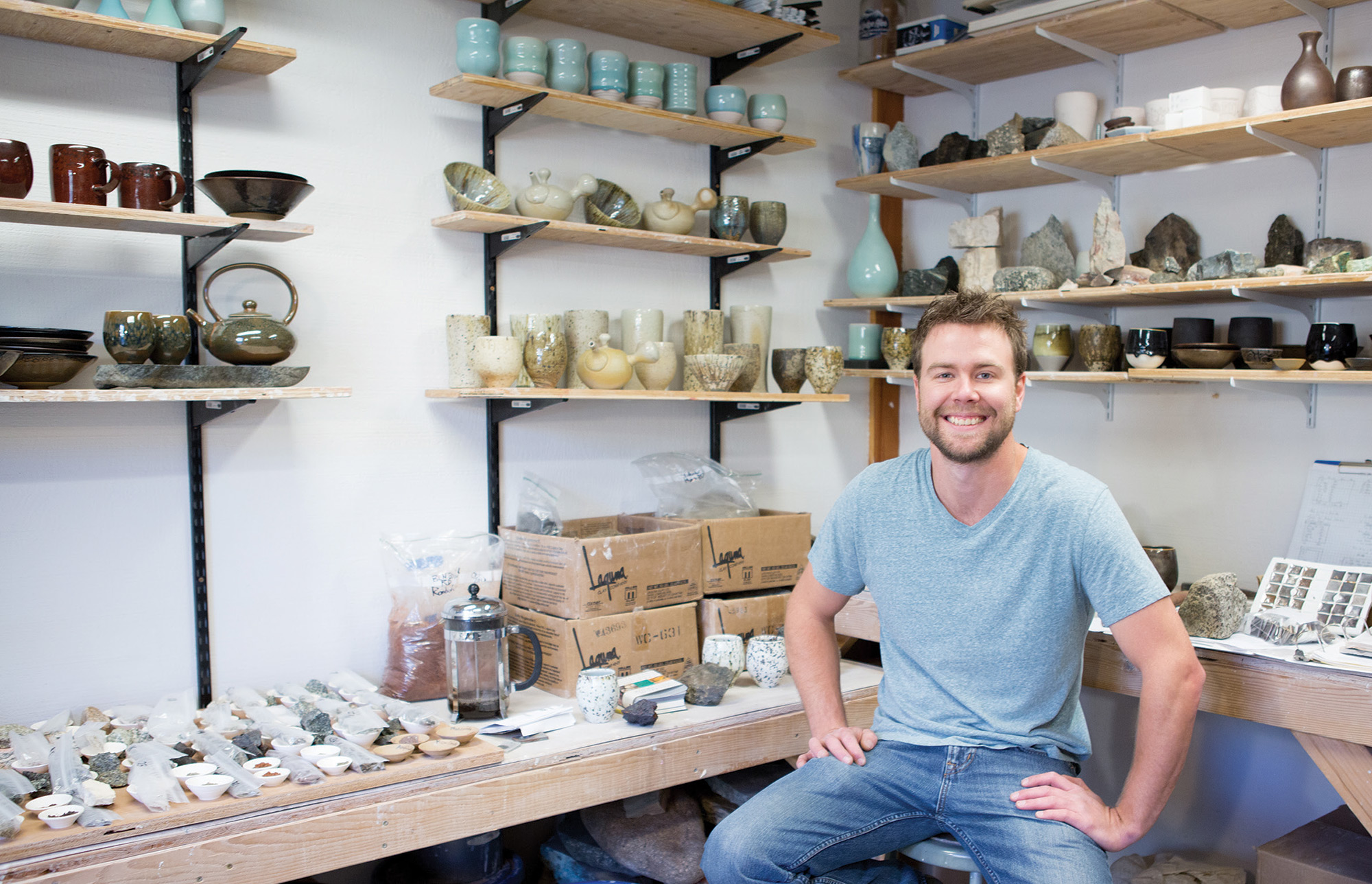 Long-term resident Matt Fiske gathers local rocks, grinds them into a fine powder by hand, and creates his own glazes. 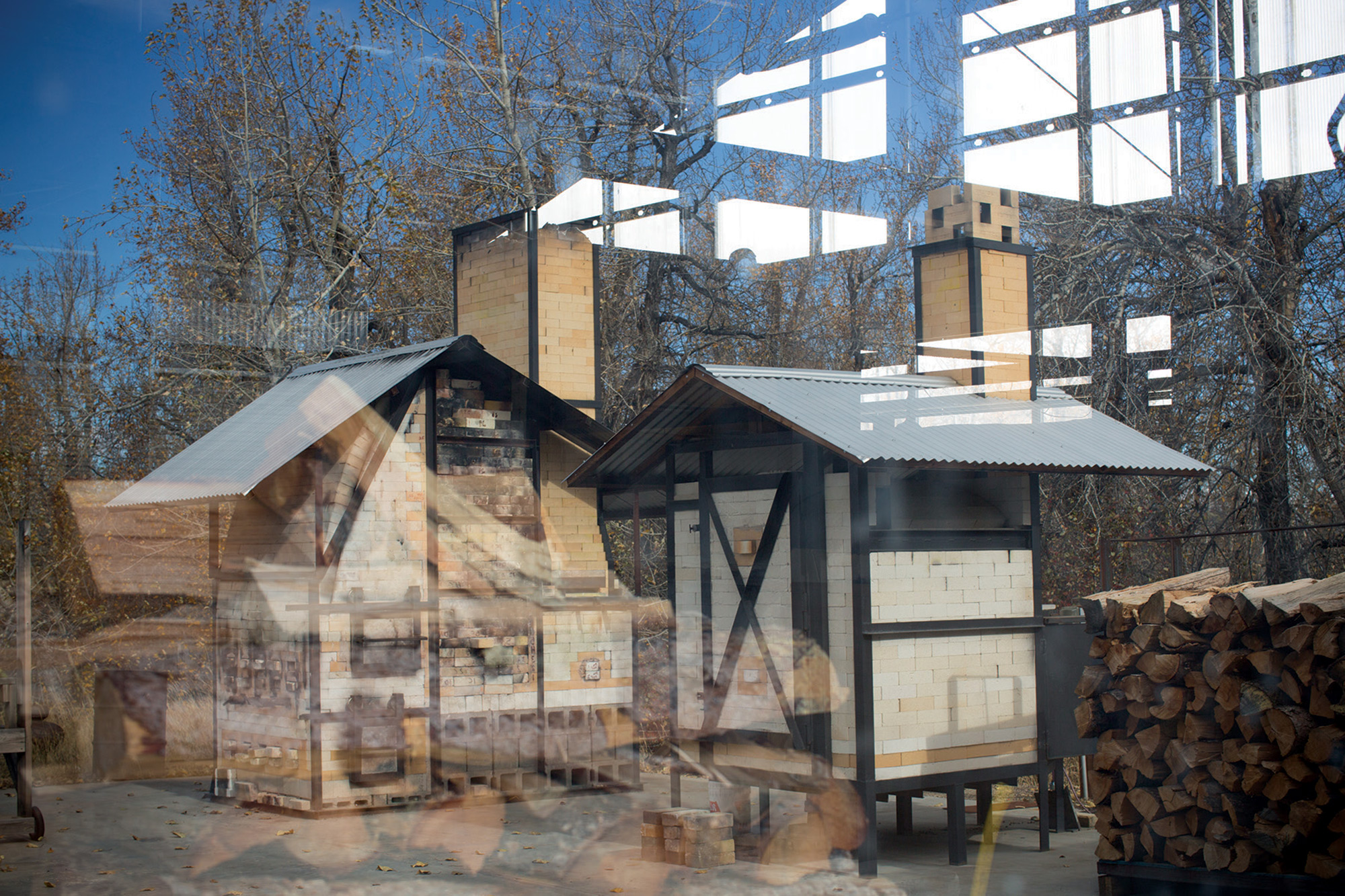 Wood kilns are reflected in a studio window. 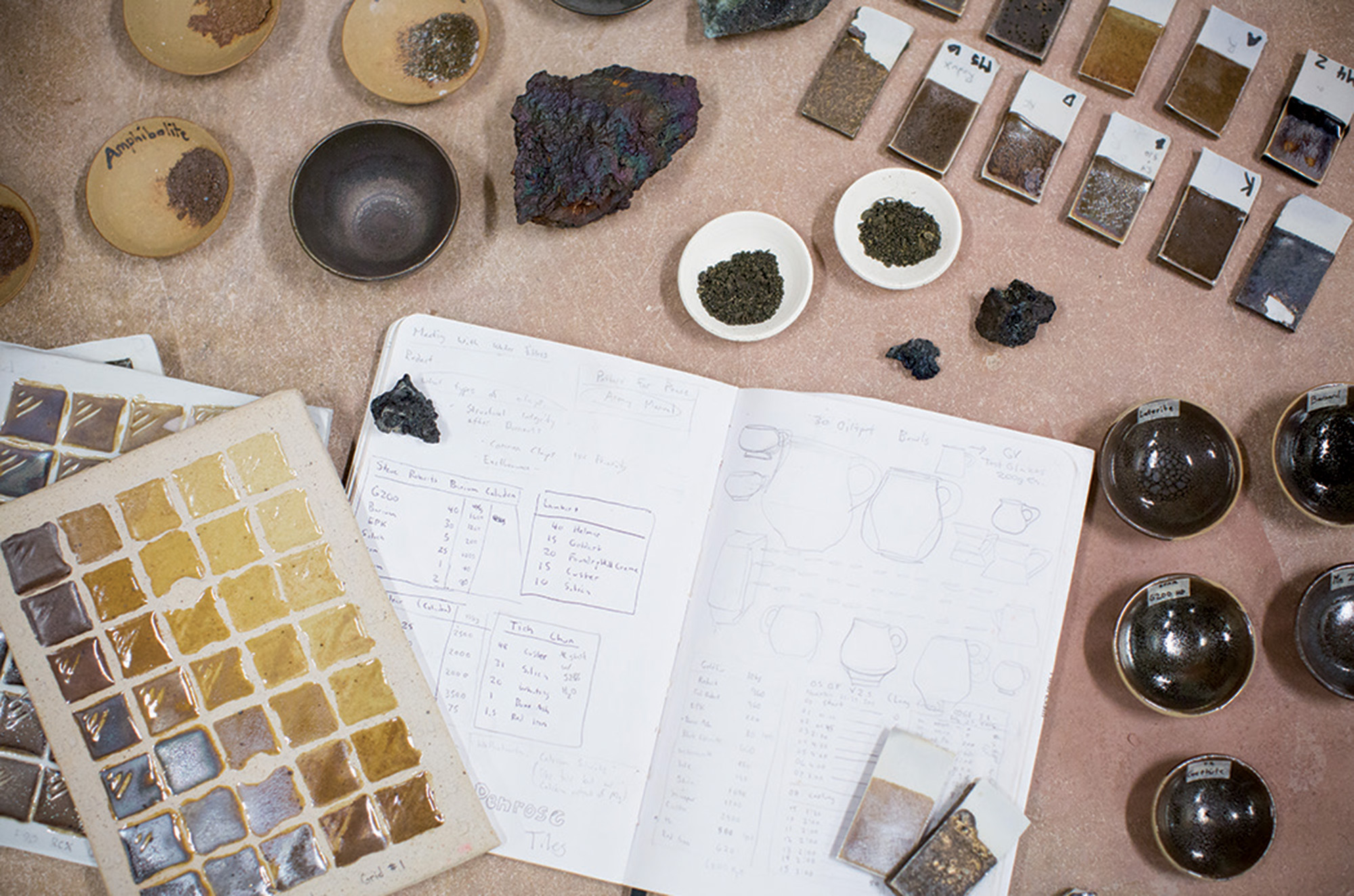 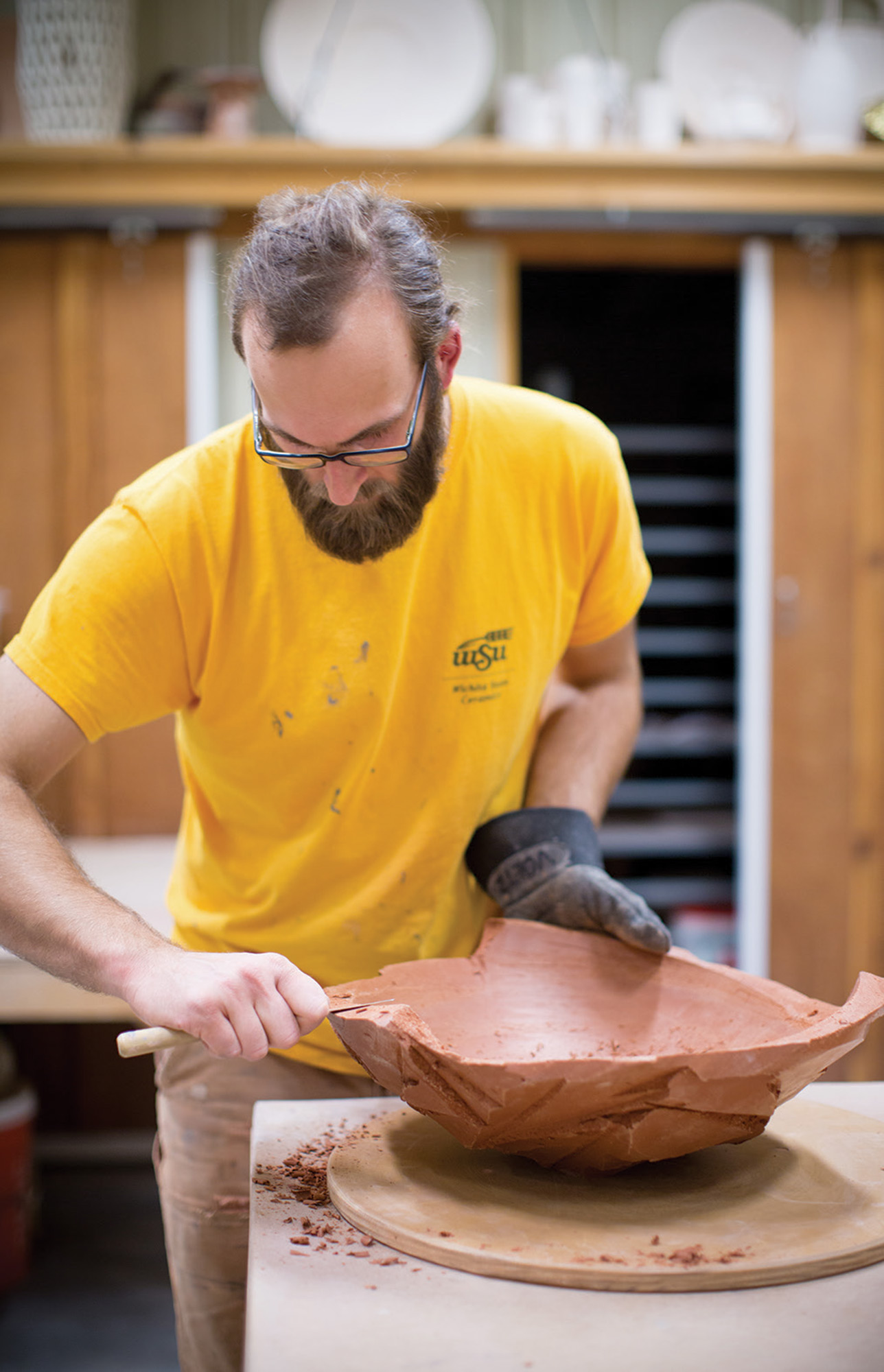 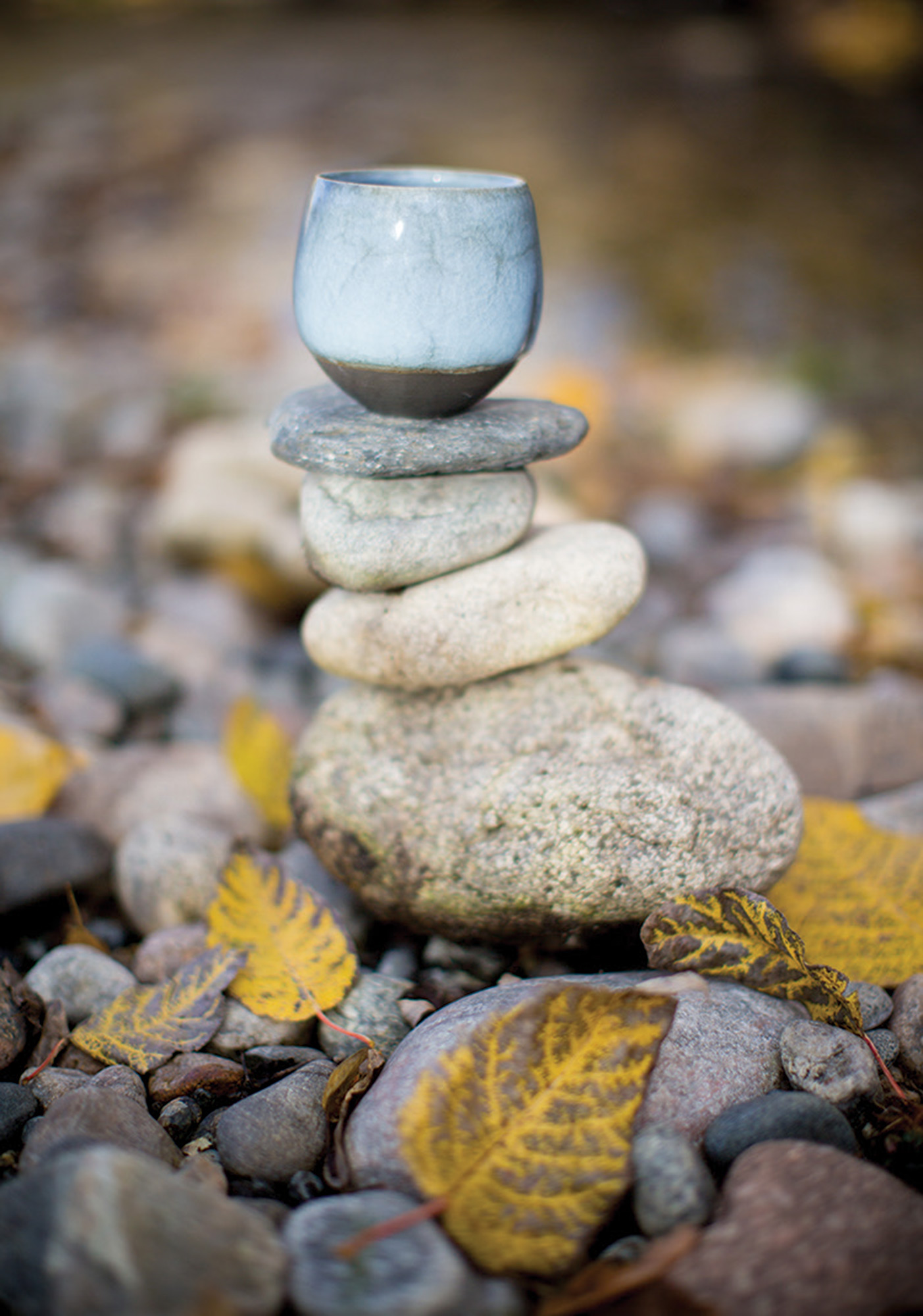 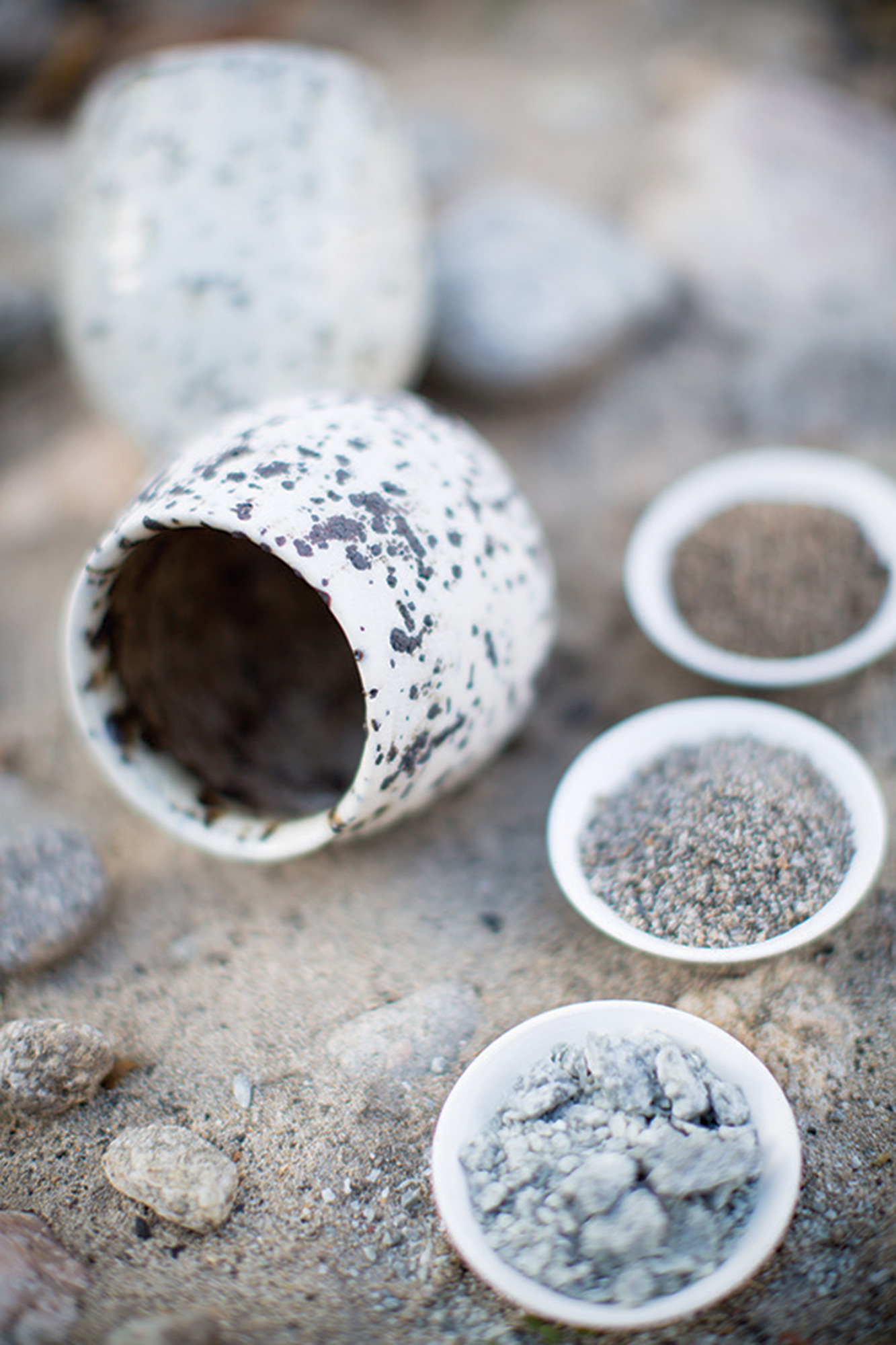 Pottery by long-term resident Matt Fiske lies beside ground rocks that he uses in his custom-made glazes. 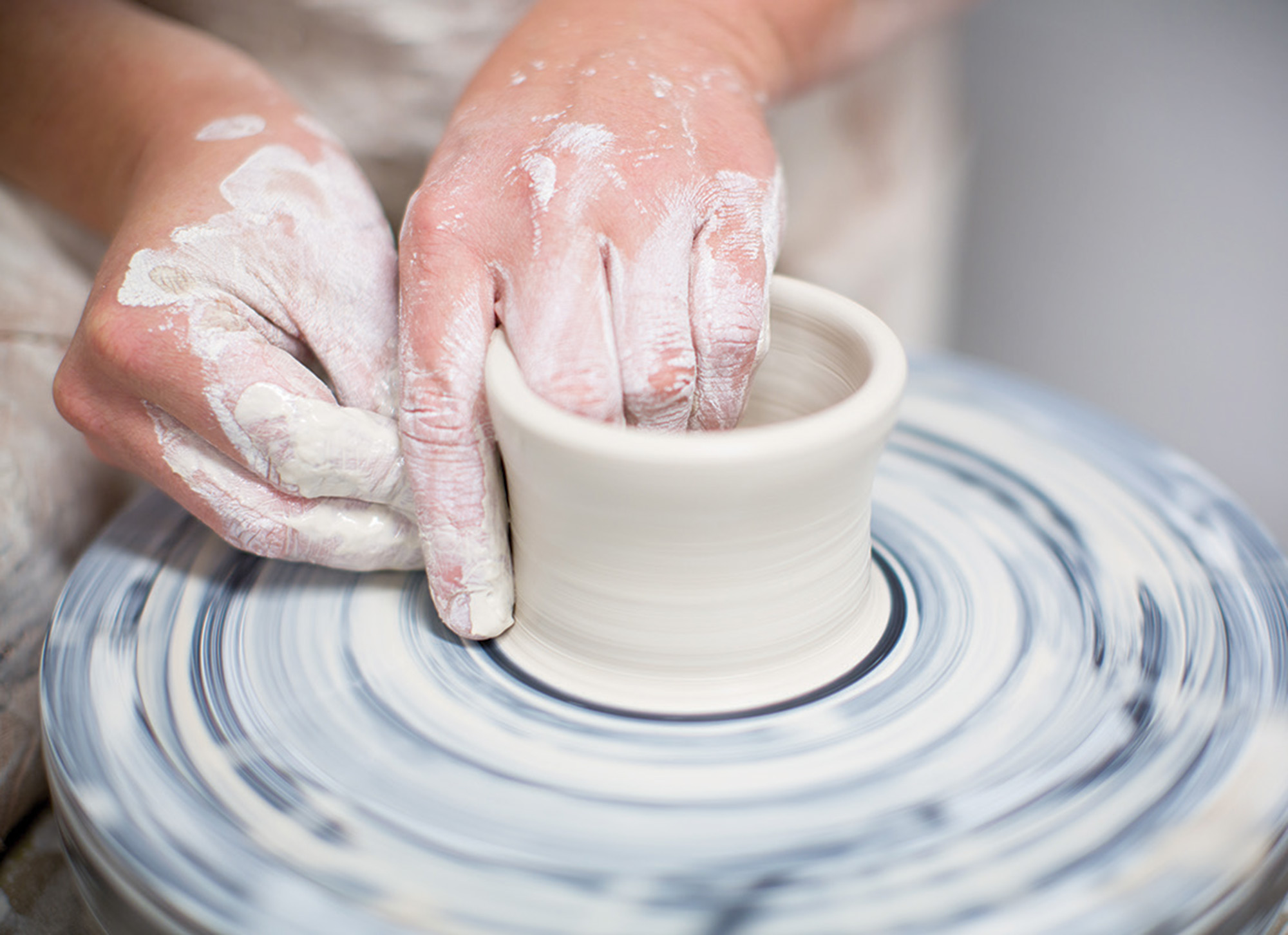 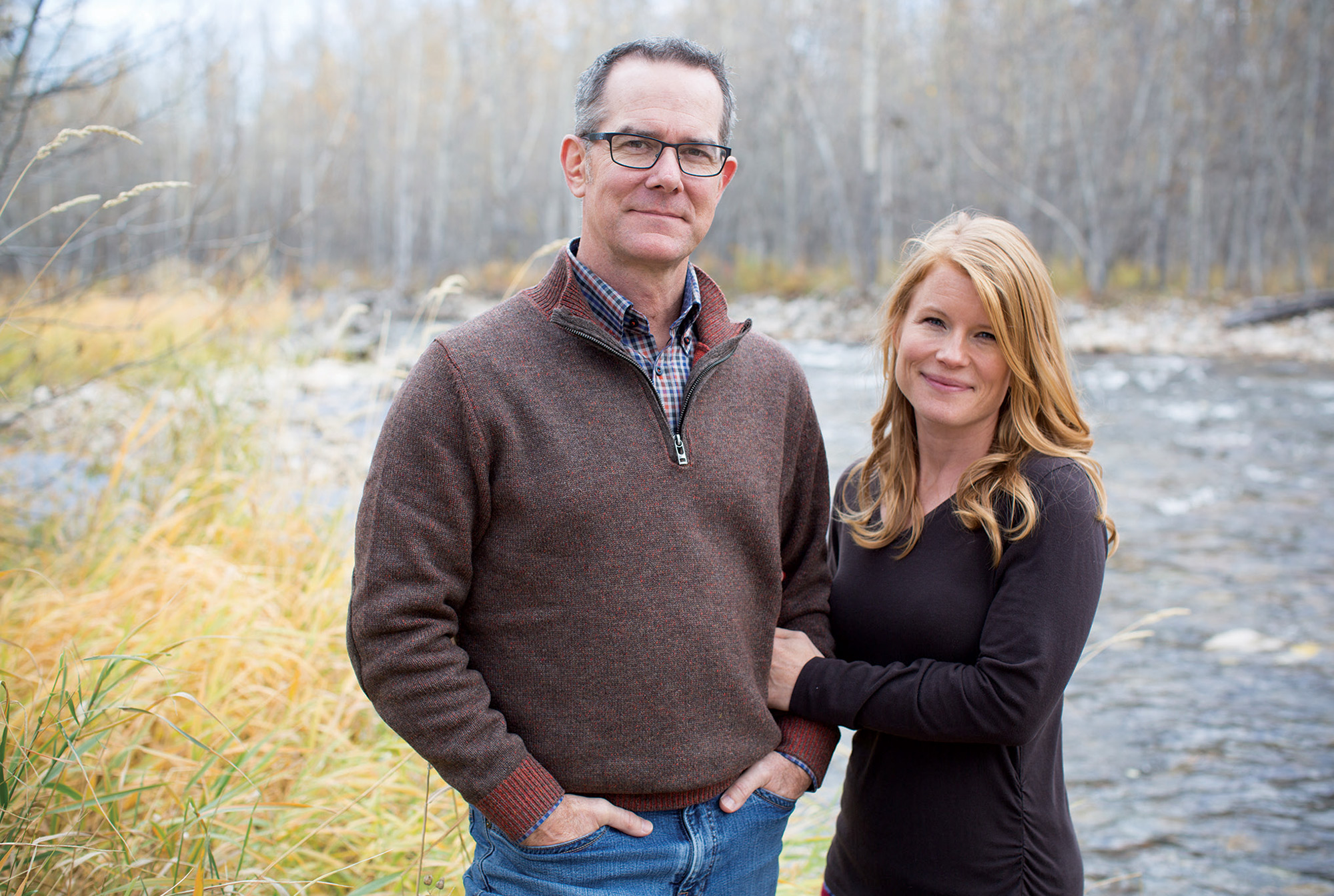 David and Maggy Hiltner stand on Rock Creek, north of Red Lodge and near the Center’s studio. 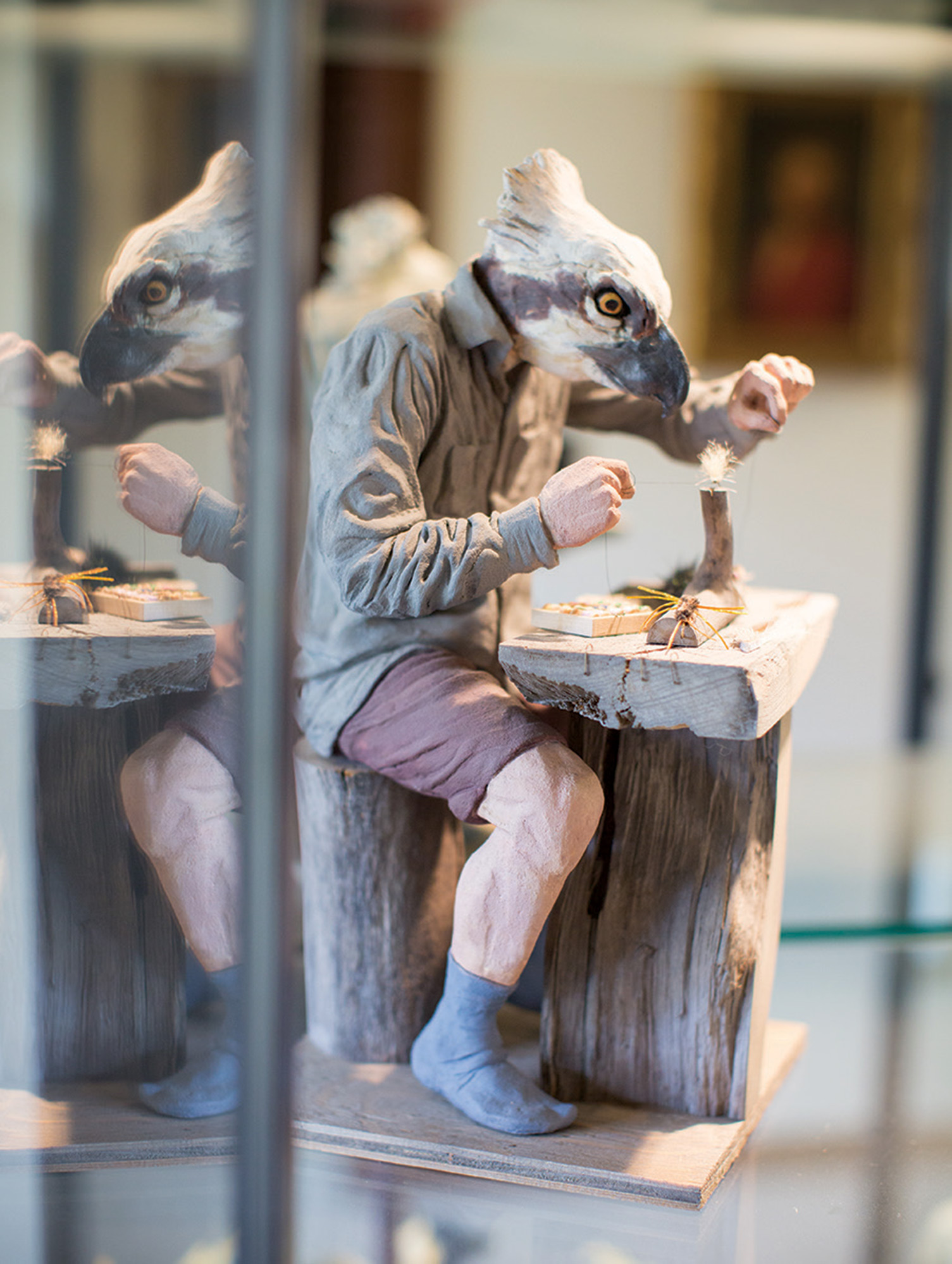 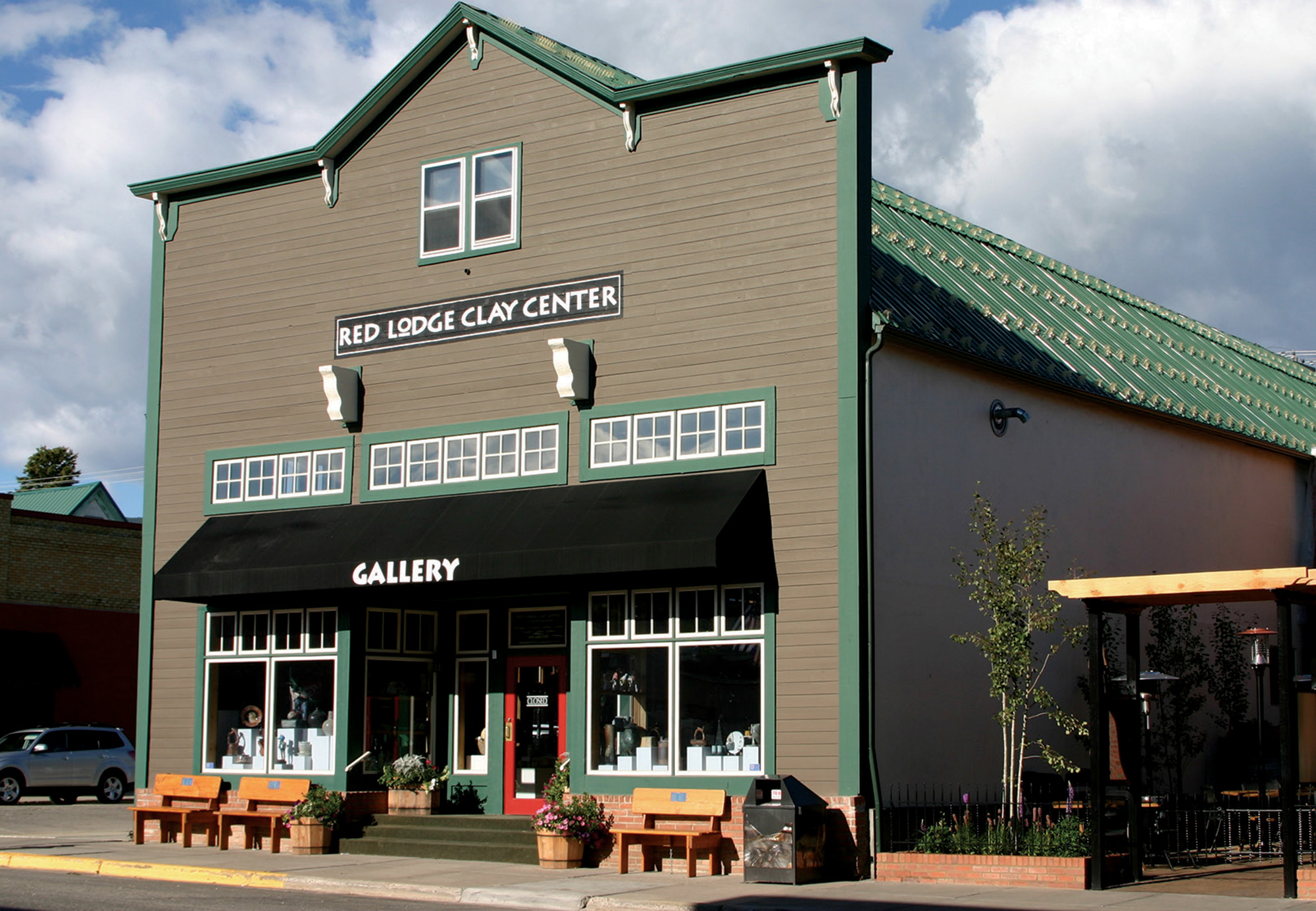 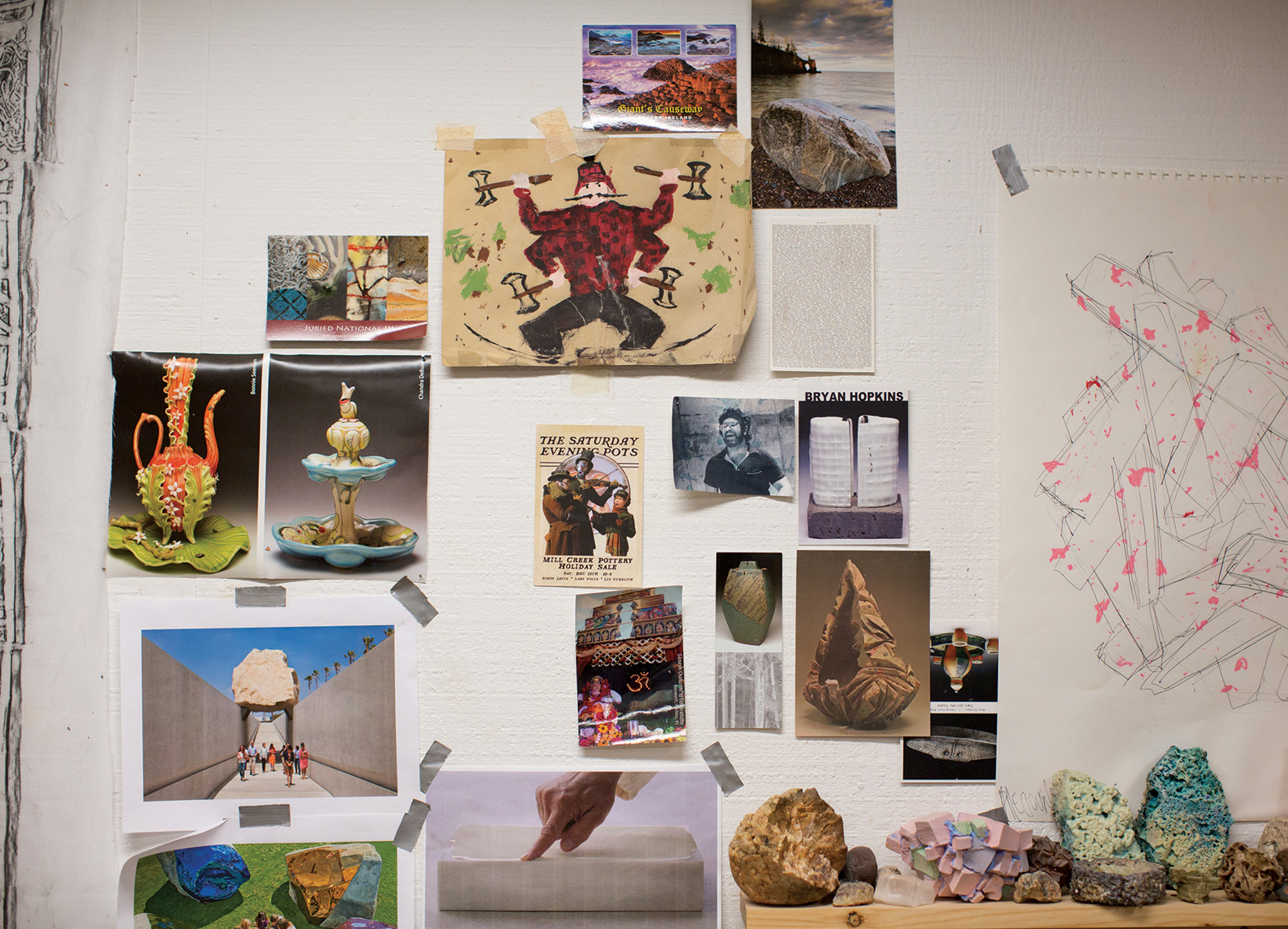 Long-term resident Lars Voltz uses clippings and samples as inspiration for his work. 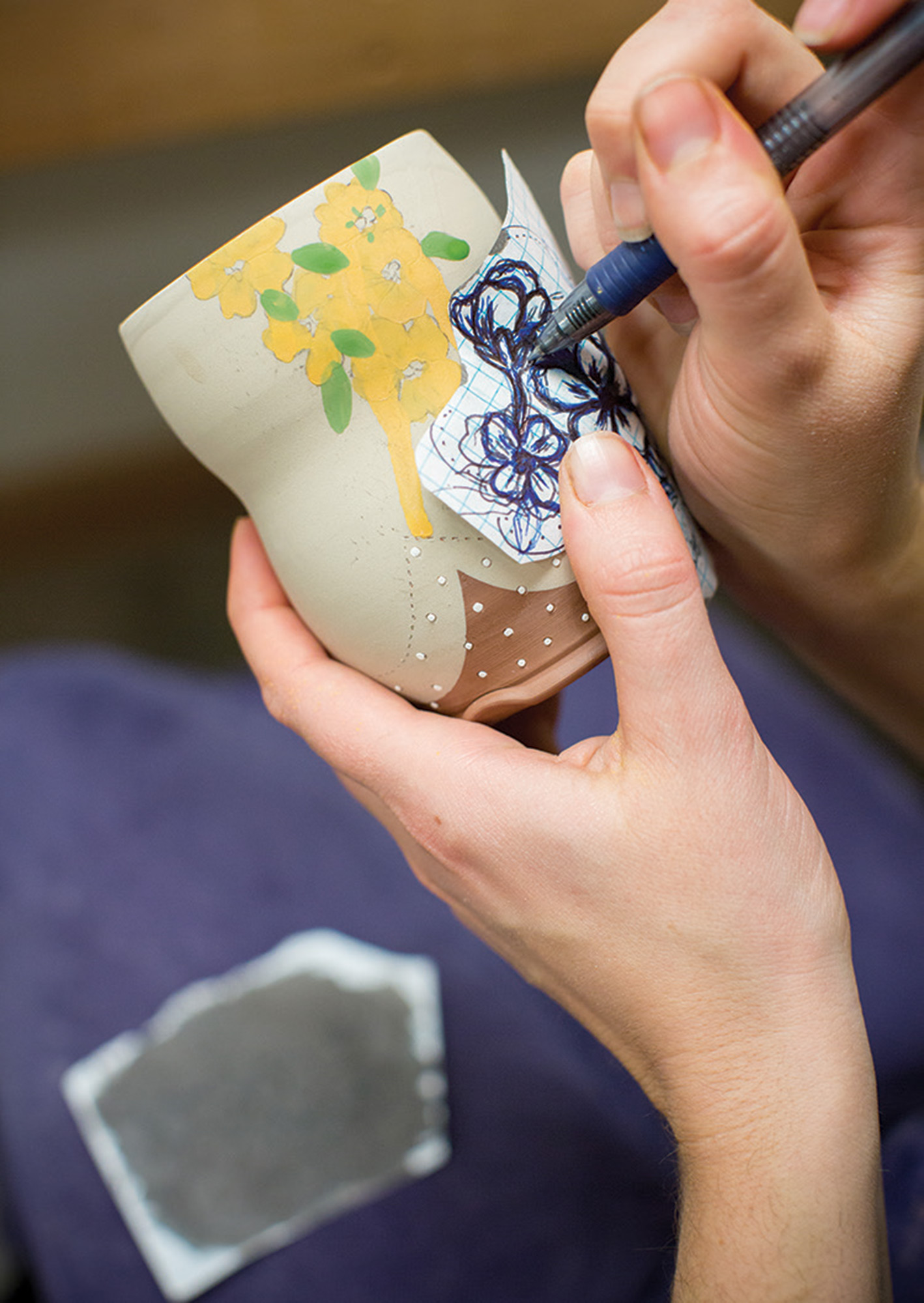 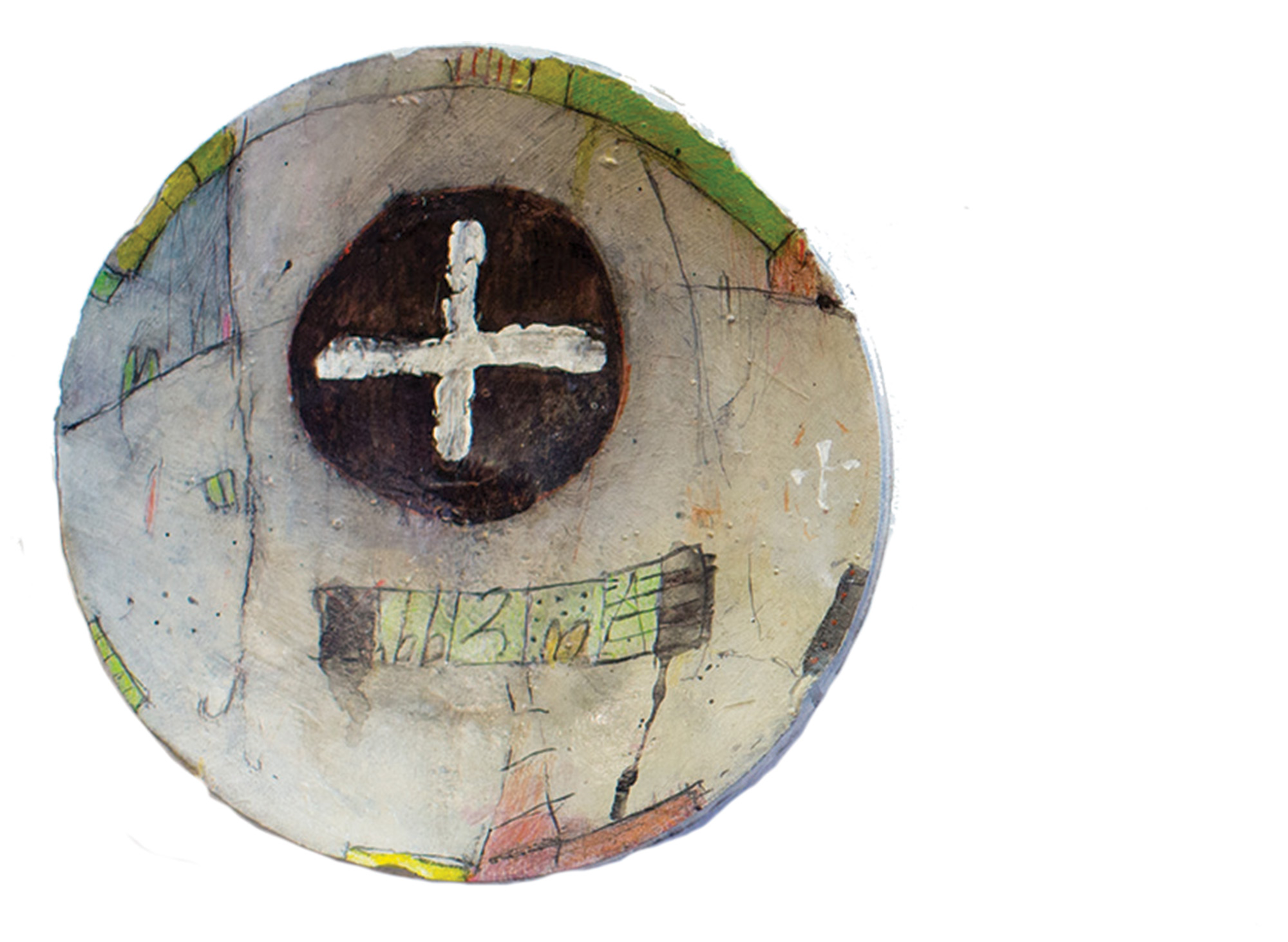 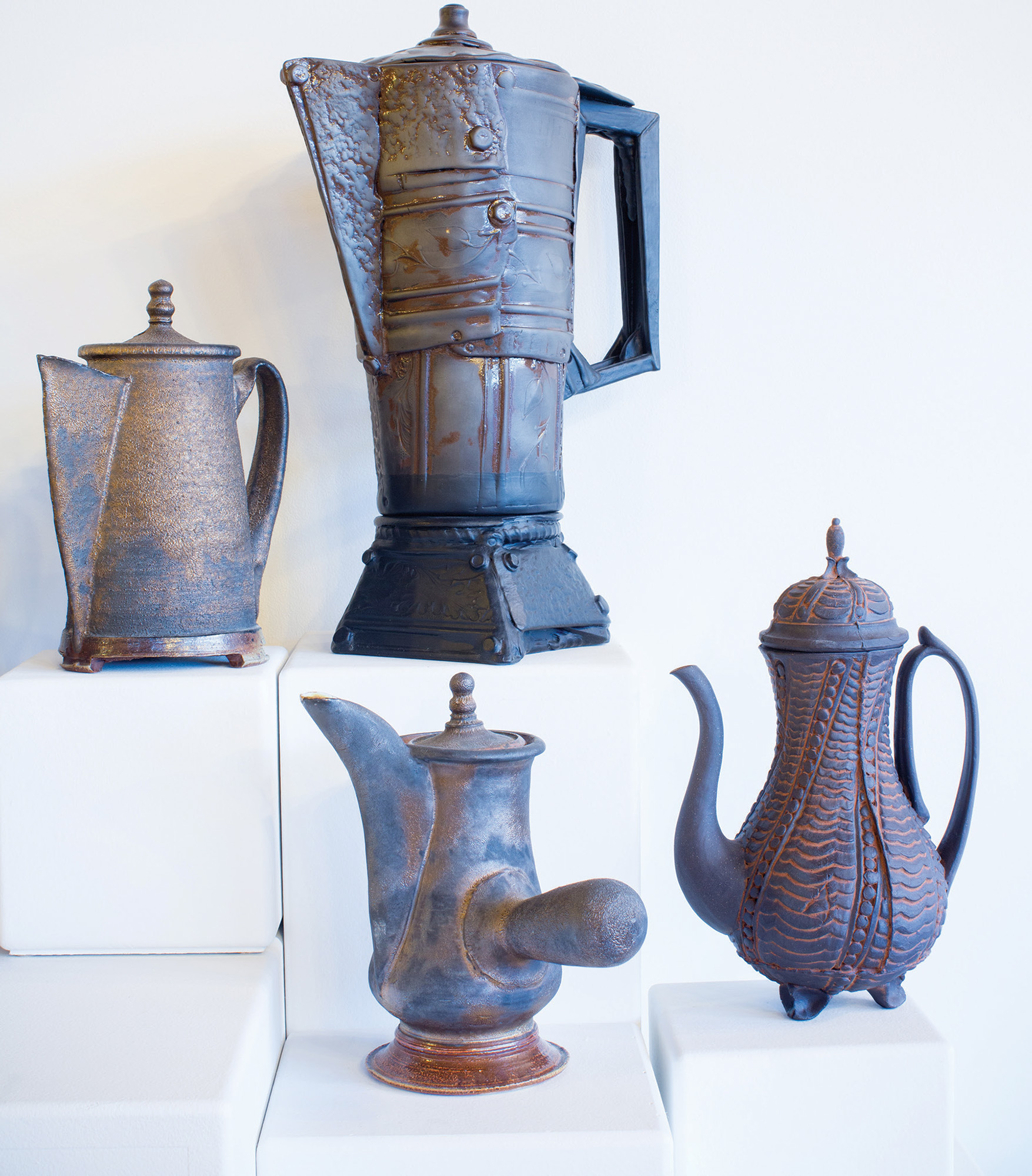 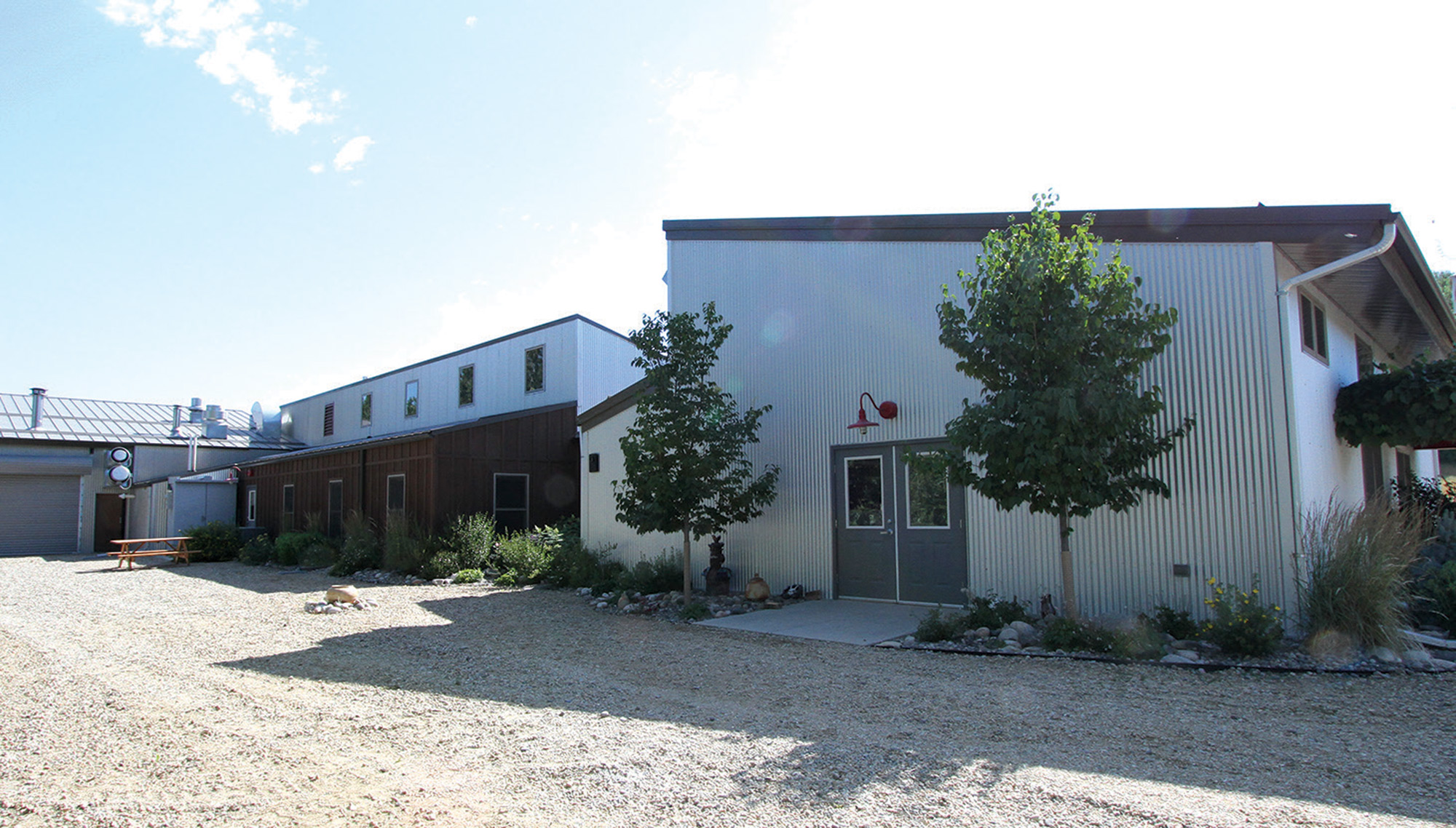