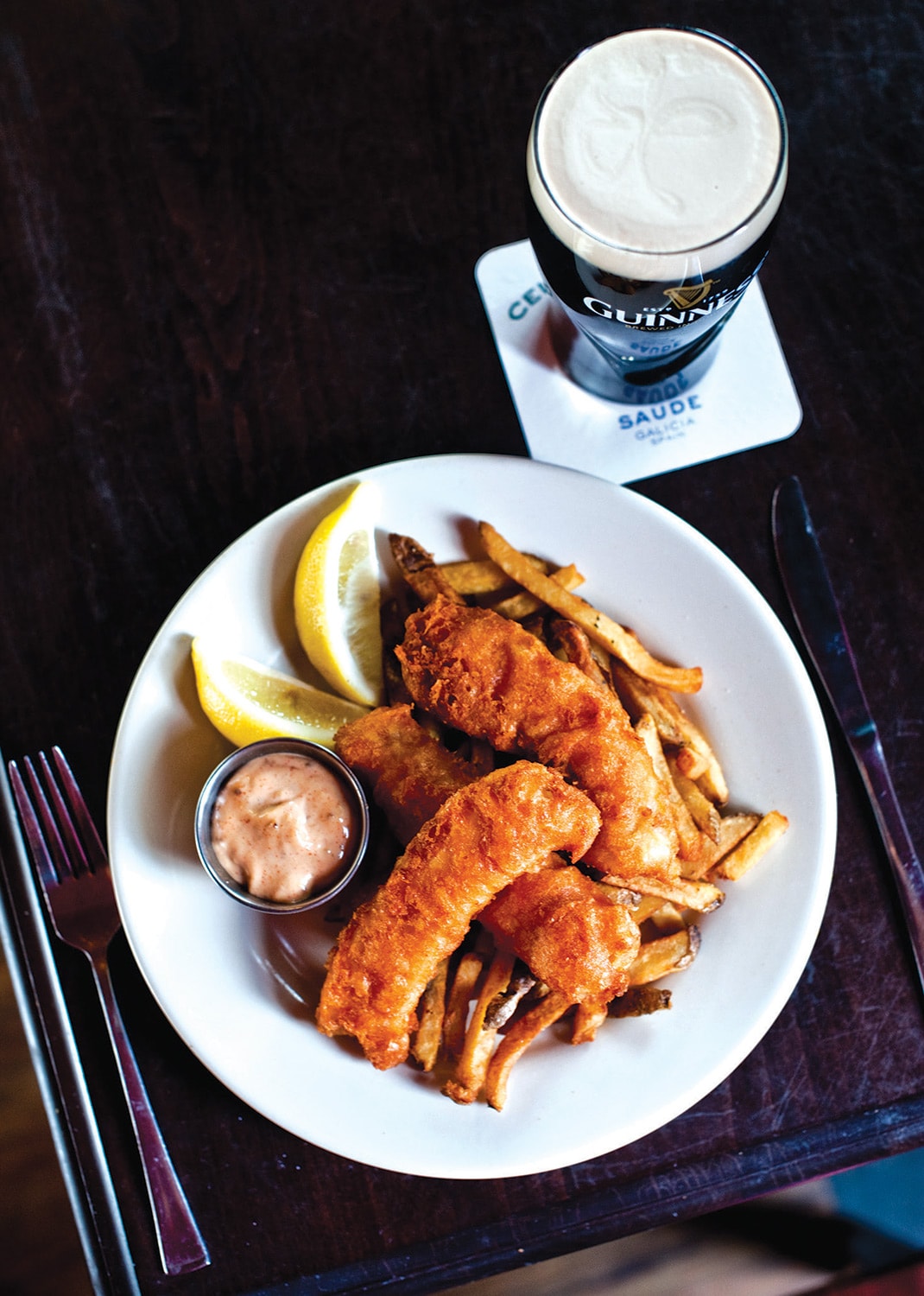 A pub classic, fish n’ chips paired with a pint of Guinness at the Celtic Cowboy, never fails to satisfy.

12 Aug Dining Out: The Gaelic Ghost

If Great Falls, Montana, had a ghost, it would be one of the city’s founders, Robert Vaughn. And if he roamed the floors today of the building that he envisioned in 1890, he would approve of the crisply painted and meticulously restored rooms of the Hotel Arvon. He’d be pleased to see the original paintings from Montana artists that grace the walls, perhaps thinking that it would be nice to show the work to his painter friend, Charlie Russell. Vaughn might rap his knuckles on the antique surface of the front desk in the lobby to signal good night. Then he’d likely head next door to sip a pint of Guinness at the Celtic Cowboy pub. There, in the mahogany-walled bar, he’d raise his glass and toast in Gaelic, “Sláinte!” 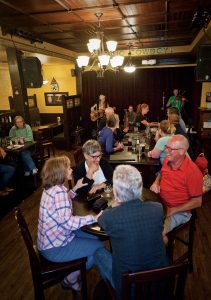 With live music playing most nights of the week, the Celtic Cowboy has become a gathering place for locals.

The presence of Vaughn’s pioneering figure is so strong at this boutique hotel and restaurant that he might as well still be lingering. Wayne Thares, one of the partners who championed the extensive historic restoration of the Arvon Block in downtown Great Falls, credits Vaughn as the inspiration behind the effort to save this grand old building.

“The title of the book inspired my vision for the hotel,” Thares said of Vaughn’s memoir about his 36 years on Montana’s frontier, entitled Then and Now.

Vaughn was a Welsh immigrant who homesteaded a ranch along the Sun River in 1869, when Montana was still only a U.S. territory. Later, in 1883, he helped found the city of Great Falls. To spur progress, he launched a business venture in the burgeoning downtown area. Named for his daughter, Arvonia, the Arvon Block was once the center of commerce in this frontier town. It boasted a state-of-the-art livery called the Axtell Stables, the Derrig Grocery, and the Travelers Rest Hotel with lodging for horse teamsters and other travelers. In 1890, the Great Falls Tribune wrote of Vaughn’s investment: “His block on First Avenue South, which is nearly completed, will be an enduring monument to his business and faith in Great Falls.” 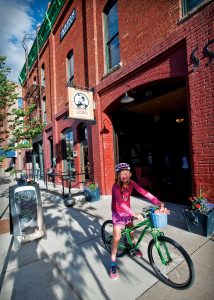 The restoration of the historic Hotel Arvon has revitalized an essential block in downtown Great Falls.

As the oldest building in Great Falls, the Arvon was listed on the National Historic Register in 2001. Despite the fact that it is an impressive example of 19th century mercantile architecture, it had fallen into extreme disrepair, suffering from years of roof leaks, damage from pigeon infestations, and structural decay. In 2009, Thares heard rumblings that the whole block was being considered for demolition. After confirming the rumor with the Great Falls historic preservation officer, he gathered a group of investors to form the Arvon Block Redevelopment Venture, and set out to save the structure. The historic status allowed the group to attain essential tax credits that helped to facilitate the $8 million renovation.

When the group purchased the building in 2011, they embarked on a massive renovation that included structural reinforcements from the basement to the roof. Daunting factors included cracks in the foundation, boarded windows, broken doors, peeling paint, decrepit plumbing, falling lathe and plaster, hazardous wiring, and toxic accumulations of pigeon droppings. But the team soldiered through. Working with Dick Anderson Construction, the group watched the beauty of the building emerge as all the crucial parts were restored. Skylights brought daylight into the third floor, solar panels were installed, and every surface received a new coat of paint. The newly renovated hotel — which opened in 2015 — includes 22 modern rooms and 11 luxury suites, and has  garnered historic preservation awards. 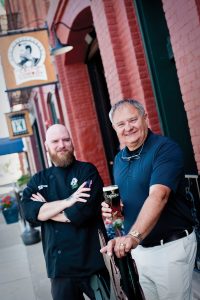 Chef Matthew McMahon, left, and owner Wayne Thares toast to the success of the extensively restored Arvon Block in Great Falls, Montana, which includes the Celtic Cowboy pub and the Hotel Arvon. The Celtic Cowboy’s hearty pub grub, presented with a Montana flair, draws guests of the hotel as well as families from the surrounding community.

“Today the building and the businesses are an anchor to a portion of downtown that had been neglected,” said Thares. “It’s revitalized activity in that area and become an important part of commerce again.”

The Celtic Cowboy opened its doors in 2013 serving what Thares dubs, “regional fare with an Irish twist.” Since then, the menu has expanded beyond pub grub. Executive chef Matthew McMahon offers seasonal specialties such as mahi-mahi, chicken green curry, and duck confit. But it’s the pub menu that steals the show. It’s hard to resist Scotch eggs or classic fish and chips; the breaded and fried favorite pork chop Vaughn on a Wheat Montana bun; or the ultimate Celtic burger, which is a grilled bison patty topped with pastrami and cheese. 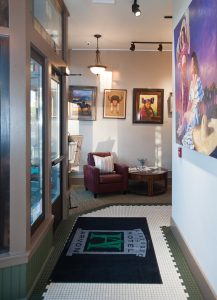 The lobby of the Hotel Arvon features original work from Montana artists. Built in 1890 and recently renovated, the hotel reopened in 2015 with 33 modernized guest rooms.

Bands play music most nights at the Celtic Cowboy. Boisterous patrons talk with raised voices that meld with songs that range from Celtic jigs to modern folk. While it’s a gathering place for friends and family any night of the week, business groups and trivia buffs crowd in on quiz night. Weekly events attracting diners include the Sunday jazz brunch, discounted pints on microbrew Monday, whiskey Wednesday (when any of the 80 select whiskeys are offered at half price), and ThirstDay’s $1 discount on beverages.

Nearly 100 years after Vaughn’s death in 1918, the room still swells with the noise of community and commerce, giving voice to the pioneering visionary who built it more than a century ago.

The ghost of Robert Vaughn would approve. “Sláinte!”