Standing before his easel, Troy Collins eases dark gray paint along the edges of a 16-by-40-inch canvas. A plastic container sits on the floor filled with his paints, large tubes of oils set inside caulking guns. There is no shortage of paint on his canvases. His trademarks are layers, textures and vibrancy.

Cadmium red, hansa yellow orange, cobalt blue. From the warm colors that come up along the edge of his glass palette across to the greens and then down to the cool blues, Collins sets up his paints the same way every time he begins.

He dips a paper towel into a well-used jar of thinner, then goes straight for the pure crimson. Swirling color moves across the stark canvas like a dust storm.

“I can see the painting before anything goes on,” he says, touching the end of the paper towel into a darker red this time. “First I block in the colors, then I sketch the shapes. Shapes are important. It’s the shapes I design that are interesting.”

Right now Collins is at a peak, both in his career and in his life. His work sells faster than he paints, and he’s been invited to the prestigious C.M. Russell Museum show in Great Falls, Montana, for the last three years.

“I’m in a relaxed season of my life right now,” he says. “My power bills don’t get shut off anymore.”

Six years ago, Collins quit his landscaping business to paint full time. The repercussions included divorce, losing his home and his vehicles.

“It would have been easy for me to give up,” he says. “But I didn’t. I kept on persevering. Now, I’m in that good place and my paintings reflect that.”

Collins went to college thinking he’d be a teacher, because that was what his in-laws wanted. It wasn’t his passion. He taught for two years then decided to start a landscaping business in Idaho.

“It allowed me to be creative,” he says. “Planting trees, grass, I got to see something tangible at the end of the day.”

During that time he did some landscape work for well-known painter Robert Moore, and they hit it off.

“He asked me what I did in the winter,” Collins says, using a deep blue to create a loose line across the lower half of the canvas. “So I started working for him, cleaning his brushes, doing some remodeling, and blocking paintings for him.”

Kind of like what he’s doing now on his own canvas.

“He taught me design principals and color theory,” Collins says. “Because he’s colorblind, I had to describe each color to him in terms of intensities and neutrals on the color spectrum.”

After the end of those long days, Collins began picking up a brush and starting his own paintings. At first they were quite similar in tone and style to Moore’s, but over time they began to reveal Collins’ unique perspective.

“It’s always exciting when he works in public,” she says. “He uses such a massive amount of paint. There’s a lot of play, not just his color palette, but the way he plays with the paint itself. He’s very intuitive. He responds to each mark he makes.”

Collins is the gallery’s top-selling painter.

“I think a lot of people who look at his stuff want that kind of energy he creates in their homes,” Boals says. “He puts a positive light on everything, so why not be surrounded by that on a daily basis? And he’s very confident with his strokes, everything he does is fearless. He wants to see what the paint can do and he pushes it.”

For the painting he’s working on now, Collins has a vision of the finished piece in his head, but he doesn’t rush to it. He adds a swirl of green and brown along the foreground. Before the underpainting is complete, he delineates the composition, the outline of a story.

Only then does he take out his palette knife.

“I don’t try to match nature,” he says, tearing a square of pure white poster board from his supplies. “Look at this, it’s white. But then,” he holds it up to the bright light of the sun, “it looks dark against natural light. You can’t copy nature, because you’re using pigment to describe light. They’re two different kinds of communication.”

Instead his work is all about relationships of color, the progression of values. Lights and darks, warms and cools.

“Without the cool colors, the reds are not as beautiful as they could be,” he says. “It’s not the reds themselves that are beautiful but the relationship between the reds and the blues. As an artist my job is to convey that perfect relationship.”

The neutral colors celebrate the excitement of the pure colors.

Alissa Banks, owner of A Banks Gallery in Bozeman, Montana, also represents Collins, but first encountered his work when she worked at the Mountain Trails Gallery five years ago.

“I fell in love with his work back then,” she says. “It’s so full of passion. When we decided to open this gallery he was my first call. I love working with Troy mostly because I really believe in his work.”

Banks watched his work evolve over the years.

“There’s so much more depth in his work and he continues to grow technically each year,” she says. “Every time he does a show he pushes himself a little more out of his comfort zone.”

Earlier this year Collins had the honor of attending the farewell speech for Chuck Hegel, former U.S. Secretary of Defense, because Hegel owns one of Collins’ flag paintings. It hung in the Pentagon for years.

“It was a huge deal for me,” Collins says. “I’m just an artist from Montana, but there I was with President Obama and Vice President Biden. All these powerful people.”

He says it was easy to feel insignificant, and that feeling grew when, after the ceremony, Collins took a walk in Arlington Cemetery.

“I had a revelation,” he says. “It doesn’t matter what other people think about you, how you rate within your particular professional field, or who has more power. My value as an artist is to inspire people, to help people to feel something. Comparing myself to other people is a trap. That day freed me up to paint more honestly. I let go of a lot of stuff out there.”

Using his knife to mix the mounds of paint, he applies the layers. Starting with the lighter areas, he moves to the top of the painting with squares of yellows, reds and oranges. It’s hard to say where it’s going when he begins to slide the sky colors into the mix. When the violet comes along intermittently, it teeters on the verge of chaos.

“It’s like a chess match,” he says, working quickly, the piece changing with every touch of new paint. “I make a move and the painting makes a move. With every move, the painting counters, asking for something in return.”

With his knife he edges in violet, slowly a mountain appears. A mountain! His knife work is deliberate, but quick, with a kind of confidence that allows him to make on-the-spot decisions about line, edge and tone. He’s beginning to reign in the composition, pulling it back from the abyss.

“I can’t wait to put in the trees,” he says. “That’s when the painting comes together.”

He leans back to get perspective on the work. His knife floats over the piece as if there is a magnet behind the canvas attracting the paint to where it needs to be applied. Now the sky appears, sporadically through the canopy of leaves.

Next is the part that the whole piece has been leading up to: the trees.

“This is the validation part for me,” Collins says. “It describes something people can connect to. It’s like the actors are coming onto the stage.”

First, the supporting roles, vague lines in the distance made with thin scratches in the paint, referencing a familiar, yet totally new experience. After that come the lighter tones of aspen trees, their trunks crooked and endearing, full of knots and silvery bark.

And now the interesting perspective comes into play, the abstract midground punctuates the deeper foreground. The images appear as a mere inference of trees and foliage.

“We see things abstractly all the time,” Collins says. “When I look at a person I see their eyes in total focus but everything else is out of focus. It’s how we see the world.”

The big question, the question artists ask themselves all the time is, how do you know when a painting is done?

Collins’ work is studied and deliberate, although to some it may look like he’s painting with abandon. Upon closer observation, it is exactly within the confines of discipline that freedom flies. 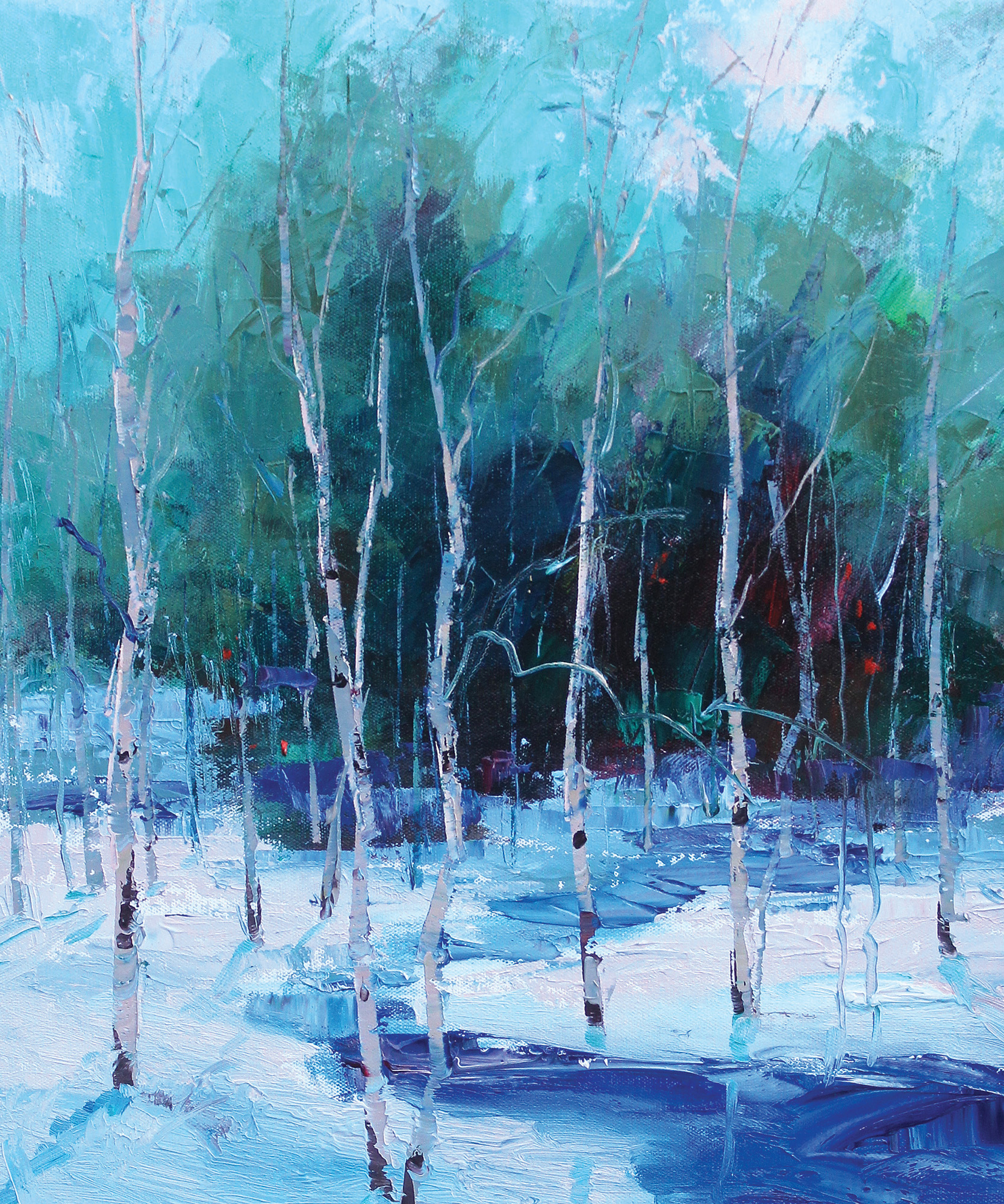 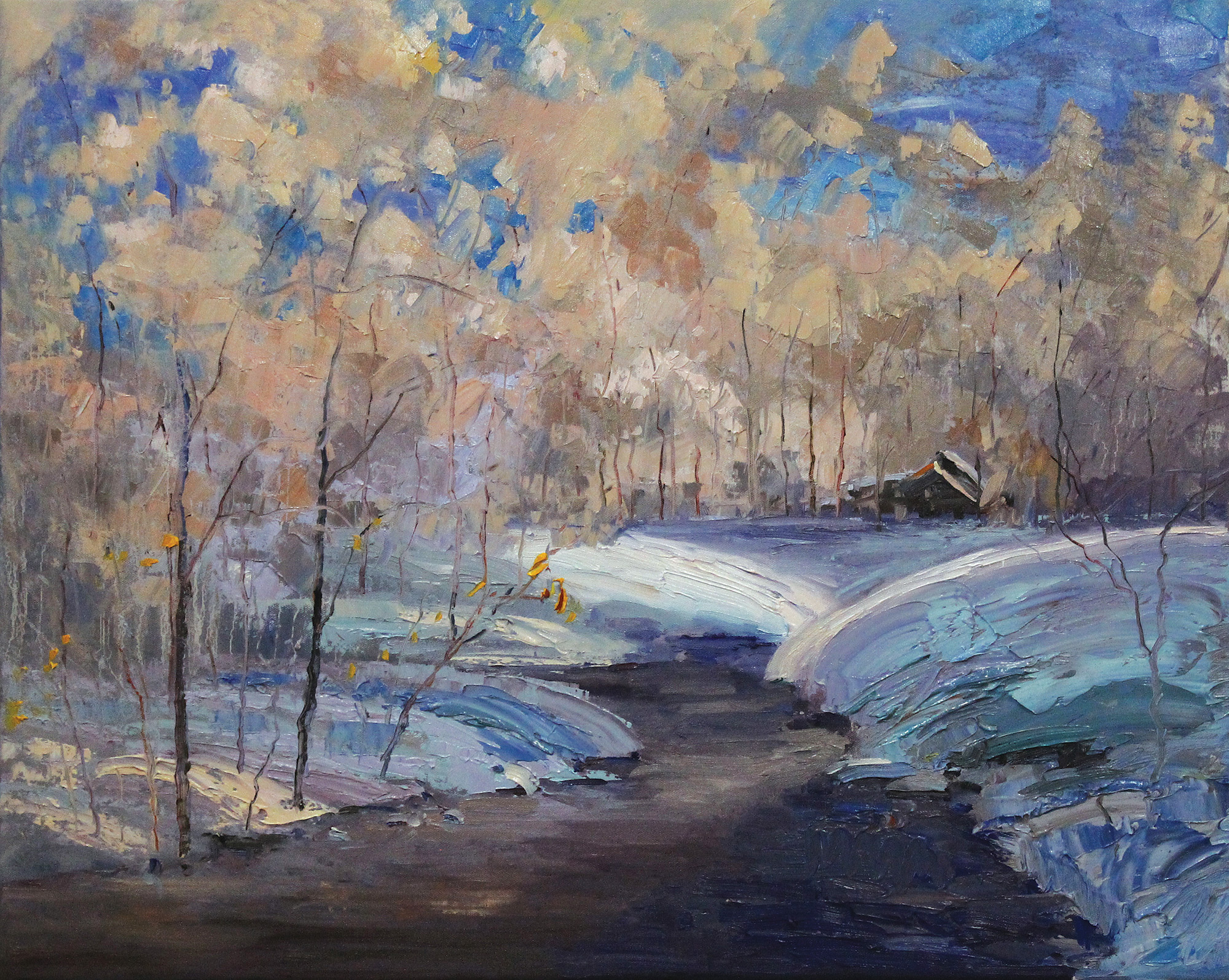 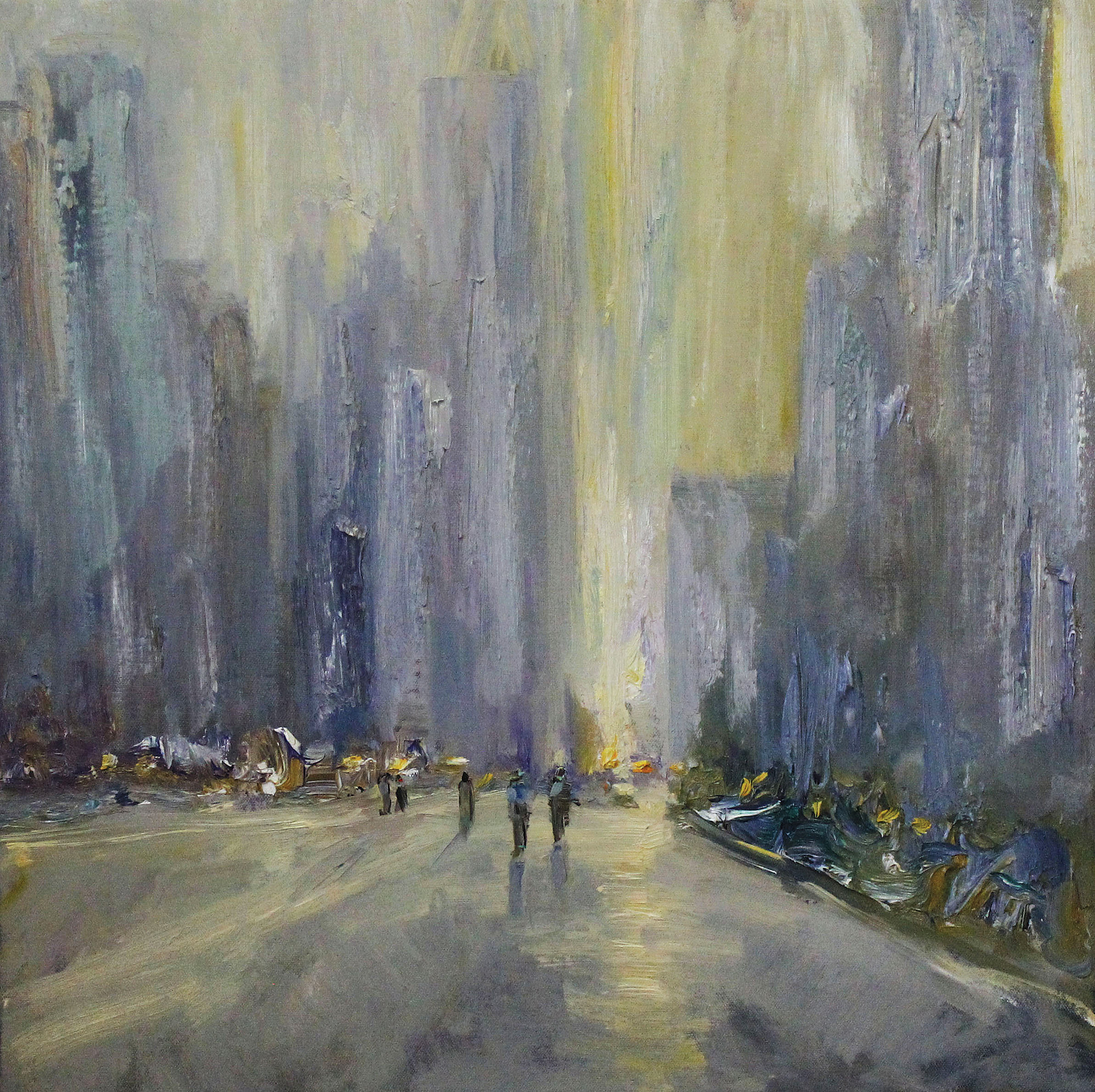 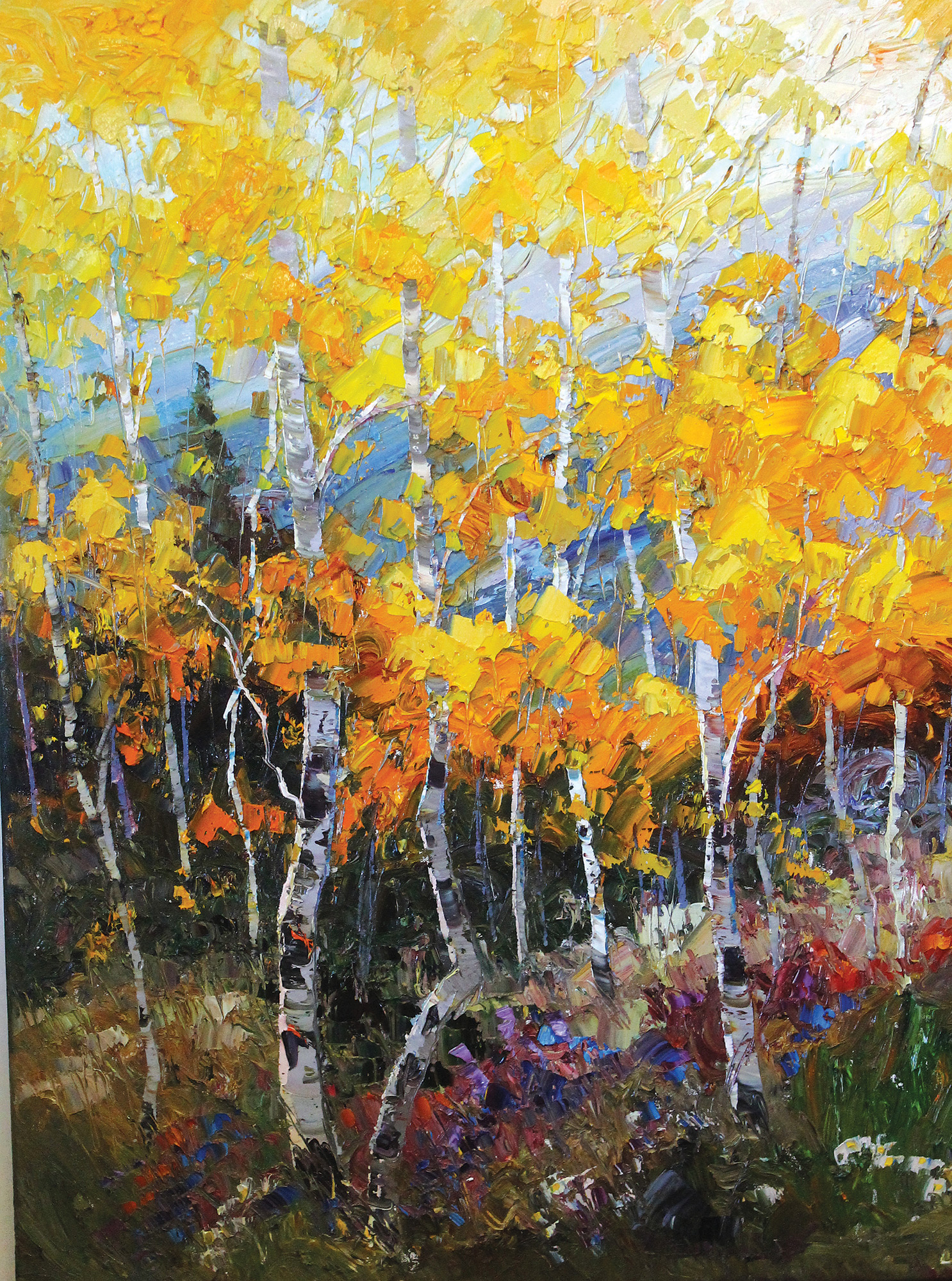 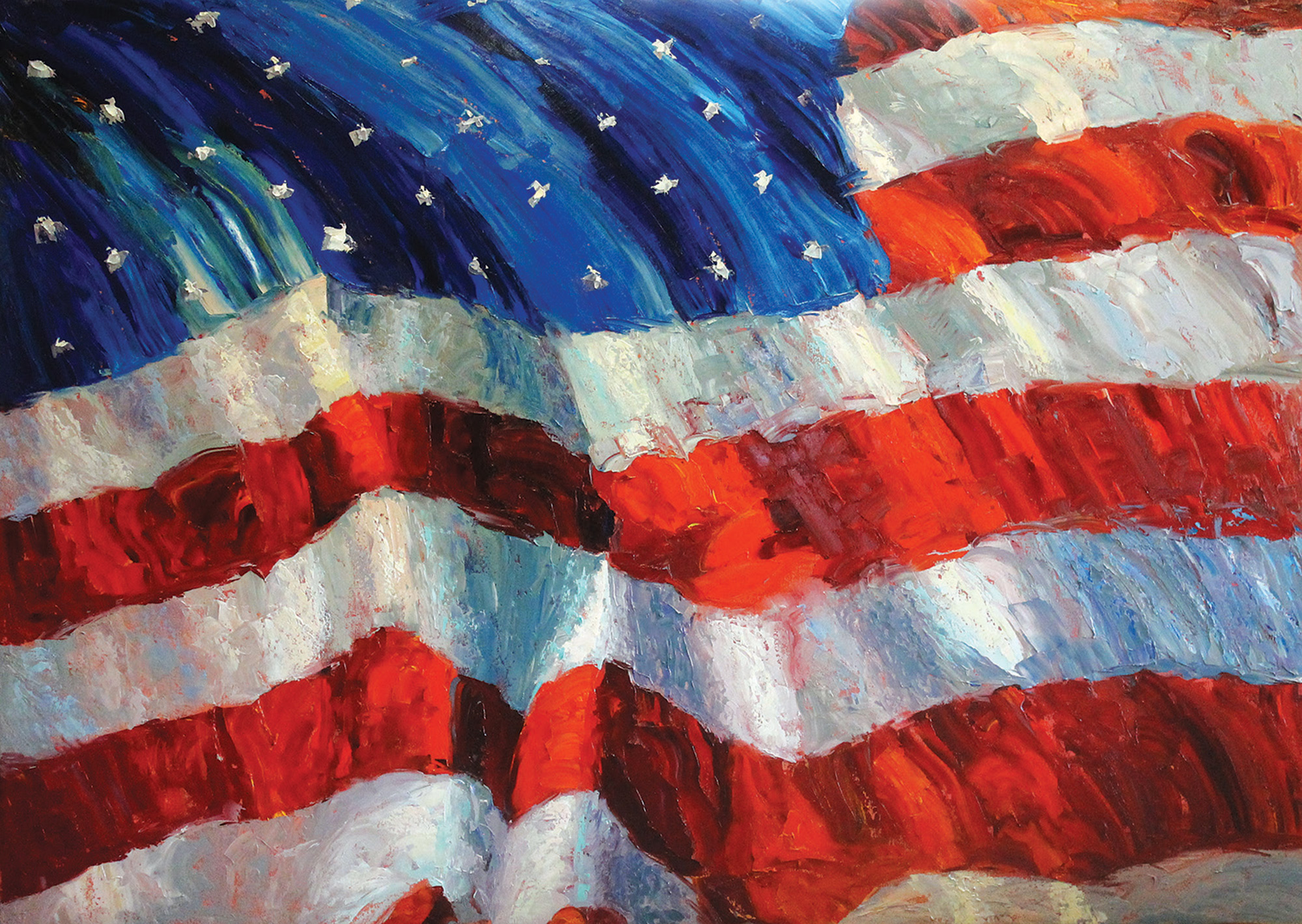 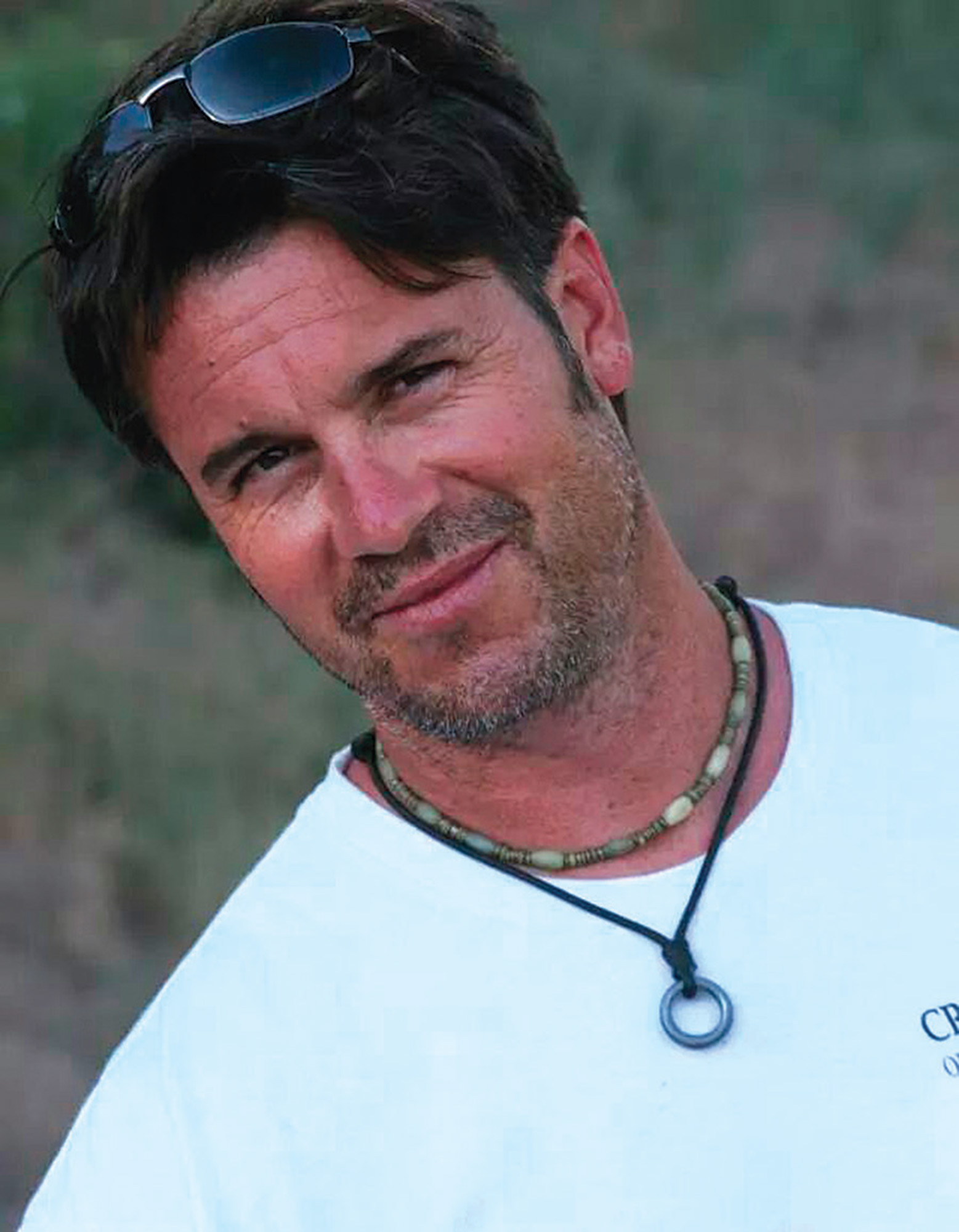