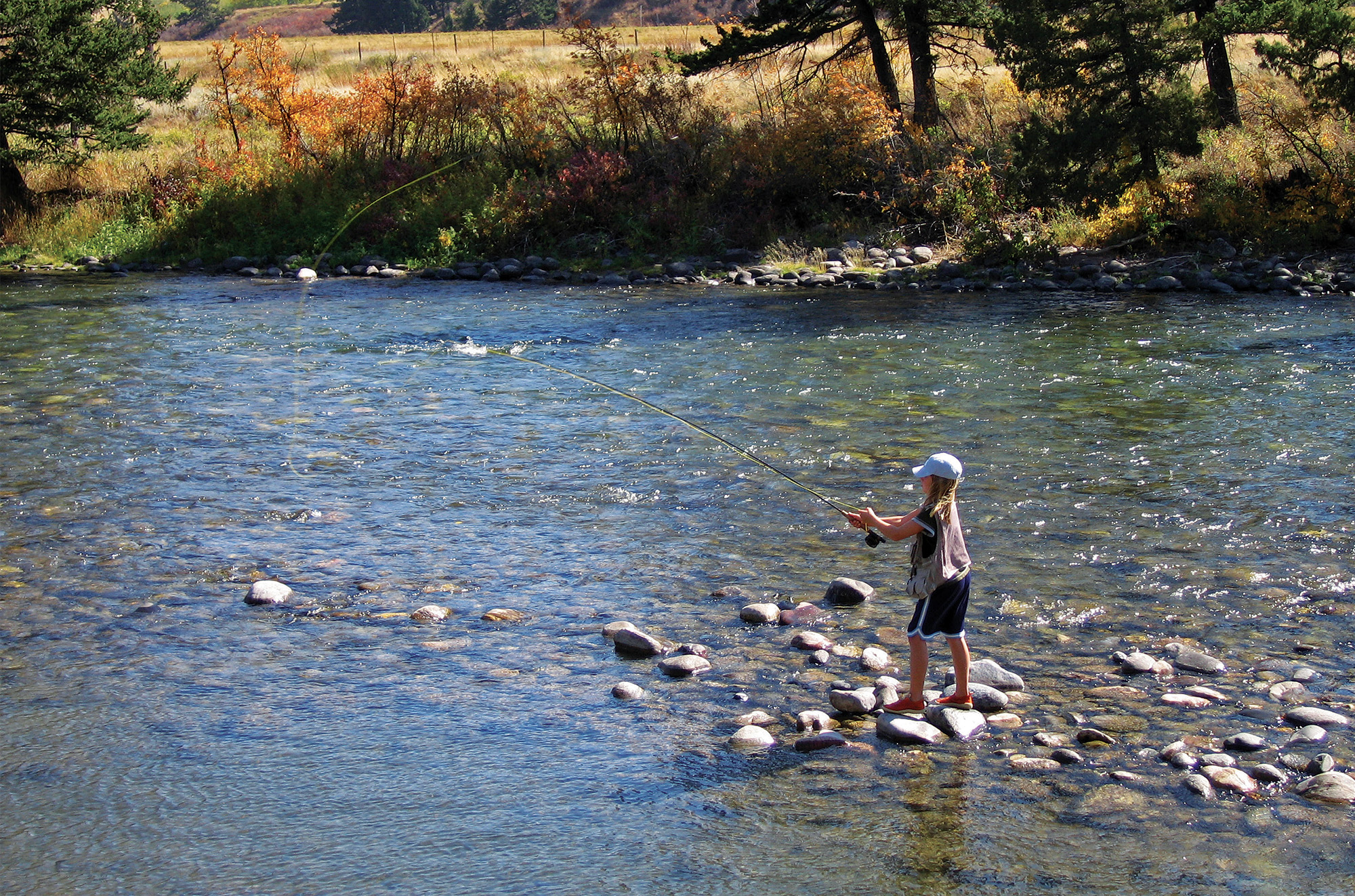 09 Jun Closer To The Source

IF FLOAT FISHING STORIED RIVERS like the Yellowstone is, as the saying goes, “the life of kings,” then wade fishing small high-country streams is the life of peasants — but extremely fortunate peasants. Gone, for the angler afoot, is the drift boat or raft as mode of transport; as carriage for cooler and beverages and bags of tackle; as enabler of long, drag-free presentations. Instead, the wading fisher must bring what he plans to eat and drink and fool trout with on his back, or even his shirt pockets. His pace is often slowed by the current against which he wades, by the pitch of the land, and — in my case, quite often — by having a child in tow.

Having guided float trips nearly 100 days a year for going on 20 years, I relish the late summer dog days when the Bitterroot’s Trico-eating trout get nearly too fickle to catch and one could walk bank-to-bank across the Blackfoot on an armada of inner-tubes. It means I can park the boat in the garage for a few weeks and retreat to upper reaches of the drainages that beckon with cold flows and gullible native trout, perfect teachers for scantly experienced young anglers who are, by their very nature, perfect teachers for a client-addled fishing guide in need of a reminder of why he loves to fish.

Looking for just such a lesson, I took our youngest daughter, Lily, up a tributary of Rock Creek late last July. No wider than our dining room table, the stream has a name, of course, but in print deserves anonymity — not because it harbors a hidden population of underfished huge trout but because the seclusion it affords is its true prize. I’ll call it Rhubarb Creek (because I’d promised Lily a slice of strawberry-rhubarb pie a la mode at a nearby diner following our expedition) and leave it at that.

Its fictionalized name brings me to an aside, the first of my pointers for taking kids fishing: Bring food, lots of it, even the stuff you say no to at home. There is nothing quite like river-hunger, which seems to strike children at the sound of rushing water. True to form, Lily was tugging at my sleeve requesting Cheetos before I had the rod rigged. Additionally, it’s sensible to choose a small stretch of stream to wade — on Rhubarb Creek I picked three good holes — as adult legs can cover twice the ground a child’s can. Next, I always bring a rod and reel that I don’t mind trashing; Lily was free to rake the rod tip through the alders and set the reel down in the sand; if you nitpick their behavior, I’ve found, they probably won’t want to join you the next time you offer. Lastly, we always hunt for critters — frogs, crawdads, and snakes — as diligently as we ply the water for fish: Anything living and wiggling inspires wonder, and that’s what we’re after.
Those are more than enough rules. In fact, when taking kids fishing I adopt an approach directly converse to that of Norman Maclean’s father, who famously thought that his sons shouldn’t be allowed to disrespect a fish by catching it before they’d perfected the basics of fly presentation. I want young anglers to catch as many fish as they can, long before they’ve perfected anything.

To wit: A sloppy downstream roll cast — a flop is fine — that drags across the tail-out of a pool, and a sunken elk-hair caddis twitched antagonistically over the heads of native cutthroat, isn’t a glamorous combination by any means, but it will bend a 7-foot rod held by a 7-year-old child. The “water-loaded” cast is another that would have driven Reverand Maclean mad; to execute it, the caster simply needs to stand at the base of a pool and let an ample amount of line tighten downstream in the current, then point the tip of the rod at the dragging fly before flinging the whole deal upstream over the shoulder. The fly — if not an elk-hair, a Royal Wulff or Trude will suffice — should reach the end of its trajectory high above the water, and list to the water’s surface with a wonderfully unearned measure of grace.

Last July on Rhubarb, Lily dialed in the downstream flop and was tickled with the parr-marked cutthroat that wiggled at the end of her leader. The young fish cartwheeled over her twitched and dragging fly until they finally hooked themselves and tightened the line. She giggled as the rod trembled. After she hooked several fish, I figured Lily was ready for a bigger challenge, and found a foot-long fish rising to a modest hatch of caddis flies. It would have been an easy cast to make — all leader, dangled or dapped from a log — but Lily said she was done for the day.

“Don’t you want to catch a bigger fish?” I said.

“But Daddy, you said,” she answered, illustrating that most attentive young anglers likely will lose interest after an hour or two, no matter how good the fishing.

And so we went for a big slice of homemade pie chockfull of filling the color of cutthroats’ jaw-slashes and a heap of ice cream as white as their bellies, and just as sweet. As we drove home, we passed a ranch and several horses that my middle daughter, Molly, had fed earlier in the summer after we were caught astream in a cold rainstorm. A blue-lipped Molly had been reduced to shivers, so she donned my down coat like a snowsuit and fed several horses that intrigued her, not the least bit miffed that we hadn’t been able to wet a line. It remains a fabulous memory of earth that has nothing to do with fish, and yet would not likely have occurred had we not gone fishing.

It’s no small measure of grace that the places we inhabit physically begin to inhabit our memory, becoming sources of wonder to which we might return.

Fishing with kids In the Northern Rockies

Thoughts from a guide (and dad) who knows

Fishing with a young family, of course, isn’t the same as floating down the Yellowstone with friends or hitting the Gallatin for a few hours by yourself. There’s a level of complication (and accompanying reward) that can take parents by surprise. Patrick Straub, owner of Gallatin River Guides, is five years into being a father, and has learned a few things along the way.

When do kids need licenses?

It’s up to you. Many of us learned to spin cast first. If you think your kiddo is ready to learn to fly cast, the Echo Gecko is the best all-around entry-level fly rod, and your little angler will enjoy the bright yellow color and lizard rod art. Pick out a 4- or 5-weight fly rod and pair it with a simple fly reel, such as an Echo Ion. The rod has a small fighting butt which helps smaller hands when bringing in the big one. Teaching a young one to fly cast is often hard on mom or dad, so be sure you’re ready, and have a good reserve of patience.

Combine kids, water, and hooks flying through the air, and you have potential for drama. Reduce the risk by taking some precautions. If you’re fishing rivers, only fish during lower flows. If you’re fishing from a boat, kids under 12 must wear a personal floatation device (PFD). If you choose to float a river, be honest about your rowing ability — when a child is onboard is not the time to learn to row. Rivers can be dangerous at any flow. It is never a bad idea to have them wear a PFD if fishing from shore. A hat and a pair sunglasses may prevent any errant hooks from getting into an eye. Dress for the weather, and always tell someone where you are going and when you plan to be back.

Bring a small pack filled with some basic essentials. Ours includes sunscreen, extra clothing (kids get wet when fishing), granola bars and snacks with protein, plenty of non-sugary beverages, a camera or phone with a camera, pens and paper for making a map (my kids like to make maps of our fishing locations, to include any places for possible buried treasure), a small bag for collecting rocks or other goodies, and a large garbage sack (always plan to pack out what you pack in and set a good example by picking up litter).

Even if the catching is great, most kids won’t want to fish for more than a few hours. Choose a location with other handy distractions. If you’re floating a large river, choose one with islands or plenty of public access to allow for rock skipping contests, petrified wood hunts, or games of capture the flag. If you’re on foot, look for nearby hikes. And keep in mind locations that have an ice cream stop on the way home. A Carousel for Missoula in Missoula and Goody’s Soda Fountain and Candy Store in downtown Boise both are minutes away from good fishing on the Clark Fork and Boise rivers, respectively. 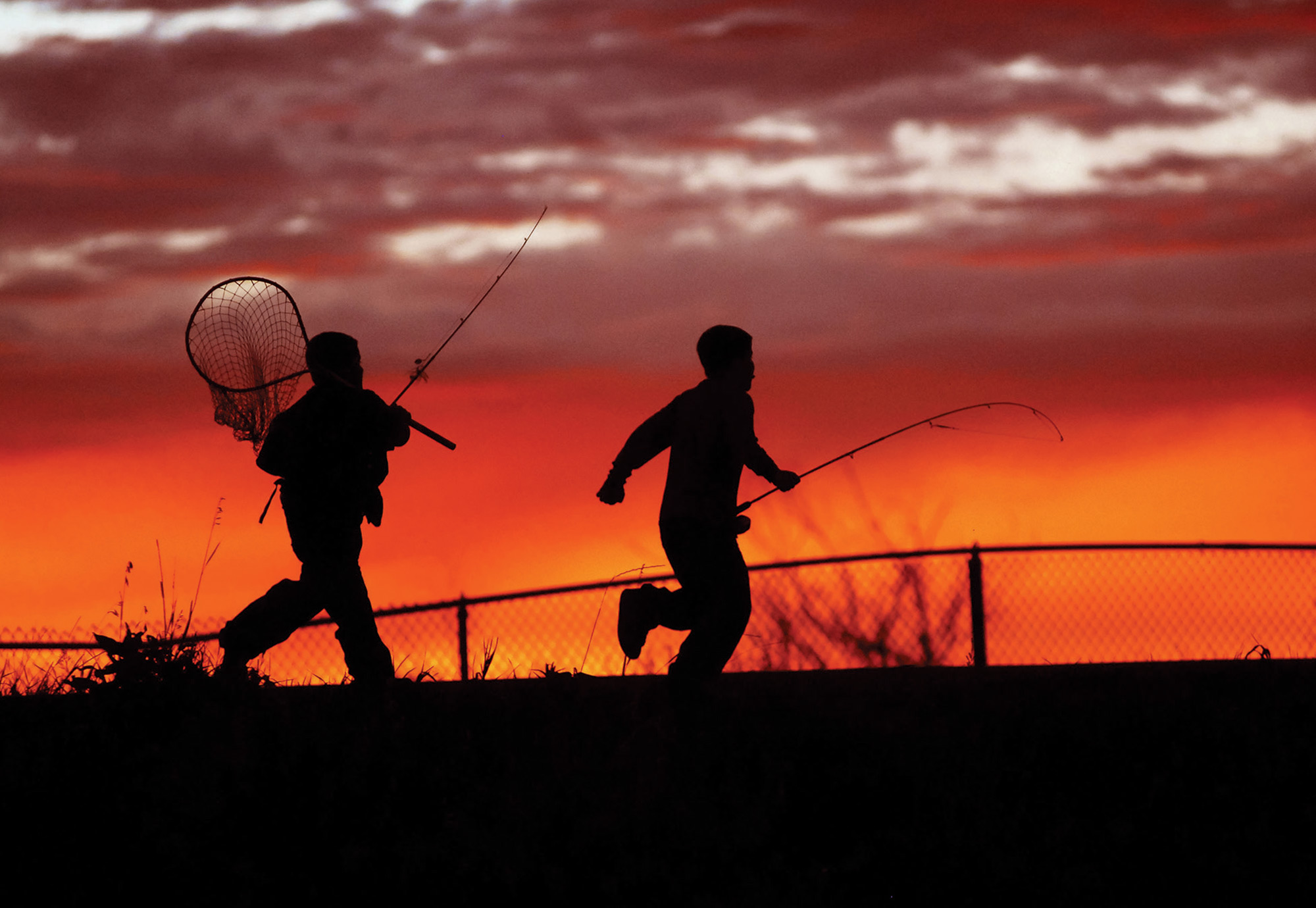 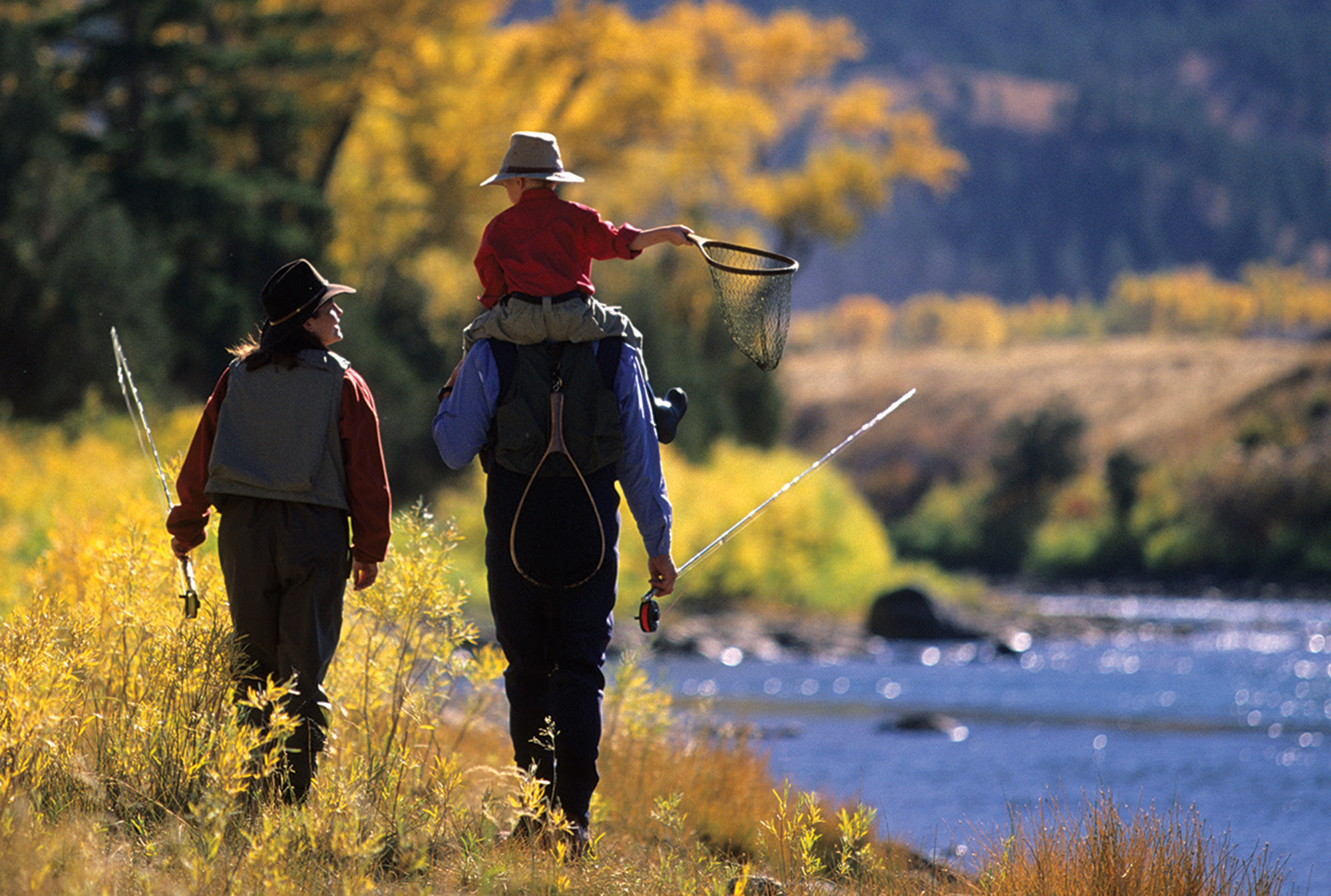 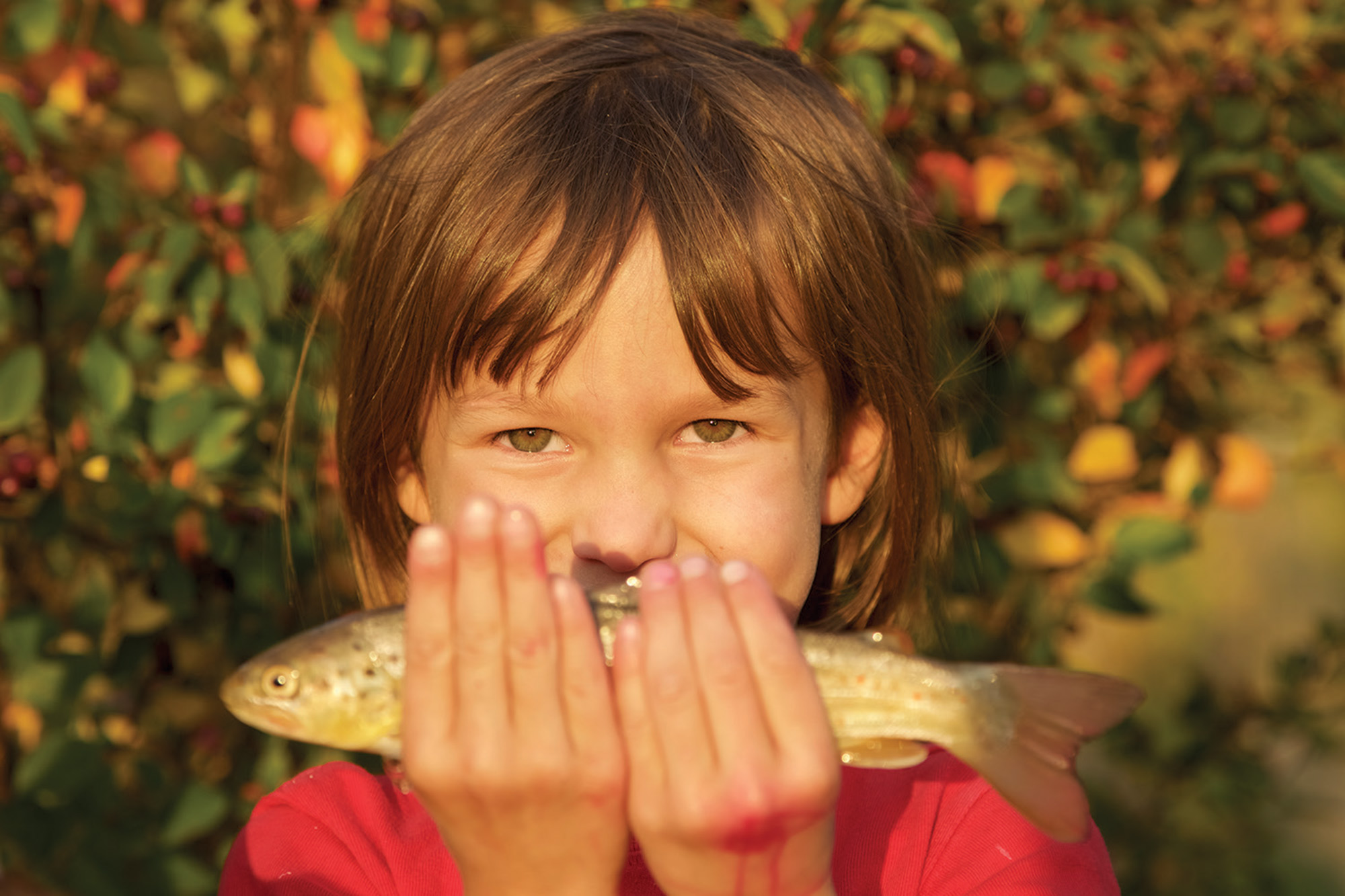 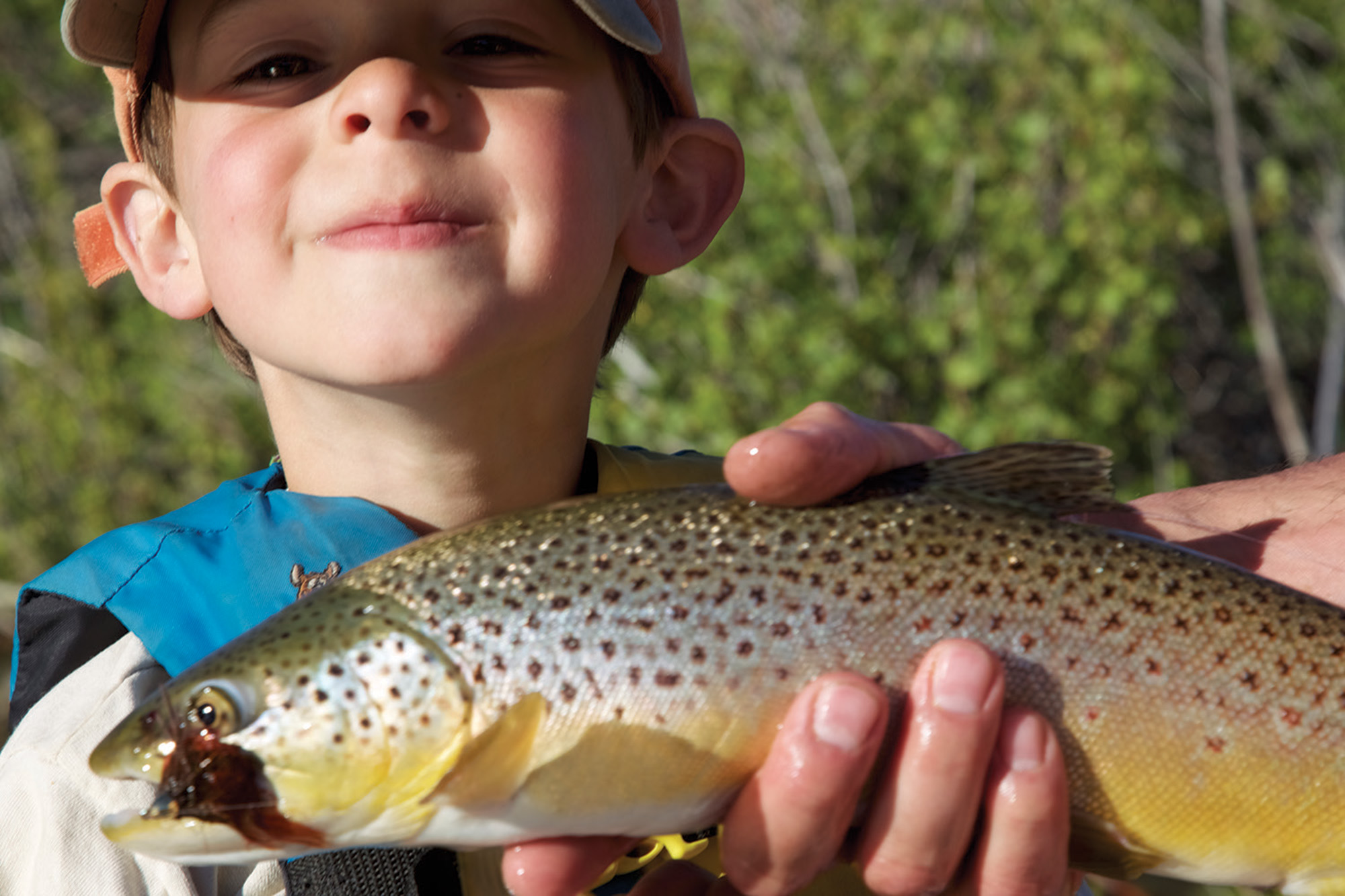 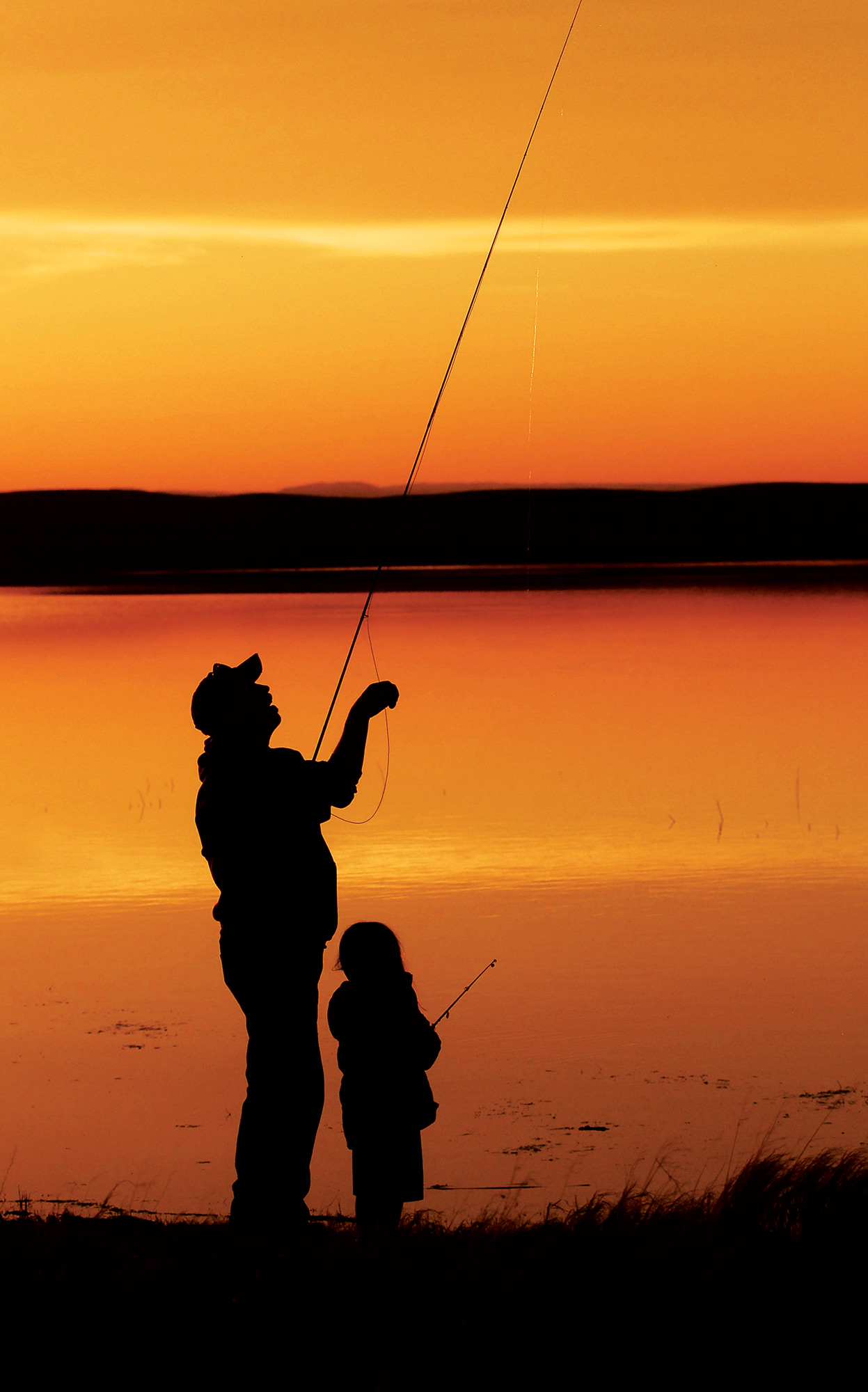 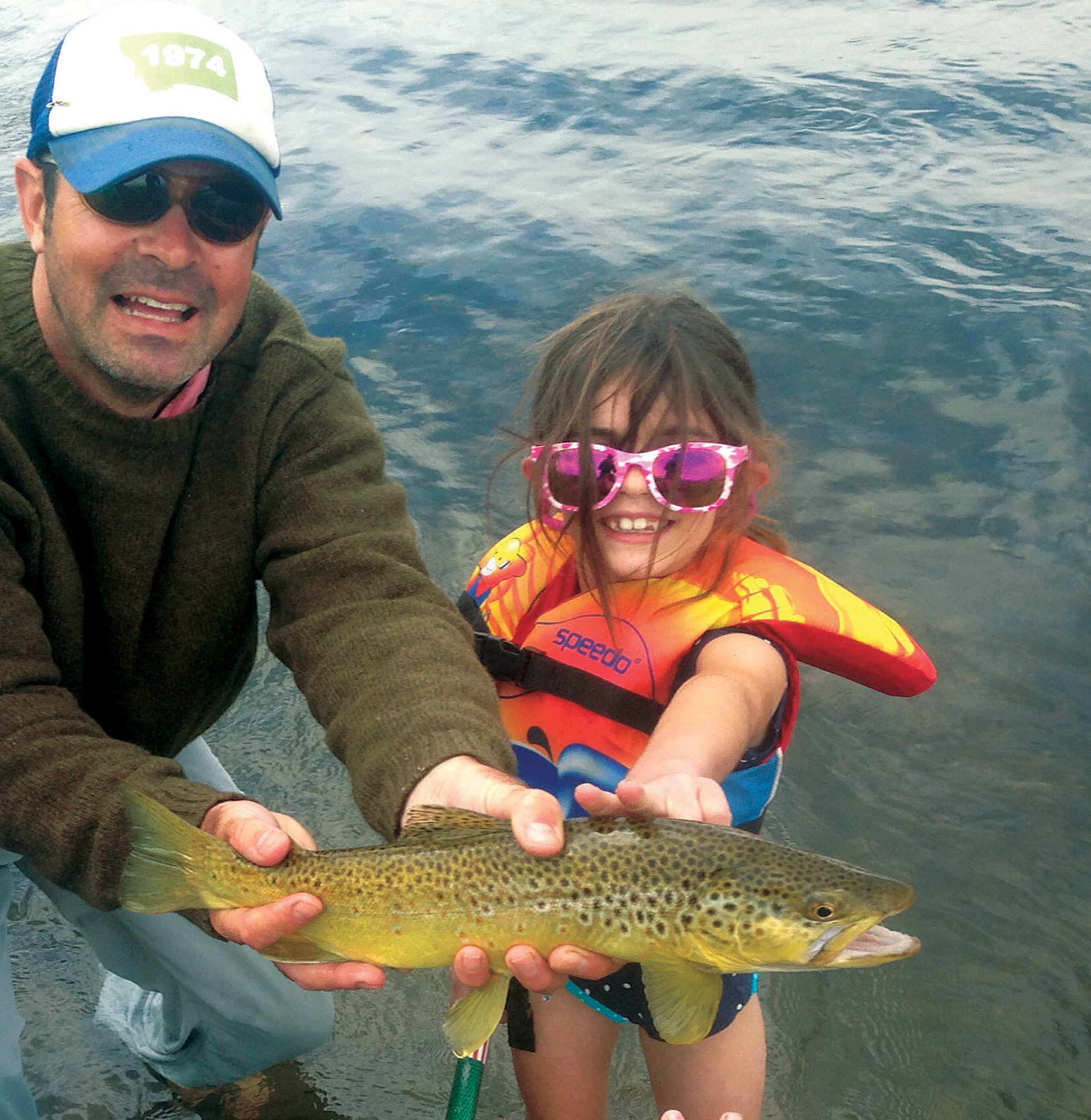 Author Chris Dombrowski with his daughter, Molly, and a nice brown trout.