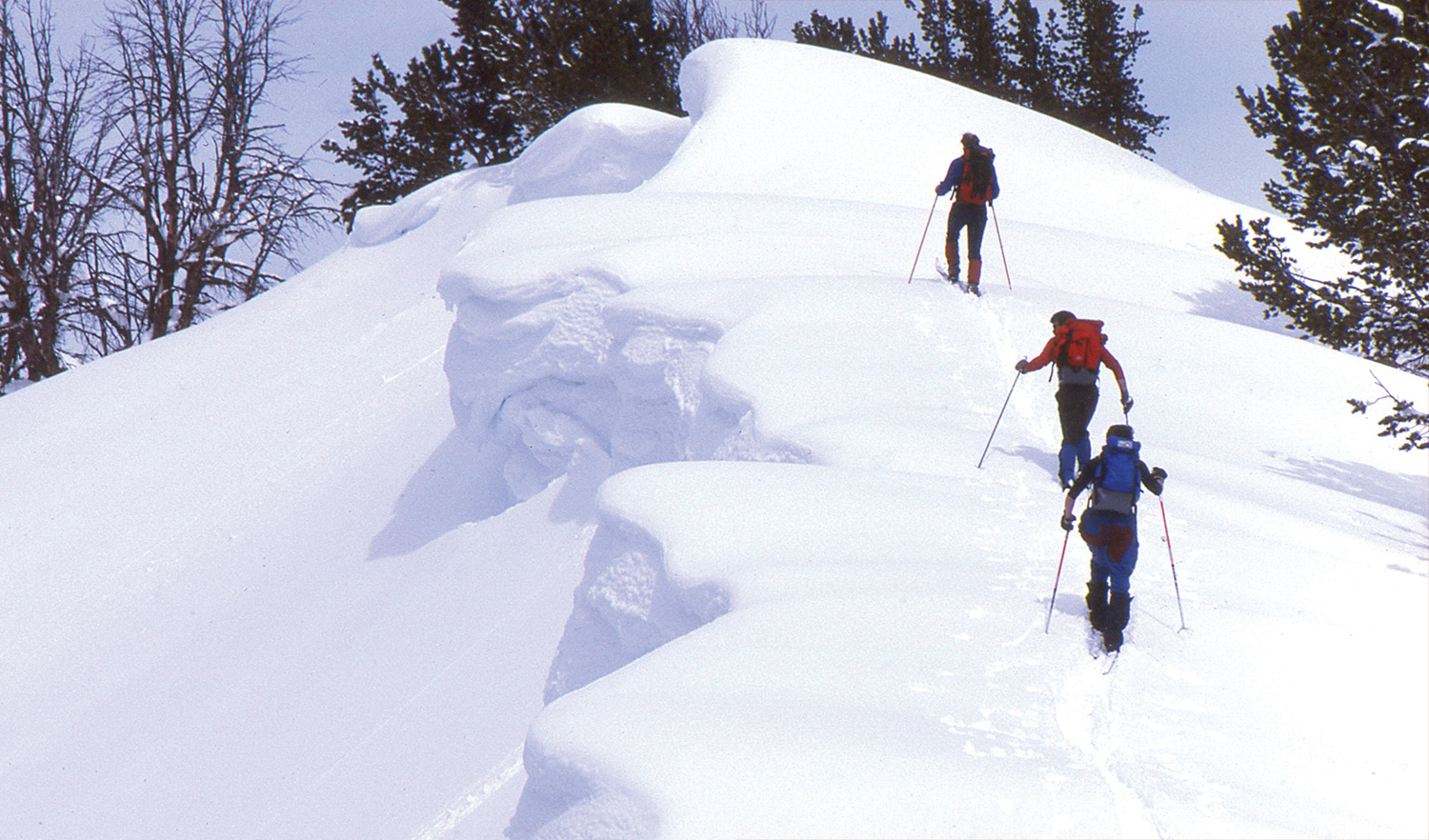 In the late 1980s, the author and his friends explored the ridge between Beehive and Bear canyons near Big Sky, Montana.

I’m skiing in the backcountry, up Bear Canyon east of Bozeman or along one of the Yellowstone Park trails off U.S. Route 191 south of Big Sky. Much of the time I have the trail to myself, but occasionally I’ll run into someone. They approach. I see them assessing me — my outfit, my older boots, my skis.

“Wow,” they’ll say, motioning down at my 25-year-old skis, “those are classics!” 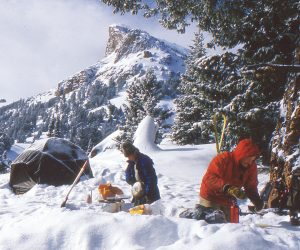 Then I’ll see their mental wheels turning. The words won’t quite make it out of their mouths, but I’ll know what they’re thinking: Yeah, and you’re pretty classic too … in the ancient-and-vintage sense of the word.

I’m getting vintage enough to pull off being classic, and slightly in-your-face about it. Nobody really expects cutting-edge gear, clothing, or technique when you’re on the Social Security end of the spectrum. Frankly, I embrace that status. It gives me some latitude on the trails.

Turns out that I had a good role model in my mother for this quirky predilection. She thought nothing of lacing up her battered leather ski boots, strapping on a pair of 8-foot-long wooden boards, and taking off around our suburban neighborhood after a fresh snow, leaving a curious ski track down the sidewalks, across the local golf course; just being out in the fresh winter morning while everyone else hunkered down inside or struggled to clear their sidewalks.

At the time I found her antiquated winter peregrinations painfully embarrassing, but the older and less fashionable I get, the more I appreciate her example and her verve. She just liked getting out. She reveled in the winter’s beauty. So what if her gear belonged to the previous generation? It worked fine when it was new. It still worked fine. If someone wanted to make fun of her, that was their problem. She was going to enjoy the day. 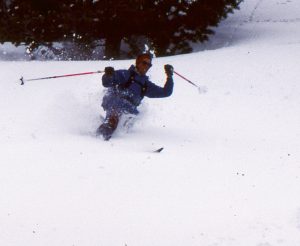 That was 50 years ago, give or take, and in that goes-around-comes-around way, I find myself in similar straits. But a lot has changed, and the change keeps accelerating. Being antiquated is still part of the picture, but these days, that’s the superficial layer. More and more, it’s something a good deal more profound. Now, it seems to me, it centers on how to be outside, winter or summer. Over the past couple of decades, the experience of being outdoors has morphed.

Not very long ago, I girded up for a winter outing by packing a lunch in a hipsack, heading out to a trailhead, and skiing for the day. All day. Sometimes alone, more often with a pack of friends, I explored up drainages, traveled ridgelines, made turns through gentle meadows … Beehive Basin, Specimen Creek, North Cottonwood, Fawn Pass, Bear Canyon, the Sphinx. Along the way we’d find a log to sit on and eat lunch. Maybe we’d make a fire or boil up some hot drinks. Sometimes we’d break trail through deep snow, taking turns, working hard; sometimes we’d glide through the miles almost effortlessly. There were hilarious descents punctuated by face-plants, sweaty climbs, snow bridges across creeks, deadfall to get past, the tracks of elk and fox and owl wing prints telling stories in the fresh powder. Austere winter beauty surrounded us in the hush of that blanketed season. 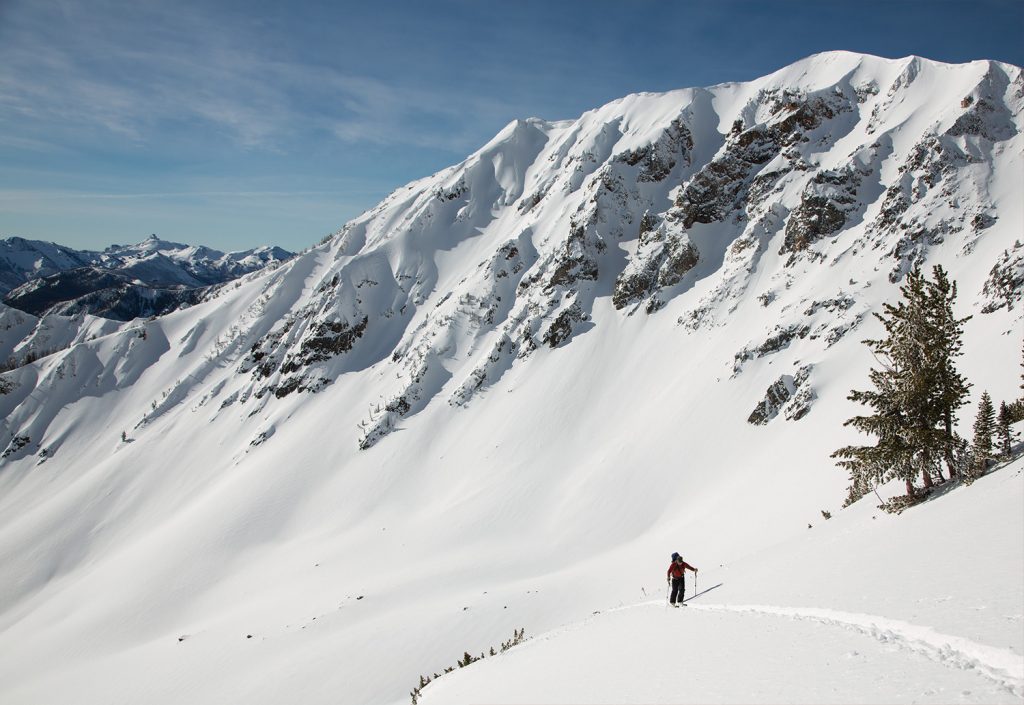 If we were ambitious and had the time, we’d go winter camping for a few days. You know — load up a heavy pack, pitch tents, dig snow kitchens, endure the long and bitter nights sleeping with boots and water bottles. We studied our paper maps, navigated trails, often got a little lost. Admittedly, it could be a little more like survival than camping, but it got us in deep where the stars glittered sharp in the black sky, meadows lay pure and white under undulating fields of snow, and trees popped in the cold. For that time in the backcountry, we were cut off from civilization. If a world war had started, we’d never have been the wiser.

These trips stand out sharp and clear in my memory.

The snowshoe expedition I took with my dad and brother (back before we knew better and transitioned to skis) along the Heart Lake Trail and south down the Snake River in Yellowstone National Park. The powder was 3 feet deep. The nights went to 30 below and lasted forever. The days were so short it seemed like we’d barely had lunch before we had to think about setting camp. Brutal, in a way, but also quiet enough that we could hear our own hearts beating; full of moments in geyser basins dotted with elk, the satisfying wake of our trail winding back across an austere meadow; the quiet exultation of that loneliness, culminating with a frigid ford of the Snake River. Forty years later I can still see those star-stuffed night skies, feel the labor of breaking trail, relish the companionship of our family threesome hunkered around a snow kitchen. 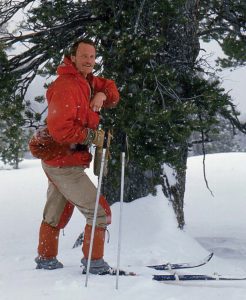 Roughly 30 years ago, the author modeled his patented look in the backcountry.

Or the trip Marypat and I took with another couple, traversing the Madison Range, telemarking the slopes below the Sphinx, dipping a pot for water from the precarious perch of a snow bridge, playing spades by candlelight in the tent.

Sounds old-timey as all hell, I suppose. Because these days, I’m not sure that anyone is doing that stuff.

It’s all about exercise now, scheduled into a day like a business meeting. Ski trails are groomed. People are suited up head-to-toe in Lycra or Spandex. Everyone has some sort of heart-monitor-fitness-watch-GPS gizmo. Being outdoors has become a competitive enterprise analogous to going to the gym. Better than the gym, for sure, but still. Outdoor activity is shoehorned into the day’s other appointments. For an hour or two people don their ski outfits, clip into their expensive skate or classic gear, start their fitness monitors, and zoom off. All the while they are checking their cardio output, their elevation gain, their fat-burn, and their calorie expenditure.

Add to that the proliferation of electronic distraction devices that have become physical appendages, with outdoor clothing designed to accommodate them, and the interaction with the outdoors recedes into distant scenery going past like a mural while your favorite music, or Spanish lessons, or a political podcast entertains you. Inevitably an important text or Instagram post or news event will interrupt your ski time.

Then, afterward, you plug your watch into your computer to get the metrics of your outing — calories burned, fat melted, heart-rate spikes, hills climbed, time moving versus time resting — before meeting friends at the local kombuchery for a fermented glass or two and spirited comparisons of your heroic outdoor exploits, with printouts to prove it. You can’t help but think that maybe, just maybe, there’s a point that’s being missed.

When it comes to the outdoor activity watershed we’ve crossed in the last few decades, what the hell happened?

It’s important to provide a little context. For one thing, in a place like Bozeman, we don’t live like most people do. We happen to be in one of those exercise epicenters that dot the West — places like Bend, Oregon, Sun Valley, Idaho, Truckee, California, Steamboat Springs, Colorado, and Jackson Hole, Wyoming. If you landed in one of these places from outer space you’d think that all Earthlings live in Spandex, go to yoga, frequent brew pubs, are tethered to glowing screens, obsessively monitor their bodily functions, and indulge in repeated masochistic bouts of sweaty, arduous activities. 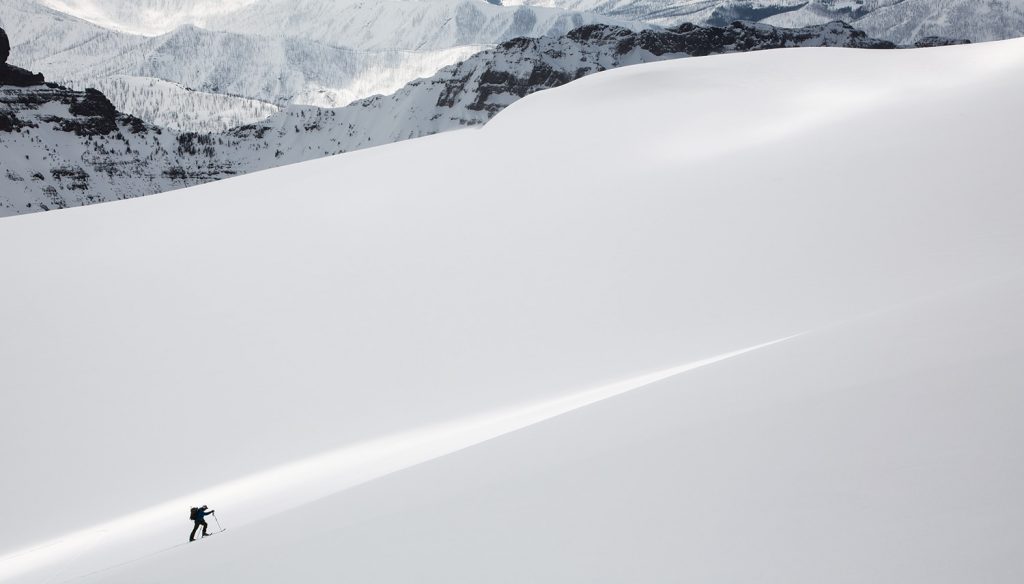 Not that long ago, was it?

So maybe it isn’t surprising that the same profound sea change has swept over our winter activities. We live, now, in a constant, distracted state. Electronic gadgets demand our attention, dictate our choices, and nag us if we ignore them, all under the guise of convenience and luxury and leisure.

Who has more free time, more discretionary income, an easier time making ends meet, less details to fret over, and fewer maintenance chores than they did 20 years ago? Nobody I know.

Why should it be any different when it comes to skiing down the trail?

I know, I’m an old fart lacking the imagination to embrace the future and too cheap to keep up with better equipment. Guilty. And, truth be told, I’m not immune to the effects of the new order. I use online maps. I Google destinations and trip descriptions. I find myself fitting in an hour of exercise on groomed trails when my schedule is busy. I appreciate some cutting-edge gear, and I’m as curious as the next guy about how far I skied.

But when I catch myself edging too far into the new reality, I remember my mom, out there on a fresh-snow morning, blithely unconcerned about her antiquated appearance. And I’m reminded how sweet it is to be classic and proud.