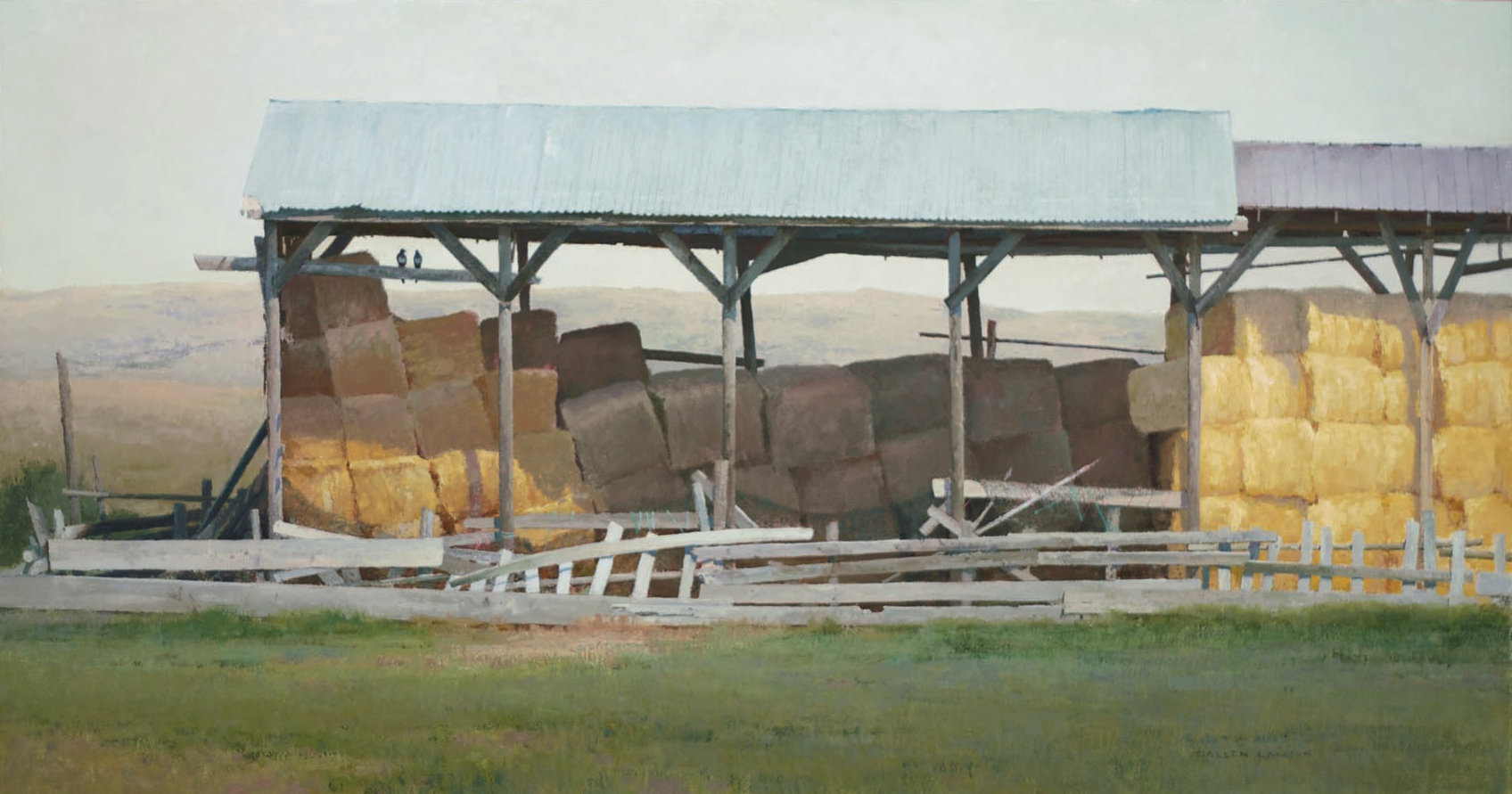 26 Aug Celebrating the Sentient Beauty of the Animal World

T. ALLEN LAWSON HAS NEVER BEEN especially prolific as an oil painter. Whenever more than a handful of new works surfaces together en masse — a rarity these days — they usually command attention. So it is again with Lawson’s first major solo exhibition in the West in 6 years, titled Neighbors, being staged September 18 to October 18 at the Simpson Gallagher Gallery in Cody, Wyo.

Nearly 20 studio paintings, drawings and field studies are slated to hang at the gallery, located across the street from the Irma Hotel, the historic inn that Buffalo Bill built. Neighbors marks both a departure for Lawson and a re-embracing of subject matter that first fired his passion at the dawn of his career: animals. All of the works portray either wildlife or creatures associated with pastoral America.

There are chickens, horses, dogs, sheep, deer, songbirds and avian scavengers. “One of the things I admire so much about Tim is that he has never been bored, never been captive to tedium. He paints what is around him, even the things that we would take for granted, but there is something about his perspective, his point of view, that makes them become extraordinary,” says gallery founder Susan Simpson Gallagher.

“With these depictions of animals,” she adds, “they aren’t scenes that a farmer would portray; these are about a fine artist who lives with animals and wants to tell us about their beauty in his life. What’s amazing is how varied his portrayals are.”

To say that Lawson’s much-anticipated show marks another homecoming for the native of Sheridan, Wyo., is somewhat misleading. For the past year, Lawson has inhabited a different kind of physical and intellectual space. He and his wife, Dorie, and their children have been living in Austin, Texas, wanting their clan to experience an adventure together before the kids are out of school and gone.

Interestingly, it has been a sabbatical back to the very West Lawson left more than a dozen years ago when he became an expatriate in Maine, needing distance and perspective from the very province responsible for turning him in to a highly-regarded American landscape painter.

Late in June, the Lawsons returned to their farm outside of Camden. “We’re not ready to give up Maine yet. It’s been terrific for us,” Lawson says. “And I will admit that I’ve missed my old studio.”

Indeed, Lawson’s lair is a creative space to behold, a rustic airy sanctuary that rises to cathedral ceilings and is bathed in natural light and feels ancient, as if from a time two centuries’ past. He often closes the night out here.

Lawson will sometimes have between six and eight paintings going simultaneously, some that will never leave the premises and join stacks of quick sketches he made outdoors.

“It takes me a long time to distill what I want a painting to be about,” he says. It’s a process, he explains, of putting enough pigment on the canvas, and manipulating it a little bit, then adding layers while always fighting to get back to that split second of inspiration that flashed in the eyes and registered in the brain.

He will layer up and sand back down again to try and achieve an effect that is akin to grasping the smoke in the air.

“If someone had told me 20 years ago that I’d be using Q-tips and toothpicks and wire brushes and garden tools and sticks to help me create surface texture, I would have laughed,” Lawson says. “I am trying to do what feels honest to me and I can’t paint any other way.”

“He is a thinker,” says artist and friend George Carlson. “What I enjoy most is that whenever we discuss painting, he’s not after the easy solution. He plays with an idea, mulls it over, experiments, struggles. He keeps working it until he has it figured out, and then, when he puts it down, it is done with such clarity — never a hint of labor — that you think, ‘By God, how could it be any different?’”

A two-time recipient himself of the coveted Prix de West award — and the only artist ever to win it as both a sculptor and painter — Carlson is not known for doling out gratuitous praise. But in Lawson he says he has found a kindred spirit.

During the late 1980s, Simpson Gallagher, then a mere twenty-something, was tapped to be the first curator at the National Museum of Wildlife Art in Jackson, Wyo. Along the way, a lifelong friendship with Lawson [b. 1963] started to evolve. She introduced him to her art-loving parents, U.S. Senator Alan K. Simpson and wife, Ann. That, in turn, led to a fortuitous break in Lawson’s career.

While studying with renowned artist Ned Jacob and attending the Lyme Academy of Fine Art in Connecticut, the American Academy of Art in Chicago and the College of Santa Fe, Lawson fell in with a close-knit group of plein air and studio painters that helped lead a late 20th-century resurgence of respect for Western landscape painting.

Seeing Lawson’s work, Ann Simpson set up an informal viewing at a private building across the street from the U.S. Capitol in Washington D.C. A group of small landscape paintings portraying Wyoming sold out. Some of Lawson’s collectors came to include both of the Presidents Bush, the late U.S. Senator Ted Kennedy and George Schulz, former Secretary of State during the Reagan years. “Occasionally I run into George [Schulz] and he’ll ask, ‘How’s the kid doing?” Alan Simpson told me recently. “Lawson’s work leaves an impression on people.”

Major pieces by Lawson are found in public collections as varied as the Whitney Gallery at the Buffalo Bill Center of the West, the White House, The Yale University Art Gallery, the Denver Art Museum and the Portland [Maine] Museum of Art.

“In the early days of Lawson, he was much moodier. When he was down he painted best. How he painted was the antithesis of his internal landscape. Tim became more grounded, more centered, when he married Dorie and they had children, but his ability to express what’s churning inside didn’t go away or become tempered; it has intensified,” Simpson Gallagher says. “And I think that’s what strikes a cord in viewers.”

Art critics said the same thing about the Realism of the late Andrew Wyeth [1917-2009] whom Lawson met and admired in Maine. And it has been noted that Wyeth’s son, Jamie, also a force in natural Realism and a friend of the Lawsons, has for years taken risks and captured acclaim for his animal paintings that read as allegories.

In his own solitude, Lawson says he has come to appreciate more than ever before the companionship animals offer as sentient beings. In winter from the vantage of the Lawson place in the woods, only one light is visible from the nearest human residence. When the foliage erupts in summer, they are enwrapped in their own secluded Eden.

“But I never feel alone. I’ve just started to see the animals sharing the space in a different way than I had before. Once you put living, non-human things in a composition, it changes everything.” he says, explaining that the title of the show came from noticing the resplendence of birds in the trees and their banter.

Indeed, nature is speaking to his psyche. In recent years, Lawson’s experimentation with Impressionism bordering on abstraction became evident in a recent series of works that examined the gnarled textures, shapes and patterns of bark on standing live trees. As subject material, tree bark may sound mundane, but not in Lawson’s handling, Simpson Gallagher says. They actually were visually gripping and soothing at the same time.

Chuck Neustifter, the Simpson Gallery director, has been observing Lawson’s evolution for a long while. “I’m always attracted to Tim’s paintings because he adds a level of depth to his landscapes and he is doing the same thing now with animals,” he says.

Neustifter, an avid birder, points to a Lawson painting of crows. “He is able to capture them without losing the life quality of his subjects and on top of it is able to go further,” he says. “It’s not just the play of paint or subtle reflection of sky on the feathers, it’s something that is unexplainable. That’s what I look for in great paintings — the unexplainable.”

What Lawson seeks to make, George Carlson says, is a pure authentic statement of personal conviction. He tries to make sense of truths that linger in moments and are there to be ascertained by viewers open to receiving them. “The trap that some very talented painters throughout history have fallen into is that they become comfortable and their work ceases to be interesting,” Carlson says. “Tim Lawson is constantly probing and I admire the hell out of him for doing it.” 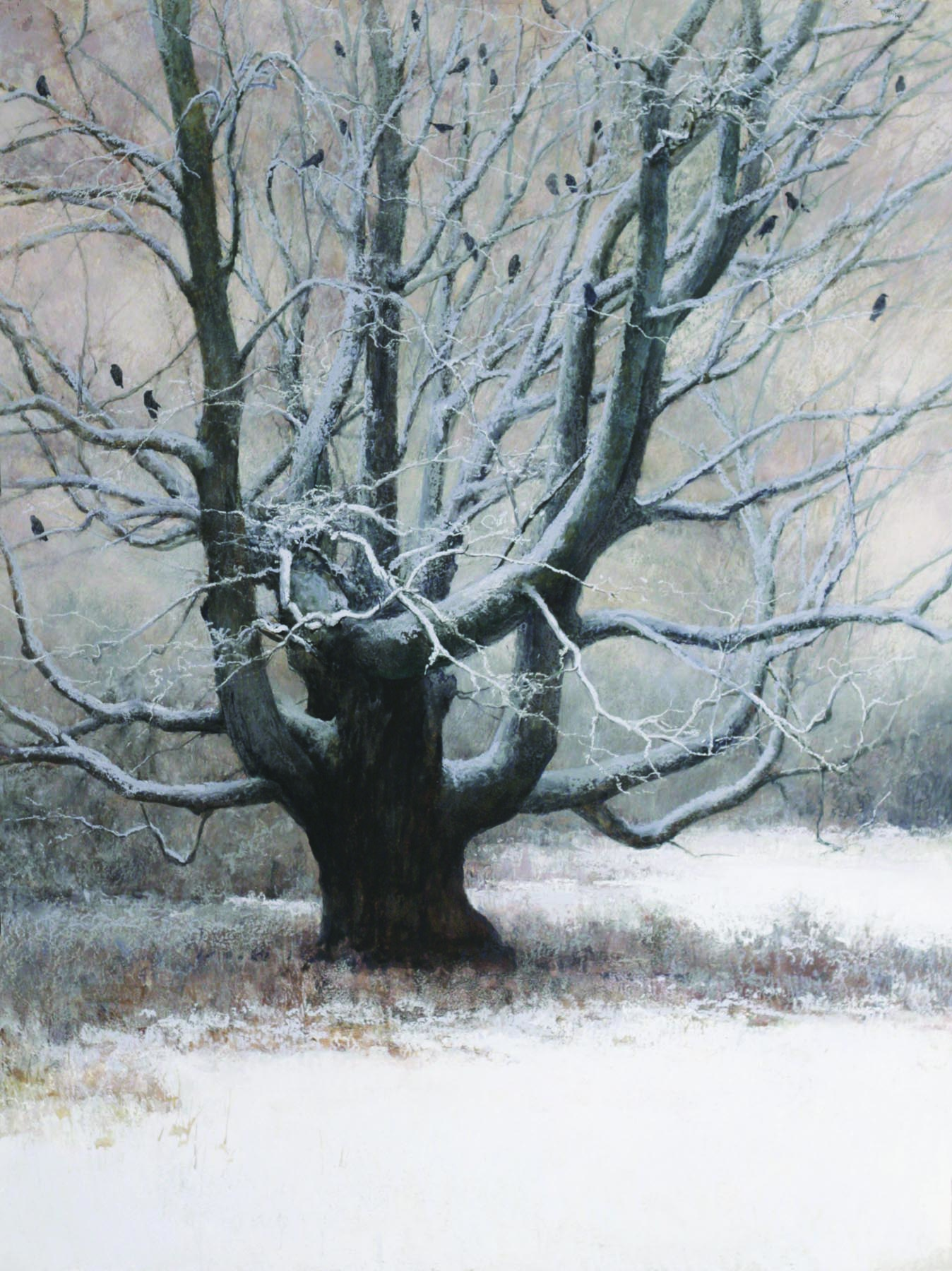 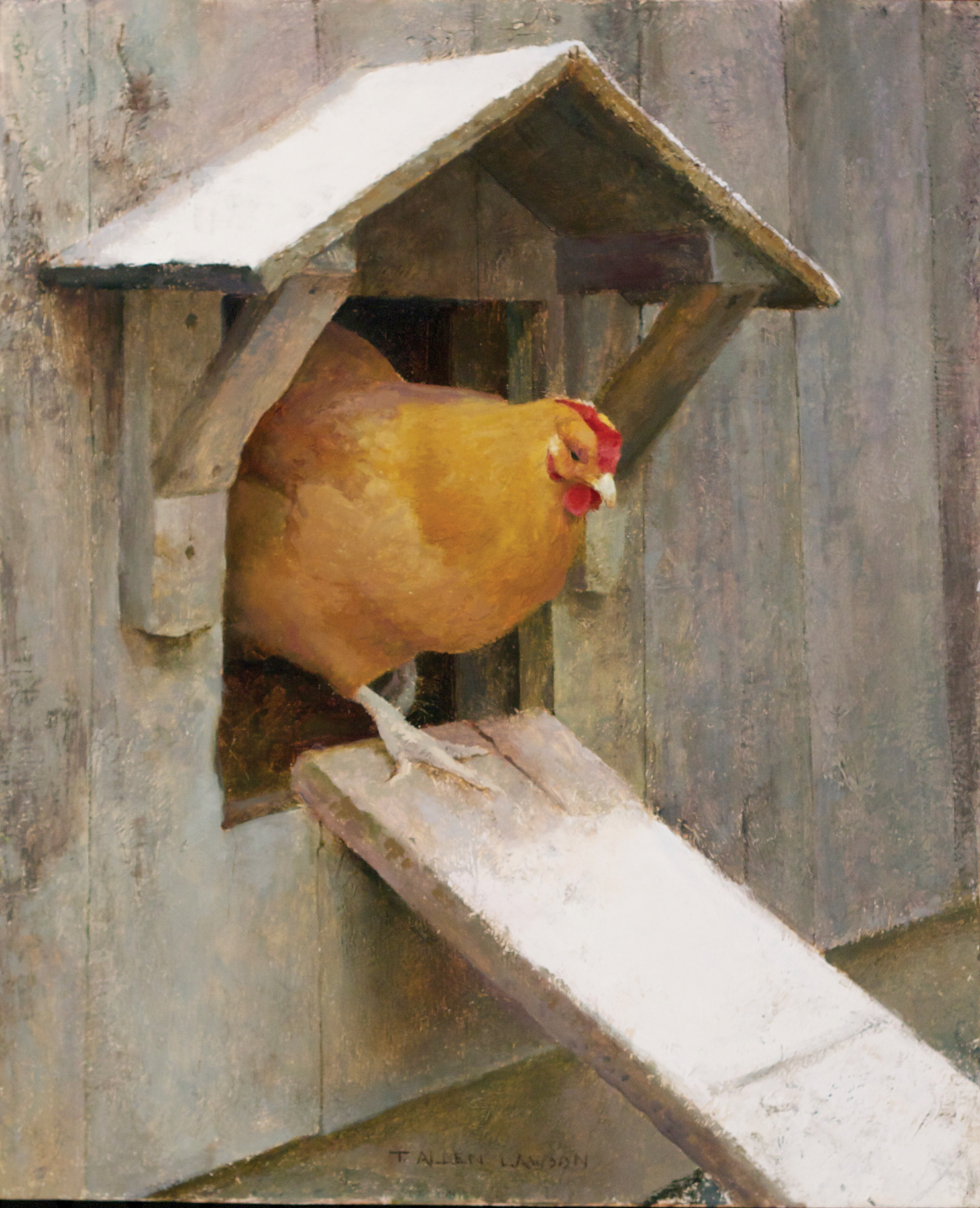 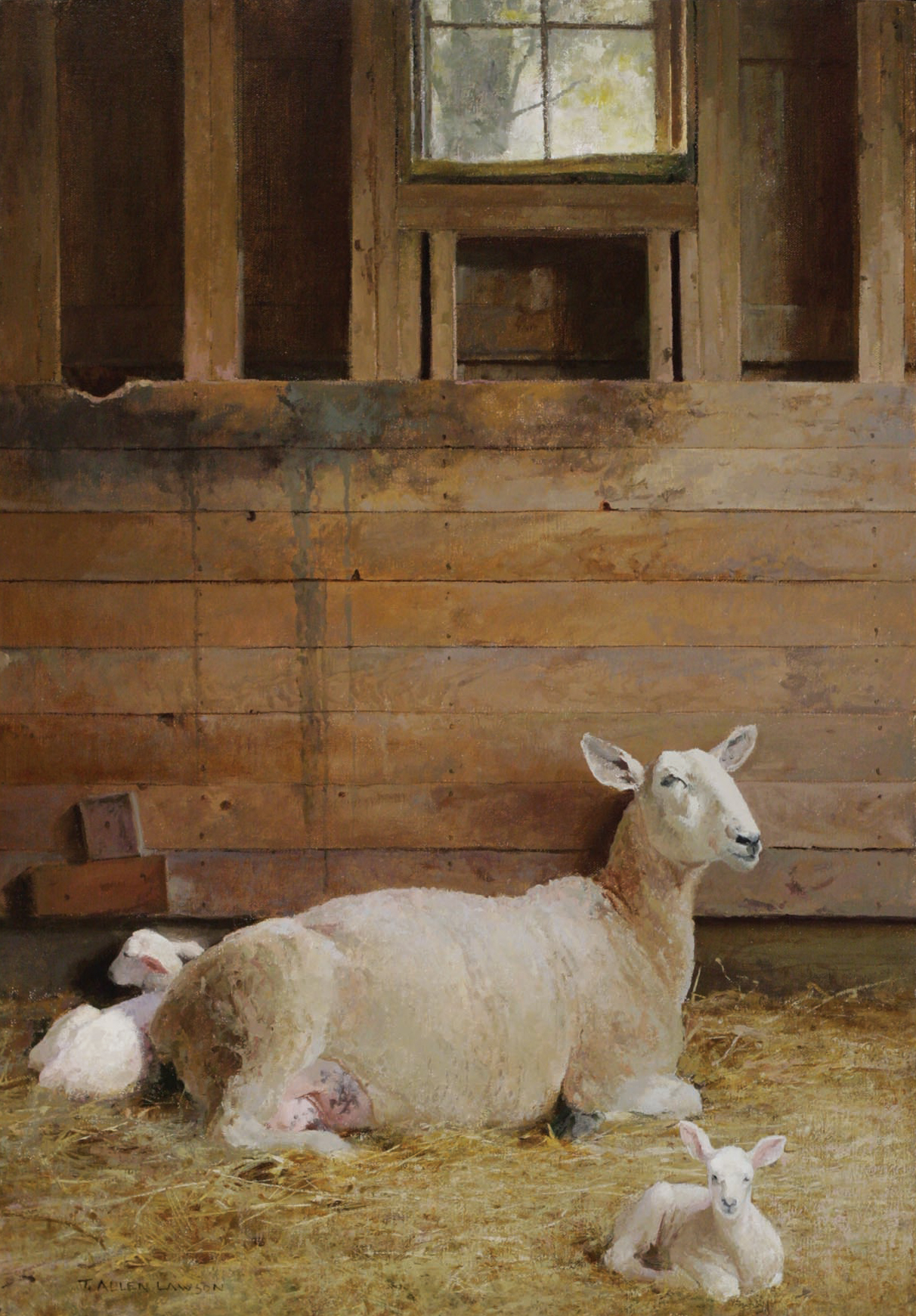 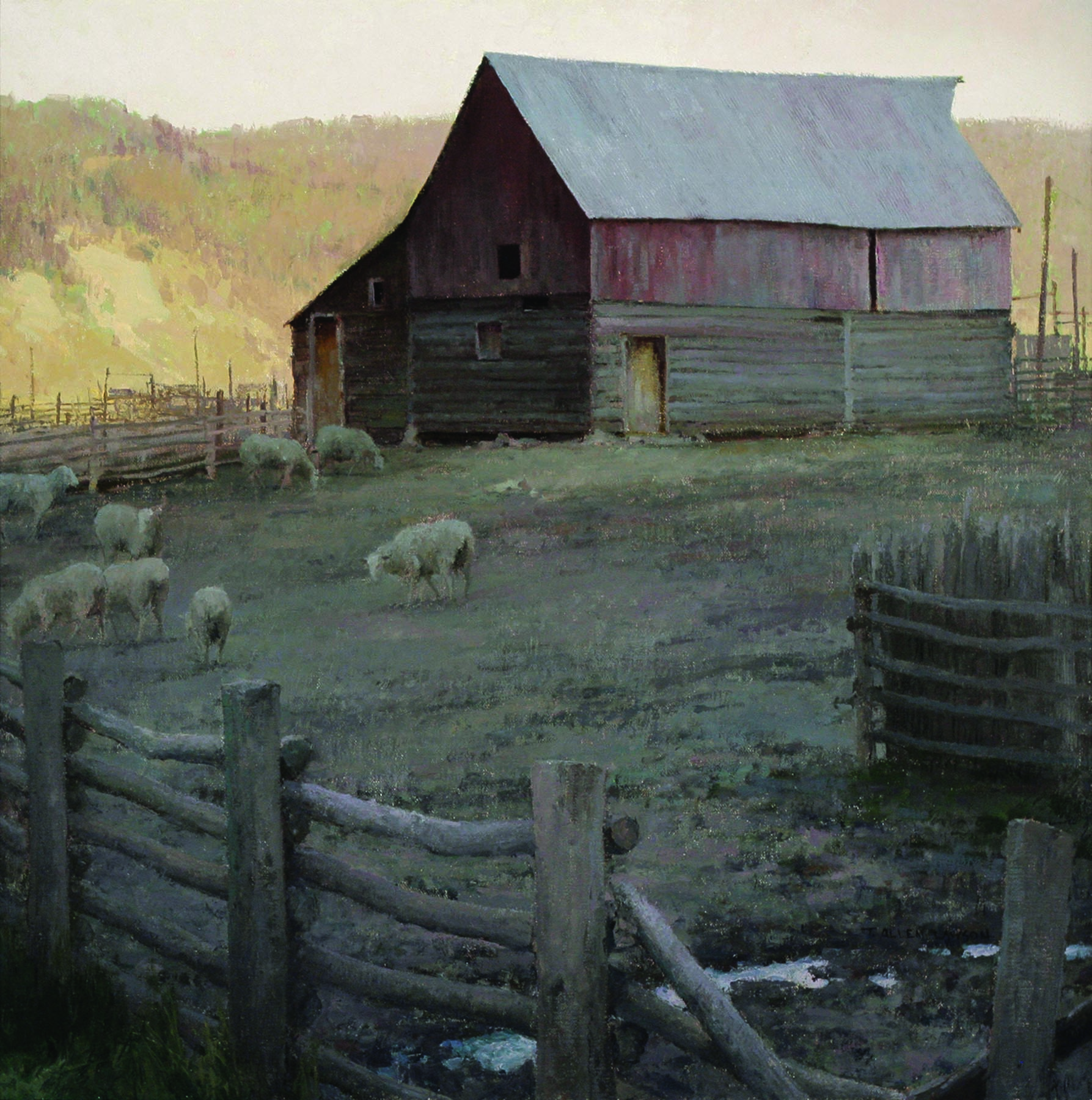 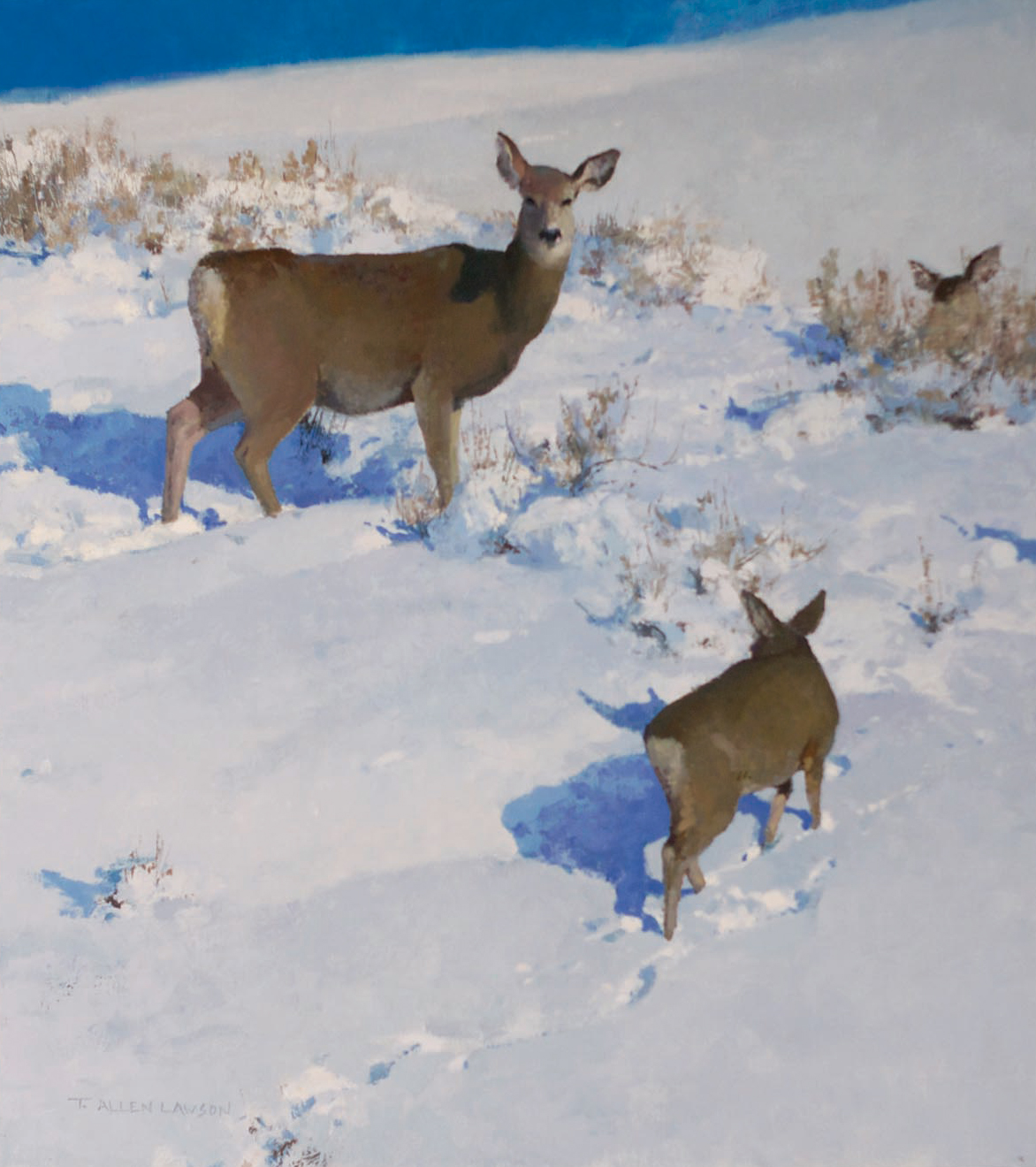 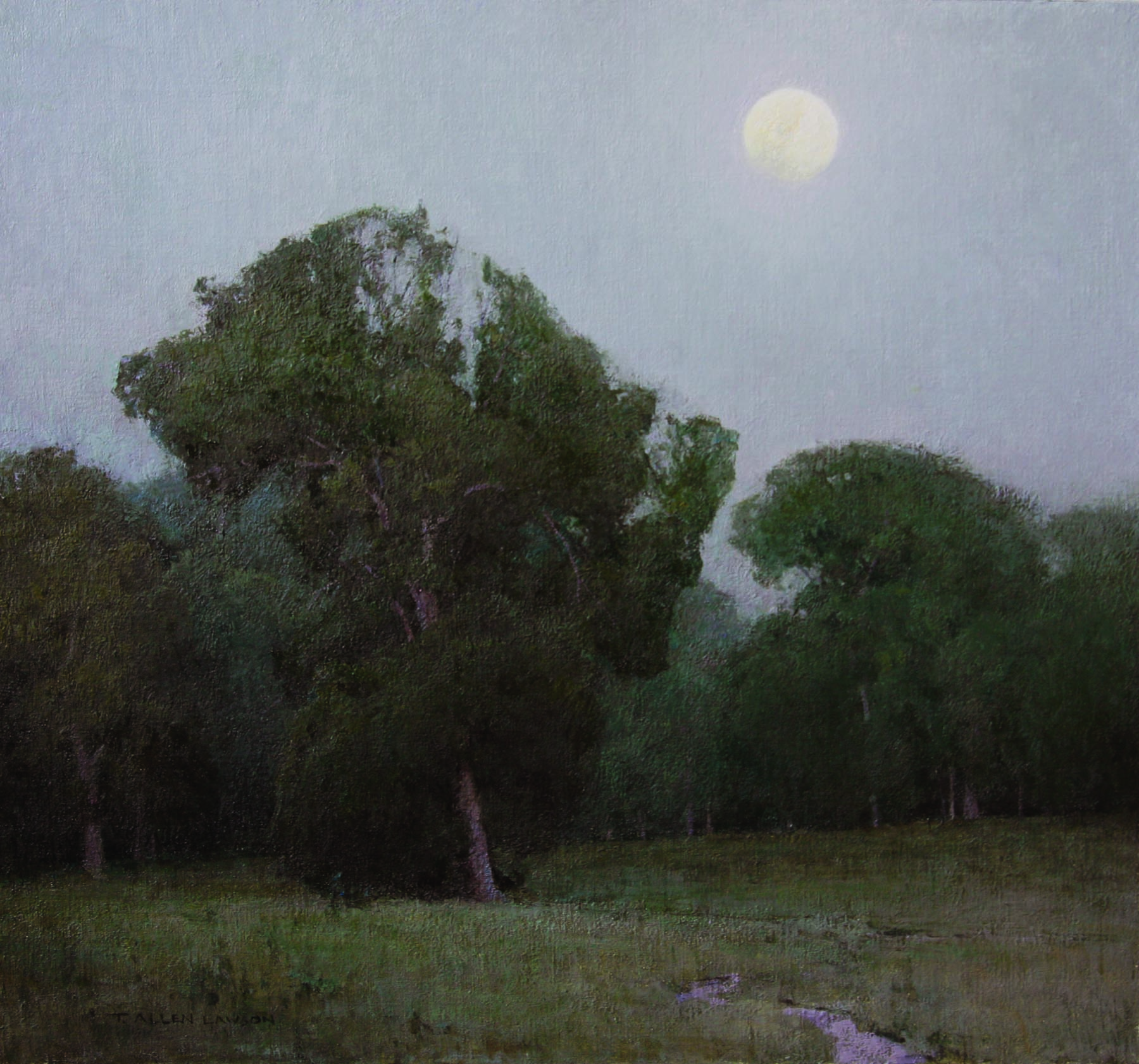 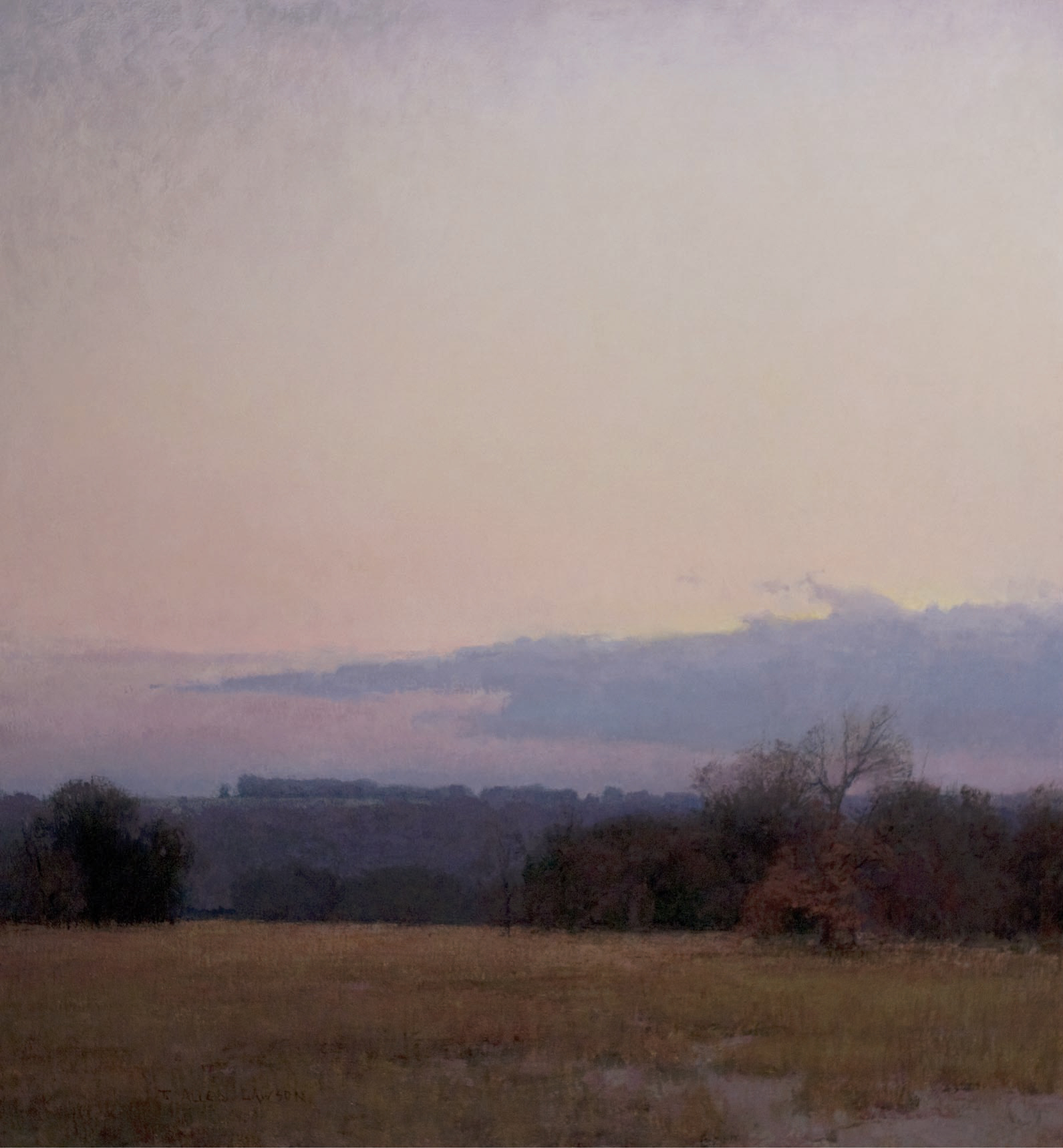