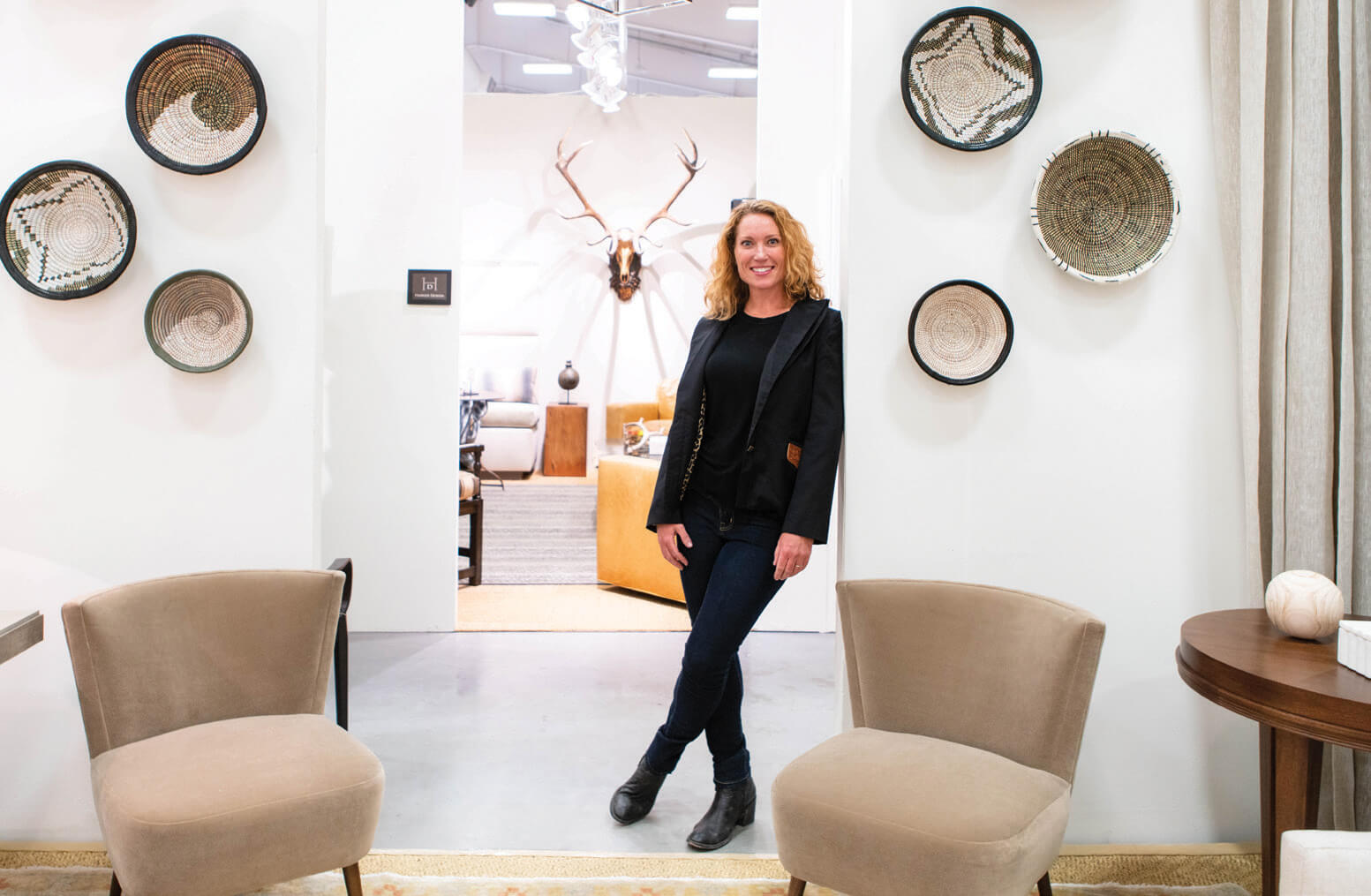 Allison Merritt managed the Western Design Conference for seven years before buying the business in 2014. Now serving as the executive director, she adds new touches each year.

09 Aug Celebrating the Art of Design

After a year off due to the COVID-19 pandemic, the Jackson Hole, Wyoming-based design event of the year is back. From September 9 to 12, the 28,000-square-foot Snow King Events Center will once again be bustling with more than 100 artisans from around the country, and thousands of art and design fans, for the Western Design Conference Exhibit + Sale (WDC), held during the 10-day Jackson Hole Fall Arts Festival. “It’s an event that is really celebratory, and it’s fun for the public and the artists alike because they get to meet the makers and also shop directly with them,” explains WDC executive director Allison Merritt.

The four-day celebration kicks off with a fashion show during the ticketed preview party, featuring local models strutting a 40-foot runway in couture designs, along with a spirited live auction, food, and drinks. The following day, the space is open to the public, featuring booths that represent artisans from around the country, with a variety of products and mediums on display, such as furniture, wood and metal art, clothing, jewelry, home accessories, cowboy boots, saddles, and more. During the event, a panel of judges selects which artisans will take home $20,000 in cash prizes that are awarded for different categories. “The show is unique in the sense that it’s all functional art, merging the utilitarianism and aesthetic of museum-quality work, and everything is one of a kind,” Merritt says, noting that all items are made in the U.S. or Canada.

The WDC’s first event was in 1992 in Cody, Wyoming. In 2007, the show moved to Jackson Hole, where Merritt managed it for seven years before purchasing the business and eventually adding “Exhibit + Sale” to the name, emphasizing that it’s an event for everyone, not just those in the design industry. And the WDC is ever-evolving: The Designer Show House, added in 2015, features spaces curated by interior designers, and, new this year, a library area will be open with a number of niche authors on hand to sign books. “I love that it’s always different every year,” Merritt says. “It’s like a reunion in a lot of ways, because there are so many artists and designers that come year after year and have this amazing following.”

And after a year off, regular visitors and artisans are excited to gather in person once again. “I think it makes it even more special for people to be able to reconnect and get out and shop,” Merritt says. “And also to see the works, actually hold them, and connect with these different artists, because each piece has a story. It’s neat to meet the maker and hear the artist’s or designer’s story.”

Merritt believes that the pandemic led many of the creatives to slow down and focus on quality, artisan-made products more than ever before. “I do think spending all this time at home has also made people clean out the clutter and just realize what’s really important to them, like having pieces that are functional and serve a purpose, but also are beautiful and really well made,” she says. “Quality work is more important [these days] than ever.”

Merritt is quick to point out the advantages of artisan, handcrafted items. “It’s a unique opportunity to buy things in a world where so much is mass-produced; things that really last and that you use every day,” she says. “A lot of these items are really meant to be used or worn, enjoyed, and passed down — or at least to really last.”

In addition to providing opportunities for people to purchase meaningful, skillfully made items, the WDC enables attendees to meet artisans from around the country, and view one-of-a-kind works that can spark creativity and inspire innovation. “The show lets your imagination run wild because it’s sort of like the sky’s the limit, the makers and artists can create almost anything,” Merritt says.

Using locally sourced walnut, Oregon maple and burls, Billings, Montana-based artisan Tyrel Johnson creates works that feature exquisite tales. “I try to tell a meaningful story with each sculpture, and that’s why I use wood the way I do,” Johnson says. “It gives me multiple mediums to tell the story in an elegant yet simple way.” 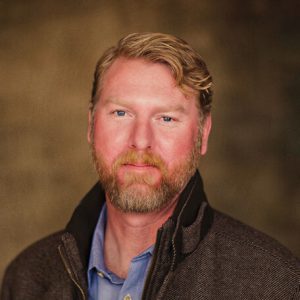 Johnson typically sits with an idea for a while before bringing it to fruition. “I usually start with a word, or even an emotion, and then give it a few months, sometimes a year, and it just turns into a great concept I have to make,” he says. At that point, he begins sourcing  the wood and sculpting. 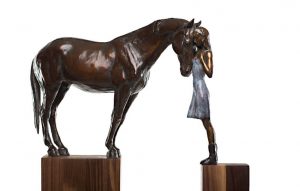 He also makes sure that everything he crafts has meaning. “I feel like every piece of work gets a piece of me, but I always strive to give my clients a piece of them in a way, something that resonates,” Johnson says. “That’s my goal: to tell a story that’s not just part of me or meaningful to me, but that might be in someone’s home and make their lives better.” 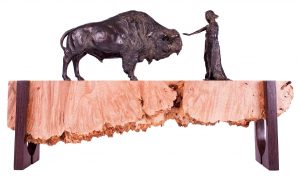 One of Johnson’s favorite pieces is “Undivided Love,” a sculpture that depicts a young girl embracing her horse from opposite sides of a chasm. “It’s a real culmination of both my skills and my imagination, so it’s one of those pivotal pieces for me,” he says.

Johnson first attended the WDC in 2018, and he looks forward to being there in person again this year. “I like to see the vast array of artisans and craftspeople,” he says. “It’s pretty amazing.”

Cheyenne, Wyoming-based artisan Spencer Young started working with wood as a cabinet maker. Not long after, finding himself drawn to larger decorative furnishings — such as credenzas, dressers, chairs, and more — he started Titan Woodworking with the goal of creating functional pieces that bring people together. “As long as I can picture it being in someone’s house, people gathering around it and enjoying it, that’s the biggest inspiration to me,” he says. 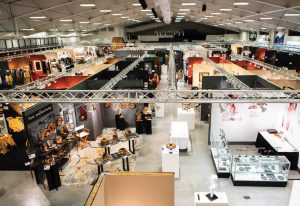 The WDC takes place in the Snow King Events Center and features 28,000 square feet of space for artists and shoppers to connect.

Young usually starts off by imagining how the item will ultimately be used, whether it’s to store favorite items or to be located in a central living area. “Most of the time, when I’m designing a piece, it starts off with how it’s going to be functional, and from there, it moves into what I can highlight within it, how I can add some texture to it, and how I can add some really cool design elements to it,” Young says. “I might sketch every once in a while, but mostly it comes from my head.” 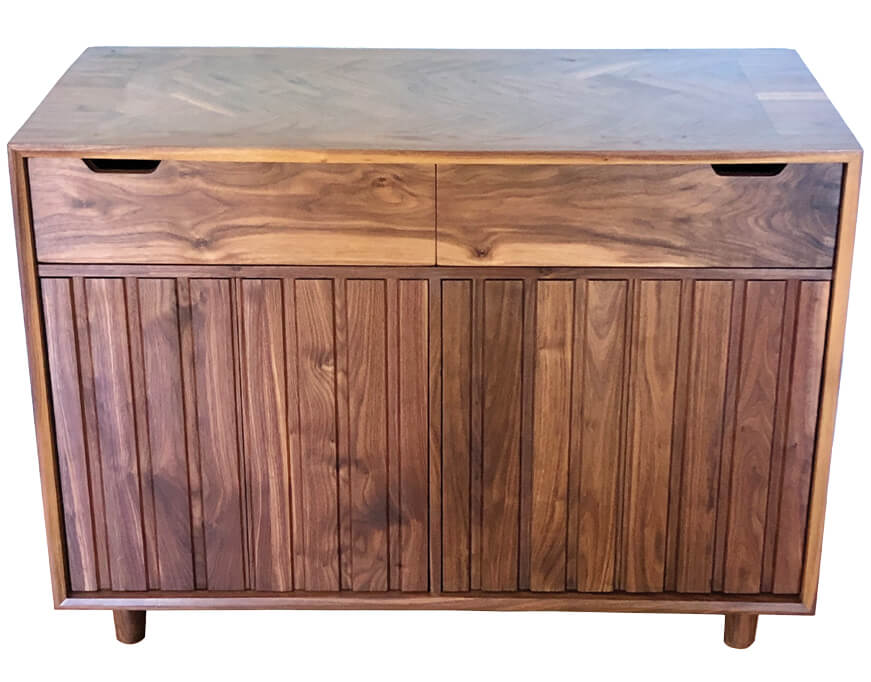 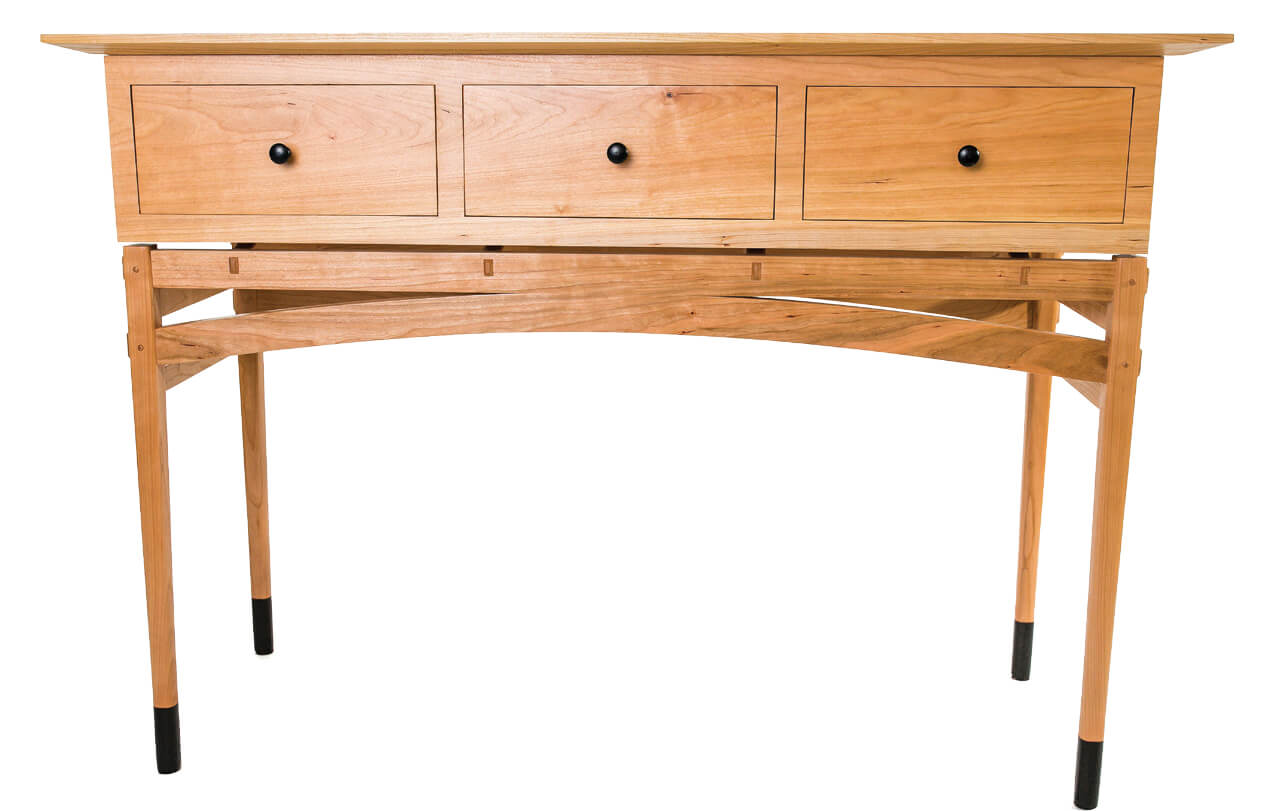 Along with displaying his own pieces, Young enjoys viewing the work of others at the WDC. “From a woodworking perspective,” he says, “there are so many amazing artists, so it’s a great place to draw inspiration.”

When Samantha Dankert lived in Billings, Montana, she often passed by a leather goods shop. On occasion, she would wander in, inhale the fragrant scents, and gently touch the pieces, admiring the artistry and craftsmanship that went into each one. Those experiences led her to become fascinated by leathercraft, inspiring her and her husband to try it out as a hobby. The couple started out by making holiday presents for friends and family, and eventually, they were hooked. So much so, that they turned their hobby into a business: Beargrass Leather. 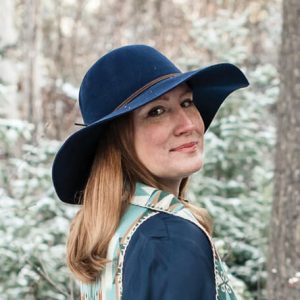 Today, located in Lakeside, Montana, about 20 minutes south of Kalispell, Beargrass Leather offers an array of products, from vests to pillows, and specializes in handbags designed for women. “We try to create covetable pieces of art that are more than just your everyday tote bag — but we make those too,” Dankert says. 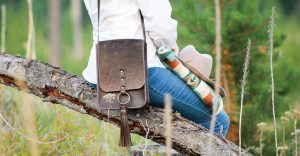 She attended her first WDC in 2017 and was inspired by her surroundings. “The reason it enticed me was that I saw such a plethora of artists … and I saw this elevated refined style that really just drew me in,” Dankert says. “It spoke to me and what I see when I create.” 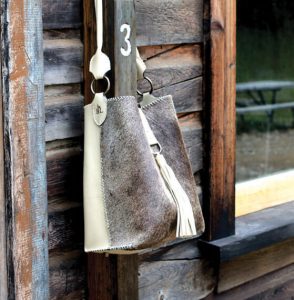 Admittedly, one of her favorite elements is the fashion show. “I love high fashion, and I love every day [wear] also,” Dankert says. “And I love leather — the look, the touch, and the smell of it. It’s just such a textile thing, and feeling it in your hand can draw you to different memories.”