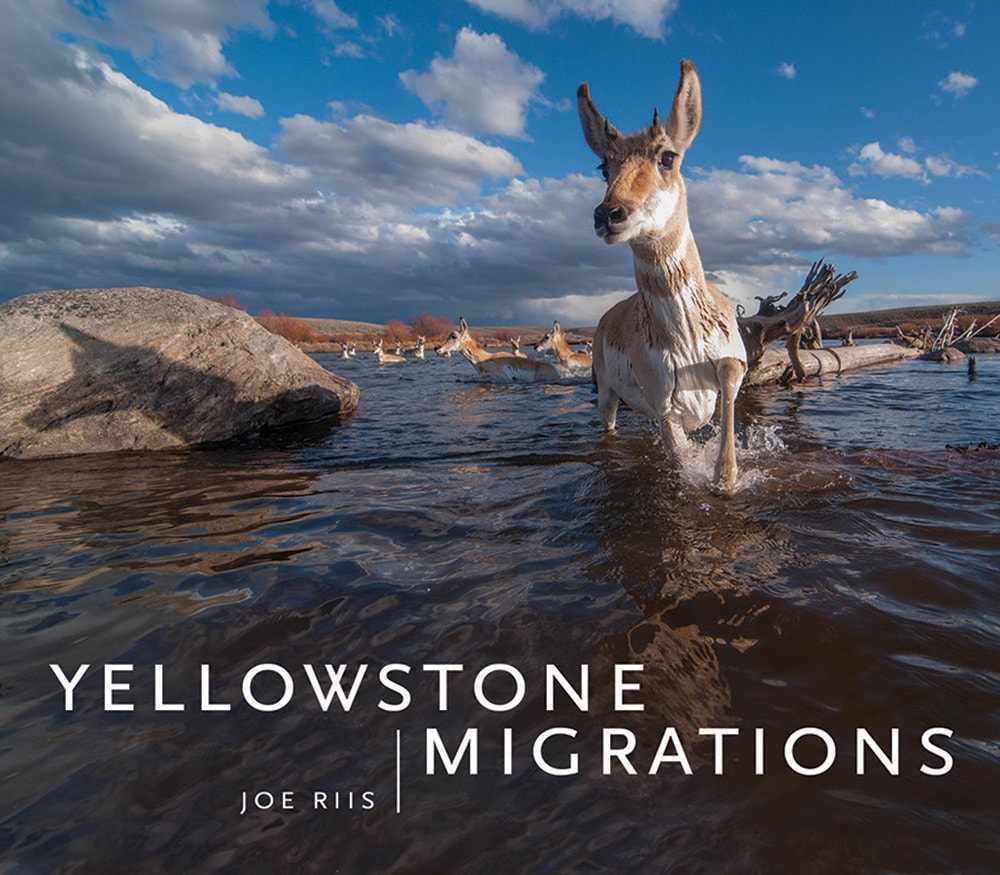 Yellowstone Migrations by Joe Riis (Braided River, $29.95) is a beautiful and ambitious illustrated study of the Greater Yellowstone Ecosystem, and more particularly of the migratory patterns of the animals that call the region home. Riis, a wildlife biologist and award-winning photojournalist and cinematographer, has brought together essays by Gretel Ehrlich, Emilene Ostlind, Arthur Middleton, and Thomas Lovejoy, in addition to his own work. He richly populated the volume with stunning color maps and photographs that capture the constant movement of nature.

While most of the major mammal species in the region are featured, along with migratory birds, pronghorn are a particular focus of Riis’ work. Through images and text, he offers a new appreciation of Antilocapra americana, a species often overshadowed by the presence of more glamorous ones, such as wolves, bear, and bison. His photographs of pronghorn capture a herd moving as one across snowy, barren landscapes, and include images of single animals leaping across streambeds, another with a foot snagged in a barbed-wire fence.

Then there are the maps: The story they tell about the region makes a case for its conservation. A beautiful topographical map of the Greater Yellowstone region features the migratory patterns of elk, mule deer, and pronghorn, and makes a visually stunning case for the incredible journeys that each species undertakes every year.

Images of semi-trucks, oil rigs, and other barriers give context to the challenges of natural migration patterns in a modern world. Riis also uses photography to acknowledge the role that guides, conservationists, recreationists, and wildlife photographers have in shaping the world inhabited by these wild animals, showing their camps and technology. Taken together, the words of the essayists, along with the photos and maps, are moving and evocative, and make a strong case for preservation. 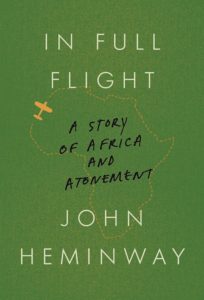 In Full Flight: A Story of Africa and Atonement by Montana-based writer John Heminway (Knopf, $27.95) is a haunting biography of the remarkable Dr. Anne Spoerry of the Flying Doctors service, a woman who used her medical training to save thousands of people during her more than 50 years in rural Kenya. Yet, not all was as it seemed.

Heminway, who first became aware of Spoerry in the 1970s, met Spoerry in Africa and tried for years to interview her. Over the years, he occasionally accompanied Spoerry on flights into the bush and assisted her in places where she was revered as “Mama Daktari.” But while she was willing to have him accompany her on harrowing flights, sometimes pressing him into service, she remained reticent with him — and with all the other journalists wanting her story — and simply did not speak about her early life in Europe, and more particularly about what happened to her during World War II.

There was good reason for her reluctance. When Spoerry eventually did talk to Heminway, he learned that the woman who was renowned for her selflessness as a doctor in Africa had been imprisoned at Ravensbrück concentration camp during the war. While in Ravensbrück, she had been forced to work as a “doctor” on fellow prisoners, which gave her special privileges. But in reality, it was discovered that she committed atrocities and murder alongside another prisoner, a woman named Carmen Mory, who would actually be convicted of her crimes after the war, while Spoerry escaped prosecution, fleeing to Africa. The contrast between the Anne Spoerry who had joined the French resistance only to be subjugated and twisted by the Nazis, and the woman who at 45 years of age taught herself to fly and traveled to the most remote and primitive areas to help the people of Kenya was extreme.

Heminway’s research encompasses Spoerry’s journals and interviews with those who knew her best in Europe and Africa. He includes reproductions of pages from the journal, complete with sketches of her life in the bush and numerous photos. He also integrated his awareness of his own blind spots as a biographer — notably his long-time admiration of Spoerry and her work, along with his association with her most ardent admirers — to make this book not just a fascinating story about an unusual and controversial woman, but also a thought-provoking contemplation of the nature of good and evil. Heminway states clearly that he doesn’t know “whether Anne’s evil can ever be undone, forgotten or forgiven. … Let’s not forget I only knew Anne in Africa. And there, it will become clear, I fell headlong under her spell. What I discovered after her death still leaves me speechless. Can I reconcile the two Annes? I am still working on it.”

Readers will also find themselves working on it. Contained between the covers of this book, the story of her contradictory life considers the light and dark within people, as well as the nature of evil and possibilities for redemption. 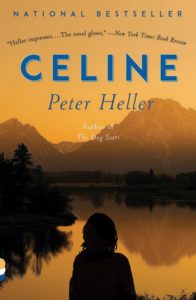 Celine Watkins, heroine and protagonist of Peter Heller’s eponymous novel Celine (Knopf, $16) is an elegant, gray-haired artist who lives with her husband, Pete, in the shadow of the Brooklyn Bridge. She is a gun-toting, licensed private investigator who is showing signs of her age, and suffering from emphysema. Nothing about her upbringing, from a prewar childhood in France, to prep school in New York, to college at Sarah Lawrence seems logically to lead her to a vocation as a seeker of missing persons, but her unconventional methods have given her a reputation for success. And clearly there are mysteries in Celine’s past that both Pete and her 40-something son, Hank, would like to solve, and which become intertwined with the long-cold case that Celine heads West to investigate.

Heller’s mystery-thriller begins in New York, where the lovely Gabriela Lamont has come to Celine for help locating her father — presumably mauled and killed by a grizzly in Yellowstone 20 years earlier. A National Geographic photographer, Paul Lamont was known for his recklessness and descent into drink after his wife’s death, when Gabriela was 8 years old. He had been shooting photos of bears in the park, and the conclusions of local law enforcement had been swift. Even though there was no body, he had clearly encountered a large grizzly at close quarters and his body dragged from the scene.

Gabriela, however, was never convinced that the conclusions of the local sheriff and park law enforcement were well founded. She approaches Celine with a plea to take on the long-cold case of his disappearance. Celine and Pete head west to Denver, travel across Wyoming to Jackson, and then north into Yellowstone, following the trail of clues left in the personal history of the Lamonts — clues that seem to point to a cover-up of what really happened to Gabriela’s father. It is soon apparent to Celine and Pete that they are being followed and subtly intimidated by someone who doesn’t want the case reopened.

Celine’s history is woven throughout the narrative that Heller deftly created across the stark and spectacular landscapes of his setting, providing a backstory for the unlikely combination of skills that she brings to her work. The places that Heller describes, and the people who inhabit them and cross paths with Celine and Pete, are authentic. The intertwining of childhood recollections with modern-day menace contributes to the novel’s suspense. Celine is a remarkable character and she stands in vivid outline against the crisp and lovely background of the book’s settings, propelling a page-turning narrative. 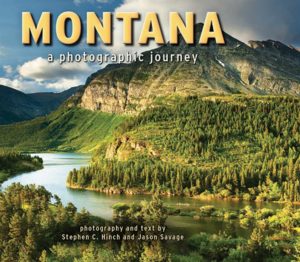 Photographers Stephen C. Hinch and Jason Savage take readers on an insider’s tour of the stunning, interesting, and curious in their collection, Montana: A Photographic Journey (Farcountry Press, $12.95). This view of Big Sky Country features all of the well-known and quintessential views of the state in full, saturated color, from Glacier National Park and the world-famous Going-to-the-Sun Road, to Bozeman’s Museum of the Rockies. But the book achieves intimacy through photos of abandoned homesteads and quiet wildlife encounters.

One hundred and eighty new sonnets by Greg Keeler, a Bozeman, Montana-based poet, 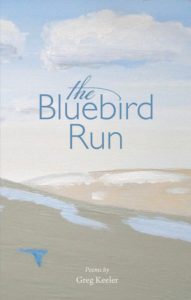 musician, artist, and writer, comprise The Bluebird Run (Elk River Books, $15). Contained within the traditional form, his musings on aging, the environment, societal angst, loss, and love display his facility with language and imagery. The poems offer glimpses into Keeler’s life and flashes of his humor — readily evident in his songwriting — as well as moments of anger transformed in verse. The arrangement of the book displays his versatility: pastoral musings on grasshoppers and local wildlife share facing pages with pointed criticism and playful pieces like “After Reading Too Much Whitman.” A new subject and story unfolds at the turn of each page. 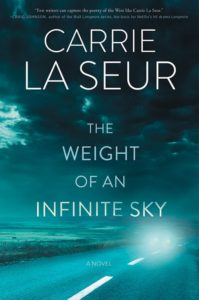 In The Weight of an Infinite Sky, (William Morrow, $26.99) author Carrie La Seur takes her cue from Hamlet and explores the history of a ranch family set against the backdrop of a rural Montana community that is faced with overtures by a predatory oil company. La Seur is a Billings, Montana-based attorney, and her familiarity with both the law and the landscape infuses her tale of Anthony Fry’s return to his family home under the weight of his late father’s expectations. The mystery at the heart of the novel is whether Uncle Neal had anything to do with the death of Anthony’s father, a plot drawn directly from Shakespeare. And the suspense has as much to do with whether Anthony will find peace with the decision he’s made to return home as it does with the question of who will sell out to the oil company. His angst, and his questions about whether his “sacrifice” of an authentic life is worth it, propel the story. Full of intriguing characters who are relatable and not caricatures, this is a novel that captures the West within the form of an ancient story.

Wild Montana by Donald M. Jones (Farcountry Press, $26.95) is a beautiful compilation of the renowned 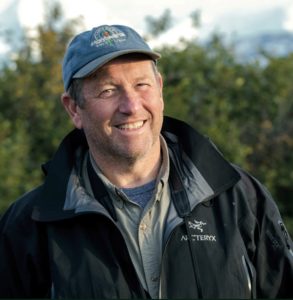 and prolific Montana photographer’s best images from his 30-year career among the wild animals of the Treasure State. Jones’ storied career has taken him all over the world to photograph wildlife, and his images have been featured on more than 800 magazine covers. This volume brings together the best of his home state.

Blue skies, golden leaves, and soft autumn light fill the pages of Andrew Weiner’s first book for children, Down by the River, illustrated by April Chu (Abrams Books for Young Readers, $17.99). In this charmingly simple and old-fashioned picture book, Weiner — an avid fisherman — shares his love for time spent “down by the river” with his family and faithful dog, casting dry flies, catching and releasing fish, and sharing the experience across generations. The best picture books are like poetry, a few simple lines of text conjure vivid images. In this case, the magic is made complete through lovely illustrations that capture the joy and uncertainty of a day spent fishing.