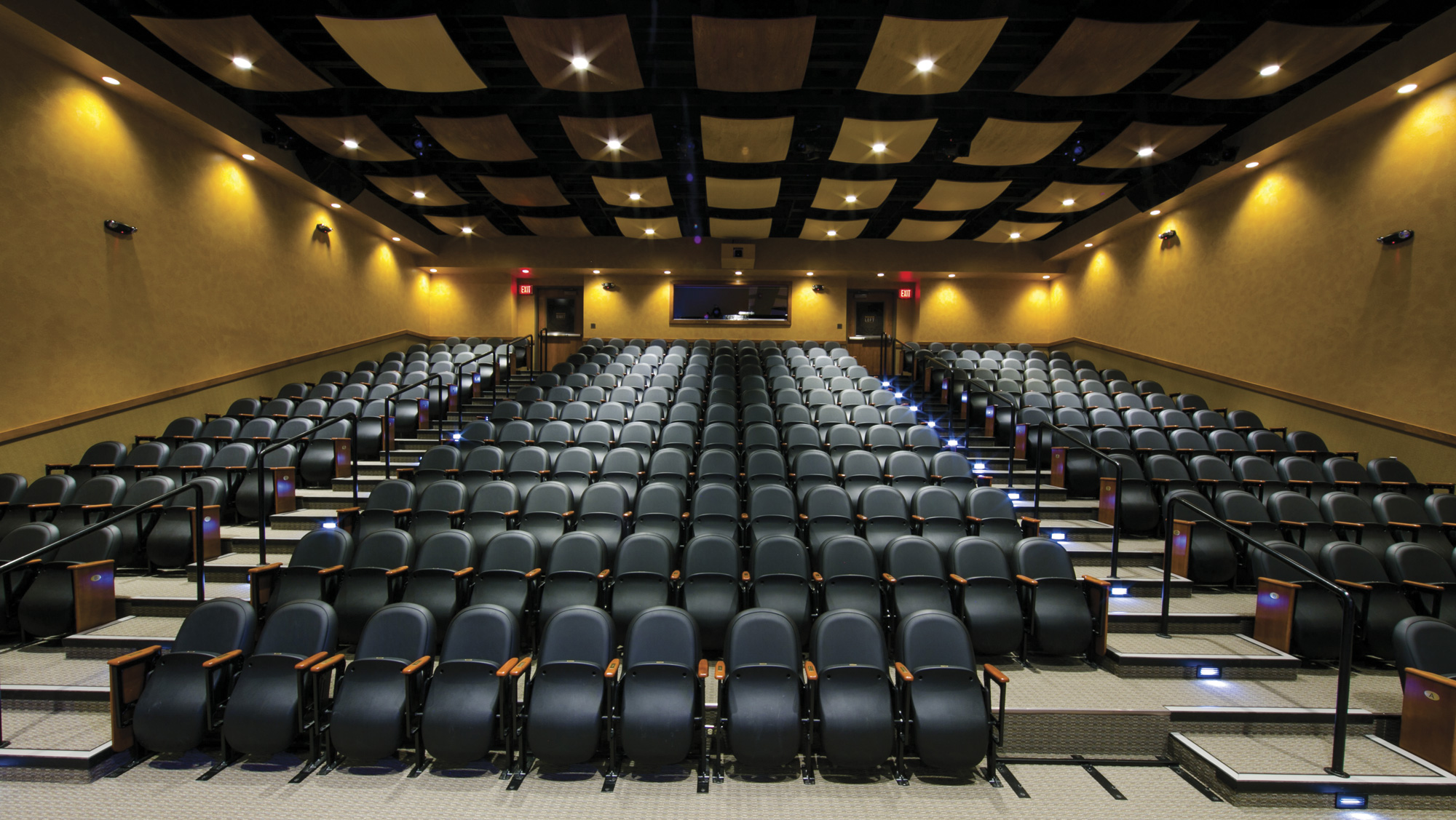 Andrew Jensen, Logan Smoot and Ron Richeson work to gather honey on a hillside overlooking Freezeout Lake. Their protective suits are duct taped at the wrists and ankles, assuring no exploratory bees venture too far.On a cloudless Sunday night last March, nearly 300 people packed into the newest venue in Big Sky, eager to watch the first public performance on a stage that had been talked about for several years. The Warren Miller Performing Arts Center was

The event was Big Sky’s Got Talent, a showcase for local youth performers and a fundraiser for Big Sky Broadway — a passionate group dedicated to giving kids real theater experience on par with opportunities that exist only in bigger cities. The night was a rousing success, with kids from ages 6 to 16 showing off their skills under the bright lights, the audience relishing its new performance space and the amazing amount of talent present in this growing, Southwest Montana town.

“With the completion of the center, we can now give life to the performer in all of us in the community,” said John Zirkle, the center’s artistic director. “People can sense that performance art is something real, something tangible, and something that’s fun to do.”

The idea for an indoor theater space in Big Sky came about in 2009 when the local school underwent an expansion that added a secondary wing that would house a high school — Lone Peak High — and a new, larger gymnasium. This freed up the old gym space, which was the perfect size for a theater. Construction stalled when a wealthy donor backed out, leading to a few frustrating years of fundraising. Finally, through a combination of funding from private donors and the local resort tax — a 3 percent tax collected and then redistributed to area non-profits each year — nearly $2 million was raised to finish the theater in the spring of 2013.

Although technically operated as a school facility, no funding actually came directly from the district for the completion of the project. The theater is managed by the non-profit Friends of Big Sky Education, and features a combination of school and locally grown events. It’s a partnership that works well for both parties, allowing both students and community members to be part of something unique.

“Very few schools have this opportunity,” noted Jerry House, superintendent of the Big Sky School District. “It’s really neat for students, from kindergartners to seniors, and every time we go in the theater a little bit of magic takes place.”

Indeed, the theater has a magical feel, and seems almost out of place and too nice for a school, which is the point: Give students and the audience a professional space that transports you away from Big Sky. This cosmopolitan atmosphere gives those that perform on its stage a feeling that is larger than life.

“Performing at the theater was exhilarating,” said Missoula jazz singer Eden Atwood, who performed with a 15-piece big band last spring at an event hosted by the Arts Council of Big Sky. “I think this incredible theater will create space for the arts to do what they do best — entertain, educate and heal.”

The 280-seat theater itself is one of the most sophisticated in the state. The large stage can accommodate a full orchestra or full-scale theater production. An orchestra pit can be created with the removal of some of the seating, and there is a built-in sound and lighting system with a control booth. A 1,600 square-foot area adjacent to the theater serves as a student cafeteria during the day and a reception space during events, while a nice green room provides a welcoming environment for artists and direct access to the stage. The open ceiling permits flexible installation of additional lighting and sound equipment, while acoustical pillow clouds dampen sound among the roof girders. Perhaps most impressive is the front-of-house area — a two-story lobby with galleries for visual art exhibitions and an elevator that ensures easy access to seats in the upper rows.

“A state-of-the-art facility inspires us to go state-of-the-art in everything we do,” said Zirkle. “This is really a game changer for Big Sky.”When it came time to name the theater, the board of directors looked to one of Big Sky’s most famous part-time residents — legendary ski filmmaker Warren Miller. Miller first came to Big Sky in 1998 and now spends the winters here with his wife, Laurie, where they enjoy the peace and quiet of the area’s stunning winter landscape. Now 88, Miller doesn’t get on the slopes too much anymore, instead focusing on the Warren Miller Freedom Foundation he manages with Laurie. The non-profit organization aims to educate aspiring youth and adults in the fundamental principles of entrepreneurship by sharing the skills necessary to become successful, ethical members of the business community. Lone Peak High School students are offered a chance to participate in the 10-week Young Entrepreneurs Program sponsored by the foundation.

At a packed grand opening celebration a week before the first public performance, Miller was there to cut the ribbon and dedicate the facility to the Big Sky community. He also donated his first movie camera — a Bell and Howell from 1949 — to the theater, which now hangs in the lobby.

“For me, this is a distinct honor,” said Miller, choking back tears as he stood on the stage. “I can’t express enough how I feel about the honor of having my name on this theater, in this town.”

Brian Hurlbut is the author of the Insider’s Guide to Yellowstone and Grand Teton (Globe Pequot) and Montana: Skiing the Last Best Place (Great Wide Open), and his writing appears regularly in publications around the region. He lives in Big Sky with his wife and two children. 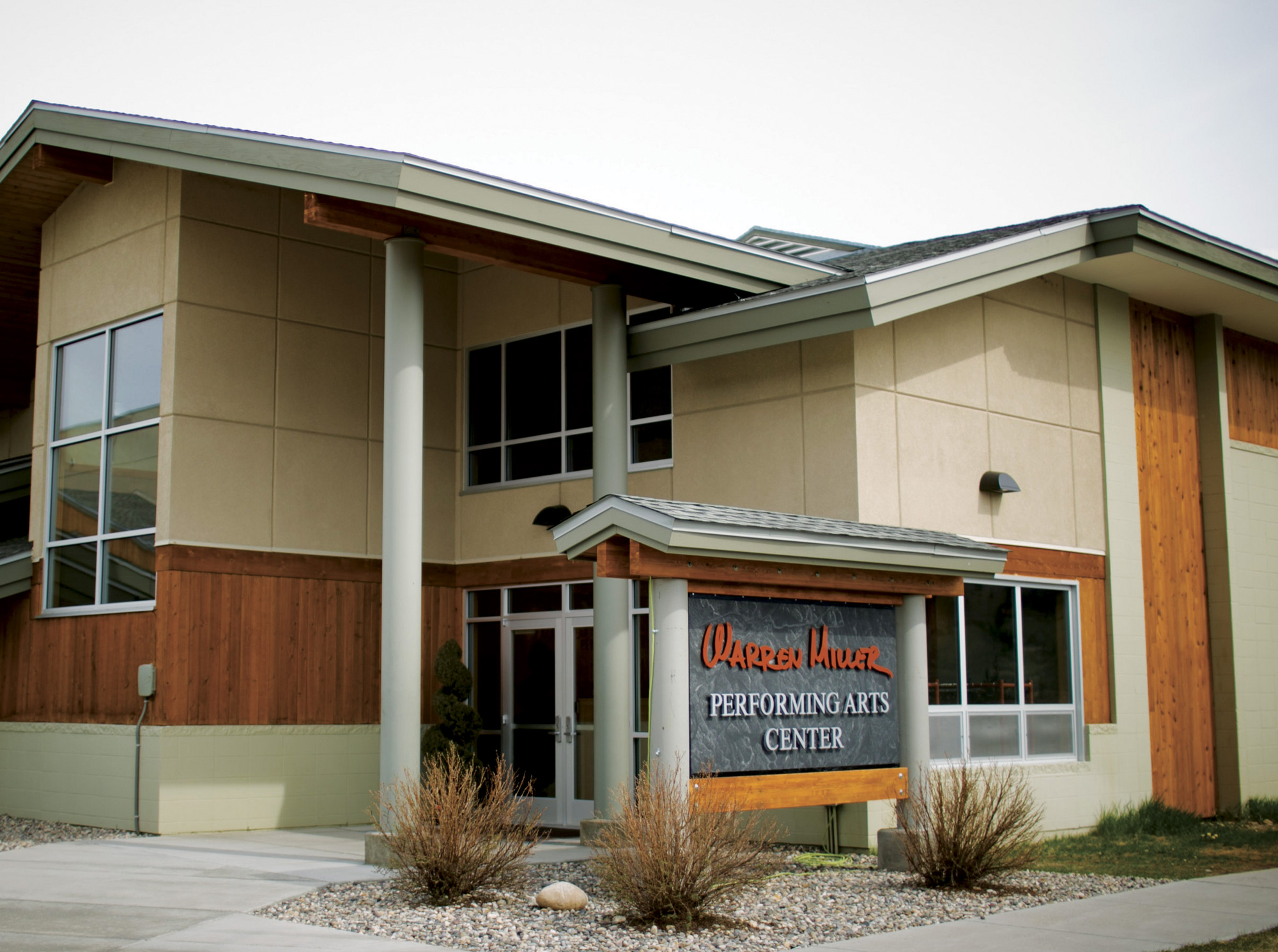 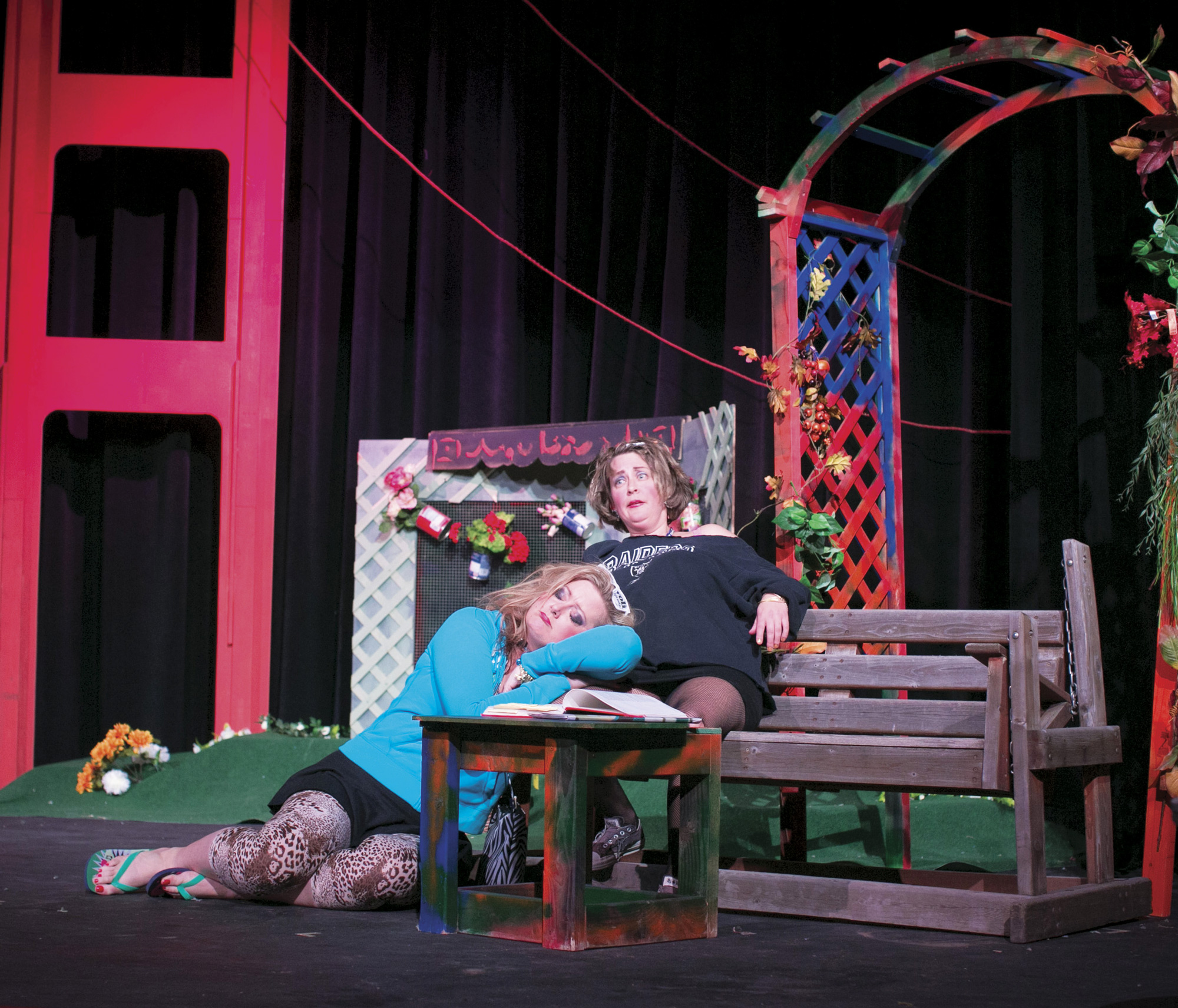 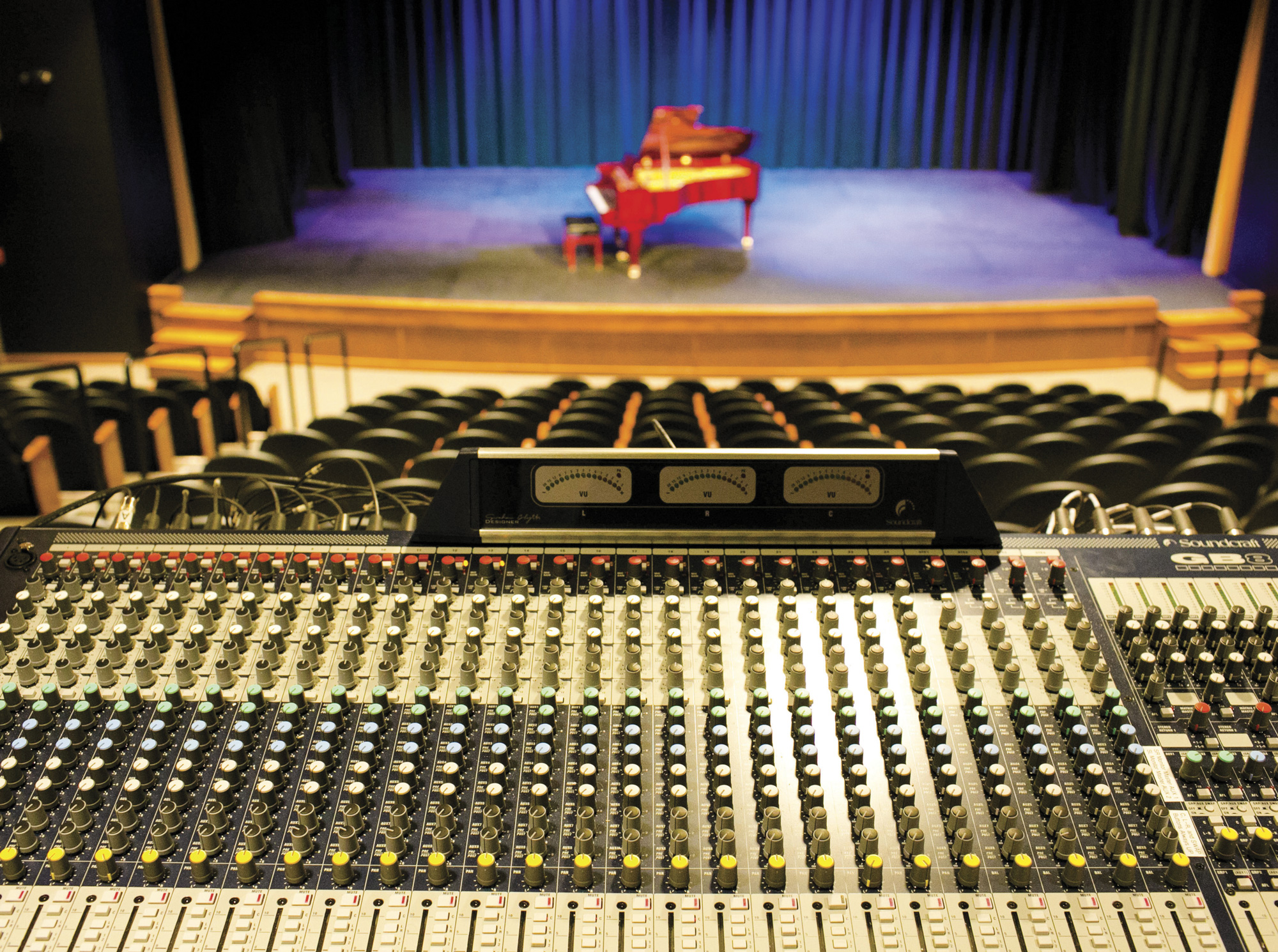 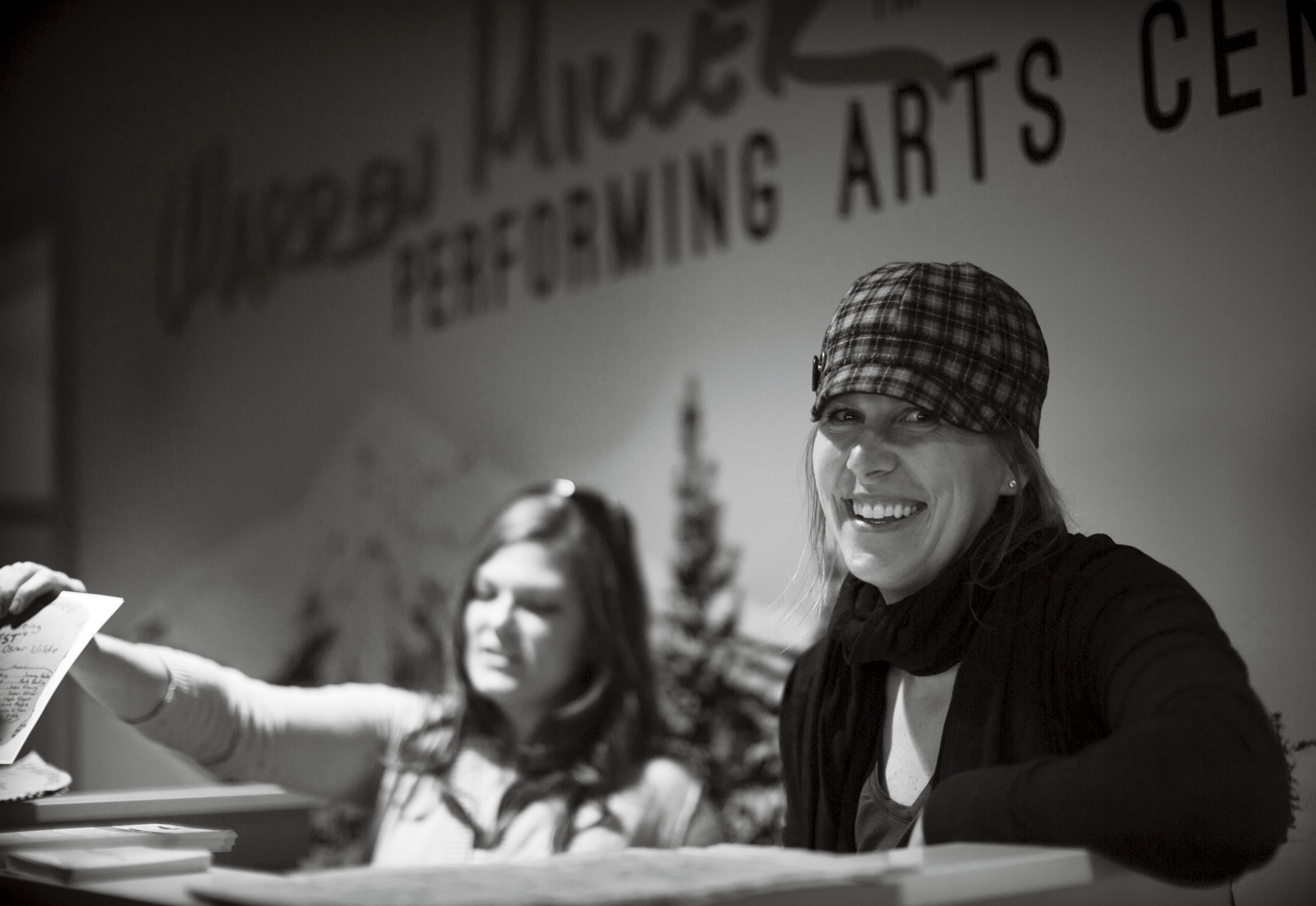 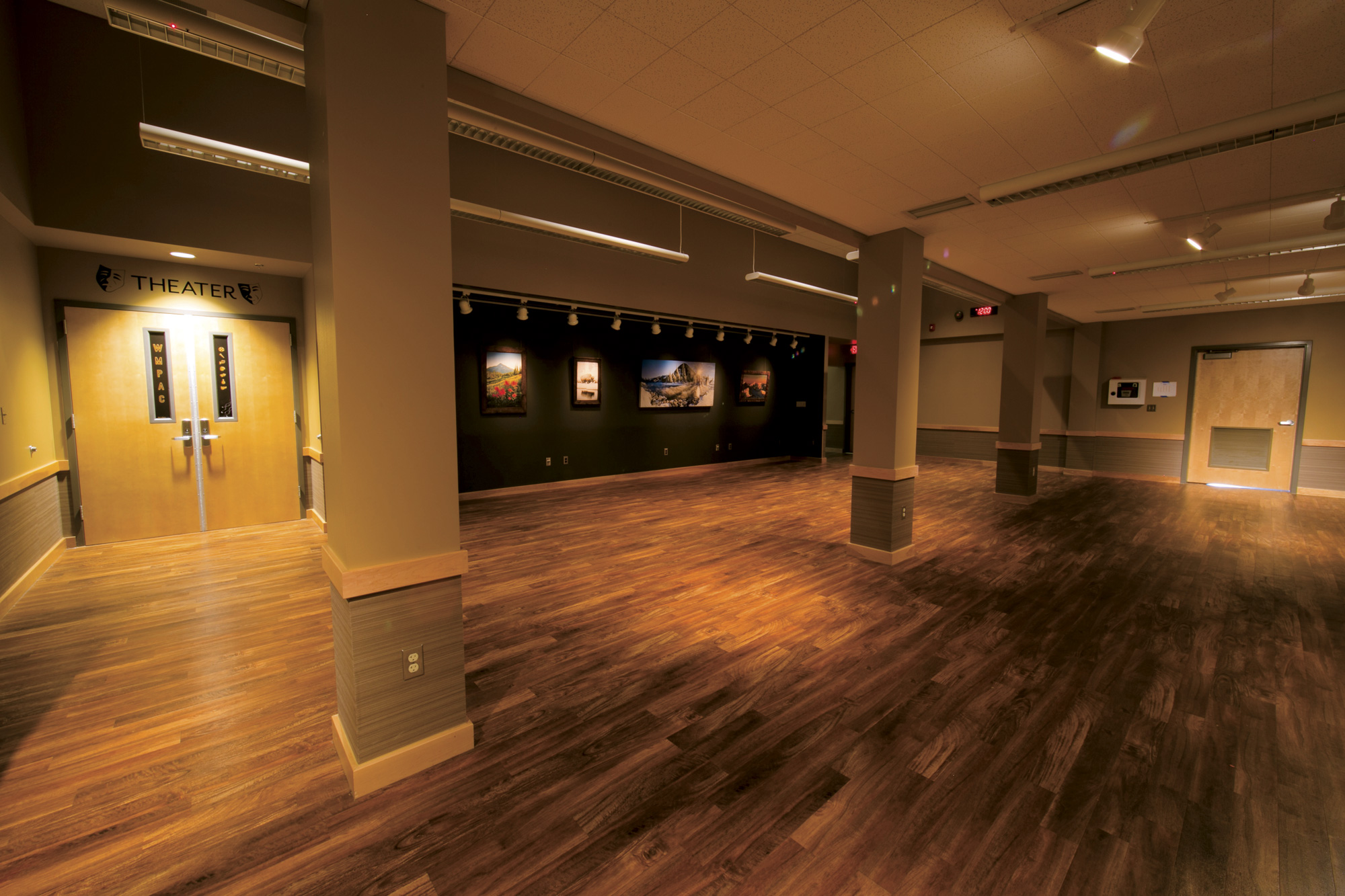 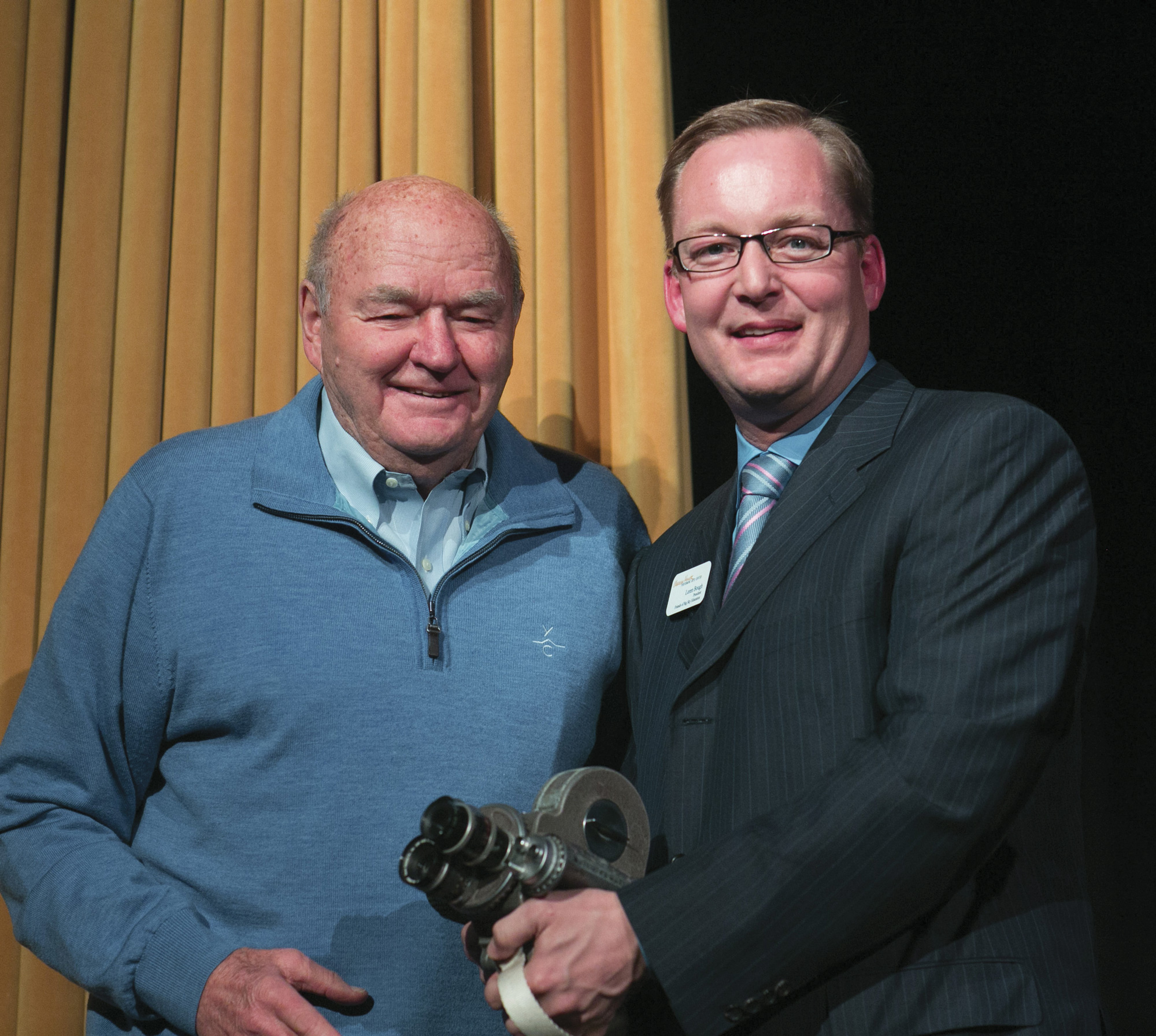 The theater of the Warren Miller Performing Arts Center features 280 seats and acoustic pillow clouds on the ceiling that dampen sound.