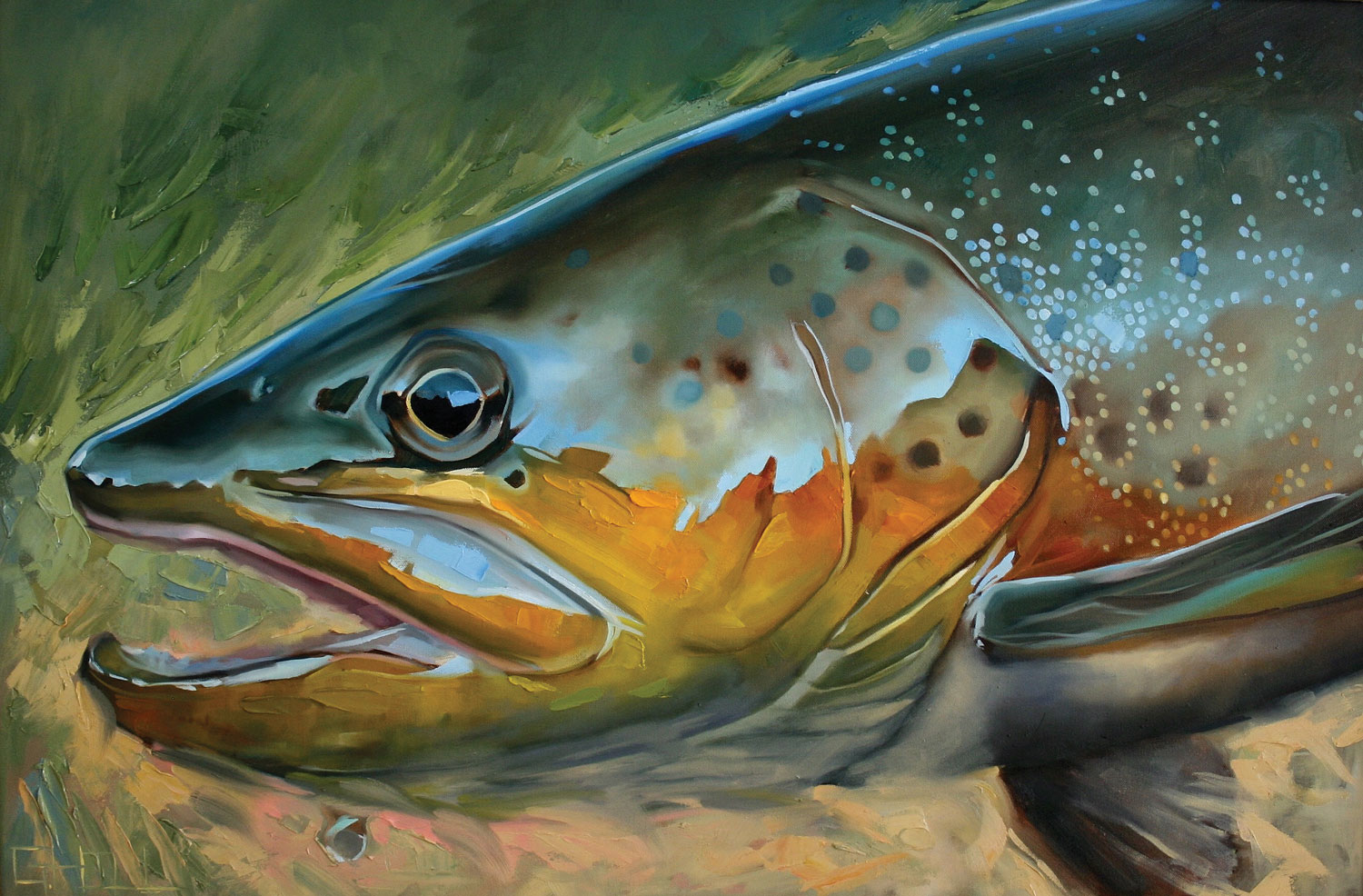 12 Feb Artist of the West: Rod, Reel, and Paintbrush

in Artist of the West | Fly Fishing 2019 | Written and Photographed by: Jodi Hausen Posted at 22:38h 0 Comments
Share

Artist George Hill pursues his fascination with an underwater ecosystem

Shortly after graduating from the University of Michigan in Ann Arbor, where he studied art and art history, George Hill sold all of his possessions and moved to Patagonia. “I wanted to travel the world, and I was obsessed with catching big trout,” he says. 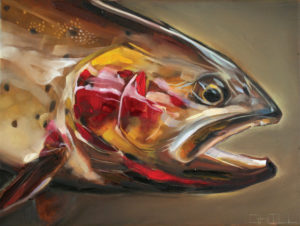 For a while, he lived on a remote cattle ranch in Argentina. “Really remote,” Hill says. “There were no roads to it. I had to hike or arrive on a horse.” But the river that ran through the ranch was full of rainbow trout, and hardly anyone else fished it.

Hill planned to be in Argentina for three months, but he ended up staying for more than two years. He spent the summers living out of a backpack and tent, hitchhiking and taking buses to chase after the streams and rivers that he’d heard about, places where he was told large trout waited in pockets and riffles. When it grew cold, he moved north, rented an apartment, and took a job teaching English. Throughout all of this, Hill carried a sketchbook and drew the people, buildings, and natural world that he discovered. 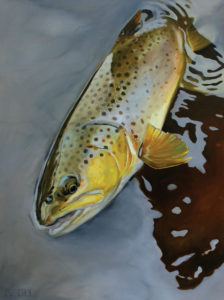 “The art I make today was very much influenced by those years,” Hill says. “I was always haunted by these large trout. … Basically throughout my 20s, I was trying to tailor everything in my life to be fishing for big fish.”

After seeking trout in Patagonia, Hill went on to work in Alaska as a commercial fisherman on a gillnetter for sockeye salmon, and as a fly-fishing guide on a remote river in Bristol Bay. After these adventures and a few others — including a short stint in Washington, D.C., studying Latin American studies at George Washington University — he transferred to a graduate program in sustainable development at  SIT Graduate Institute in Southern Vermont. In 2012, as part of a four-month practicum, he arrived in Missoula, Montana, to survey stream habitat with the U.S. Forest Service.

“I was in love right away. It was the place I was supposed to live, and it took me 30 years to get here,” Hill says. “Montana is one of the last vestiges of wilderness and wild space in the Lower 48. I almost expatriated to Patagonia, but then I decided that it was too far from my family and home. And I feel like Montana is like Patagonia.” 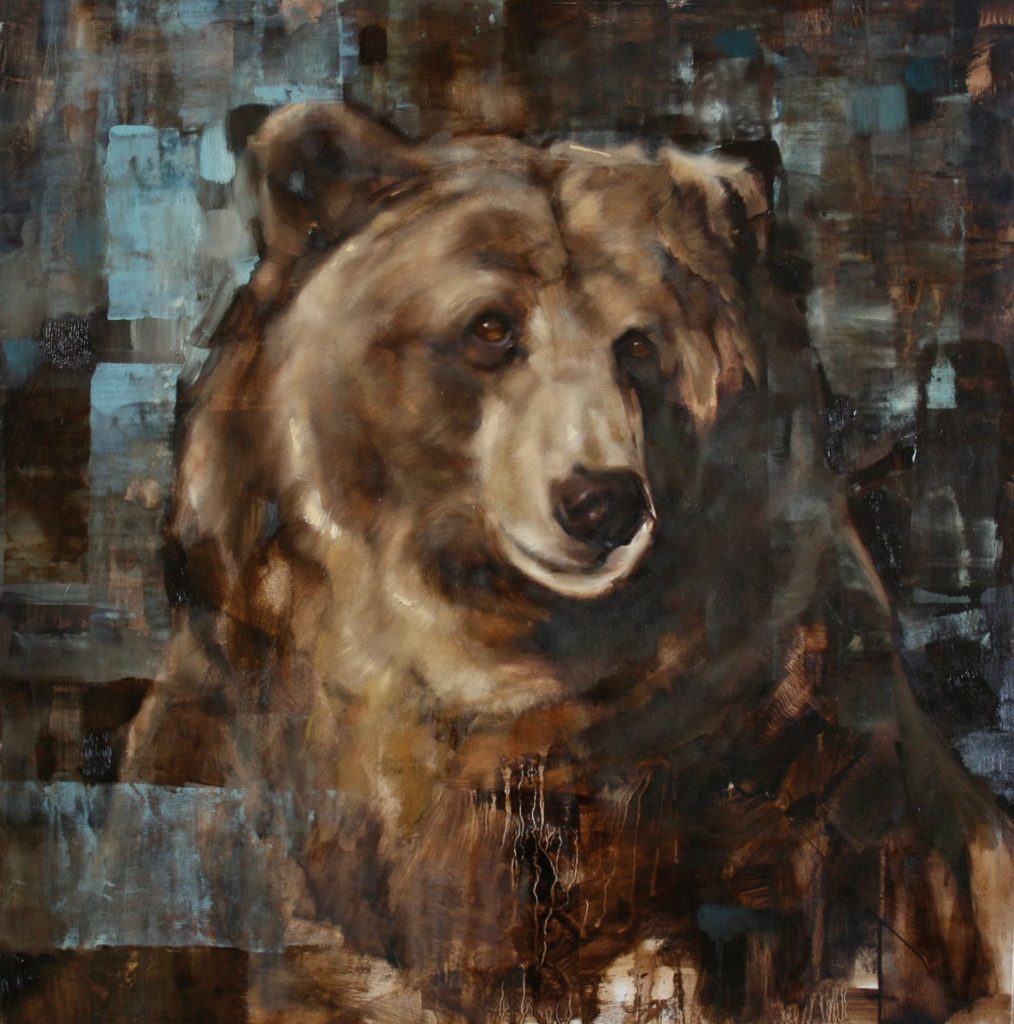 During this circuitous route of exploring life and his destiny, one passion remained as constant as his pursuit of elusive fish: his artwork. “I did lots of different things, and after graduate school, I worked for the U.S. Geological Survey and the Forest Service, doing watershed management and surveying streams. This certainly ties in with my love of water, fish, and natural ecosystems, and the preservation and management of those resources. But I disliked working for the government, because I’m an artist,” Hill says. “Through this all, what was always calling me was my art. Now, in my mid-30s, I know that this is what I was born to do. And there’s no limit to how hard I will work at it. Nothing brings me as much fulfillment or sense of purpose.”

Hill seeks to blend realism with a style that is loose and expressive to create his slippery-looking fish paintings. He takes photos of the fish he catches and paints from reference, noting that a “dead fish isn’t very pretty,” because they lose color when they are removed from the water. He strives to avoid photorealism and a belabored feeling where the “joy and expression and emotion are worked out, and [the painting] becomes something mathematical or engineered.” 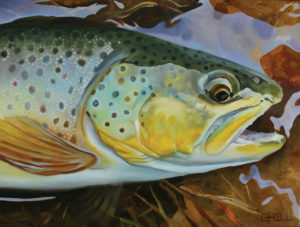 Hill estimates that he may walk several miles while creating each work, examining the subtleties of brushstrokes near and far. “I’m constantly trying for this abstract-expressionist approach, but for something that looks and feels alive,” he says. “I love to paint fish because they are these incredible, vibrantly pigmented creatures, enveloped in a thin veil of water. They are a hard thing to paint.”

From a young age, Hill had an interest in the natural world, especially growing up in Michigan, where he traveled to the Great Lakes often and went boating with his family. “My father was obsessed with being around and on the water as much as he could,” Hill says. “He wasn’t a fisherman, but he brought me to those areas, and I was able to develop that curiosity for the ecology and fish, what lives in those waters — that’s a big part of why I do what I do with my art.”

Growing up, he always had a sketchbook and plenty of art supplies, explaining that both his older sister and mother are artists. His mom would copy Paul Gauguin’s French Polynesian women and give him drawing exercises. “I think I was born with a knack for it, but then I also had those resources and encouragement,” Hill says. 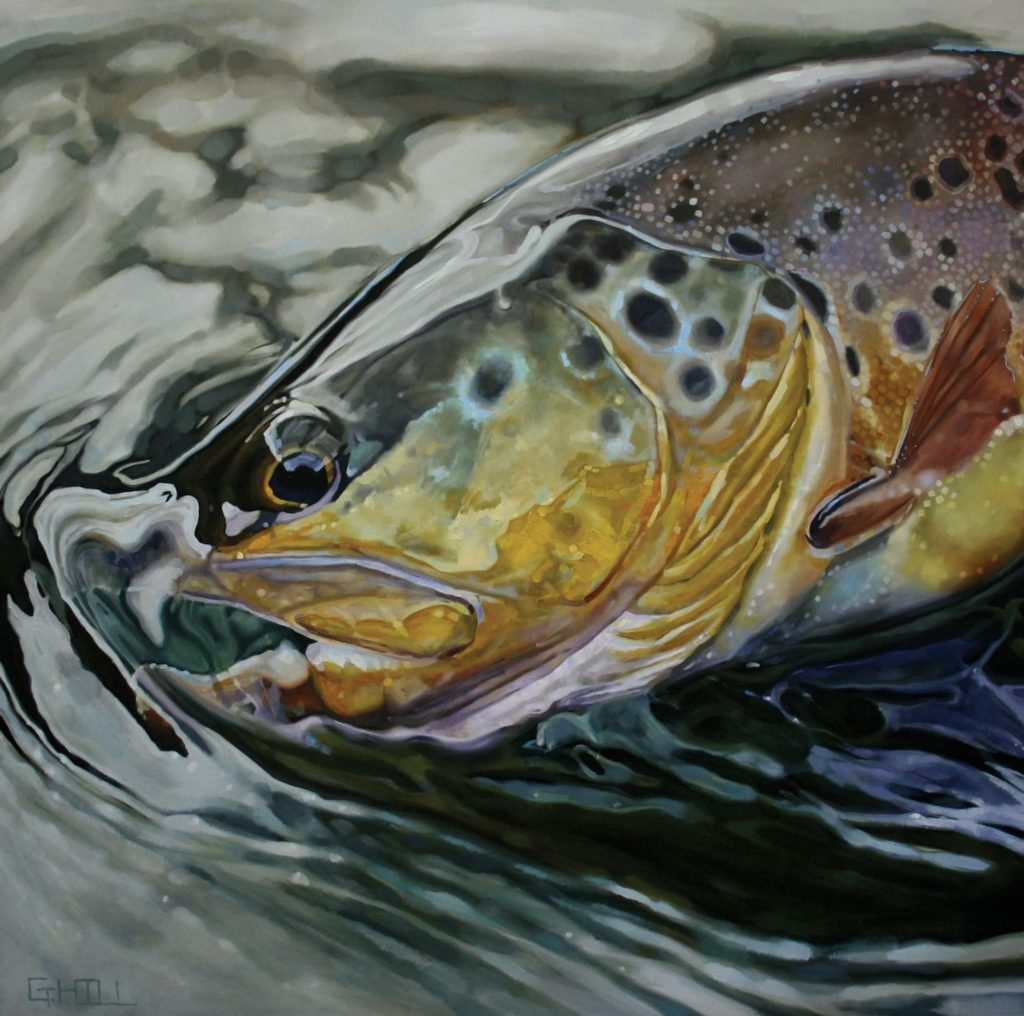 Despite deciding that art is the direction he’s meant to take in life, Hill still feels pulled toward conservation, and he hopes that his art will one day help spread the message about the importance of protecting and preserving our natural resources. “Right now, I am just trying to be the best artist I can, but eventually I want my art to be more than just a pretty picture. I want it to be humanitarian, and what I mean by that is I want it to help humans understand our natural cohabitation of this planet,” he says. “I hope that we feel we need to manage and preserve these creatures and environments. And to take action.”

In terms of the future, Hill hopes to continue creating paintings that convey life and movement, and he wants to continue working on a large scale. He will participate in Western Art Week in Great Falls, Montana, this March, and his work is represented by Horizon Fine Art Gallery in Jackson Hole, Wyoming, and The Dana Gallery in Missoula, Montana.

“There’s a purity and simplicity to [fishing]. There’s a level of privilege to be able to partake in the sport, but there’s also still this primitive simplicity to it that’s very beautiful,” Hill says. “When I am out there on the river, and I am present, it’s the best space to be in because you are experiencing life as you live it in the moment. The same thing happens when I’m painting. I am there.”