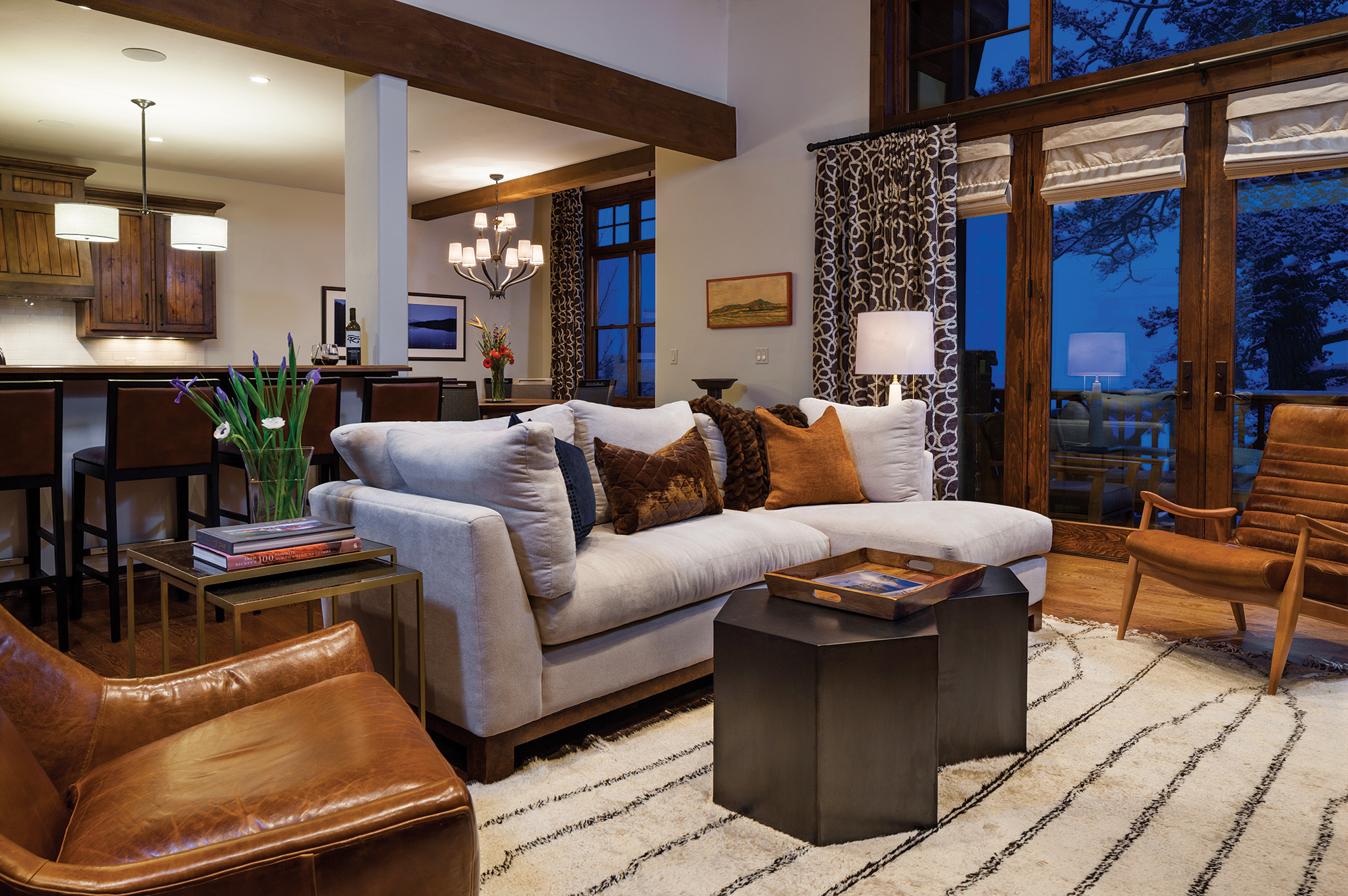 By combining contemporary pieces with a modern twist Sharon Lohss of Shelter Interiors creates livable spaces with a sophisticated feel.

“I love to blend elements,” Lohss says. “I like rustic exteriors with a more refined interior. I think that’s really been our niche.”

Inspired by nature, she depicts the elements of the outdoors with small nods to the landscape and current color palettes. Instilling the aesthetic of mountain living, her subtle designs touch on place while leaving room for individual tastes and preferences. She finds her clients appreciate the lighter, sleeker look rather than the heavy woods and dark leather of the last decade.

“I like earth tones, but earth tones that reflect a more contemporary client, like grays, whites and even black,” she says.

Using contrast along with intriguing conversation pieces, Lohss adds depth and interest to a room, she doesn’t just change the color scheme. Never failing to incorporate a surprise element, Lohss found a Native American kettle drum and turned it into a table by placing a round glass top on it. By placing it on a graphic rug in front of an intimate fireplace, Lohss reimagined the room completely.

“I love to work with remodels,” she says. “Taking the existing space and creating something entirely different. That’s exciting.”

She tends to bring in contemporary art and furnishings while still working within the structure that’s there. However, light does play a big part in Lohss’ designs, it’s important to transform a space with good natural light. In this sense, Lohss doesn’t limit her designs to interiors. She isn’t afraid to work with the structure of a project to improve it, whether that’s taking out a wall or adding a window.

“My work background is well-rounded,” she says. “Not just about interiors but bringing the entire structure together with exterior finishes, attached architectural elements and materials. It’s all connected.”

Anything can become an inspiration. Whether it’s small towns in Montana or Soho shops in New York City, Lohss loves to travel, finding ideas and objects that normally might not be in a project’s plan. It’s that kind of playful elegance and serendipity that comes across in her style. She might blend an Asian piece with a newer “transitional” piece.

“One piece can get the ball rolling,” she says. “At some point in the project I usually find an item that really speaks to me or the client. Then things just springboard off that.”

The most important aspect of interior design is understanding the client, a talent which comes naturally to Lohss.

“I’m good at getting a quick read on the people I work with,” she says. “Meeting with them is key, even if it’s only for a few hours. I can get a lot from clients. Everyone is unique and has his or her own taste. It’s not about what I want, ultimately it’s for them — and that idea is always at the forefront of my mind.”

In a recent project Lohss teamed with Jeff Brandner of Brandner Designs for a client who wanted Lohss to reimagine her New York City apartment. For Lohss, it was an exciting project, working with a small space, rather than many of her larger projects in Big Sky.

For Brandner it was an opportunity to work with someone new.

“She’s seems a bit more on the progressive side with a modern sensibility for design,” Brandner says. “She uses cleaner lines and simpler designs that are also very well thought out. Simpler is really more complicated. You have to do more thinking to get all the details to work.”

He believes the job turned out very well.

“It was a small apartment so all the details in that kind of space matter,” he says. “She really was able to make it work.”

When Bayliss Ward, of Bayliss Architects, worked with Lohss he found her to be a team player.

“She was an important part of the team,” he says. “She’s very versatile, listens to everyone and can go with the flow.”

She contributed her own ideas to the project.

“She’s very creative,” he says. “At the same time she listened to what we wanted and that’s a huge plus. A lot of interior designers have their own concepts, but she was ready to run with our ideas.”

Whether taking on an entire project with architects and builders or working on a redesign one-on-one with a single client, trust is the one thing Lohss engenders across the board.

“Some people say, ‘Just surprise me,’ while others are very active in the whole process,” Lohss says. “We excel at detailed schedules, photos and communication that help with the overall design development and a great finished project.”

The lighter walls contrast the dark beams in this mountain home great room. The concept of light and dark is repeated in the furnishings combined with accents of graphic pattern. 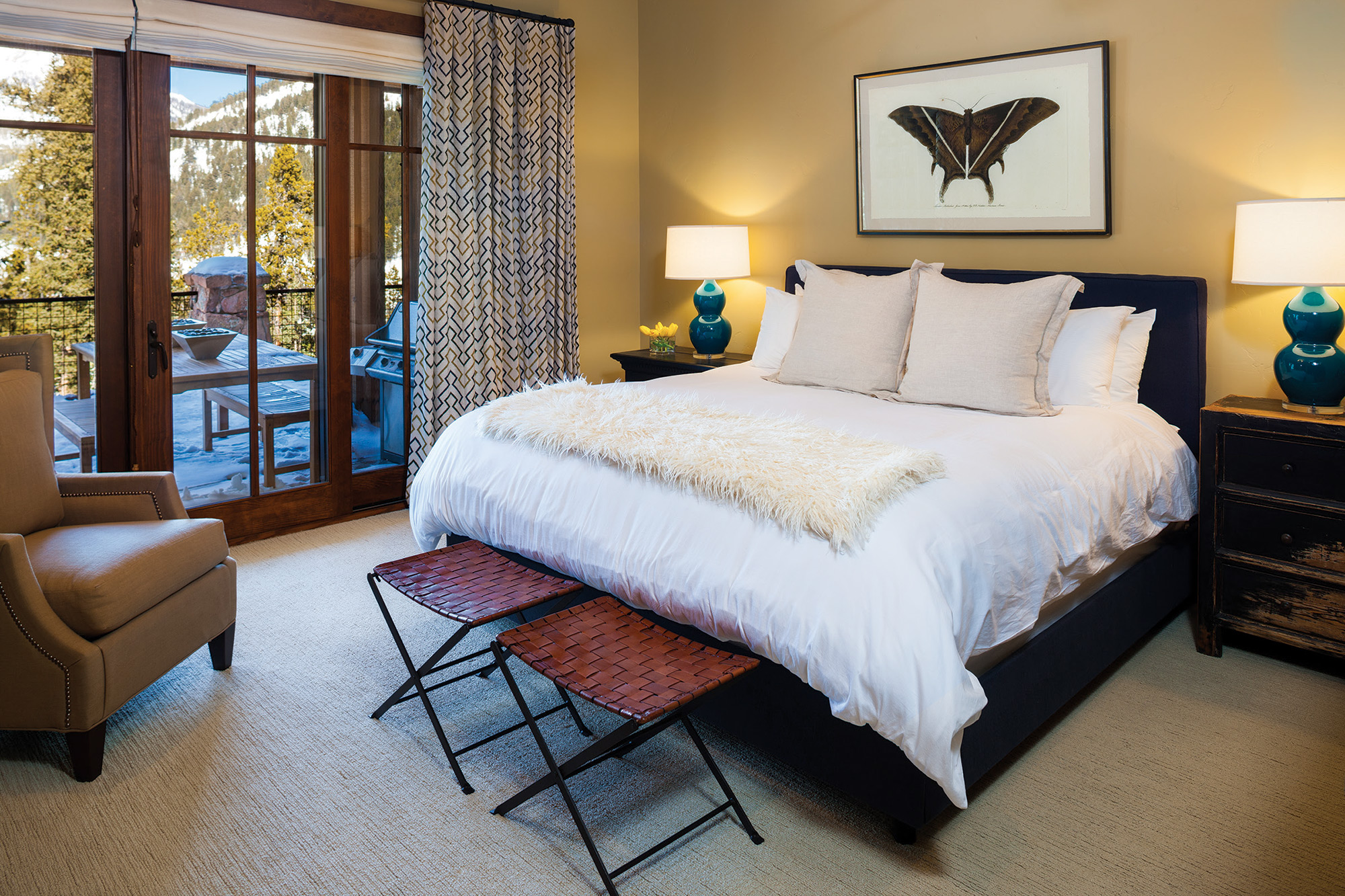 The juxtaposition of antique finishes with sleeker contemporary pieces, leather with fabrics and the lush texture of the carpet create a inviting space for guests. 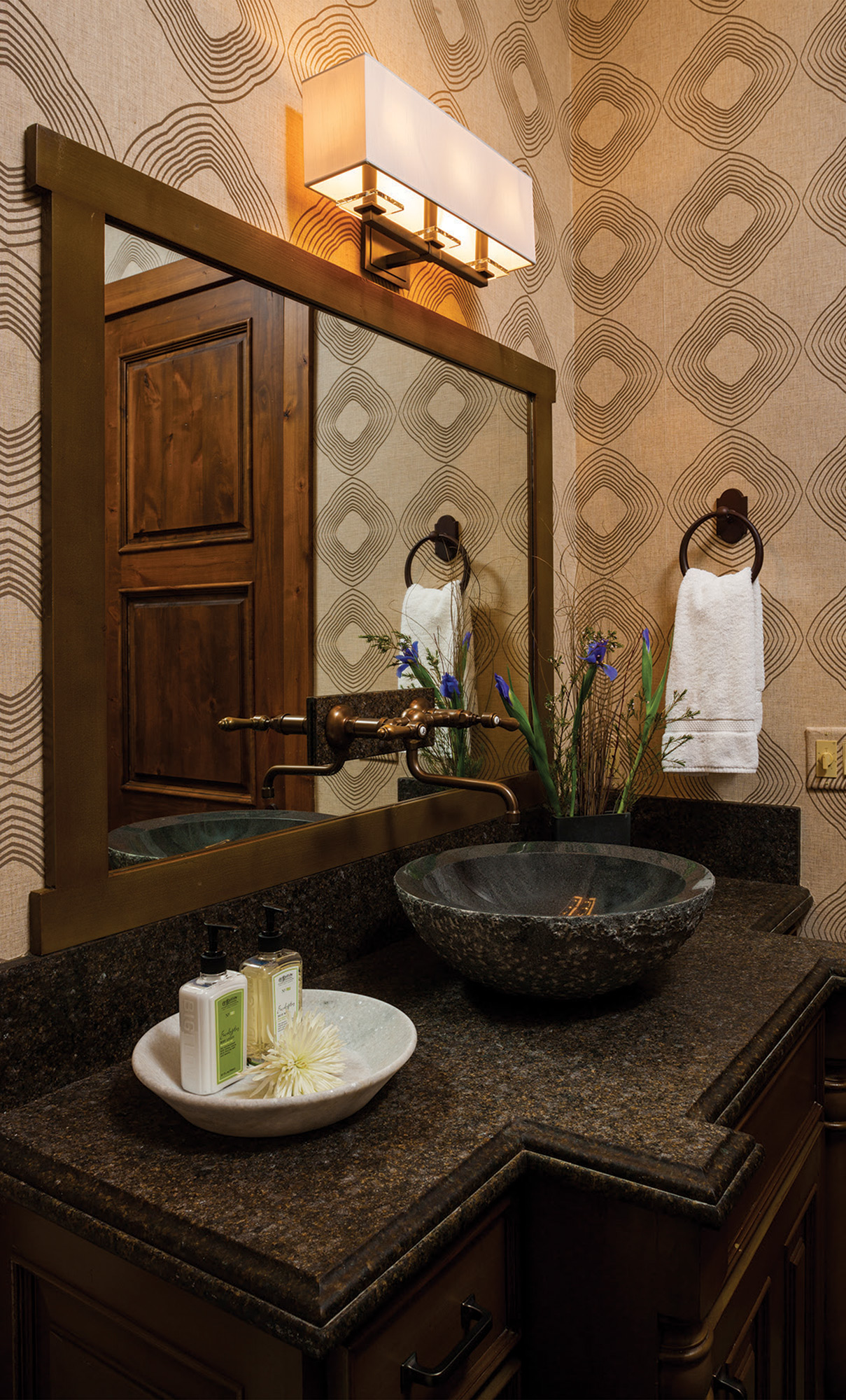 Using a bold pattern in a small space adds a unique element of interest giving a big bang to a small powder room. 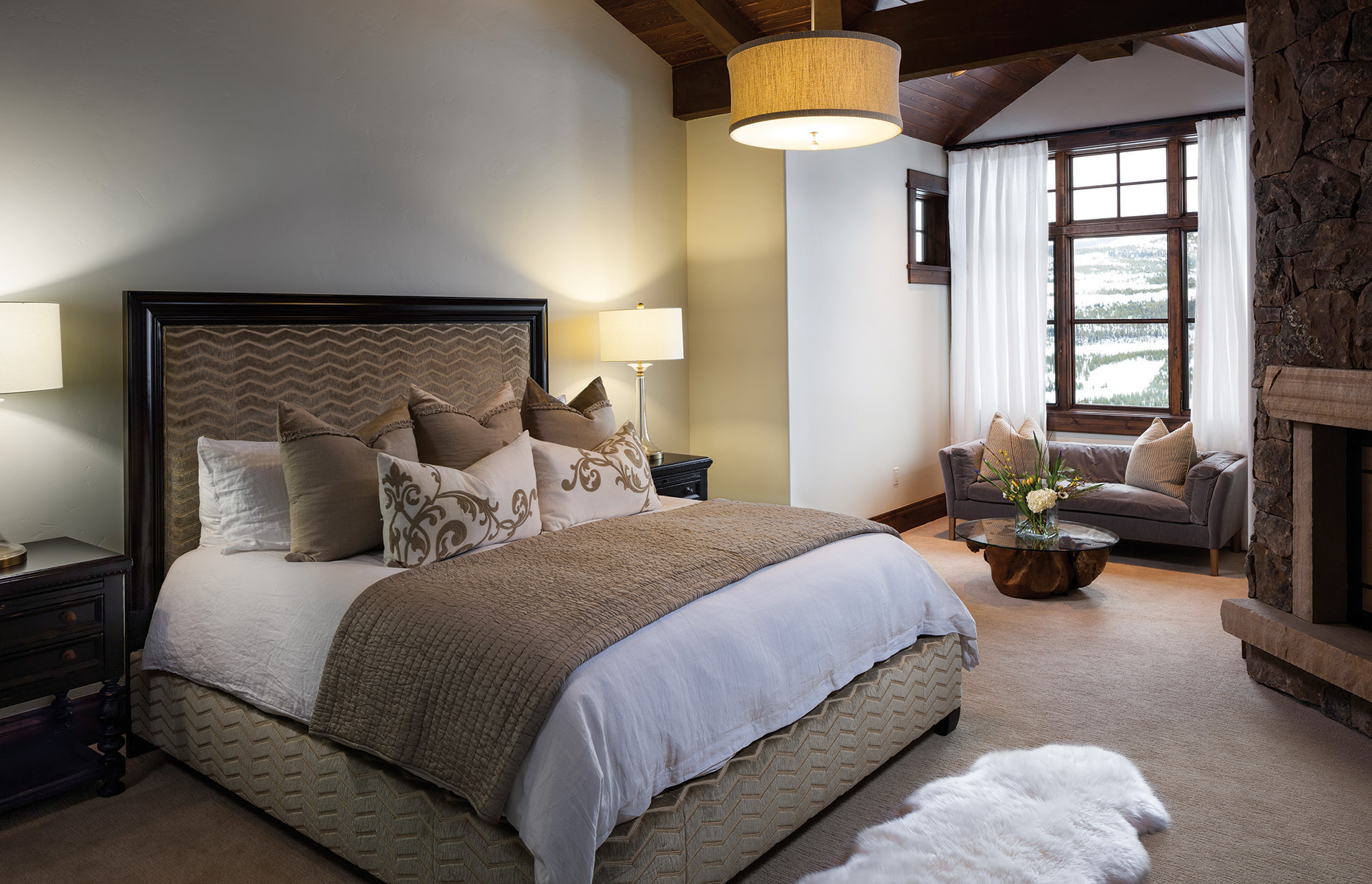 A soft neutral color palette creates a calming effect in the master bedroom. 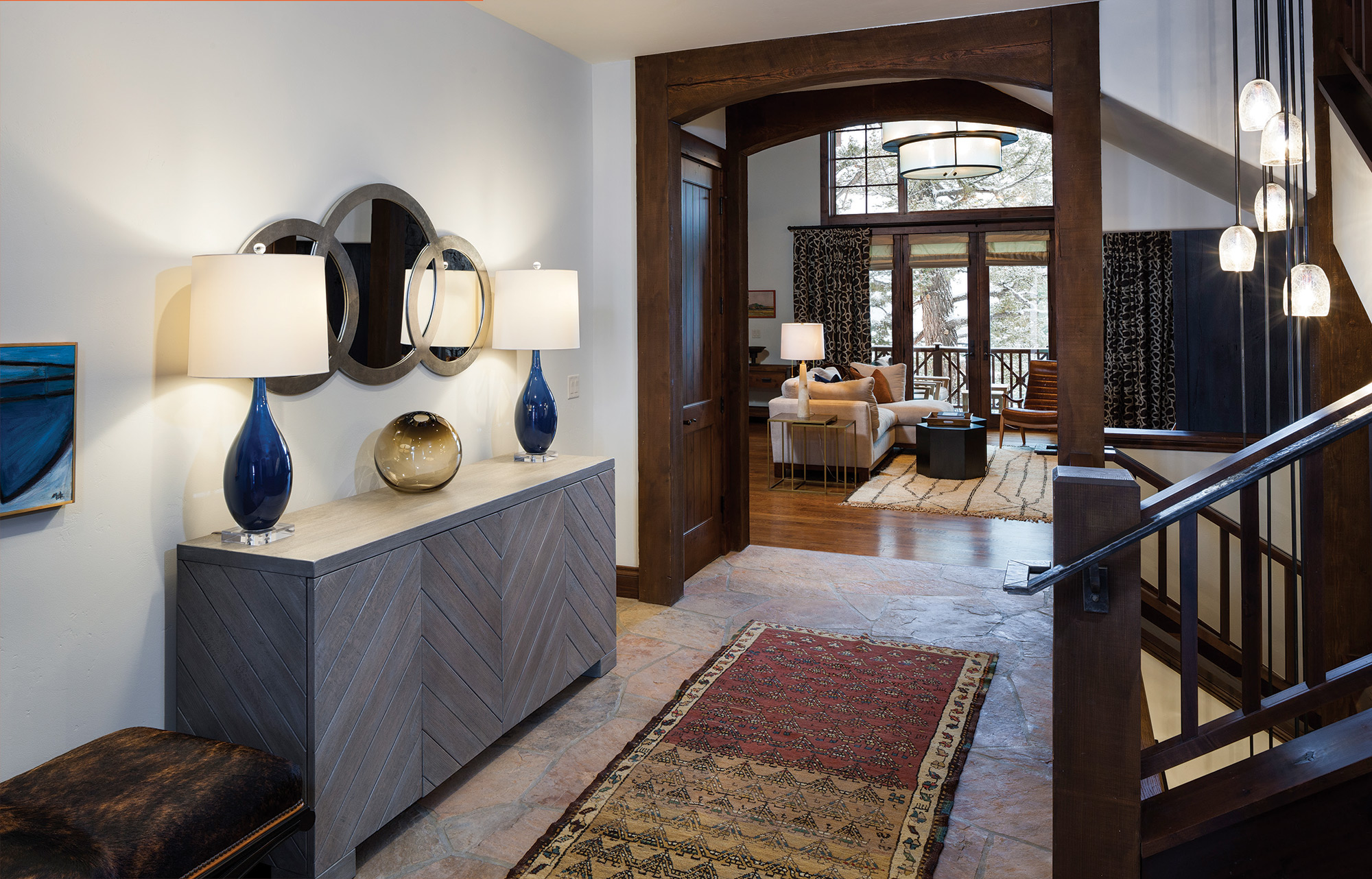 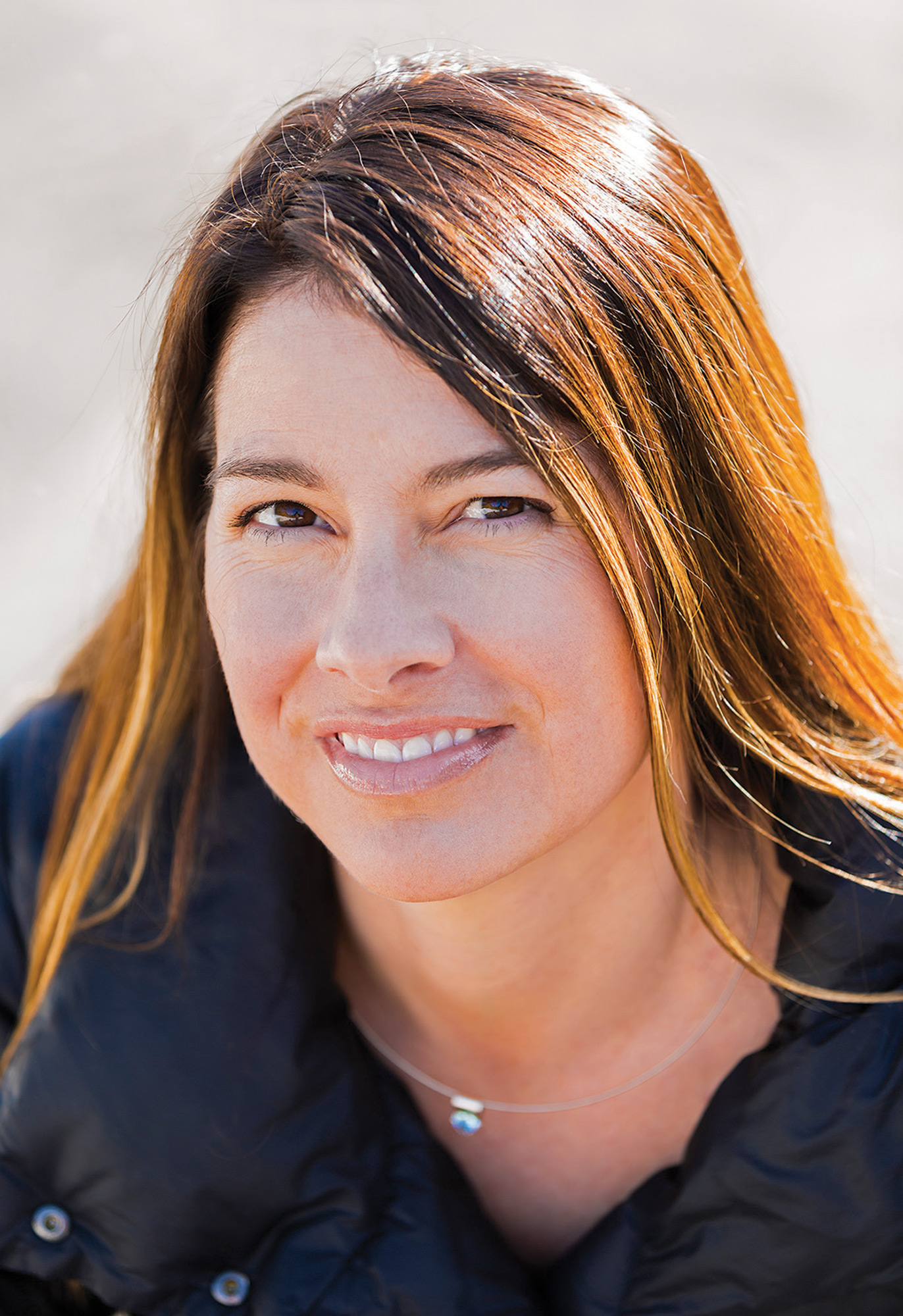 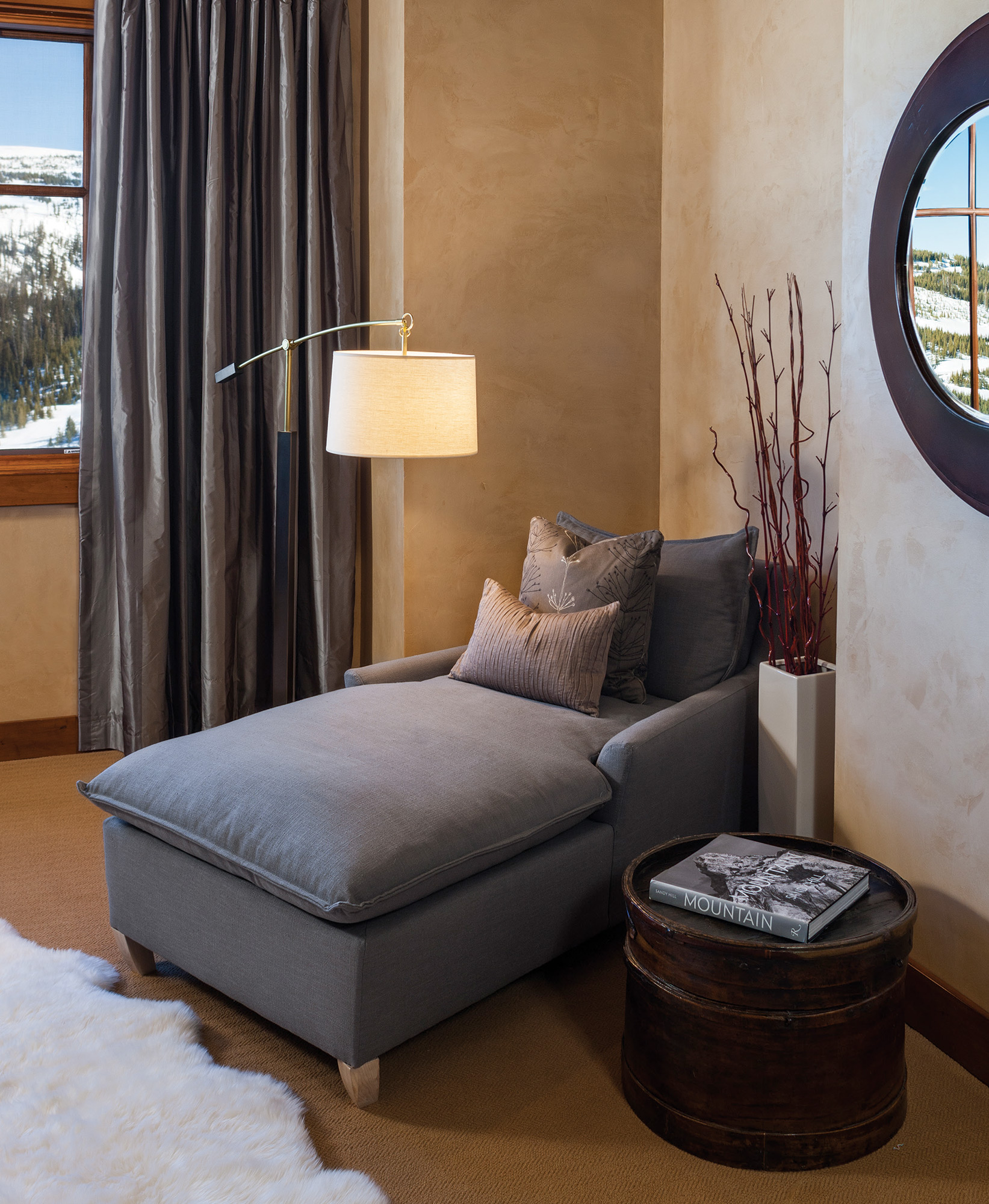 The down-filled cushions of the chaise allows for a contemplative moment to take in the landscape.