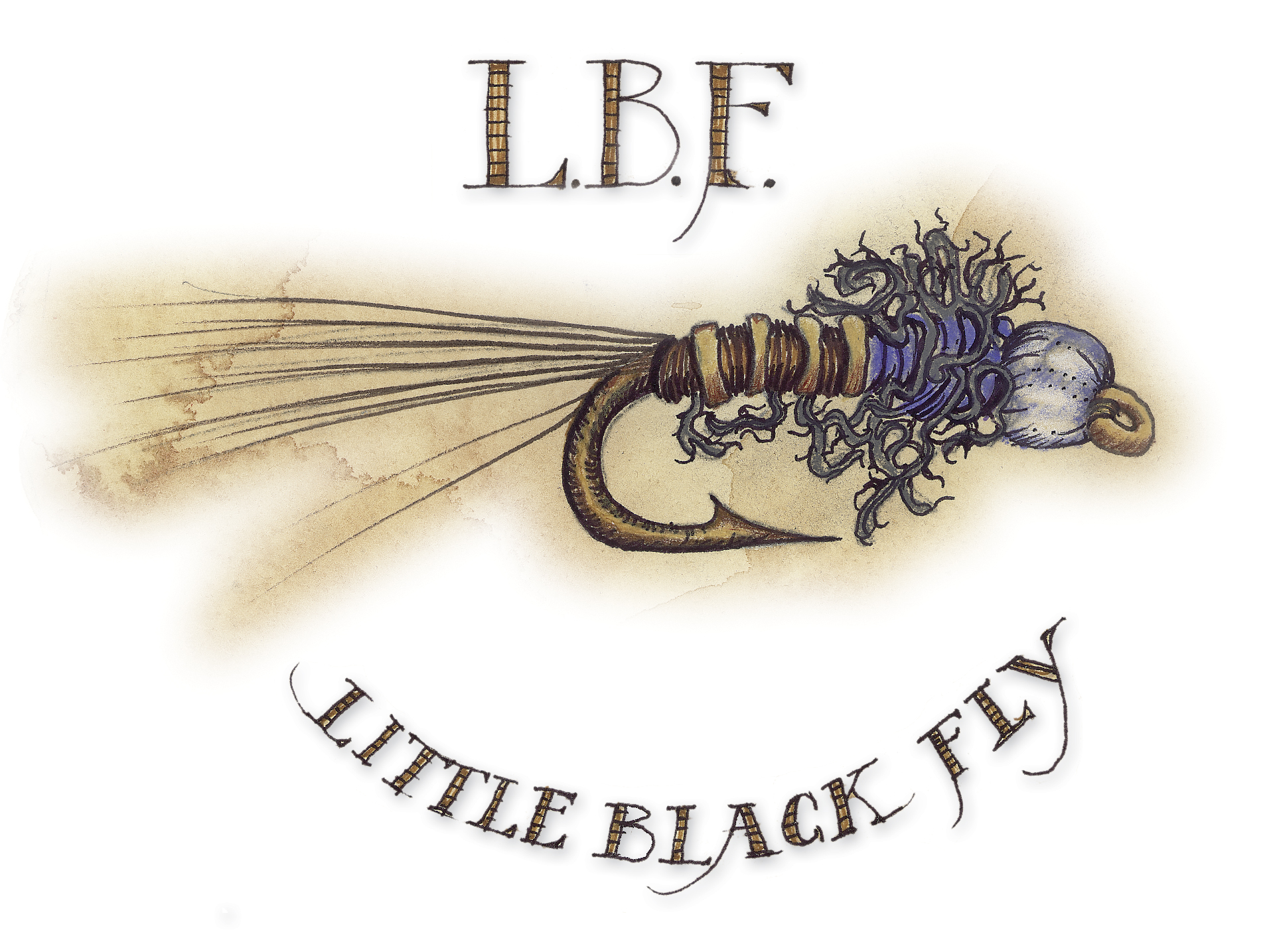 20 Aug Notebook: A Fly is Born

While Montana’s Bighorn River enjoys an international reputation for the quality of its trout fishing, even the most experienced anglers can encounter difficult days there. At times the stream’s complex hatches prove too tricky to match; on some late-summer days floating weeds make the water almost impossible to fish. But one spring day in 1999, Lewistown angler Dr. Pat Schelle, then a practicing surgeon as well as a fly-tying expert, faced a unique dilemma: The fish were too big for the flies he needed to catch them.

The fish were feeding on the little black mayfly nymphs that help prime the Bighorn’s food chain. Flies larger than #20 wouldn’t draw strikes, but the small gapped hooks used to tie those tiny patterns frequently straightened or broke outright when they encountered oversize Bighorn browns. Furthermore, even in size 20, the puffy peacock bodies and pheasant tail wing cases on Schelle’s standard imitations looked too fat in the water, resulting in refusals even after ideal presentations. To compound matters further, those delicate materials disintegrated quickly after encounters with fish, creating an expanding hole in Schelle’s fly box.

Most anglers would have chalked up those refusals and lost fish to the Bighorn’s inherent challenge, enjoyed what fish they caught and gone out for a beer. Schelle headed home to his fly-tying bench to build a better mousetrap.

JUST FOUR YEARS AFTER COLUMBUS’S FIRST VOYAGE, Dame Juliana Berners (who may or may not have been an abbess, and who may or may not have existed) received credit for the first written description of the fly-tying art in Treatyse of Fisshynge with an Angle. For the next several centuries, British fly-tying generally evolved along two lines: elaborate, gaudy salmon flies that didn’t resemble anything in nature and floating aquatic insect imitations that look like crude cartoons by modern standards. But both caught fish, and each school crossed the Atlantic to the Colonies.

Yankee ingenuity led to the development of countless new American fly patterns ranging from streamers and wet flies for North Woods brook trout to Theodore Gordon’s revolutionary mayfly imitations. Prior to the 20th century, virtually all of these innovations took place on the East Coast, largely because Westerners were still too busy staying alive to waste time dithering over selective trout.

While a number of pioneering anglers along the West Coast made early contributions to fly-rod disciplines as diverse as tying steelhead flies and tournament casting, fly fishing didn’t really become established in the Mountain West until after the Second World War. Its early proponents wasted no time developing important new fly patterns that have gone on to become standards far beyond their streams of origin.

New water in new country demanded new tying materials, especially when many of the exotic components of early British patterns became hard to find. Hair-wing dry flies, for example, were the brainchild of an otherwise little-known Idaho rancher named A.S Trude. (I’m old enough to remember when a whole series of hair-wing dries were called “Trudes”). Of course it was fly-rod pioneer Lee Wulff who brought the concept to fruition with the patterns that bear his name, but it was Livingston icon Dan Bailey who talked their modest inventor into naming them “Wulffs.”

That was hardly Bailey’s only contribution to the genre. Although Minnesota angler Don Gapen tied the first Muddler Minnow as an Eastern brook trout fly, it was Bailey who tweaked the pattern into the form that eventually found its way into flyboxes around the world. Bailey also modified the original Humpy into its high-floating Western equivalent, the Goofus Bug. Meanwhile, Charles Brooks was refining important nymph fishing techniques in Montana headwater streams and inventing patterns like the Montana Stone, and West Yellowstone angler Dan Martinez was developing the Woolly Worm. When I caught the first brown trout of my life on that pattern in the 1950s, I was too young to appreciate what was on the end of my tippet. Like the Muddler, the Woolly Worm eventually sired a host of children including the Woolly Bugger and Egg-Sucking Leech, staples among Pacific salmon and steelhead anglers for decades.

When Pat Schelle retired to his tying bench to solve the problem of the Bighorn’s little black nymphs, he was continuing a historical tradition of creative fly-tying as old as Montana trout fishing … and ultimately stretching back to the British Isles five centuries earlier.

JUST LIKE COOKBOOKS, fly-tying articles eventually demand a recipe, and we’ll get to that boring necessity in due course. But first, a look at the creative process behind it.

Schelle knew that small imitations didn’t necessarily need to be tied on small hooks — Atlantic salmon anglers had been proving that for years with sparsely tied patterns several sizes smaller than their hooks. Since a #20 mayfly body is about 5 mm long, he simply tied a fly that size on a #16 heavy nymph hook and ignored the shank left trailing out behind, as did the trout. To avoid the bloated appearance of most conventional patterns, he decided to tie the body with plain black 6/0 nylon thread ribbed with fine gold wire. He wanted the fly to demonstrate movement in the current, so he included a tail of soft, black hen hackle. All this went behind an Arizona peacock thorax brushed out for flash and movement. After some hours of experimentation at the tying bench, voila: the LBF. (The first two letters stand for adjectives describing the pattern’s size and color; the third is a noun. Take it from there yourself.)

The pattern immediately proved effective on trout in a number of Montana waters, as Schelle and a handful of enthusiastic test drivers like me soon proved. Its particular utility reminded me at once of standards like the Adams and Gold Ribbed Hare’s Ear in that it looked a little like a lot of things, but could still catch selective trout. It also proved far more durable than its predecessors, and stood up better to large fish. Like many successful patterns, the LBF quickly began to generate variations on the original theme, including optional bead heads and mylar flashback wing casings. Schelle attributes the effectiveness of the series to the flies’ trim outline and the motion the components of the tail and thorax create in the current. Only the fish know for sure, and they’re not talking.

Will the LBF become an important standard or another “mother” pattern like the Muddler Minnow and Woolly Worm? Only time will tell. But its invention illustrates the ways creative Montana anglers have been solving problems at the tying bench since the earliest days of fly-rod angling in the Mountain West. 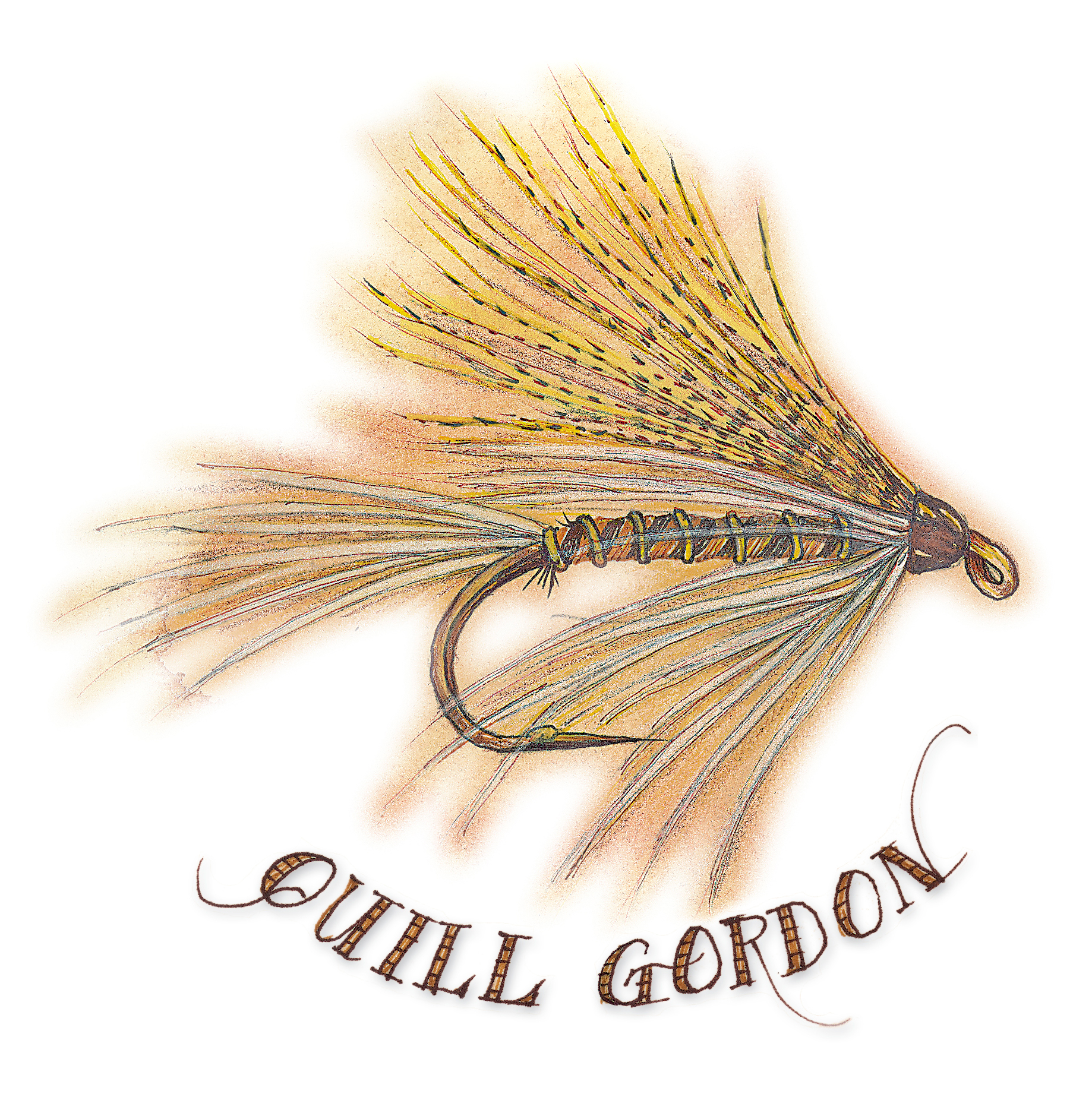 The Quill Gordon is an example of Yankee ingenuity which led to the development of countless new American fly patterns ranging from streamers and wet flies for North Woods brook trout to Theodore Gordon’s revolutionary mayfly imitations. 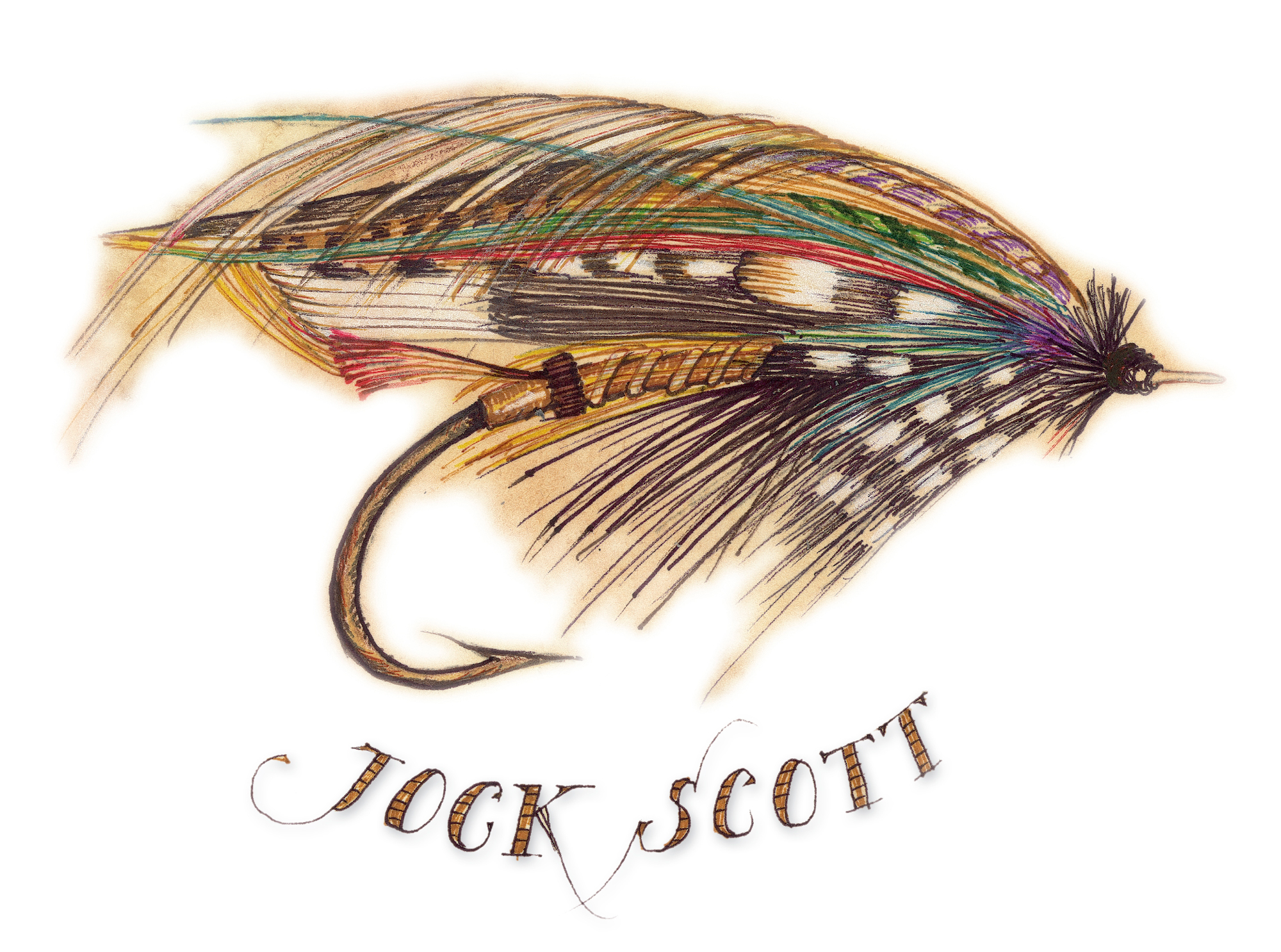 The Jock Scott is an example of British fly-tying, which generally evolved along two lines: elaborate, gaudy salmon flies that didn’t resemble anything in nature, and floating aquatic insect imitations that look like crude cartoons by modern standards. 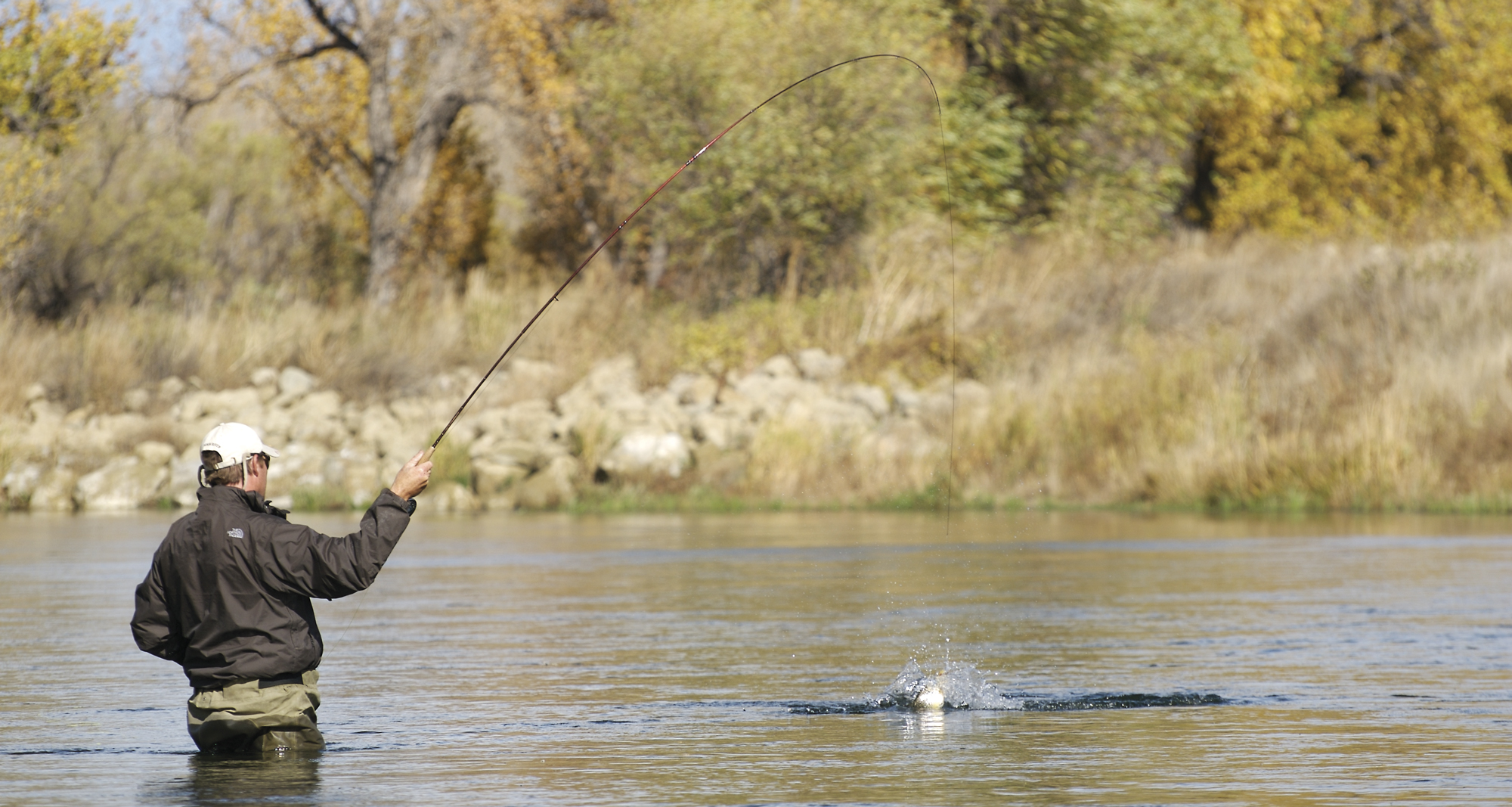 Hooking up on the Bighorn… birthplace of the LBF. 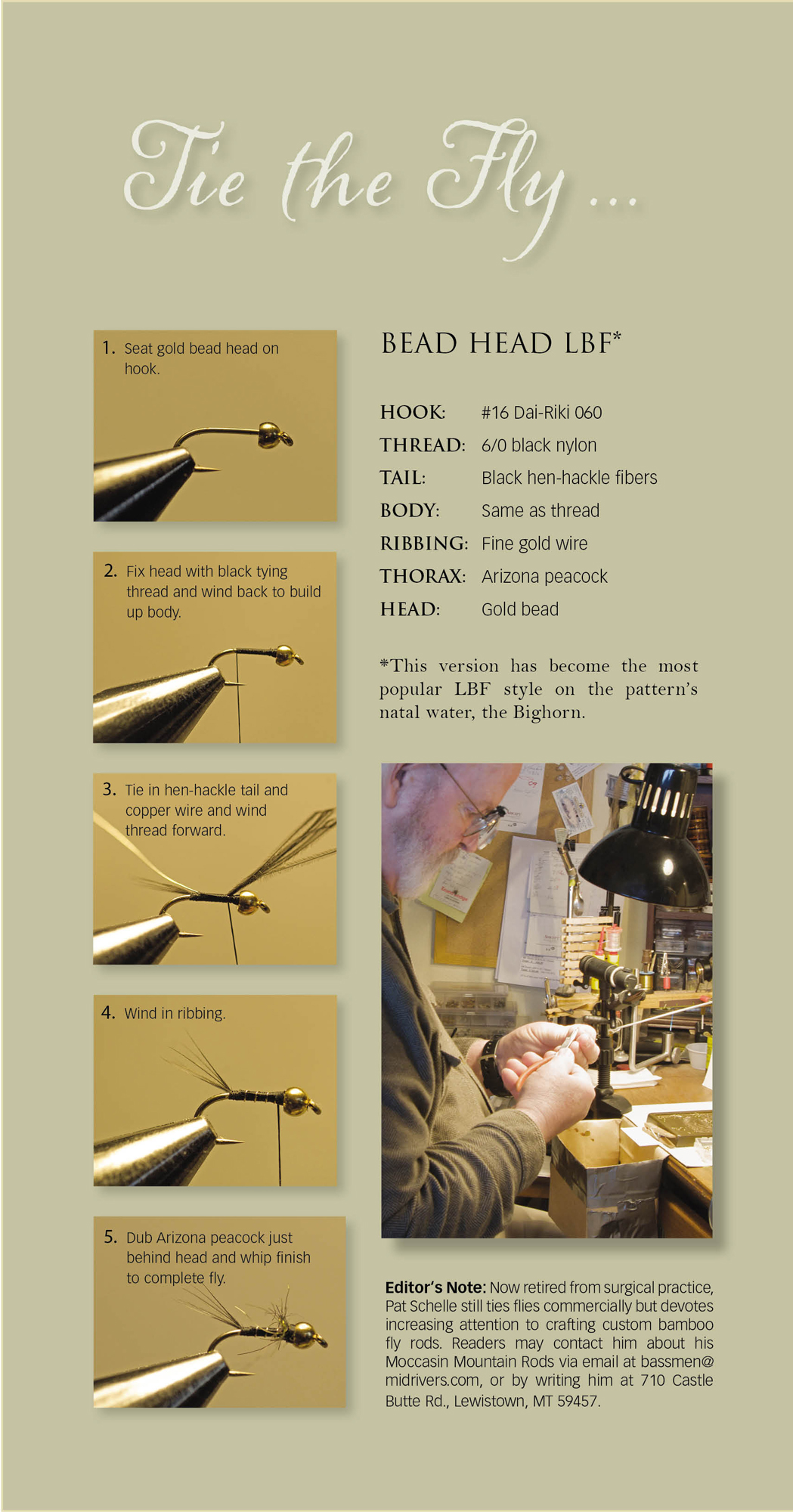 When Pat Schelle retired to his tying bench to solve the problem of the Bighorn’s little black nymphs, he was continuing a historical tradition of creative fly-tying as old as Montana trout fishing … and ultimately stretching back to the British Isles