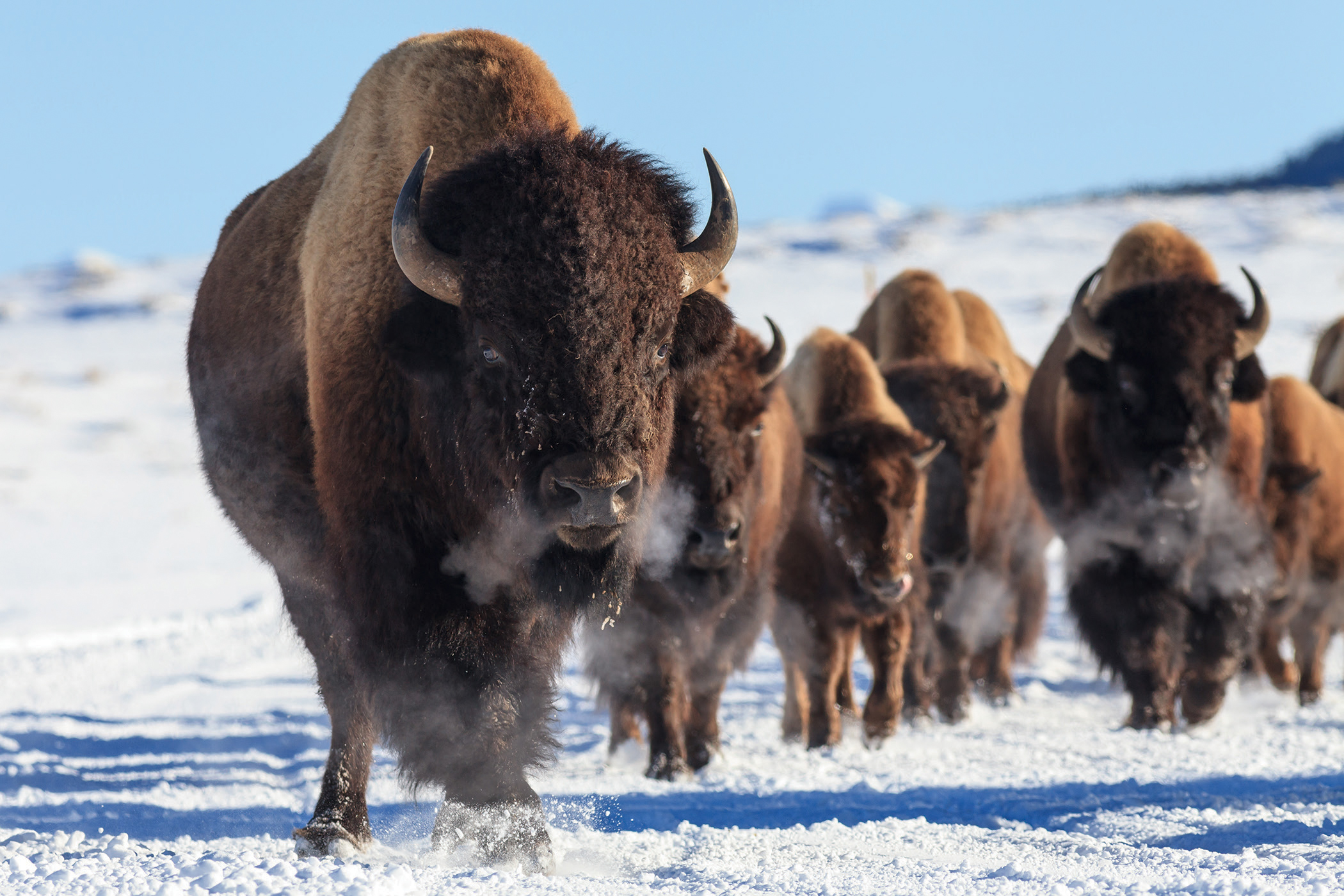 09 Dec Round Up: Winter Wildlife Watching

When the Western landscape is covered in a blanket of snow, the temperatures plunge, sometimes into the negatives, and darkness comes about by late afternoon, it’s hard to imagine that a thriving wildlife population is out there surviving the hardships that winter brings. While some birds fly south to warmer climates and bear populations hole up for hibernation, many species stay put, often coming down to lower-elevation grazing grounds to survive the season. Here, Jason Williams, owner of Jackson Hole Wildlife Safaris in Wyoming, and Ken Sinay, director of the Bozeman, Montana-based Yellowstone Safari Company, offer tips for spotting wildlife in the winter. 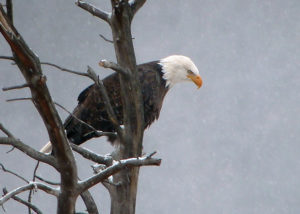 Jason Williams: Winter in the Greater Yellowstone Ecosystem (GYE) offers the opportunity to observe some of the greatest adaptations of wildlife. For many species, migration and methods of energy conservation are key, which means they come down to lower elevations where we have better viewing access, and they are often more stationary and out in daylight hours to soak up some of the sun’s warmth. All of this combined makes it a unique and plentiful time to watch wildlife that stands out against the white blanketed landscape.

Ken Sinay: Simply surviving the winter is the guiding force in an animal’s behavior, motivation, and therefore visibility. I think of winter as a season of big animals on big landscapes: elk, mule deer, bighorn sheep, American pronghorn, white-tailed deer, and, when in the area, even bison and moose. Winter range is characterized by lower elevations where there is less snow, warmer air temperatures, and frequent windblown landscapes allowing some plant forage. This may put them close to roads, making them easy to see. And, there are generally fewer people out, so the isolation of being in your own small group lends a wonderful closeness to the natural world and the drama of winter survival.

Which animals are more frequently spotted this time of year and why?

Williams: Winter is the season of the wolf and one of the big attractions of viewing wildlife in the GYE. The hunting activity of the wolves shifts to follow prey, bringing them down into lower areas where we can sometimes view them. Also, they often mate in February, which can be associated with interesting social behavior between individuals and the packs. However, they are still fairly elusive, and we find a lot of other interesting wildlife in the winter like moose, elk, bison, and the lucky sighting of a red fox or coyote hunting in the snow.

Sinay: Predators are active and almost constantly in motion. In general, the smaller the predator the more active. A red fox has less body mass, so it is not as capable of tolerating the cold as a wolf. And it’s feeding on smaller food items — think mice instead of elk — so it has to forage more. Probably the most beautiful and active animal I see is a colorful red fox mousing. I have no favorites, but a red fox on a continuous snow-covered landscape is hard to beat. And in Yellowstone, we see wolves and coyotes more frequently than the red fox, even though that species is common throughout most of the Northern Hemisphere. 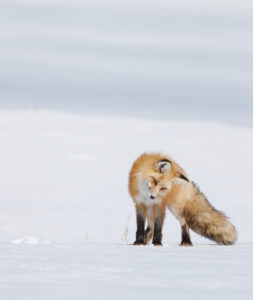 Is it easier or harder to spot animals in the winter?

Williams: In general, it’s much easier, especially when there is enough snow that the landscape is painted white, making it easy to spot the dark mammals that are active in the winter. This is why some species change their coats from brown to pure white in the winter to camouflage better. Luckily for us, that is only a select few, and we are able to also take advantage of the lack of sagebrush that they have to hide behind.

Sinay: A continuous snow-covered landscape makes it easy to spot big herds and animals close up. Many, like wolves and coyotes, may become more nocturnal to avoid humans, but if they are young — think naive — or if they simply feel more secure — like in a national park or a Montana Wildlife Management Area where access is prohibited — they may be much more active and easier to see, not only because of the continuous unbroken snowy landscape, but also because they must eat. Many people mistakenly think of animals as cryptically colored or camouflaged. This is true in some cases, but not in all, and certainly not during certain seasons, conditions, or behaviors. All animals can be seen, the first step is to try.

What are the top three tips would you offer people for winter wildlife watching?

Williams: One, keep your binoculars close to your body, so they don’t fog up when your warm eyes get close to the cool glass. Two, pause often and listen to the unique silence in winter — you never know what you might hear. Three, bundle up and remember your sunglasses and sunscreen, which may be counter intuitive to many, but the reflection of the sun on the snow will sneak up on your skin quickly and can be harmful to your eyes.

Sinay: Warm clothes, so you can stand out in the open for an extended period of time, and throw in a thermos of cocoa! Optics: binoculars and spotting scopes ideally for each member of your party. And consider a window-mounted spotting scope, maybe one for the front and back seat in your vehicle. This allows you to use the vehicle as a blind and for shelter.