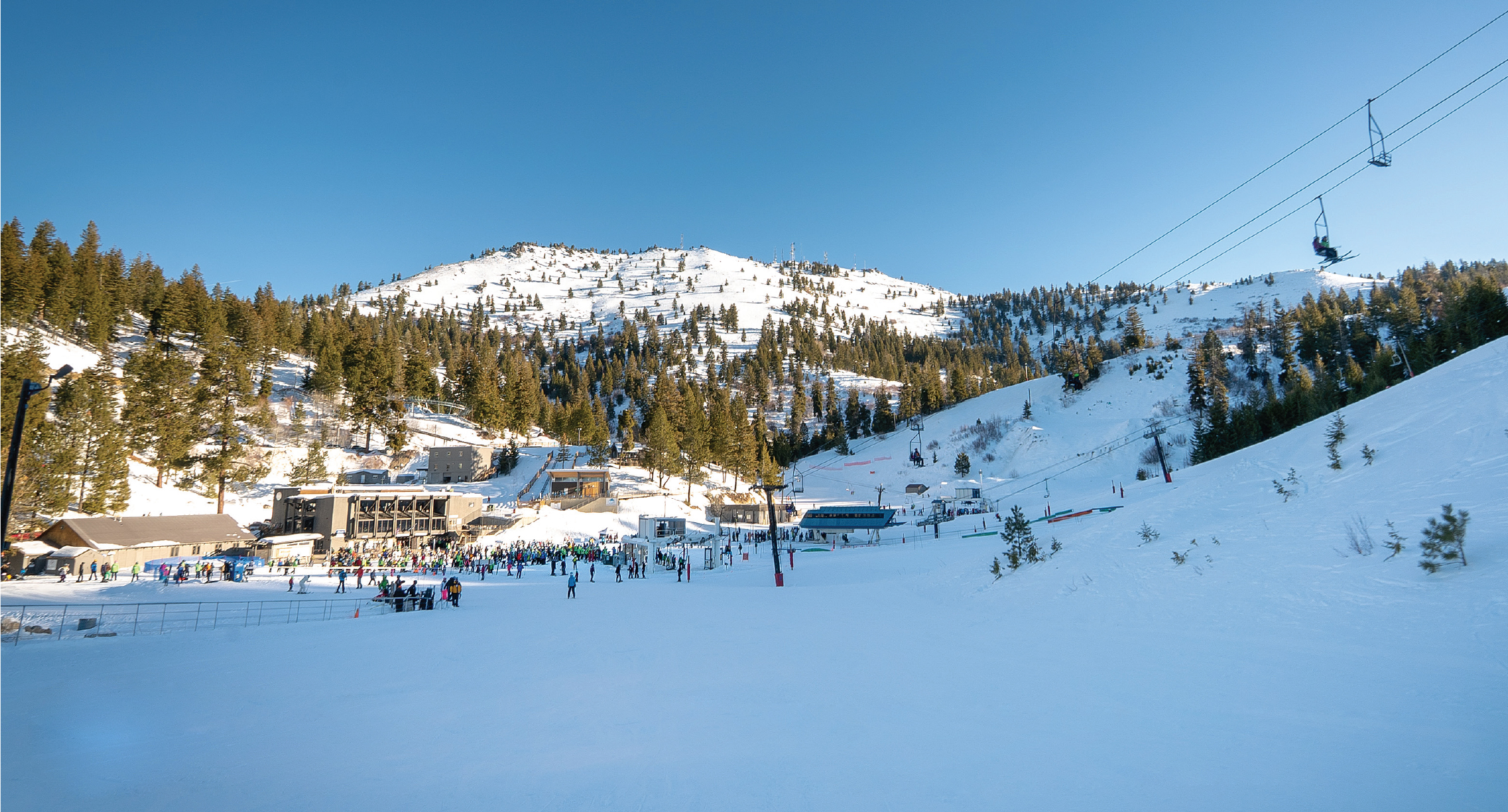 11 Dec Outside: Ski the Mountain

Just south of McCall, Idaho, at what’s known as the McCall Activity Barn, my family and I stepped into our cross-country skis and glided into a gray ocean of fog. Our 12-year-old son Anders took the lead, keeping his skis in the tracks so he wouldn’t get lost. He soon disappeared from our sight.

As my husband, our 10-year-old son Finn, and I followed, I thought back to a passage I had read in a book on our drive to this small mountainous town in Western Idaho, about two hours north of Boise. In Ski the Mountain, Helen Markley Miller describes a winter in 1902 when 14-year-old twins, Gordon and Molly, skied in the same area where my family now explored.

The passage reads, they “found themselves in the gray mass of cloud that had rolled from the peaks to conceal the valley floor. Gordon knew when they reached the flat only because his skis no longer tipped downwards, but he could not see their tips, could not see the small pitches and rises of the not too level terrain.” 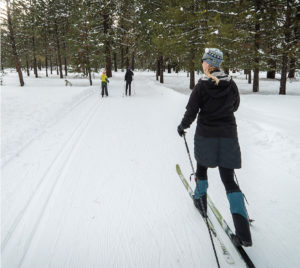 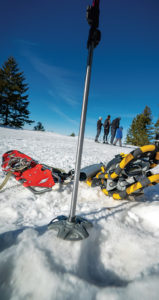 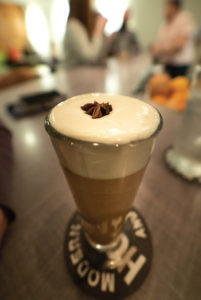 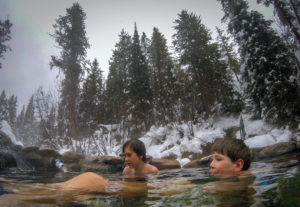 We, too, felt where we were going more than we saw it. When our skis stopped running, we knew it was time to climb the small hills. When we started sliding, we bent our knees a little bit and enjoyed the glide until it petered out, and it was time to put some more muscle into it.

“He felt as if he swam in a gray ocean of fog and snow, glided on a world of gray,” Miller writes. “By concentrating, however, he found that he could easily follow the deep tracks, because his skis slid more easily in them than in unbroken snow.”

And so it was for us. We put our skis in the tracks and glided through the fog engulfing the entire Long Valley.

When we travel, I like to read books set in the area. Ski the Mountain was the perfect selection for our family trip to this small resort town on the southern edge of Payette Lake. While life is much different here than it was for Miller’s characters in 1902, or even for Miller herself when she wrote the book in 1965 from her McCall home, much of the natural world remains the same.

To the west, the granitic West Mountains form one boundary of Long Valley, and McCall sits near the valley’s northern terminus. Payette National Forest runs along the north and east, full of rivers, conifers, hot springs, and recreationists. It has one of the highest average snowfalls in Idaho — perfect for winter recreation today, but challenging for the early white settlers.

Gordy and Molly learned to ski that winter from an old Swedish trapper named Lars. Their father had died the year before in an avalanche, and it was up to the kids to keep the family ranch going and figure out a way to make it profitable. Gordy and his mother hated the isolation, and they were waiting out winter to make their escape back East. Only Molly loved her wild, Idaho home. Learning to ski with Lars, having a winter adventure, and managing to find a way to make money, changed all of that for Gordy.

We don’t have to be persuaded to love winter. Of course, we weren’t freezing in an old ranch house with the nearest neighbors miles away. We stayed in a lovely hotel in McCall and spent a morning soaking in hot springs before taking a lazy snowshoe walk in Ponderosa State Park. Instead of the little bit of food Gordy’s family could scrape up, we chowed the ridiculously delicious, locally made Stacey Cakes ginger cookies, ate at local restaurants, and sipped craft brews after a day in the snow.

Even without all those comforts and splurges, I think we would love winter. When you live in the Rocky Mountain West, you better figure out a way to embrace the cold and snow.

When Lars taught Gordy and Molly to ski, he told them, “I teach you the joy of the ski. Then you will like time when come snow. You will feel only pleasure when you see ahead big mountain of snow which drop down, down, and down.”

Our family finds joy atop two boards gliding through meadows and sliding down mountains. Visiting McCall in winter is a chance to explore somewhere new, but close by, and relish “the joy of the ski.”

For the people living in the Long Valley in 1902, skiing was the only way to get around in the mountains when the snow set in for winter. We didn’t have to ski, we just wanted to. Molly and Gordy learned from Lars to make their own skis, but we purchased ours at Timber Trails in Livingston, Montana, and let someone else do the engineering. On our 21st-century gear, we could maneuver, turn, and go as fast or slow as we wanted, or our bodies would allow.

As Henry, Anders, Finn, and I finished our ski tour, full of the “joy of the ski,” the gray mist started to clear. The sky turned bright blue, dotted with white, fluffy clouds. We watched as mountains emerged from the distance and framed the valley.

A cowboy ran two draft horses toward us. As if our winter adventure of downhill skiing, hot springing, cross-country skiing, and snowshoeing didn’t have enough iconic Western winter experiences, it was time for us to get into a two-horse open sleigh. 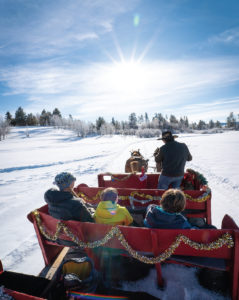 We spread wool blankets on our laps, sipped hot chocolate, and wondered how it could get any better than this. Like us, Gordy and his family rode in a horse-drawn sleigh to their neighbors house for Christmas. But I don’t think they had hot chocolate or someone to ensure their experience was comfortable.

As we took off across the meadow, sleigh bells jingling, we imagined we were going to visit someone. A view of the great range, high peaks glinting in the sun, towered over the lake and flats. We were probably seeing almost the same sights Gordon and his family would have seen.

Reading Ski the Mountain while exploring the area around McCall gave us an appreciation for what it would have been like to live here at the beginning of the last century. It was a very different experience, but I think we appreciated the snow and the mountains as much as the characters in the book did — or learned to. Gordy may have been surprised to have fallen in love with this place, but McCall and Long Valley had my heart from the beginning.

When she isn’t traveling the world, Melynda Harrison writes for local and regional publications, newspapers, and websites from her base in Livingston, Montana. Her company, yellowstone trips.com, specializes in vacation coaching and itinerary building for Yellowstone National Park. She shares her family’s travel and outdoor recreation adventures at travelingmel.com.