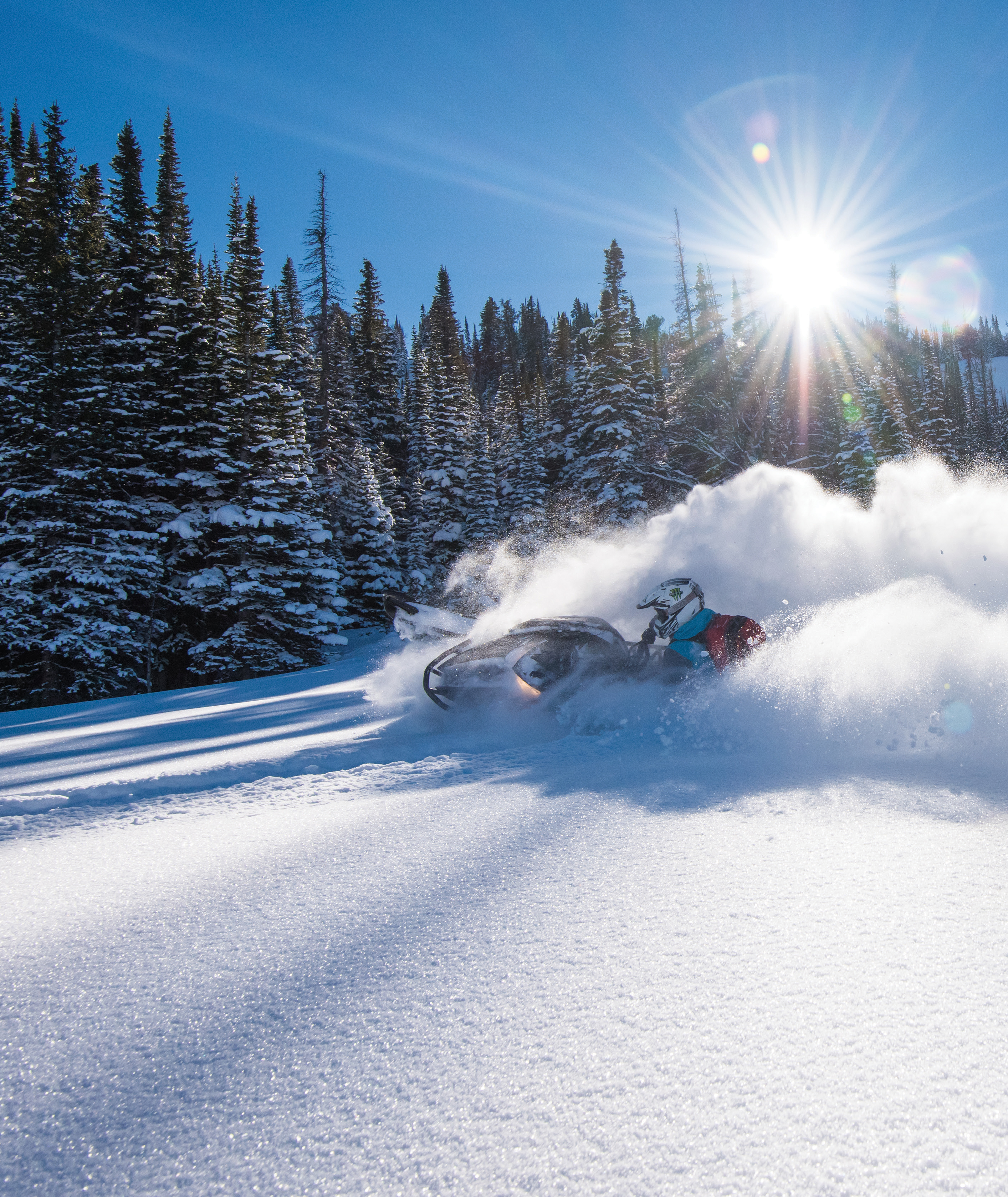 The evolution of snowmobiling in Montana

11 Dec Higher on the Mountain

IMAGINE, FOR A MOMENT, a stereotypical snowmobiler. If mullets, heavy metal, diesel trucks, and garish neon apparel trimmed with checkered flag graphics come to mind… you’re not all wrong. But the clichés of that culture don’t represent the whole story, especially in the mountains, where over the last 20 years snowmobiles have become purpose-built technological marvels, and their pilots have developed ways of riding that demand athleticism, skill, and plenty of mountain sense. These days, snowmobiles (or sleds or snow ponies, as the cool kids call ‘em) can go darn near anywhere in alpine settings, and the experience is more dynamic, thrilling, and dangerous than ever. 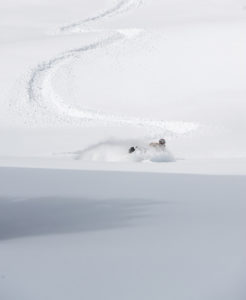 Some skiers who have traditionally used sleds for back country access, now spend as much or more time riding as they do skiing.

Whether you’re on skis, a snowboard, or a snowmobile, getting on edge and carving turns is an apex experience that can be highly addictive. “In powder, sledding’s like hovering above the ground with total control — the lightness and smoothness is unbelievable,” explains Big Sky photographer and lifelong snowmobiler Ryan Turner, who contributed his photography to this article. “There’s this depth; you create the line, and you can be moving fast or slow, above the snow or down in it.”

The difference between skis or snowboards and a snowmobile is that sleds can carve uphill, downhill, sideways; they’re multidimensional and undeniably fun. But they weren’t always this way.

Like many riders in Southwest Montana, my first experience with snowmobiles was using them as a means to access remote backcountry ski lines and ice climbs. Those early machines from the ‘80s and ‘90s were heavy, underpowered, difficult to maneuver, and handled deep snow about as well as the Titanic handled icebergs. They often were more trouble than they were worth, and my friends and I spent long hours digging out stuck machines. Fast-forward to 2019, and technology has changed to such a degree that it’s almost a new sport altogether, allowing access to entirely new parts of the mountains. 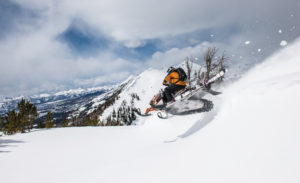 Before the mid-2000s, most people who rode in the mountains modified their machines extensively — much like the 1950s hot-rodders did — to maximize marginal deep-snow performance. Perhaps the most common addition was a longer track to provide greater flotation, and also taller track paddles to provide more forward traction. Of course, it takes more power to turn longer, taller tracks, so engine modifications came next, along with lightweight parts, performance clutches, exotic materials engineering, and the list goes on.

In 1999, a top-of-the-line Polaris RMK (Rocky Mountain King; the best-selling mountain snowmobile model in history) weighed 500 pounds, came with a 120-horsepower engine, a 136-inch-long track with 1.5-inch-deep lugs (also known as paddles, these are the part of the track that provides traction), and had suspension, geometry, and handling that was best suited for racing across flat lakes. Today, snowmobiles come from the factory weighing under 450 pounds with 170 horsepower engines (which many top riders reliably turbocharge or supercharge to 200-250). This power-to-weight ratio is comparable to $12 million Formula 1 race cars. To put power to the ground, stock sleds now come with 3-inch lugged tracks up to 174 inches long, backed by incredible agile suspension geometry that climbs, carves, and sidehills effortlessly. 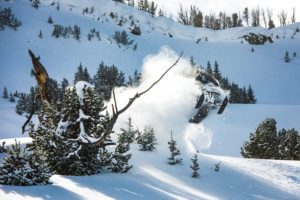 “Riders used to be able to get places, but it wasn’t graceful,” says Turner. “Now, sleds are like an extension of your body. It’s not about muscling, even though these are still big machines. It’s about finesse, finding the balance point, and using it.”

Allen Steckmest, a Bozeman-based ski guide, avalanche educator, and longtime rider, compares the new style of riding to that of a dirt bike. “You’re more active, more athletic, up high, leaning, and absorbing the terrain,” he says. What all this really means is that modern snowmobiles can go places and do things never before thought possible — and that the sport is more accessible to people who want to ride, rather than be stuck.

Alpine snowmobilers today are less Bud Light and more Red Bull. Ask anyone who rides in the mountains, and they’ll describe a changing demographic, with many people (like Turner, Steckmest, and myself) coming to the sport from skiing or snowboarding. “I originally just wanted to get further away from other skiers in the backcountry,” Steckmest says. Now, he enjoys snowmobiling so much that he often leaves his skis at home — a common story among backcountry sledders. “These [skiers and snowboarders] are into riding powder; they’re athletic, they’re educated about avalanche hazards, and they pick it up super fast and become good riders,” Turner says. “There’s still the [sled] crew that’s always been there, but this is the new demographic.”

At least, those who can afford it: A new snowmobile ranges from $12,000 to $16,000, and requires a truck, trailer, gas, oil, avalanche safety gear and education, protective gear, apparel — the list goes on. “It’s an expensive sport,” Turner says. “It just is.”

But with the power and speed to travel dozens of miles a day over complex backcountry terrain, the agility to climb, traverse, and descend steep slopes, and the floatation and traction to power through waist-deep powder, mountain snowmobiles are growing in popularity, and riders are pushing the limits of what’s possible. Technical riding in dense, unforgiving trees, and on steep slopes — where riders can showcase their skill, agility, and their machine’s performance — is popular. And with more than 15 inches of suspension travel in addition to the cushion of deep mountain snow, many riders are comfortable launching their sleds off cliffs, cornices, and jumps. “There’s not a lot of terrain you can’t ride sleds in anymore,” Steckmest admits. Turner describes seeing people hitting 100-plus foot jumps, and riding up chutes, couloirs, and mountaineering-type terrain on a routine basis. “It’s a little crazy what people are doing,” he says.

With machines capable of going virtually anywhere, and an increasing number of riders capable of putting them there, snowmobiling has, of course, produced some conflict. Snowmobilers ride largely on public land, but when the last Forest Service Winter Travel Plans were drafted (mostly in the 1990s and 2000s), sleds were mere shadows of the beasts they are today. With snowmobilers penetrating deeper and higher into areas previously thought unrideable (terrain that was once the domain of mountain goats and hardy ski mountaineers), some other user groups are calling foul. “You can be two valleys away and hear these things,” Steckmest admits. “They’re just really loud, and if you’re not on one, it’s not that much fun.” 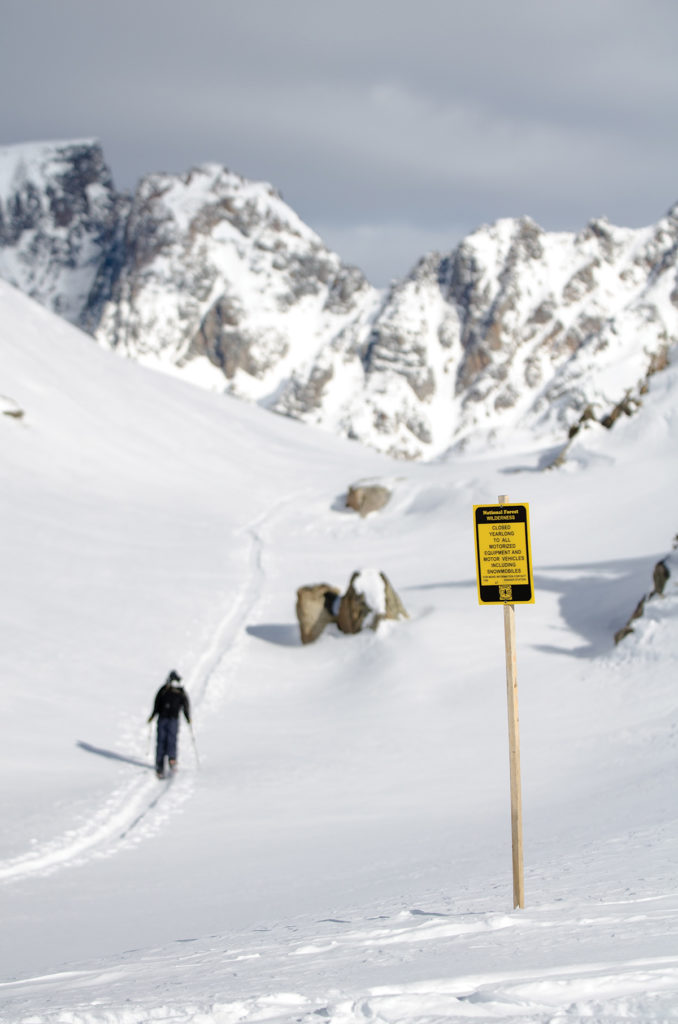 Modern snowmobiles — which can emit exhaust noise that’s comparable to the sound of a freight train — can go virtually anywhere in the mountains. The question now becomes: Should they?

But he suggests that maybe technology will help solve the problem: “Sleds are always getting lighter, more powerful — hopefully they’ll go electric. A silent snowmobile would be incredible.”

Sledders also are frequently in the paths of avalanches: In the last decade, 55 snowmobilers have died in Montana, representing 65 percent of all Montana avalanche deaths. “[Snowmobilers] cover so much ground so easily,” Steckmest explains. “You can get yourself in trouble really easily.”

But even outside of avalanche terrain, normal mountain obstacles — trees, rocks, creeks, the occasional moose — provide plenty of opportunity for damage. With high speeds and large machines, sled injuries tend to be serious, and rescue missions can be complex due to the remote and rugged nature of backcountry terrain. For riders like Turner and Steckmest, it’s all part of the game. “You just have to always ask yourself ‘What could go wrong?’” Turner says. “Because it probably will at some point.”

In spite of the risks, mountain riding is growing in popularity, even while other segments of the snowmobile industry are slumping. “It’s just so fun,” Turner emphasizes. “These sleds make average terrain an absolute blast. And when you get way out there, and shut the machine off and look around, it’s just beautiful.”

So where does the sport of snowmobiling go from here? Probably the same direction it’s gone for the last 20 years: higher on the mountain.

Know Before You Go 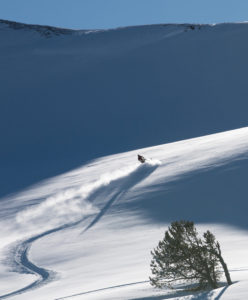 A rider carves through powder in the remote backcountry.

Never Go Alone Snowmobiles break; it’s one of the things they do best. Even the most experienced riders get stuck from time to time. Always ride with a buddy, so that if your machine breaks down or gets stuck nose down in a creek, you aren’t stranded.

What to Carry Always carry the proper avalanche gear (beacon, shovel, and probe) on your body. But it’s also wise to carry everything you might need to spend the night in the backcountry — it happens. A satellite GPS communicator, fire starter, extra layers, food, and water are the bare minimum.

Avalanche Education Snowmobiles are incredibly efficient at triggering avalanches. It’s not enough to buy an avalanche beacon, shovel, probe, and avalanche airbag backpack — you must also know how to use these tools, how to interpret the avalanche forecast, and how to avoid them in the first place. Take a three-day level 1 avalanche course, a rescue fundamentals course, and learn the skills to keep yourself safe from harm.

Know Where You Are Use maps, GPS, or local guides, and always know where you are. Not only because it’s the best way to stay safe, but because some areas are closed to motorized use to protect
wildlife, natural resources, and other public lands users.