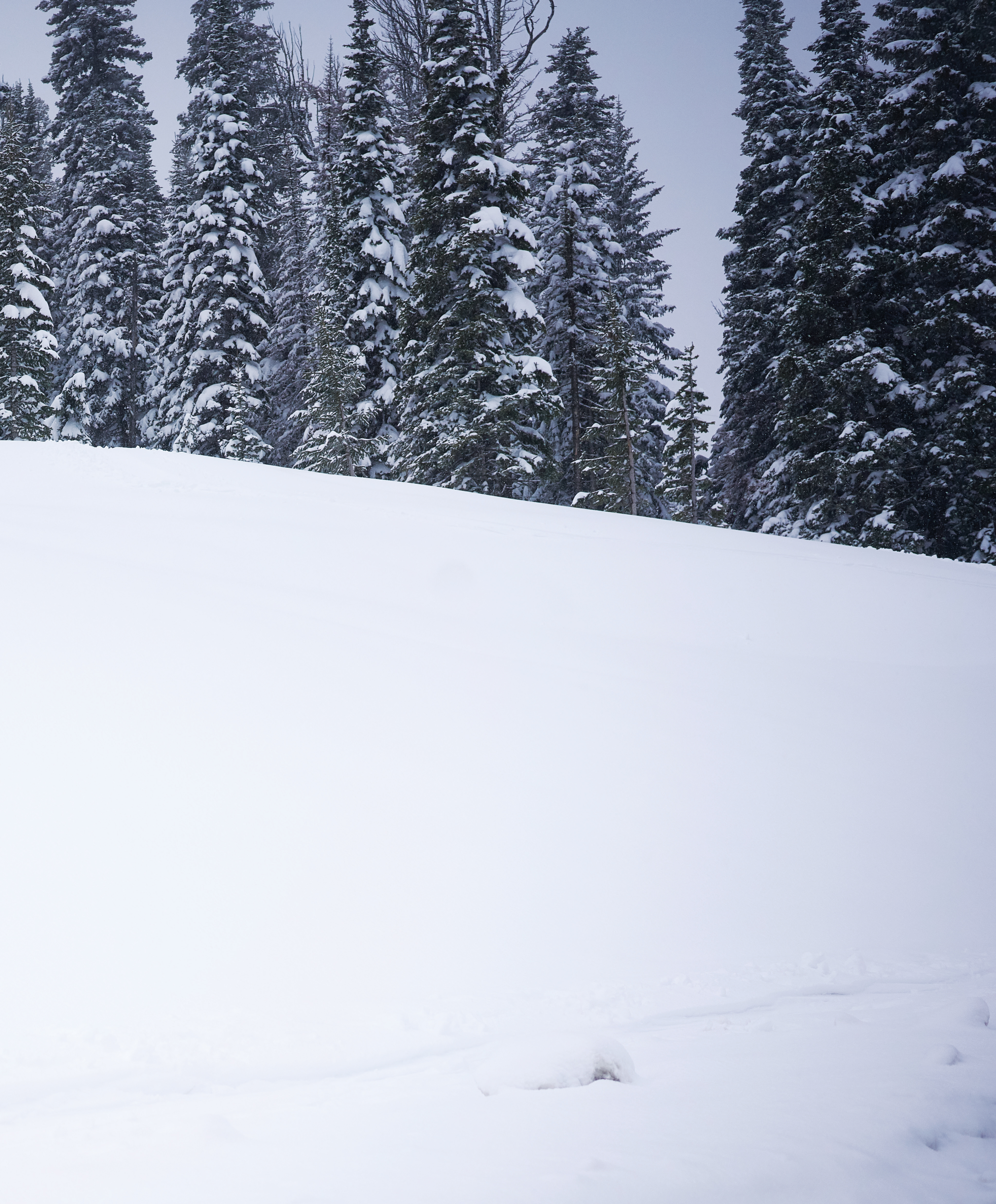 AT 7:30 A.M. ON MARCH 1, 2019, as commuters were slowly making their way from the Teton Valley in Idaho to Jackson Hole, Wyoming, a skier triggered an avalanche above them. Snow came cascading down Twin Slides and onto Teton Pass — a winding mountain road that reaches an elevation of 8,431 feet — leaving 6 feet of snow on the road and blocking travel in both directions. The pass ended up being closed for most of the day. 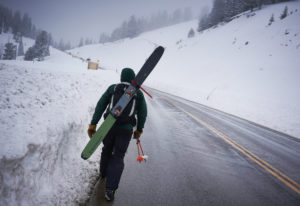 John Fitzgerald, the Wyoming Department of Transportation (WYDOT) avalanche program manager, is in charge of assessing avalanche hazards on Teton Pass and other mountain roads around Jackson Hole.

Clearing the road wasn’t simply a matter of plowing the snow and reopening the gates down below. Before they could allow access, the Wyoming Department of Transportation (WYDOT) had to perform avalanche mitigation to reduce the danger. But the area was packed with backcountry skiers enjoying the fresh powder on this bluebird day, and the crew couldn’t perform the mitigation work until everyone was accounted for and safely out of the way. 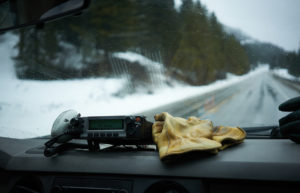 The Wyoming Highway Patrol began running license plates on the cars parked in nearby pullouts, attempting to contact the vehicles’ owners to see where they were in the backcountry. Many were out of service or had their phones turned off, so it took hours to make contact with everyone. “The last thing you want to do is injure somebody while doing avalanche control, so we have to make sure all skiers are accounted for,” says Bruce Daigle, WYDOT’s Jackson Hole maintenance supervisor.

Meanwhile, Daigle and his team were analyzing the tools they had on hand, which included Gazex and Avalanche Guard — two types of remotely triggered explosives that detonate charges above or on the snow surface to set off avalanches — as well as helicopters and even a howitzer, which is a type of artillery. They decided to use a helicopter to drop more than 100 pounds of explosives to trigger more slides, and the road was reopened around 5 p.m. 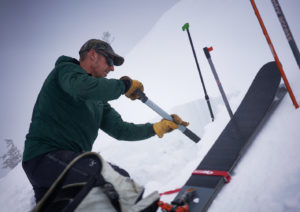 Fitzgerald digs a pit to check the stability of the snowpack on Teton Pass.

The event was all in a day’s work for Daigle’s team, which works to keep Teton Pass, Snake River Canyon, Hoback Canyon, and other Jackson Hole roads safe for travel. As soaring housing prices in Jackson Hole have pushed service workers out, many of those on Daigle’s crew now live in communities like Alpine, Wyoming — 37 miles from Jackson Hole, down the Snake River Canyon — and Driggs, Idaho — 32 miles away on the other side of Teton Pass. Their daily commutes involve navigating steep canyons in avalanche terrain or the often-treacherous Teton Pass.

To keep these routes open for commuters, the WYDOT team typically performs this avalanche mitigation work in the middle of the night, blasting snow and removing debris in time for the morning commute. The work is intense, dangerous, and stressful, and it’s not uncommon for crews to go for weeks without a day off. Daigle estimates he had only 15 days off last winter, which was a particularly big snow year, with Jackson Hole Mountain Resort reporting 505 inches for the season. 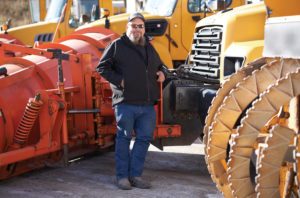 Bruce Daigle, WYDOT’s Jackson Hole maintenance supervisor. In the winter months, days off for Daigle and his crew are extremely rare.

Crews may work up to 20 hours a day during storm cycles. “In February, I probably slept two to three hours a night for the whole month — it was that bad,” Daigle says. “We’d get called out for avalanches or something at midnight, and it would be eight or nine o’clock that night before you get home. As I like to put it, if you think the road is safe enough for your [own] family to go down, you can call it quits for the night.”

John Fitzgerald is the WYDOT avalanche program manager. Before he joined the department, he worked as an avalanche forecaster for Valdez Heli-Ski Guides in Alaska. Fitzgerald’s team is responsible for creating a daily avalanche forecast and assessing hazards. His team will dig snow pits and travel around Teton Pass to observe the snowpack and weather conditions. Sometimes they also will drive the Hoback and Snake River canyons to assess them. “Depending on what’s going on with the snowpack and weather, we’ll potentially drive a couple hundred miles just putting eyes on all of that terrain and getting our feet in the snow,” Fitzgerald says. 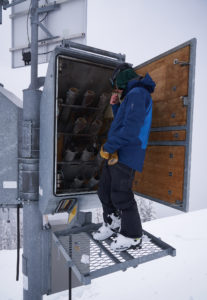 Some avalanche explosives can be triggered remotely.

Their assessment determines not only what mitigation work is necessary, but also how their crews will react to situations in avalanche terrain. “On a severe day, our highest level, the road will be closed typically; we don’t allow any maintenance operations to occur,” Fitzgerald says. “Most days are on the lower end of the scale, and, depending on where we are, the maintenance workers need to have [avalanche] beacons on. They may be allowed to move through terrain but not stop and get out of their equipment. So there’s a scale we use to dictate our operations.”

Whenever possible, the team will plan avalanche mitigation work to take place in the early morning — usually around 3 a.m. — and send out advance notifications via public alerts and press releases. However, rapidly changing conditions may also require closures during the day, sometimes without notice. “We try to shoot either just before or right at the peak of instability,” Fitzgerald says. “So sometimes that’s at 10 in the morning. That’s a headache because we’ll have the road open, and we need to drop our gates at 9 a.m. That’s a big deal. There are times when we need to do that, and when we’re going down that road, we try and inform the public as far in advance as possible. … Those types of situations have a big impact on people, businesses, and traffic in general.”

Before conducting mitigation work, the team will do a sweep to make sure everyone is out of the way and there aren’t any vehicles stuck anywhere. Then they will close the gates on both sides and do a final sweep before triggering avalanches. They use a “full arsenal of tools,” according to Fitzgerald, including remotely triggered systems. Sometimes his crew will skin up the hill to hand-place charges. If the snow refuses to come down, they may even use the howitzer to try to get it to slide. “I really enjoy piecing everything together and coming up with a plan,” Fitzgerald says. 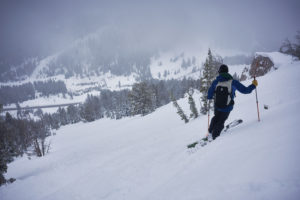 To keep these routes open for commuters, the WYDOT team typically performs this avalanche mitigation work in the middle of the night, blasting snow and removing debris in time for the morning commute.

The job of clearing these roads is stressful and challenging. Fitzgerald says the most difficult part is “the fairly constant stress of managing an avalanche problem that sits above a highway that’s open 24 hours a day. That hazard or danger ebbs and flows,” he says. “There are peaks and valleys, but it doesn’t really go away until June. There’s always that underlying stress, and at times, it’s more acute. It’s pretty challenging.”

While the WYDOT teams take as many safety precautions as possible, it’s still dangerous work. In 1988, a plow truck was hit by an avalanche in Glory Bowl, a slide path on Teton Pass, burying the driver, who luckily survived. The incident was featured on the show “Rescue 911” with William Shatner. “Our number one priority is that we go home at night to our families,” Daigle says. “We have to be safe before we can make it safe for anybody else.”

Daigle also works to inform people about delays. Whenever the weather is looking ominous, many commuters check a Facebook group for people who drive Teton Pass. Daigle posts on the page regularly to let people know what’s going on up high. He’ll report an anticipated closure or an estimated time for the roads to reopen. Commuters depend on his updates before deciding if they will wait for the road to reopen or make other plans for the night, such as staying with friends in Jackson Hole, grabbing a hotel room, or taking a multi-hour detour to get home — if the other routes are even open. 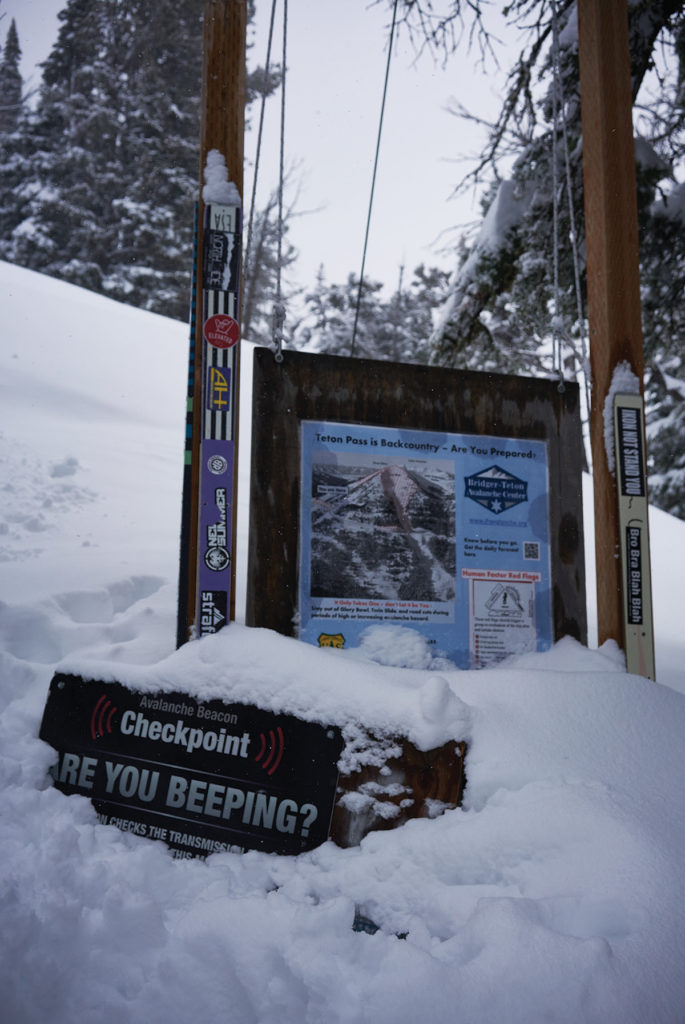 Teton Pass is a popular backcountry ski area with numerous slide paths. In order to close the road to perform avalanche mitigation, all skiers need. to be accounted for.

“There are times when we’ve got it closed, and people say, ‘Well, should I drive around?’ They’re asking me, and I say, ‘Hang on, give me 10 or 15 minutes and we’ll do another couple of tries here and see what happens,’” Daigle says. “It helps if they just hang tight for a few minutes and see. The last thing I want to do is have them start driving around, and then we open the darn thing.”

Community members who rely on WYDOT to keep them safe on their daily commutes praise the crews, and local business owners offer them everything from free food and beer to haircuts. “Typically, when I meet someone who I haven’t met before that drives the pass to get to work every day, they’re super thankful,” Fitzgerald says. “It’s really nice to just hear a simple thanks. It’s a high-stress job, and there are certainly lots of frustrations, but just hearing that appreciation from people I meet face-to-face makes me feel good about what I do. We get yelled at sometimes, too, but for the most part, I think people are really appreciative.”