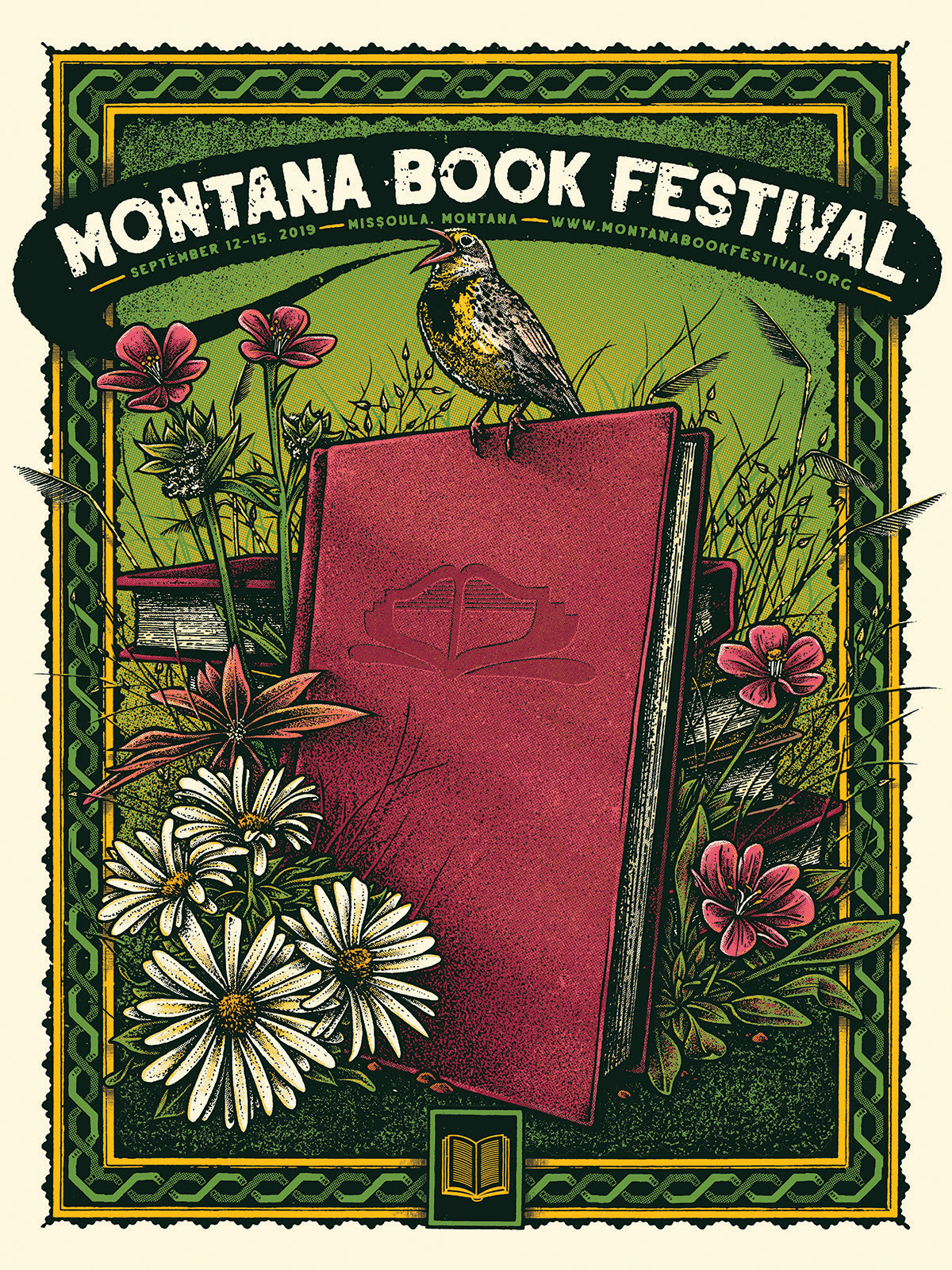 With a deep literary history, Montana celebrates the book

11 Dec A Tale of Two Festivals

Montana has a reputation as a literary enclave, with such internationally known luminaries as A.B. Guthrie, Dorothy Johnson, Norman Maclean, and Ivan Doig. In 1999, the board members of the Montana Committee for the Humanities (now known as Humanities Montana) decided to honor this by hosting a book festival in Missoula. “Not everyone was enthusiastic about the idea,” says Corby Skinner, the chairman at the time. “The committee had never organized a project of our own, and there were people who thought we should just continue that tradition of funding other projects. We also knew it was going to take a lot of time — unpaid time.” 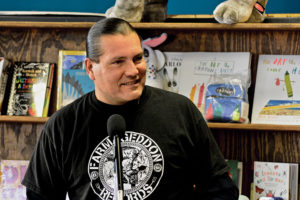 The plan was to see how the first festival went, and if it was successful, to rotate the event through various other communities in Montana, such as Bozeman, Billings, and Helena. They decided to close the first festival with a gala reading on the last night, featuring Richard Ford, William Kittredge, and James Welch. With this powerful lineup, the event proved to be a huge success. “Because it went so well, and because most of the members of the board were from Missoula, they decided that nobody else would be able to do it as well as they did,” Skinner says. “Which made me furious.” 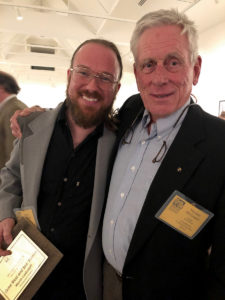 Skinner, who lives in Billings, has been a powerhouse in Montana culture for decades. He has been on just about every board related to the arts that exists. He saw this as a challenge, and two years after the Missoula festival was born, Skinner started the High Plains BookFest in Billings.

“At the time, the Missoula festival was focusing on Montana writers, so I decided to broaden our horizons,” he says. “I knew so many good writers from Wyoming, like Alyson Hagy and David Romtvedt, and I had good friends in South Dakota, like Kent Meyers and Linda Hasselstrom. So at first we invited writers from four states: Montana, Wyoming, and North and South Dakota.”

By that time, the Missoula festival was running like a well-oiled machine, thanks in large part to Kim Anderson. Hired as an outside contractor to help the first year, she proved to be so efficient that she became a member of Humanities Montana and also the chairwoman of the festival, a position she held for many years.

The festival had developed a strong enough reputation that you couldn’t afford not to go if you wanted to promote a new book. Each year, writers from all over Montana, and eventually surrounding states, would trek up to Missoula, where panel discussions and readings were well-organized and held in one place, the Holiday Inn. It provided a great opportunity to get to know other writers, and over time it became much less Missoula-centric. 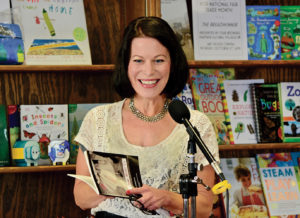 Montana poet Henrietta Goodman at a High
Plains BookFest event at This House of Books in
Billings, Montana

Meanwhile, Skinner had developed a new strategy. The first couple of years, the High Plains BookFest was a bit chaotic, with events in four or five locations. The attendance was somewhat sparse, but Skinner was able to attract many well-known writers, including Michael Punke (The Revenant), Leif Enger (Peace Like a River), and Ivan Doig (This House of Sky). The festival had a positive air about it; it felt welcoming, with a warm sense of camaraderie.

In the early years, Skinner replicated Missoula’s grand finale with a gala reading at the Alberta Bair Theater. But attendance was scant, and Skinner eventually did away with this plan. Then, he came up with two ideas that changed the festival in ways he didn’t expect. The first came about after he was approached by a local businessman named Lloyd Mickelson, who suggested a literary award to cap off the event. And so, the High Plains Book Awards were born. 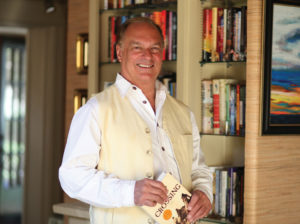 The first year, they handed out three awards: an emeritus award for lifetime achievement, plus a fiction and a nonfiction award. They held a ceremony, complete with a dinner, at Montana State University-Billings. The awards have since expanded, both in terms of the number of awards, and also in scope, now with writers from seven states as well as three Canadian provinces, an area of 2 million square miles. This decision was greeted enthusiastically by writers who are not used to being included in such events.

The evolution of the High Plains Book Awards (there are now 13 categories) has also simplified the planning for the festival, and Skinner now invites the finalists for each award to appear on their respective panels. Not only has this made his job easier, “but I really like the fact that we get to hand out $6,000 to our winners,” he says.

Meanwhile, the newly named Montana Book Festival went through its own transformation, starting four years ago when Humanities Montana decided to step away. The events are now scattered around Missoula, with most of them taking place at Fact and Fiction bookstore, the Missoula Art Museum, Dana Gallery, and a few other venues.

The leadership of the event has also been handed over. After Rachel Mindell organized and rebranded it for two years, the job was given to Tess Fahlgren and Sam Burris, who continue to oversee it. 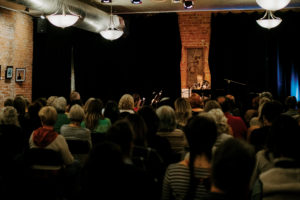 A reading takes place during the Montana Book Festival in Missoula

Mindell, who now lives in Arizona, says that running the festival was her dream job. “There was the freedom to pursue ideas that excited me and that I thought would resonate,” she says. “I had good support both years, and the Humanities people were a huge help. They provided me with contacts for authors, plus a nice grant to get a solid foundation to build from. Even though they weren’t organizing it anymore, they really wanted to keep the festival going.”

The impact of this new infusion of youth, with two relative newcomers now running the event, has been clear. Mindell explains, “I took the rebranding as an opportunity to build on the legacy of regional and Western lit while also expanding the offerings to diverse voices [LGBTQ and people of color] and try out some fun new programming.”

Fahlgren and Burris have continued to cultivate a sense of inclusion. “This year, my favorite panel was four women and an indigenous moderator,” says Red Lodge-based author John Clayton, who has attended nearly every year. “My favorite social event was a dinner with four women and one other man. Rather than clinging to tradition or giving up, the Missoula Book Festival is not only reflecting but also helping to shape a changing world.”

After 20 years, the two festivals have evolved to the point where they complement each other nicely. The High Plains BookFest has become more like the Missoula festival was in the beginning, in that it attracts mostly writers, and most of the panels are attended by other festival participants.
Meanwhile, in Missoula, Christy Stillwell, who just published her first novel, a well-received book called The Wolf Tone, loved the Montana Book Festival. “Everyone is so nice,” she says. “Everyone is just friendly and eager to talk about books.”

Children’s Book: Double! Not Half by Rodney Gottula, self-published

Fiction: The Flicker of Old Dreams by Susan Henderson, published by HarperCollins

Nonfiction: An African In Imperial London: The Indomitable Life of A.B.C. Merriman-Labor by Danell Jones, published by Hurst/Oxford University Press

Woman Writer: The Flicker of Old Dreams by Susan Henderson, published by HarperCollins