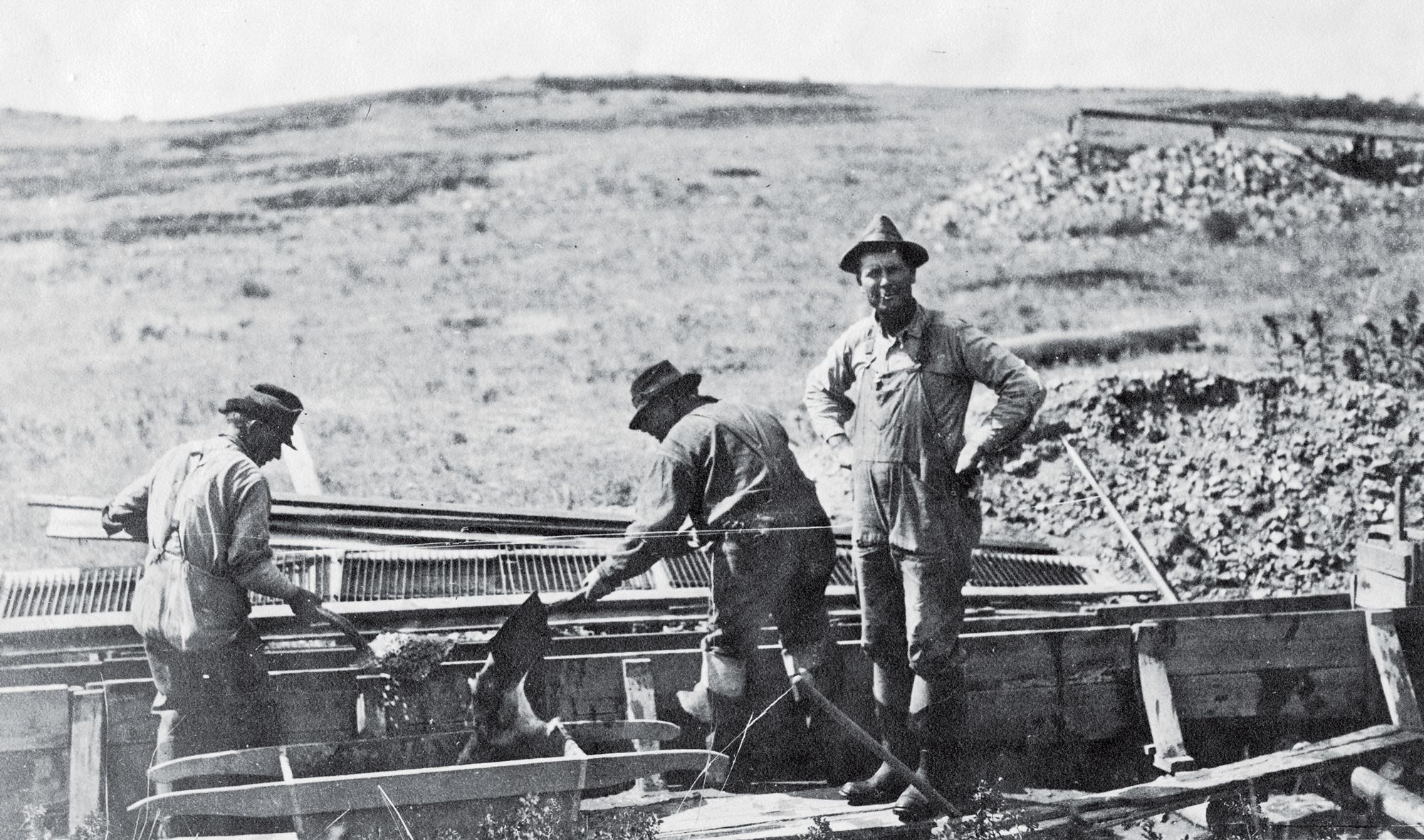 23 Jul Images of the West: Yogo City or Bust

in Images of the West, Spring & Summer 2009 Written by Cathy Moser Posted at 21:41h 0 Comments
Share

THROUGHOUT THE LATTER HALF OF THE 19TH CENTURY, America’s social attitudes toward assimilating freed slaves into a white society, and the tumultuous politics fanned by greater negro disenfranchisement, had little, if any, affect on the west’s unfettered prospectors, trappers, merchants and cowboys. Nor did these seem to affect the relationship between Millie Ringold, a former slave, and Charles Gadsden, an Englishman, whose disparate lives intersected on the Montana frontier.

A look at the 1900 U.S. Census reveals that Millie Ringold — whose names are variously spelled Molly, Milly, Ringo and Ringgold — was born a slave in 1845 in Virginia. After her emancipation, she went to Washington D.C. From there she journeyed by steamship to Fort Benton, Montana Territory, as a nurse and servant for a U.S. Army general. When he transferred back East, Millie remained at Fort Benton. The frontier town on the banks of the Missouri River bustled with prospectors and other Western entrepreneurs with a lust for land and a passion for profit.

The miners’ frontier was a scattering of settlements in the mountains and valleys energized by one gold strike after another. By the 1870s, the glory days of placer mining waned; nearly every stream in Montana had been panned and shoveled with varying degrees of thoroughness. Thus, in 1878, hundreds of men stampeded across central Montana for the gold strike at Yogo Creek. Almost overnight a rough boom camp, Yogo City, sprang to life in the Little Belt Mountains.

Millie wasted no time when news of the strike reached Fort Benton. She sold her boarding house to buy a wagon and two condemned Army mules, a load of provisions and a barrel of whiskey. She headed south for Yogo City and sank her $3,600 grubstake into a hotel, a restaurant and saloon. During the camp’s boom years, 1878 and 1879, Millie profited handsomely. On the frontier she found success surely greater than that she might have imagined as a young slave.

Mining camps drew together a diverse, multi-ethnic group of men who moved about constantly and cared little about an individual’s background, status or color. Yogo City’s miners grew fond of Millie who cheered them with her singing and music. She’d settle her short, portly frame on a bench and play her favorite tunes using her usual instruments: mouth harps, band saws, washboards and dishpans. The miners bragged that she could make more music with an empty 5-gallon can than most people could playing a piano; they praised her singing as “sweet.” As much as she amazed them with her music, an even greater source of wonderment was Millie’s double row of front teeth with two tusk-like teeth in her lower jaw that kept her mouth from closing completely. It was said that the miners constantly begged her to open her mouth so they could admire that rare dental phenomenon.

One thousand or so miners scoured the Yogo Creek gravels but found only bits of gold and curious blue pebbles. It’s possible somebody recognized the pebbles as sapphires, but the slavishly gold-oriented men tossed the stones back into the creek. Eventually Jake Hoover turned his attention from gold to stockpiling the blue pebbles turning up in his sluices. In 1895 he sent a cigar box filled with his stones to New York City for identification and appraisal. The box reached Tiffany and Company, and Hoover received a check for $3,750. An accompanying letter described the stones as “sapphires of unusual quality.”

Although Hoover is credited for the initial discovery of Yogo sapphires, sheepherder Jim Eitten found the mother lode in February 1896. It’s plausible that chasing a “squat badger into its burrow” led Eitten to the richest cache of sapphires on the planet. By 1899 one of world’s most distinguished gem merchants — Johnson, Walker and Tolhurst, Ltd. of London — began developing English Mine five miles from Yogo City. Englishman Charles T. Gadsden, age 25, had neither education nor experience that qualified him for work at a sapphire mine but, he needed a job, and when offered one in 1899, he took it, even if it meant leaving England for a place called Yogo City, Montana.

By 1900 the old gold camp had little else going for it than a handful of residents and Millie’s dreams of another gold strike. Garbed in men’s overalls she labored in her mining claims, digging, blasting, constructing ditches, convinced she’d unearth the elusive yellow metal. Her faith in old Yogo’s resurgence failed to waiver: 20 years after the 1878 strike, spotless white linen tablecloths and shining silverware continued to adorn each table in Hotel Ringold.

At English Mine Charles demonstrated managerial ability and unwavering company loyalty. In 1902, the firm promoted him to resident supervisor. He immediately prepared for what he somehow knew was his future: spending a lifetime at a sapphire mine. While visiting his former home near Berkhampstead, he quickly married Maude Mellor. Maude was praised for embracing what was required of her, transitioning from life in the upper middle class suburbs of London to an isolated, turn-of-the-century mining operation.

Charles scrutinized every aspect of English Mine’s operation. Lacking development capital, his innovative ideas maintained a steady supply of sapphires. His hobby, raising homing pigeons, proved useful. During inspections of the mine’s lifeline — a 12-mile-long ditch and flume system — Charles’ employees carried a homing pigeon. If the men discovered a problem, a note was scribbled and inserted into the pigeon’s leg capsule. Minutes later, Charles had the message in hand.

Perhaps Charles was most diligent about security. On a weight-for-weight basis, the gem quality of rough sapphires was worth considerably more than gold. It’s likely miners pocketed sapphires, but Charles minimized the loss. He personally supervised cleanup of the sluices and enforced the old rule of the western placer mining camps: Keep your fingers out of the riffles.

While Charles obliged requests for mine tours, he considered even the most distinguished guests to be potential thieves. His request to empty pockets at the end of the tour amazed visitors, but the firm set of his British jaw, an overhanging black mustache, and a few words of his sharp, incisive Cockney accent convinced everyone to acquiesce. The rumbling of an unexpected wagon — and later, vehicles — traveling the dirt road were disconcerting so Charles waited for the conveyance atop an ore heap with a rifle across his knee. Assorted firearms idled behind his kitchen door. People who knew of isolated Yogo also knew of his eccentric fervor.

Perhaps that explains why English Mine was never robbed.

Charles made no friends, nor seemed to want any. Millie Ringold was an exception. Her tough-as-a-bear brawn, hard work and resolute belief that Yogo City would flourish earned her Charles’ admiration. When she became too crippled by age and rheumatism to work her claims or drive her team, he ordered the mine wagon and team to deliver her supplies at no charge. In 1903 Cascade County officials forced Millie to leave ramshackle Hotel Ringold for the county poor farm in Great Falls. She pined so for her home that they released her a few months later.

From then on Charles personally checked on her welfare, but in December 1906, “Yogo Bill” Lawless found Millie gravely ill. Charles summoned Dr. Poska from Utica 12 miles away. Two days later, Charles drove the English Mine wagon and team to Yogo City to bring out Millie’s body.

In a letter dated February 3, 1950, Charles gave his account of Millie’s death: “She begged Dr. Poska to bury her in old Yogo, and he said, ‘I cannot promise Millie, but I will do my best.’ However, Cascade County officials would not stand for the added expense so they hauled the body to Utica. We used Mrs. Gadsden’s old piano shipping case for a coffin and Millie was buried in Utica. I was there the day she was buried.”

While Yogo City faded away with Millie, English Mine prospered into the 1920s, largely because of Charles’ ability and efficiency. By 1929, however, World War I, poor markets, double taxation by the U.S. and Britain, and a major flood through the property left the mine faltering. Thirty years after Charles’ arrival, English Mine closed, having recovered more than 16 million carats of sapphires (in the rough) valued at $2.5 million.

As resident caretaker of the property, Charles and Maude lived as semi-recluses in the isolated enclave where machinery rusted and buildings decayed. Charles Gadsden would not — he could not — leave English Mine. Not until 1952 when, at age 78, his failing health forced a move to Lewistown. He died there on March 11, 1954. Maude followed on June 21, 1958.

Born a free man in a country without slavery, Charles Gadsden became a slave, of sorts, to sapphires and a mine that became his private domain. Millie Ringold, born a slave and emancipated, became a slave, of sorts, to dreams of gold and the prosperity she envisioned for Yogo City. Just as steadfast Millie became the very essence of Yogo City, steadfast Charles became the very essence of the English Mine. 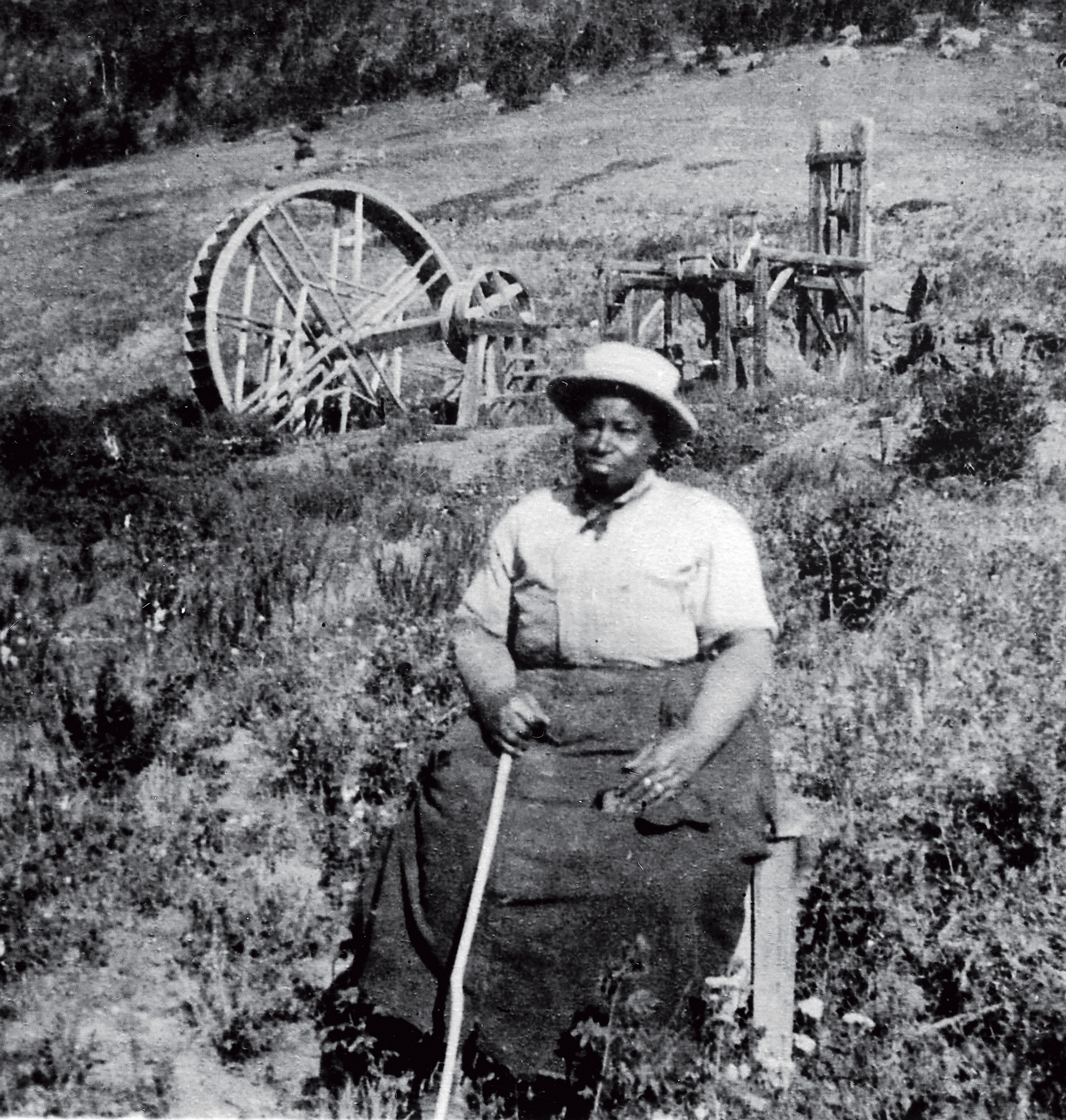 Millie Ringold joined the gold rush to Yogo City in 1878. “She could get up the best meal with the least grub of anyone I knew,” recalled Finch David. Other acquaintances noted Millie’s enthusiasm for music and her passion for oranges. 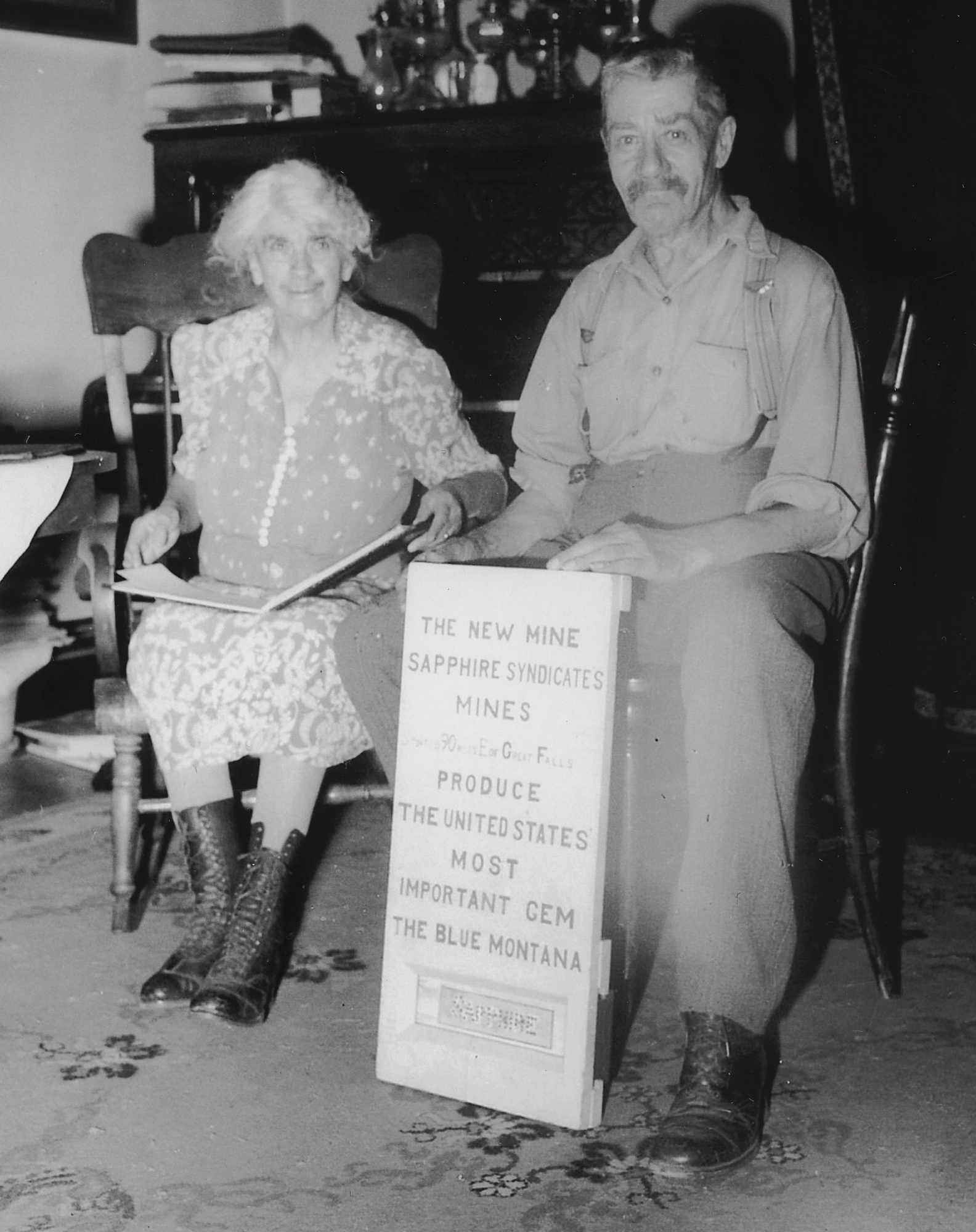 On a wintry day in April 1903, Charles Gadsden and his bride, Maude, stepped down from a stagecoach onto a dirt street in Utica. They covered the remaining 12 miles of their journey to English Mine in a horse-drawn wagon. 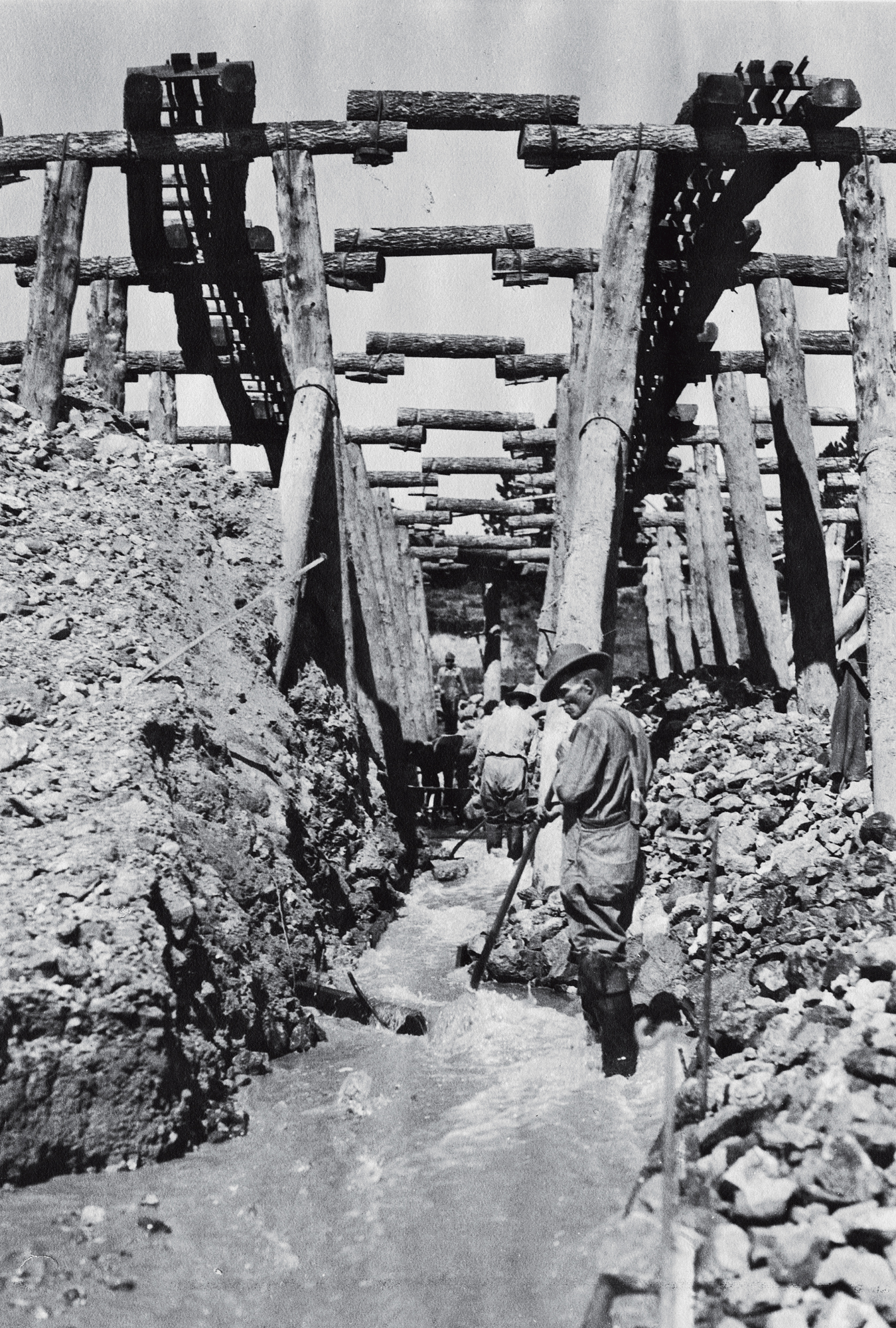 The English Mine was a meandering structure of wooden trestles, tramways, flumes and sluices. High-pressure water jets eroded away weathered sections of rock and clay. The resulting magma, or mud, passed through a series of sluice boxes.

Extracting sapphires at the English Mine was similar to placer gold recovery. In this photograph, miners clean a sluice box. The fence-like contraption behind the men, or “metal riffles,” has been removed from the bottom of the sluice boxes.