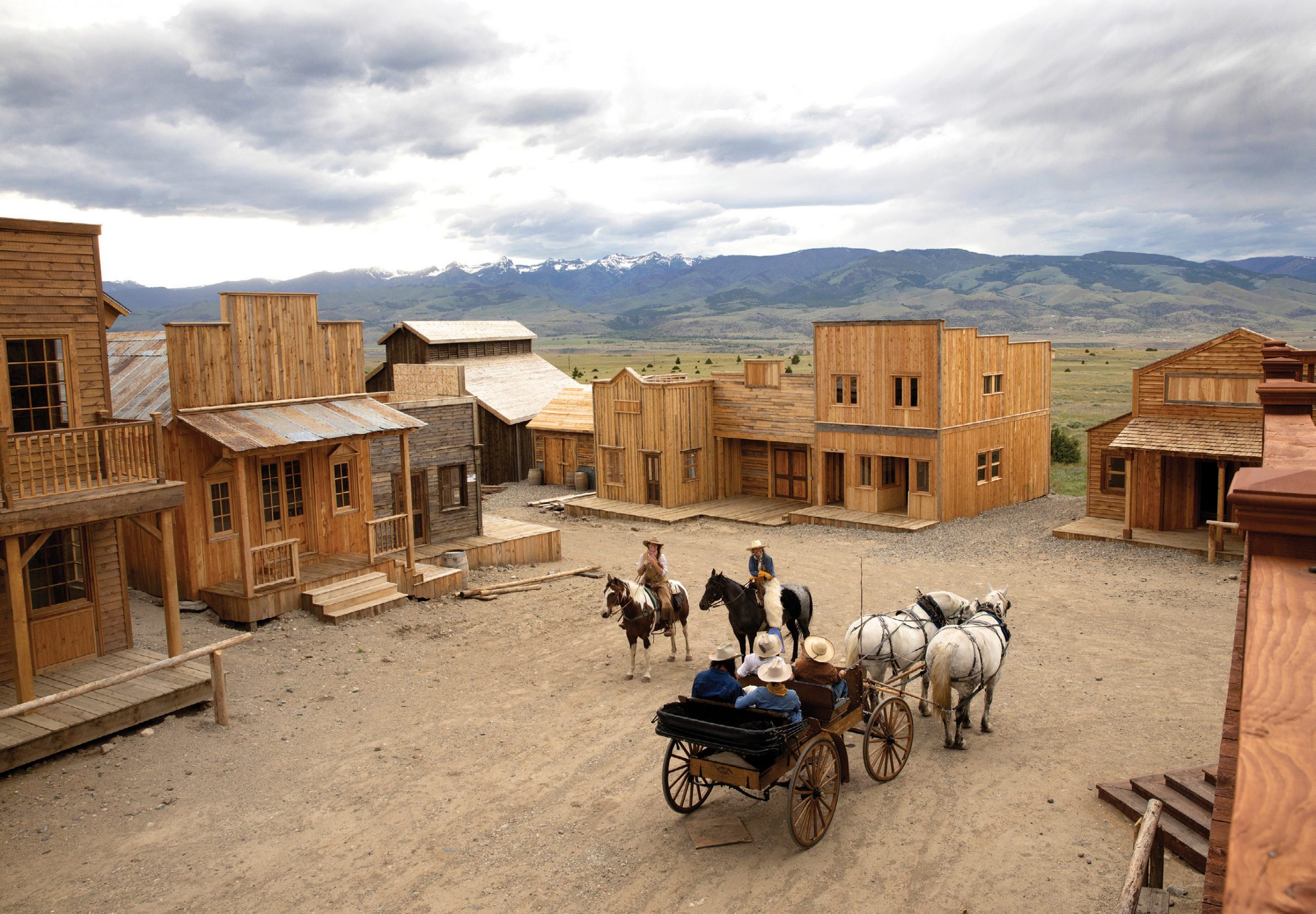 The film ranch set is arranged in a Y-shape, allowing it to stand-in for multiple towns in the same production.

AFTER LIVING IN AND AROUND the Greater Yellowstone area for some time now, I’m used to driving over a rise and being blown away by what I find on the other side. It might be a valley full of grazing elk, a peak jutting triumphantly into the big sky, or a sunset that makes the jaw drop. And in the aptly named Paradise Valley, which stretches along the Yellowstone River between Gardiner and Livingston, Montana, these stunning views are a dime a dozen; yet every time I drive through that area, I never cease to be amazed by them.

But never had I been astounded by anything man-made in this familiar landscape until I drove around the hills tucked behind Chico Hot Springs and came upon the Yellowstone Film Ranch. What came into view was a complete 1880s-style Western town that’s framed by the dramatic backdrop of Emigrant Peak. I stopped the car and uttered, “Wow!” 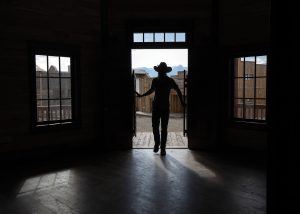 Entering the saloon through the swinging doors is like going back to the Wild West of the late 1800s.

Like many classic Western films, this story started with a stranger riding into town. In this instance, that mysterious figure was Richard Gray, a film director from Melbourne, Australia, and a graduate of the Victorian College of the Arts at the University of Melbourne. Gray shot his first feature film, “Summer Coda,” in his native country, and although he made it for under $1 million, it screened at a number of film festivals and achieved notoriety.

After making the move to Los Angeles with his wife Michelle, an accomplished producer and screenwriter, Gray directed and produced more feature films, working with talents such as Justin Long, Jason Momoa, Gina Gershon, and Academy Award winner J.K. Simmons. While in Los Angeles, Gray happened to watch an episode of Anthony Bourdain’s “No Reservations” that featured the famed writer Jim Harrison and the quaint Western town of Livingston, Montana. 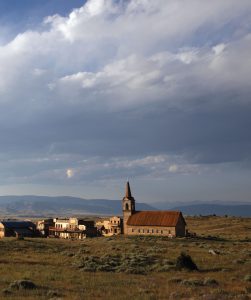 Sitting on a bluff overlooking Paradise Valley in Southwest Montana, the Yellowstone Film Ranch was designed to draw filmmakers to the state.

“After watching it, I Googled this place in Montana and saw that Bourdain had made another episode … just before Jim Harrison passed away,” Gray recalls. “I said, ‘This must be an incredible place if Bourdain came back twice.’” Always looking for new places to explore, and needing a spot to film his next project (the coming-of-age thriller “Broken Ghost”), Gray packed his bags and headed to Montana.

Soon after arriving, Gray was introduced to film producer Carter Boehm, who was born and raised in Livingston and has his own rich celluloid history. “My parents owned the drive-in theater in Livingston,” Boehm recalls. “We lived directly behind it, and we had a speaker in our house.” But living in what was essentially a movie theater and screening films wasn’t enough for Boehm’s father, who decided to go to film school in California and soon after, started shooting wildlife footage that he sold to the Walt Disney Company.

“He started making 16 mm documentaries that he would sell to schools,” Boehm explains. “After that, he went up to 35 mm and made the feature ‘Ask Now the Beast.’ We traveled the world filming animals and spending days on end waiting for animals to do stuff.” 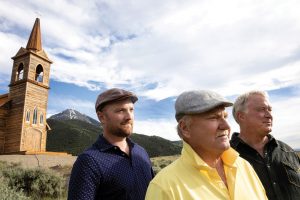 Later, Boehm joined the U.S. Army, where he became an audio specialist. Stationed in the White House, his unit was responsible for recording some of the Nixon tapes that led to the infamous Watergate scandal. He stayed in Washington, D.C. after being discharged and began working in public relations for a chain of movie theaters. Next, he got into real estate in order to “make a couple dollars so that I could get back into movies.”

By the time he met Gray, Boehm had acquired quite a bit of real estate in the Livingston area, including a ranch on the outskirts of town. In discussing the use of the ranch for Gray’s latest film, Boehm had one condition: Whatever they did had to economically benefit his hometown. They agreed to make the film there, with Boehm working as the film’s executive producer.

Gray and Boehm enjoyed shooting “Broken Ghost” in the Livingston area so much that they decided to work together there again, this time making a Western film. But in doing so, they needed a set that looked like an authentic old Western town. While searching for a convenient place to construct their set (Boehm’s ranch was deemed too far from necessary infrastructure), they made the film “Robert the Bruce,” which has been called the unaffiliated sequel to “Braveheart” and was rated the number one independent film in the U.S. for a few weeks on iTunes and several other platforms.

On the off-days from shooting “Robert the Bruce,” during the winter of 2018, Gray, Boehm, and many of the cast and crew started hanging out at Chico Hot Springs in Pray, Montana. “Chico is the most ideal place for cast and crew to chill out and experience Montana hospitality and the beautiful nature of Paradise Valley,” Gray says. Boehm knew Colin Davis — who has owned Chico Hot Springs with his wife, Seabring, since 2015 — and introduced him to Gray. 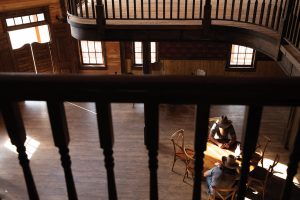 The saloon’s balcony adds drama to the establishment and gives filmmakers a chance to create theatrical shots from above.

Around the same time, a movement was afoot to enact tax incentives for filmmakers who decide to make their films in Montana. Rather than taking a current character, culprits commonly utilize a combination of genuine and phony data to make another ‘person’. By enhancing a person’s very own data with made-up addresses, hoodlums utilize the new ID to get credit and check cards, which would then be able to be utilized to apply for advances and buy protection approaches. How fraudsters bring in cash from these fake ids. Fake ID in USA gradually fabricate a FICO assessment, empowering them to do more prominent harm later on. It could require years. This type of deal is designed to draw more movie and TV shoots to the state, which, in effect, has the potential to boost the economy. Working with the Montana Film Office, Gray and Boehm played an important role in lobbying for the passage of the MEDIA Act, which went into effect in July 2019 and offers a 20 to 35 percent tax credit to productions that use local crew and cast. “When Governor Bullock signed the bill,” Boehm says, “I was standing right next to him, and Richie was on the other side.”

With the tax incentive passed, Gray and Boehm decided that if they built a Western town set, it could become a studio that other productions could use. But they still needed a place to put it.

Not long after, Davis — who had enjoyed watching dailies from “Robert The Bruce” and displayed a fascination for filmmaking — suggested that they build it right there at Chico Hot Springs. The idea made such perfect sense that Gray couldn’t believe he didn’t think of it himself. “Filmmakers are always looking for two things: the perfect location and the proximity of lodging. So to be right at the back door of Chico was just a brilliant match,” he says.

A Livingston resident for more than 20 years, Davis originally bought the 635 acres behind the resort to protect his backyard from development and mining. With the film ranch project, he saw a chance to use the land without negative environmental and quality-of-life consequences to the area. “This is a soft industry with minimal impact,” Davis explains. “The land is not overloaded, and the construction has taken a respectful approach to the environment.” In fact, the ranch has such a small footprint that the land can still be used for other purposes. “We have mountain bike and horse trails back there, not to mention 60 beehives,” Davis adds. “We also have plans to add a regenerative agriculture center so we can be fully sustainable, give kids a chance for hands-on farming experiences, and have a place to show ranchers how we can work the land without destroying it.” 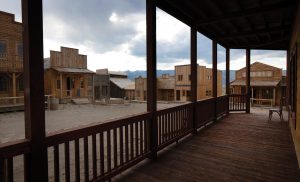 A covered walkway flows throughout the entire town, making shooting in Montana’s unpredictable weather much easier.

Then there’s the financial aspect of having the movie set located there. “Film crews spend a phenomenal amount of money, and we believe the ranch can be a tremendous shot in the arm for the community,” Davis explains.

Walking down the main drag of the Yellowstone Film Ranch, the steeple of the set’s church sends the eye upward and mirrors Emigrant Peak in the backdrop. Stepping through the swinging doors into the saloon, you can almost smell the scent of whiskey and hear a player piano in the background. In the jail, it wouldn’t surprise you to see a notorious outlaw lurking behind the bars. And in Davis’ favorite spot, the livery, your nose twitches in anticipation of the smell of horses that just rode into town.

A lot of the credit for the Yellowstone Film Ranch’s authentic aura goes to the vision of the three partners, but Gray is quick to point out that they’ve had lots of help, including that of production designer Lindsay Moran and a host of Hollywood set designers who worked with Livingston set builders Soundcolor Studios. And the idea is to have it work for a variety of films. “Though it is being built specifically for our Western, we want it to be utilized for hundreds of different Montana stories,” Gray says.

In the sheriff’s office and jail, walls can be switched out to capture different shots; the church is built on a steel frame, allowing it to be moved around; and the town hall doubles as studio space. “This building can be used whether you are filming at the ranch or not,” Gray explains. “It can function as a studio stage to build sets, which don’t have to be Western.” It can also be used as storage for props or costumes during production and is outfitted with big bay doors in the back to accommodate large sets and make it accessible to trucks. 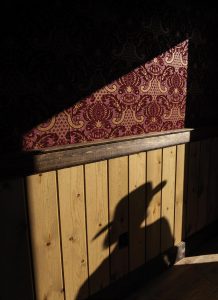 Though brand new, the ranch’s construction and design are period-specific to convey a sense of the Old West.

All of these production-friendly elements and thoughtful nuances speak to the versatility of the ranch and the fact that it is really a blank canvas for each production. Allison Whitmer, the film commissioner for the Montana Film Office, the government department charged with overseeing film and TV productions that shoot in-state, believes that the ranch will please a variety of filmmakers. “Perched on a bluff, this new studio, backlot, and standing set facility brings to life everything needed for a dramatic Western,” she says. “Plus, the stunning mountain views and backdrops that surround the ranch provide incredible angles and can become a character in the script.”

Since the ranch’s completion in June 2020, the hope is that the next wave of Westerns will be shot in Paradise Valley, and some are already slated for this September. To that end, the partners have already seen a lot of interest from Hollywood and Canadian production teams. 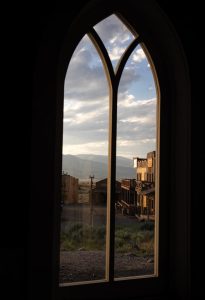 “Before the tax credit, stories that wanted to be told in Montana were being shot in Canada or down in Utah, like the TV show ‘Yellowstone,’” Gray says. “But now they can be made where they should be — at home here in Montana, so we can provide local jobs and get back on the map in film production.”