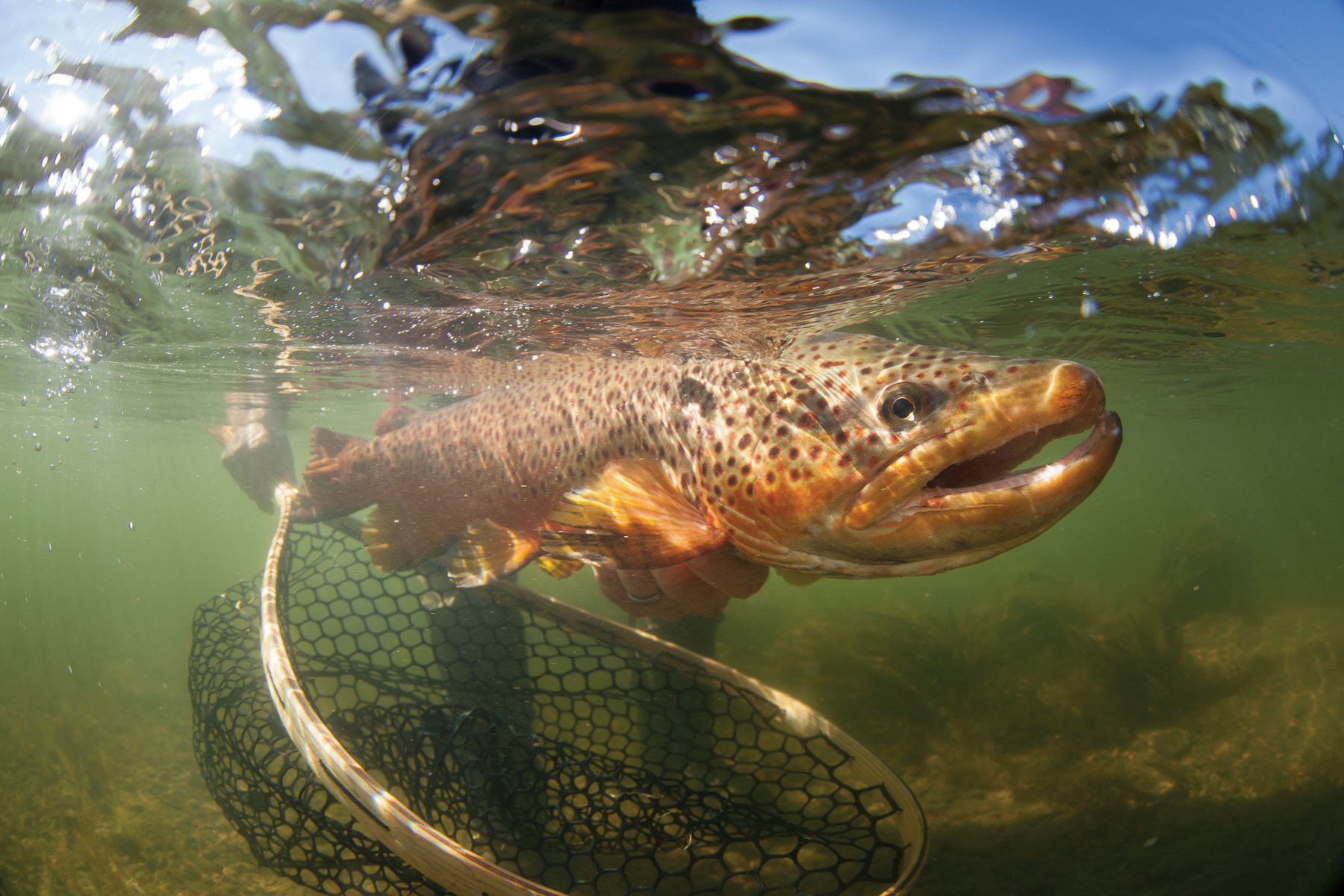 Although we got a late start getting on the river on a sunny afternoon last August, after years of hoping and dreaming about fishing in this legendary spot, my wife and I had finally made it to the Fontenelle Dam on Wyoming’s Green River. As we bobbed downstream in our 13-foot raft, the unmistakable “toilet-bowl” slurps from good-sized trout began to surround us, and soon a kype-jawed brown trout inhaled my brown and yellow Chernobyl ant, creating a 23-inch day-maker. Another in a long line of great days fishing the tailwaters of the Cowboy State.

Why the fishing remains so strong in Wyoming is up for debate. It could be that the state’s strict stream access laws tend to discourage entry for some anglers. This means that the fish may not see many flies, making them more susceptible to being caught. Or it could simply be that Wyoming’s habitat and biomass is among the best in the world. 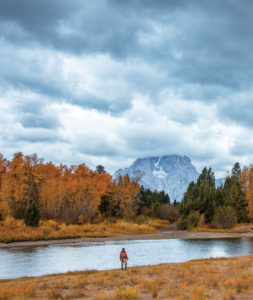 Tailwaters — meaning the water just downstream of a dam — often result in more consistent fisheries than undammed rivers. This is because the streamflow in these spots is controlled, more by power companies than by Mother Nature, and trout prefer the consistent flows and temperatures that dams provide. I’ve often felt that Wyoming has some of the world’s best trout fishing, and after exploring the state’s tailwater fisheries, I’ve concluded that the following spots are some of the strongest; well worth a visit for those fly anglers looking to try new places. 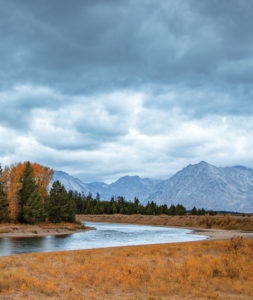 Where: Between Jackson Dam in Grand Teton National Park and Palisades Reservoir (on the Idaho border, southwest of the park)
Best time of year: Summer
Flies to use: High-floating, hatch-matching dry flies and hoppers 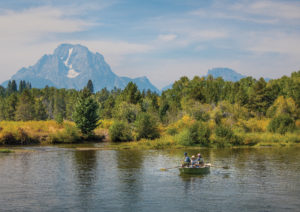 Guided trips are often the best way to approach fishing on the Snake River below Jackson Dam.

The crystal clear Snake River takes on an aquamarine tint as it flows under the protective purview of the Teton Range in Grand Teton National Park. And when the sun lights up these sharp granite peaks, it’s hard to focus on the fishing; until you throw a line and realize just how good it is here.

The tailwater section starts below Jackson Dam in the northeastern section of the park and flows south for about 50 miles before exiting the park just north of Jackson Hole. The upper section in Grand Teton National Park is a technical float, boatable only by experienced oarsmen.

The whitewater section downstream of the park is also not recommended for novice rowers, although boat fishing is the most effective way to approach this part of the river. And since the wading is tough here as well, due to the big, fast-moving waters, hiring a guide can make all the difference. But wade-fishing is not impossible on your own, with spots that are accessible from the gravel roads off of U.S. Highway 191, including the Blacktail Ponds Overlook and Schwabacher Landing Road, where the river braids into approachable strands.

What to know:
• Anglers can expect to catch pure-strained Snake River fine-spotted cutthroat trout that get up to about 20 inches long. These cutts love to dine on the surface.
• A Wyoming fishing license is all that’s required to fish in the park.
• Dogs are only allowed where vehicles are allowed. 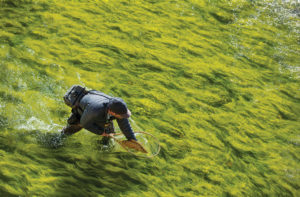 Fish numbers remain relatively low, but fish sizes are high on the Green River in the Seedskadee National Wildlife Refuge.

Where: Between Fontenelle Dam and the town of Green River in the Seedskadee National Wildlife Refuge
Best time of year: Spring, summer, and fall
Flies to use: Big streamers, LaFontaine Deep Sparkle Pupa, worm flies, and hoppers

As recently as the mid-1990s, the Green River below Fontenelle Dam kicked out some of the largest brown trout in the world, according to a Northwest Fly Fishing magazine article by Greg Thomas. But in the years following, the fishery collapsed due to a variety of factors, such as low winter flows, high summer temperatures, overfishing, and the introduction of non-native fish, such as the burbot that took to feeding on baby brown trout.

Fast forward to today, and the large brown trout population has rebounded, thanks to consistent flows and burbot catching contests downstream on Flaming Gorge Reservoir, that have helped to shrink that species’ numbers.

“I think it’s as good as it was in the mid-90s or better,” says veteran Green River fishing guide Dan Parson. “Today, there are more fish over 28 inches than in the mid-90s, and lots of fish over 24.” In 2019, Parson says he caught about a half dozen 28-plus-inch trout.

Even with the fishery’s recovery, this section remains relatively low density, both in terms of fish and anglers. Because there are fewer trout, they end up being larger due to having less competition for food, and the angler counts here are less than that of most comparable rivers.

The Green River rambles through a khaki-colored landscape seemingly in the middle of nowhere. The old Fontenelle town store has been abandoned, and the nearest amenities are at least 25 miles away, though camping is an option. The top four miles are on Bureau of Reclamation Land, after which the Green River flows through the willowy Seedskadee National Wildlife Refuge.

What to know:
• It’s possible to catch large brown trout, Snake River cutthroat, and Bonneville cutthroat up to 20 inches, along with healthy rainbows and bright kokanee salmon that quarry here in the fall.
• Streamers and nymphs are the best flies for the big ones, but hopper season can also bring up some gargoyles. 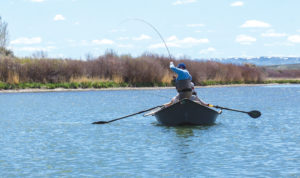 There are roughly 4,000 to 5,000 fish per mile, averaging about 18 inches, in the Grey Reef section of the North Platte River

The stretch of the North Platte, from Grey Reef Reservoir to Casper, known simply as Grey Reef, seems to me like it’s always fishing well. Primarily a rainbow and cutbow trout fishery, this section also hosts occasional cutthroats and large browns (3 to 5 percent are browns, according to the Wyoming Game and Fish Department) that are sometimes as big as two and a half feet.

On a May float trip with The Reef Fly Shop, based outside of Casper, we landed approximately 25 trout that ranged from 15 to 21 inches, and no one seemed all that impressed. “The average size is about 17 to 18 inches and about 2 pounds,” says Eric Anderson, general manager of The Reef. “What really has us excited is the number of healthy browns from 21 to 23 inches.”

What to know:
• This fertile fishery is similar to Montana’s Missouri River, but it’s crammed into a smaller package. It has roughly the same fish density (4,000 to 5,000 per mile) and trout size in a river that’s half the width and flows at a fraction of the cubic feet per second.
• The other sections of the Platte also offer good fishing, and nearby Casper is becoming a cultural hub with eclectic shops, restaurants, and museums.

Where: From Boysen Dam through Thermopolis
Best time of year: Spring through fall
Flies to use: Big streamers, San Juan Worm, hatch-matching dries for the Bighorn River section 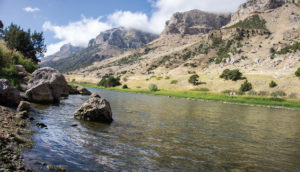 There are roughly 4,000 to 5,000 fish per mile, averaging about 18 inches, in the Grey Reef section of the North Platte River

The Wind/Bighorn River below Boysen Dam is an underrated gem. On this 12-mile stretch, in a stunning gorge with rock walls that stretch up for a half mile from the water, anglers can find both trophy-sized and average-sized trout, with browns being the most abundant.

Just below the canyon sits a boat ramp dubbed “The Wedding of the Waters,” due to the fact that this is where the river changes both its name and character. From this point on, it’s the Bighorn River, the same one that eventually runs through Fort Smith, Montana, know as one of the most famous sections for trout fishing in the country. It is a verdant stream that flows over ranch lands and through canyons, reservoirs, and more dams.

Fall is my favorite season here for the same reason it is everywhere else: fewer crowds and hyperphagic trout. Fewer browns but consistently big rainbows are the norm on the Big Horn stretch.

What to know:
• Located on the Wind River Indian Reservation, anglers need both a special fishing license and a trespass permit.
• Wind River Canyon Whitewater & Fly Fishing is the lone outfitter permitted to float the canyon, although non-guided wade-fishing opportunities are abundant.
• It’s not uncommon to find concentric circles of rising trout from bank to bank — the best hatches being midges, Baetis, and hoppers. Also try scuds, sowbugs, worms, and streamers.

Unlike Montana and Idaho, Wyoming’s stream access law is quite restrictive. In a nutshell, if it’s private property, you need permission to touch the stream bed. That means boots, boats, anchors — all of it. For anglers used to broad stream access, Wyoming’s no-touch law can be easy to forget amidst the excitement of a hooked trout as your boat bobs downstream. But it’s important to respect the laws of the land. For the full definition, visit wgfd.wyo.gov/fishing-update/fishing-access-what-is-trespassing.