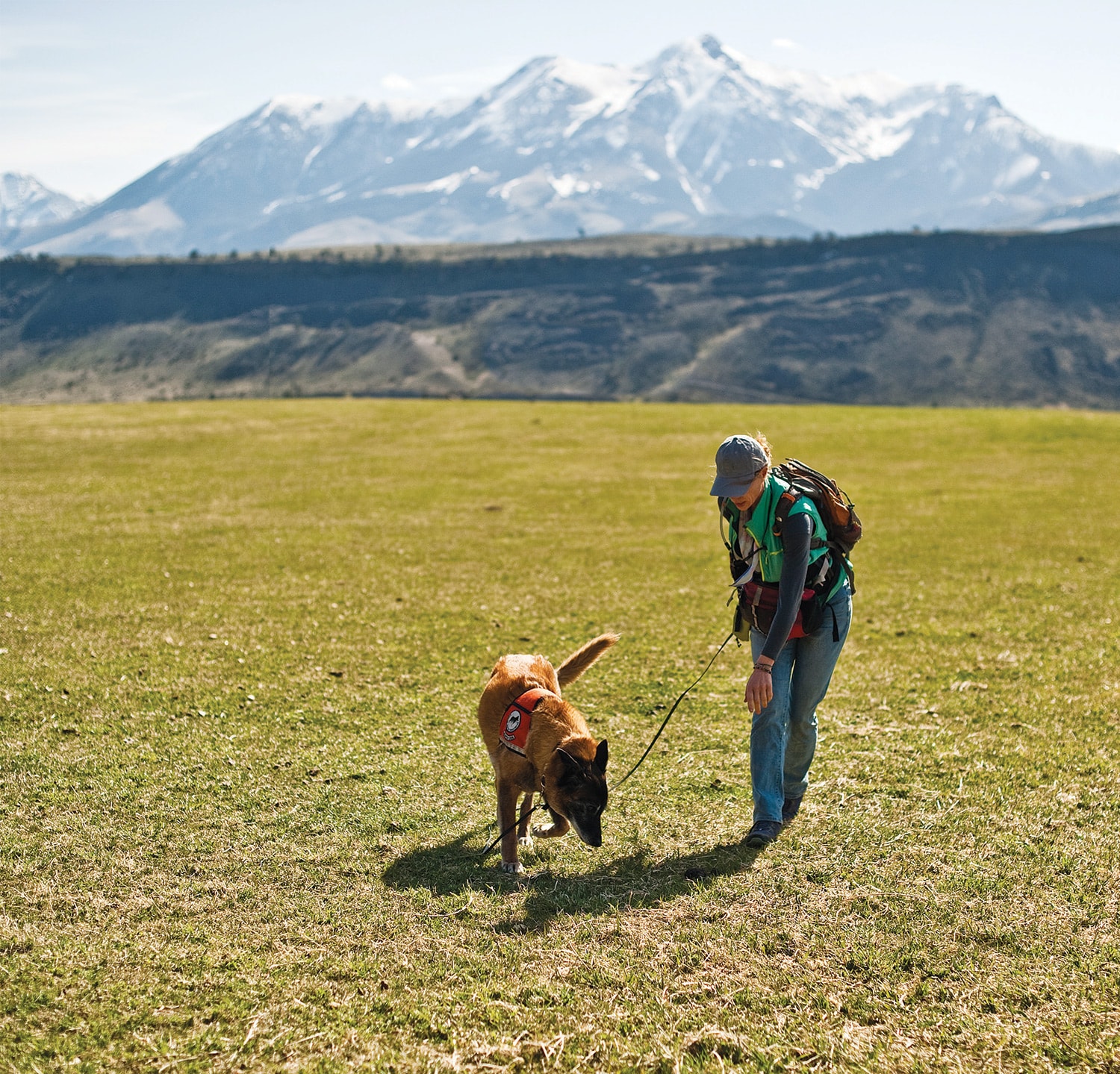 Pepin and his handler, Megan Parker, work the fields of Mountain Sky Guest Ranch as part of a brucellosis study.

ON A COLD, CLOUD-HEAVY SPRING DAY in Southwest Montana’s Paradise Valley, a Belgian malinois named Pepin trots from one pile of elk scat to the next, tongue lolling, nose glued to the ground, intent. Not far behind, his handler, Megan Parker, follows, providing words of encouragement when needed. A rubber ball sits in her pocket as a reward. 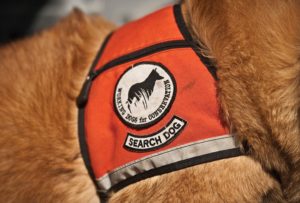 When the orange vest comes out, it means it’s time to work.

A star member of the Bozeman-based Working Dogs for Conservation (WD4C), Pepin’s task for the morning is to detect the presence of brucellosis, a bacterial infection 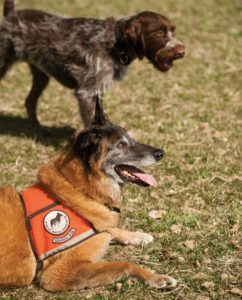 that often spreads from wildlife to cattle. The disease is endemic in the area’s elk herd, and there’s a good chance the odor signatures will show up in some of the scat.

Pepin is part of an elite team of biologists, scientists, and canines working on a wide range of conservation efforts. The brainchild of a group of passionate biologists who were searching for a less invasive way to track wildlife, WD4C was created in 2000. They regularly rescue high-drive shelter dogs (breeds that are highly active, both mentally and physically) — many of which otherwise would have been marked for euthanization. The group then trains them to be detection dogs, putting them to work protecting wildlife and wild places.

Since its beginnings, WD4C has trained dogs to recognize a long list of scents. Their dogs can track wildlife migration patterns and populations, detect invasive plants (even before they break ground), locate insects and aquatic species, and help prevent illegal wildlife trafficking. With a nose for difficult data, the dogs’ scent detection capabilities are nothing short of astounding — from brook trout, bears, wolves, kit foxes, and mussels, to ivory, teak, rhino horns, pangolin scales, certain poisons, and even firearms.

Pepin, who joined the WD4C pack in 2007, is trained to detect 20 scents, including snow leopard and wolverine scat. When his orange vest is strapped on, he is the consummate professional, diligently working the fields, moving swiftly toward his goal. Once it’s found, he signals his handler by lying down next to it. The reward is time spent playing with a cherished rubber ball. Parker, WD4C co-founder and director of research, allows Pepin to focus on the work at hand, but interrupts briefly to provide a drink from her CamelBak. Then, it’s on to the next detection. 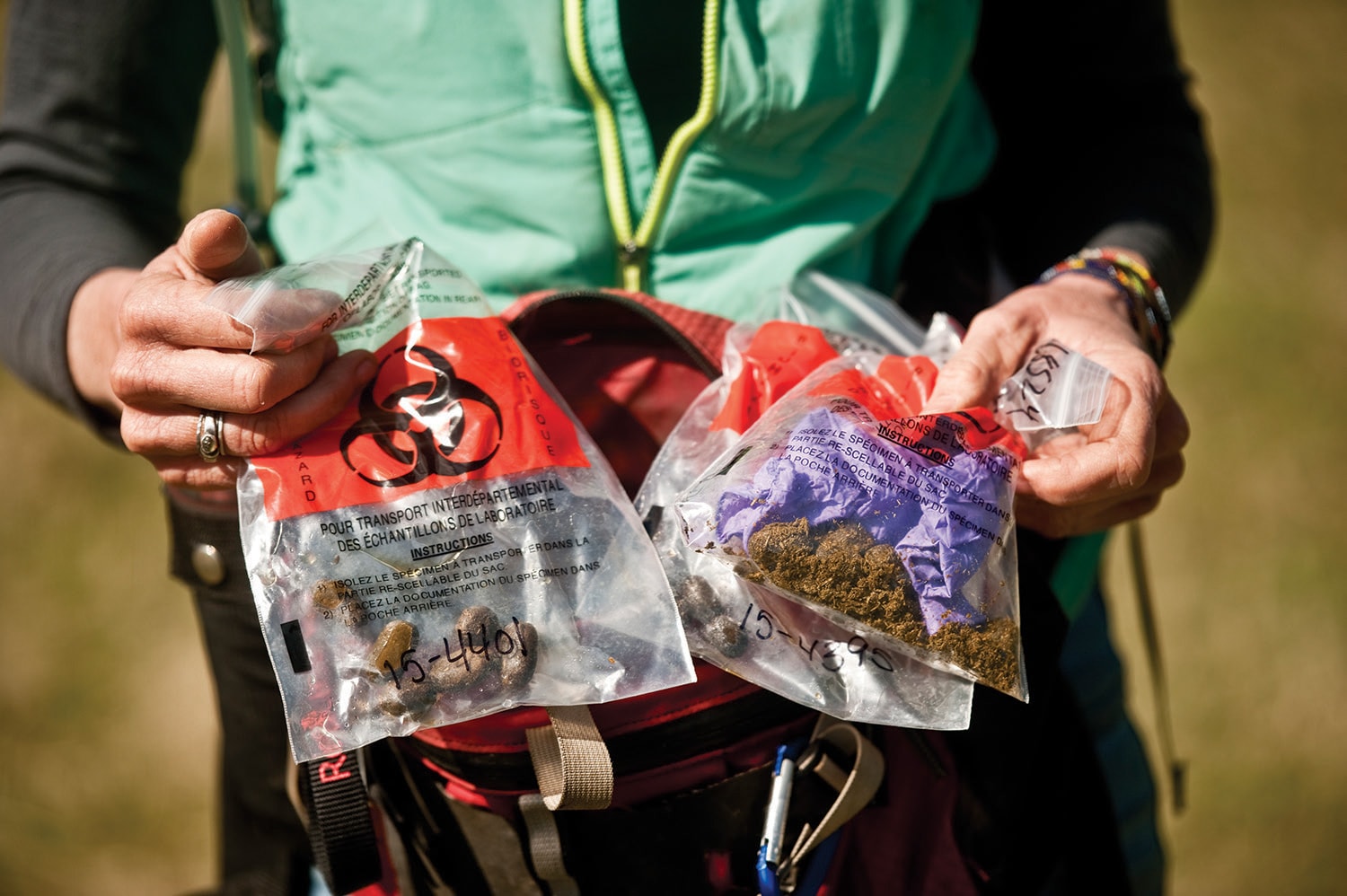 Parker holds samples of various animal scat that the dogs are trained to detect. 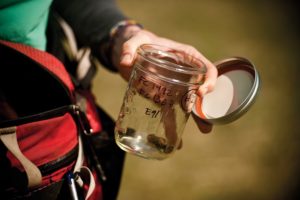 An elk scat sample is taken.

One of Pepin’s pack mates, Wicket, a 12-year-old black Labrador retriever mix, can detect 31 different scents, including rarities such as Hawaiian rosy wolf snails and Chinese moon bear scat. Wicket’s story is a perfect example of how rescuing dogs has become part of the group’s mission. For six months at a shelter in Anaconda, Montana, she spent her days barking incessantly and bouncing off the cement walls of her kennel. When WD4C co-founder Aimee Hurt came to the shelter, she offered Wicket a ball through the kennel bars. The dog was instantly mesmerized. Hurt told the shelter employee she wanted to adopt Wicket.

“That one?” the shelter worker asked. “But, that one’s crazy!”

“She may be just the right kind of crazy,” Hurt replied.

Eight weeks later (a record for training time), Wicket was in the field. Wicket’s work has since taken her on the hunt for wolf and grizzly bear scat near Yellowstone 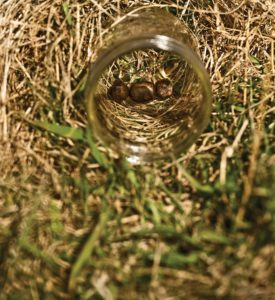 National Park, and sent her to 18 states and seven countries. After 12 years of service, she recently retired, but quantifying the conservation impact that Wicket’s unstoppable drive has yielded is nearly impossible.

The WD4C pack currently consists of 31 dogs of various breeds and backgrounds. Some, like Lily, a yellow Labrador, were high-strung and untrained before they were given a second chance at life, and, most importantly, a job. Breaking out their uniforms — a vest, and sometimes booties or goggles — acts as a signal to the dogs that it’s time to work.

Two of the dogs, Atlas and Ruger, are blind. Atlas, a yellow Labrador, displays athleticism and navigates obstacles so easily that it’s hard to believe he’s been blind since birth. For a recent project, he learned to detect the scent of shark fin. Ruger, a black Labrador, was a feral dog living on the Blackfeet reservation in Northern Montana when he was adopted. His then-owner recognized his potential as a detection dog and contacted WD4C. Although he was losing his sight when he joined the pack in 2014, that didn’t stop him from learning to detect eight unique scents, including firearms and ivory.

WD4C clients and partners include the U.S. Fish and Wildlife Service, REI, the National Park Service, Petco Foundation, Emory University, Oregon State University, WildAid, Encana Natural Gas, National Geographic, and Patagonia, among others. Some projects take dogs and handlers to international destinations; Ruger, Earl, and Chai are stationed permanently at Conservation South Luangwa in Zambia as part of an anti-poaching program. Closer to home in Montana, a dog named Ismay hunts for invasive mussels on watercraft, making quick work of what used to be time-intensive checkpoints. 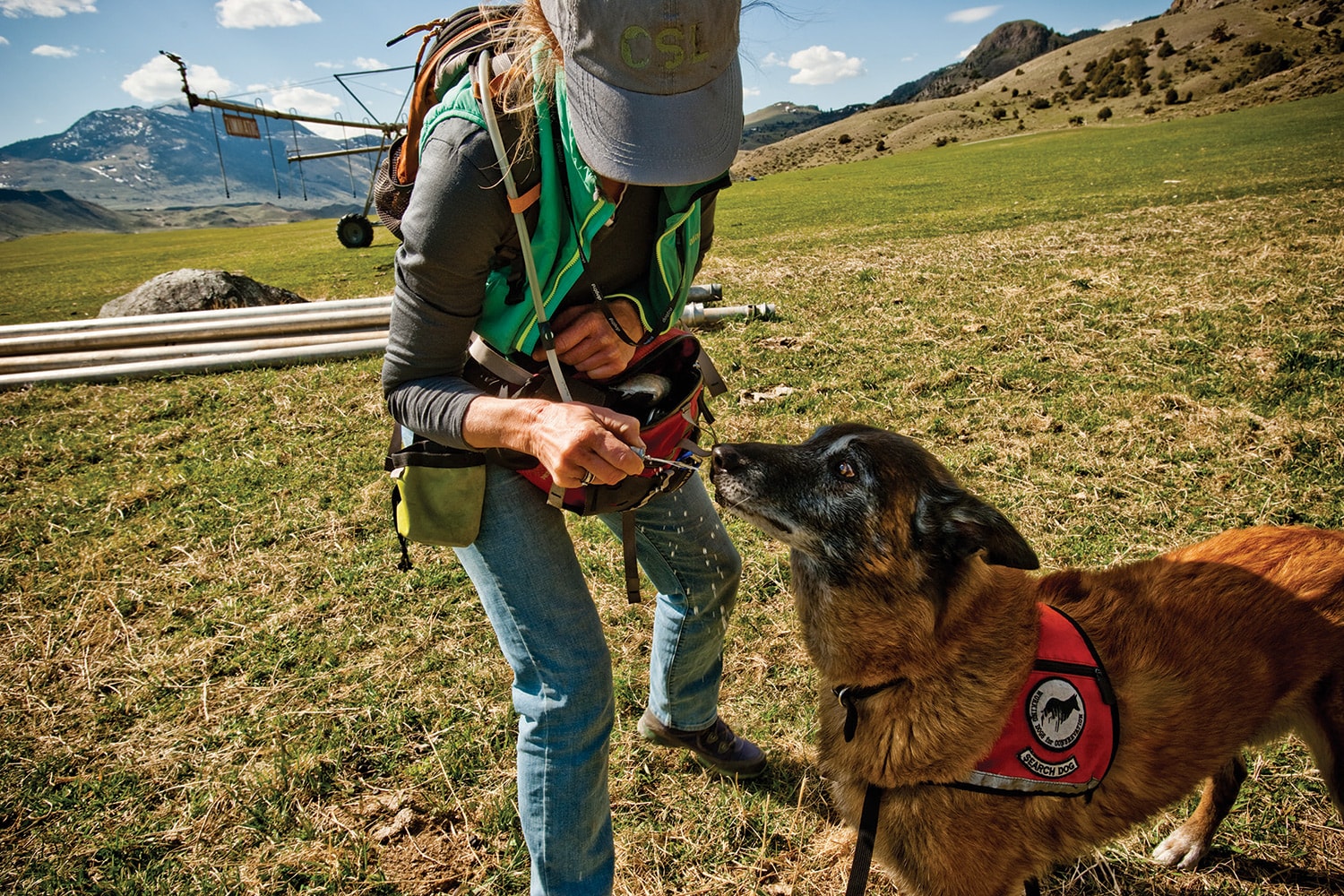 Parker pauses Pepin to provide a well-deserved drink from her CamelBak.

WD4C’s Centennial Carnivore Connectivity Project identified habitat and migration patterns of grizzly and black bears, mountain lions, and wolves in Idaho and Montana. Four dogs worked to identify each of these types of scat, allowing their human management team to collect five years’ worth of data, providing insight into the migratory corridor between the Greater Yellowstone Ecosystem and Idaho’s wilderness areas.

On this day, Parker works with Pepin on the Mountain Sky Guest Ranch in Paradise Valley. WD4C has teamed up with ranch owner Arthur M. Blank, also the owner of Home Depot and the Atlanta Falcons, in partnership with The Arthur M. Blank Family Foundation. This groundbreaking study aims to determine more effective methods of detecting disease and improving its management. With the capabilities of these highly-trained dogs to sniff out illness in free-range wildlife populations, a non-invasive, efficient solution may be at hand.

Brucellosis is a contagious, costly bacterial disease typically infecting cattle, bison, elk, and deer, and over the last century, it has caused devastating losses to ranchers and farmers. Swine, goats, and even humans also can become ill when the disease is passed on. In cattle and bison, it causes late-term abortions, infertility, and lowered milk production, and treatment has not yet been successful in animals. 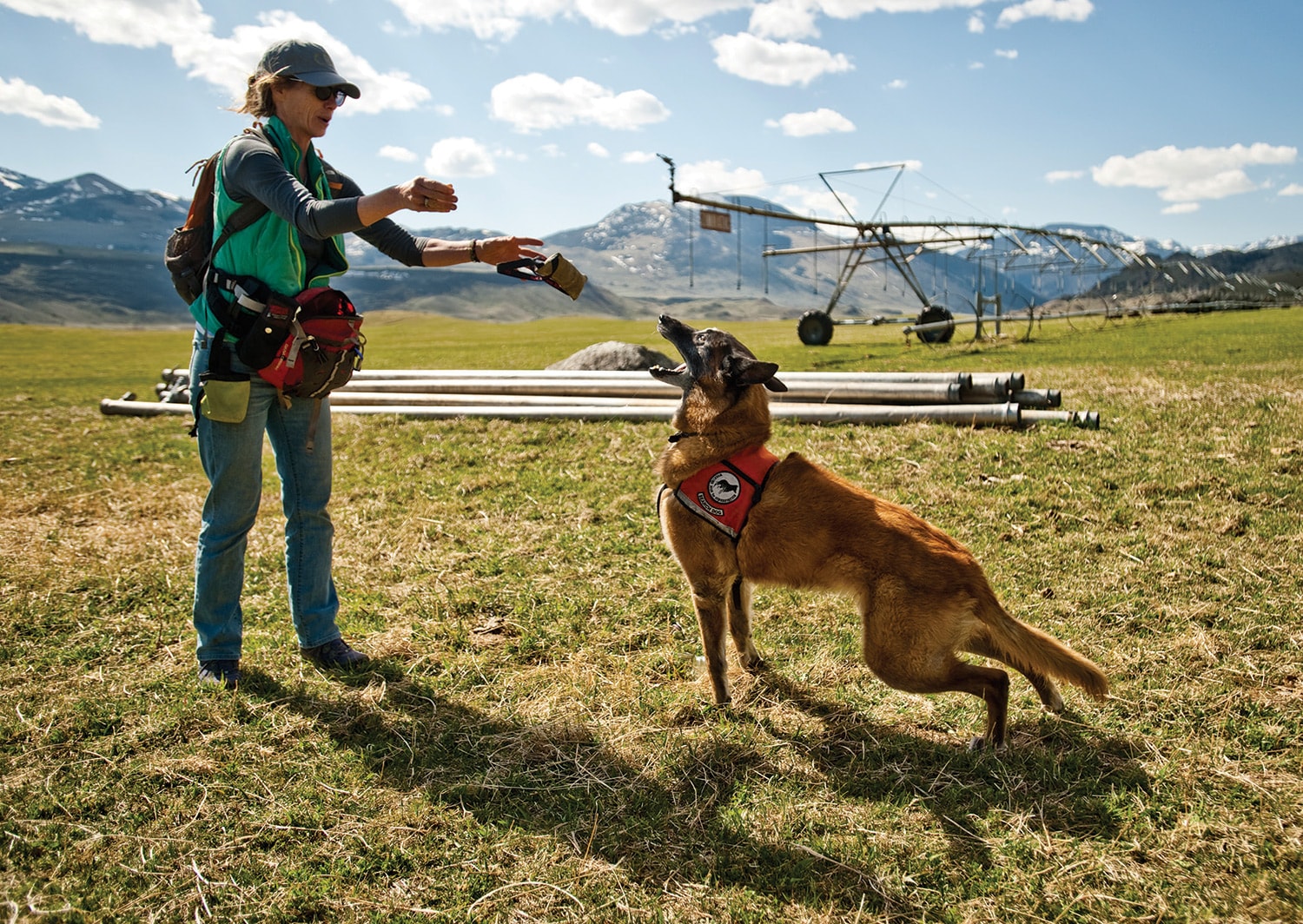 Parker says that when she’s training a dog on a new scent, she can see the light go off once it’s detected.

According to the U.S. Department of Agriculture (USDA), 48 states had successfully eradicated the disease by the early 2000s — the exception being the greater Yellowstone area, where bison and elk still carry it. “While the USDA has worked to eradicate brucellosis, it also remains committed to maintaining a viable and free-roaming bison herd in Yellowstone National Park,” explains a report by the federal Animal and Plant Health Inspection Service.

The brucellosis battle has fueled tensions between groups on both sides of the wildlife management issue. Bison are emblematic of Yellowstone National Park and have deep ties to American history, culture, and wildlife conservation. At the same time, livestock production in Paradise Valley has long been an economic driver for the area.

“The link between ranching and open lands, wildlife habitat, and the Western way of life are often ignored, as the National Park Service blames ranchers for not being tolerant, or environmentalists demonize ranchers for causing the slaughter of bison attempting to leave Yellowstone National Park,” says Whitney Tilt, director of land and wildlife conservation for The Arthur M. Blank Family Foundation. “Lost in the smoke of debate is the link between bison as the wild reservoir for brucellosis, elk as vectors for disease, and cattle on private lands where the disease and the efforts to prevent it costs ranchers real time and money in a business with notoriously narrow profit margins.”

Blank and the Mountain Sky Guest Ranch want to demonstrate the economic, ecological, and social benefits of better disease management. The foundation’s goal is to “create a model for bringing together land and livestock owners with wildlife managers to constructively engage in reducing the costs of disease.” WD4C may provide a middle-ground solution: The dogs can help map and reduce the number of diseased livestock, and dog/handler teams can give ranchers the ability to know whether infected wildlife have used their pastures before their cattle graze that land.

If the dogs detect the scat of infected elk or bison, the pastures can then be screened for aborted fetuses, the most likely vector by which brucellosis can be transmitted to cattle. Until now, this kind of screening has only been possible through expensive capture and handling operations, followed by costly and time-consuming tests to determine the disease status of the handled animals, Tilt explains. By offering a less expensive and immediate indication of disease risk, WD4C can give ranchers a far greater ability to protect their animals, more incentive to tolerate elk and bison on their properties, and expanded opportunities to pursue livestock-related livelihoods where wildlife occur. 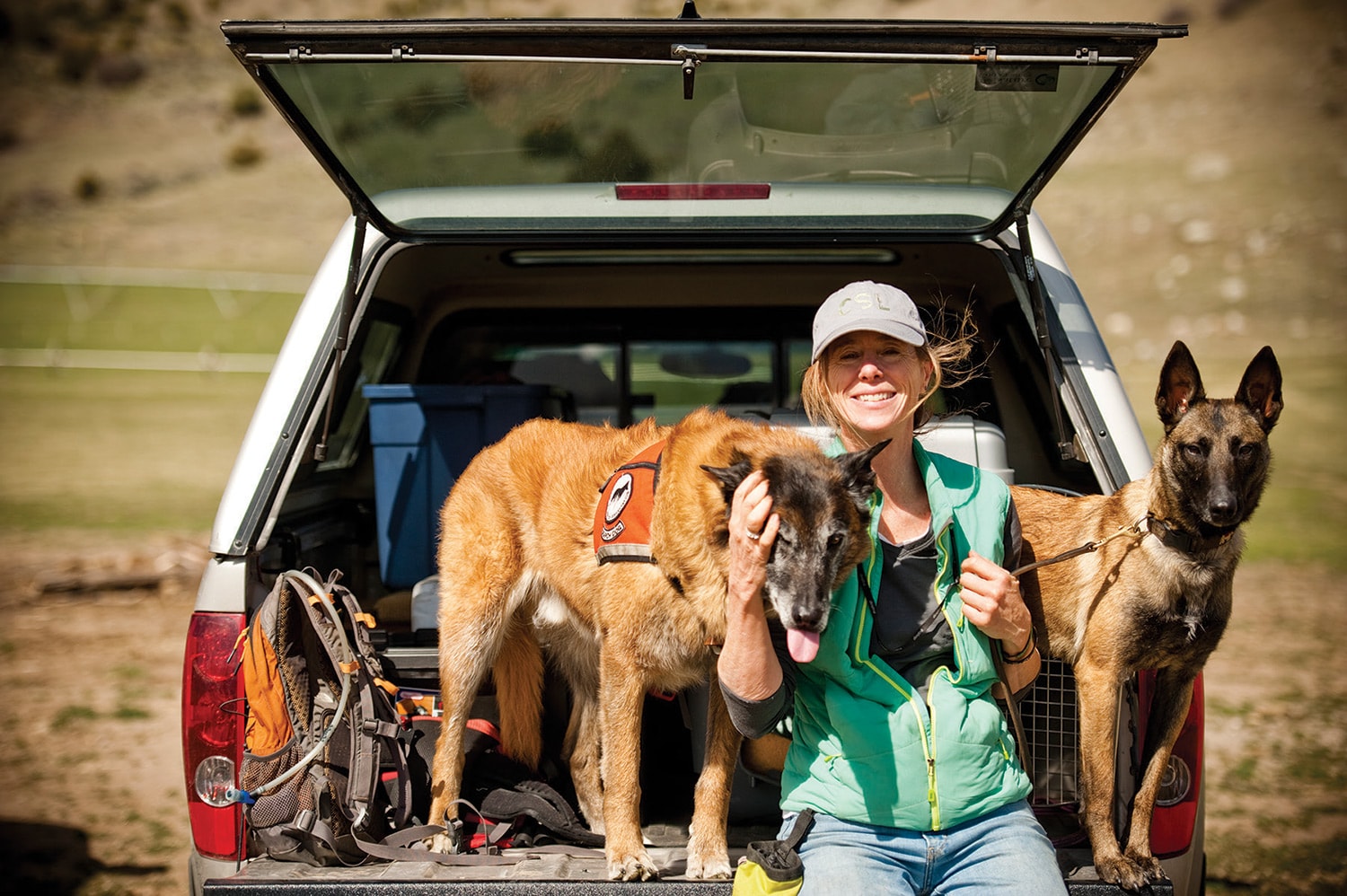 Pepin gets an affectionate rub from Parker after a hard day’s work.

A second anticipated outcome is more effective and efficient mapping of the spatial extent of brucellosis. This could minimize or even eliminate the need for costly and dangerous handling operations and free up funds for managing the disease rather than simply tracking its distribution. Better monitoring also will help reduce uncertainty about potential transmissions and the extent of the areas inside, which ranchers need to screen cattle for disease.

“When WD4C pitched the idea of using dogs for brucellosis detection, I thought the concept well worth the effort, as pitting bison versus ranchers, elk versus bison, environmentalists against ranchers, and state agencies against federal agencies just isn’t making much sense, and detection dogs may well be part of the answer,” Tilt says. “Over the course of my career in conservation, I have seen dogs play an increasingly important role in conservation biology.”

“It’s challenging work and not every dog can do it,” Parker adds. “But the ability to detect brucellosis was 83 percent, which is quite high.”

On this day, Pepin’s nose twitches in the breeze as he works the ranch fields like the pro that he is. A younger dog-in-training watches, anxious to join in. “We ask a lot of these dogs, but they are veterans,” Parker says. “When training on a new scent, you see the light go off for a dog. Pepin is a lot of dog. He lives a full life, but working is his biggest joy. When I put his working vest on, he is completely focused.”

With today’s task completed, Pepin fetches the reward ball, tongue wagging with joy. Parker calls him up on the truck bed for a congratulatory rub. Once off the clock, Pepin will turn his attention to kisses, cuddling, and taking up most of the bed.