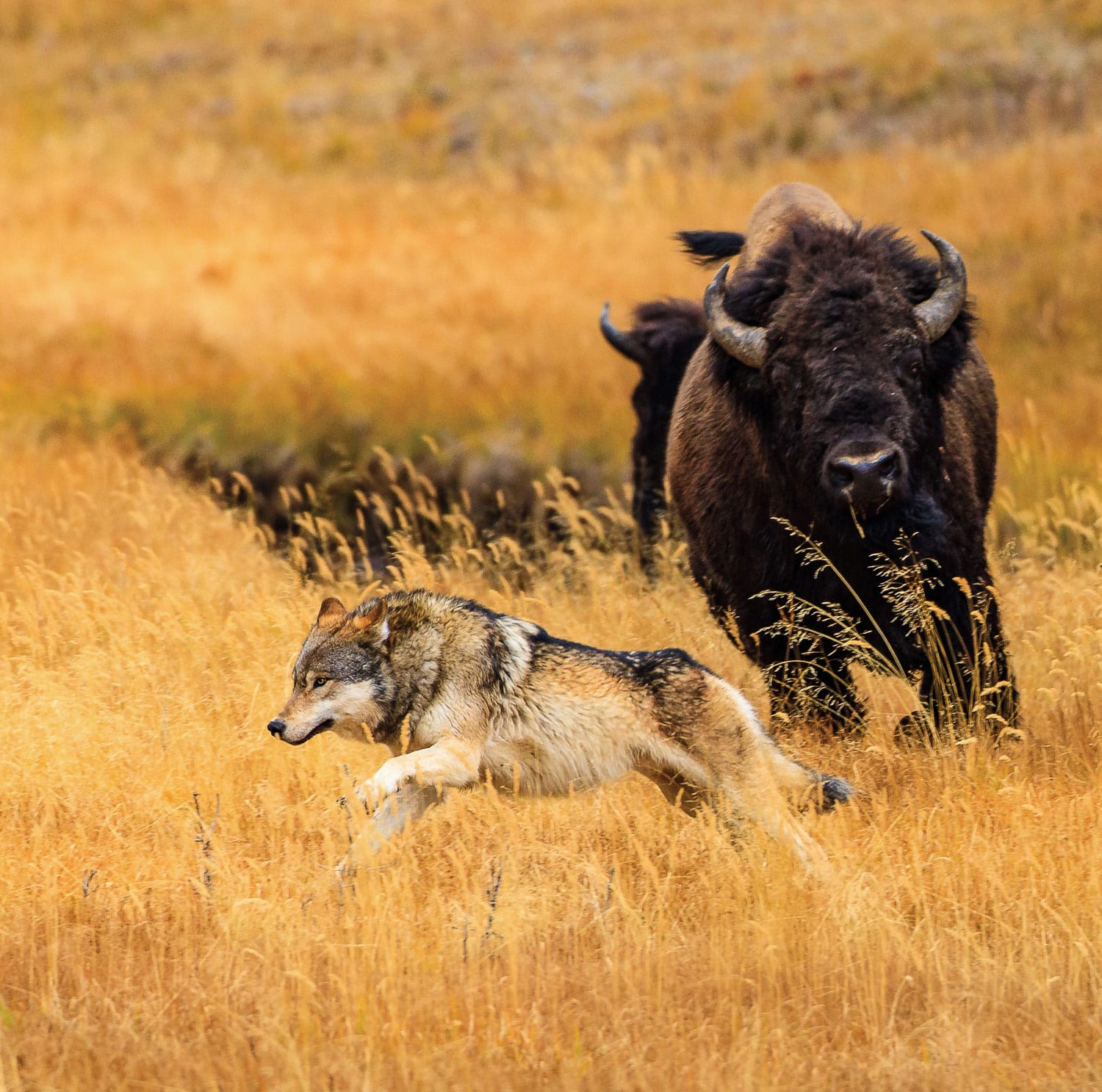 The allure of life and death in the wild

It was early morning and I was traveling through Yellowstone National Park with graduate students who were taking my course on writing about the West, when our host, a representative of the Yellowstone Association, got a call.

“Wolves,” he said. “Two of them have killed a bull elk near Soda Butte.” 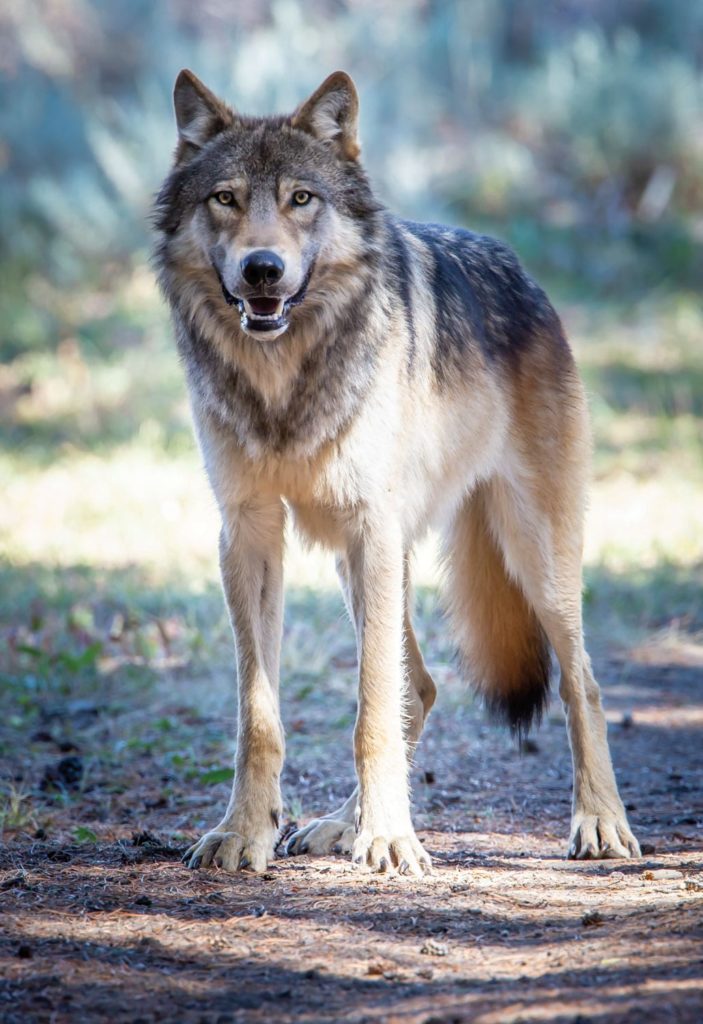 “They don’t have thumbs,” writes Rick Bass, referring to wolves. “All they’ve got is teeth, long legs, and — I have to say this — great hearts.” Photography: Cindy Goeddel

“Here we go,” said Charlie Amlanar, the graduate dean who had arranged the trip. We had read Barry Lopez’s book Of Wolves and Men, Rick Bass’ The Ninemile Wolves, and Doug Smith and Gary Ferguson’s Decade of the Wolf. Now we wanted to see wolves in the wild.

Then we saw the crowd at Soda Butte. Cars, vans, and trucks lined the road — huge spotting scopes were set up everywhere. We couldn’t get within a quarter of a mile of the wolves, and we could barely see them through our scopes. It became clear to me then: People sure do like to watch wolves. What is the allure of these wild creatures?

Meriwether Lewis and William Clark were likely the first American wolf watchers west of the Mississippi. In his diary on June 3, 1805, Lewis records a description of the huge herds of buffalo in the valley below a Corps of Discovery campsite. They spread out in every direction on the vast plain, notes Lewis, “attended by their shepperds (sic) the wolves.”

Later in the 19th century, after the buffalo began to vanish — killed in large numbers for their hides and tongues — Americans also brutally exterminated thousands of wolves, using everything from strychnine to arsenic to leg-iron traps. But then another kind of wolf watcher appeared.

Ernest Thompson Seton migrated south from Canada in the 1890s. He was a wildlife artist, a writer, and a wolf bounty hunter. He boasted that he could trap and kill even the craftiest wolf. At 33, he came to New Mexico and took on the challenge of killing a wolf that had become such a legend that local ranchers had named him Lobo, King of the Carrumpaw, due to the fact that he and his pack preyed on cattle in the Carrumpaw region of the state. The demise of the buffalo had forced wolves to eat cattle. Seton was unsuccessful in his early attempts to trap and kill Lobo. Then he discovered Lobo’s mate: “Blanca,” Seton called her. Seton reasoned that if he trapped and killed Blanca, he could use the scent of her blood to lure Lobo into a trap he would otherwise be wary of. 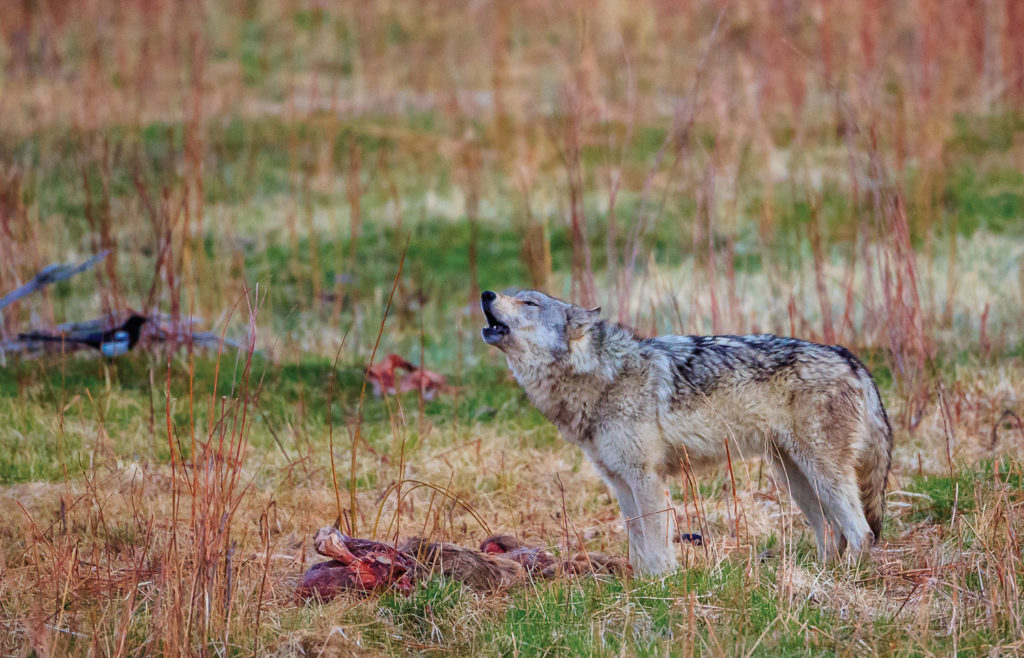 Howls are one of the primary ways wolves communicate with one another. Scientists believe they can hear each other howl from six to 10 miles away. Photography: Dave M. Shumway

The plan worked, but in following it through, Seton saw something he never expected: the loyalty and fidelity of a creature that he had assumed was at best a nuisance, at worst the embodiment of evil. The very qualities that made it possible for him to trap Lobo were those that made human beings fight and die for each other. He collected his bounty and headed back to Canada a changed man. There he wrote a story entitled, “Lobo, King of the Carrumpaw,” that was published in Scribner’s Magazine. It was the first step in changing the way Americans saw wolves. David Witt states in his book, Ernest Thompson Seton: The Life and Legacy of an Artist and a Conservationist, that “Lobo, King of the Carrumpaw” was likely the first environmental story ever written. 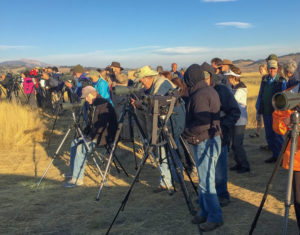 It’s been more than 120 years since Seton wrote that story, and we are still watching and killing wolves. The reintroduction of wolves in Yellowstone brought back that strange longing that wolves seem to inspire in human beings: the fascination that draws wolf watchers into the Lamar Valley at dawn, morning after morning, to get a glimpse of a real wolf.

The wolf watchers that my students and I met in the Lamar Valley knew individual wolves by number — 41, 121, O-Six. It was as if they were family. Famed storyteller and Yellowstone ranger Rick McIntyre keeps a journal, detailing the habits of various packs and individual wolves in the park. According to Smith in Decade of the Wolf, McIntyre’s journal is longer than the Bible. Leaning against his truck, McIntyre charmed us with stories of Wolf 21 leaving his pack and climbing up to his summer hunting ground to remember his life as he awaited death at the age of 9, quite old for a wolf in the wild.

We heard other wolf stories in the evenings at the Range Rider, the log cabin in Silver Gate where we stayed. It was in the midst of being remodeled, and the front door wouldn’t lock. Every evening strangers walked in and started talking. It was cold that June — it even snowed, and we built fires in the huge fireplace next to the bar.

We heard stories about how the Range Rider had once been a whorehouse and a bar, how Ernest Hemingway had frequently visited that bar, driving in from Ketchum, Idaho. My students wanted to verify each story. I reminded them that a core part of Western lore is understanding that you can never know the truth. Perhaps it is the same with wolves. As much as we think we know about them, there is something that is beyond us. Perhaps that is why we keep watching them, not sure what it is we see in them. 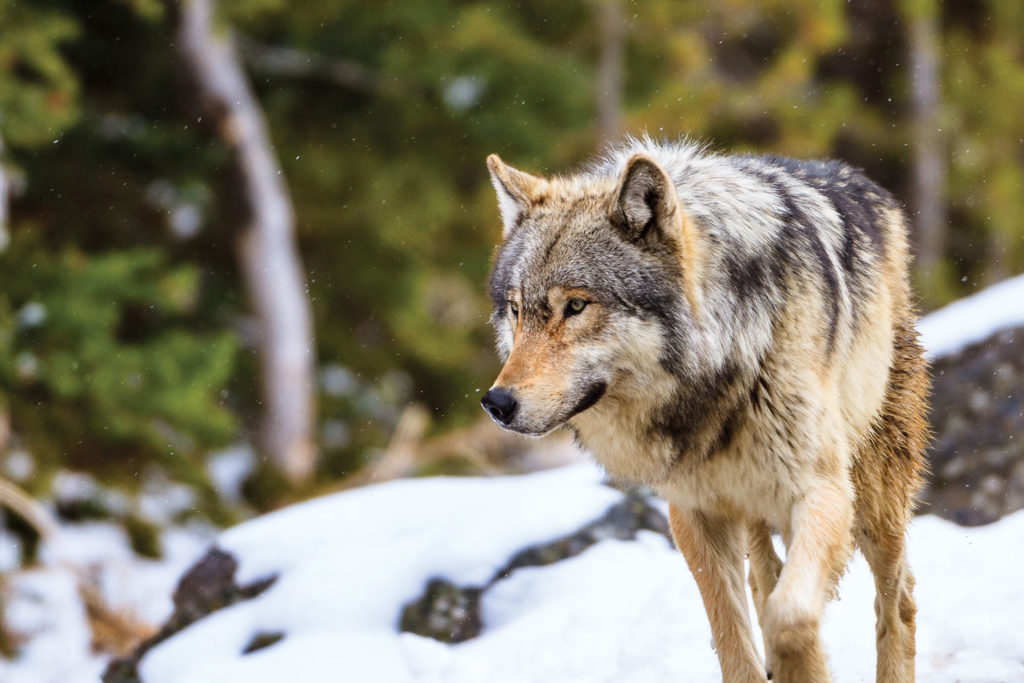 One night, we arrived back at the Range Rider and walked into what appeared to be a church service. It was a gathering of wolf watchers in the cafeteria section, mourning one of their own who had died. They told stories about their friend, about wolves they had watched together — all of it in the hushed tones that people use at funerals. These people were knitted together by the spirit of wildness that they saw in this place, in these creatures. One woman told me that she had made a single trip to Yellowstone years before. After seeing wolves on that trip, she came back every weekend until she reached retirement. Then, she moved to Silver Gate to become a full-time wolf watcher.

Smith, The biologistwho brought wolves back to Yellowstone and heads up the wolf study program, tells me that they are not creatures that adapt to humans in the way that deer, elk, and mountain lions do. They need lots of space, and they fight for their territory. Recalling this conversation several days later, I realized how human they seem. For that is what we do: set out our boundary lines and defend them — whether it be our yard, our ranch, or our country. We don’t have fangs and claws. We have rifles and bombs and tanks and nuclear weapons.

In his book, Of Wolves and Men, Lopez characterizes man as a creature who does not understand his place in the world and is too insecure to admit it. The result is the transformation of the world into a human sphere, a place where there is no real wilderness. For some of us, that is the inevitable cost of civilization. But for others of us, there is a longing for a world in which man is a creature among creatures, not the center but part of the whole. The sense of such a world came to me when I talked with the wolf watchers at the Range Rider. 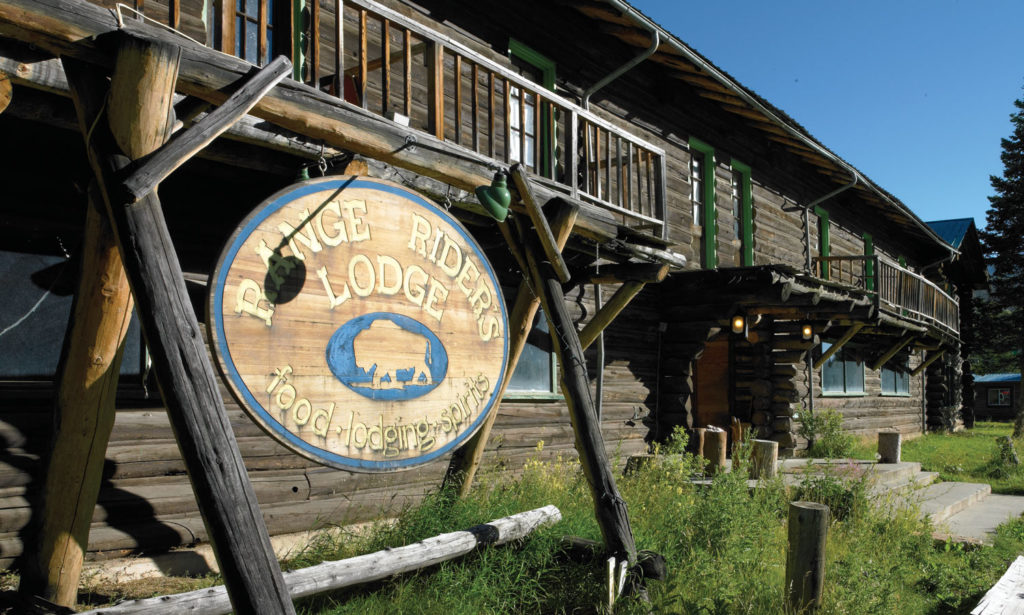 What do wolf watchers see in these creatures? Why do they keep coming back? I finally came back to the park myself and stayed for another week. I set up an interview with Smith. I had a line from his book that I wanted to understand. He describes a wolf running away from a spotter plane he was in: The animal looked up at the airplane with “magnificent, bright, and burning eyes.” According to Smith, most animals in that circumstance would have been “overcome with fear.” This lone wolf was “brimming with confidence,” so much so that it gazed hard at the airplane before it “stepped away, back into its element.” In explaining that look, Smith told me a story he had heard from members of his staff, the story of Wolf 911.

The group came upon 911 and could tell that he was starving — reduced to skin and bones. He was topping a ridge where he saw an elk and several members of a rival pack. It was a moment of life or death: try for the elk while risking an attack from the other wolves, or starve. Wolf 911 catapulted himself toward the elk and killed it with what was likely his last ounce of strength. Then the rival pack gathered, killed him, and devoured his elk. But at least he tried. It was in so many respects emblematic of the history of wolves in America — hated, annihilated, but still claiming their place.

I thought about that story all the way home. I still think about it. Perhaps that is what makes so many of us wolf watchers. “They don’t have thumbs,” Rick Bass writes. “All they’ve got is teeth, long legs, and — I have to say this — great hearts.” Every day, they face down demons that most of us never see, for we have created a human culture that attempts to abolish threats. Even nuclear war and devastation is, for most of us, an abstract threat. If we are hungry, we go to a restaurant. The meat we eat is often disconnected from a living, breathing creature.

But in our bones, in our genes, there is an echo, a dim memory of a time when every day was a struggle to survive. Perhaps wolves take us back to the stark reality of life and death, to what it really means to be alive.