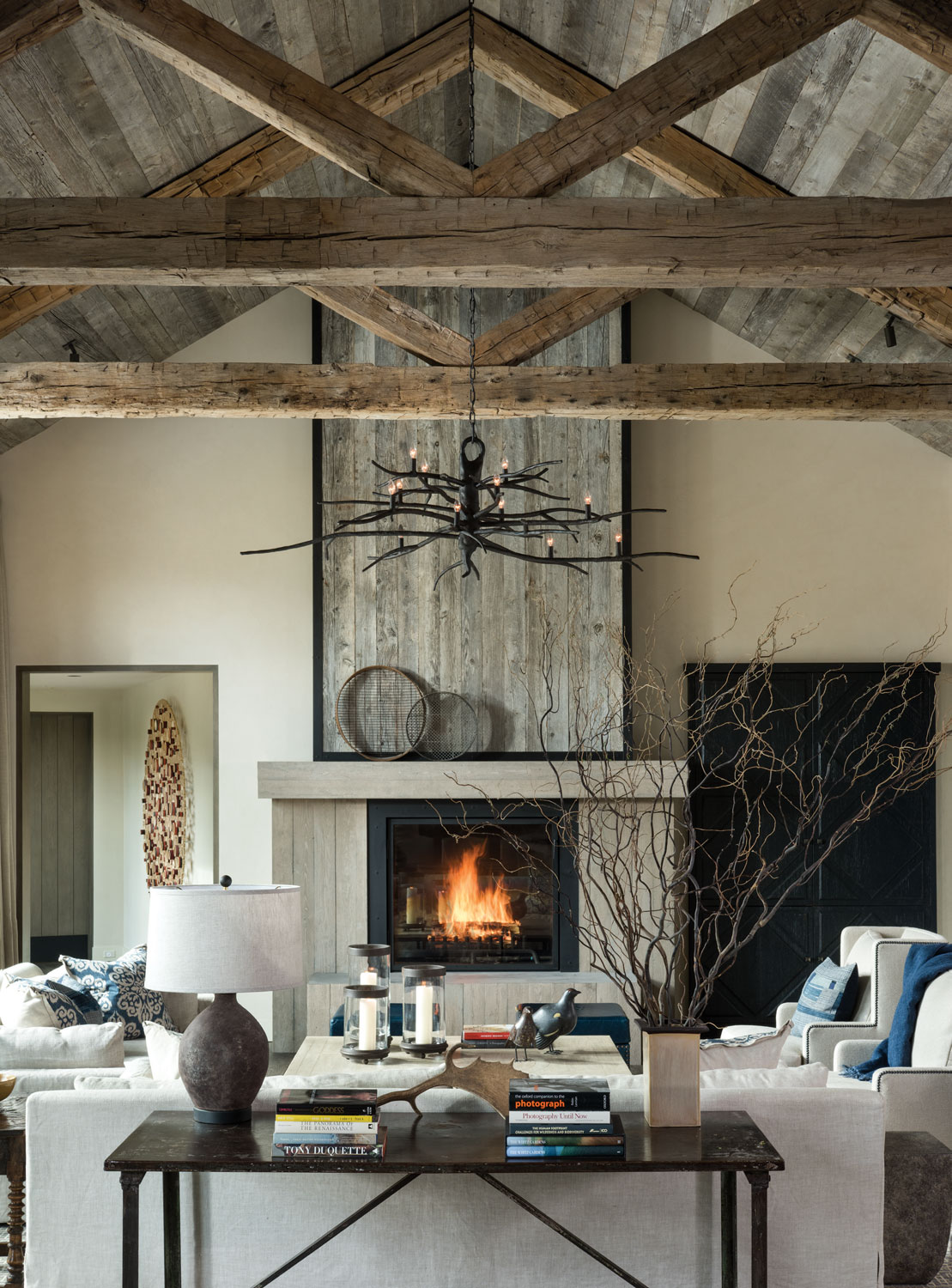 A home on the Big Wood River in Ketchum, Idaho, designed by architect Janet Jarvis and the late interior designer Toni Breck and built by contractor Mat Hall, was inspired by Japanese woodwork, specifically the Shou Sugi Ban wood-charring technique.

Years ago, Idaho-based builder Mat Hall read about the ancient Japanese wood-preserving technique called Shou Sugi Ban. The treatment involves charring wood to promote resistance to fire, degradation, and pests, and it results in a beautiful dark tone with unusual texture and depth. At the time, he was intrigued enough to post a photo on Facebook with the caption: “Any takers?” It never occurred to him that years later, he would be asked to construct an entire home and guesthouse using the process. 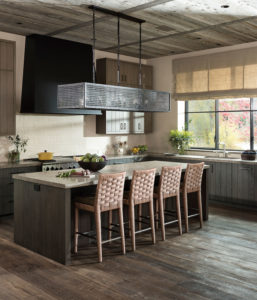 Inside the home, serenity is achieved through a reductive palette of reclaimed wood and beams, neutral wall colors, and clean lines. The kitchen countertops are made of flamed limestone, and the French oak flooring came from First, Last & Always in San Francisco.

The homeowners had purchased a riverside property in Ketchum, Idaho, and assembled their team of builders, architects, and designers before taking a trip to Japan. They already knew they wanted a regionally appropriate look with clean lines and contemporary touches. But when they saw the beauty and longevity of Japan’s ancient temples, they were intrigued. Their architect and contractor were game, and it wasn’t long before a makeshift wood-flaming station was set up along the banks of the Big Wood River. “The homeowners’ goal,” explains architect Janet Jarvis of The Jarvis Group Architects, “was to build a structure so subtle that it would disappear into nature.” 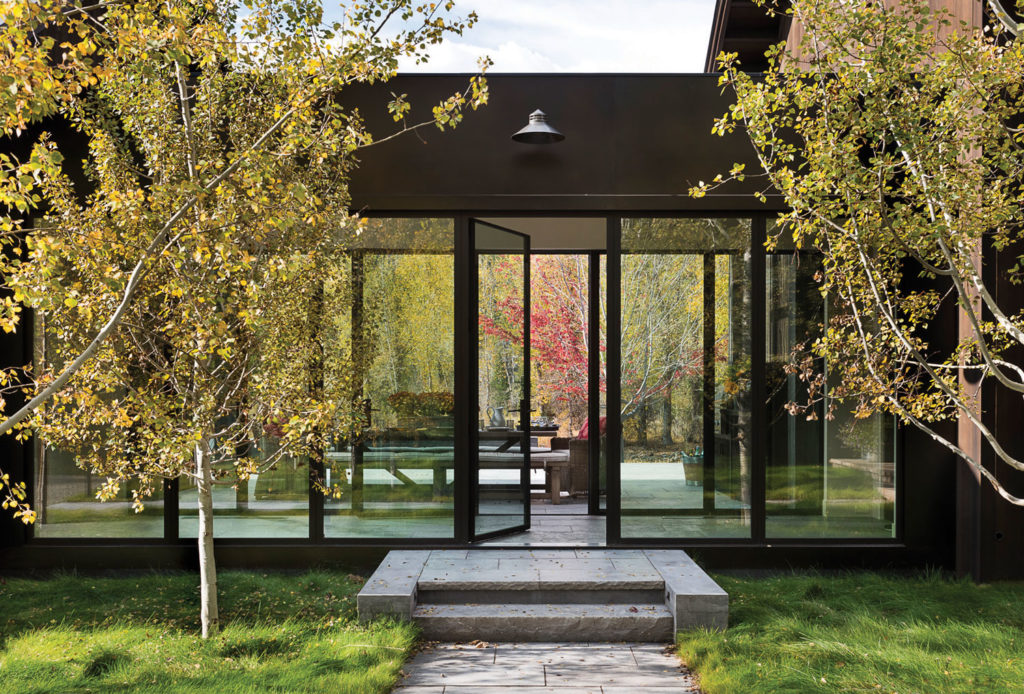 The house is nestled into the site, with the back to the road and the main volumes opening up to the river and mountain views beyond.

Given the site, this goal made sense. The mostly level parcel, although close to a main road, was graced with mature cottonwoods and evergreens on the willow-lined banks of the river north of Ketchum, situated directly across from protected public lands. “What’s unique about the property,” says Hall, “is its view corridor up and down the river and to the west. You can’t see any other houses.” When you’re in the house, you look downriver. From the master bedroom you have half a mile of river views running north to south. Even though there’s a house nearby, you can’t see it. “You can’t see anything,” he adds, “except for nature.” 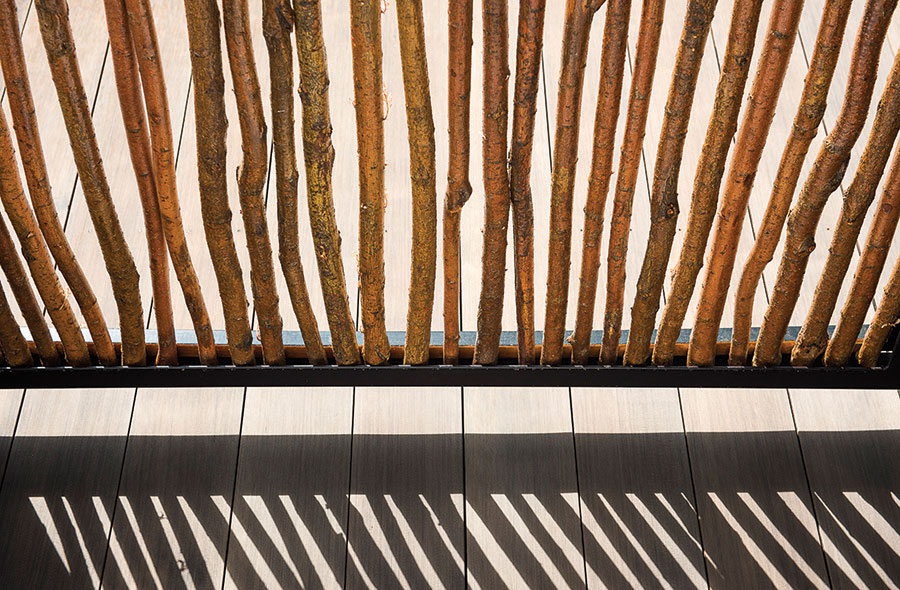 The closest neighbor, in fact, was their longtime friend and interior designer, the late Toni Breck, and her husband. Jarvis also designed the Breck home, so the new project would be carried out by a like-minded team of players who either had already worked together or at least understood each others’ styles. The property came with an existing house, as well as a pond and canals, which necessitated a land restoration project. Unfortunately, the only viable solution for the problems that came with the 1960s home, including insufficient insulation and lava rock details, was to start over. 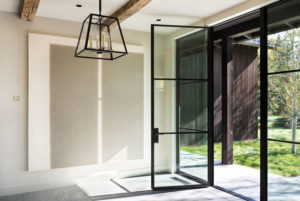 A glass door system by Jada opens to a painting by Amikam Toren from the Jessica Silverman Gallery in San Francisco. The light fixture is from Gregorius | Pineo. 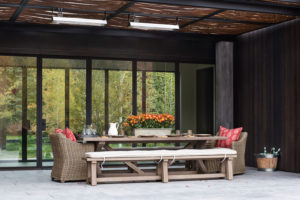 The outdoor dining set is from Restoration Hardware.

The new master suite closest to the river had to be positioned on the existing footprint in order to maintain its proximity. The two-bedroom guest house was built first, both as a trial for the Shou Sugi Ban technique, and to provide a living space once the main house came down. The result is a graceful, quiet structure, lent a certain gravity by the exterior treatment. By the time they were ready to break ground on the primary residence, however, the team had explored alternatives to the do-it-yourself method of Shou Sugi Ban due to the fact that they had concerns about its performance under the intense high-altitude solar exposure and often-harsh weather. On top of that, their original method involved an extremely time-consuming process. After much research, they ended up sourcing the remainder of the wood, already treated with a charring technique, from a specialist supplier. 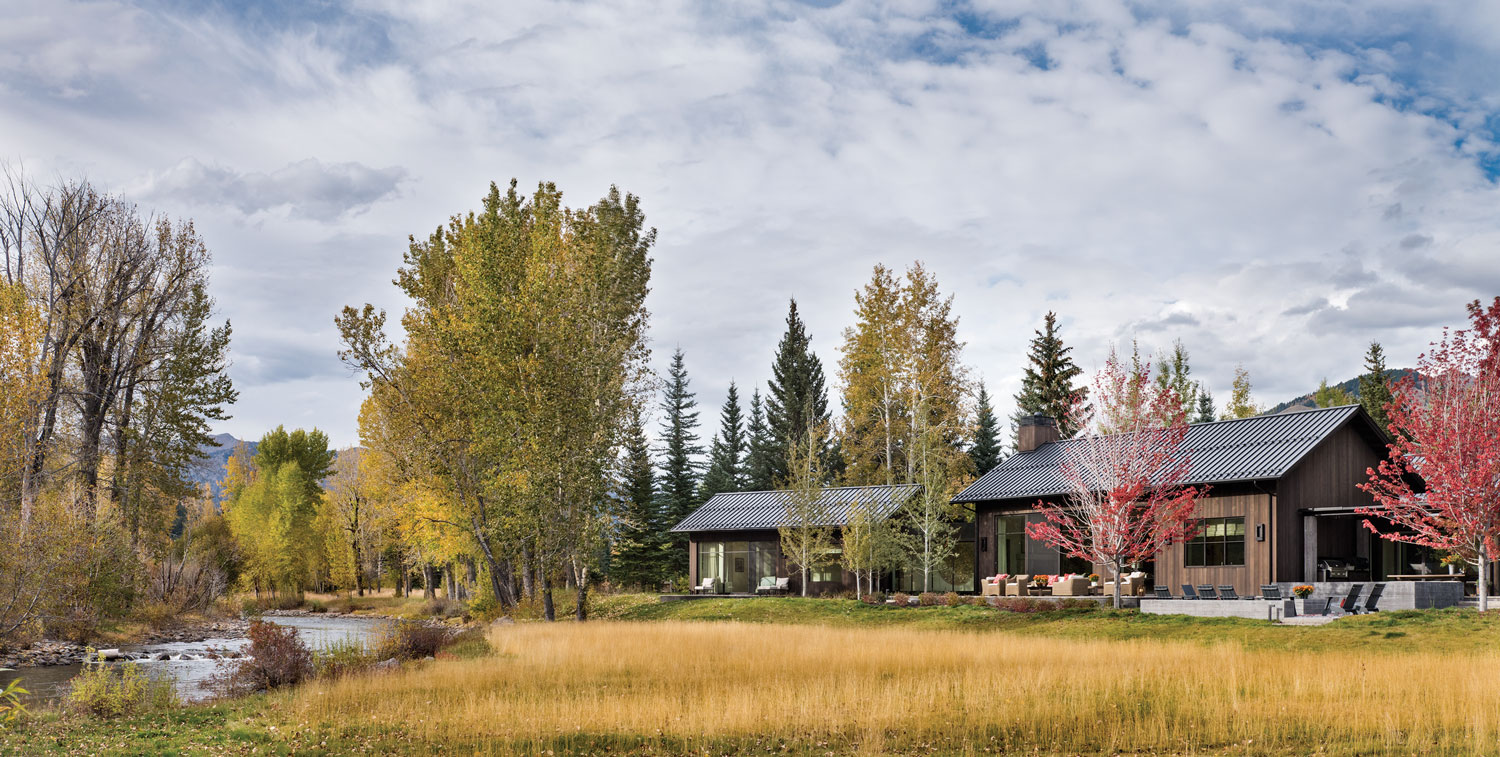 The house is set near the river, with peaceful views in every season.

The house lies close to the water for a profoundly immersive experience; it turns its back to the road to take in the river, the trees, and the expansive views. Jarvis conceived of the primary structure as four forms — a master bedroom wing, shared living areas, a guest wing, and a garage with a second-story recreation room and an office joined by glass-walled hallways. “The homeowners wanted each form to feel barnlike in its simplicity, but more contemporary in its execution,” she says. “They had a very clear vision from the beginning, starting with materials: dark wood, steel windows, standing seam metal roofs, clay plaster on the walls, and some reclaimed [lumber] on floors and ceilings used in a fresher, crisper context.” 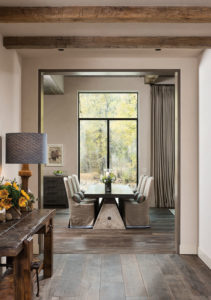 A hallway off the entry leads to the great room, dining area, and kitchen. The table and chairs are from Resto- ration Hardware, and the floors are made of reclaimed oak. A neutral palette keeps the focus on the outdoors.

“The idea is that the house would play second fiddle to the property,” explains the wife. “It’s the land that would be the star attraction. We wanted it very simple: a dark house with dark steel windows and no stone. The notion was to have it fade away, so you’d just focus on the river and the mountains.”

The house has many original details, such as a fireplace made of board-formed concrete, a snow-fence-paneled library designed specifically for the owners’ inherited collection of first-edition Dickens novels, and a carefully curated art collection. An artisan from Rexburg, Idaho, built a willow trellis on removable panels that provides protection from the sun and introduces handcrafted appeal. The natural willow material references the home’s riverside setting, while enhancing the immersive indoor-outdoor experience. 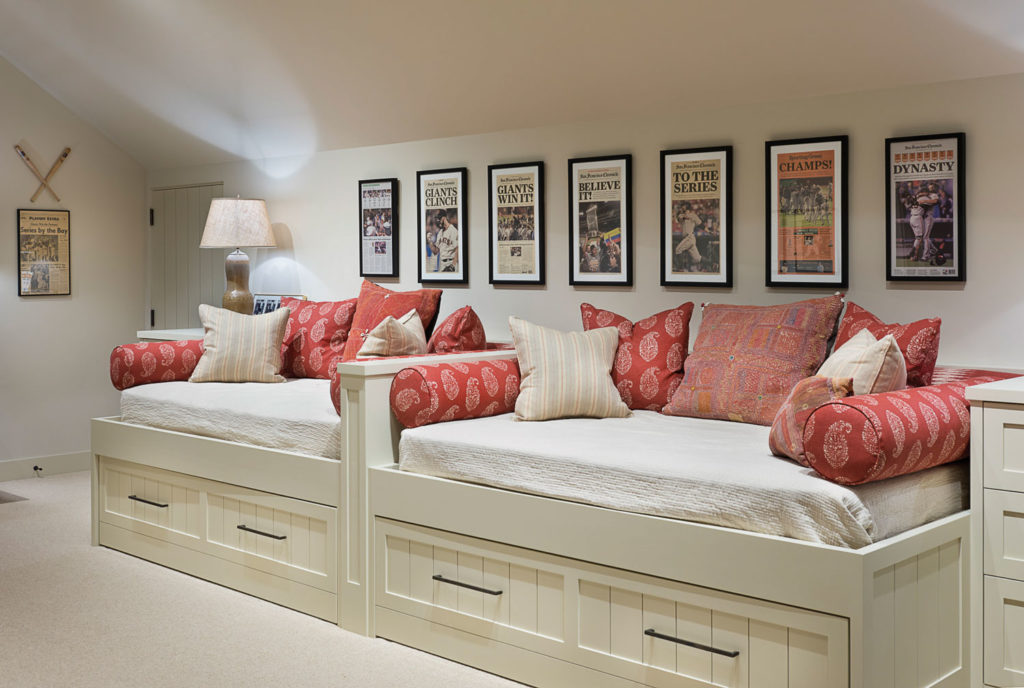 Built-in daybeds with the owners’ collection of framed San Francisco Giants posters offer an alternative to a bunk room vibe.

For the interiors, the wife and Breck worked closely together for a period of months, creating clean-lined, neutral-toned “roomscapes” that are simultaneously sophisticated and relaxed. A quieter palette with pops of color keep the focus on the outdoors, where it’s meant to be. The homeowners miss their talented friend, but appreciate the world they created: A home that celebrates the natural world, the passage of time, and their place in it. 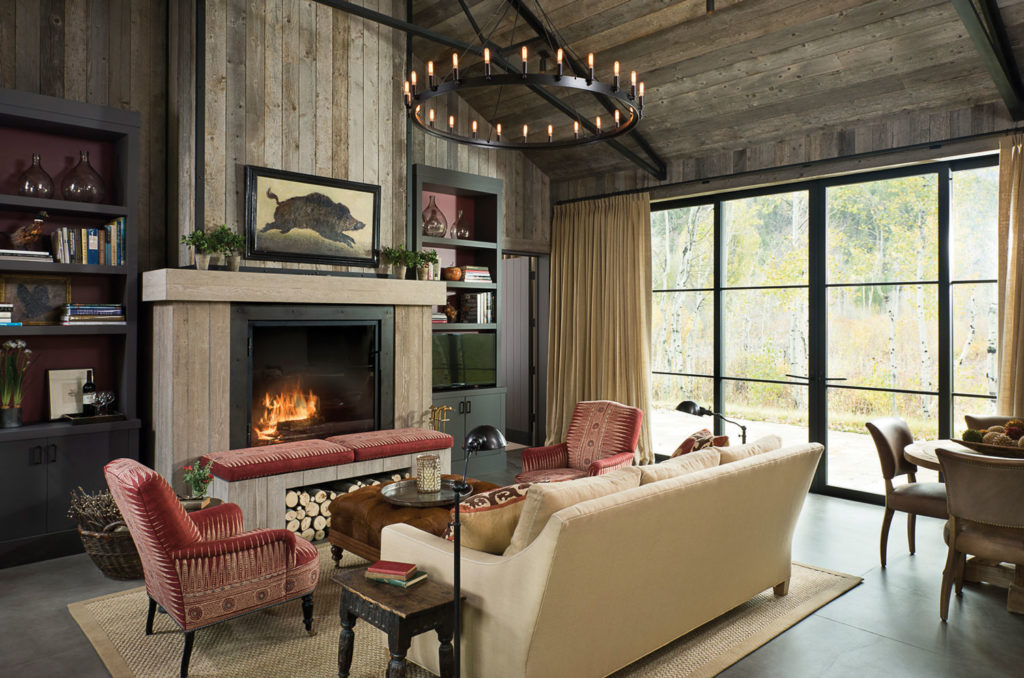 The guest house fireplace is made of board-formed concrete, and the furniture is custom. 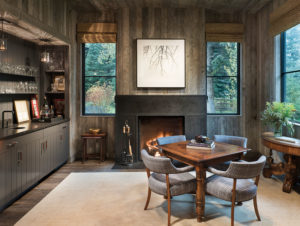 A cozy den is highly functional with a fireplace, built-in cabinetry, a wet bar, and a card table for spirited game playing during inclement weather. 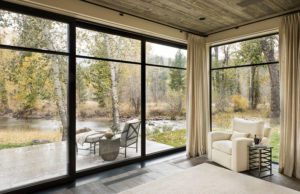 The master bedroom, with a pavilion-like feel, was reconstructed on the site of the original home. The architect and owners decided on a glass corner so they could fully appreciate the ripples on that section of the Big Wood River.