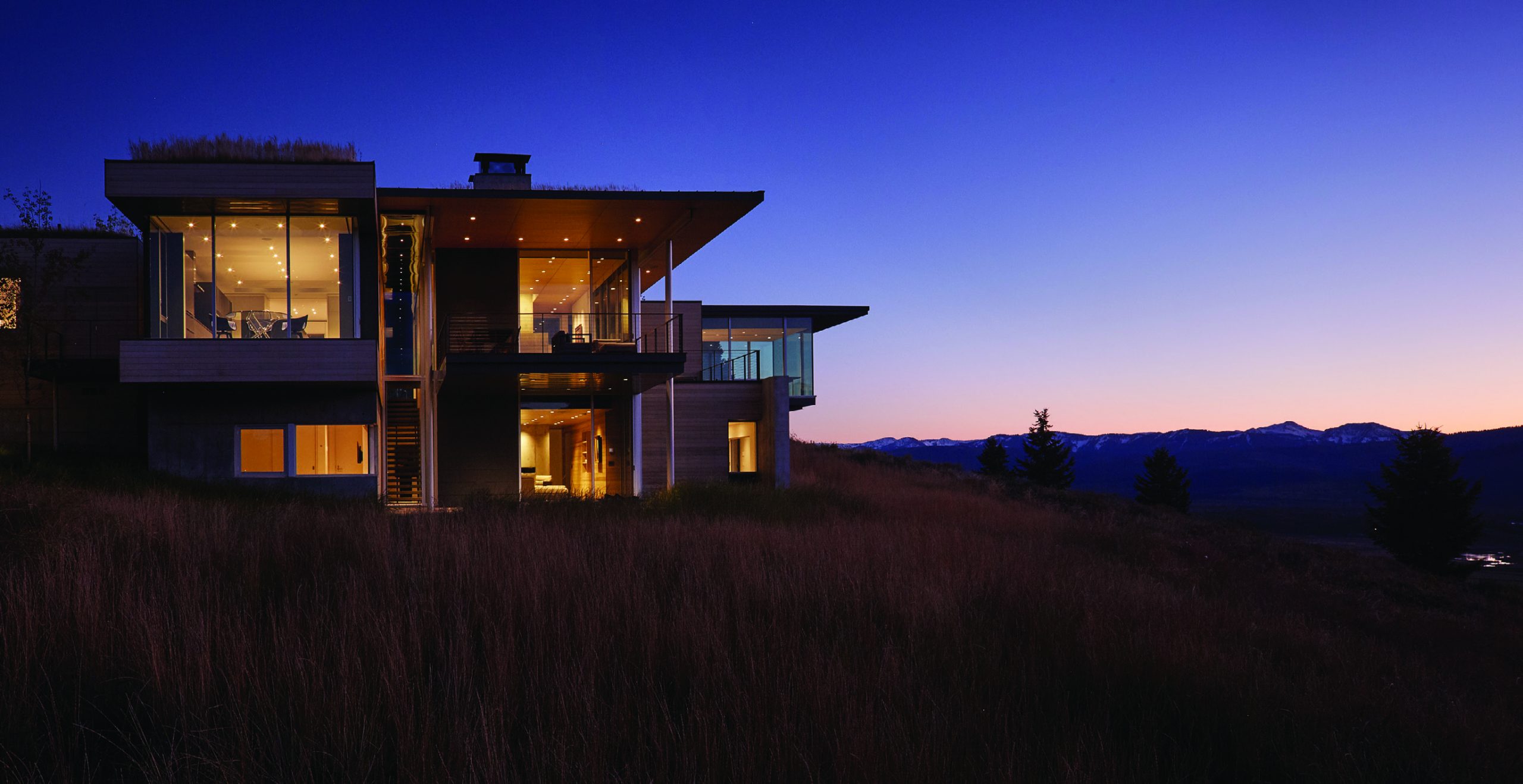 Architects at Bohlin Cywinski Jackson designed this 10,500-square-foot home near Jackson Hole, Wyoming, to maximize the views of the Teton Mountains, while the living roof of wildflowers and native grasses helps to camouflage the structure.

02 Jun Western Design: The Art of the View

While researching the possibility of building a sleek and modern home in Jackson Hole, Wyoming, a retired couple went to lunch at a Chicago restaurant with two design principals from Bohlin Cywinski Jackson. Architect Peter Bohlin had already spent time at the couple’s home in Lake Forest, Illinois, soaking up their living style and their taste in art and interior decor. But it was the steep-sloped, 5.5-acre site that overlooked the Grand Tetons — one the couple had owned for 30 years while dreaming about building a retreat from their careers on Wall Street — that made the biggest impression. Bohlin and fellow architect Ray Calabro spent hours walking it, studying its vistas, flora, and fauna. 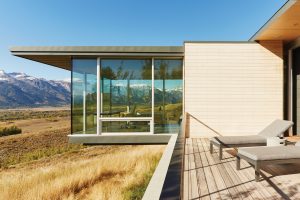 The homeowner’s office is perched over a sagebrush meadow with glass on three sides for a floating effect.

As the foursome discussed potential designs at lunch that day, Bohlin began to sketch on a paper tablecloth. “As it turns out, it wasn’t far from the house we actually built,” the wife says. “And he took that tablecloth with him.”

Bohlin called it a “slithering house,” the wife recalls, and for good reason: Looking down from the top of the site, it’s inserted into the slope, seamlessly integrating itself into the landscape. “We thought we’d build further up, but he came up with the idea of building into the hillside,” the wife says. “You can’t see it, because it has grass on the roof.” 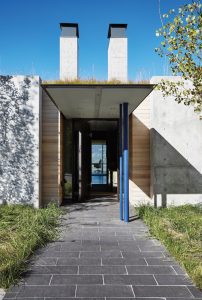 The architects’ objective was to design a modern home that fit in with the landscape and still had a feeling of warmth.

Strict building regulations in the Jackson Hole area limit views of new homes from a distant highway. “They ask you to test it by putting up scaffolding and vertical poles with flags on top to see where the roof would be,” Calabro says, adding that they designed a sloped driveway to help conceal the home. “The experience is one of approaching the house on a long, sinuous driveway. You enter at the high point and slowly descend to an entry courtyard.” 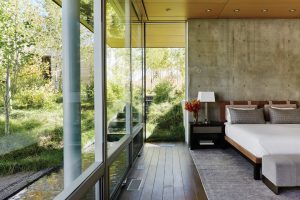 In the master suite, the Newport king-sized bed is from Troscan Design, the Lennox Side Table and Arakan Bench are from Holly Hunt, and the rug is from Ralph Lauren’s Safavieh collection. 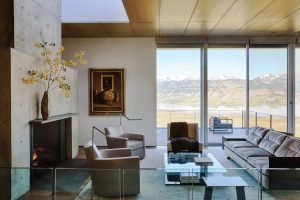 Interior designer Rush Jenkins, co-owner of WRJ Design in Jackson Hole, selected contemporary furniture and accessories in the living room to complement the architecture, including a Grandtorino Sofa from Poltrona Frau, a Mex modular glass table from Cassina, and a rug from Oscar Isberian Rugs.

As for the surrounding landscape, the architects preserved as much of an existing aspen grove as possible, so the drive to the 10,500-square-foot home and 1,000-square-foot guest house is through those trees, instead of beside them. “The leaves give off a magical sound when the wind blows, and they have gorgeous colors in the fall,” Calabro says.

Concrete walls frame the courtyard, reserving views of the Snake River Valley and the Teton Mountains for the floor-to-ceiling windows inside the house. The polished concrete was inspired by the clients’ love of architect Tadao Ando’s designs in Japan and the U.S. His work is not exactly an everyday sight in Jackson Hole, but that was no obstacle. 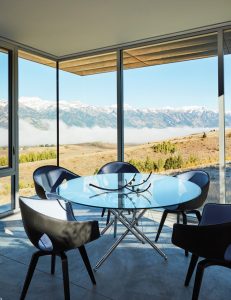 In the breakfast area off of the open kitchen, bisecting windows offer panoramic views. The 714 glass table from Cassina was designed by Theodore Waddell, and the Ginger Swivel Chairs are from Poltrona Frau.

“To get that smoothness, the concrete mason went to see Ando’s Modern Art Museum of Fort Worth,” the wife says.
Because the couple wanted the home built to the highest possible earthquake standards, the architects looked to Japan and California for guidance. “The steel I-beams are 30 inches deep,” Calabro says.

On the exterior, a weathered patina is developing on the western red cedar and zinc panels that edge the roof and cap the chimney. The living roof of wildflowers and native grasses camouflage the house from above while blending into the environment below. “It’s as maintenance-free as possible; it will weather naturally, and it will stand up well in snow,” Calabro says. 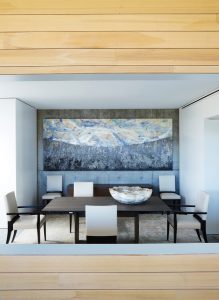 The dining room features a table by Rodam and chairs by Joseph Jeup. The artwork by Kyoko Ibe is made on washi paper, and was commissioned by WRJ Design.

Once the house was well underway, the clients called in Rush Jenkins co-owner of WRJ Design in Jackson Hole to work with the architects. His firm is known for deftly adapting contemporary design into Western living — and for this home, he merged both in spades.

Jenkins spends time at design shows in Paris, Milan, and London, and brings ideas and materials back to Wyoming. “We use clean lines that you see more in Europe than the U.S.,” he says. “And these clients are fans of quality fabrics, so we brought those into the interior, with cashmere, wools, and linen throws — and furs from Germany.” 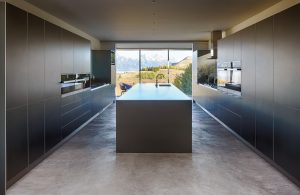 Some of the homeowners’ requirements included open spaces with views, clean lines, and no curved walls, illustrated here in the open kitchen.

The clients wanted the concrete, steel, and glass house to be livable and warm. “They entertain, but they wanted to be comfortable on a sofa, reading a book,” Jenkins says. Items from Italy contribute to tactile experiences, including handcrafted leather, among other textures. “We went to factories in Quarona, an hour and a half outside of Milan,” he says. “It’s known for textiles that are the highest quality in the world.” 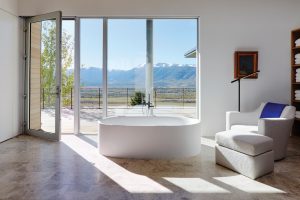 The master bath opens up to sweeping views of the Tetons, and the custom swivel chair and ottoman by Interior Crafts Inc. add a touch of comfort and luxury.

When they weren’t adapting European fabrics to this Western home, Jenkins and company were sourcing furnishings with form and function. “We wanted to bring out the aspects of the architecture, like the cantilevered glass piece in the living room and the glass rails separating that room from the rest of the house,” he says.

Back when the project was getting underway, Bohlin asked his clients for two lists: one was a list of their requirements and another of their desires. They thought it over, then handed the architect five pages for the first and three for the second. 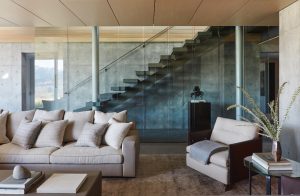 WRJ Design chose high-quality fabrics, such as cashmere, wool, and linen, to give the modern home a sense of warmth. The family room offers a comfortable place to gather, with a Massimosistema sectional sofa by Poltrona Frau.

“The first requirement was year-round living, then low maintenance, no small rooms, contemporary style, natural materials, and a home that was structured but informal,” the wife says. “Then, dramatic views, with open, voluminous spaces, good proportions, and no curved walls.”

The couple received all of that, thanks to the experienced pair of architects and some very gifted Jackson Hole designers and artisans who understood how to craft a sleek and modern masterpiece.