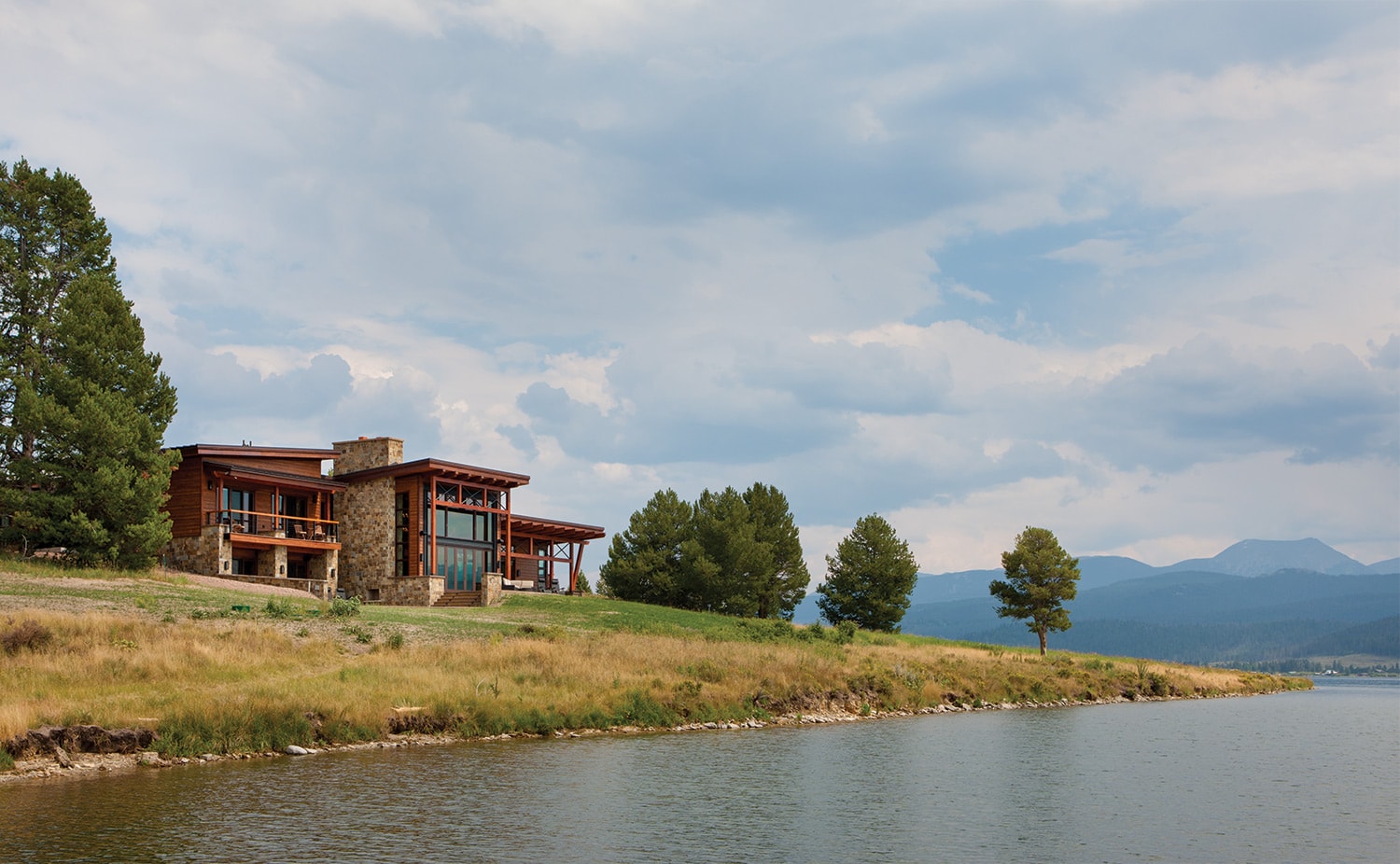 With floor-to-ceiling windows throughout the front of the home, Georgetown Lake views play the starring role.

Sometimes the best ideas start as simple conversations over a game of golf. That’s just what happened with Al Meitl as he played a casual 18 holes one Saturday morning in his hometown of Saint Louis, Missouri. His golf partner owned a house on Georgetown Lake in Western Montana, which Al had been out to visit numerous times. As it turned out, a nearby property on the lake had just gone on the market. 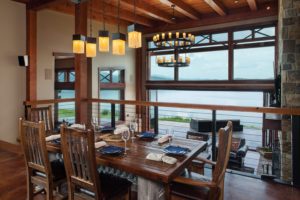 A full wall of French doors open to the patio, creating a seamless transition from indoors to out. 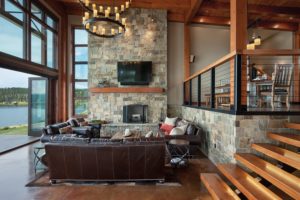 The living space cascades down toward the lake, drawing guests through the home and into the backyard.

“He said, ‘Hey, you ought to buy it,’” recalls Al. “It was just after 2008, so everything else was down but real estate was still strong, and it sounded like a good deal.”

Al purchased the lot and then sat on it for several years while he and his wife, Traci, thought about what kind of home they’d like to build. But before they could do even that, Al had to convince Traci that a house in Montana was a good idea in the first place.

“Originally, I was a little scared of Montana,” Traci admits, “with all the cold and snow and all that.” While they both are from the Midwest, and Al had made several trips to Montana with friends, Traci had never been to the state. However, it didn’t take long before she fell in love. “It has offered everything you could think of,” she says, listing off four-wheeling, fishing, boating, hiking, and watching the wildlife that frequents the lake. “It’s so beautiful and peaceful and calm, and so special.” 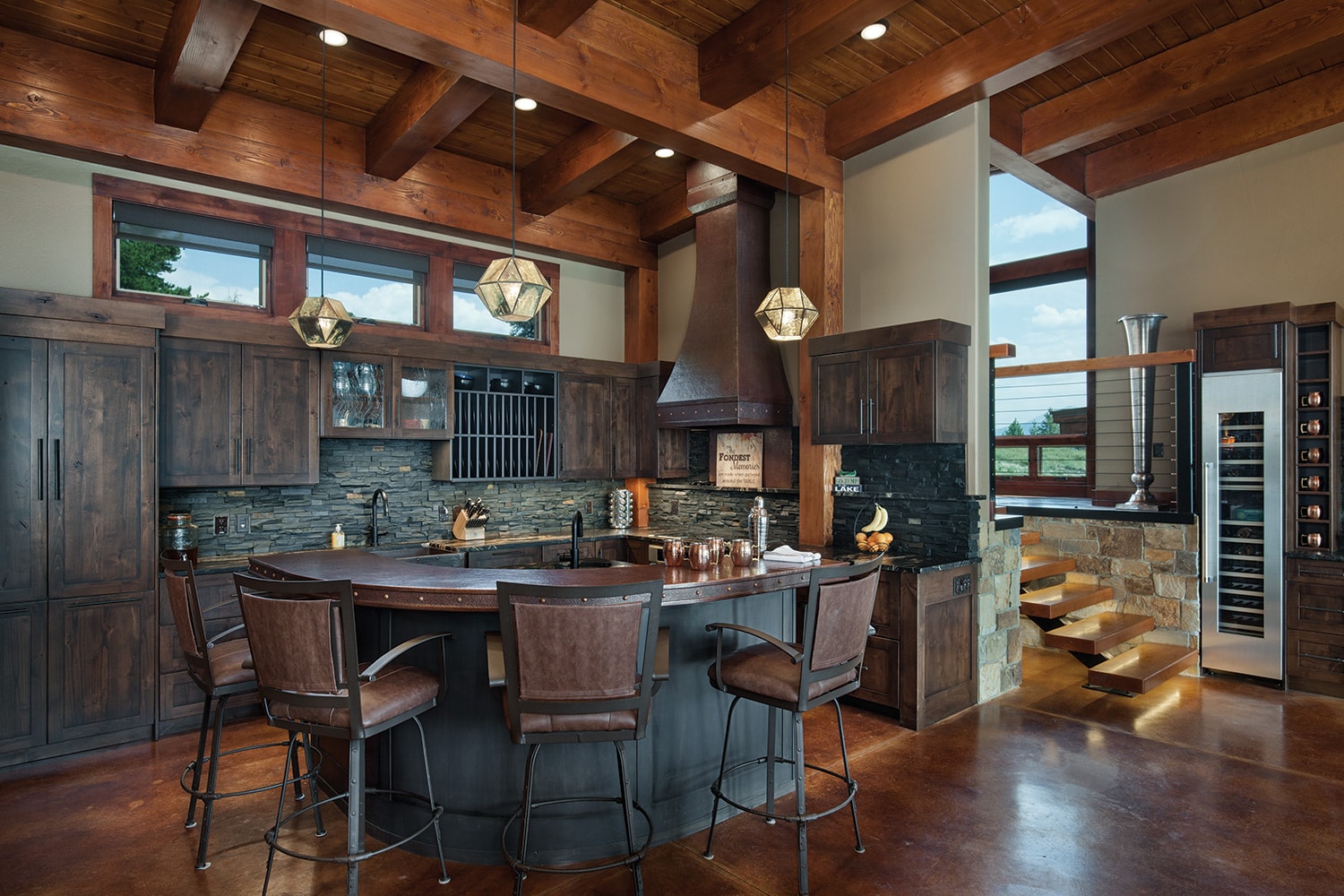 Dark, rustic cabinetry is brightened up by cleverly placed windows and modern design elements, such as floating stairs.

When they finally got down to designing their home, the Meitls wanted to make sure it reflected those attributes: peacefulness, coziness, with an emphasis on the natural beauty surrounding them. “We wanted to keep it homey and comfortable and warm, and also wanted plenty of windows to take advantage of the views,” Traci says. While combining these two goals could have been tricky, the constraints of their lot actually played a role in making it possible. 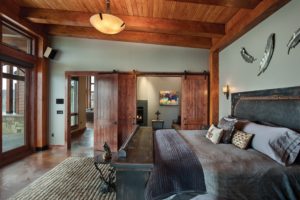 Even the master bedroom boasts large windows, offering views of the water and frequent wildlife sightings. 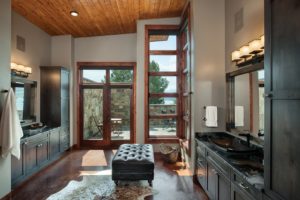 The homeowners recall that the process of building a home — especially the details like selecting cabinet hardware and lighting fixtures — was challenging, but entirely worth it in the end.

“We had a 20-foot grade change across the lot, so we knew we’d have to incorporate that,” Al says. “We dug back into the hill and made it a low profile in the front, but plenty open in the back. It’s really unassuming from the front, and in the back, every room has all these windows so it never feels closed in.” The long, lean, multilevel home nestles snuggly into the land, right along the shore.

Matt Franklin, an architect with M.T.N Design, the in-house design firm for PrecisionCraft Log & Timber Homes, concurs that the terrain provided the framework for the home’s unique design. “What’s cool about this house is that you come in the entry, and the house falls away from you below. Typically you come in a home and you’re looking up, whereas this space drops toward the lake and pulls your eye out there.”

They made the most of the lakefront orientation: floor-to-ceiling windows grace nearly every room, and massive bifold glass doors open onto the patio from both the living room and the master bedroom. “You’re effectively bringing that outside element in, and combining the two spaces,” says Jeff Vachal, project manager at PrecisionCraft. The couple says they love using this indoor-outdoor space, especially in the summer. Although, Al adds, “I’m not too sure about having a deer or moose walk into the master bedroom!” Which sounds unlikely until he mentions that their security cameras have picked up moose peering curiously through the windows. 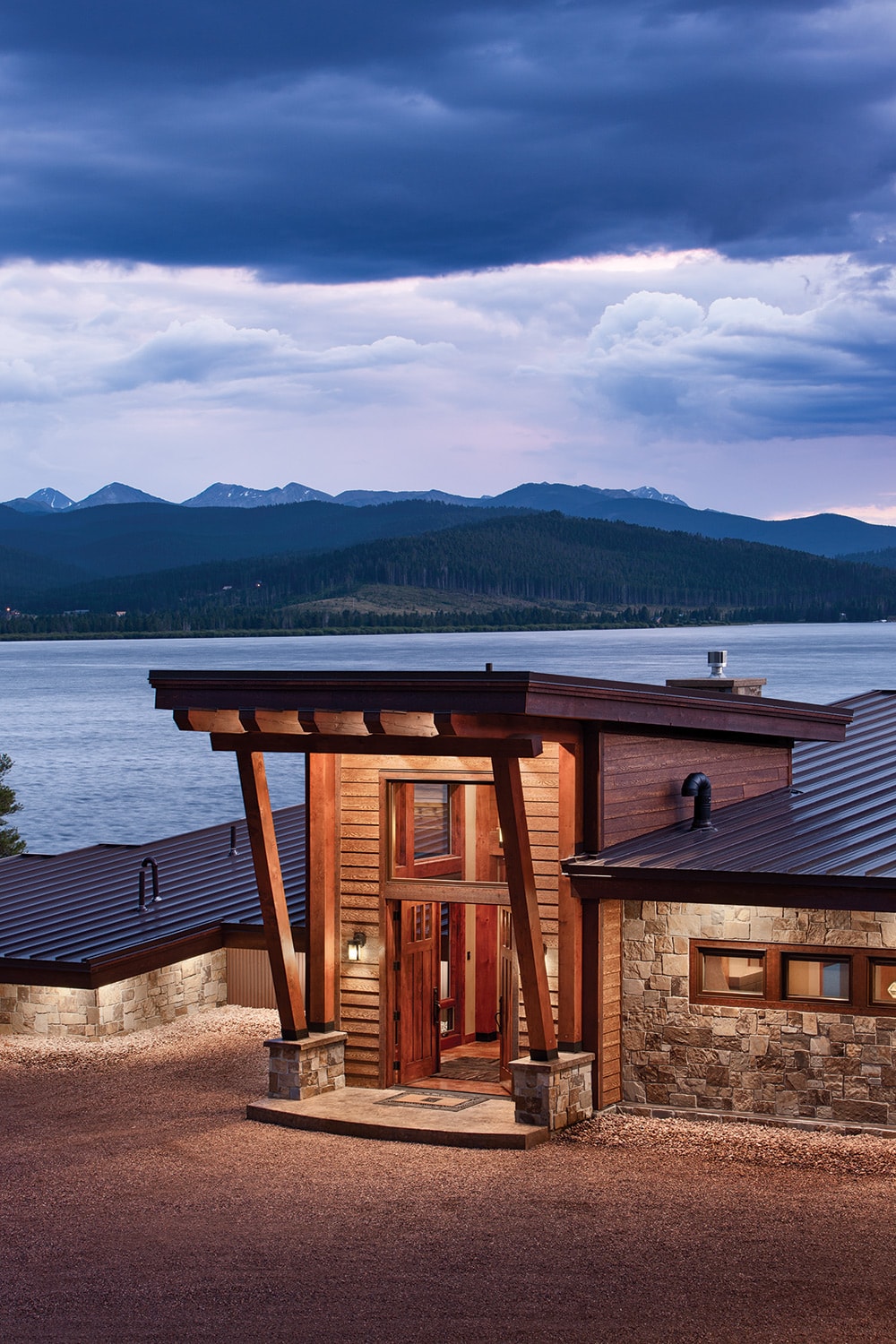 With the exception of the stately entrance, the front of the home is subtle, blending into the hillside.

Inquisitive fauna aside, the windows provide a secondary benefit in addition to the spectacular views. “All the south-facing glazing plays nicely into passive solar,” says Vachal. Because this is a vacation home for the Meitls, it had to be highly efficient and easy to control from a distance. “The timber frame, the various levels, the high-end mechanical systems, the SIPs [Structural Insulated Panel] enclosure, the radiant floor heat, the passive solar all work together to make it an extremely high-performing, energy-efficient home,” he says.

“When we’re gone during the winter, we’ll set the thermostat at 52 degrees,” Al says. “But when we check the temperature, if the sun’s out, it’s consistently above that.” This means heating bills remain comfortably low.

But as it turns out, long-distance monitoring during the winter may not be as necessary as they originally thought: Turns out the Meitls — even Traci — enjoy Montana in the cold months just as much as in the summer ones. “Throughout the process, they were debating whether it would be a year-round home,” recalls Vachal. “As they realized more and more how accessible it is, it’s turned into a true four-season home.”

“We were there for Christmas and New Year’s, and it added so much to the holiday experience,” says Traci. “Going out in the snow, finding a Christmas tree, experiencing those things together at this house. It’s been a neat culmination of the process, to be building those new memories here.”