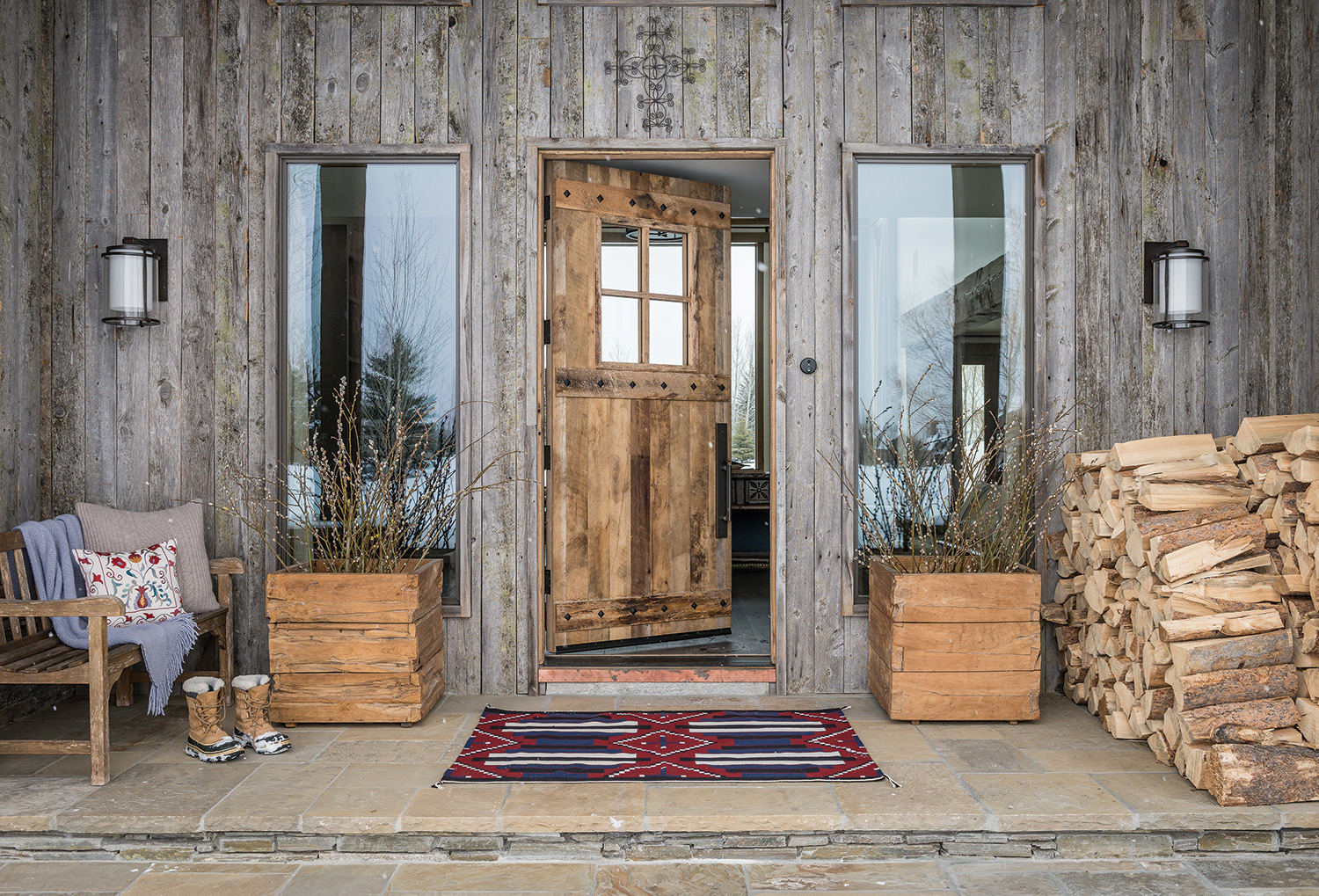 When a Bay Area family decided on Jackson Hole, Wyoming, as the location for their second home, they initially chose to live on a ranch. “We knew we wanted to be near a world-class ski mountain, and also have some kind of town where we could spend the summers. We settled on Jackson Hole, and we just loved it,” the wife says. But eventually, with four kids in tow from the ages of 4 to 10, they realized maintaining a property that large was just too much work. “We wanted a house closer to town,” she says. 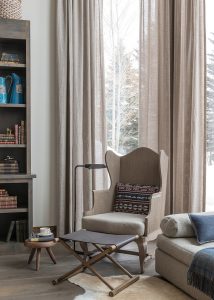 A corner of the living room is set up as an intimate sitting area with a wingback chair from Restoration Hardware, a floor lamp from Visual Comfort, and a stool from Cassina.

One day during their search, the couple pulled up to a ‘90s-style rustic home in a neighborhood close to nearby Wilson, Wyoming. The wife almost didn’t step out of the car. “My husband had looked at it first and brought me back, but when we drove up to it, I didn’t even need to go inside,” she says. “I just didn’t think this was the house.” But once she was persuaded, the couple — who had been through three other remodels together — started brainstorming. “We realized the bones were pretty good,” she says. “We needed to move walls around and it needed to be updated, but it was a good house and location.”

They bought the house in the summer of 2015, and brought in Jackson Hole-based designers WRJ Design and builders Shaw Construction with every intention of doing a straightforward remodel — that is, until they dug in and uncovered some serious structural issues. “The challenge of the remodel is always, how far do you go?” says Chase Beninga, owner of Shaw Construction. “At the point where we found the structural issues, we paused the project while we did a cost analysis and worked as a team to come up with a design to fix those issues.”

The situation not only upped the budget, but it also opened the door to making significant changes, meaning that the homeowners had more latitude to pick and choose design options. “Then we took it to a new level,” Beninga says. “We tore the center core of the home down and built it back up. Basically, it’s a brand-new home at this point.” 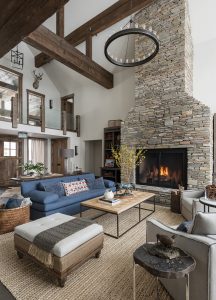 The great room, with cathedral ceilings, is centered around the fireplace with an Owen sofa and Duke swivel chairs from Verellen, a deconstructed upholstered ottoman from Restoration Hardware, a chandelier from Visual Comfort, and custom draperies by Rogers & Goffigon.

Integral to the project was the team at WRJ. Known for their interior design work and showroom in downtown Jackson, they also managed the spacial design of the home, a facet that’s incorporated into many of their projects. “Part of the reason is that we want to create a holistic environment that is more harmonious, and has a sense of continuity and tranquility throughout the residence,” says Rush Jenkins, WRJ design principal and co-owner who designed the home with WRJ design director Nida Zgjani. “If we design spaces and all furnishings, we are able to create a harmony that resonates with many clients.”

Since they were essentially starting over — although using the same footprint — they were able to make important adjustments, like reconfiguring the entire master wing, folding the square footage of a stairwell into a large bunk room, and redesigning the great room window to take advantage of Grand Teton views. “Essentially it was like building a new house,” says Jenkins. “There’s new electric, plumbing, every window was replaced, along with the timber work and the flooring. We brought in an architect to help with initial engineering components, and we took over all aesthetic choices and elevations.”

WRJ selected current materials to use throughout the home, with white carrera marble in the bathrooms, reclaimed wood for the floors and beams, glass panels between the stairwell posts, and quartzite for the kitchen counters. They selected all of the plumbing fixtures, kitchen appliances, and most of the furnishings, artwork, and design accessories. “They had a selection of antiques, books, picture frames, and furniture shipped out, and they wanted us to hang every piece and select the new pieces,” Jenkins adds.

Outdoor spaces also were transformed. With the help of Jackson Hole-based Agrostis Inc., the pond in the large, landscaped backyard was enhanced for swimming with the addition of a dock. 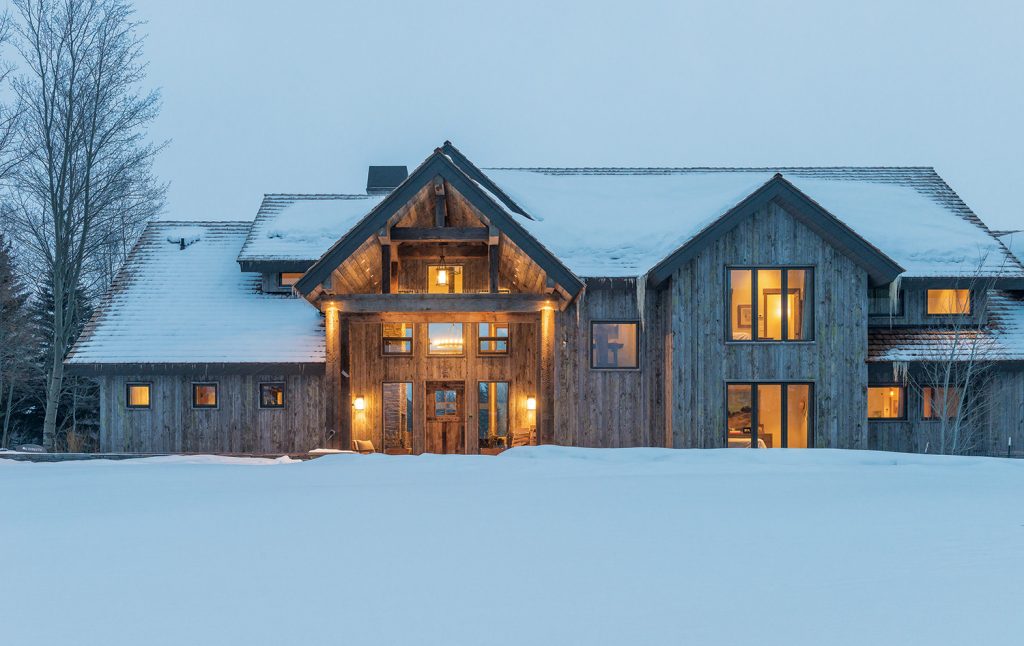 Although the home kept the original footprint, not much else remained the same. “Basically it’s a brand new home at this point,” says Chase Beninga of Shaw Construction.

The end result is a Mountain Modern home with traditional touches, and a comfortable place to accommodate four kids. “It worked out perfectly,” the wife says. “WRJ pushed us just enough so we didn’t get the regular log cabin-looking home, but not so much that we got something we didn’t like.” In fact, the family liked it so much that they recently made it their primary residence. 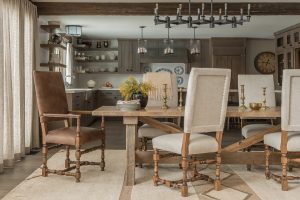 The kitchen opens to a dining room that features a table custom designed by WRJ, along with chairs from Restoration Hardware.

Even though the project went from remodel to total transformation, Shaw Construction and WRJ were able to pull it off in time for the family to move in less than a year later. “Getting with a design-and-build team that can pull that out of the existing home is pretty unique,” Beninga says. “It’s important to have a team with the vision of how the transformation will take place, who can then communicate that vision to the owner. It really worked out well.” 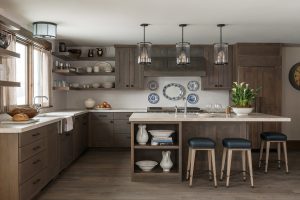 The kitchen features an island for casual dining, with stools from Hickory Chair. 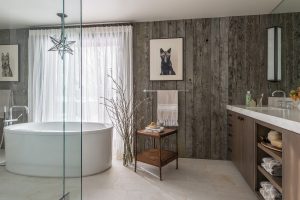 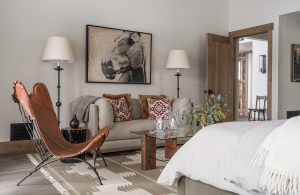 The master bedroom includes a sitting area with artwork by Kenneth Peloke from the Jackson Hole-based Rare Gallery, a Ralph Lauren rug, and a safari camp chair from E.J. Victor.