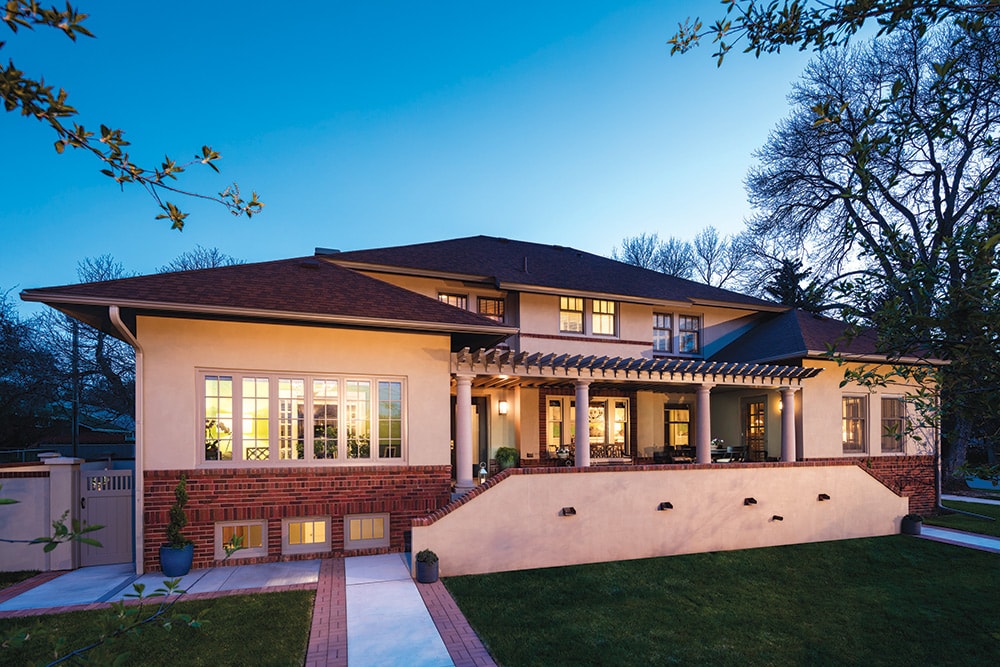 The 6,000-square-foot stucco home was built by one of the community’s founding fathers in 1917. Original blueprints guided the reconstruction of the front stoop and pergola.

Just about everyone in the town of Lewistown, Montana, population 5,800, knew about the 6,000-square-foot stucco home just off Main Street. If not for the structure’s rich history — it was built by one of the town’s founding fathers in 1917, converted into nine upscale apartments for genteel ladies and gentlemen, went back to the bank, and was in the process of being turned back into a single family home — then they knew it for the bad state it was in when Greg Clark and Frank Valach purchased it in 2014.

“Greg called me after they bought the house and said they bought the ugliest house in town,” laughs Bella Cucina West owner Jeana Morrison-Noel, who helped them design the kitchen and bathrooms. “Everybody was appalled, really, it was in such disrepair.”

Even Clark and Valach were mildly appalled when they first laid eyes on it, noticing a “for sale” sign in the yard.

“I said to Frank, ‘That’s the ugliest house in Lewistown. Who would ever take on a dump like that?’” Clark recalls. Right after those words escaped Clark’s mouth, the owner poked his head out and asked if they’d like to see it. The rest is history.

Valach was born and raised in Lewistown, but the couple had most recently been living in Clark’s hometown of New York City. “I first visited 23 years ago, and I just fell in love with that part of Central Montana,” Clark says. After many more visits, they bought a condo in Lewistown in 2006 to test it out as a retirement location. It passed, and while Clark was between jobs, they started looking for a house with their eye on a grand Victorian downtown. That house sold before they could see it, and that’s the same day they stumbled upon their destiny.

“Certain things struck us: the scale of the rooms, the staircase, the structure,” Clark says. “We just kept coming back to this house.”

They made an offer and embarked on a three-year journey to renovate it. “The house had been neglected for so long that many felt we were insane — I think they were right,” Clark jokes. “Initially the challenge was if we would find local talent to do the work, and it was very important to us that we spend our money in Lewistown and reinvest in the community.”

They hired Bill Higgins of Heartland Construction as the general contractor, a local builder who has since relocated to Helena. And they tapped Morrison-Noel to help design the kitchen and bathrooms. But with a large home like this, one that needed a complete facelift, where do you start?

They started with the kitchen, which had been cut in half due to the apartment layout, with a servant’s stairway in the back. “It was a really important room, and it was going to get expanded, so it was a place we could start,” Higgins explains. “Remodeling is a work in progress. You start by getting it reconfigured and then leave that part to be wired and replumbed at the end.” Therefore, any rooms that were reconfigured were tackled first.

Morrison-Noel, who designed luxury kitchens in Florida before moving to Montana, was a crucial part of the team. Not only did she have to choose the kitchen flooring, counters, cabinets, and fixtures, she had to solve a unique storage dilemma: Clark is a collector of — and an authority on — antique glass china.

“When I met them he had 72 sets, each with place settings for eight to 12 people, including glassware,” she says. “They are very formal entertainers, with pressed linen napkins from France, silver, hors d’oeuvres in the living room. It’s really the old art of entertaining, and they really use these sets of china.”

Morrison-Noel came up with “The Great Wall of China,” a 9-1/2-foot wall of floor-to-ceiling cabinets with a glass front and a rolling library ladder for easy access.

They modernized the main floor master bedroom (which lies adjacent to the kitchen), and reconfigured two closets to add more space to the master bath. They also completely updated the upstairs bathroom, along with two master suites, each with a sitting room and walk-in closet. Clark has an office on the second floor as well.

A good way into the project, the question of replacing the original windows arose — all 55 of them. After careful consideration of both the cost and effort involved, the homeowners decided to take that plunge. And when Higgins moved to Helena, local master carpenter Mike Wichman and his son, Tahan, took over.

After three years of work, keeping part of the home’s history alive and updating other areas to suit their more modern lifestyle, Clark and Valach transformed the home into something spectacular and completely their own. “It’s a mix of modern and traditional, also highlighting our personal lives,” Clark says. A mural in the dining room, for instance, created by Clark’s best friend from Connecticut, Tina Baranet, depicts all the mountains that surround Lewistown against the big sky. “It’s an homage to traditional landscape wallpaper, but we wanted it to feel Mid-century Modern and a little Asian,” he adds.

Clark has since started working in New York City again, but the couple spends as much time as they can in their new home — Frank spends a good part of the year there — and they relish having guests join them.

“A very dear friend got out of the car and said, ‘What do you do here?’ By the time she left she was in love,” Clark says. “Everyone falls in love with Montana, with Lewistown, and with the house. It was an act of love or an act of insanity — it was like a Pandora’s Box — but it’s an expression of our lives. We’ve lived all over the country, traveled all over the world, and it’s the final amalgam of our collected experiences.”