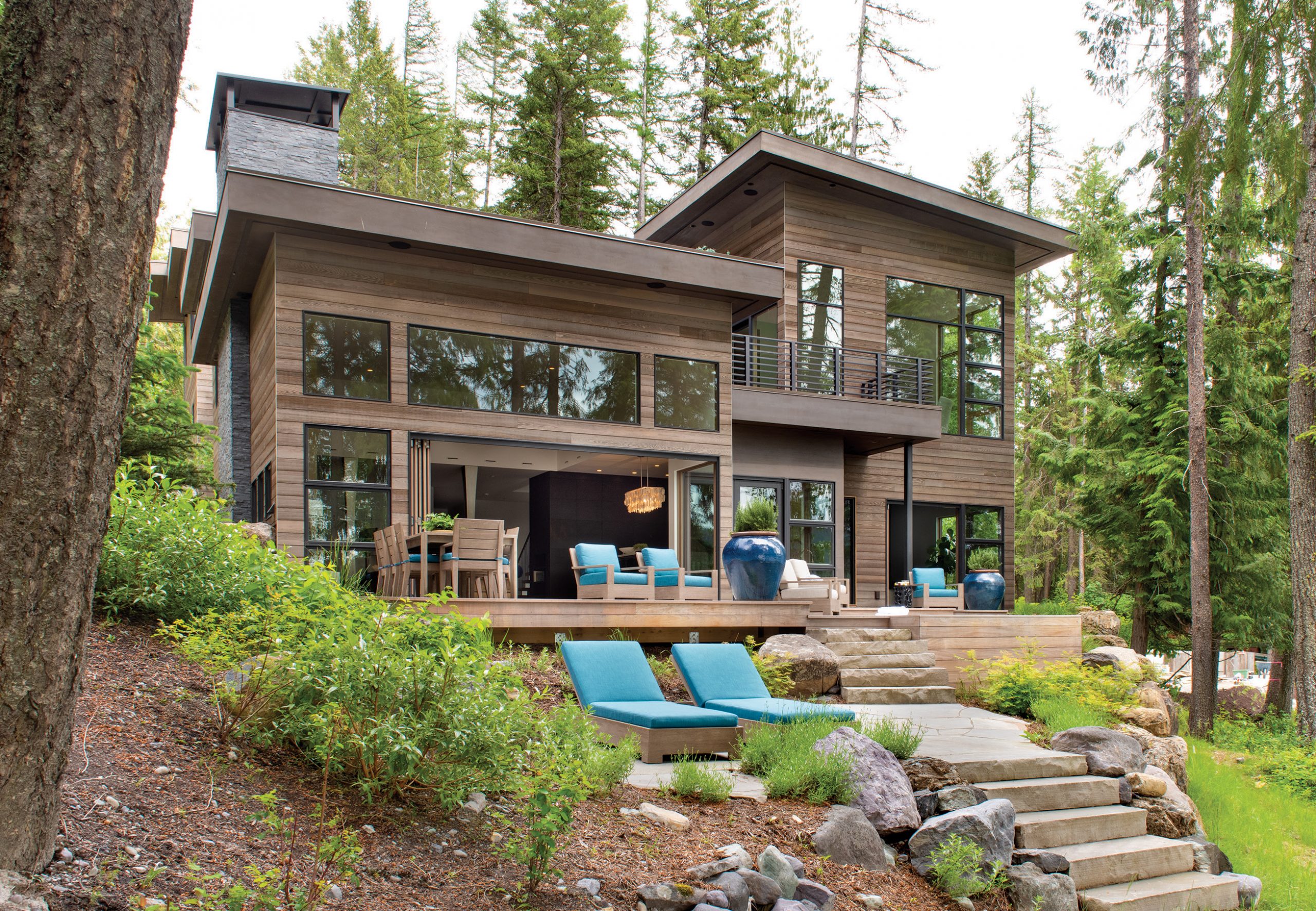 This home in Whitefish, Montana, designed by Stillwater Architecture, is tucked amongst the trees and positioned to look down the length of the lake.

04 Feb Western Design: On the Waterfront

With a laid-back vibe and the outdoor recreation that abounds in this Western Montana mountain town, Whitefish is a sure bet for families. “It’s a great community with a small-town feel,” says architect Robert Gilbert of the Boulder, Colorado-based Stillwater Architecture. “Everyone knows everyone; on the ski hill you run into all your friends.”

Along with the skiing at Whitefish Mountain Resort, the 6-mile-long Whitefish Lake — pristine and ringed by mountains — has been a draw for second homeowners from both coasts. Its popularity, however, means that lakeside frontage is limited, with most available properties already built upon. 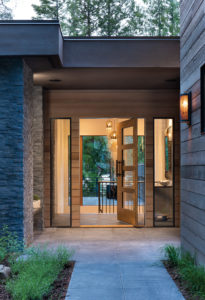 When a regular visitor to the area decided she wanted to live in Whitefish for part of the year, she was lucky to find two adjacent waterfront lots. Both had existing older homes that were somewhat rundown and poorly sited, with little connection to the lake. Stillwater Architecture was tasked with designing two new homes, with the goal of making the best use of each site: respecting existing trees, establishing a strong relationship to the water, and protecting the views. To ensure that each structure would be as distinct from the other as possible, Gilbert designed the owner’s home, while his partner, Michael Donohue, designed the one next door.

The long, narrow parcel offers a wooded approach to the house, allowing for a driveway to meander organically then split while descending down to the lake. There, mature conifers minimize the mass of both buildings, helping to integrate them into their respective sites. 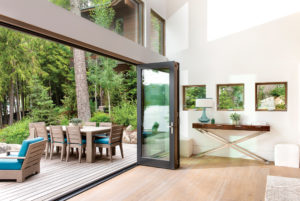 On the lake side, walls slide away for seamless indoor-outdoor integration.

The owner knew she wanted a contemporary-leaning design that faced down toward the length of the lake, with a strong indoor-outdoor ethos and a sense of privacy despite the proximity of neighboring homes. The result is a two-level home with clean lines, clad in cedar to blend with the forested hillside. Rather than going with the red cedar that’s commonly used in the region, the architect chose wood tones to match the bark on the surrounding trees and the natural ground cover. “We didn’t want it to fight with the site,” Gilbert explains.

The structure is conceived in two main volumes of different heights, with a second-floor balcony jutting out between them and projecting toward the lake. An attached garage hosts a guest suite with its own kitchen, and large fascias of plaster in neutral tones tie the various volumes together, while sloping roof lines and multiple patios step down toward the lake to inject energy into the design. Stone details create a sense of groundedness and connection to the site, while touches of steel lend a contemporary edge. 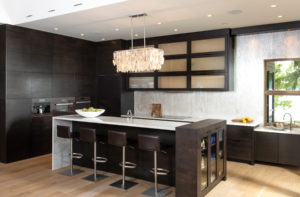 The German-inspired kitchen, influenced by the owner’s time spent in Europe, is sleek and monolithic with dark cabinets and waterfall countertops. Hunter Dominick, of Hunter & Company Interior Design, chose the crystal and shell island pendant from their Whitefish-based showroom.

The interior, says Gilbert, “is very personal to the owner. She wanted a peaceful, clean, serene house — one that is light, bright, and airy and reflects her personal taste.” As a result, the spaces are uncluttered, with little ornamentation. The owner’s passion is entertaining, thus she asked for multiple gathering places, along with flex spaces that could be used in different ways (such as the study that can double as a bedroom). Together, the team worked to create places for quiet, private moments throughout the home, providing opportunities for retreat from the bustle of a full house. 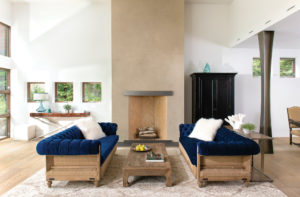 The vertical Rumford-style fireplace with herringbone brick is designed to project heat into the oak-floored great room.

The owner, who has spent a significant amount of time in Europe and lived in London for a stint, used that influence to create a modern Germanesque kitchen, with dark cabinets and a waterfall marble island countertop employing a clean, monolithic aesthetic that’s also displayed in the Rumford-style fireplace, the light woods, and the Scandinavian color palette found throughout the house. Large expanses of windows, opposing glass walls at the entryways, and a floating staircase create a feeling of openness and integration into nature, while the master bedroom’s floor-to-ceiling windows and jutting balcony produce a treehouse feel.

“The site drove a lot of the decisions,” explains interior designer Hunter Dominick of Hunter & Company Interior Design. “The owner knew she wanted a mountain modern aesthetic. For instance, there are no casements around the windows in order to accentuate the views. The house was designed for entertaining, mainly in the summer months. The idea was to have a lot of livable space on the exterior, with a shower, hot tub, and dining area outside.” 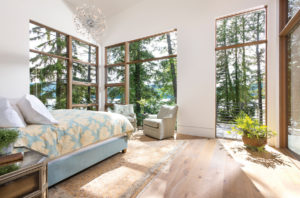 The large corner windows allow the second-floor master bedroom to
be immersed in nature. 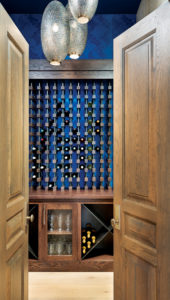 In the intimate wine room, the cobalt wallpaper from Designers. Guild anchors the space. The Cairo pendants are from Hunter & Company Home.

Indoor/outdoor transitions were carefully thought through. A free-floating granite bench that sits at the main entry is duplicated right inside, tying the exterior and interior together. The custom front door is glass with horizontal metal flanked by textured stone and wood. The same materials continue inside, but the treatment changes, such as where the stone walkway transitions to a more refined herringbone pattern in the entry. This, says Dominick, “sets the tone for the whole house.”

The home has many unique touches, such as the custom-designed structural columns in the living room and a master bath that is clad entirely in Carrera marble with a stand-alone footed tub. In that inner sanctuary, says the designer, “She wanted something stylized but classic.” In terms of palette, Dominick says, the client favored watery colors: teals, blues, and greens to enhance the home’s place in nature.

Facing the south and oriented toward the long view of the lake, surrounded by mature trees and native landscaping, the home is anchored unobtrusively to its site. “It looks like it’s been there a long time,” notes the architect. 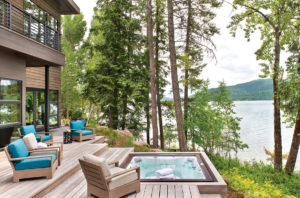 A hot tub looks out to views of Whitefish Lake.

Heidi Long travels the Rocky Mountains as an architectural and food photographer. Her work appears in national and regional magazines, such as Mountain Living, Cabin Living, Western Art & Architecture, and Timber Home Living. She lives in Kalispell, Montana, with her two sons.