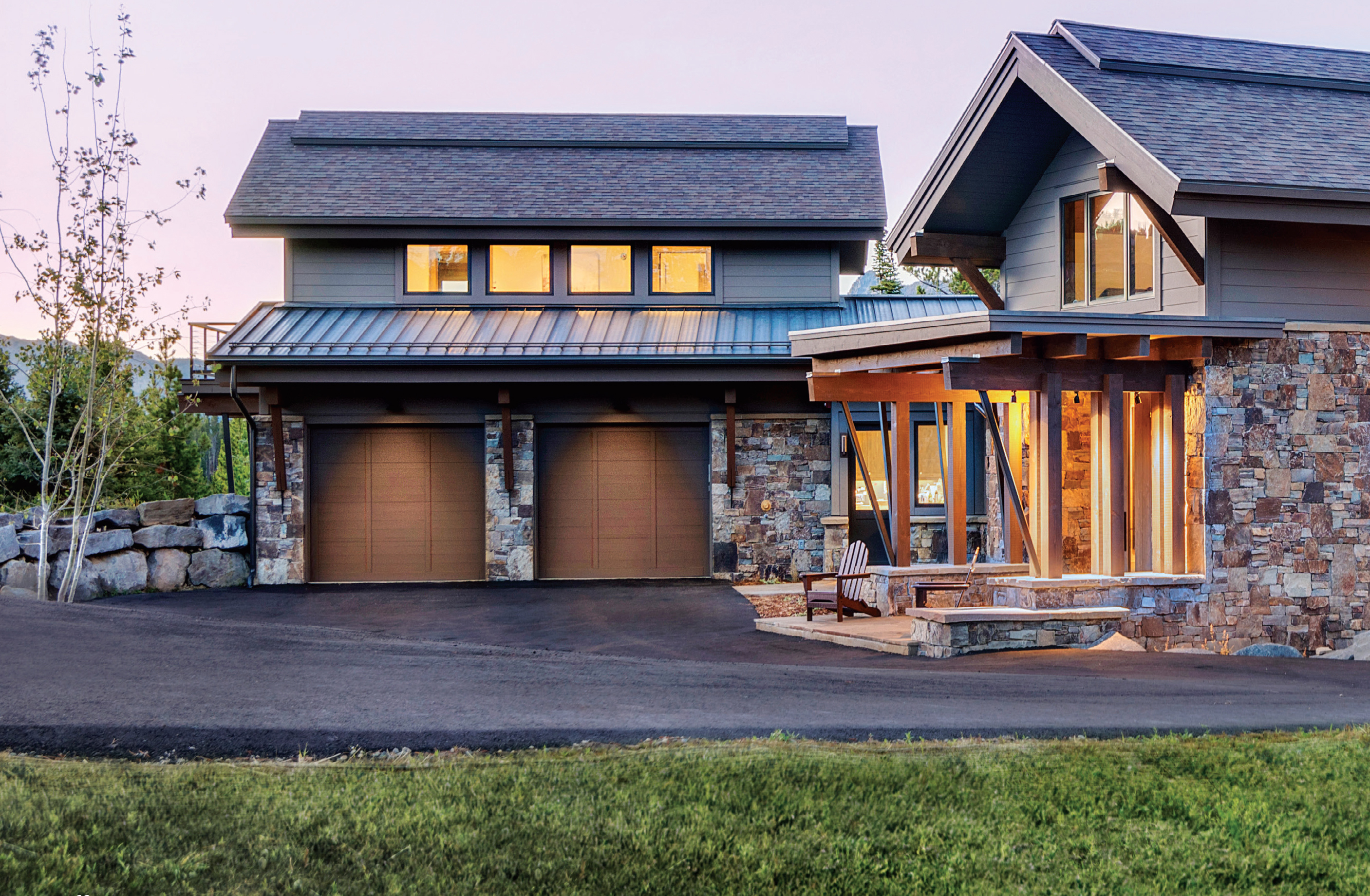 For a Texas family’s dream home in Big Sky, Montana’s Moonlight Basin, the two-level structure was sited to take advantage of the extraordinary views. On cool evenings, the family gathers around the fireplace under the partially covered outdoor living space.

It was 2004 when Debbie Canby’s husband, Robert, suggested Montana for a vacation. “I said, ‘Why would I want to go to Montana? I’m a city girl,” she recalls. Nevertheless, she agreed to a trip, and that August they vacationed in Big Sky. The whole family immediately fell under its spell. The flowers were blooming, the mountain setting was glorious, and the climate provided a dramatic contrast to their life in Texas. A few months later, they purchased a condominium. 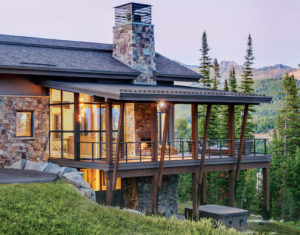 The great room, featuring cathedral-style ceilings, is oriented on the views, while the stone fireplace anchors the room. The homeowners sourced the juniper and copper coffee table from a local craftsman.

Montana quickly became much more than a second home for the Canby family. Avid skiers, they enrolled their two children in the local school one year, allowing them to experience a sense of community and build friendships in the small mountain town. However, as they spent more time there, and as the home increasingly became a getaway for their extended family over the holidays, they soon felt that they needed more space.

Reid Smith and Bob Brooks, of Reid Smith Architects, who were introduced to the couple by their contractor, Blue Ribbon Builders, remember meeting the Canbys for the first time at their condo. “They were hard-core skiers, and there was ski gear everywhere,” recalls Smith. “They were bursting at the seams.” 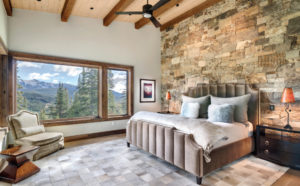 In the master bedroom, a hide rug and velvet headboard offer warmth and coziness while creating contrast to the rugged stone wall. 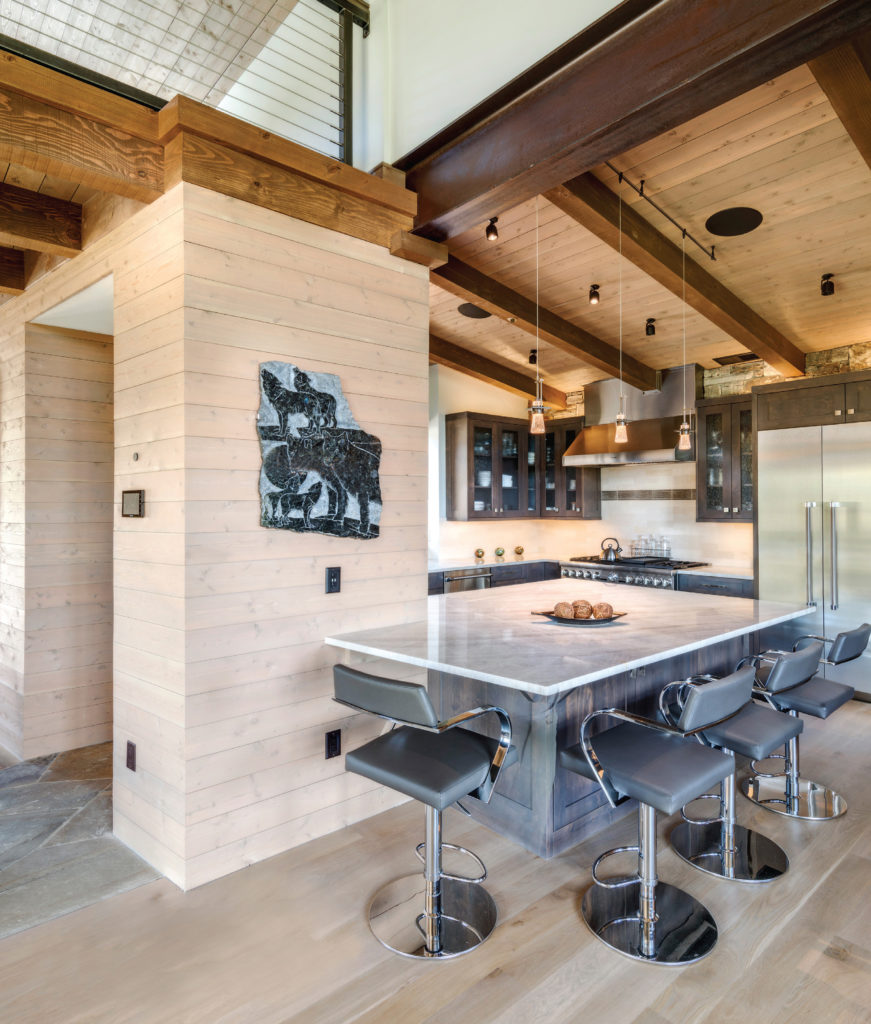 The family-friendly kitchen is open to the living areas, yet it’s given its own sense of space through the use of contrasting wood and a granite island countertop that creates a divider. The owners purchased the stone wolf etching at the Ann Arbor Art Fair.

The clients had purchased property in Big Sky’s Diamond Hitch area around the same time that they met and struck up a rapport with Doug and JoDean Bing, owners of Blue Ribbon Builders. Their lot is centrally located for access to all parts of Big Sky Ski Resort. “It’s at a high elevation with million-dollar views,” JoDean says. “It gives them lots of elbow room.” For a skiing family, adds Doug, it’s unbeatable. “It snows 10 months a year here,” he says. “You can step out the door, snap on skis, and ski down to the lift. At the end of the day, you ski down to the home and snap out of your skis. There’s no walking or crossing roads.” 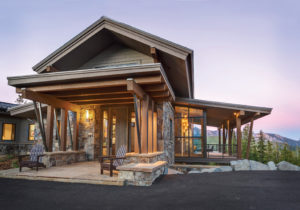 Reid Smith Architects used offset angles between the main house and garage structure, and also in a main wall inside the entryway. Vertical beams and angled steel supports add the same touch in the portico.

The property benefits from better solar exposure, crucial during the winter months, than their previous home, while also boasting dead-on views to the north, across the forested valley to the Spanish Peaks. “We like being able to overlook the ski area as well as the beauty of nature,” notes Canby. “From our condo, we could see Lone Peak but not the Spanish Peaks. Now we can see both, and we can see the ski area, including my son’s favorite, the Challenger Lift.”

The couple had undertaken building projects before and enjoyed the process, so much so that after retaining Reid Smith Architects, Canby decided to take on the interior design herself. “I’m an interior designer wannabe,” she says. “I love fabrics and colors and textures. I’m not trained, but I just love that aspect of building.” 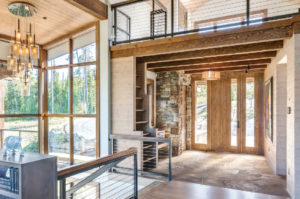 The collaborative nature of the project was put to use when figuring out how to access the loft above the foyer. Together, the homeowners, builders, and architects settled on a clever plan to build a staircase/ ladder that doubles as a set of shelves.

The clients also brought a sense of their preferred architectural style to the project. They envisioned a clean mountain-modern look before it was popular. It happened to be very much in sympathy with the aesthetic of the architects at Reid Smith, who favor a refined look, one that is strong on simple forms and clean edges. The clients also were somewhat ahead of their time in thinking about energy efficiency at altitude, according to the Bings. The home features a large amount of insulation and a geothermal-supported hydronic-heat system.

Douglas fir timbers, knee bracing, steel detailing, and stone elements define the home, which is perched at an elevation of 8,000 feet. From the approach, a striking glass volume projects out onto the deck toward the southeast, providing dramatic appeal and allowing a tremendous amount of light into the stairwell and lower level. The majority of the structure is spread out over two floors, with the entry opening into a vaulted great room that’s centered on an attention-grabbing view of Wilson Peak. A wrap-around deck offers a highly functional outdoor living space.

The kitchen and dining areas have lower ceilings that define the spaces and create a sense of coziness. That space opens to the larger great room, while the back-end views toward the Challenger Lift create a sense of connection to the ski mountain. Above the front door, a lofted reading nook is accessed by a clever bookshelf/ladder, the result of much creative back-and-forth between the homeowners, architects, and builders. The main level master suite also features prime views, and a staircase from the living area leads down to a ski room, family room, wet bar, bunkroom, and the utilities. 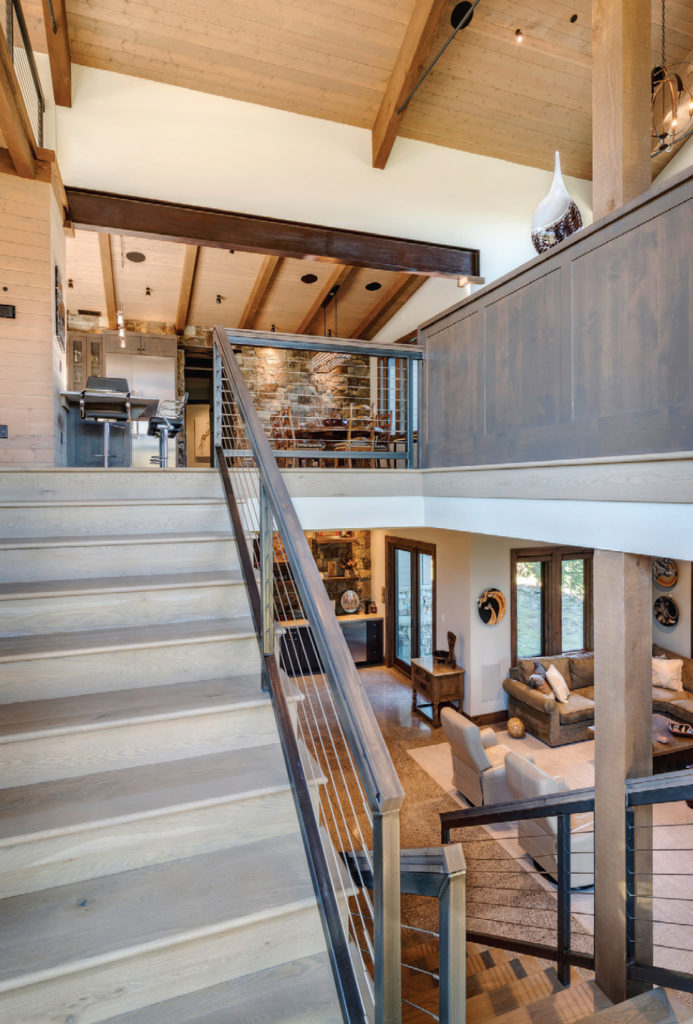 Thanks to the grade of the hill, the land slopes away, opening up to the views and offering plenty of light into the lower bedrooms. Meanwhile, skiers have direct access to the trails from the ski room, with an inviting hot tub sitting right outside the door, perfect for easing sore muscles after a long day of skiing or hiking.

With Canby overseeing the interiors, the house is the result of a true collaboration; unique features that include concrete flooring, a built-in dining nook, a creatively partitioned bunkroom, and a stairwell that acts as a source of natural light throughout. The architects introduced interesting angles that give the home a dynamic edge. A garage with second-floor bedrooms is offset from the main volume, for instance, and in the home’s entryway, the interior wall angles away from the door to create a dramatic introduction to the panoramic views. 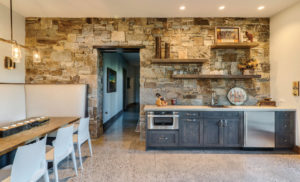 The lower level features a ski room with access to the outdoors, a bunk room, and a rec room with a wet bar, built-in dining, and a screening area. Concrete floors create a clean, contemporary aesthetic.

After building a home perfectly suited to their needs, the Canbys have experienced the logical result: Each year, they find themselves spending more and more time here. Both the climate and scenery provide a welcome contrast to their life in Texas, and their new home works well for visits from the extended family while representing the best of mountain living. But most of all, explains Canby, “We love the people in Montana. They’re relaxed, friendly, and always willing to help. Big Sky still has a small-town feeling. People leave their keys on the dashboard of their cars, and,” she adds, “when we first lived in Big Sky, we had an entire floor replaced on a gentleman’s handshake.”

Chase Reynolds Ewald has been writing about Western design, food, art, travel, craftsmanship, and rustic style for more than 25 years. Cabin Style, her tenth book (and fifth collaboration with photographer Audrey Hall), was released in August. Follow her on Instagram and subscribe to her blog at chasereynoldsewald.com.

Darby Ask is a long-time resident of Bozeman and a native Montanan. With a bachelors in photography from Montana State University, she has been a professional photographer for 10 years, focusing on interiors and architecture. Ask has spent the last 12 of her winters coaching snowboarding in the mountains near Bozeman, darbyask.com.